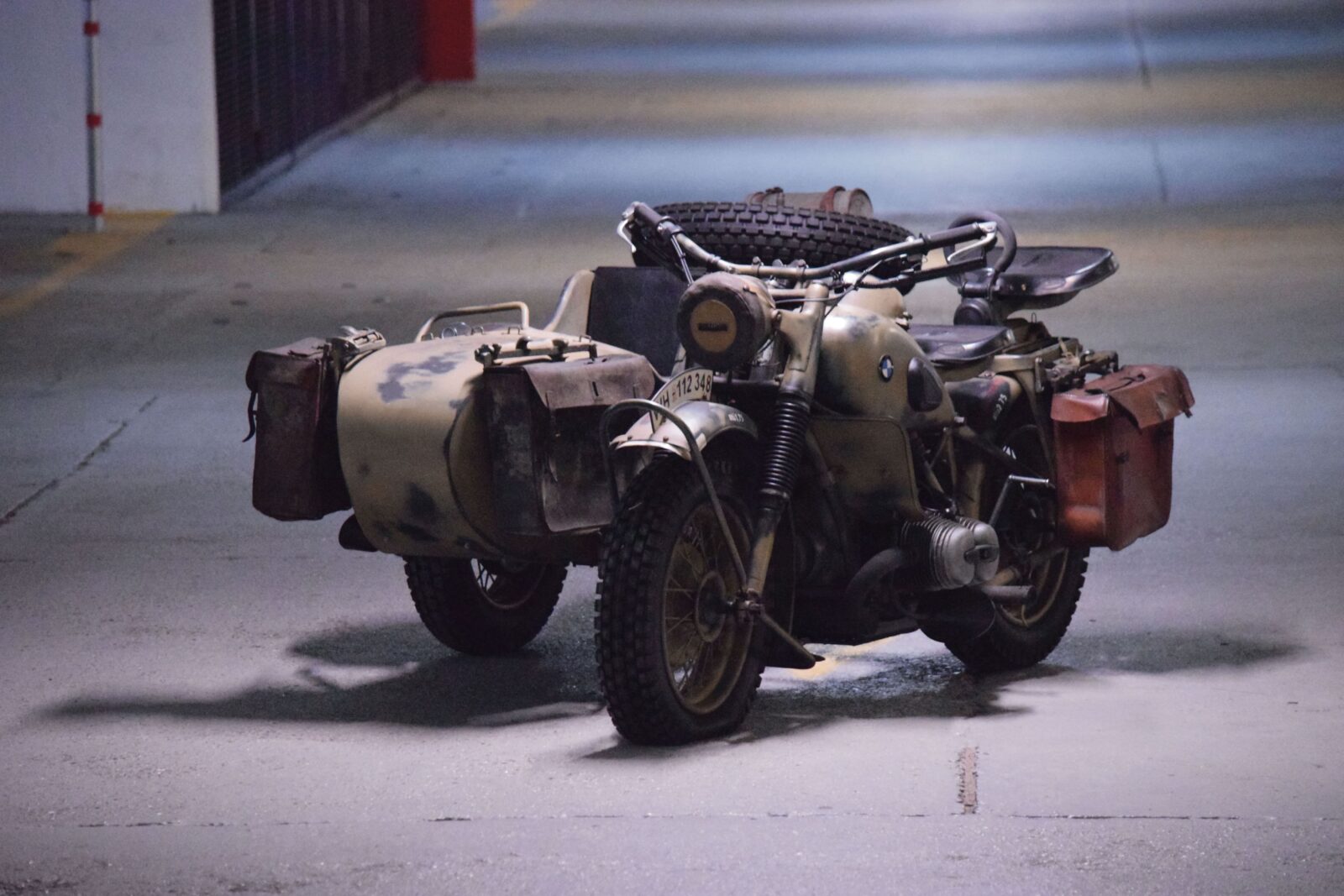 The BMW R75 and its sibling the Zündapp KS 750, were Germany’s equivalent to the American Jeep. Though it should be noted that the Kübelwagen could also be given that same title, and all three of these vehicles pre-dated the Willys Jeep.

The Arrival of the BMW R75

Both the BMW R75 and the Zündapp KS 750 were developed in the late 1930s to meet a requirement put forward by the German Wehrmacht (military) for a sidecar equipped motorcycle. 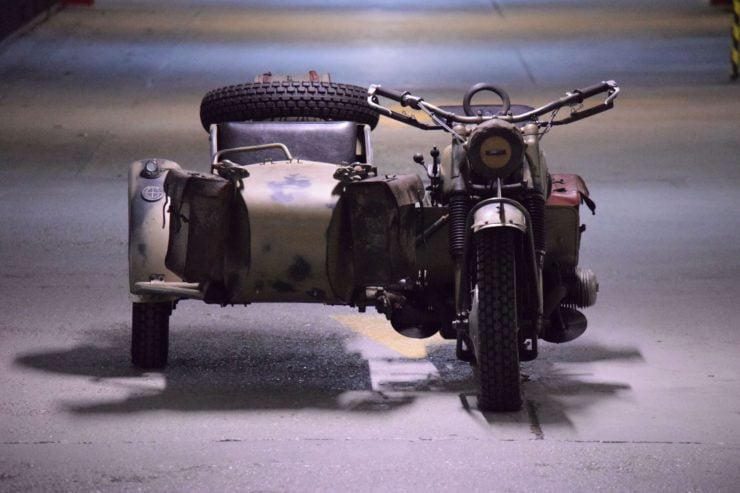 Interestingly the bikes also needed to be able to maintain a marching speed of 3.5 to 4 km/h (2+ mph) without overheating so they could accompany infantry who were underway on foot.

Both BMW and Zündapp met the requirements with their respective models, due to a number of factors not the least of which was its cheaper to produce stamped-steel frame, the Zündapp was chosen. BMW refused to accept defeat and managed to negotiate to build their own bike, the R75, but to pool resources with Zündapp and ensure that the two bikes would share approximately 70% of their components.

The BMW R75 is powered by a horizontally opposed, air-cooled, twin cylinder engine with a capacity of 745cc, 26 hp at 4,000 rpm, a compression ratio of 5.8:1, two valves per cylinder, and two carburettors. Power was sent back via a shaft to the rear wheel and a second transverse shaft sends power to the sidecar wheel giving full drive to both rear wheels.

Unusually for a motorcycle the R75 features twin gearboxes giving it the equivalent of high and low range. Gears are shifted using a traditional foot lever and there’s a hand lever on the side of the fuel tank to switch between road (strabe) and off road (gelande) gearboxes. The road gearbox has four forward gears and one reverse, and the off road box as three forward gears and on reverse.

The great benefit of this twin gearbox solution was that it gave the BMW R75 remarkable off road ability, thousands of them were deployed all over Europe including the thick mud of the Eastern Front, and the deep sands of the North African Sahara. For use in the icy climates of eastern Europe the R75 could also be fitted with heaters that circulated heat from the engine into the footwell and up to the handlebars. This feature likely saved more than a few Germans from getting frostbitten toes and fingers. 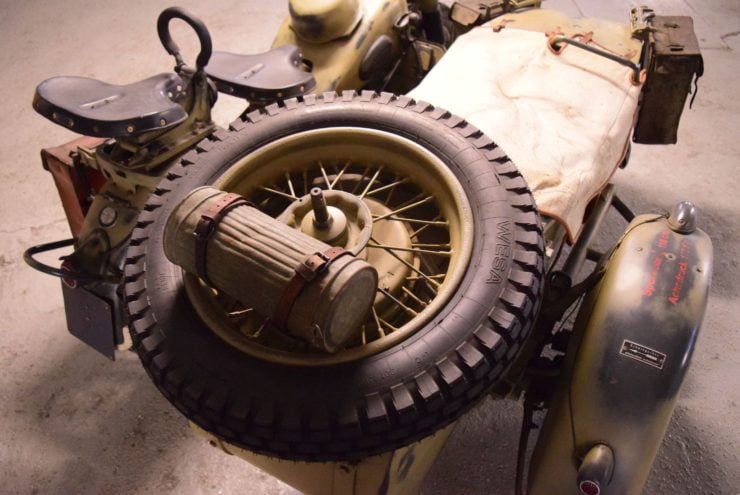 It’s believed that between 16,000 and 18,000 examples of the BMW R75 were built during the war until production stopped due to the main factory being bombed by the Allies in 1944. The engineering genius of the bike wasn’t lost on the Allies and both the Soviets and Americans put their own versions of the model into limited production after the war as part of reparations. The Soviets built approximately 98 of them in 1946 and Harley-Davidson built a very close replica called the Harley-Davidson XA.

The BMW R75 you see here was built in 1943, although its early history is lost it was doubtless used by the German military as they took 100% of the production with very few exceptions. It’s possible that this bike was used on the Eastern Front as it’s fitted with the sidecar and handlebar heaters designed to keep armed motorcycle troops from freezing to death in temperatures that could get as low as –30 °C (–22 °F) or lower, often accompanied by strong icy winds.

Although a lot of the history this bike lived through has been lost we do know that it likely lived in Italy for a time, and it benefits from an older restoration. The bike is matching numbers, with #765545 showing on both the engine and frame. If you’d like to read more about it or register to bid you can click here to visit the listing on Artcurial. 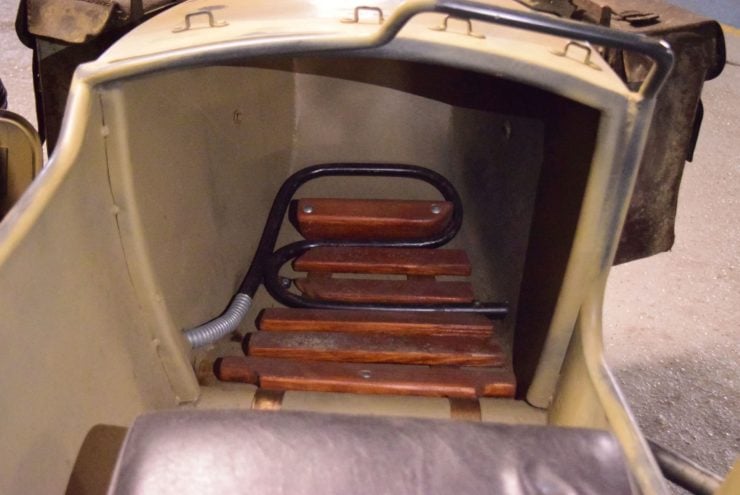 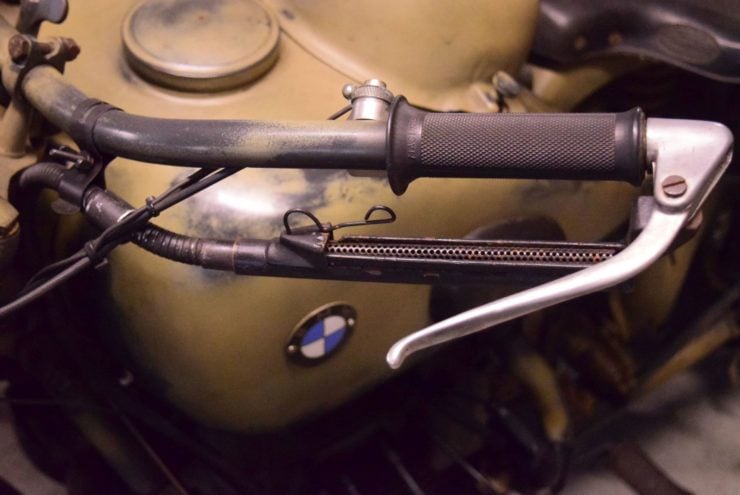 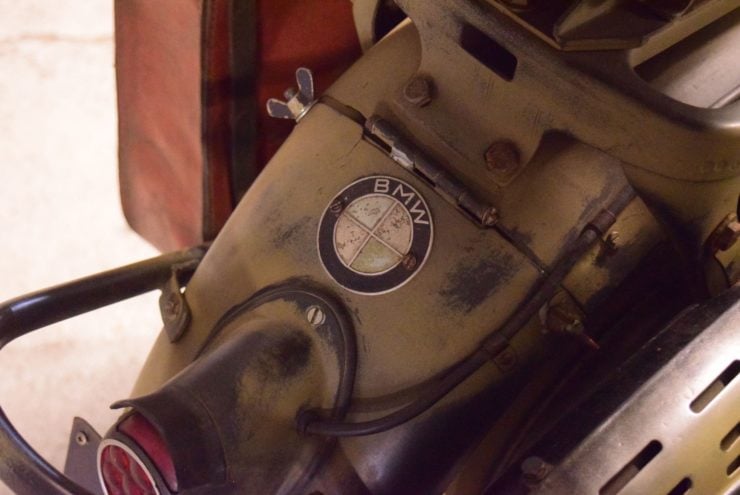 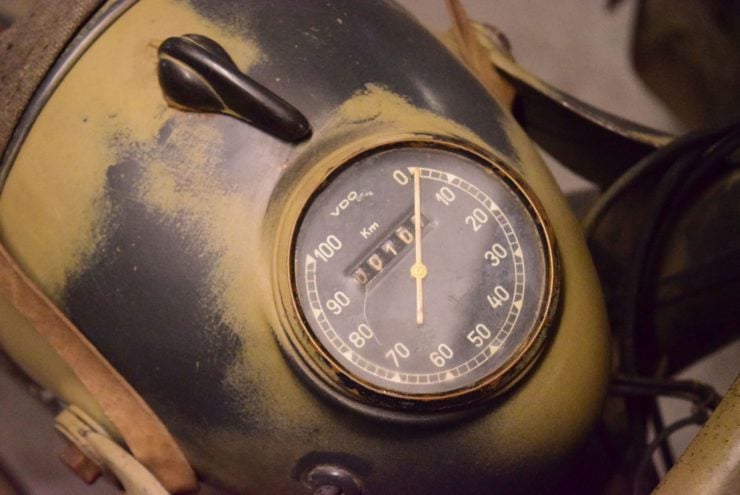 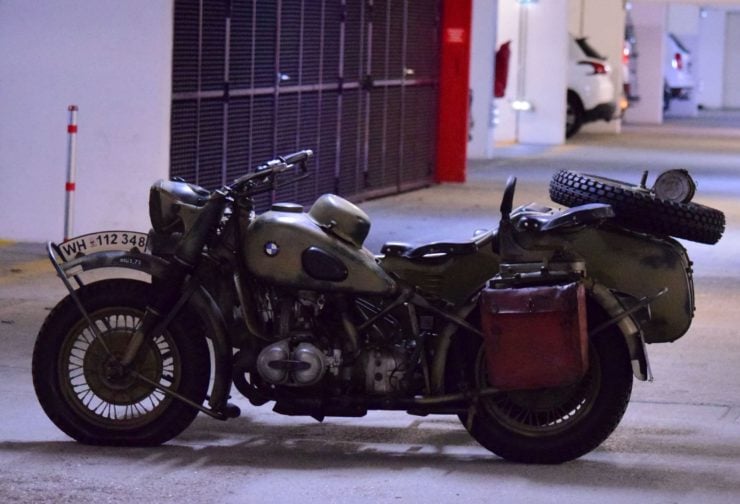 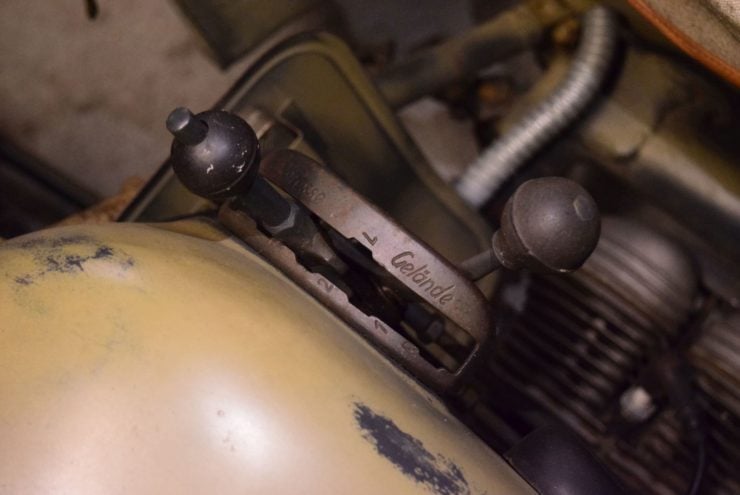 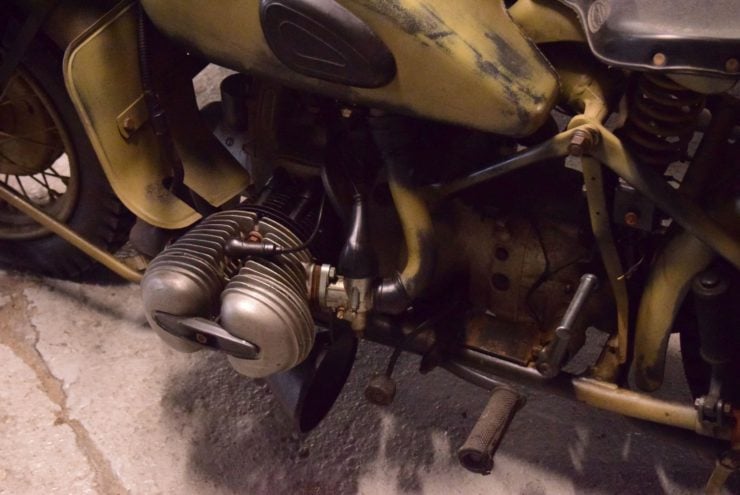 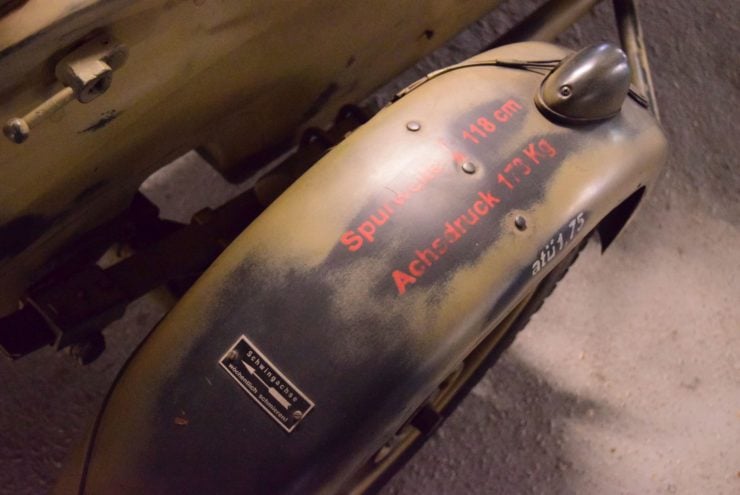 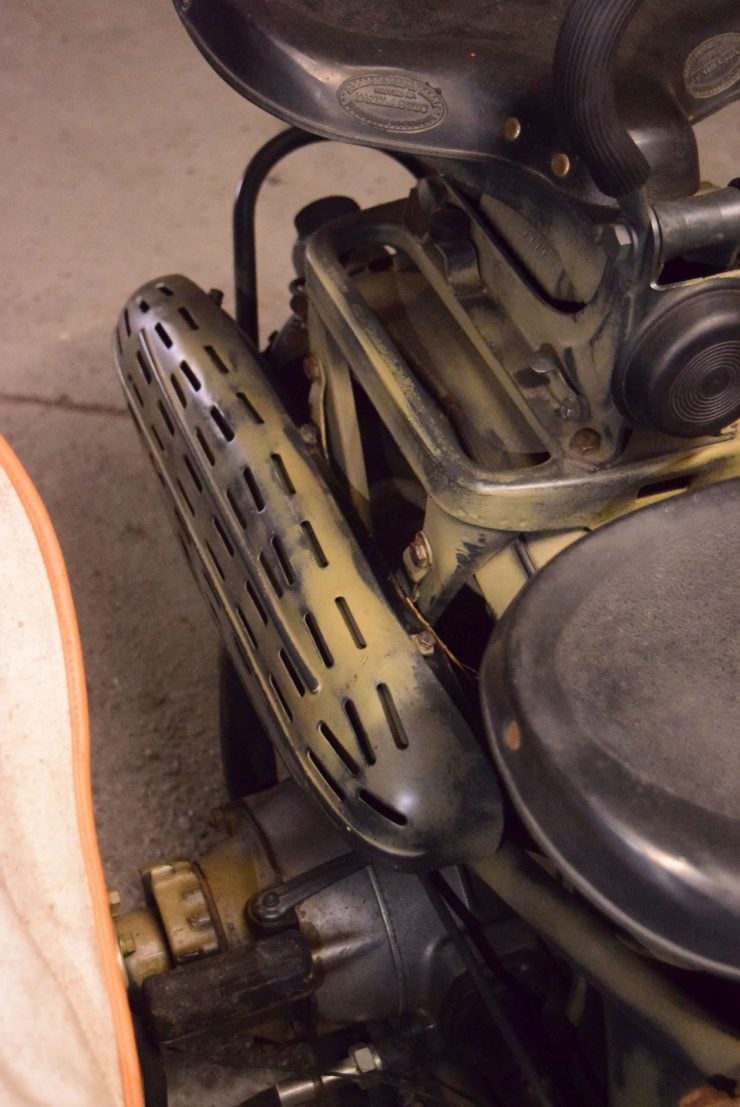 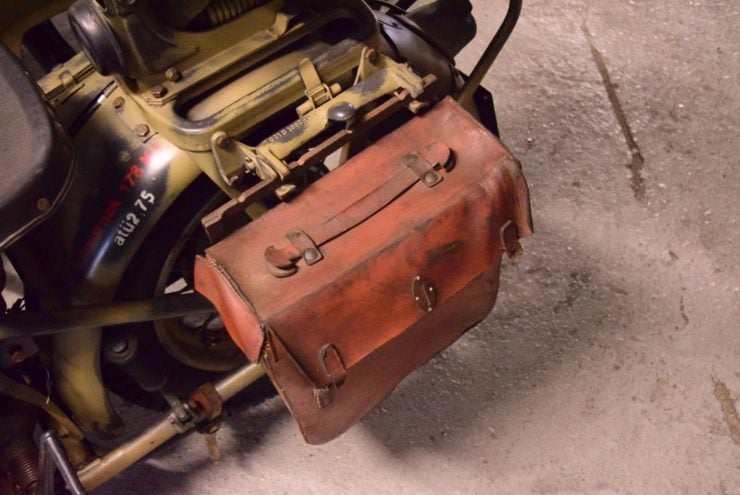 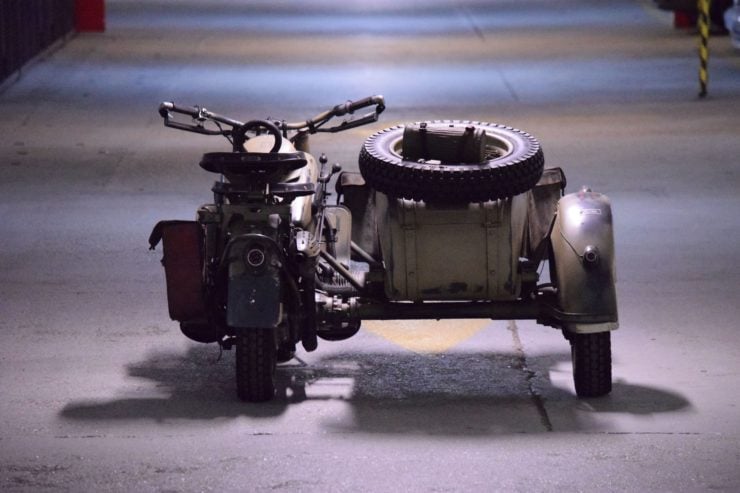 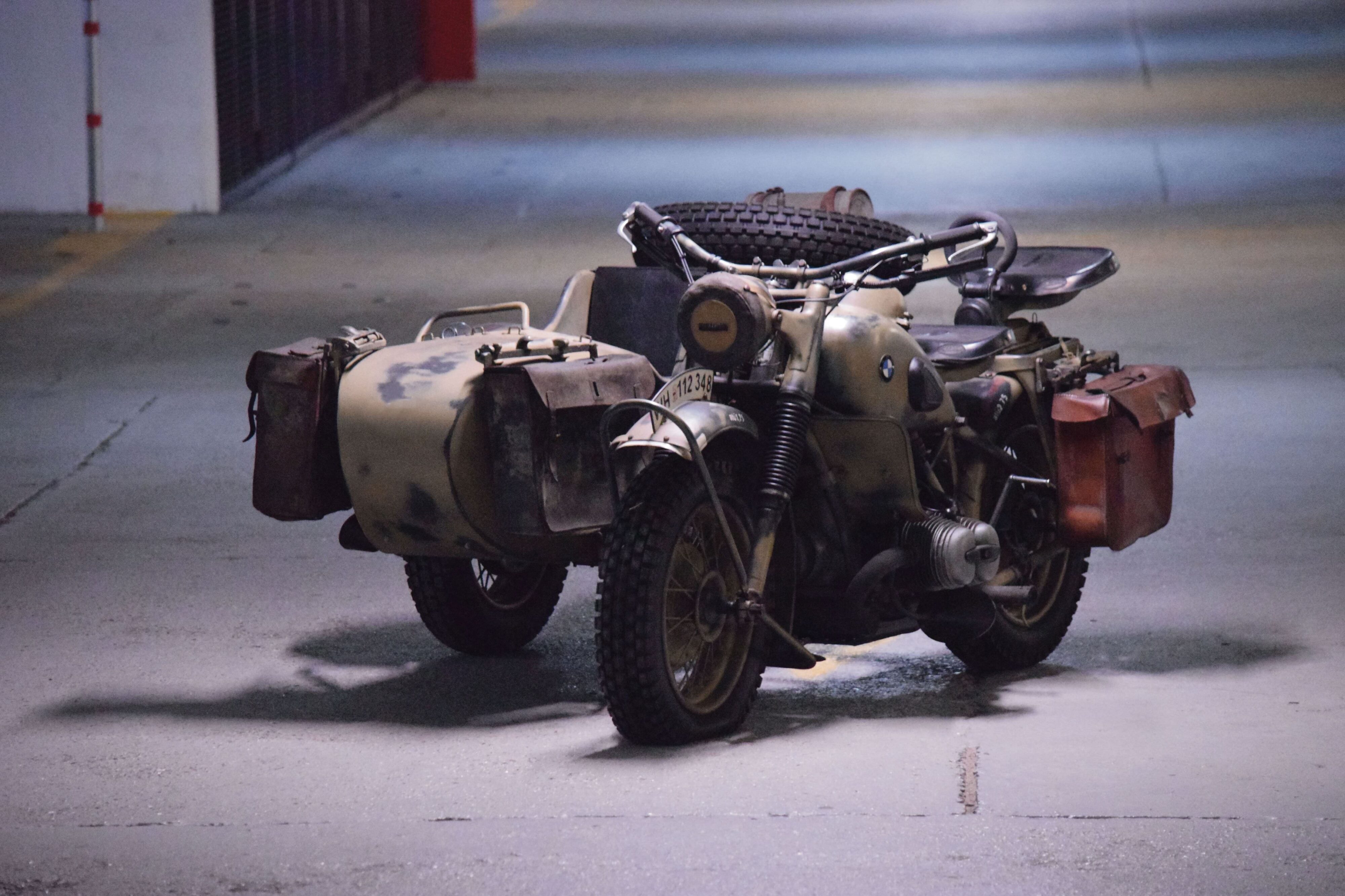