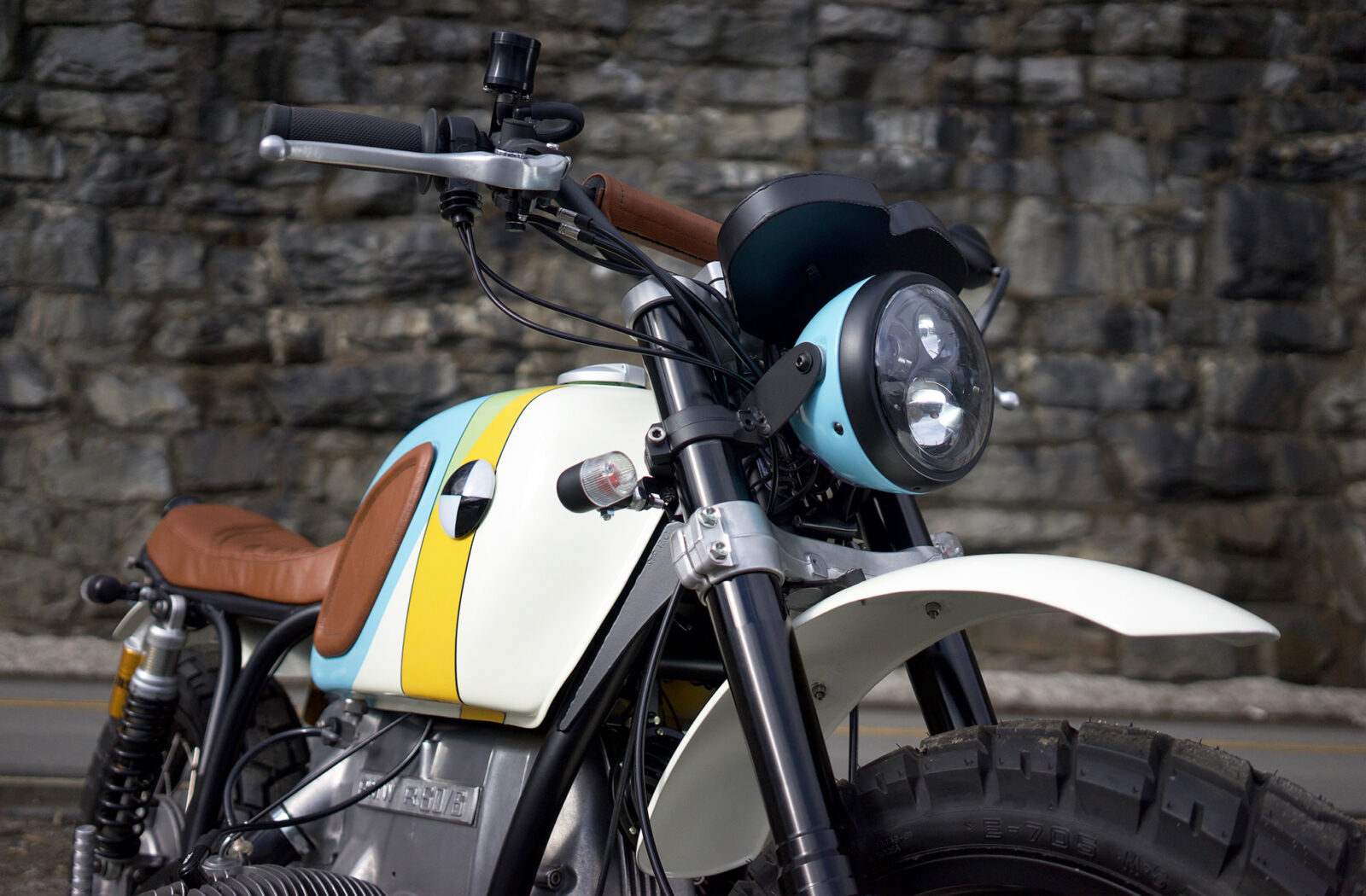 The BMW R60/6 made its first appearance in 1974 as part of the all-new /6 family of motorcycles by the German manufacturer. These new models replaced the outgoing /5 motorcycles but shared many of their components – BMW was onto a good thing with their horizontally-opposed air-cooled engines, and being somewhat cautious by nature they tend towards incremental improvement rather than blank-slate redesigns.

By the mid-1970s BMW had been building motorcycles with air-cooled boxer-twins for 53 years. The first had been a relatively simple machine with an engine developed from a reverse-engineered Douglas motor. Over the decades that followed BMW perfected the art of the horizontally-opposed twin, and the company is now only 4 years shy of their 100 year anniversary of building the engine that would become known as the “Airhead”. 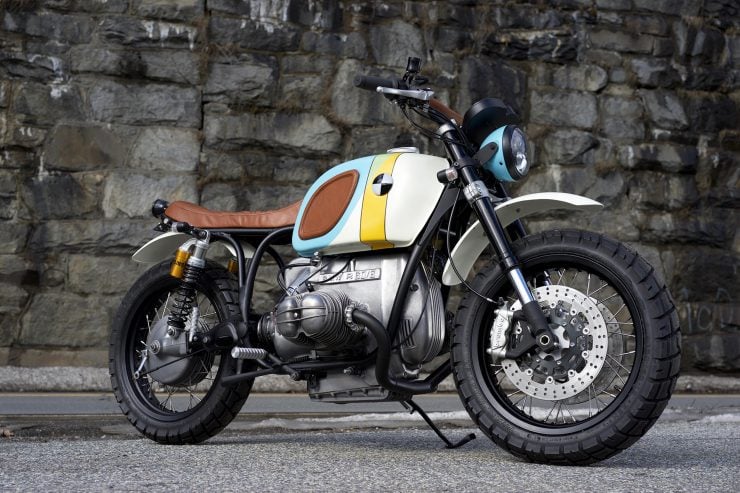 Although the R60/6 had the smallest engine of the /6 family it proved to be a popular middle weight motorcycle. Its 599cc twin produces 40 hp and 36 lbf.ft of torque, the top speed is 103 mph, and it’ll happily sit on 80 mph all day on the Autobahn.

The engine might have been a simple design, but it was very reliable, and many of them have survived to the modern day. All the /6 series motorcycles (and the /5 series too) have unit construction engines with a one-piece crankcase and a shaft drive to the rear hub, suspension is telescopic up front and twin shock at the rear, and the frame is not entirely dissimilar to the famous Norton Featherbed.

The “slash six” BMWs were built from 1974 till 1976 before being replaced with the “slash seven” series in 1977. Despite the relatively short production run there are still a lot of /6s on the road – and they can be picked up for reasonable money. They make excellent daily riders, and custom motorcycle builders around the world are drawn to them for their iconic engine shape, reliable nature, and huge aftermarkets parts availability.

Vintage Steele is a Vermont-based custom motorcycle workshop with a small team of dedicated wrenchers who’ve made a name for themselves over the past few years by building practical, daily-rideable custom motorcycles.

This build was a little special to the team at VS as it’s for a local resident of the town where the shop is based – Brattleboro in Vermont. When professional glassblower Josh Bernbaum came to VS he’d already done a fair bit of research online looking at other Airheads, he knew he needed a practical, daily rideable motorcycle and he wanted it to be scrambler-styled as he lives a little on the outskirts of the town up a winding dirt track. 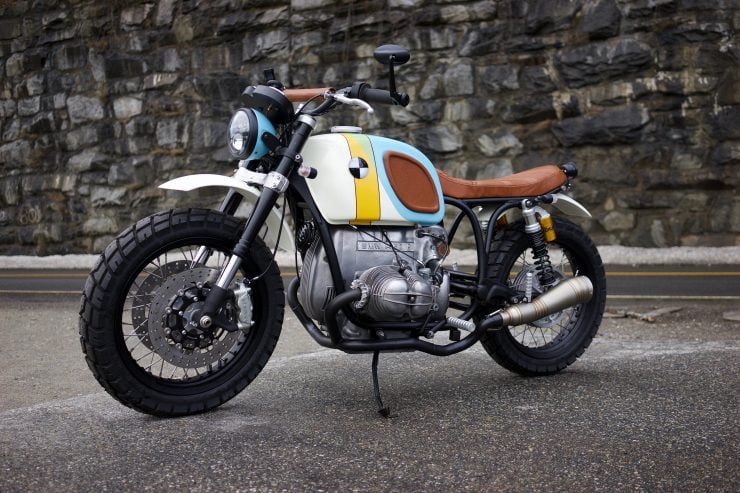 “Just like the goal for the rest of this project, when it came to the paint scheme I wanted to do something no one had really seen before. I’m a newbie when it comes to custom motorcycle concepts, but I’d been doing a lot of research in the past year while planning this project with the guys at V.S., and was inspired by many custom bikes I’d seen on the bike blogs and on Instagram but that also left me thinking there was room for something even more unique and original, especially when it came to paint and color choices. So I sought out the help of Christopher Myott, a buddy and wonderful fine-art painter in Jaffery, New Hampshire who happens to be friends with the crew of V.S. also. Chris Myott does a lot of motorcycle-themed artwork, and I like his color choices, so I asked him to sit down one morning when we sketched out the tank and color scheme of the bike on an iPad program he had and then we sent it to Pat who is V.S. painter. After some griping and head-scratching about technical stuff, Pat did a great job translating Chris and my design to the physical tank.” – Bike owner Josh Bernbaum

In order to make the bike handle (and stop) as well as possible it was decided to replace the front end with the forks, hub, and brakes from a 2011 Suzuki GSXR 600. The rear subframe was modified to adjust rear suspension geometry and a pair of new Öhlins piggyback shocks were fitted. An entirely new wiring loom was used, with an LED headlight, and a pair of new gauges including a GPS speedometer – an increasingly popular choice for custom motorcycle builds.

“Since we set out to do a bike that’s as unique as possible, and since I make blown glass professionally, owner of V.S., Josh Steele, recommended I start thinking about a way to incorporate some glass into the bike’s design. I put it off for a while but then the thought came to mind to do something for a custom emblem. At first we ground, polished, and glued clear glass I made by hand to some stock BMW roundels to go on the sides of the tank, but after trying one other design option we all agreed that the second idea looked just a bit extra special and unusual and went with that option which consists of the same clear glass “domes” I made that I then adhered to black and white sheet glass pieces behind it. Everyone knows it’s a BMW already, so we all thought this design we went with that only subtly referenced the traditional BMW logo but in black and white and clear glass was the way to go. This was the last piece of the puzzle, and I think we all really feel this personalizes and customizes the bike to a degree even greater than what we already had achieved with the paint scheme, leather, and other design choices.”  – Bike owner Josh Bernbaum

The bike is now tucked away in the garage of its new owner, and it’ll be used everyday till the winter weather rolls around. If you’d like to see more from Vintage Steele you can click the links below, or take a look at Christopher or Josh’s Instagram below that. 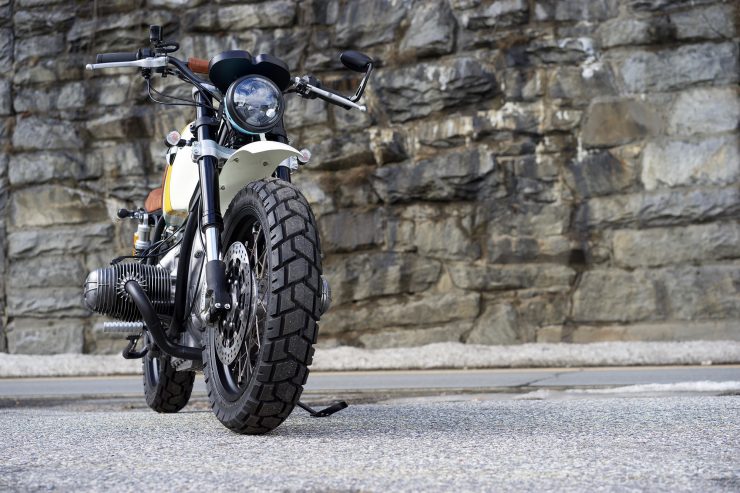 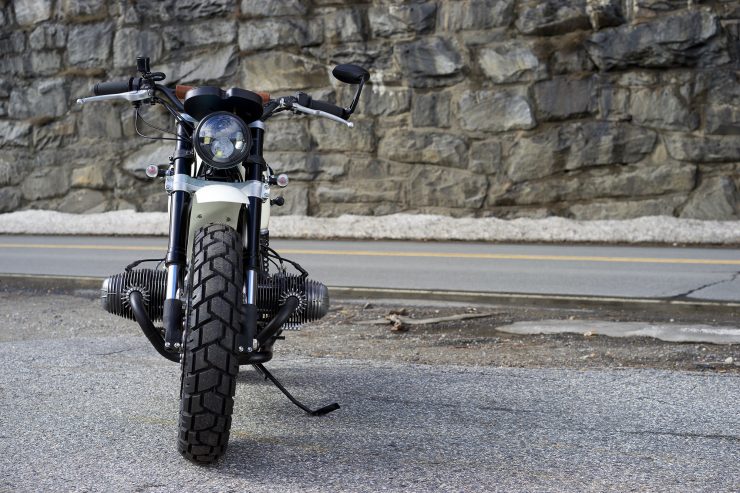 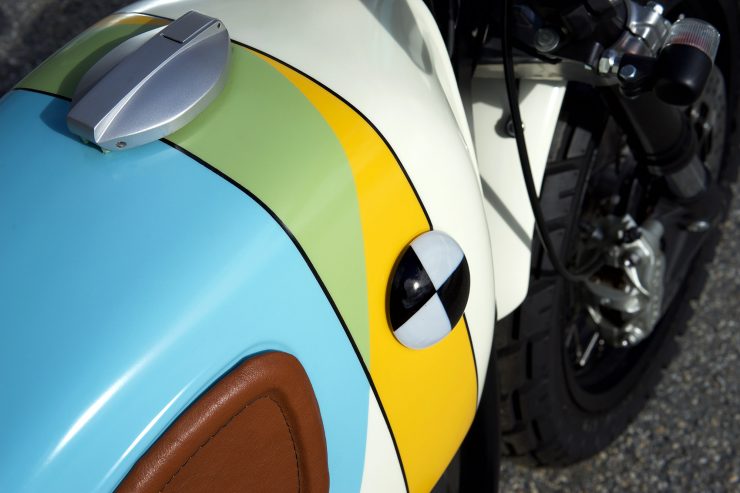 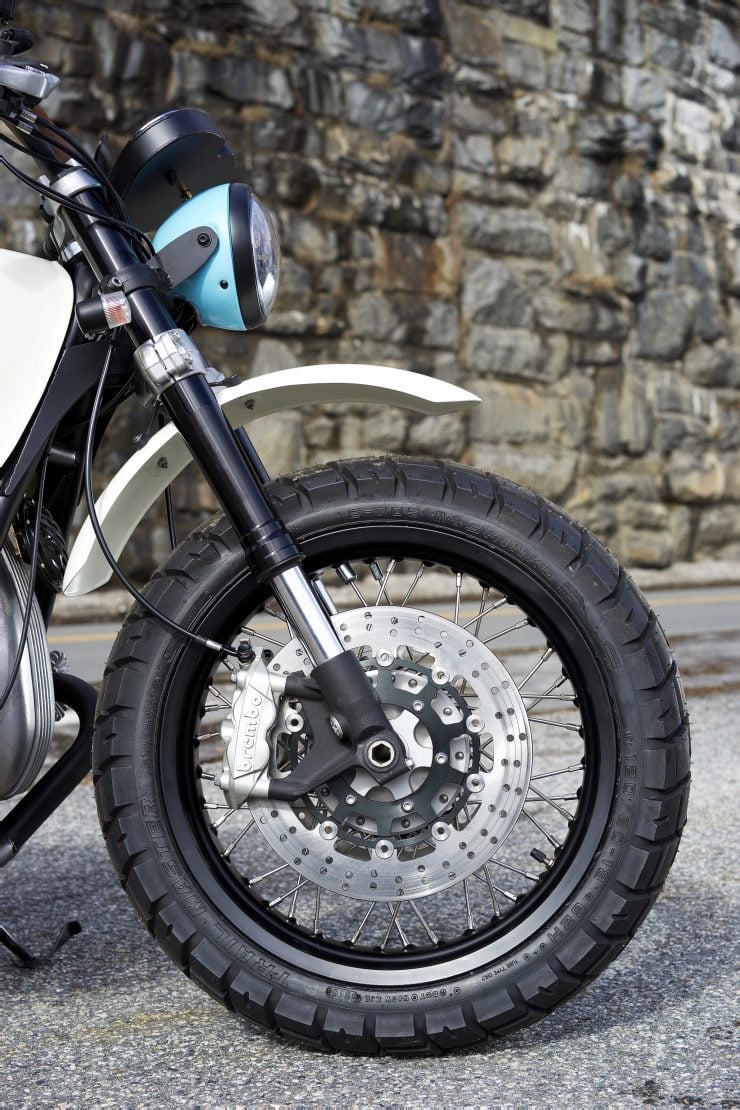 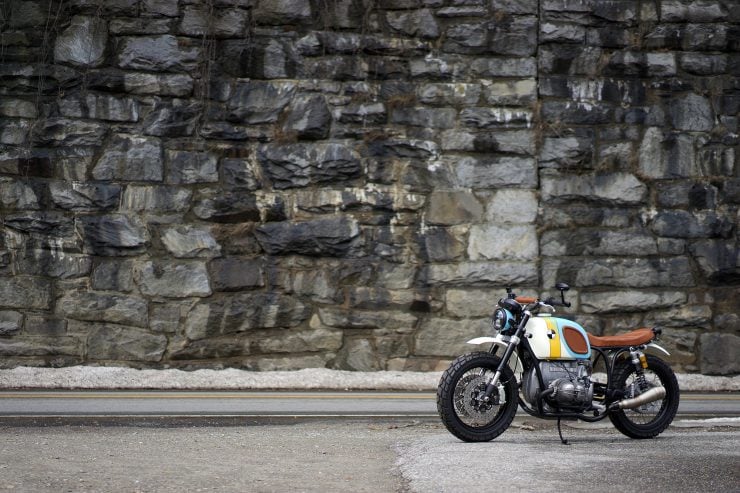 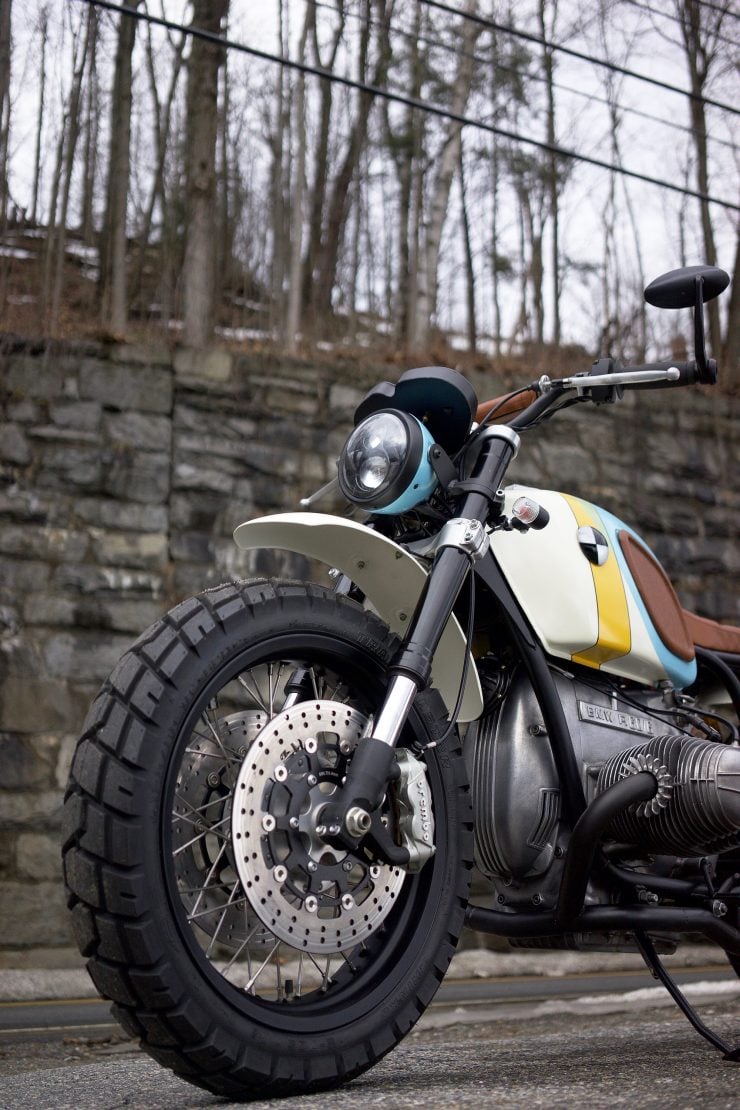 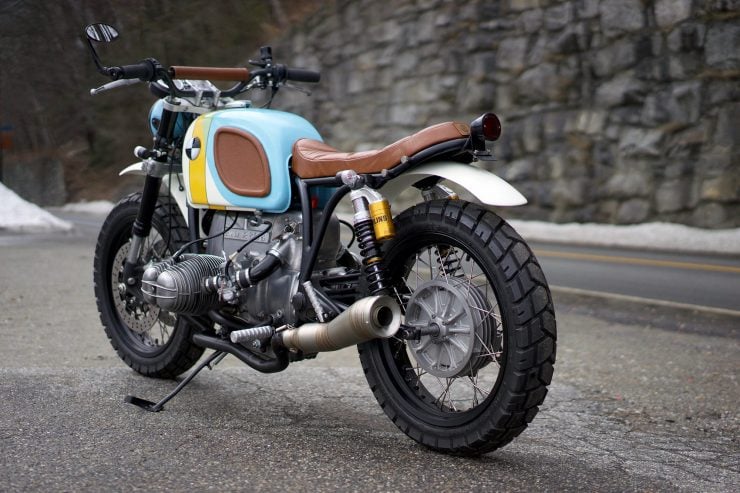 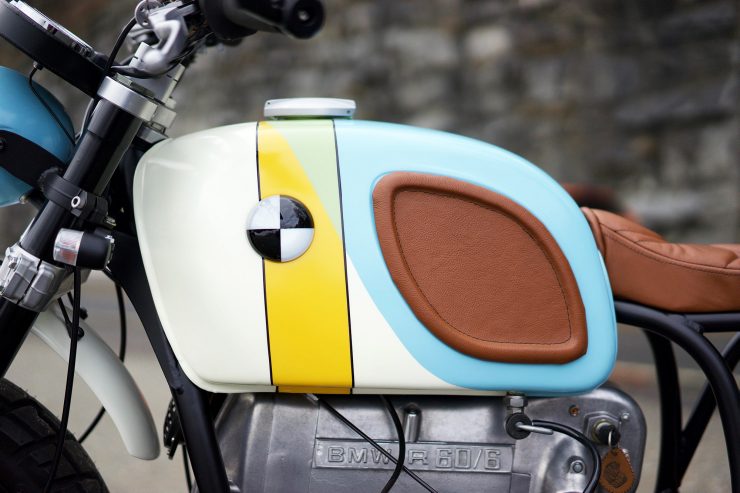 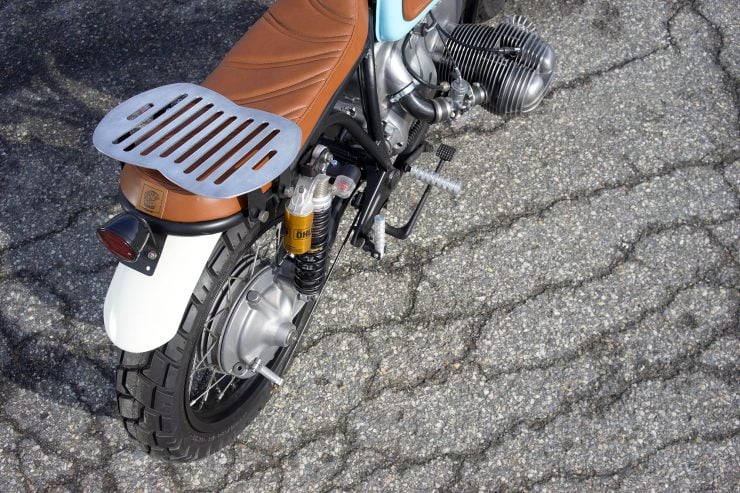 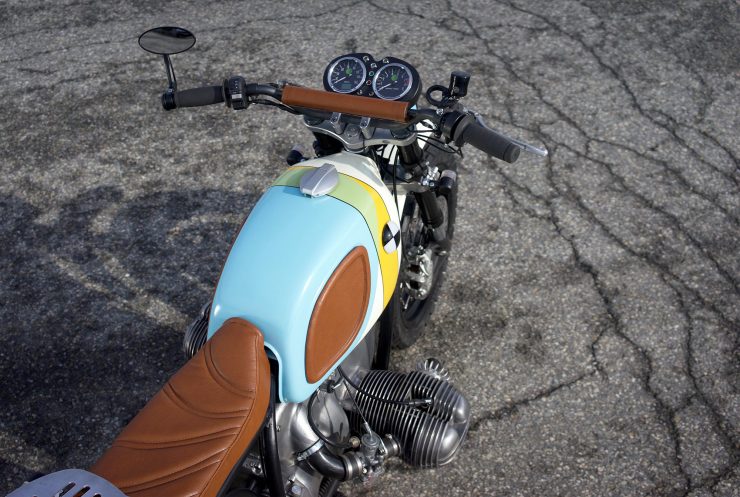 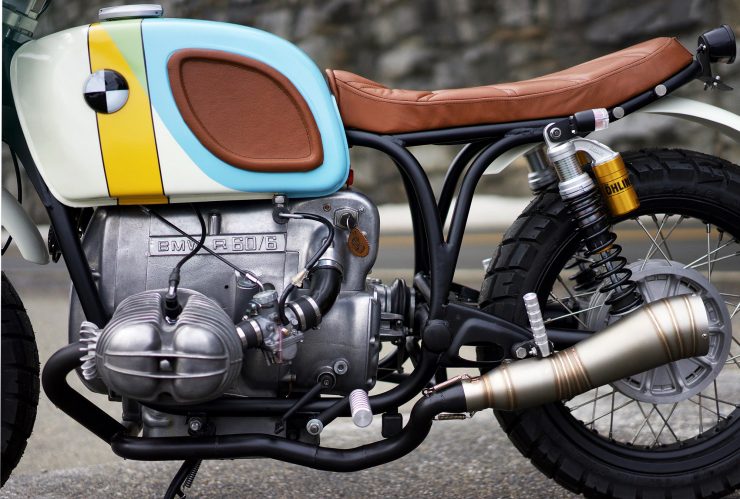 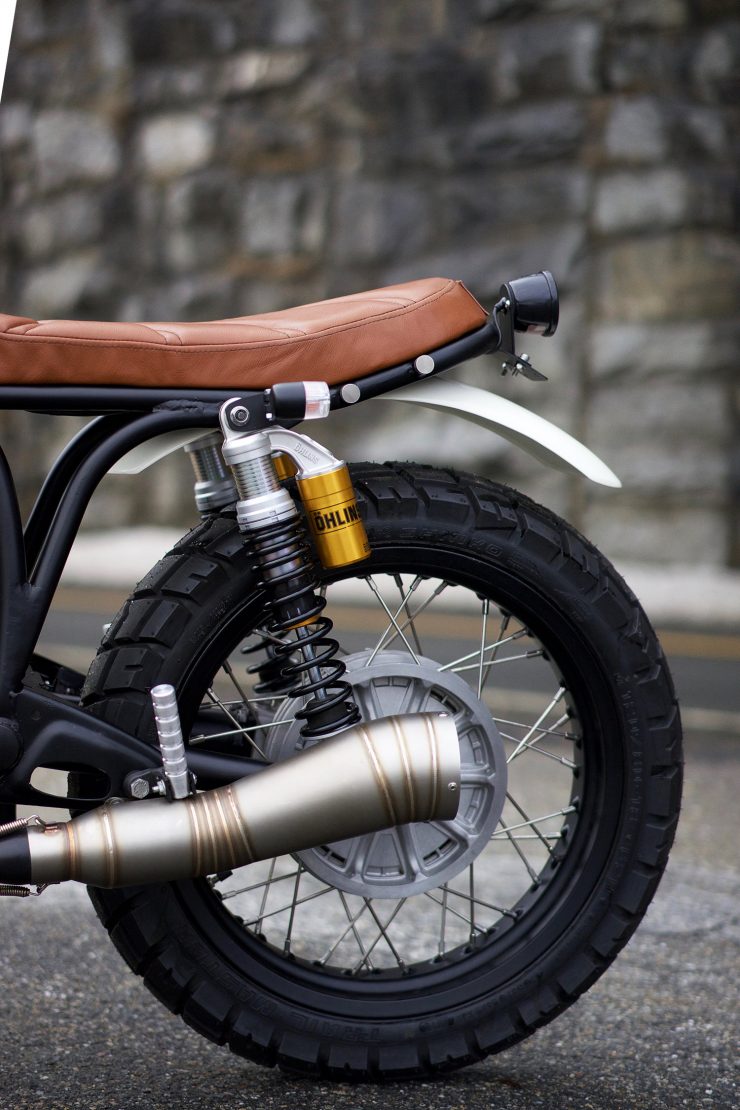 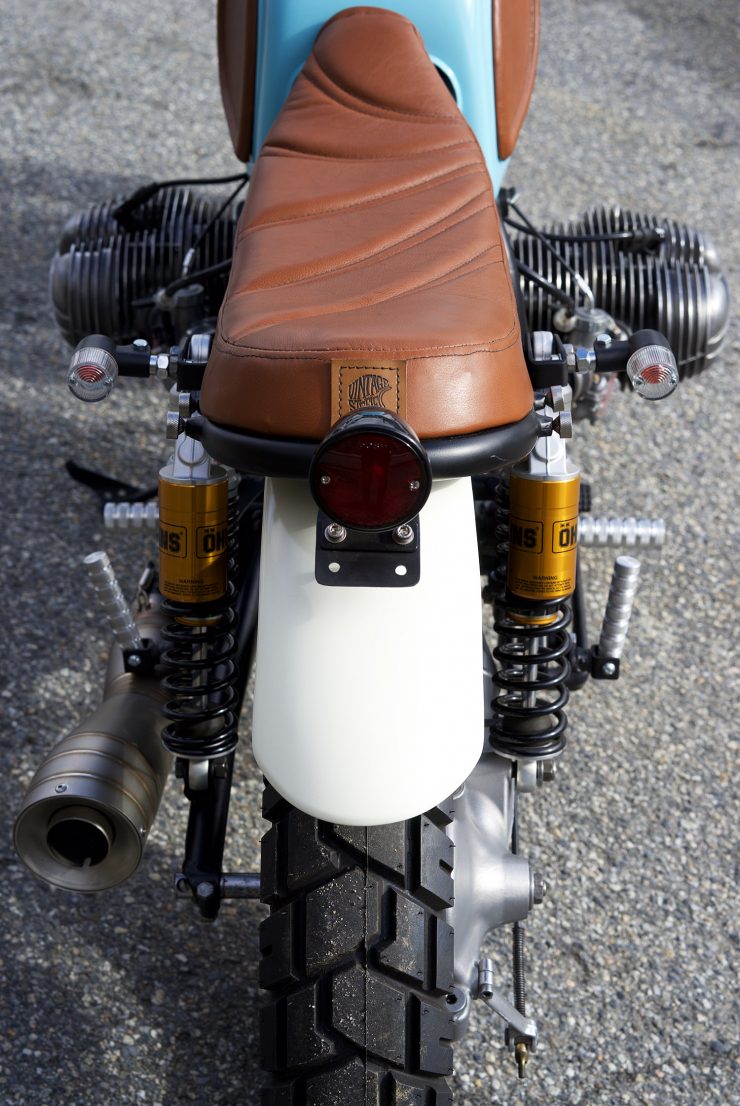 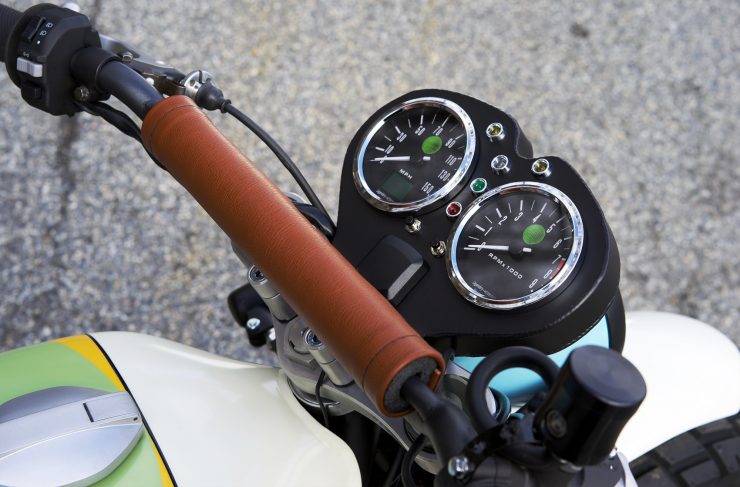 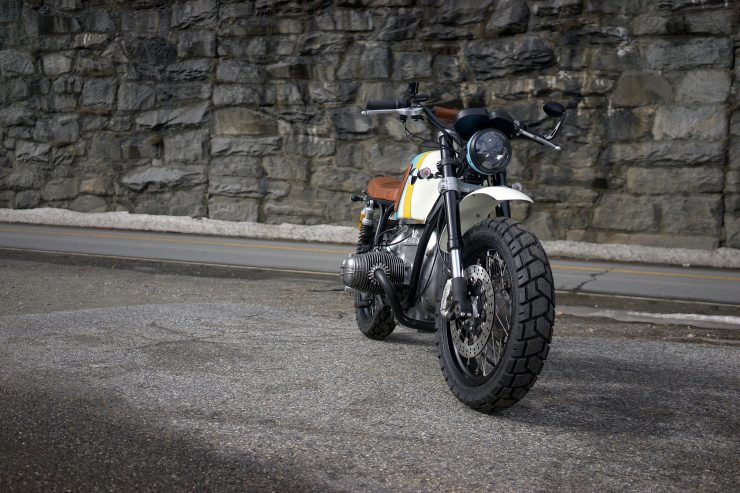 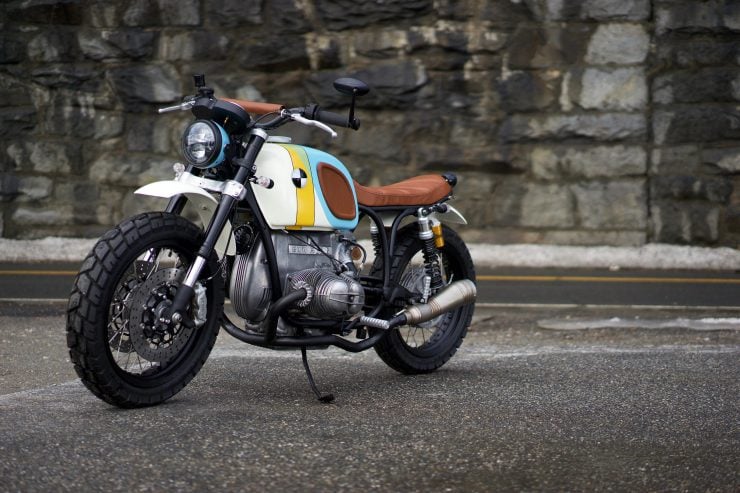 All images courtesy of Josh Steele