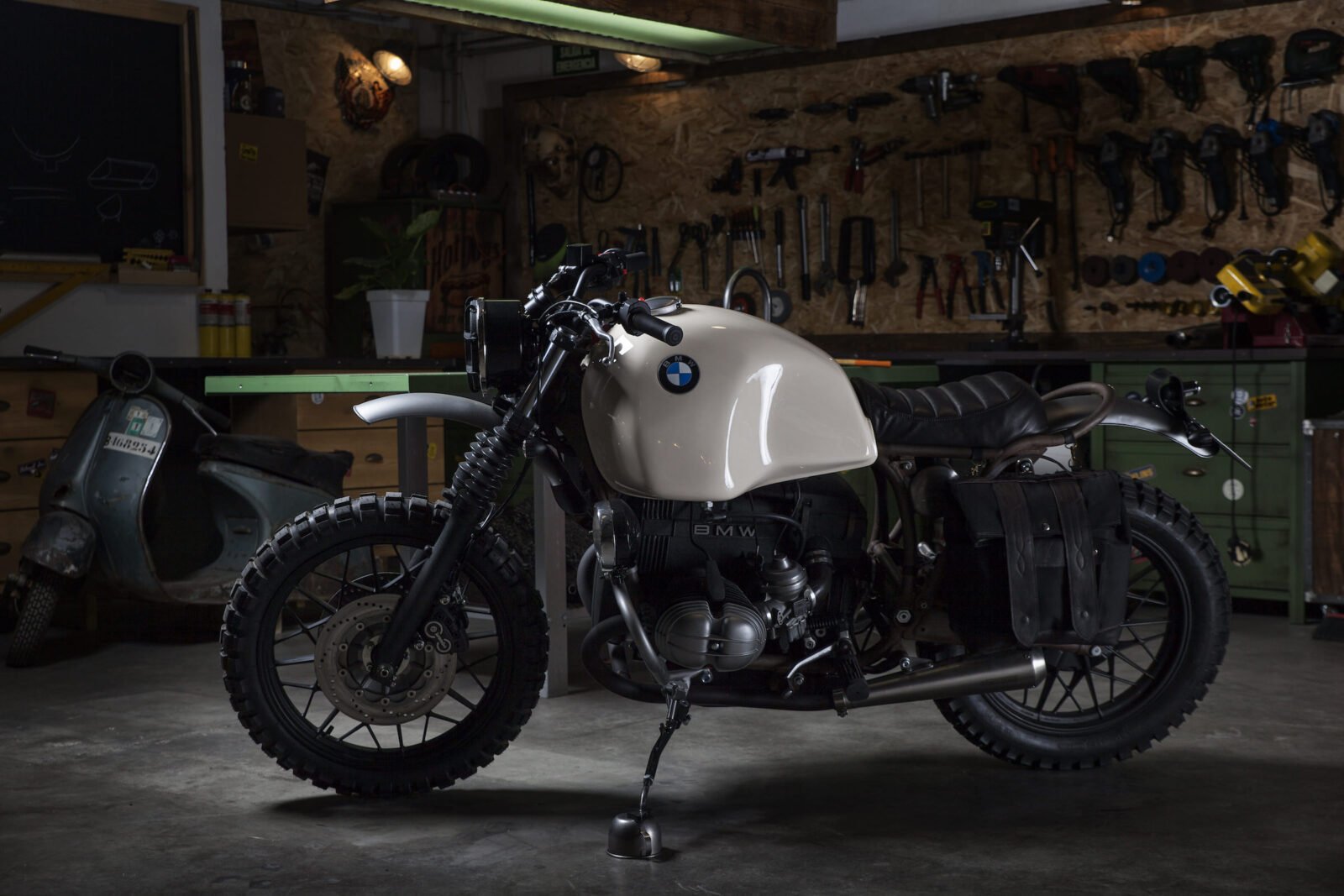 UFO Garage was founded by Efraon Triana Lopez, one of the founders of both Cafe Racer Dreams and Pan Speed Shop, as a way to work independently and build custom motorcycles 100% to his own specifications.

A native born son of Venezuela, Efraon left his home country at the age of 13 with his family and spent the next 10 years traveling. They lived in 9 different countries and Efraon became both an illustrator and a chef, before turning his attention to motorcycles.

Since founding UFO, Efraon has taken on two team members – Marcos and Ruben. Together they build a wide variety of custom motorcycles. When they aren’t doing that they hold Clandestine Dinners for carefully selected guests where wine-paired haute cuisine is prepared by top chefs and served on fine china atop white linen table cloths. When asked how long the dinners last, Efraon just wryly says “as long as the body endures”. 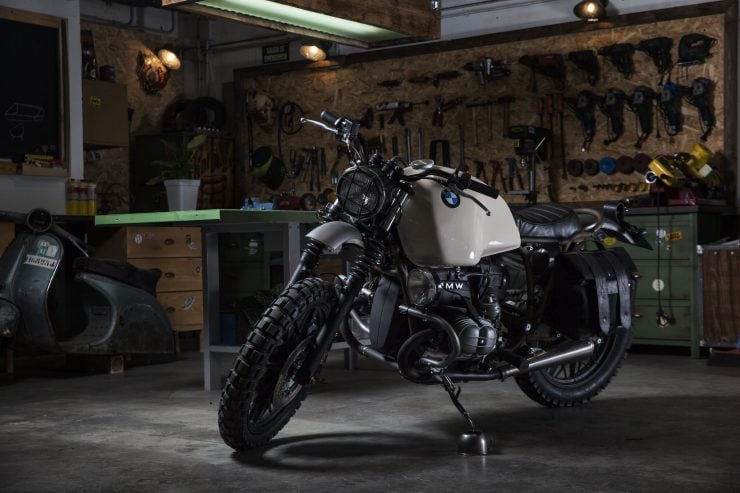 The BMW R100 RS you see here is the latest creation from UFO Garage, it’s a comprehensive rebuild that takes the continent-touring R100 RS and turns it into a Sahara-crossing desert sled.

The BMW R100 RS was originally released in 1977, it was characterized by its handsome seven-piece, frame-mounted fairing that had been designed in a wind tunnel by Hans Muth. It was powered by the venerable horizontally-opposed twin cylinder BMW engine with a capacity of 980cc and 70 hp, this was mated to a 5-speed gearbox, which sends power to the rear wheel via a maintenance free shaft drive.

Thanks to both the slippery fairing and the powerful (for the era) engine, the BMW R100 RS was capable of a top speed of 125 mph and a comfortable cruising speed of 100 mph – that latter figure being a game-changer for long range touring.

The R100 RS would eventually be replaced by the K-series of inline-4s from BMW, but it’s remained a beloved favorite among the BMW faithful, and well-preserved or restored examples now change hands for increasing sums.

One use that the original designers of the model probably never foresaw was the conversion for off-road use. In order to safely mount the fairing to the frame, the frame was strengthened substantially, this had the added benefit of making it tough as nails and ideal for the rigors of off-road use.

The classic horizontally-opposed BMW twin would prove itself by winning the Paris-Dakar Rally, so the combination of the engine and frame, with the enclosed shaft drive, make the bike an ideal contender for use on dirt. 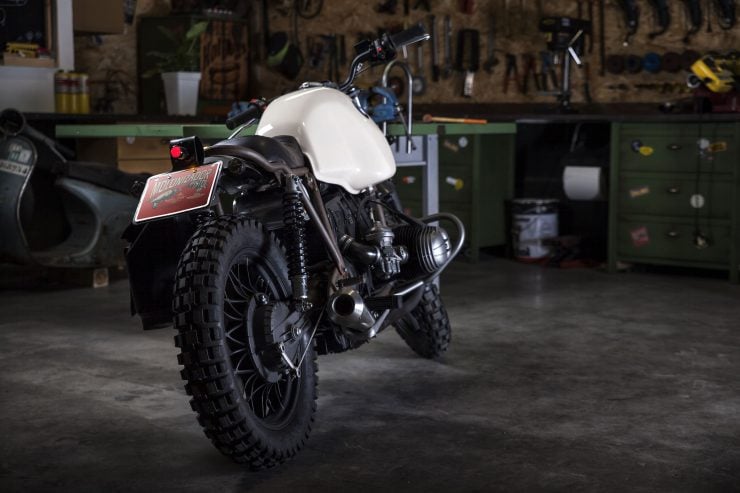 Once the R100 RS arrived at the UFO Garage it was partially disassembled to expose the frame and engine before a plan was formulated. Efraon wanted an dual sport motorcycle that looked like it had been built to rub shoulders with the original Paris-Dakar winning BMW R80 GS in the early ’80s.

The original fairing and fuel tank were put to one side and a new higher-capacity R80 GS-style tank was sourced. They realized that the original front end wasn’t up to snuff so they swapped it out for the front end from a K-series BMW with twin discs, and better forks.

The original frame was taken back to bare metal and allowed to pick up a thin layer of surface rust, before it was lightly sanded and sprayed with a matte clear coat to seal it. A new Renthal handlebar was fitted with new grips and levers, and a pair of new shock absorbers were fitted in the rear to lift the bike a little for some additional ground clearance.

The build was finished off with twin crasher-bars mounted to the frame, a new seat, a new headlight with a protective grill was installed, and a new sand/mud fender was fitted up front. The completed bike looks like exactly the sort of BMW you’d want for exploring forest trails and old dirt roads.

If you’d like to read more about UFO Garage or commission them to build you your own bike, you can click here to visit their website. 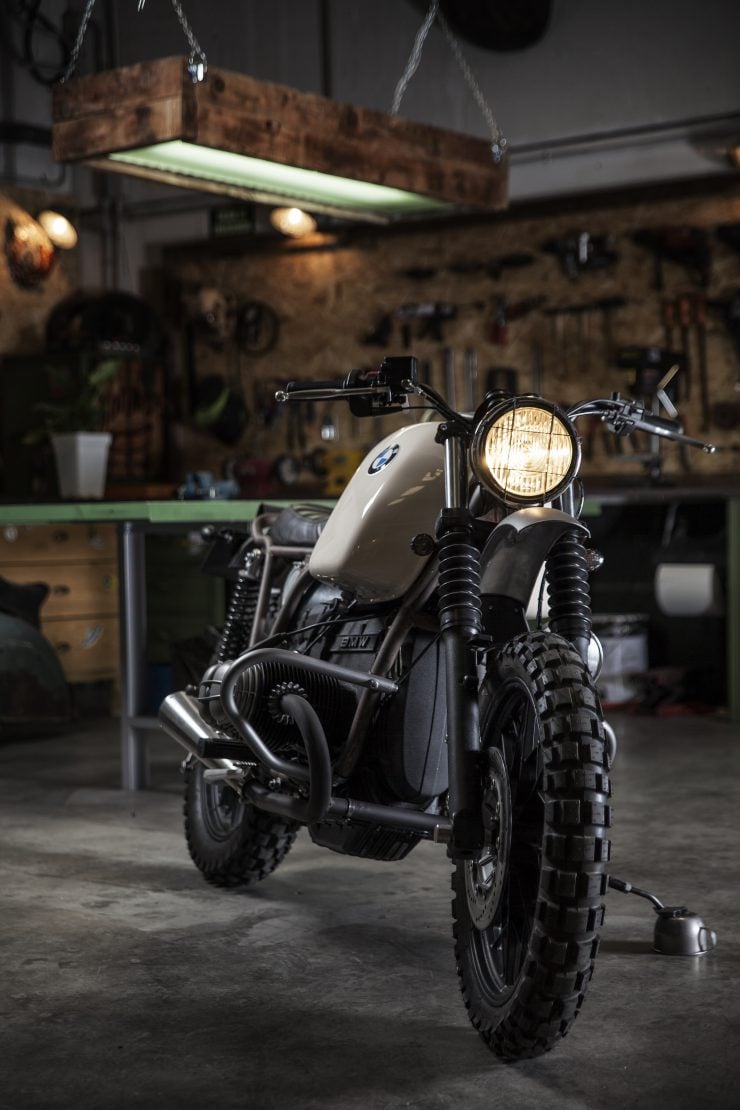 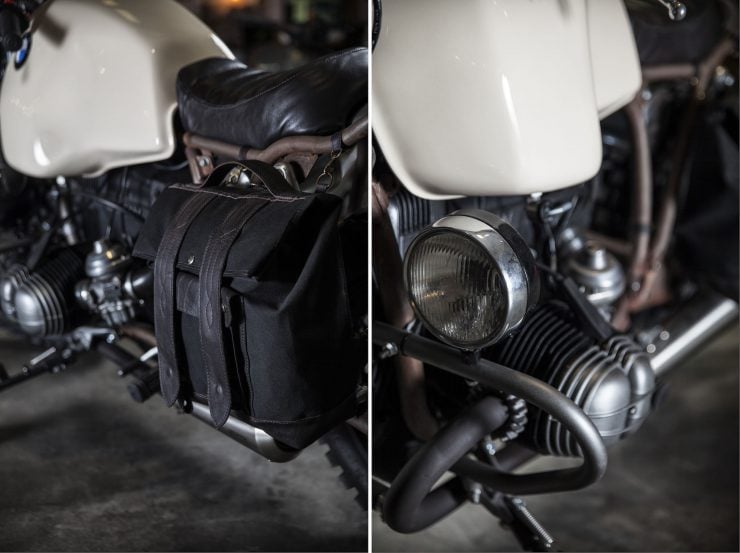 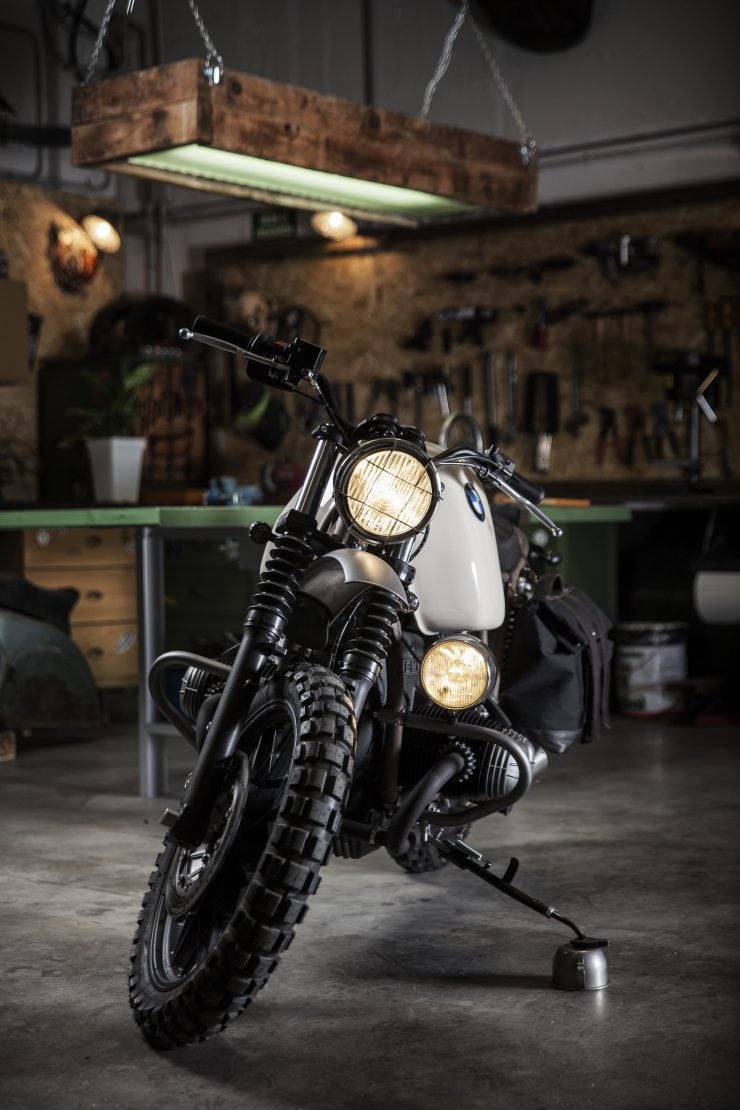 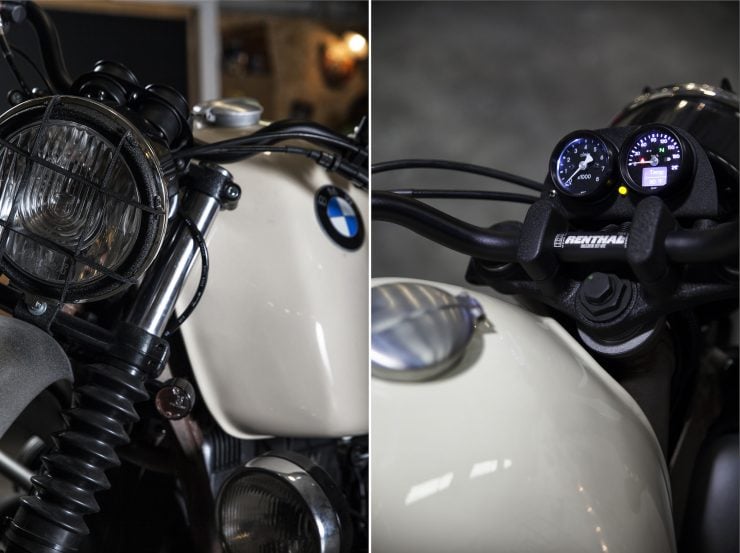 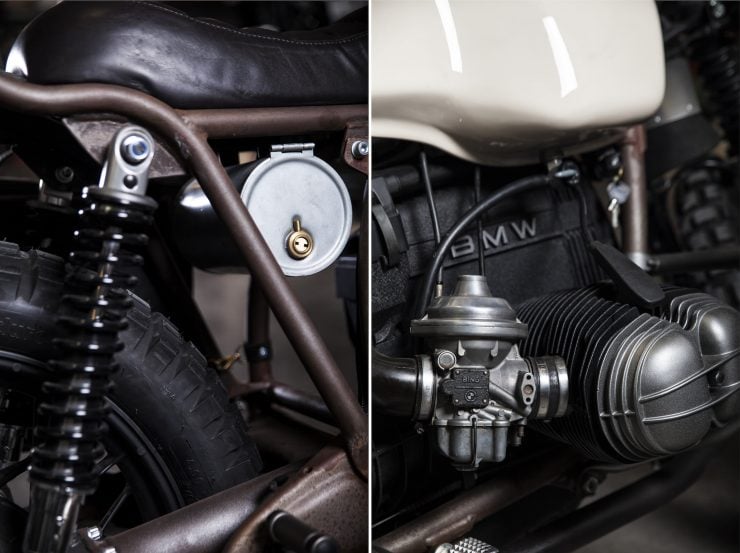 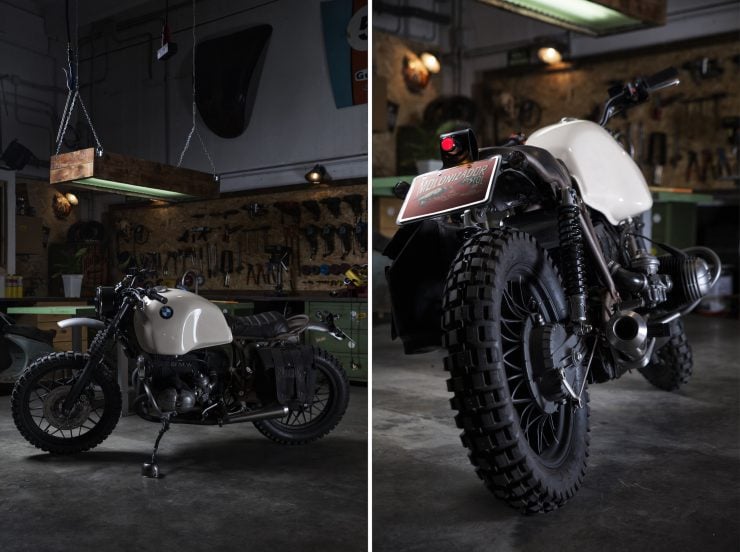 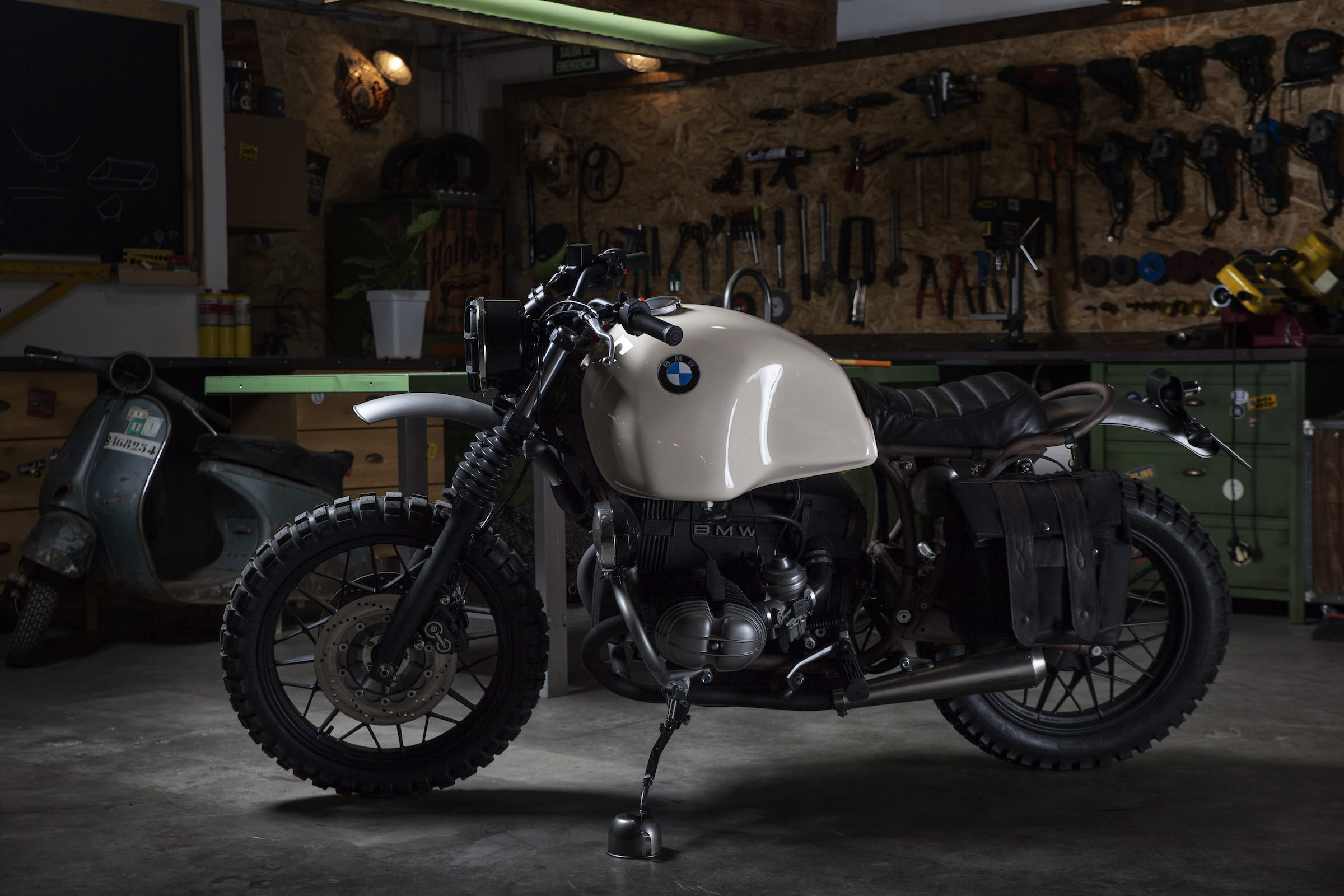