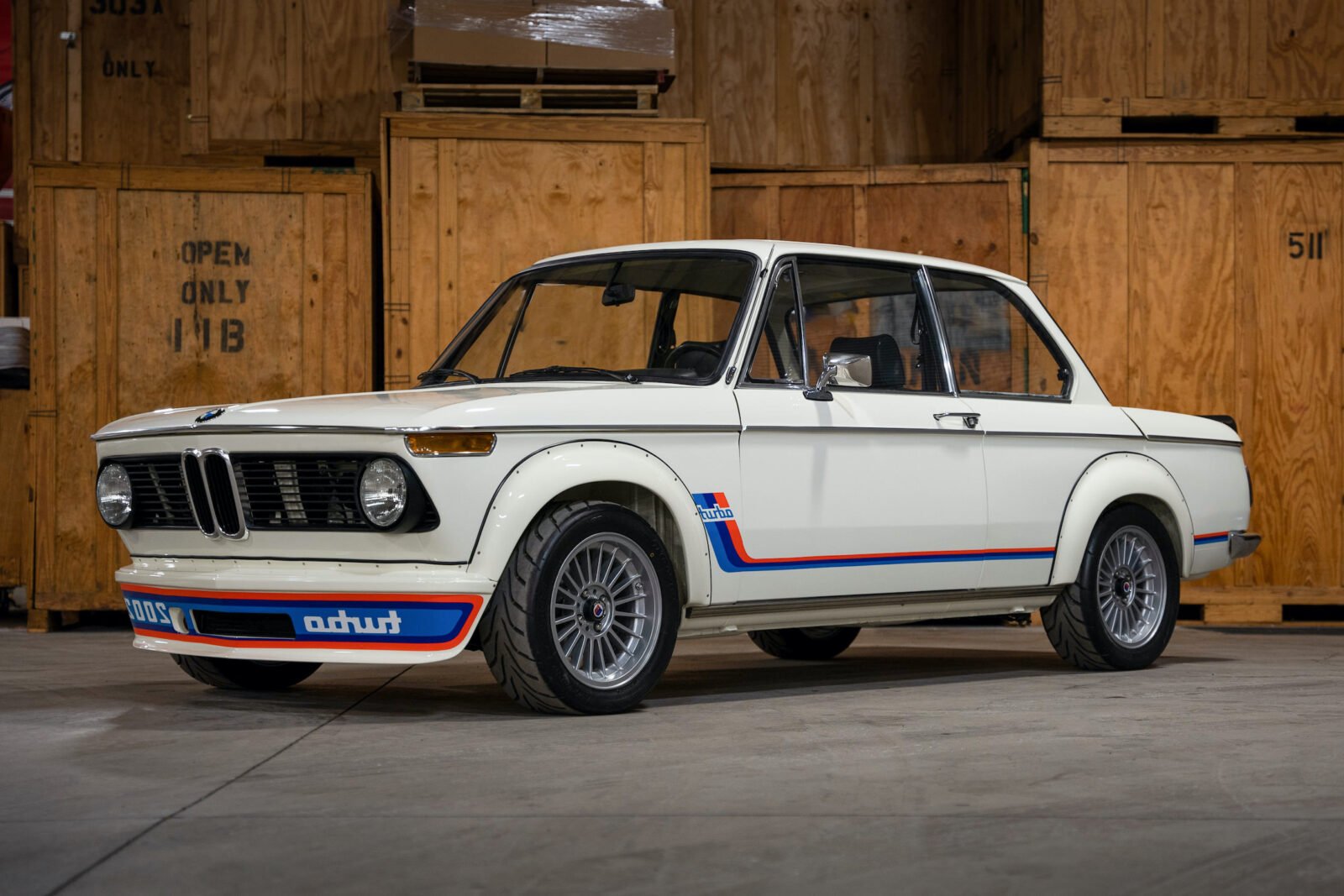 The BMW 2002 Turbo was the fastest and most desirable version of what was arguably the Bavarian automakers most important fast saloon car – The BMW 2002.

The fundamental design ethos of the BMW 2002 would lay the foundation for the company and help establish its reputation for building “driver’s cars” that extends all the way to the modern day.

The great secret to the enduring success of the 2002 is the fact that it’s essentially two cars in one – you get a standard looking three box car with seating for four adults and trunk space, but under the skin this sensible looking vehicle is actually a sports car with excellent handling and plenty of power (by the standards of the day). 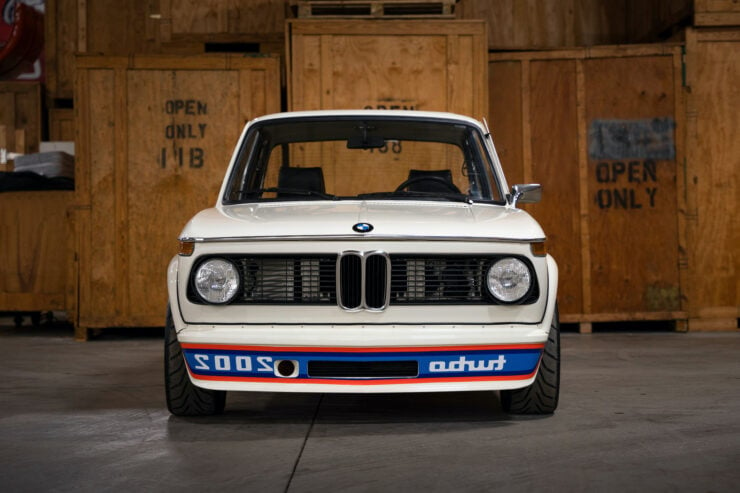 Above Image: The bodykit on the 2002 Turbo proved controversial, particularly the reversed “Turbo 2002” text on the front air dam.

This combination of practicality and fun perfectly suited the needs of many, particularly businesspeople and parents who needed a respectable daily driver that was also a little bit fun. This basic philosophy of vehicle design has stood BMW in good stead over the decades, with vehicles like the E30 M3 and more recently the M4 and the M2.

When the BMW 2002 was first released in 1968 it proved immediately popular both with the motoring press and the general public who bought them in droves. The early single-carburetor “Zero Two” of 1968 was followed by the twin-carbureted 2002 Ti, followed by the even more powerful 2002 Tii.

The BMW 2002 Turbo would follow these predecessors, first appearing at the 1973 Frankfurt Auto Show. The public and press reaction to the 2002 Turbo was mixed to say the least. The car was powered by a modified version of the inline-four cylinder M10 engine from the naturally aspirated 2002, with a single overhead cam, and two valves per cylinder.

The compression ratio was reduced down to 6.9:1 in order to prevent knocking, and it was fed by a single KKK turbocharger with no intercooler. Kugelfischer mechanical fuel injection was used, with a boost enrichment feature, and power was listed as 168 hp at 5,800 rpm and 177 lb ft of torque. This was a considerable increase over the 128 hp available in the previous king of the 02 hill, the 2002 Tii. 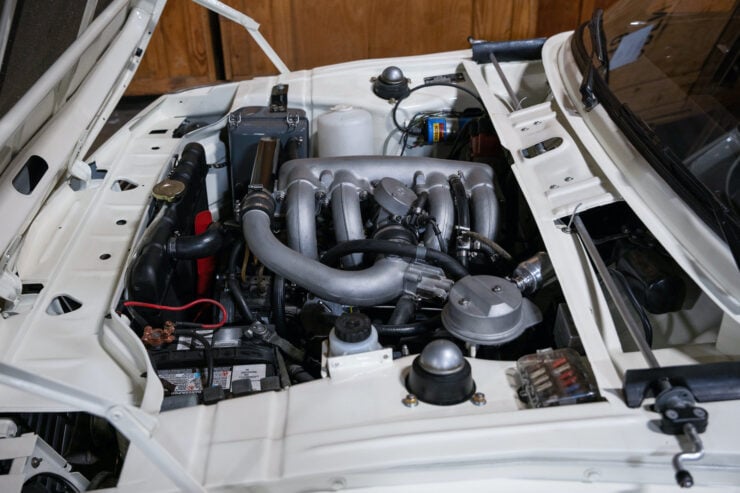 The performance of the new car was excellent but there were some eyebrows raised about the body kit, the rear lip spoiler, and the front air dam with “Turbo 2002” written in reverse script – presumably so the person in front of you on the Autobahn could read it in their rear vision mirror and promptly get out of the way.

Perhaps the key reason the 2002 Turbo would end up with low sales numbers was the 1973 Oil Crisis that kicked off in October of that year. The 2002 Turbo had been unveiled just a month earlier in September at the Frankfurt Auto Show, and skyrocketing fuel prices caused by the Oil Crisis turned consumers away from higher performance, more thirsty automobiles.

Just 1,672 examples of the BMW 2002 Turbo would be produced, and today they’re by far the most collectible cars in the 02 model family.

The 1974 BMW 2002 Turbo you see here benefits from a three-year rotisserie restoration, and it now carries a BMW Classic Certificate. 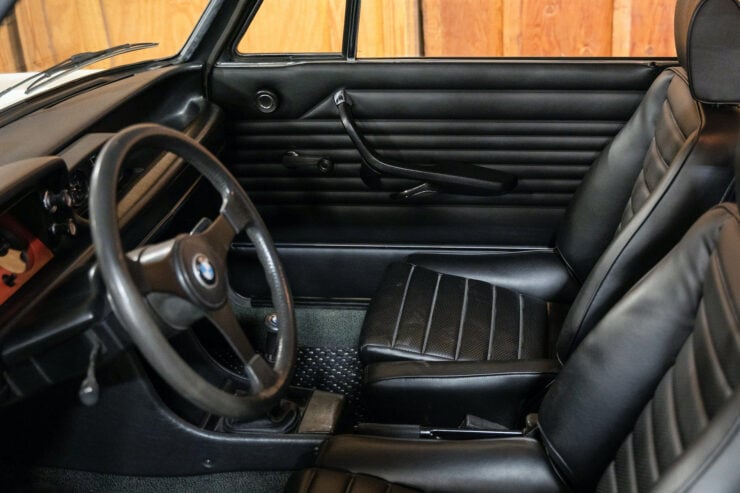 Above Image: The interior of the 2002 Turbo is surprisingly practical, with seating for four adults and a decent amount of trunk space.

The car has been repainted in its original shade of Chamonix with color-matched fender extensions, and the exterior is accented nicely by the classic Turbo graphics, a chrome beltline, and chrome rear bumper.

It’s sitting on a set of Alpina wheels shops with sticky Toyo Proxes R888 tires, and it has the desirable front air dam, rear spoiler, and center exhaust. Inside you’ll find Turbo-specific sport seats, a sunroof, VDO instrumentation and boost gauge, as well as a MotoMeter clock. 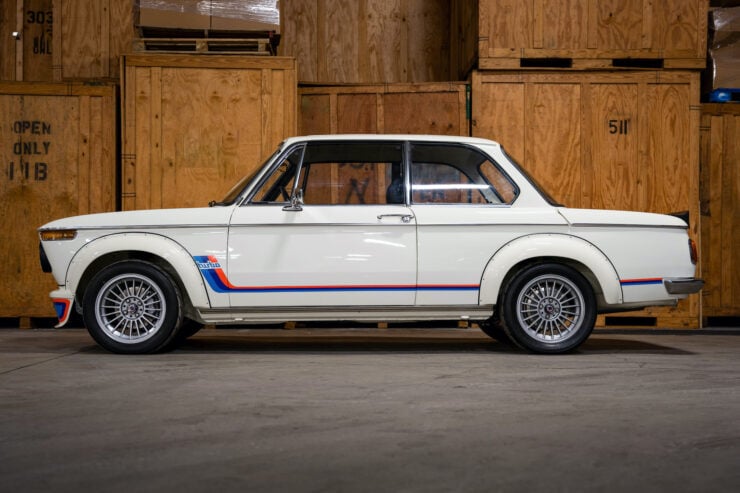 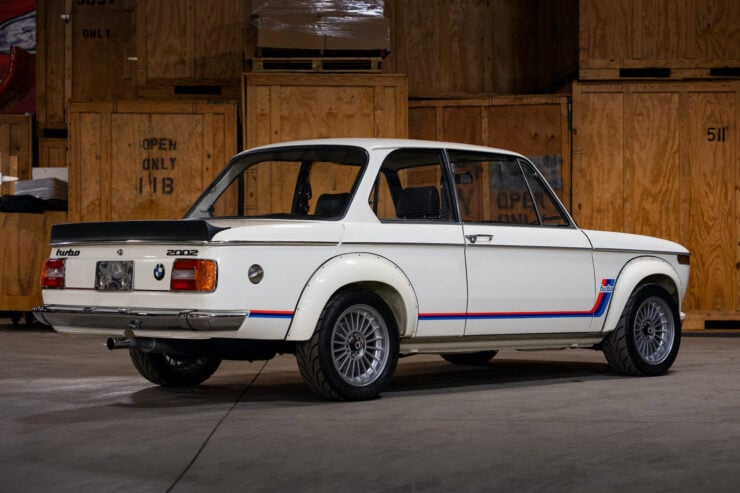 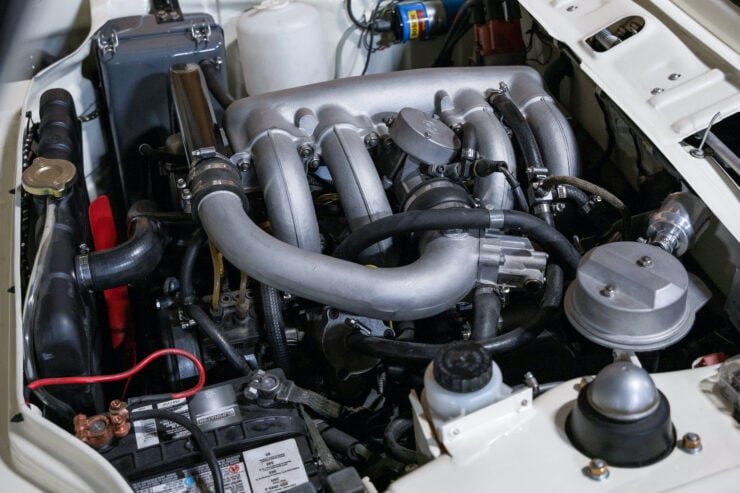 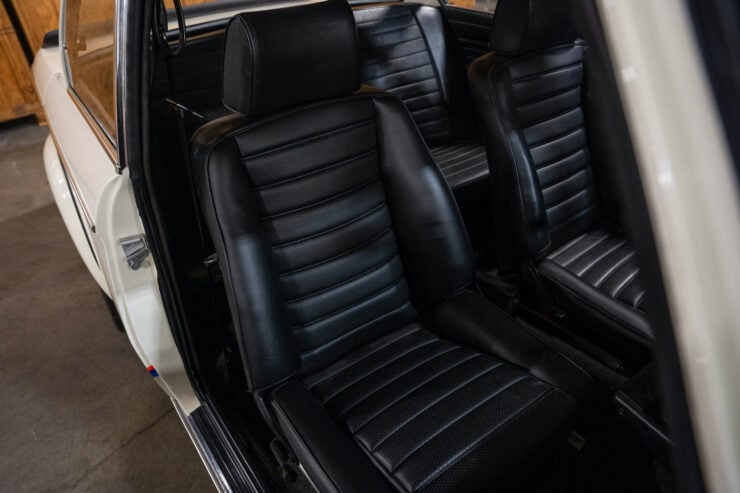 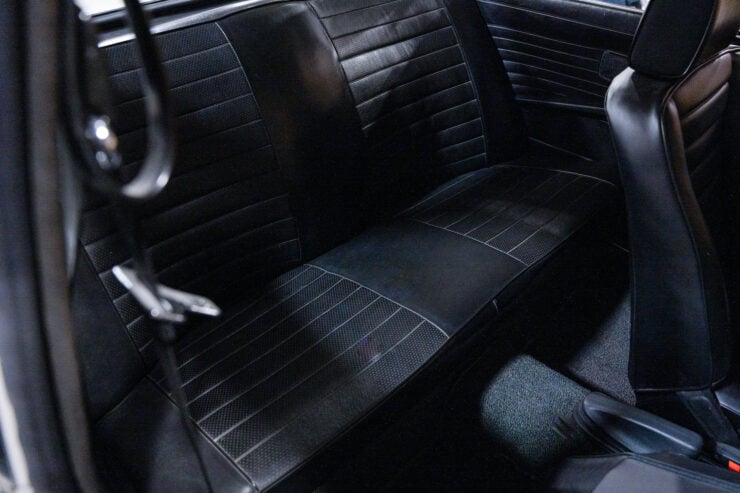 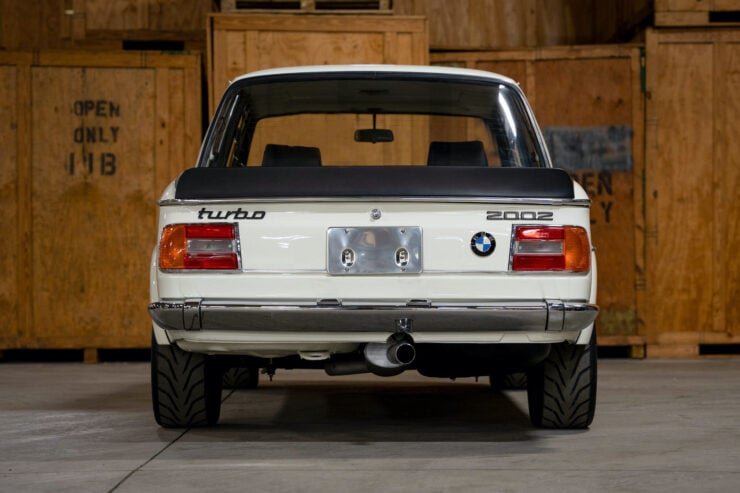 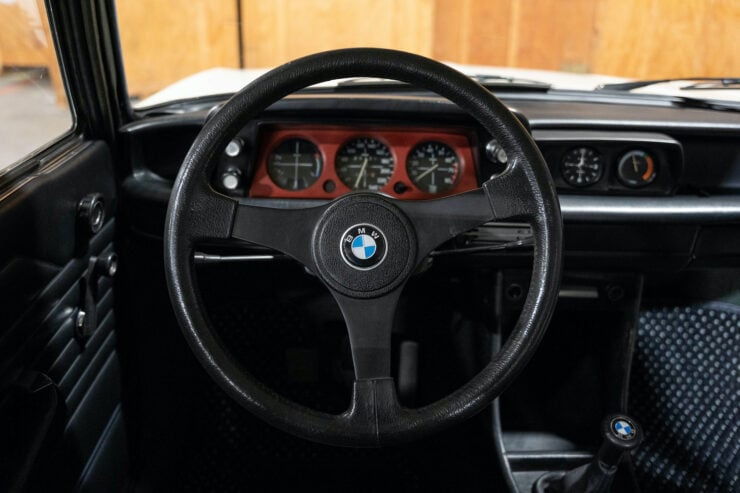 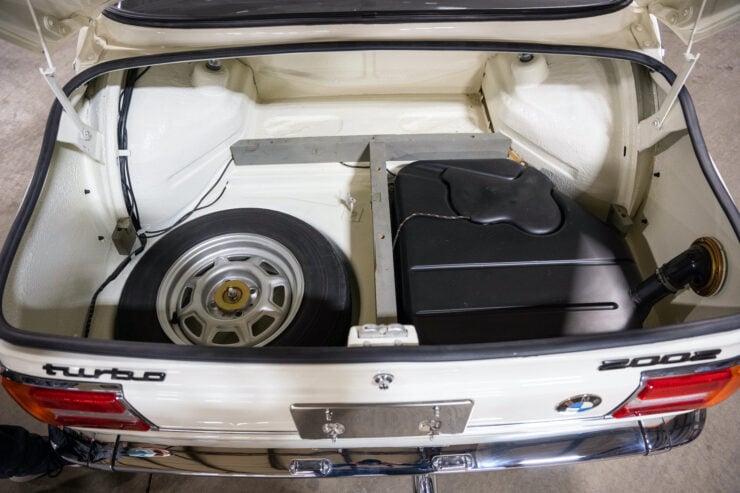 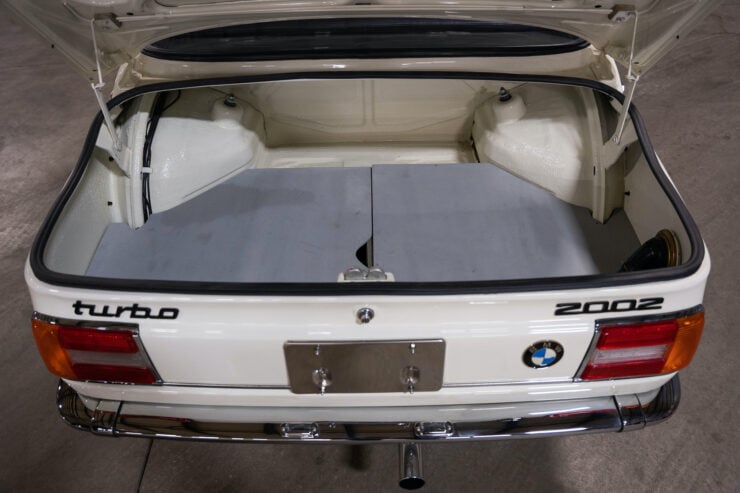