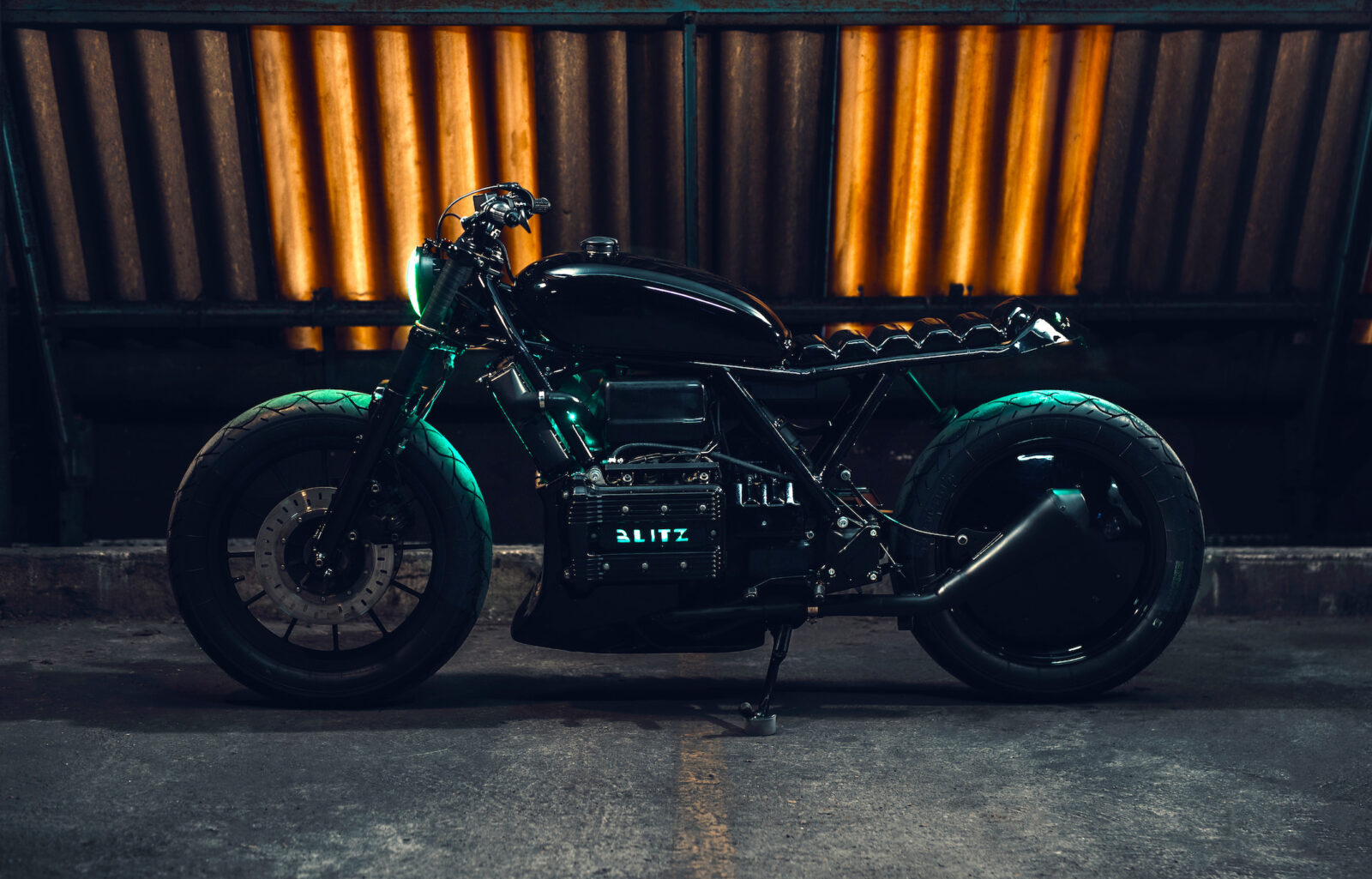 This is the Black Dot Mark II by Blitz Motorcycles, one of the original modern custom motorcycle garages that operates out of a secretive workshop in a Paris neighborhood hidden away and impossible to find unless someone shows you the way.

Blitz was founded by Fred and Hugo back in 2009, long before the modern custom motorcycle trend began when building bikes in your garage still seemed like an odd, almost anti-social pastime.

In the years since they’ve build a signifiant number of highly-influentiual motorcycles, they’ve also developed apparel and motorcycle gear, and written a book about the whole experience.

When BMW released the BMW K75 in 1985 it was designed to accompany the larger-engined K100 that had been released three years prior. 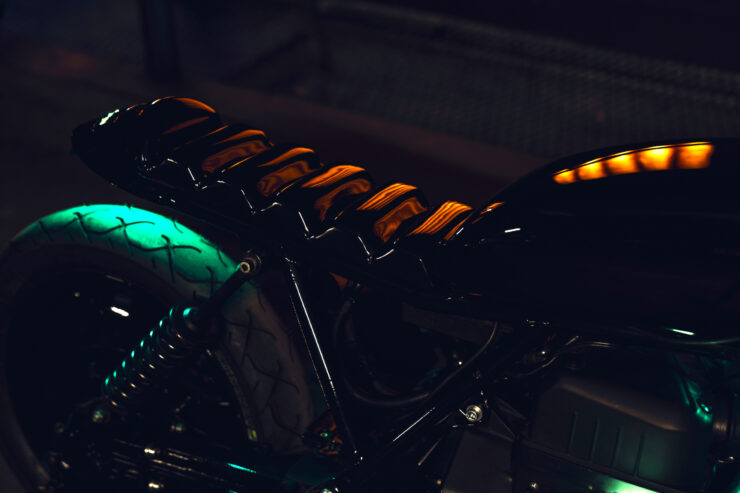 With its 740cc engine, 75 hp, and a top speed of 200 km/h (124 mph) the K75 would have been classed as a range-leading superbike if it had been released 10 years earlier. As it is, by the time of the mid-1980s it was essentially a middleweight motorcycle developed to offer a more manageable option for those who didn’t want or need a liter bike.

Owners of the K75 quickly realized it was more than the sum of its parts, the three-cylinder engine was smoother than its four-cylinder counterpart thanks to its twin balance shafts, it also featured a higher compression ratio, a higher performance cam, and of course, a lower overall weight.

The BMW K75 and K100 engines had been developed side-by-side from the beginning as a way of bringing the fight to the four big Japanese motorcycle manufacturers.

Taking The Fight To The Japanese Big Four

The Japanese motorcycle makers had been turning out advanced four-cylinder machines for years while companies like BMW, Ducati, Harley-Davidson, Norton, Moto Guzzi, and Triumph had all largely continued on with their far more simple air-cooled, two and three-cylinder engines.

To resolve this technological imbalance BMW engineers set to work developing an engine to replace the classic BMW Airhead engine, an air-cooled, push rod, flat twin with the cylinders sticking out either side for better airflow.

This new BMW Motorrad engine would borrow heavily from BMW automobile engines, it would have double overhead cams, liquid-cooling, fuel-injection, and an electronic ignition system. Rather than installing the engine upright transversely across the motorcycle frame they instead decided to lay the engine on its side, with the head on the left side of the bike and the crank on the right side.

Power was sent through a counter-rotating clutch to a 5-speed transmission, and from there to a low-maintenance shaft drive to the rear wheel. Having the engine on its side lowered the centre of gravity and provided easy access to important components for maintenance and repairs. 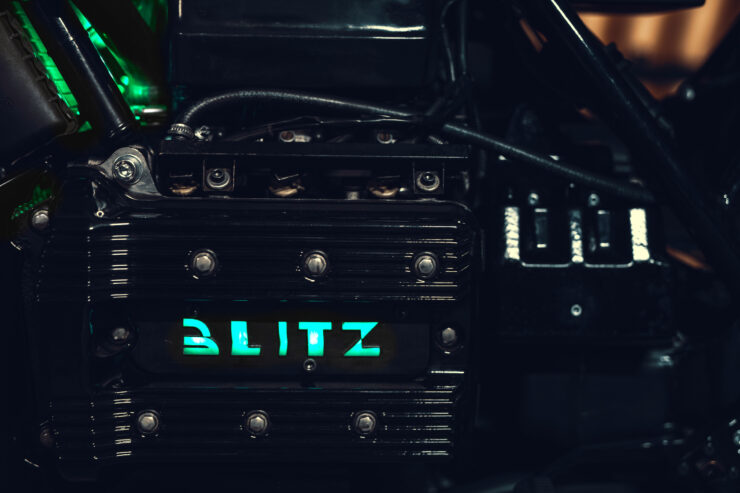 The “Blitz” name illuminates in the cam cover whenever the motorcycle is turned on.

BMW would keep the K75 in production for 10 years from 1985 until 1995, alongside its K100 sibling the K series bikes helped BMW establish themselves as builders of thoroughly modern motorcycles, and they have kept multi-cylinder, liquid-cooled motorcycles in production ever since.

The Black Dot Mark II is an excellent example of a custom build from Blitz Motorcycles, they developed it as an evolution of the Black Dot Mark I from 2019, both are jet black motorcycles with strong retro-futuristic design cues, looking like they just rolled out of the Blade Runner cinematic universe.

At this point I’m going to turn it over to Fred from Blitz, to tell you the story in his own words:

This time though we decided to leave our comfort zone and instead of using a carburated donor machine, we went for the total unknown (and so far ignored by us): injected fuel engine.

We have been using “K” model as “winter commuter” even before we started Blitz. I personally bought my K75 back in 2007 and never stop using this one ever since (especially in winter).

It was therefore natural to us to look a bit more into this model and see what we could make out of it. We know how reliable and easy to handle (even though heavy) they were. We just did not know if we could turn them into something more radical and appealing to our vision of the motorcycle. The donor machine here is a ’92 BMW K75 with over 150,000 kms of mileage. 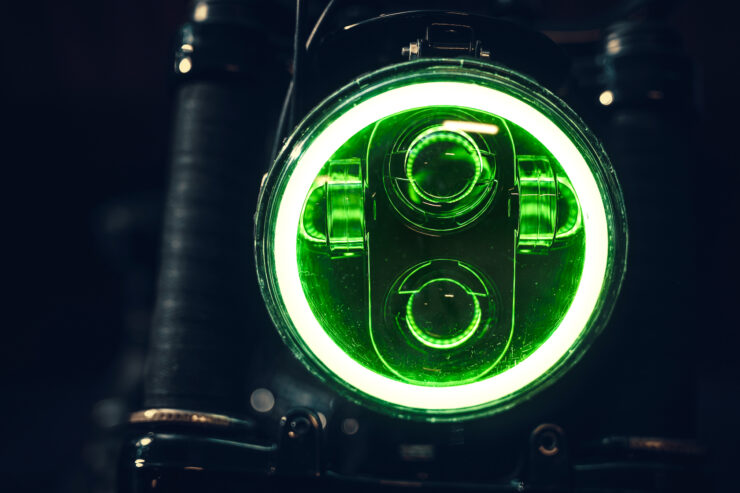 The modern LED headlight adds sci-fi flair while also offering much better illumination than the original.

We totally stripped off the bike, discovering “on-the-go” how clever the BMW Motorrad engineers had been, using this 3 cylinder engine that was first planned to be used on a car (but the project never went through). And discovering “on-the-go” what fuel injected really means: tons of electric / electronic components which we normally do not even hear about (fuel pump, fuel gauge, injection box, water pump, etc…).

Fully dismantling / rebuilding the engine (pistons, valves, timing) was not a walk in the park but still obeys to the same basic mechanical rules.

Now when it comes to simplifying the electric wiring (which is something we cannot help doing), that is another story. But we made it through and then came the time to think of a non OEM tank to place on the frame (whose structure has nothing to do with what we worked on so far), while keeping a fuel pump working as previously decided by the BMW engineers.

We used the services of friends who scanned the whole tope frame and make a mold out of this so that we could recreate the original funnel of the tank. Then the tank itself was outsourced to those same friends who sticked to our schematic (in terms of external shape) and made it from scratch (using steel sheets). 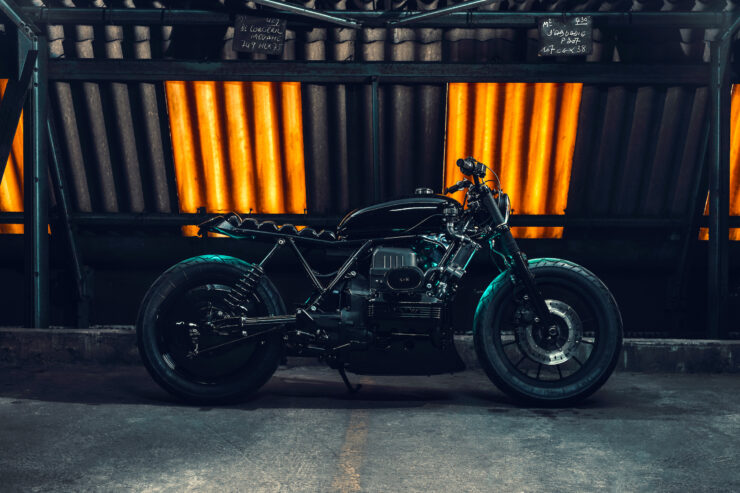 The bike looks like it just rolled off the set of Blade Runner.

The only issue was that the original fuel pump (“immersed” into the tank) could not fit anymore. It was time to look for the right external pump (in terms of pressure) ans see what the result would give. It was not easy. We failed many times but in the end, found the right component and finally cracked the engine up. All the rest being of course fully functional.

Here is a detailed list of the work done on the Black Dot Mark II: 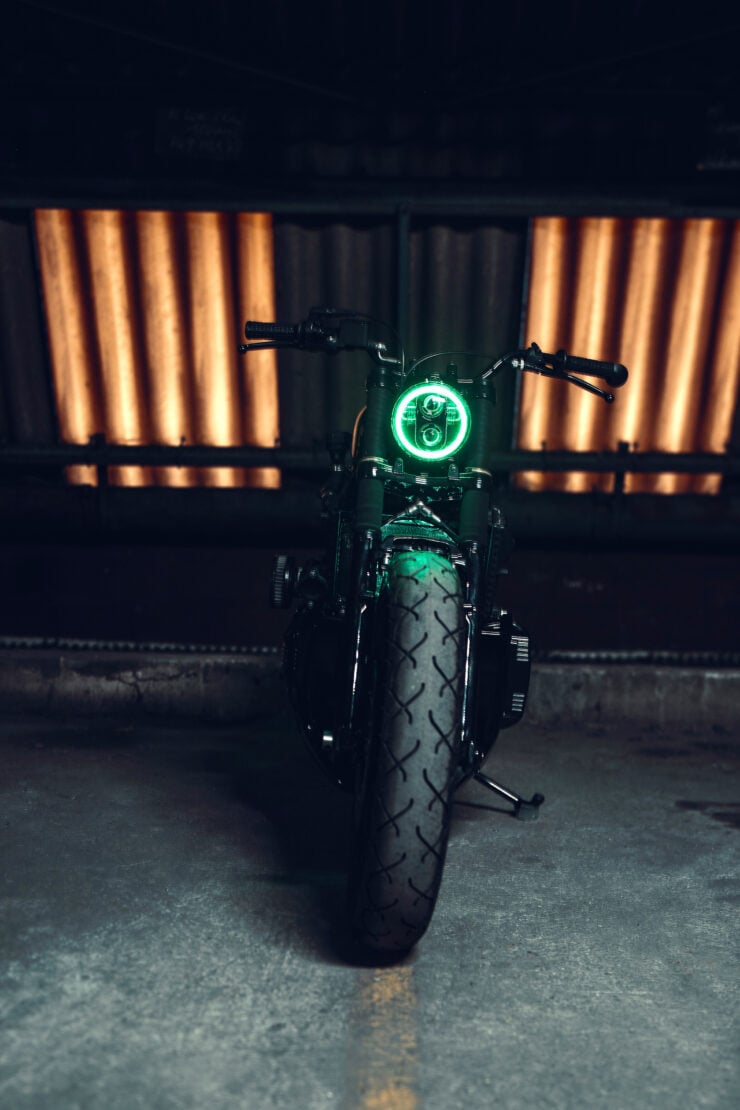 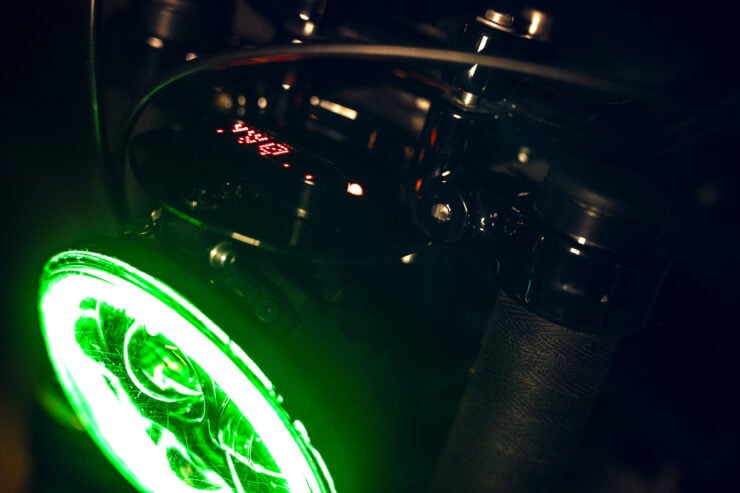 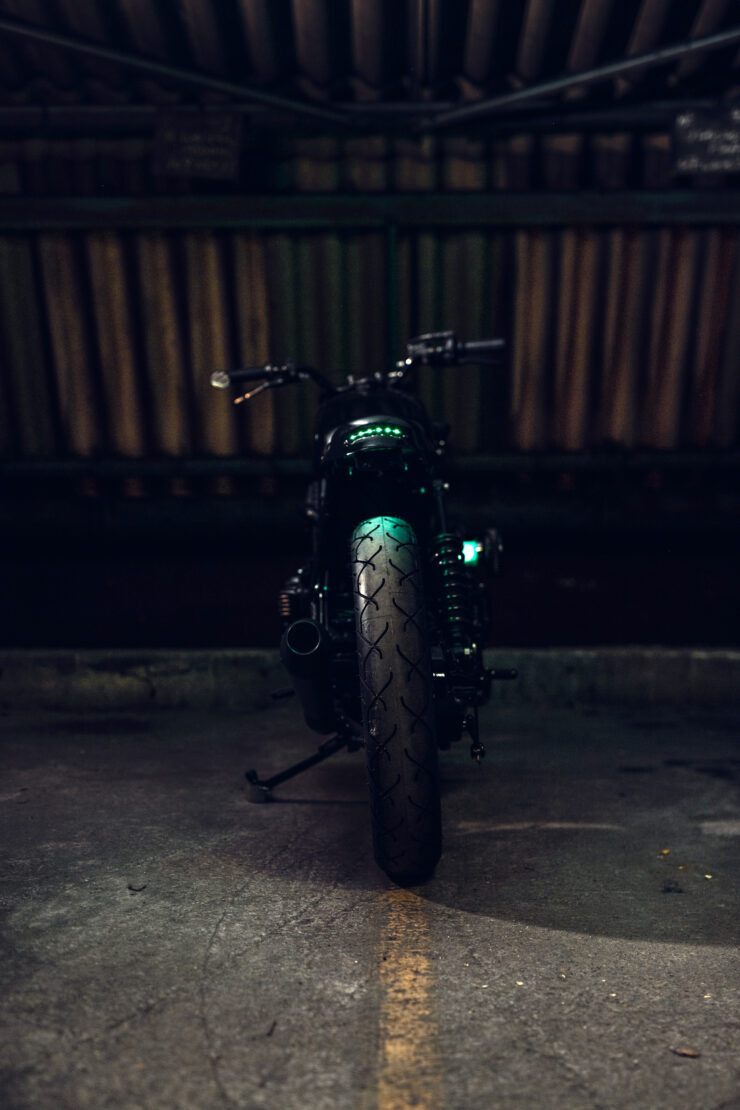 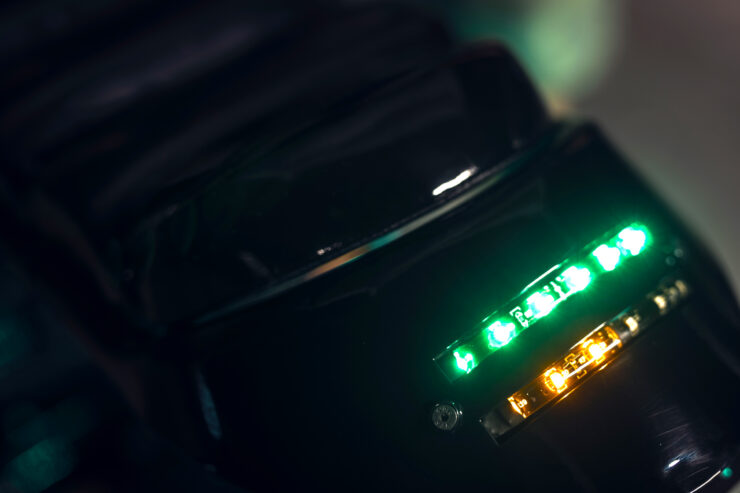 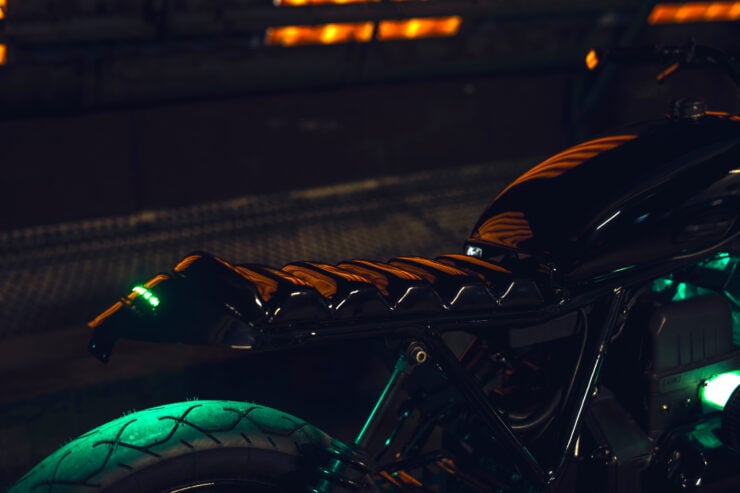