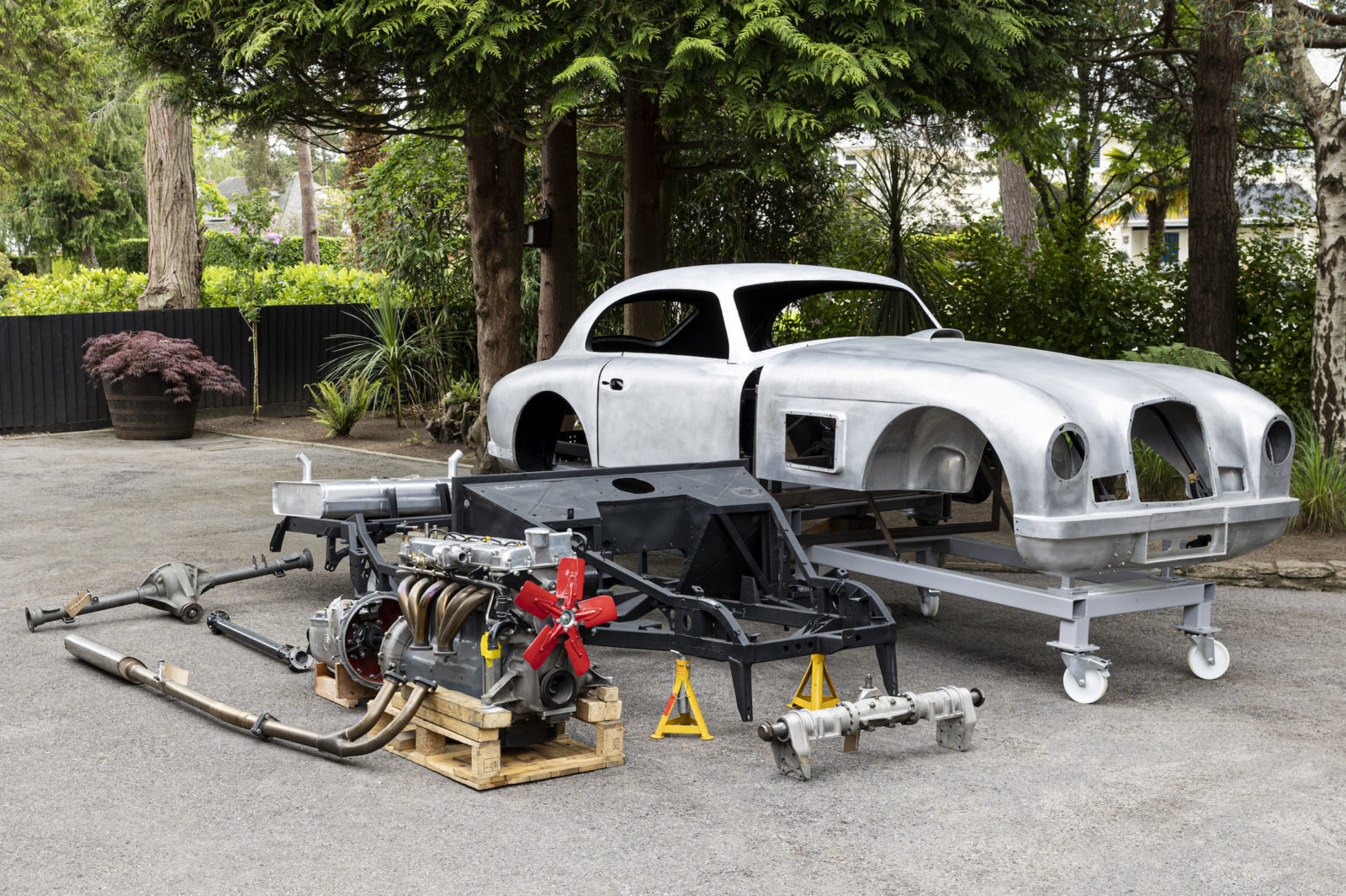 This partially assembled car is actually the first production Aston Martin DB2 that was ever made. It was initially driven by David Brown himself before it was sold to George Schrafft, the car would go on to race at the first ever running of the Sebring 12 Hours on the 15th of March 1952.

The car is now for sale in mostly restored condition, it requires a little more work and of course it needs to be assembled. The engine, gearbox, and axle have all been rebuilt, the chassis has been prepared, and the body is nearly ready for primer and paint.

Above Video: This documentary takes a deep dive into the complex history of Aston Martin, one of Britain’s most enduring automakers.

He enquired to learn more, after discovering the company for sale was Aston Martin he bought it. In the same year he also bought storied British automaker Lagonda, acquiring their twin cam straight-six and a talented engineering/design team at the same time.

Brown had been born into a world dominated by vehicles, his family’s business was a major manufacturer of gears, gearboxes, and tractors. With the purchase of Aston Martin he was seeking to to diversify into a new, and perhaps more glamorous realm occupied by iconic motor races, beautiful cars, and international jet setters.

After Brown’s purchase he initials, DB, have been added to many of the most important cars made by the company, including the legendary Aston Martin DB5 driven by James Bond (and Paul McCartney.)

The Aston Martin DB2 would be the first production car from the newly revived company to be fitted with the double overhead cam straight six from Lagonda. This engine has been developed by William (Willie) Watson and the great W.O. Bentley. 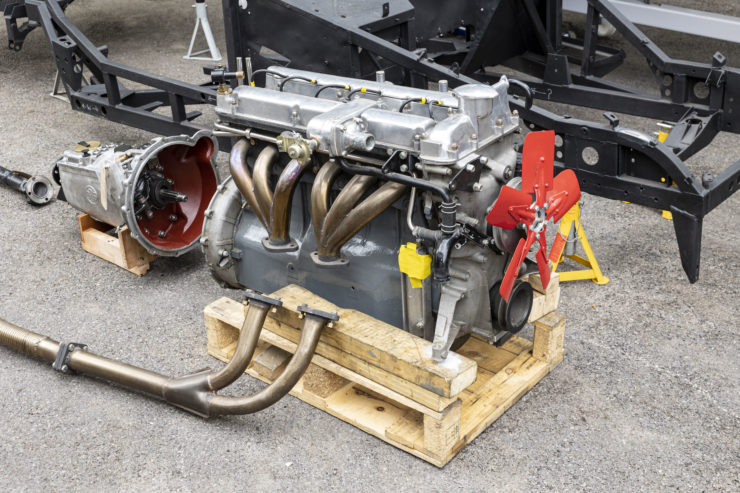 This is a correct Aston Martin DB2 engine, the transmission is sitting just to the left of it there. Both have been rebuilt and are said to be ready for fitment.

Prior to this, the Aston Martin DB1 had been fitted with the company’s pre-WWII inline-four cylinder unit. This was an engine that was showing its age and wasn’t going to be seriously competitive against the raft of new vehicles being released by the likes of Ferrari, Jaguar, Maserati, and Mercedes-Benz.

The DB2 used a modified version of the Claude Hill-designed tube-frame chassis used on the earlier Aston Martin 2-Litre Sports. The body was penned by Frank Feeley, a stylist who had moved to Aston from Lagonda after both companies had been acquired by Brown. Earlier in his career Feeley had designed a number of vehicles including a special body for Sir Malcolm Campbell’s tuned Rapier.

Three pre-production Astons were entered into the 1949 24 Hours of Le Mans, one of which was the development prototype for the upcoming DB2 model fitted with the Lagonda-sourced 2.6 liter straight-six.

Later in the year a Lagonda-engined Aston finished 3rd in the Spa 24 Hours and in 1950 the new Astons would take 1st and 2nd in class finishes at the 1950 24 Hours of Le Mans. 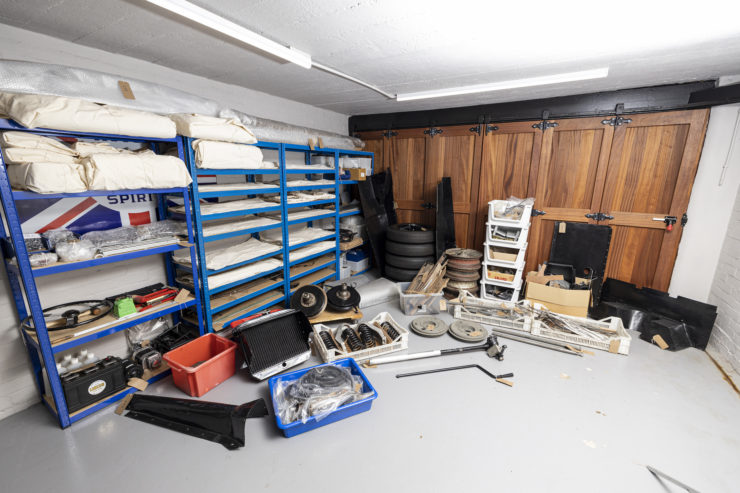 There are a slew of additional parts that come with the car, including many hard to find items.

Across the Atlantic Briggs Cunningham drove his DB2 to 2nd in class at the inaugural Sebring 12 Hours, a slew of other wins, class wins, and podium places would follow for the DB2.

Having set the tone for all the DB Astons that were to come, the DB2 was succeeded by the Aston Martin DB2/4 in 1953.

It’s the first production DB2 that was built, it was initially driven by David Brown himself, and its first official owner was George Schrafft. It was later sold to amateur racing driver David Hirsch who raced it in the inaugural Sebring 12 Hours. 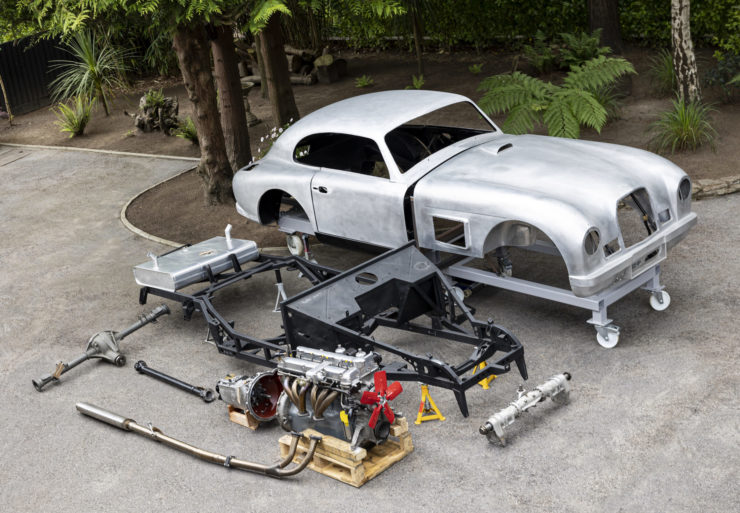 The chassis has been prepared and the alloy body is listed as being almost ready for primer and paint.

This would be followed by entries in the 100 Mile SCCA Bridgehampton Sport Car Road Race, the Convair Trophy Race, and the Watkins Glen Grand Prix.

The car is said to have stayed in Hirsch’s ownership until 1959. A number of other owners followed and at some point the original engine was swapped out for a Jaguar unit. Later in the cars life a restoration was undertaken but never finished, and the car is now being offered for sale in, what appears to be almost ready to reassemble condition.

A correct Aston Martin DB2 engine has been sourced as well as a transmission and they’ve both been rebuilt along with the axle ready for assembly. The car is also accompanied by many other smaller parts that are currently sitting in shelves (pictured above).

RM Sotheby’s are offering this historically important DB2 for £250,000 (~$300,000 USD) out of Bournemouth in the United Kingdom. If you’d like to read more about the car or enquire about buying it you can visit the listing here. 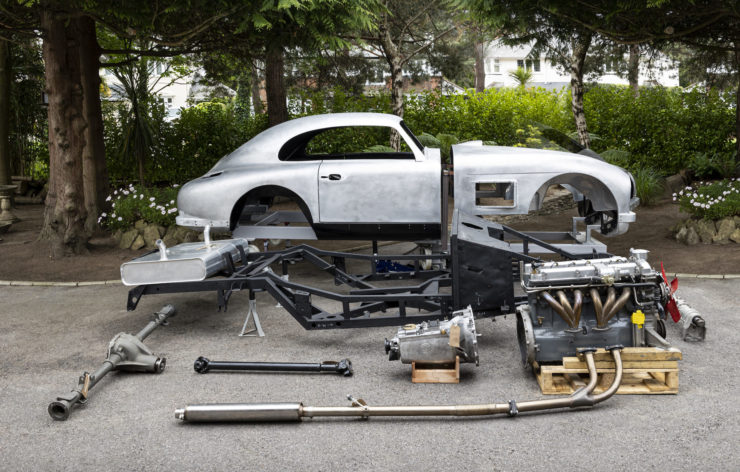 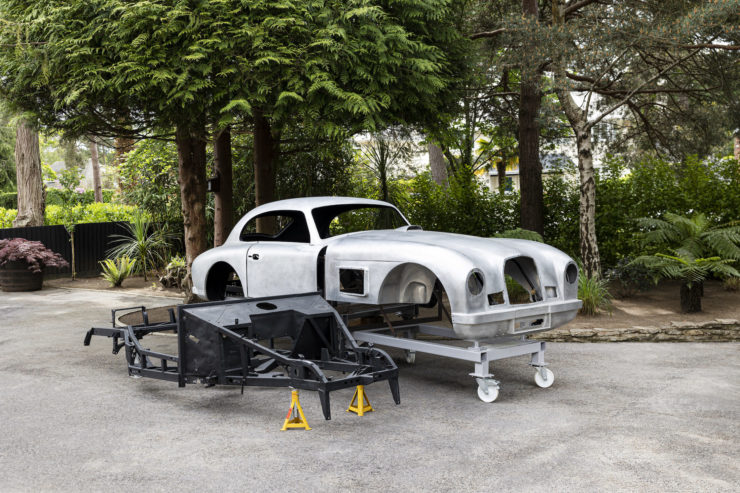 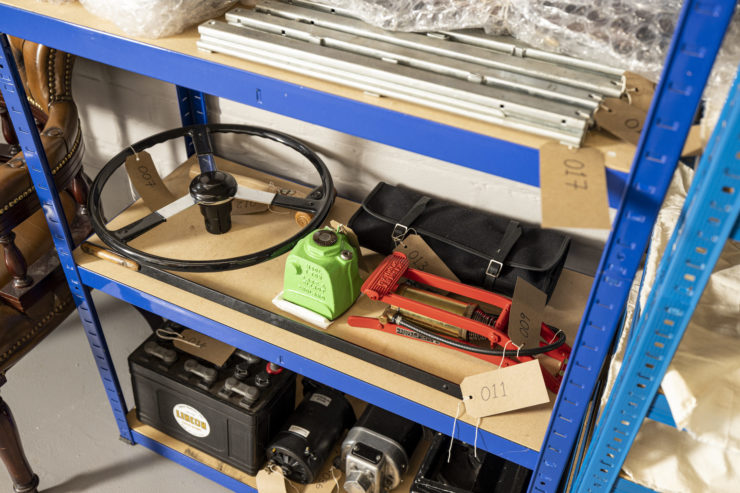 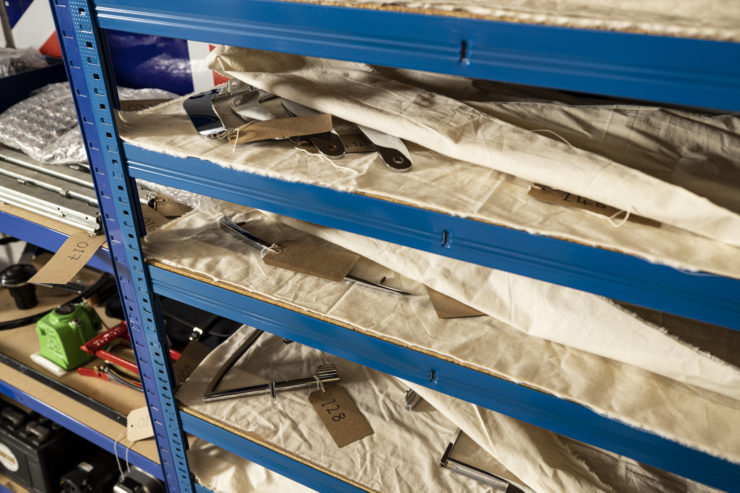 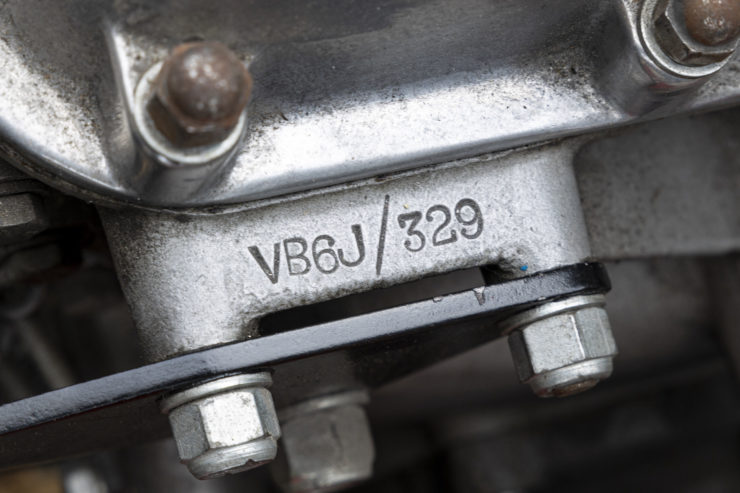 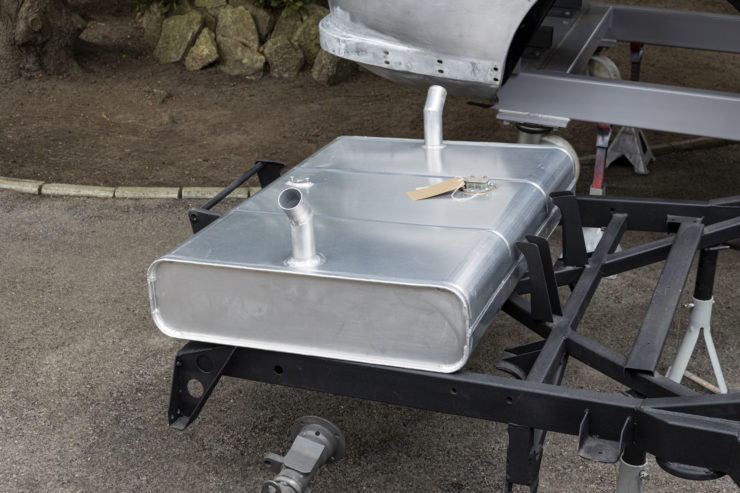 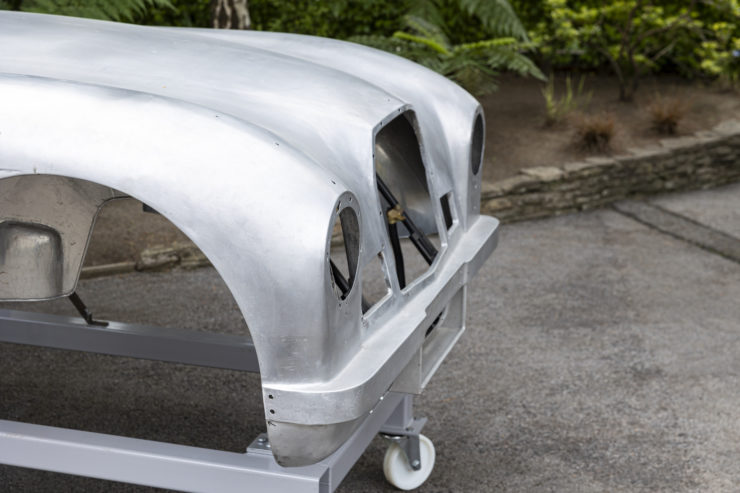 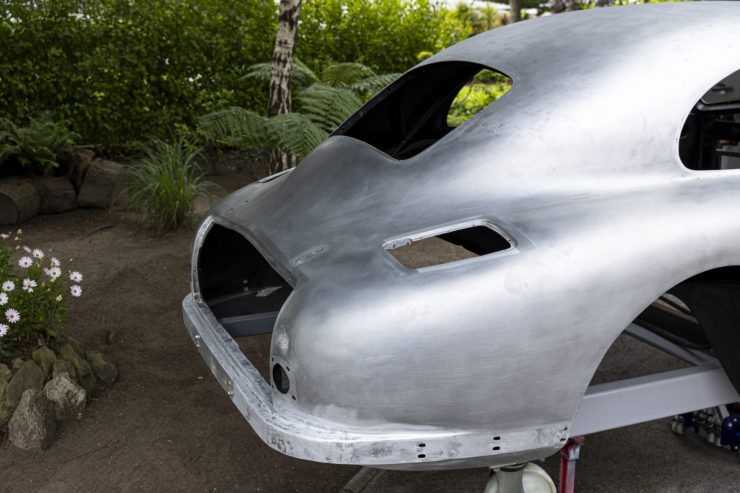 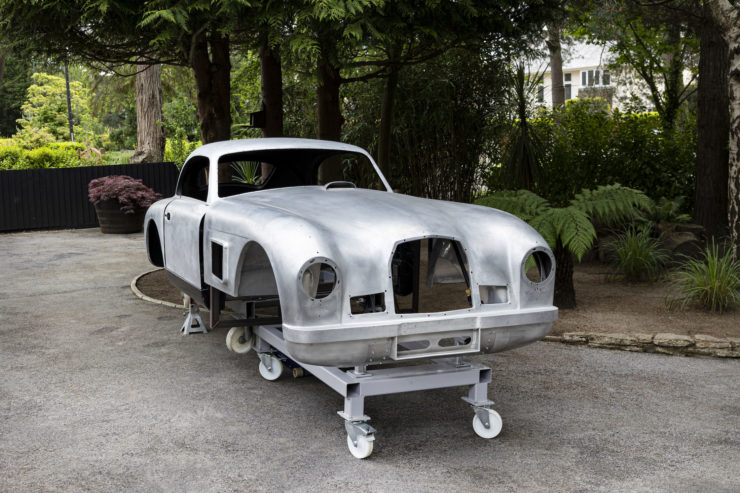 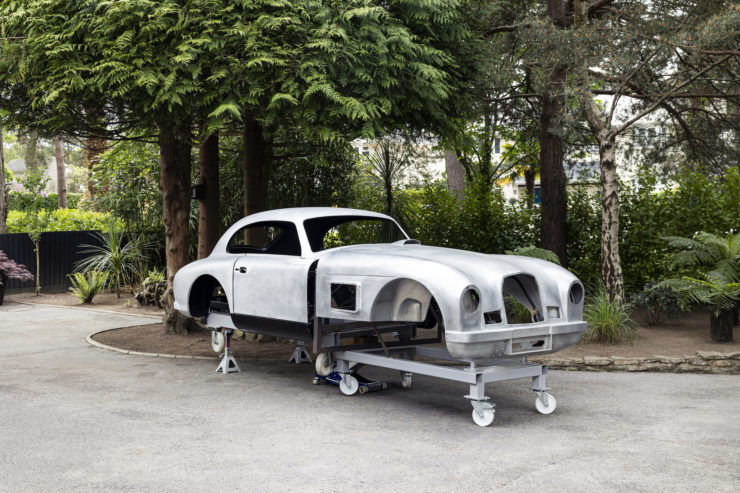