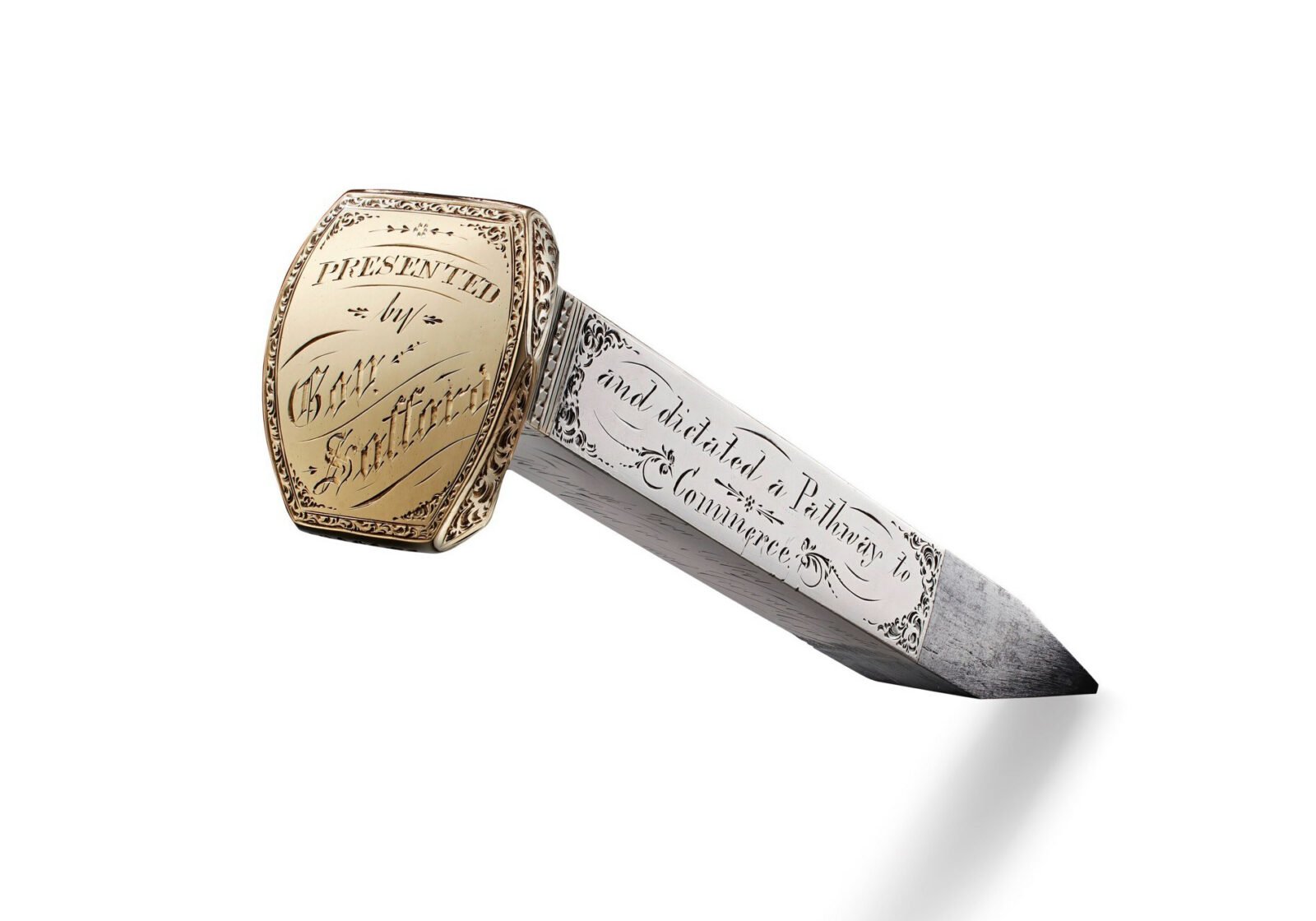 This is the “Arizona Spike,” it’s one of four ceremonial railroad spikes that were made to celebrate the completion of the Transcontinental Railroad on the 10th of May 1869.

Originally known as the “Pacific Railroad,” the Transcontinental Railroad was built between 1863 and 1869 to connect the existing eastern rail network in the USA with the Pacific Coast all the way over in Oakland Long Wharf on San Francisco Bay.

The Transcontinental Railroad linked the west and east coasts of the United States for the first time, vastly simplifying the movement of cargo and passengers in an era long before busses, sealed highways, or aircraft. 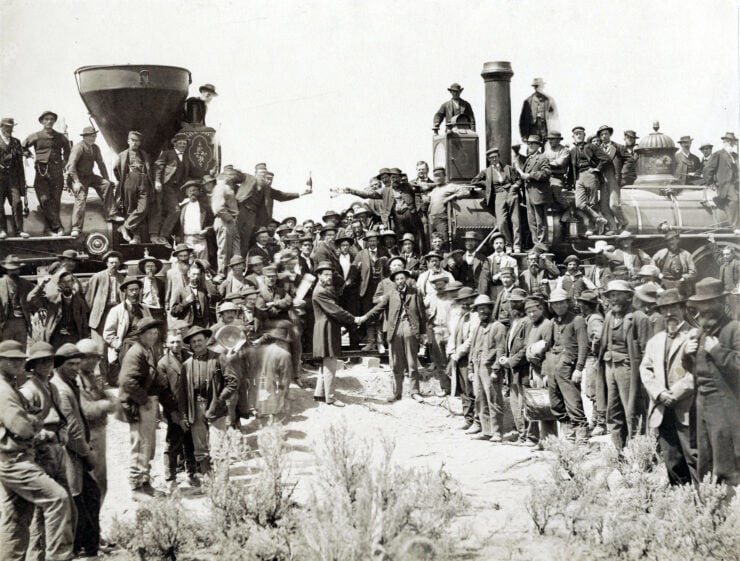 The ceremony for the driving of the “Golden Spike” at Promontory Summit, Utah on the 10th of May 1869 – completion of the First Transcontinental Railroad. At center left, Samuel S. Montague, Central Pacific Railroad, shakes hands with Grenville M. Dodge, Union Pacific Railroad (center right).

Upon completion of the railway four ceremonial spikes were created, there were two golden spikes, a silver spike, and a gold, silver, and iron spike (shown in this article) supplied by the Arizona Territory and given to Union Pacific President Oliver Ames.

This last spike was engraved with the text:

“Ribbed with iron, clad in silver and crowned with gold Arizona presents her offering to the enterprise that has banded a continent, dictated a pathway to commerce. Presented by Governor Safford.” 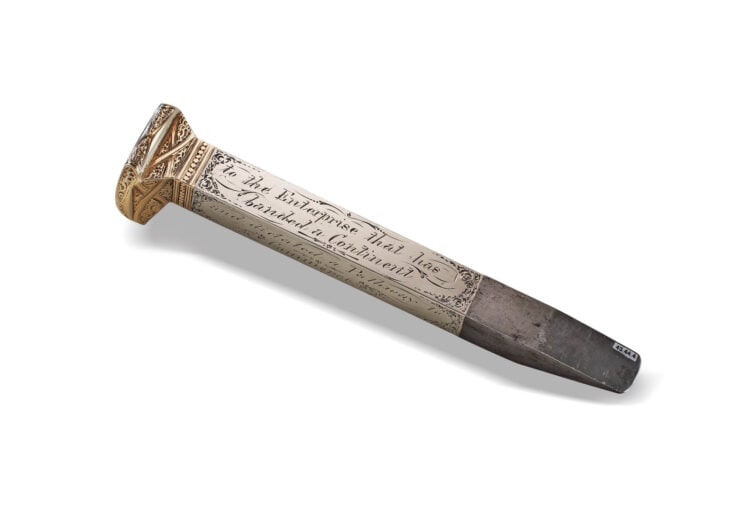 Each of the four sides of the spike are engraved, the full message reads: “Ribbed with iron, clad in silver and crowned with gold Arizona presents her offering to the enterprise that has banded a continent, dictated a pathway to commerce. Presented by Governor Safford.”

It’s believed that the spike was made by G.W. Laird in San Francisco in 1869, however this hasn’t been confirmed. It has a gold head, a silver shaft, and an iron spike at the base.

As a significant piece of American history its value is understandably priced accordingly, with the current estimate sitting at between $300,000 – $500,000 USD.

If you’d like to read more about it or register to bid you can visit the Christie’s listing here, it’s due to be sold on the 27th of January in a live online auction out of New York. 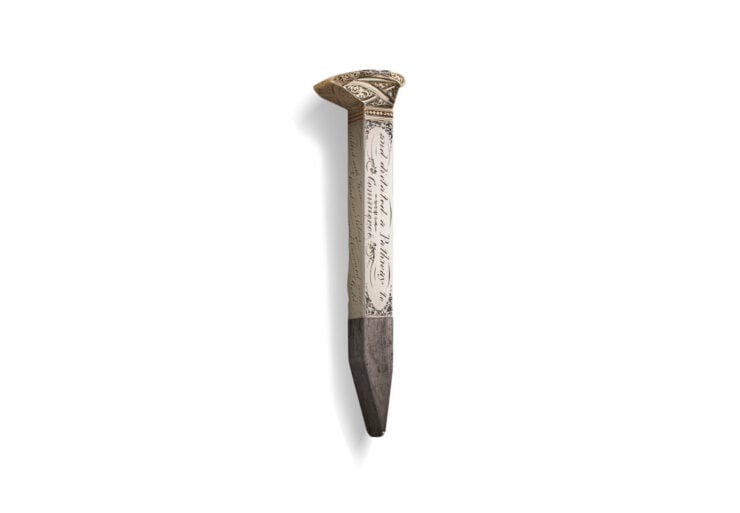 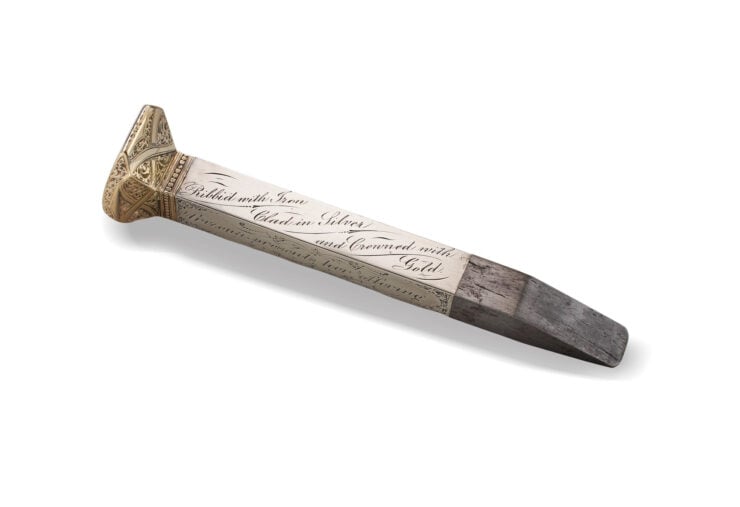