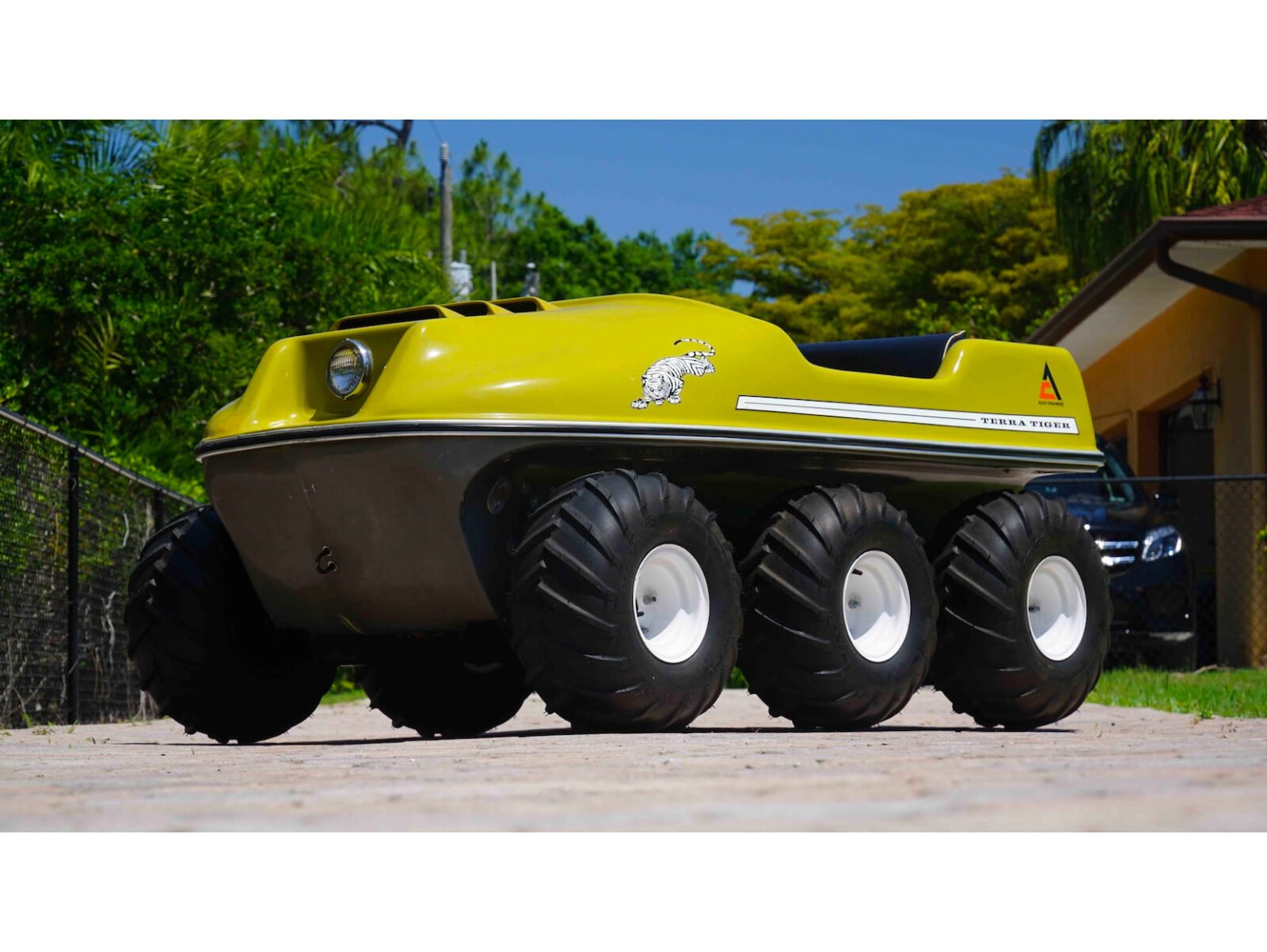 The Allis-Chalmers Terra Tiger 6×6 was one of the leading amphibious ATV designs of its era, the vehicle is essentially a small boat and a little off-roader rolled into one that can be used for fishing, hunting for surf spots down long sandy beaches, adventuring through forests, and exploring rivers and lakes.

The secret to the Terra Tiger’s success was its simplicity, the design utilizes a water-tight fibreglass hull with three axles powering six wheels. Steering is accomplished by applying brakes on one side, much like a tank, as this vastly simplifies construction and means the vehicle needs just six water-tight axle seals to remain buoyant.

In-keeping with the philosophy of simplicity the design forgoes the use of suspension, instead using wide balloon tires with low air pressure which gives the tires soft side walls which soak up bumps and bangs when driving off road.

Allis-Chalmers didn’t actually develop the Terra Tiger 6×6 in-house, rather it was a pre-existing design by Marvin Feldmann of Feldmann Engineering and Manufacturing Company in Sheboygan Falls, Wisconsin. Allis-Chalmers was better known for their tractors and industrial machinery but the 1960s were a challenging time for the company and they were seeking new lines of revenue.

One potential new source of revenue for Allis-Chalmers was the flourishing ATV market, and this is why they licensed the Feldmann 6×6 design. The company would offer two primary versions of the 6×6, a more affordable 10 hp version and a more full-featured 18 hp version with an electric starter and a higher top speed.

Above Video: This is an original promotional film by Allis-Chalmers for the Terra Tiger 6×6.

The 18 hp version was the most popular, although no solid sales figures exist and this claim is based on information gleaned through scraps of information available online. The 18 hp Terra Tiger was powered by a JLO L295E single-cylinder two-stroke engine with a capacity of 17.8 cu. in. (292 cc). Power is sent through a torque converter to three axles driving six wheels in total.

The top speed is listed as 30 mph on land and 2 mph in the water, the low water speed is due to the fact that it uses the rotation of the tires for forward propulsion which isn’t the most effective method, and the vehicle itself isn’t particularly hydrodynamic at the best of times.

The Allis-Chalmers Terra Tiger can accomodate two adults, or one adult and two kids, with 11 cu. ft. of storage space and a total land capacity of 600 lbs. 600 lbs is also listed as the weight of the vehicle, and the 10 hp version tips the scales a little lighter at 525 lbs.

After the introduction of three-wheelers and subsequently quad bikes the popularity of 6x6s waned drastically. There are still some in production, in fact there are even 8x8s still being built also, and they’re often used for remote area access, emergency services, and by forestry services.

The example you see here is coming out of single family ownership, it’s listed as being in highly original condition with its original gel coat and decals, and its original seat. This is the more desirable 18 hp version and it’s being offered with a bill of sale.

If you’d like to read more about this unusual 6×6 or register to bid you can click here to visit the listing on Mecum. Scroll to the bottom of this page if you’d like to see the original Allis-Chalmers Terra Tiger brochure. 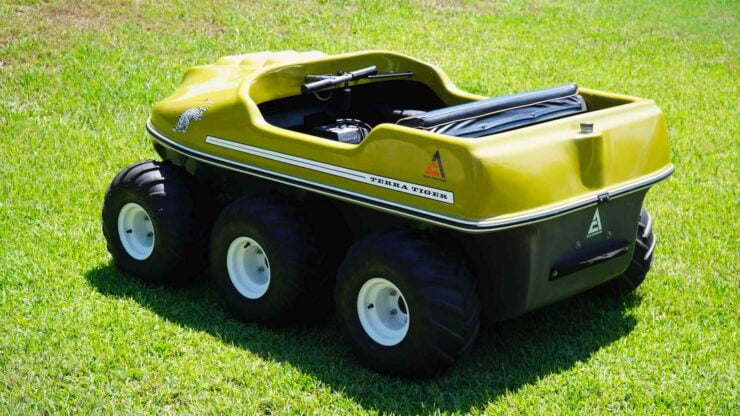 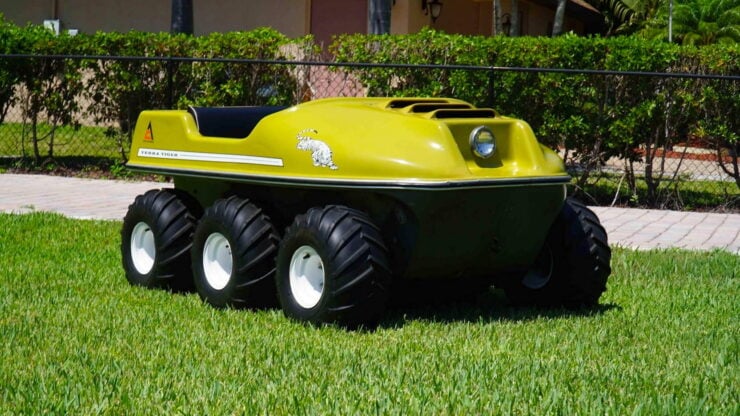 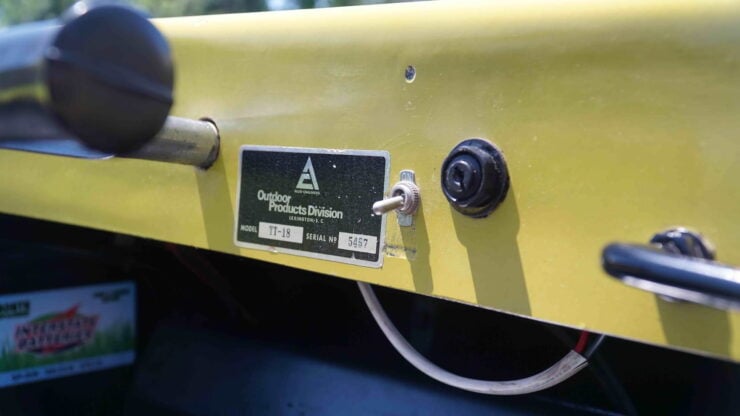 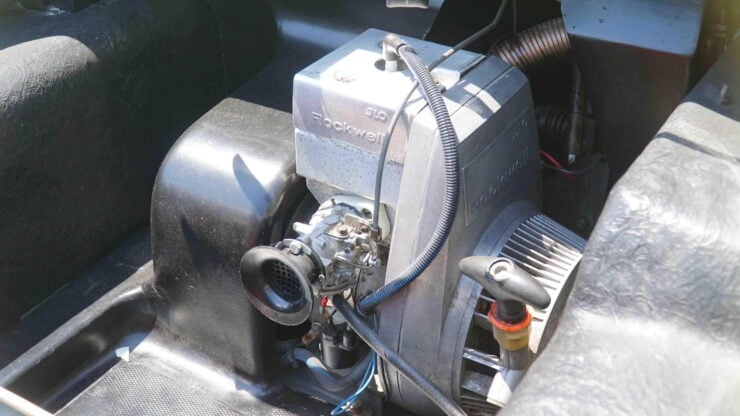 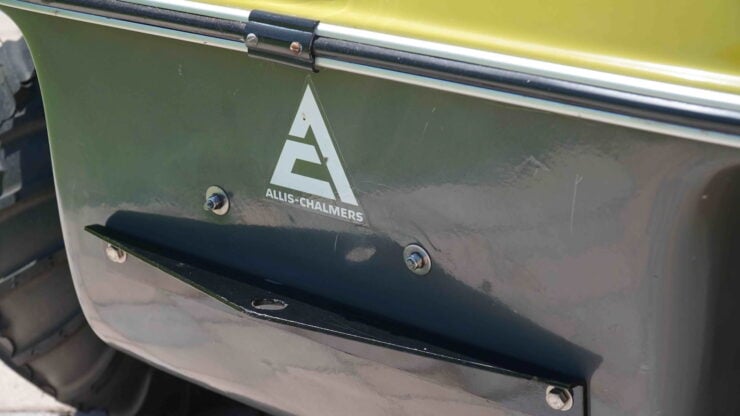 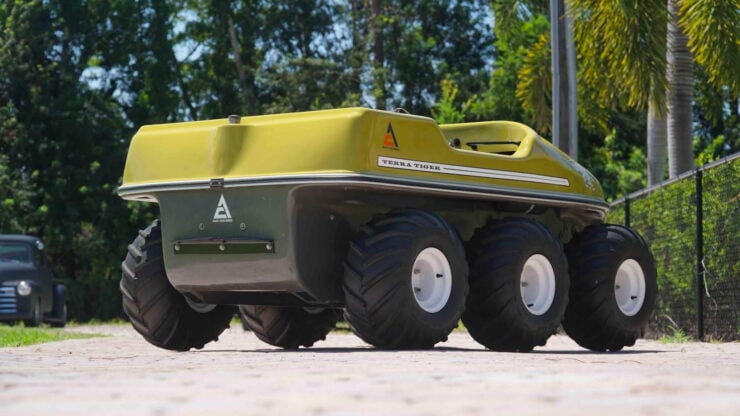 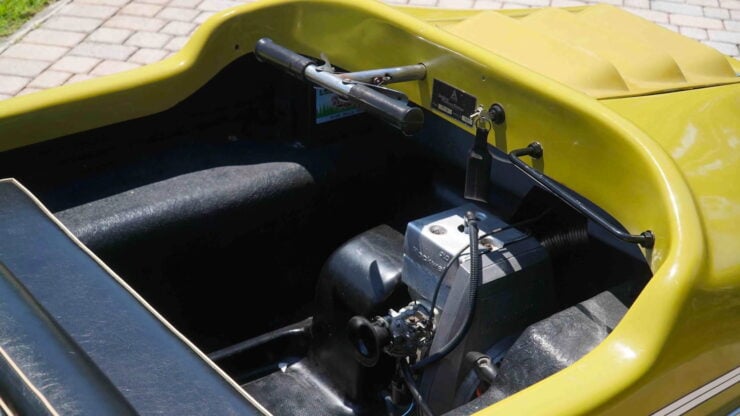 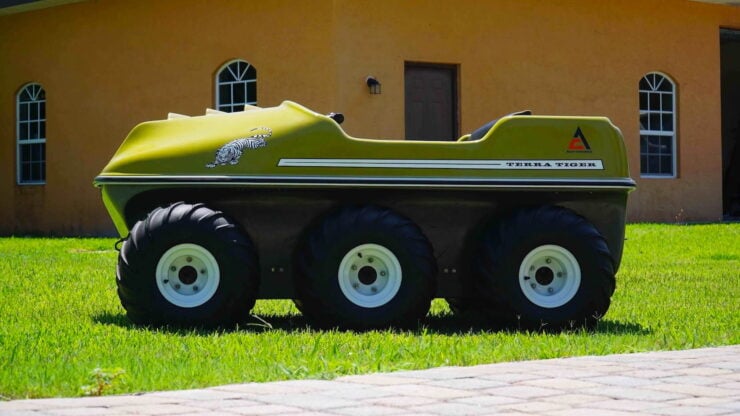 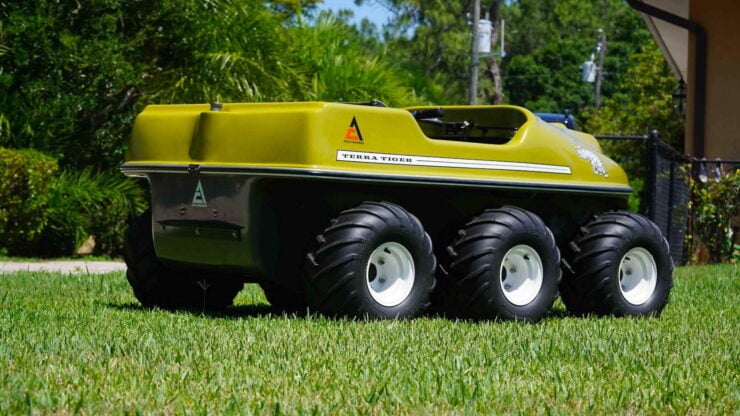 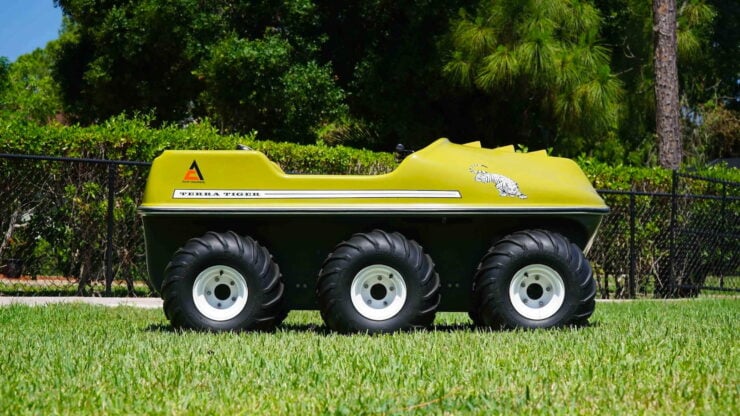 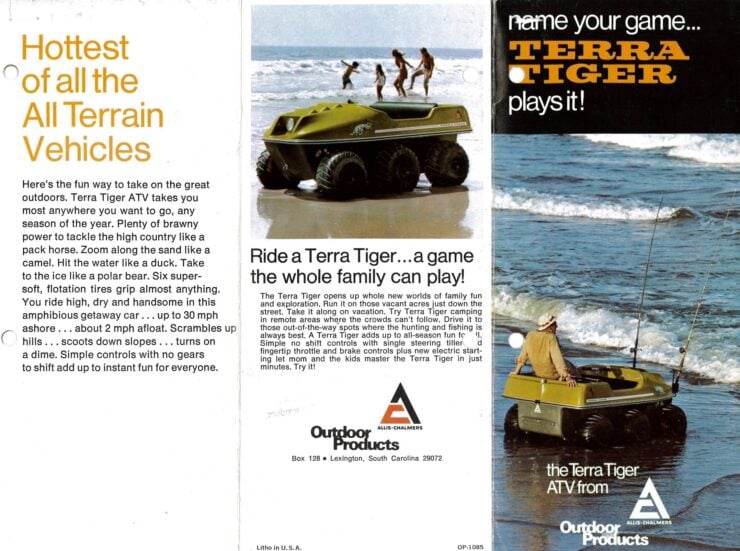 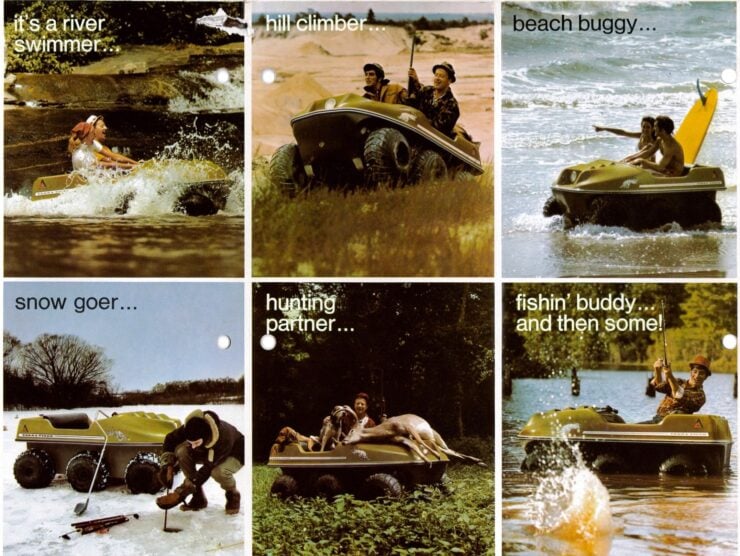 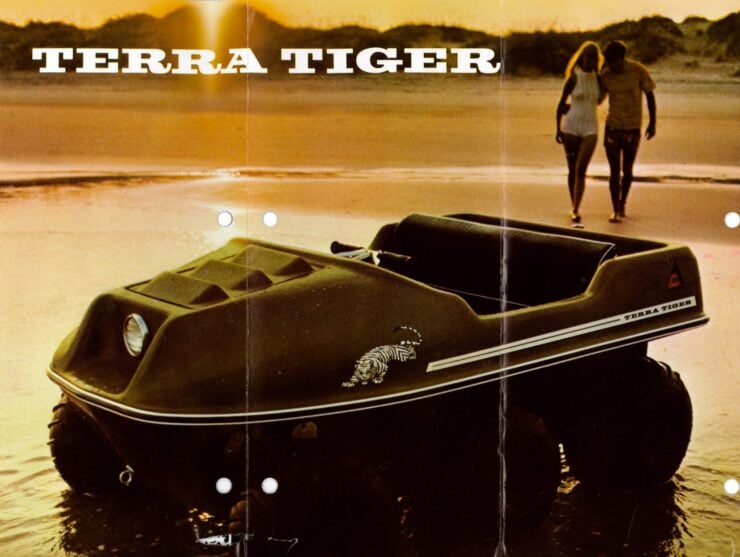 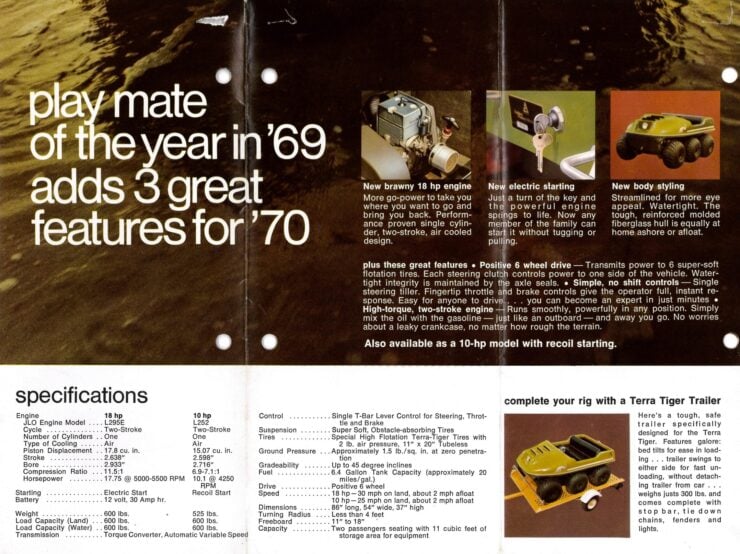