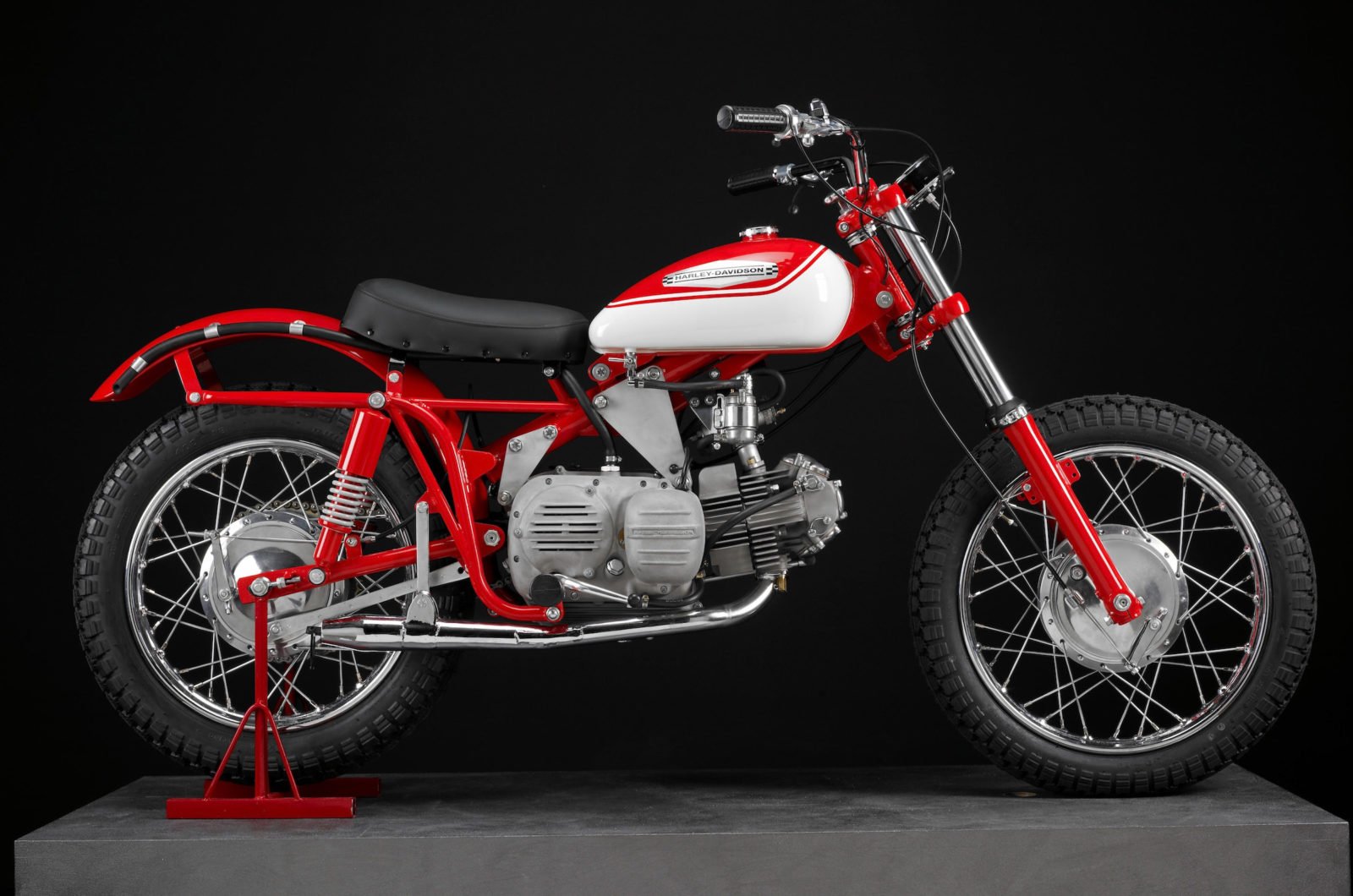 This is a rare and recently restored Aermacchi Harley-Davidson Sprint CRS, the result of an alliance between Harley-Davidson and Italian motorcycle manufacturer Aermacchi in the 1960s. This was the pure racing version of the Sprint, designed for both fun and competition use.

Harley-Davidson enjoyed good sales figures for their large-capacity motorcycles in the 60s, but the entire small-capacity motorcycle market was unserved by them. They strategically bought a 50% stake in small motorcycle specialist Aermacchi, to give them an entry into the world of small and medium-sized bikes.

The 1960s were arguably the age when the small-capacity motorcycle really came into vogue in the United States – particularly for off-road use. With a few exceptions scramblers had often been large capacity street bikes with a few modifications for off-road use – bikes like the Triumph TR6C and the Norton P11. 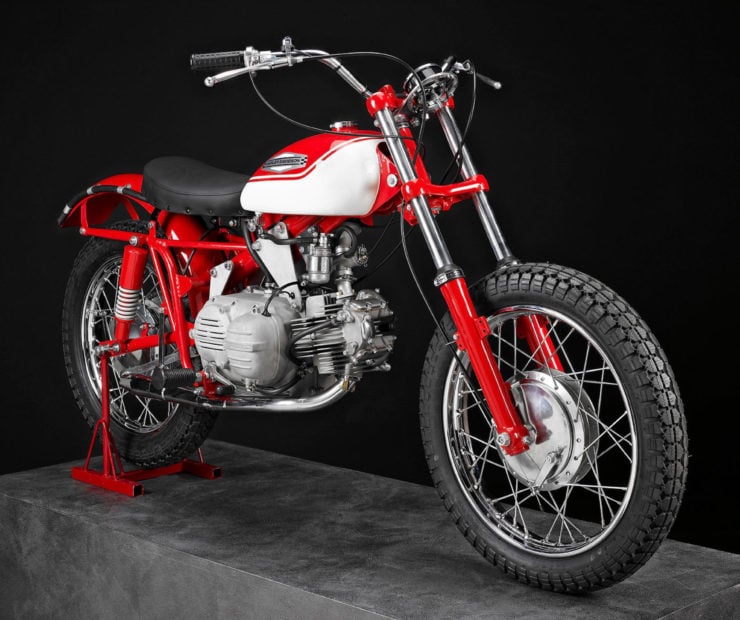 The Aermacchi Harley-Davidson Sprint CRS was the member of the Sprint family designed specifically for off-road use. It came with no headlight, brake light, blinkers, speedometer, of front fender.

The benefits of smaller-capacity motorcycles that were both considerably lighter and cheaper to buy made them appealing to many Americans, and by the end of the 1960s they were dominating the sales charts – led by the all-conquering two-strokes.

Harley-Davidson must have realized they were leaving a lot of money on the table by not building smaller or even mid-sized motorcycles, and so in 1960 they bought a 50% stake in Italian motorcycle manufacturer Aermacchi – a company with an established range of sub-500cc bikes.

After having acquired the remaining 50 of Aermacchi in 1974 Harley had decided to go in another direction by 1978, and they sold Aermacchi Harley-Davidson to Italian motorcycle manufacturer Cagiva. 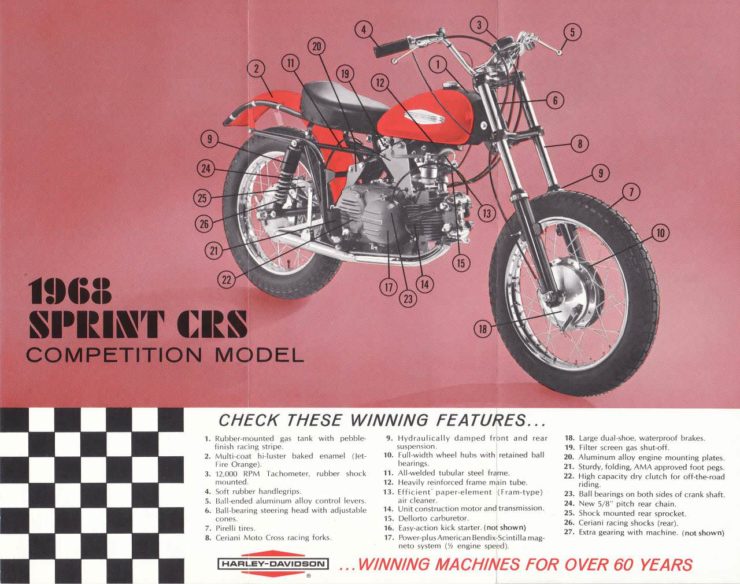 This period advertisement showcases the various features of the CRS, by the standards of the day it was a competitive motorcycle compared to similar four-strokes.

The Sprint series of Aermacchi Harley-Davidsons was designed for either dual sport or off-road use, they have a thick tubular steel backbone frame, the engine is used as a stressed member, and it’s fitted with front and rear suspension.

The engine is an Aermacchi 250cc unit angled almost parallel to the ground, this was done to give the engine optimal air-cooling and to help keep the center of gravity low. This engine uses unit construction, it has a built-in 4-speed transmission that sends power to the rear wheel via a standard chain drive.

A period review of the Aermacchi Harley-Davidson Sprint CRS was almost effusive in its praise, noting that the CRS was a match for the other 500cc scrambler they took almost on the test. Interestingly they also noted that the bike would be very suited to both flat track and TT Steeplechase racing – a prophetic prediction as it turned, out as the model proved very popular in smaller displacement flat track racing. 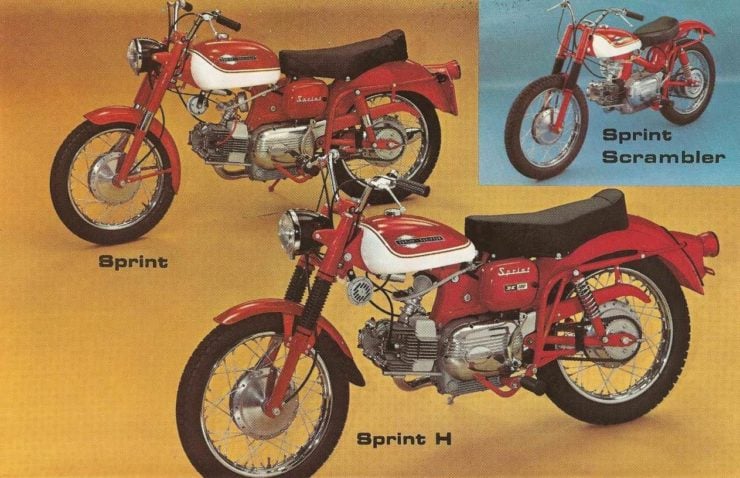 The Sprint and Sprint H were the road going versions of the model range, they came with larger rear fenders, a front fender, a speedometer, a headlight, brake light, etc to ensure they would be road legal.

The bike you see here is a beautifully restored 1976 example of the Aermacchi Harley-Davidson Sprint CRS.

This model was designed for the North American market and as such, it was a rare sight in Italy, despite the fact that this was where it had originally been build.

This particularly CRS was imported from the United States back into Italy in 2010 where it was nut and bolt restored in 2011. The bike is now accompanied by a Associazione Registro Storico Italiano Motocicli Aermacchi certificate, and some additional paperwork including a State of California Motorcycle Certificate of Ownership, the 2010 import documents, and a few bills. 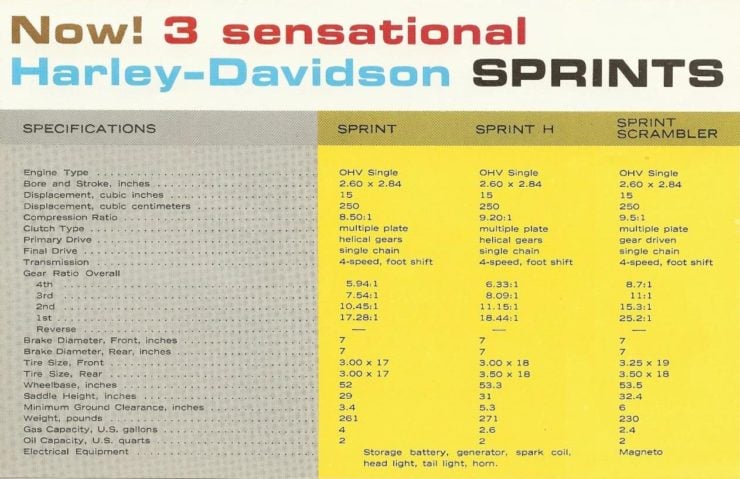 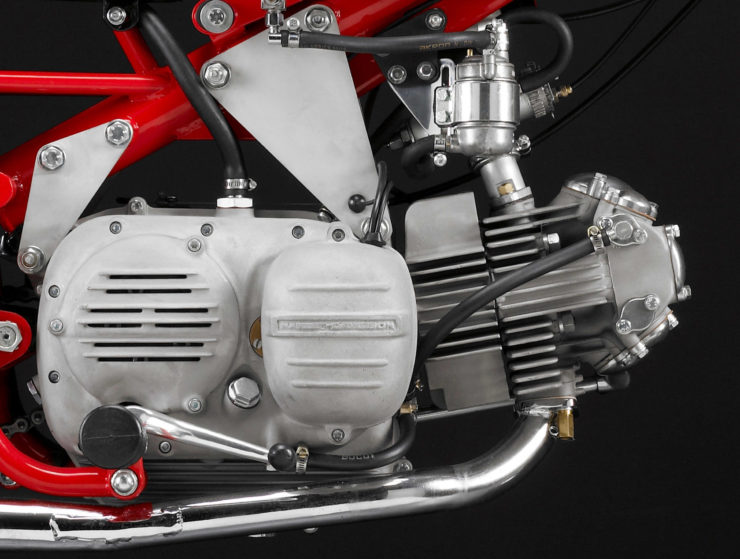 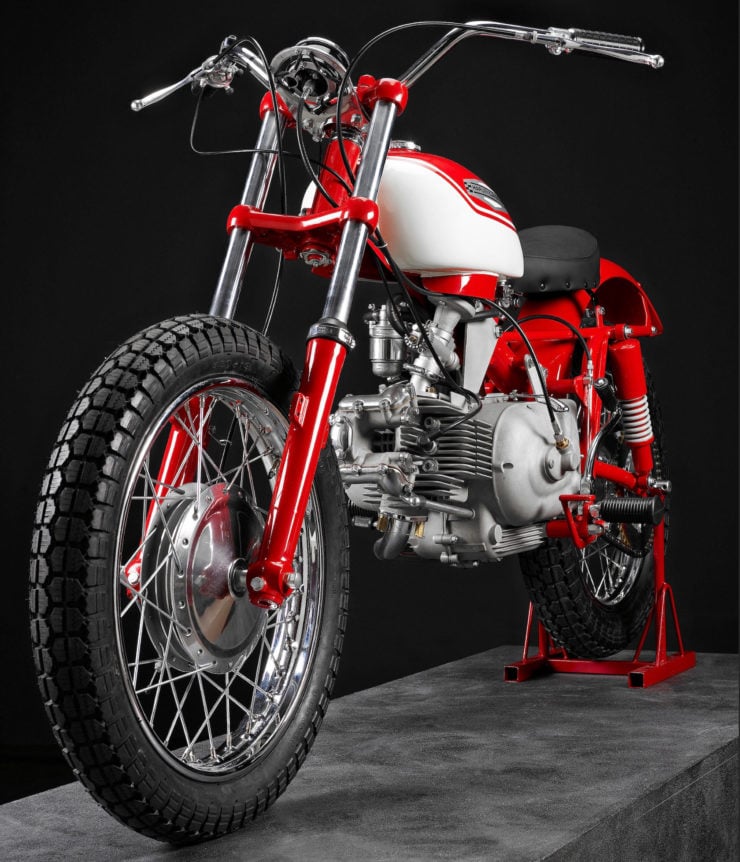 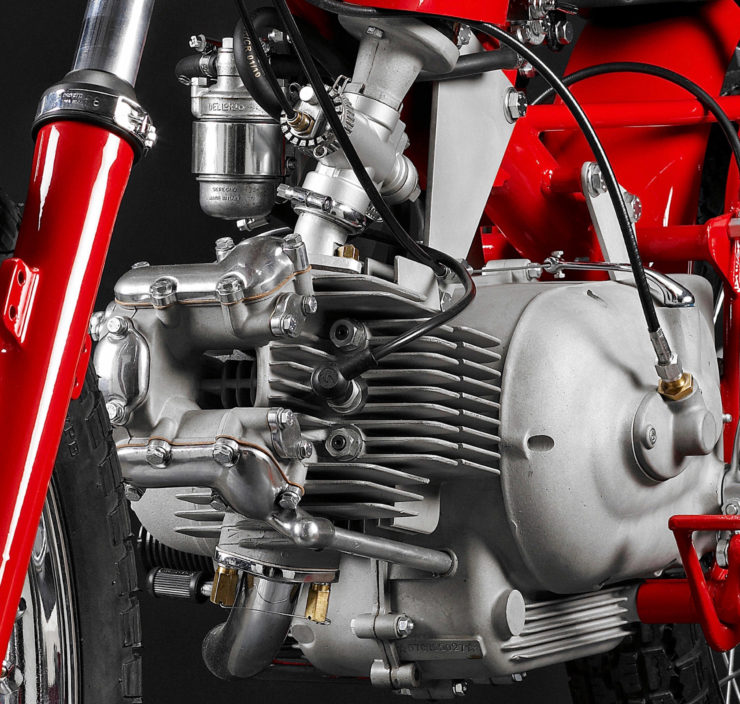 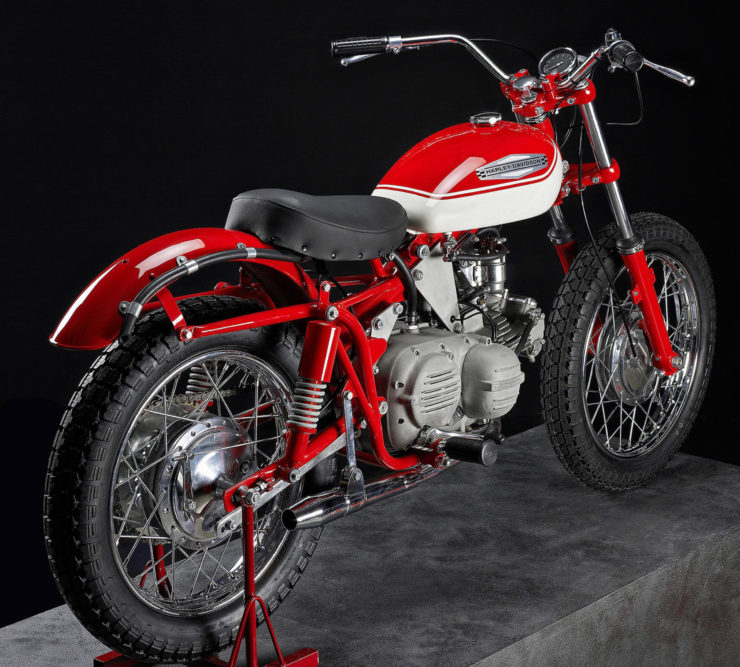 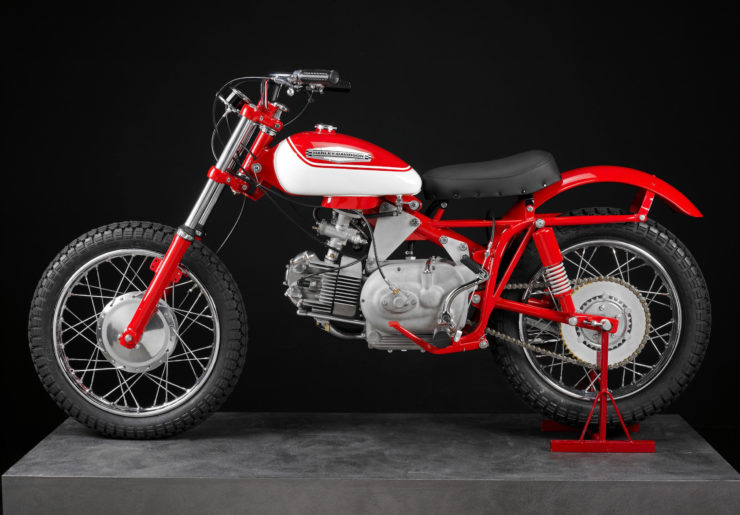 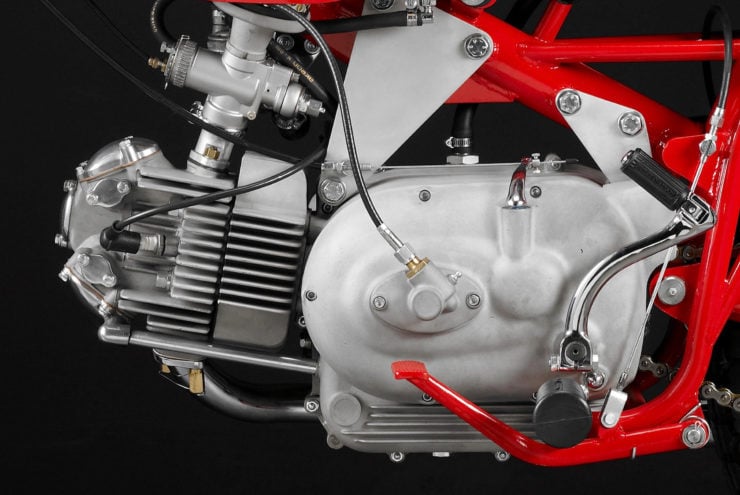