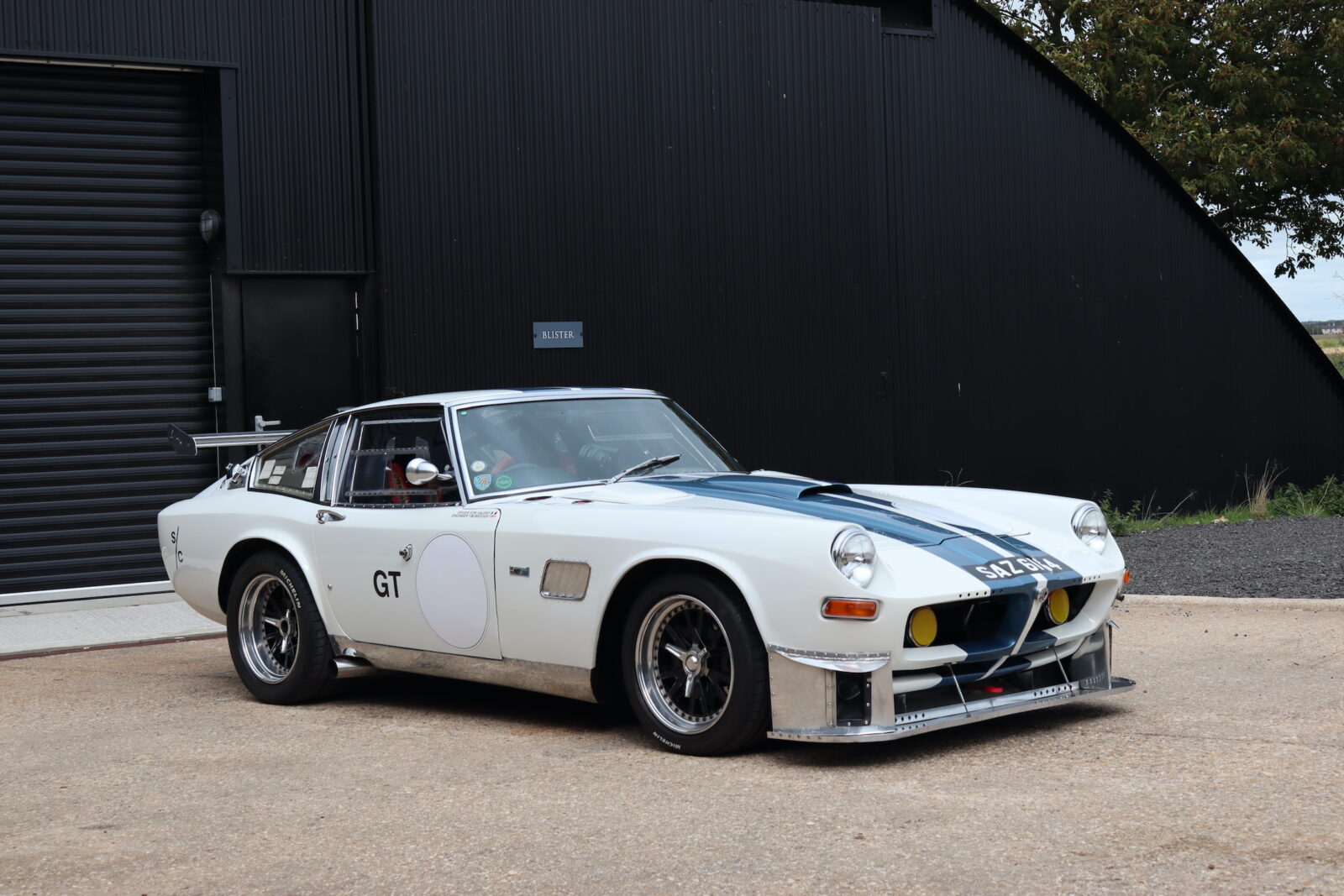 The AC Frua was built on the same chassis as the mighty AC Cobra 427 Mark III, though it was stretched by 6 inches to give the car a little more room for a luxurious GT-style interior.

The relationship between Britain’s AC Cars and Carroll Shelby is well-known, they formed a partnership that resulted in the Shelby Cobra, sometimes called the AC Cobra, which became one of the most successful and beloved sports cars of its time.

The first Cobras had a chassis and body built by AC Cars in Britain and then shipped to the United States for the engine and transmission to be fitted, along with general finishing.

Later Mark III versions of the Cobra used 4″ tubular steel chassis that had been developed in collaboration with Ford, this chassis was built for better rigidity and in order to allow the car to accept Ford’s big block V8s. The new Shelby Cobra 427 was released in 1965 and it got the people over at AC Cars thinking – if they could get access to this new chassis and drivetrain package they could develop their own body for it and release it as their own new grand tourer.

Carroll Shelby was one who famously never missed an opportunity to do a deal, so a deal was done and AC had access to everything they needed for a new GT car that could rival the best coming from Italy and England. 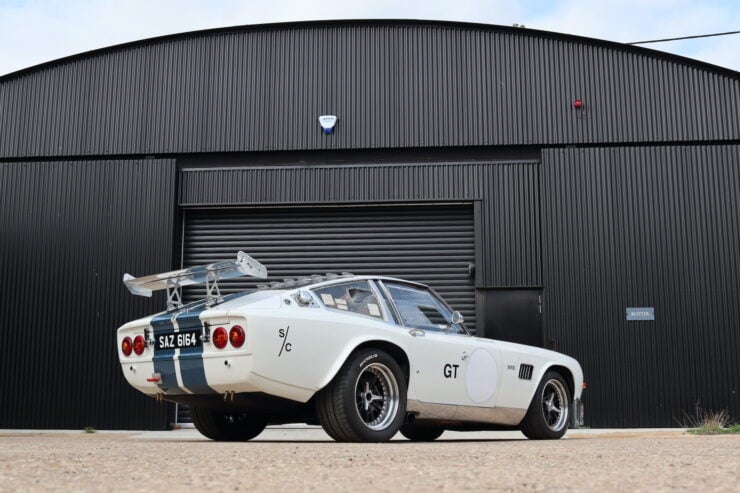 Above Image: This car has been extensively modified for vintage motorsport events, and it needs a new owner to get it back on track.

The only left to do was to get a body designed and built for the new AC. This part of the car’s history is a little more hazy however we do know that they struck an agreement with Frua in Italy who would both design and build the steel bodies for the new car, hence the final model name: AC Frua.

The design of the car has been compared with the Maserati Mistral which was also penned by Pietro Frua, the similarity is remarkable and the cars were being manufactured at the same time, although the Mistral was designed and released three years prior to the AC Frua.

Interestingly the two cars shared no body panels in common, and the only interchangeable parts are said to be the front quarter windows and door handles.

The process to build each car was complex. The rolling chassis were fabricated by AC Cars in England before being shipped to Italy to have their bodies fitted. One complete they were shipped back for the installation of the drivetrain and finishing.

This process led to exorbitant overhead costs which could only be recouped in the final sales price, and so the car was £5,573 – a remarkable sum for the day particularly when you compare it to the cost of a new Aston Martin DB6 at £4,460 or a new Jaguar E-Type at just £2,225.

When it was first released as a two-seater convertible at the 1965 Earls Court Motor Show the new AC Frua caused a sensation, the combination of Italian, American, and British influences had created a truly multi-national sporting GT car that could keep pace with the best in the world. 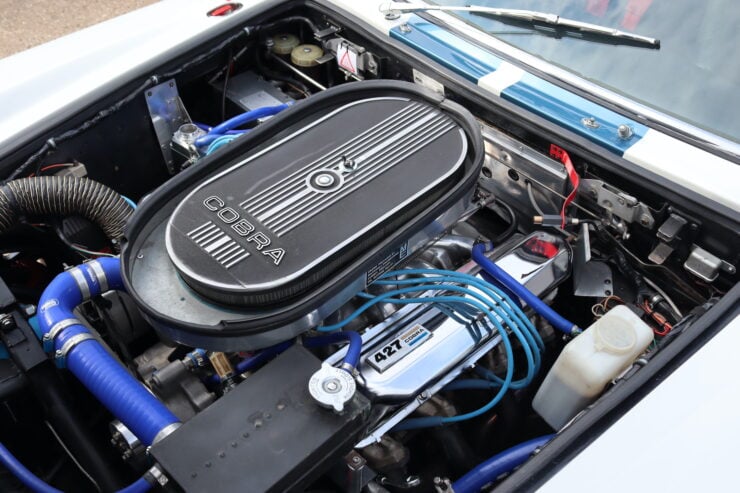 Above Image: This AC Frua is fitted with a highly-modified Ford 427 cubic inch V8 producing a prodigious 580 lb ft of torque.

A year later in 1966 the fastback coupe was released at the Geneva Salon and it proved equally popular. AC would keep the car in production from 1966 until 1973, due to the rather expensive nature of them just 80 would be built, 51 convertibles and 29 coupes.

Customers could order their new car with either the Iron “big block” Ford FE 428 or the higher performance Ford 427 engine (side oiler), these engines produced 345 hp with 474 lb ft or 385 hp with 460 lb ft respectively.

The AC Frua you see here has been considerably modified for racing, the car has competed extensively in its current trim and it would now suit a new owner who’s going to put some work into it for more racing, or someone who wants to return it back to factory stock.

The staggering list of modifications applied to this car is a thing to behold and I won’t repeat it all here, however you’ll find it all listed on the page linked below. The car is fitted with doors, a boot, and bonnet skin made from aluminum which was all fitted by AC in their Brooklands factory in the 1970s. In the engine bay you’ll find the 427 cubic inch Ford “side oiler”, an engine that was raced extensively in period NASCAR competition.

This engine has been significantly modified for racing, it has a forged-steel cross-drilled crank stroked to displace 8.3 litres (482 cubic inches), cross-bolted main bearing caps and screw in core plugs, solid tappets and aluminium Drove roller rockers, a high-lift camshaft, all fitted with ARP grade eight bolts, and it produces approximately 580 lb ft of torque.

If you’d like to read more about this car or enquire about taking it home you can click here to visit the listing on CarVault Co. It’s currently listed for £110,000 and it’s still available at the time of writing. 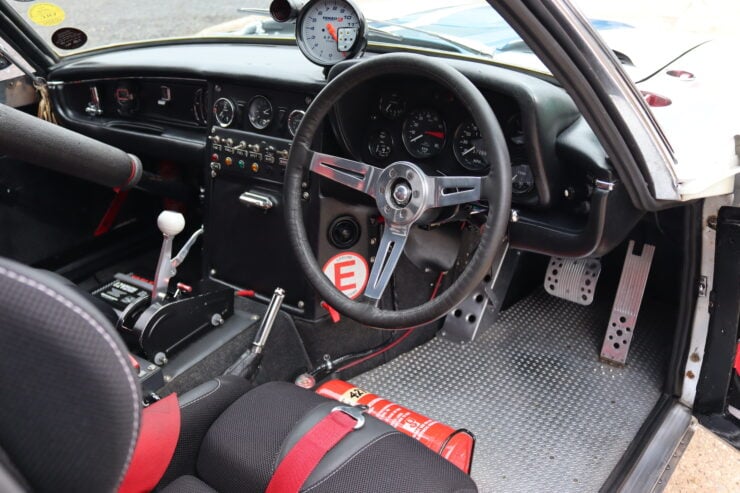 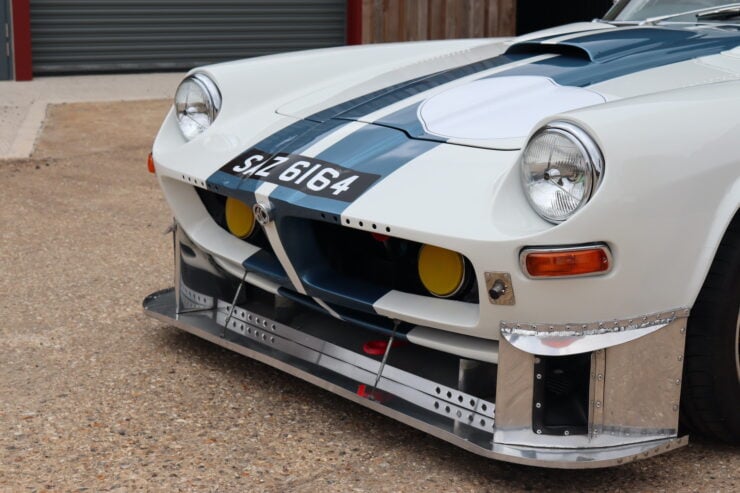 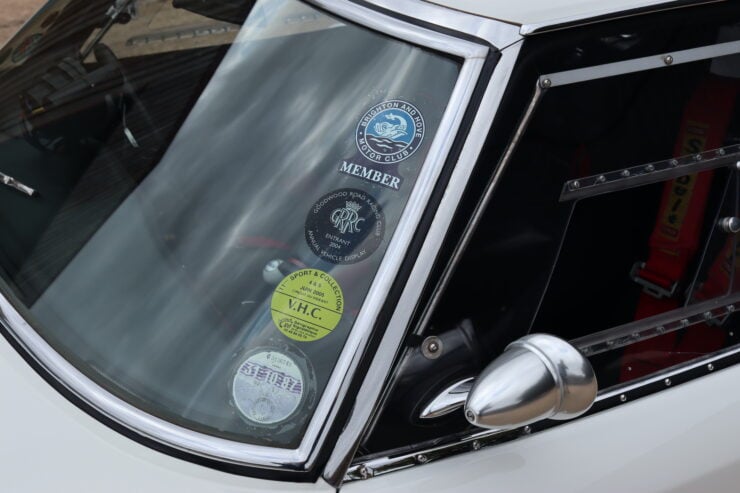 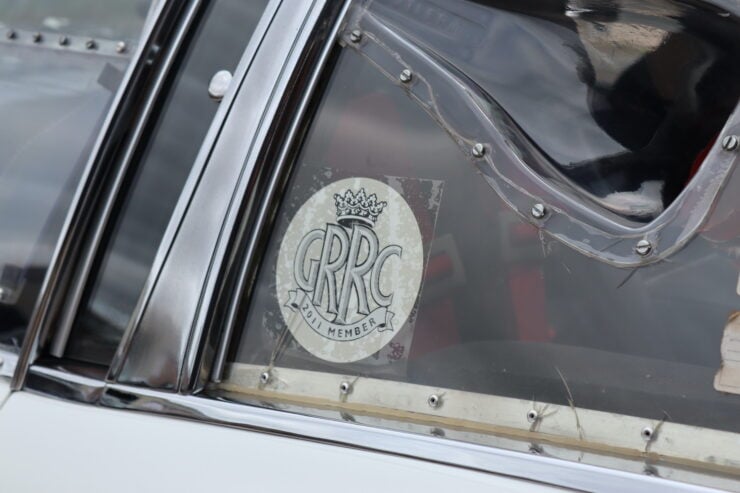 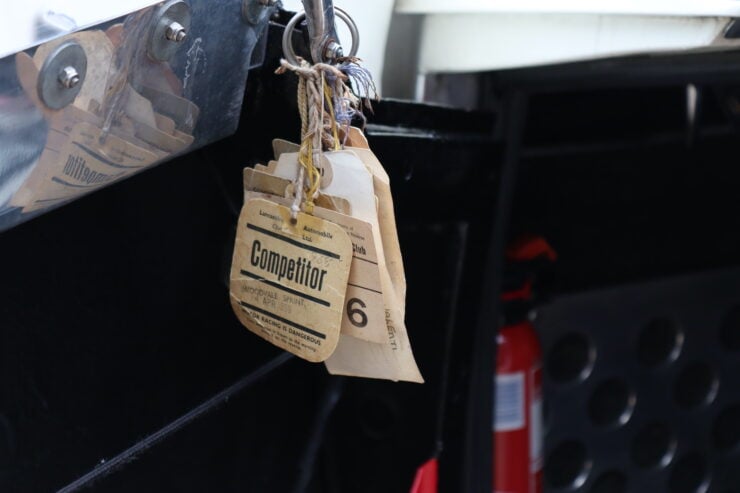 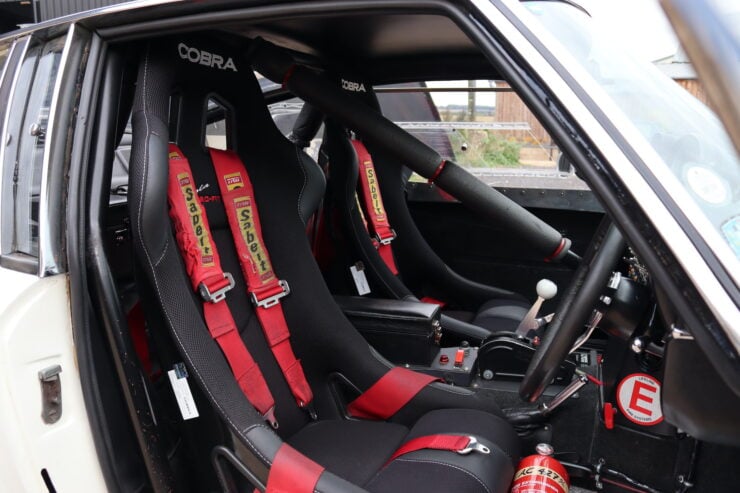 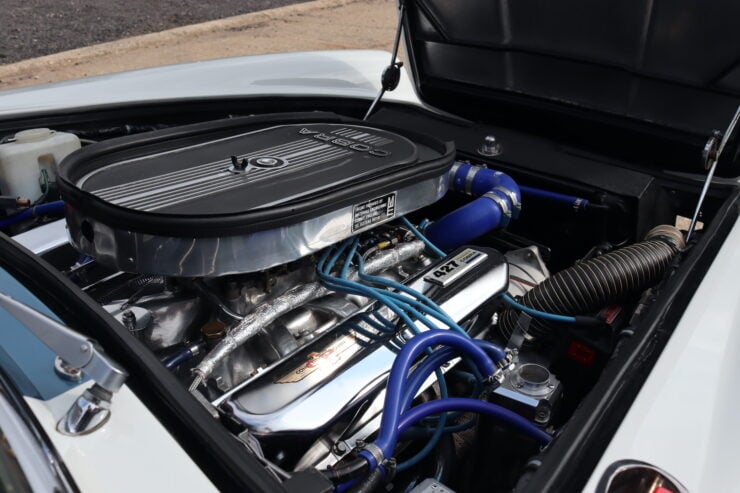 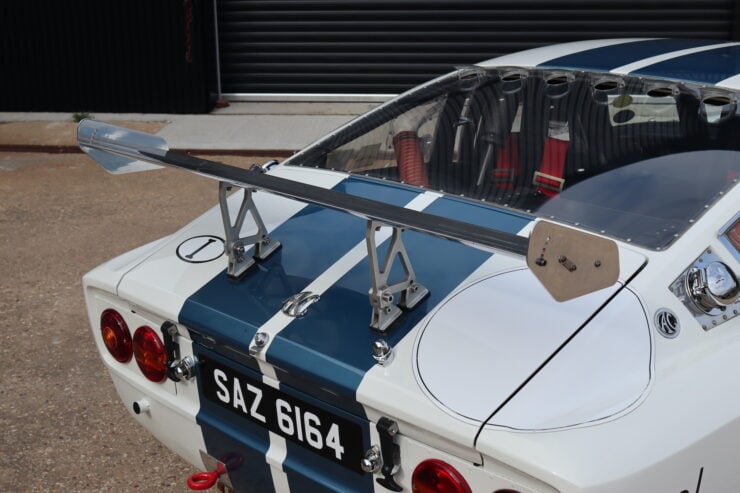 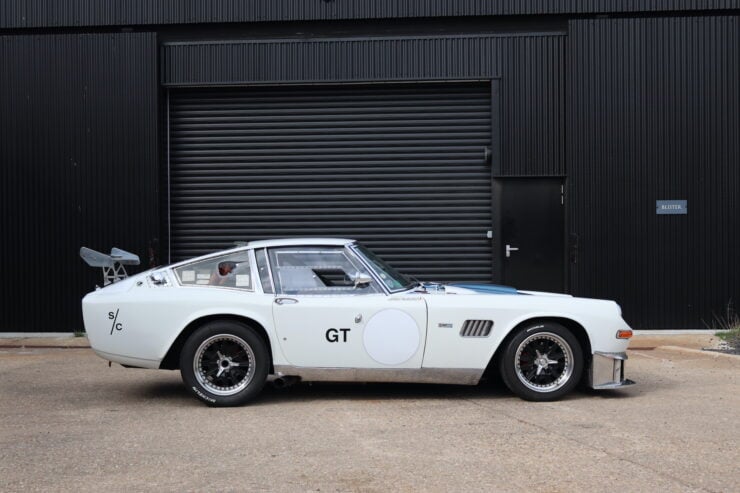 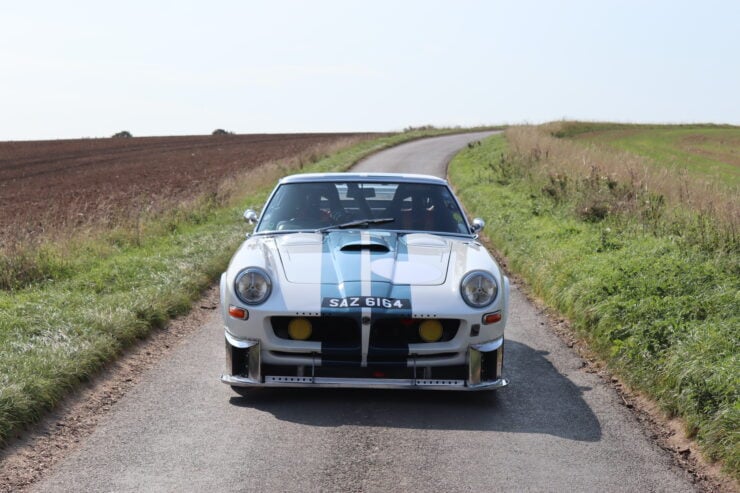 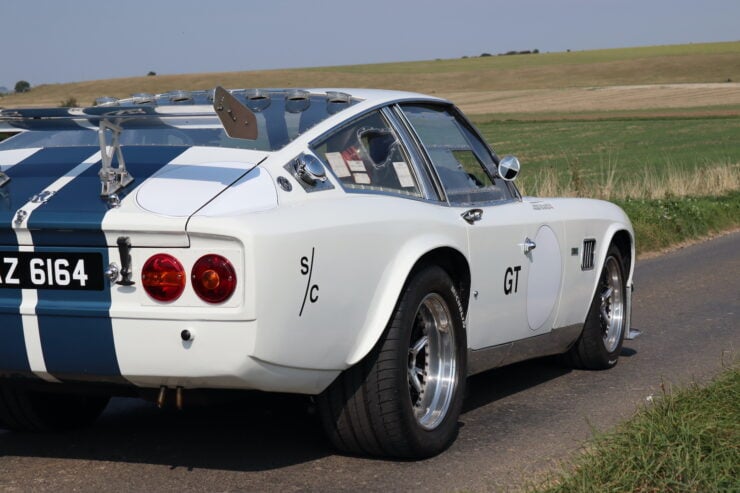 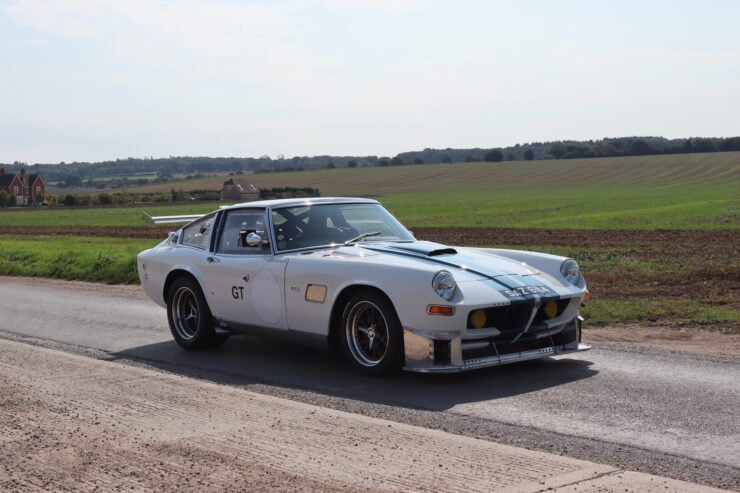 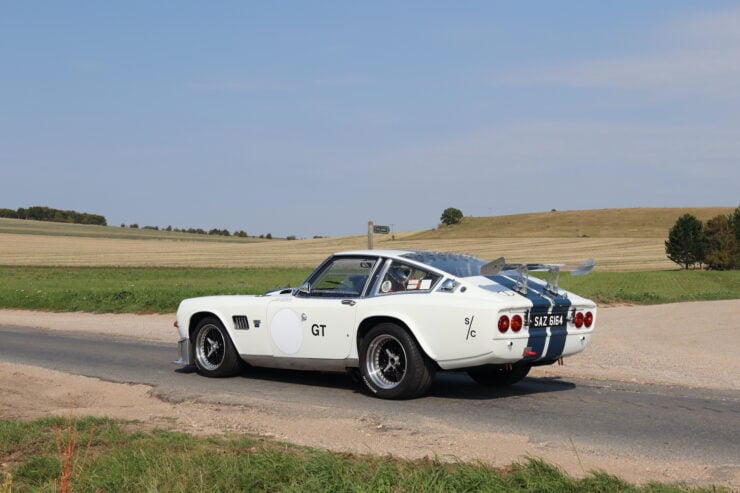 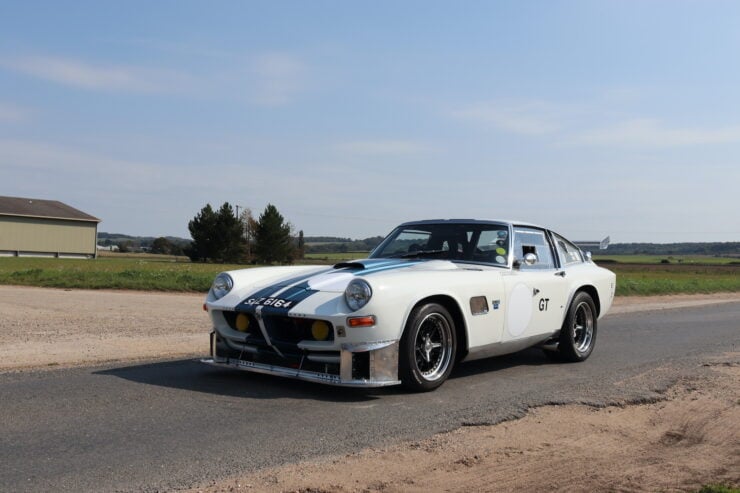 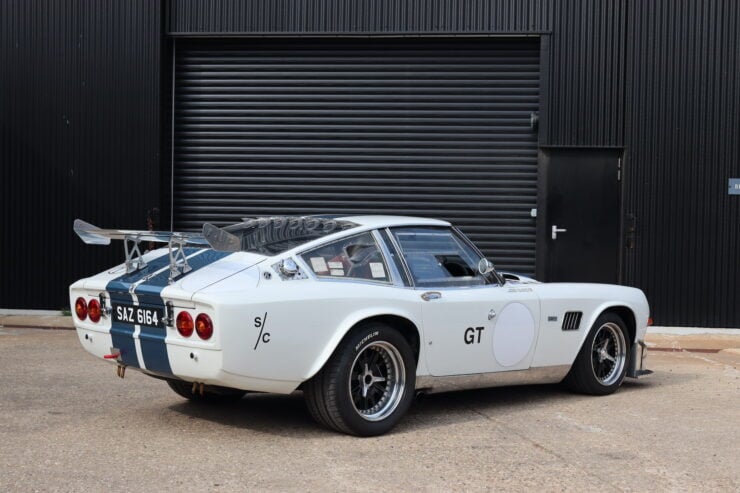