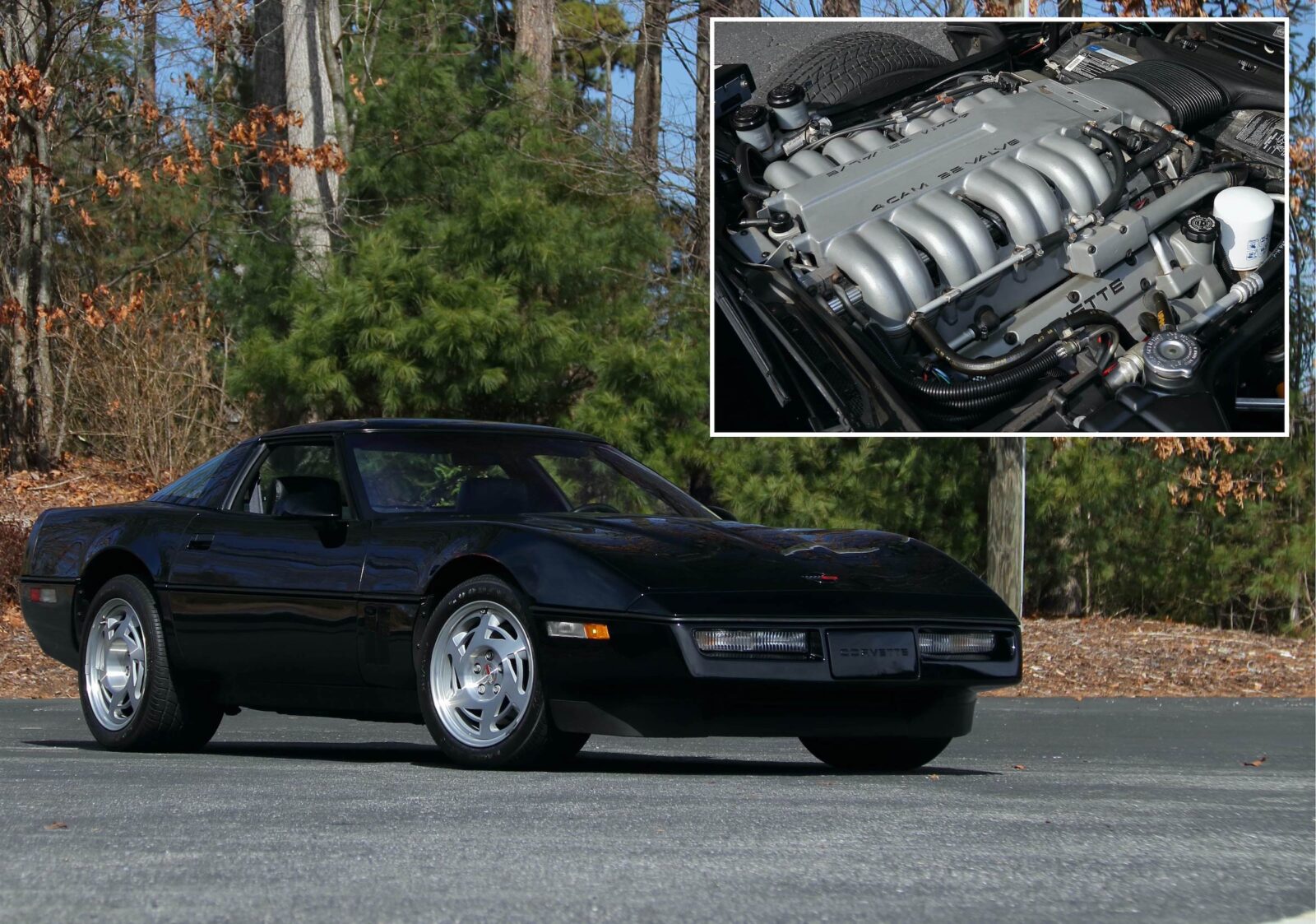 The Chevrolet Corvette ZR-1 (C4) was released in 1989 as a home-grown American challenger to the dominant supercars of the day – the Ferrari Testarossa, the Lamborghini Countach, and the Porsche 911 Turbo.

At its heart, the ZR-1 Corvette is powered by an engine that was developed not in America, but over in Britain by Lotus. General Motors bought Group Lotus, the famous English performance car manufacturing firm in 1986 and co-developed the ZR-1 package with them, including the engine, braking, steering, and suspension systems.

The original plan for the C4 ZR-1 was for it to be the fastest production car in the world, this didn’t come to pass however the final production ZR-1 would break seven international and world records at a test track in Fort Stockton, Texas in 1990, all verified by the FIA.

The Lotus-developed engine in the car was dubbed the LT5, it proved to be a remarkably resilient engine given its complexity and power output which ranged from 375 to 405 hp depending on model year.

The LT5 is an all-alloy V8 with double overhead cams per bank, four valves per cylinder, fuel injection, an 11.0:1 compression ratio, and a unique induction system that could shut down half the intake runners when in low power mode for fuel efficiency.

This engine compared favorably with the V12s used in the Testarossa and Countach which produced 385 hp and 374+ hp respectively. The other performance specifications also held up well, the top speed of the ZR-1 is ~180 mph, the same as the Testarossa and 5 mph less than a comparable Countach.

The 0 to 60 mph dash can be dispatched in 4.9 seconds in a C4 ZR-1, the Testarossa takes 5.8 seconds to do the same and the fastest production version of the Countach does it in 4.7. 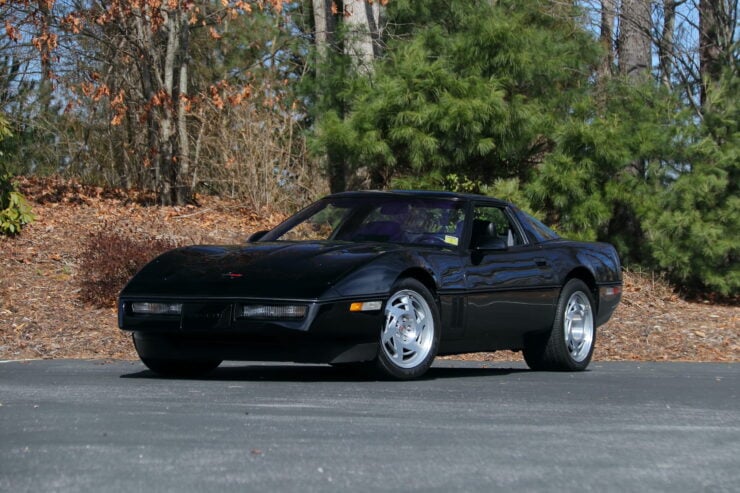 Above Image: From the outside the C4 ZR-1 looks almost the same as the regular model, however its performance potential is vastly more impressive.

The LT5 engine proved difficult to build and assemble, so much so that Chevrolet didn’t have a factory capable of building it. Instead they contracted the engine building to Mercury Marine who had plenty of experience working with complex all-alloy engines.

The modifications made to the C4 ZR-1 were added to compliment the LT5 in the engine bay, the vehicle was fitted with a unique 6-speed manual transmission developed by ZF called the ML9. Power was sent to the limited slip differential rear end and out through the P315/ 35ZR-17 Goodyear Eagle Gatorback tires to the asphalt.

The Bilstein-developed suspension system was somewhat similar to the system used on the Porsche 959. It was called the FX3 system and it used a gas-over-oil shock absorber that allowed the driver to electronically control the flow of oil inside the hollow center shaft. This gave the car six damping settings in each of the three driving modes: Touring, Sport, and Performance.

The rear end of the car was notably wider than that on the regular C4 Corvette however there were very few external clues that the car you were looking at was something special – a criticism that was made at the time by drivers who wanted there world to know their car cost twice as much as a normal C4 and had supercar levels of performance.

A little over 6,900 examples of the ZR-1 C4 Corvette were built during its production run. After it was discontinued in 1995 Chevrolet wouldn’t have another Corvette capable of matching its performance until the release of the Z06 C5 Corvette in 2001. 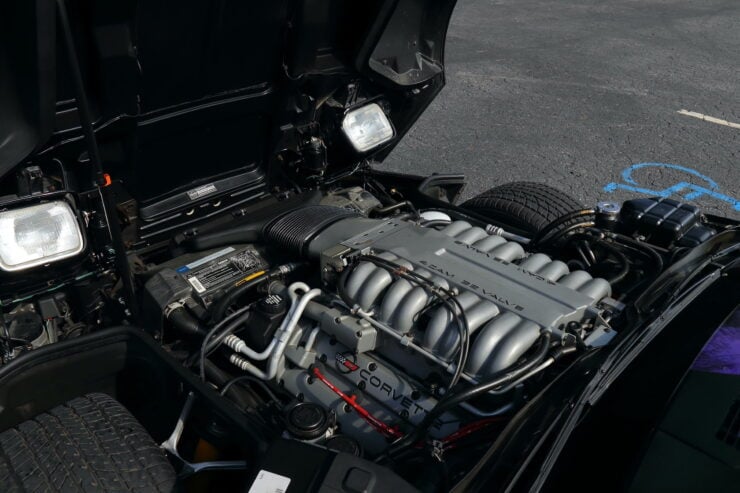 Above Image: The quad cam 32 valve V8 is capable of between 375 and 405 hp depending on model year – on par with the Ferrari Testarossa and Lamborghini Countach from the same era.

Today the C4 ZR1 remains one of the best bang-for-buck performance car bargains in America. Good examples can be bought for under $30,000, some selling for under $20,000, largely due to the lack of popularity surrounding the C4 Corvette in general.

This does seem to be slowly changing as 80s-era cars become Radwood cool, and you have to wonder if the C4 ZR-1 is poised to see a rapid gain in value when it’s rediscovered by the car community at large.

With its black over black color scheme the car has an almost Knightrider feel to it, and it comes with all the bells and whistles you’d expect including power steering, power disc brakes, air conditioning, tinted glass, power windows, locks, and seats, and a Delco Bose cassette stereo.

If you’d like to read more about this car or register to bid you can click here to visit the listing. It’s due to roll across the auction block with Mecum mid-May with no reserve. 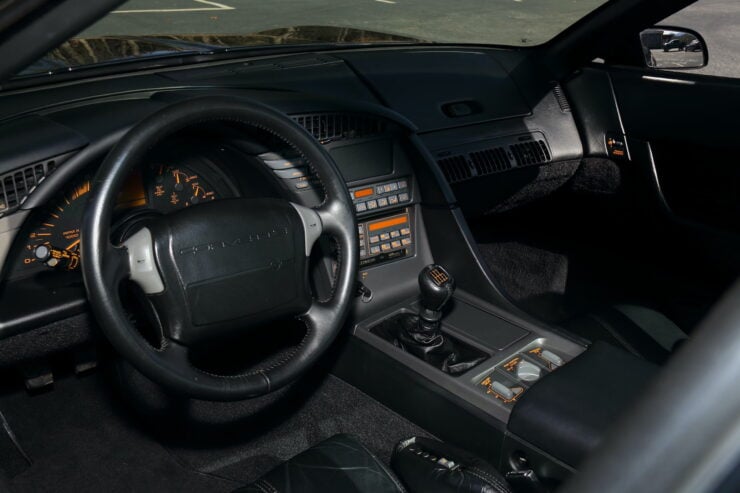 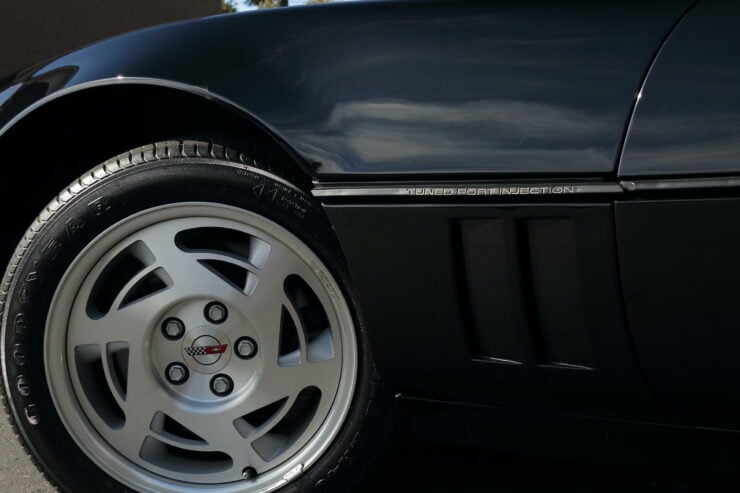 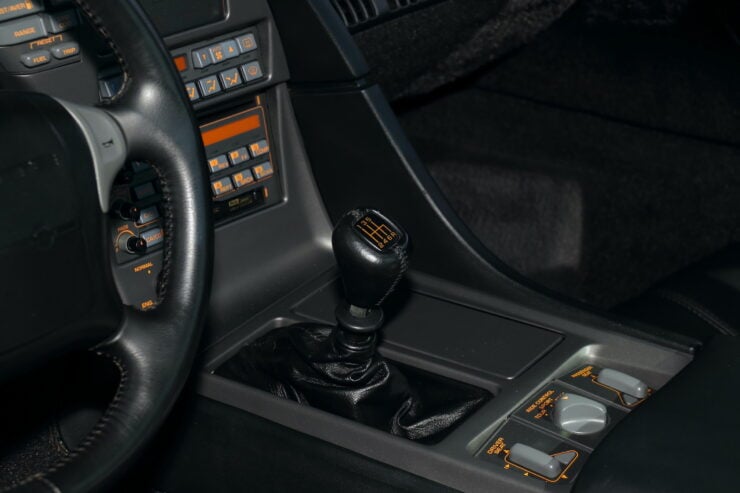 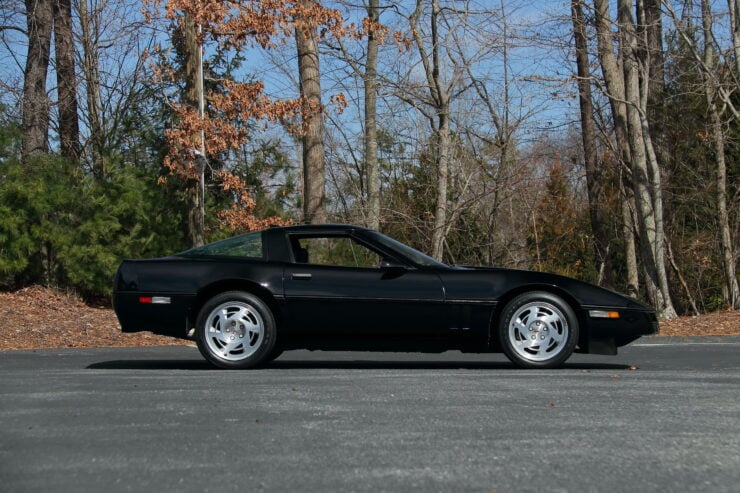 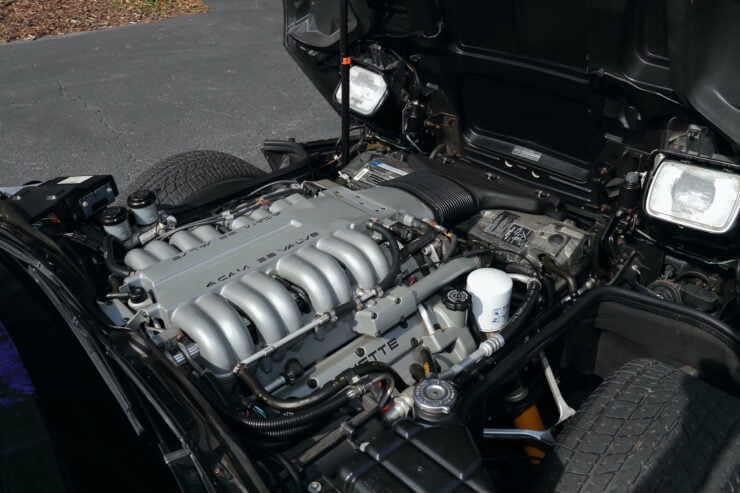 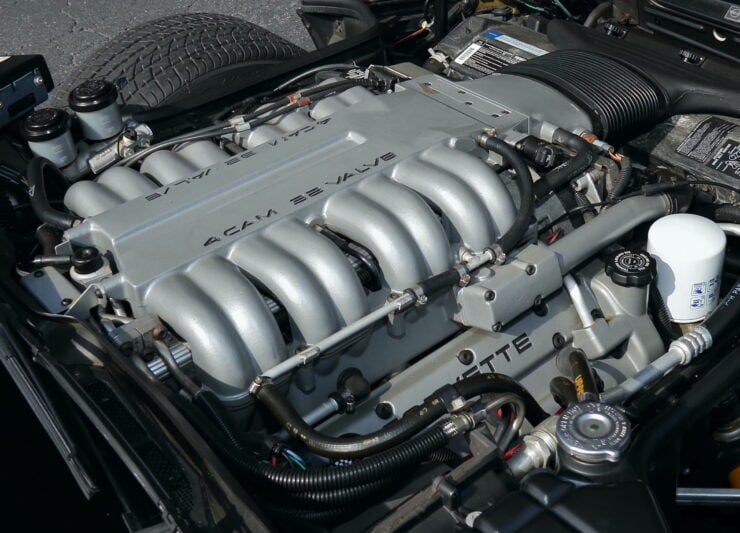 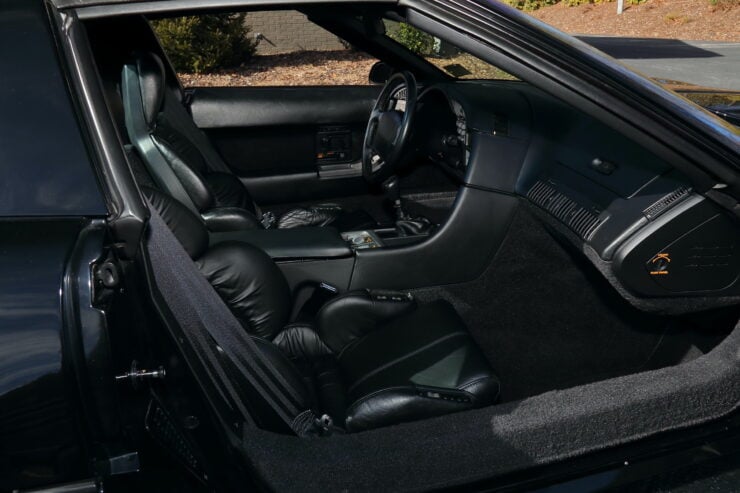 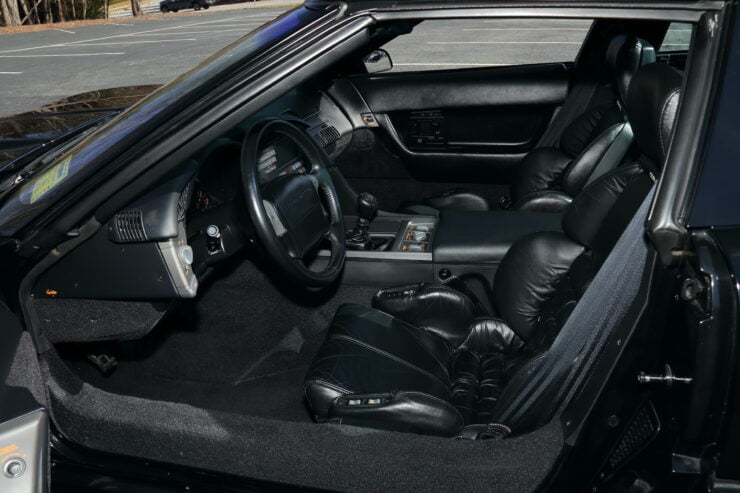 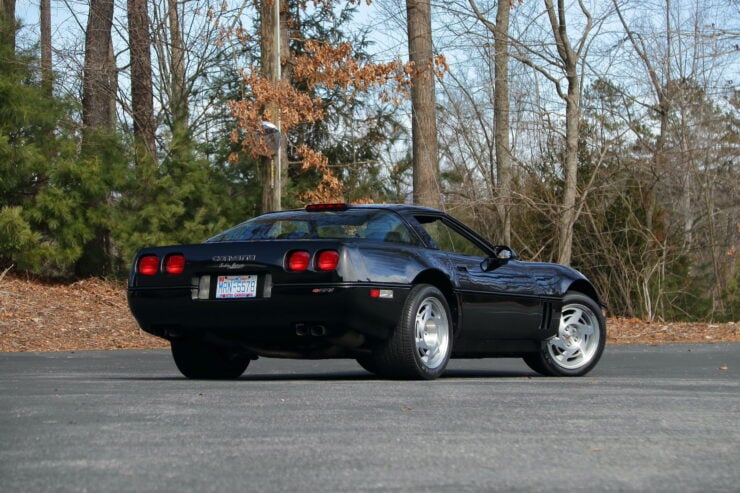 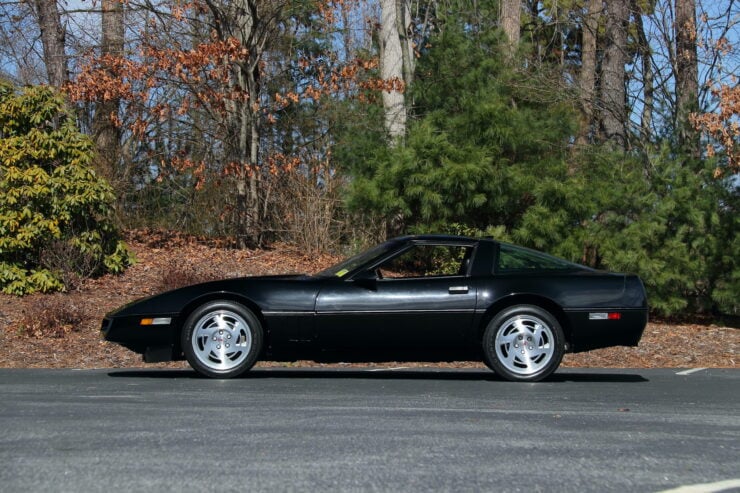 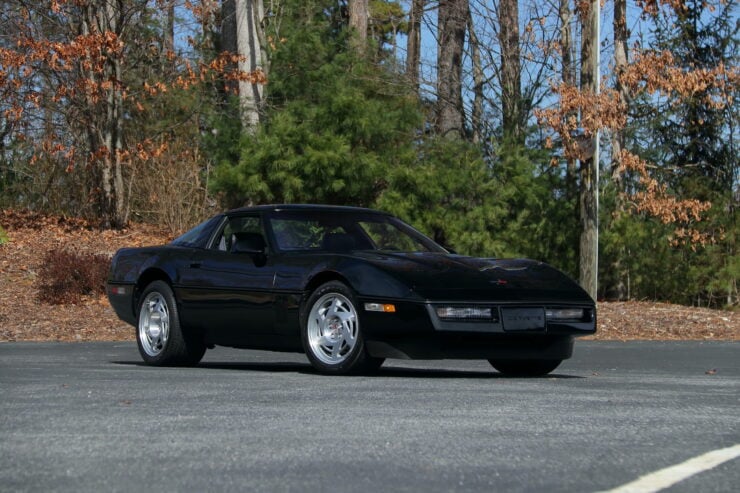