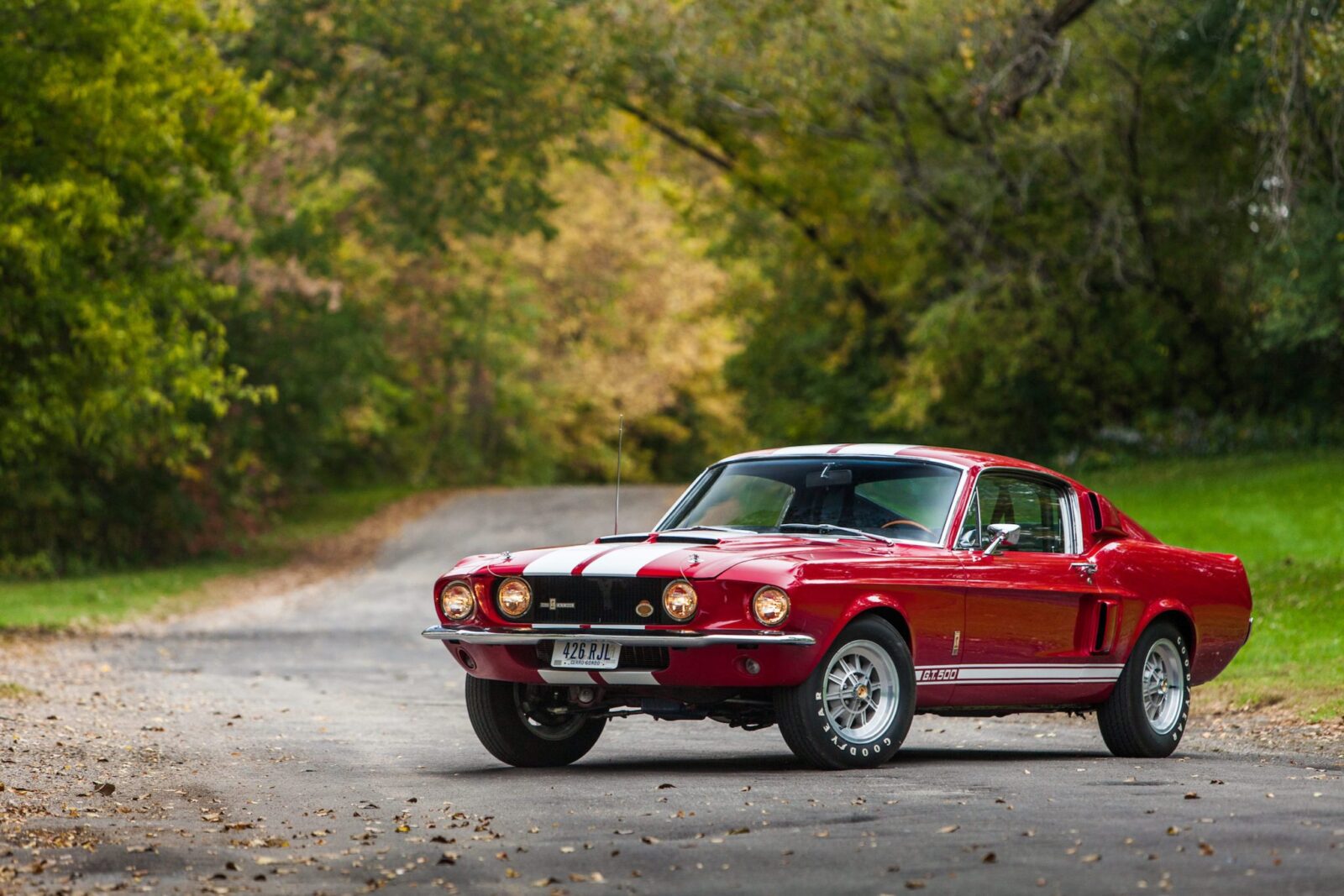 The Shelby GT500 was introduced to the press at New York’s Tavern-on-the-Green Restaurant in early 1967, it represented a departure from the previous Shelby Mustangs in that it provided more comfort and convenience than the fire breathing Shelby GT350.

Describing his new Mustang, Carroll Shelby was quoted as saying “This is the first car I’m really proud of”, which is a huge statement considering the man’s already impressive back-catalogue of Shelby-badged automobiles.

A Short History of the ’67 Shelby GT500 Mustang

1967 saw the first major design of the Ford Mustang. Originally introduced in 1964, the Mustang had launched the “pony car” market genre and triggered an arms race amongst the big American automakers to build the quickest mid-sized V8 two-door.

The primary motivation for the 1967 redesign was the need to increase the space under the hood, to accommodate larger V8s, and allow Ford to remain competitive in the white hot American marketplace.

Carroll Shelby realised that this new Mustang with a larger space under the hood would be able to accommodate a truly huge engine – a road-going version of the 427 cubic inch V8 that Ford and Shelby had taken to Le Mans in the back of the GT40, and beaten Ferrari at their own game in 1966 and 1967.

Shelby’s idea of taking a Le Mans winning 7 litre V8 and loading it into a Mustang was a major PR coup for Ford, particularly as the hugely popular American victories at Le Mans were still very much fresh in the minds of the American public. In order to maximise on the connection to the race cars, Ford dubbed the 428 cubic inch V8 used in the GT500 the “Cobra Le Mans”. Internally a lot had been changed on the road car engine including the bore and stroke – but it retained the spirit of the Le Mans winning engine, and the motoring public loved it.

Each 1967 Shelby GT500 started with a regular fastback 390 Mustang, the team at Shelby American removed the hoods and trunk lids, replacing them with newly styled fibreglass replacements including a functional hood-scoop up front and a lip spoiler in the rear. The side air intakes were functional as well – used for rear brake cooling.

Klaus Arning was responsible for developing the suspension geometry, the same man who designed the suspension for the Ford GT40 and the Shelby Cobra II. In order to make the car easier to live with as a daily driver, power brakes had been fitted as standard, along with fast-ratio power steering, there was an optional fold down rear seat – and even optional air-conditioning.

Interestingly the ’67 Shelby GT500 is thought to be the first production car to offer a rollover bar as standard equipment. The tubular steel roll bar is padded to avoid unpleasant head-whacks for those entering the optional rear seats, and it’s welded to the chassis for improved stiffness.

The true hero in the story of the GT500 is the 428 cubic inch V8 under the hood. Shelby claimed it was capable of 355 hp but this figure was seriously questioned by those who drove them – the real number was over 400 hp. It’s likely the number was understated to to avoid too much scrutiny and keep insurance premiums low, not an uncommon phenomena in the US performance car market at the time.

This car was completed on July 7th 1967 by Shelby American in Candy Apple Red with a black interior, interestingly it’s one of the less common factory 4-speed fitted examples, which will significantly add to its interest from collector circles.

Just 2,044 GT500s were built by Shelby American in 1967, and many of them have suffered unfortunate drag strip, race track, and road accidents – so the surviving examples are worth significant scratch. Mecum Auctions are estimating that this restored example will sell for between $185,000 USD and $210,000 USD when they sell it at the Indy Auction due to be held between the 16th and 21st of May.

If you’d like to read more about the car or register to bid, you can click here to visit the official listing. 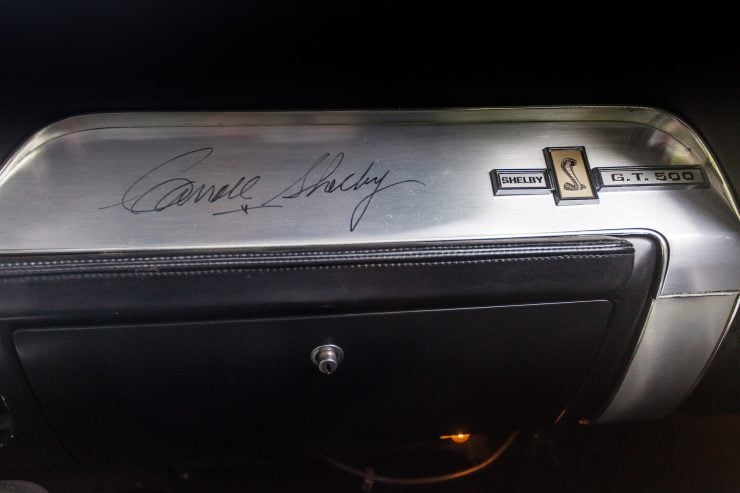 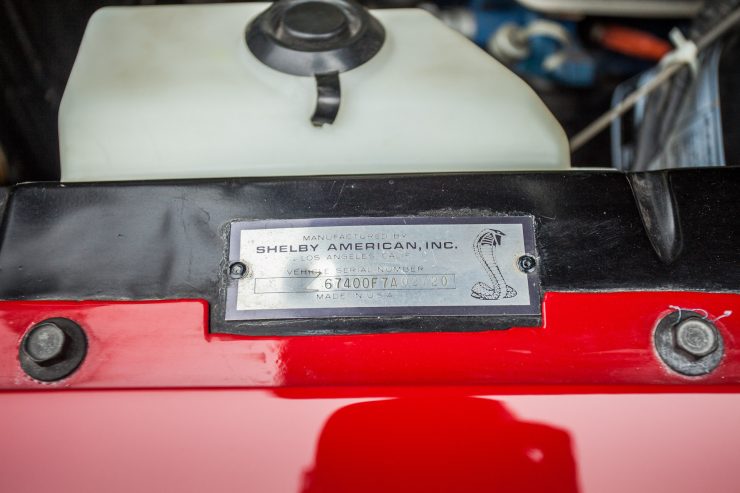 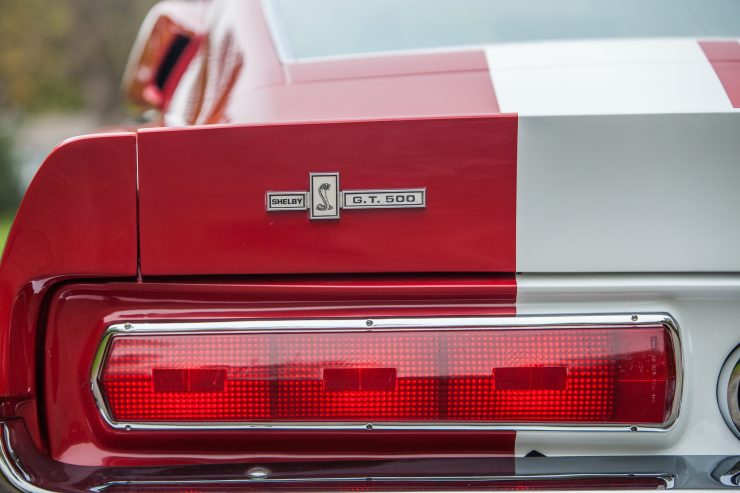 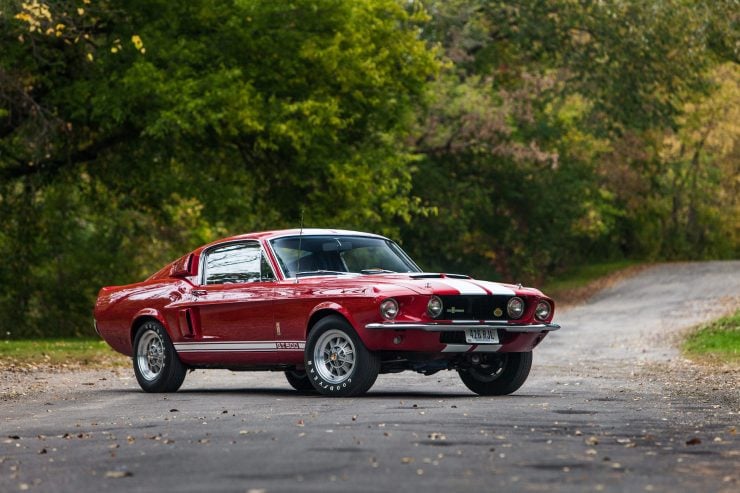 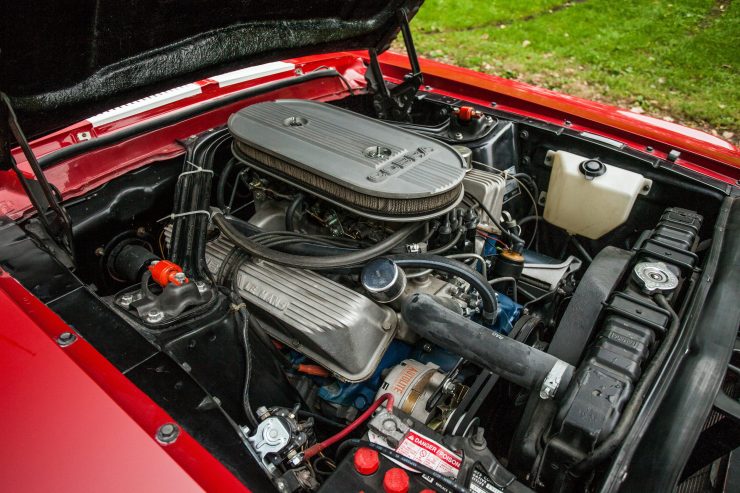 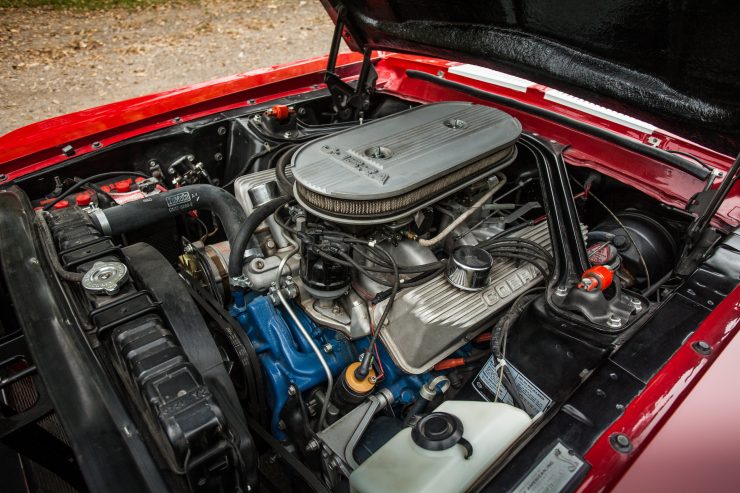 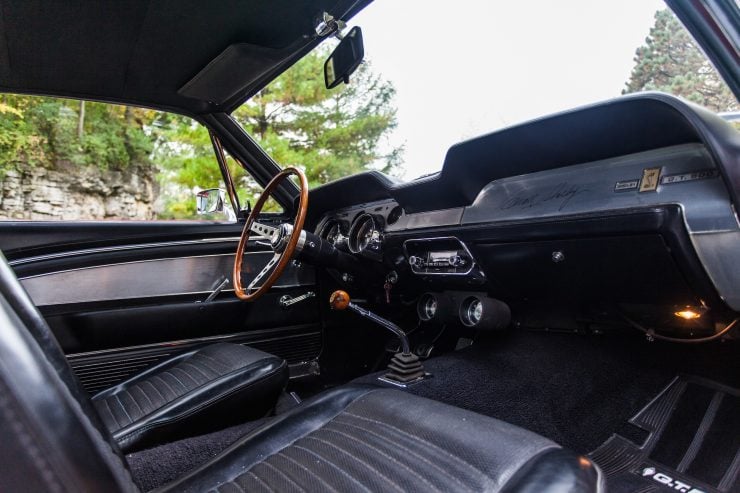 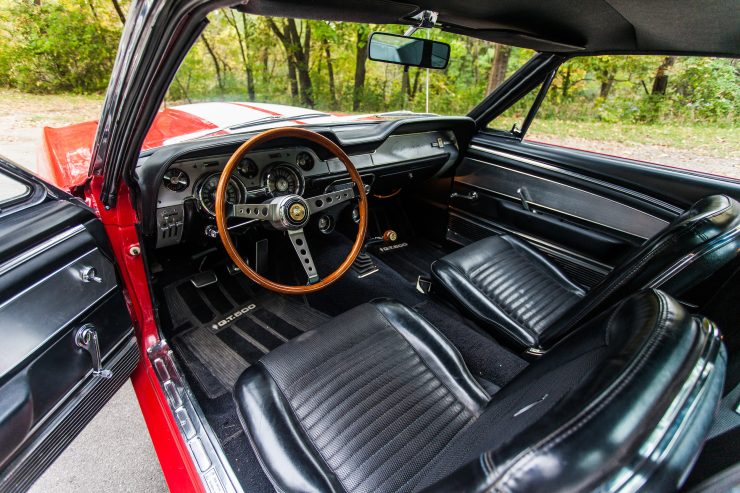 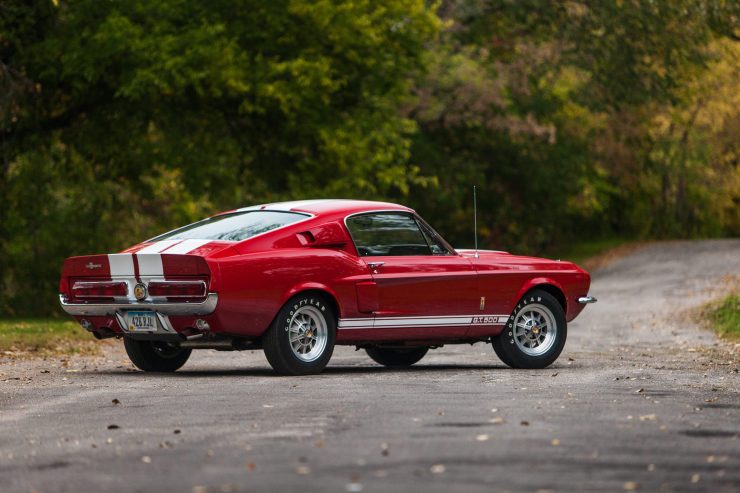 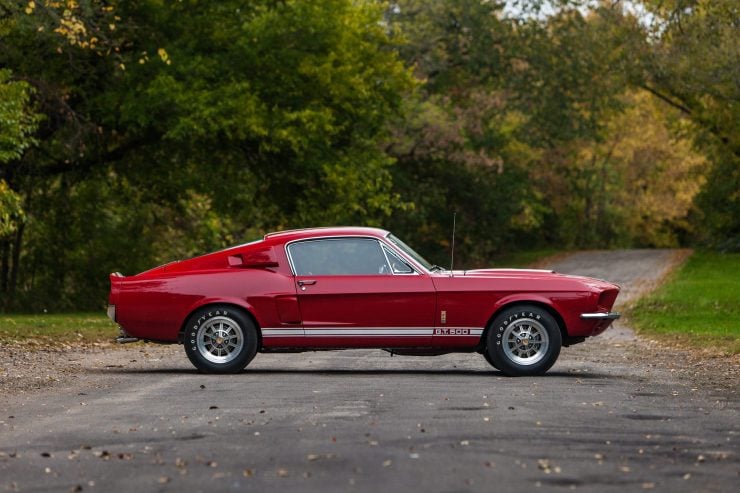 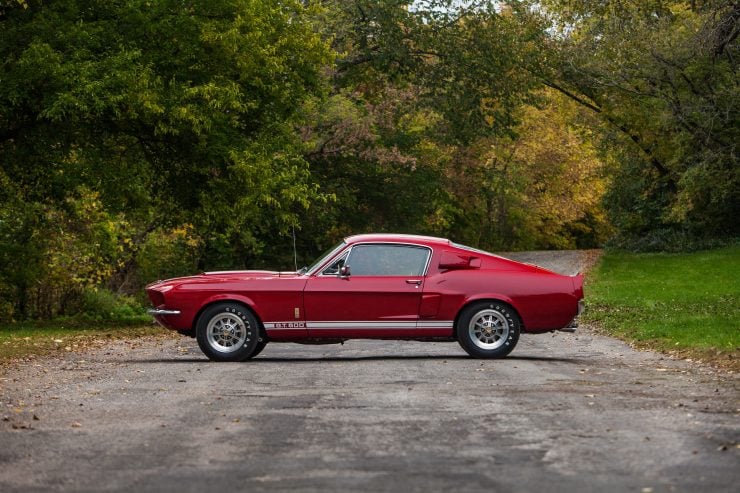 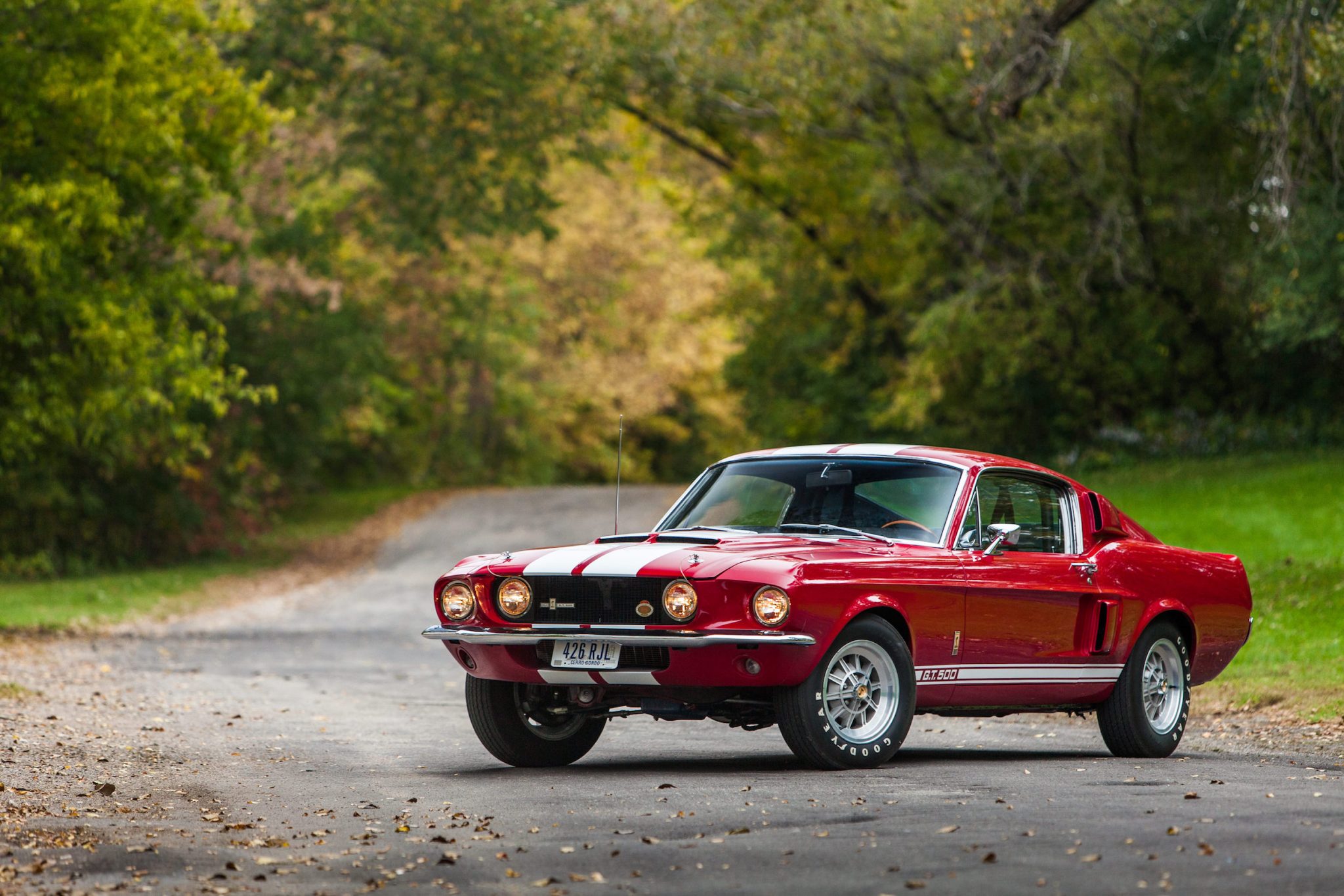