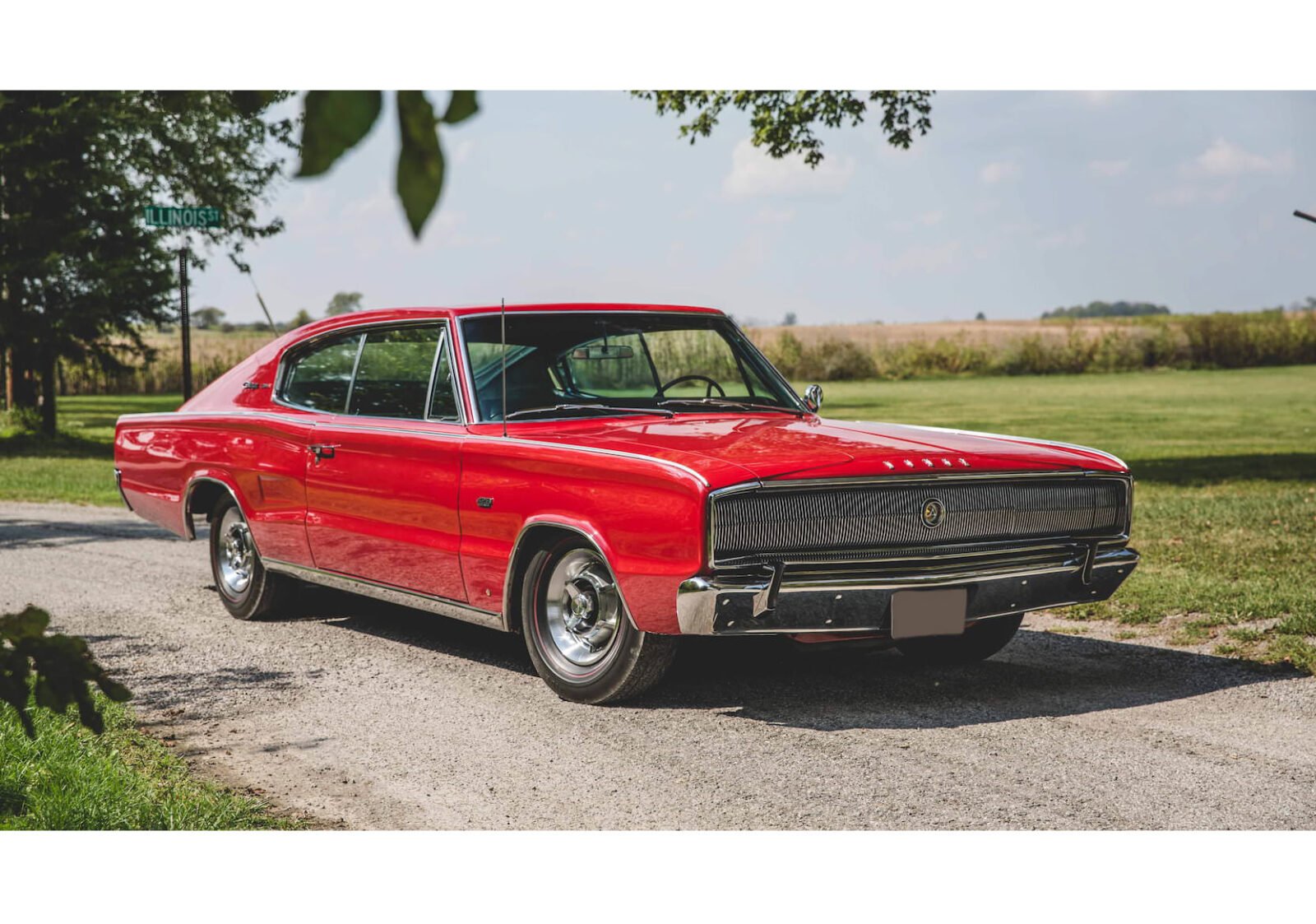 This is 1 of just 468 Dodge Hemi Chargers that were built in 1966, a year remembered by fans of the Mopar Hemi engine for David Pearson’s popular first NASCAR Grand National championship win, piloting his Cotton Owens-prepared Dodge Charger.

NASCAR had banned the 426 Hemi in 1965 under the guise of it not being readily available in the road cars of the time, though many have postulated that the ban was a result of the Hemis dominating the nation’s stock-car tracks in 1964.

The ban was lifted in 1966 as the 426 Hemi was now available in a few production vehicles as an option, including the Dodge Coronet, the Plymouth Belvedere, the Plymouth Satellite, and perhaps most importantly, the Dodge Charger.

The Charger was initially developed to appease Dodge Dealers, who wanted something that could compete with the hugely popular Ford Mustang, which had first appeared in 1964, and rapidly become a major best seller. Dodge wanted their Charger to fit in somewhere above the Mustang but slightly below the Ford Thunderbird in terms of cost and market positioning. Essentially, it was to be an American V8 GT car. 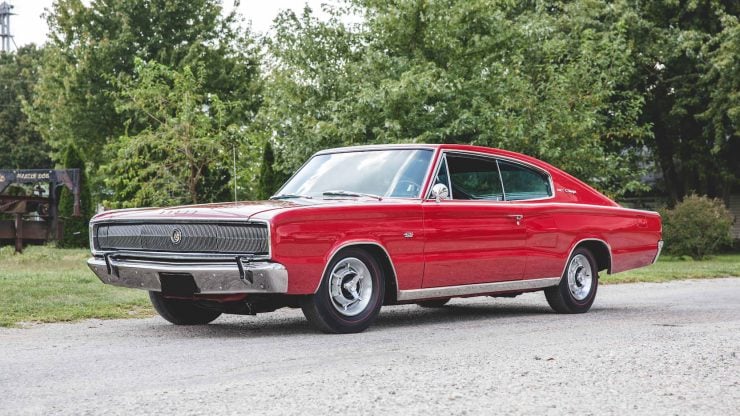 Chief Engineer for Dodge during the ’60s, Burt Bouwkamp, talked about the reasons for creating the Charger in July 2004:

“Lynn Townsend (President of Chrysler) was at odds with the Dodge Dealers and wanted to do something to please them. So in 1965 he asked me to come to his office – for the second time. He noted that one of the Dodge Dealer Council requests was for a Barracuda type vehicle.”

“The overall dealer product recommendation theme was the same – we want what Plymouth has. The specific request for a Mustang type vehicle was not as controversial to Lynn. His direction to me was to give them a specialty car but he said ‘for God’s sake don’t make it a derivative of the Barracuda’: i.e. don’t make it a Barracuda competitor.”

“We built a Charger “idea” car which we displayed at auto shows in 1965 to stimulate market interest in the concept. It was the approved design but we told the press and auto show attendees that it was just an “idea” and that we would build it if they liked it. It was pre-ordained that they would like it.”

The name “Hemi” derives from the hemispherical combustion chambers used in the Chrysler engine. The Hemi design offers low levels of heat loss in the head, and allows for two large valves to be fitted – perfect for a large capacity push-rod V8. 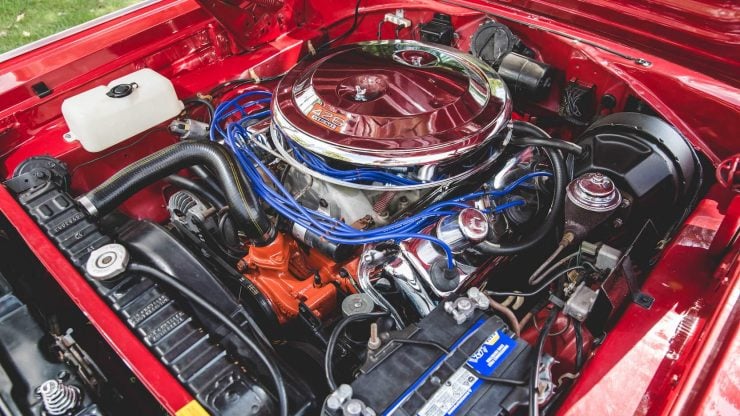 Chysler claimed that the 426 Street Hemi produced 425 hp, however period dyno testing showed that it actually produced over 433 hp in stock trim on pump gasoline. Torque figures were similarly impressive, with 472 lb.ft on tap. It’s a wonder anyone was able to keep tread on their skinny bias ply tires for more than 100 miles.

The surviving 1966 426 Hemi Chargers are lauded in the enthusiast community, thanks in part to the bragging rights owners get from the NASCAR Grand National championship win.

The ’66 Hemi Charger you see here still has all of its original sheet metal – a rare claim to fame given the propensity owners had for getting the cars sideways, oftentimes into telephone poles. It’s fitted with the desirable 4-speed manual transmission, and has heavy duty brakes, the Hemi suspension package, the Track Pak, a 3.54:1 rear end ratio, the 8.75-inch rear axle, and the Sure Grip differential.

Inside there are premium bucket seats, a Transaudio AM radio, and the iconic dashboard with four equal sized silver rimmed gauges. The car comes with both a Chrysler Registry Report, and a Certicard to verify authenticity, and it comes with copies of previous titles and bills of sale.

If you’d like to read more about it or register to bid you can click here to visit the listing on Mecum Auctions. 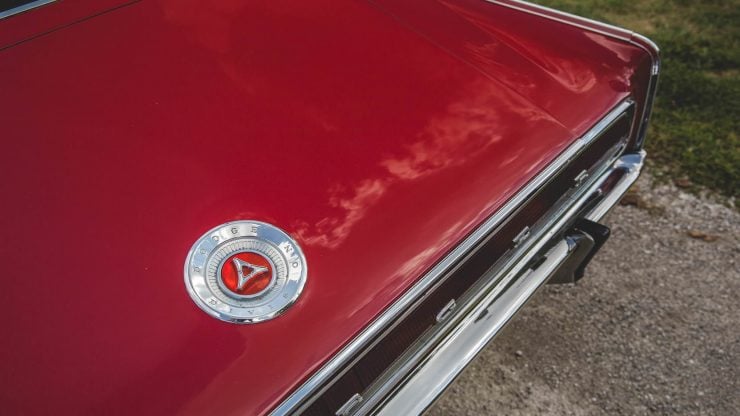 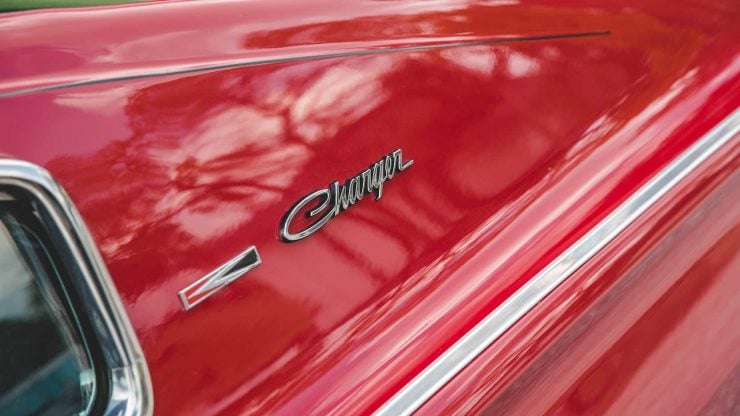 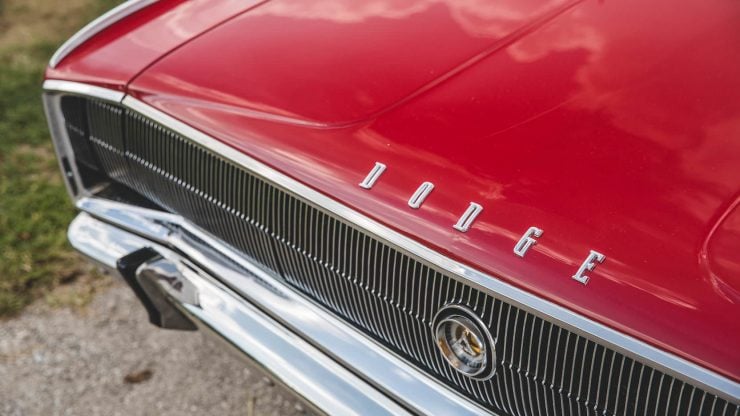 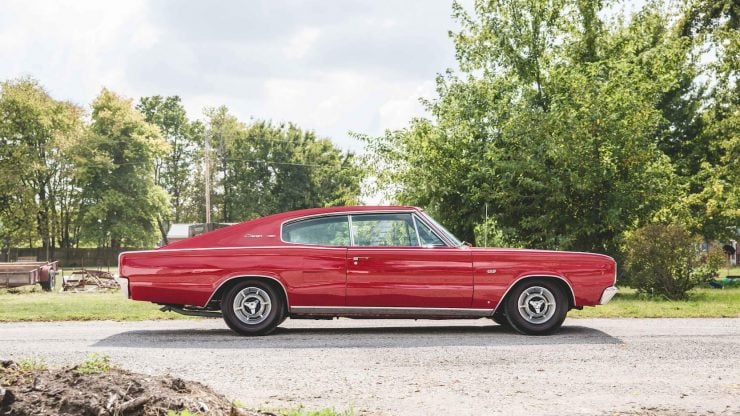 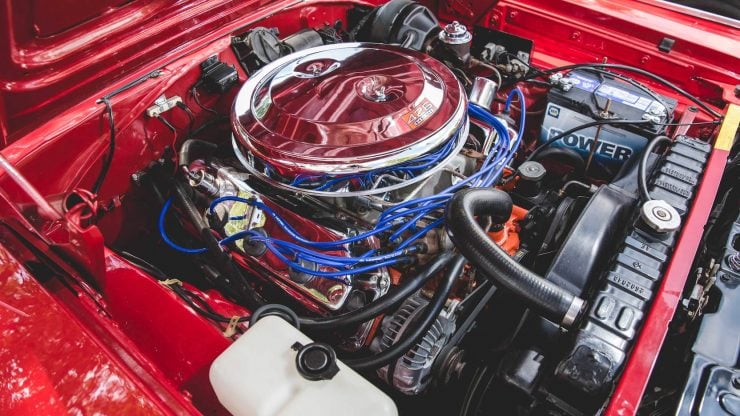 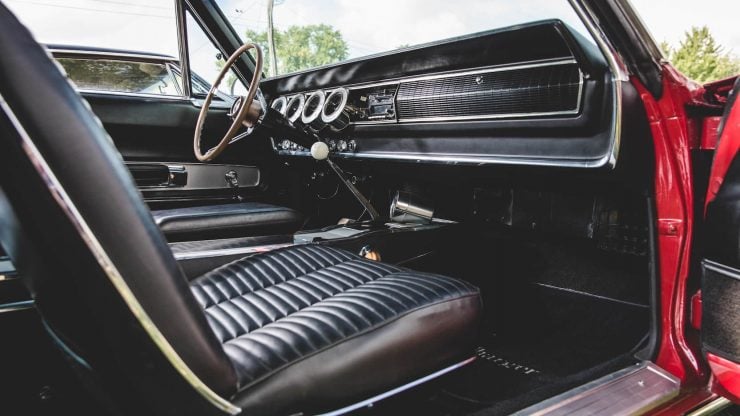 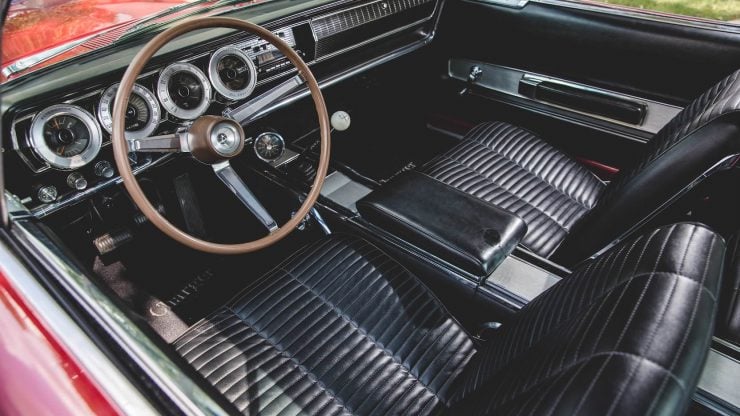 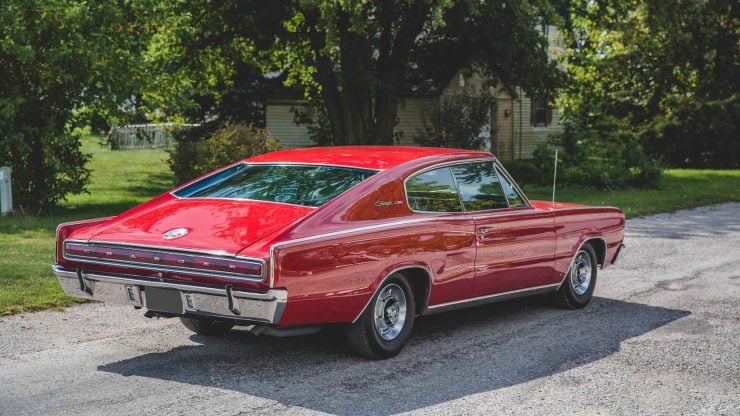 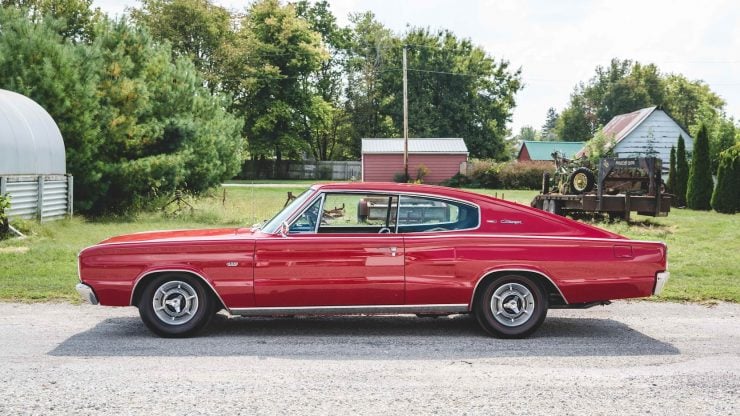 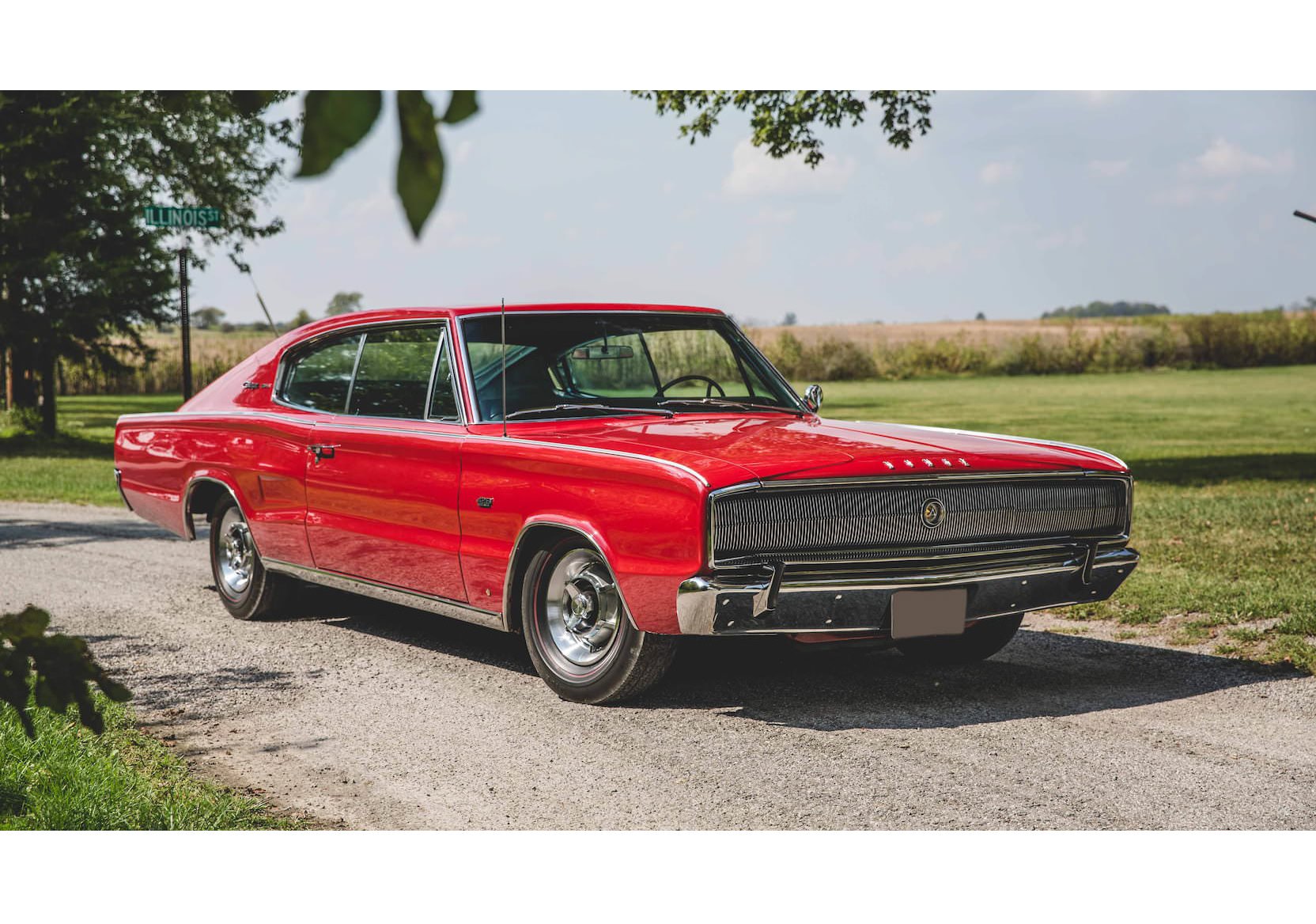