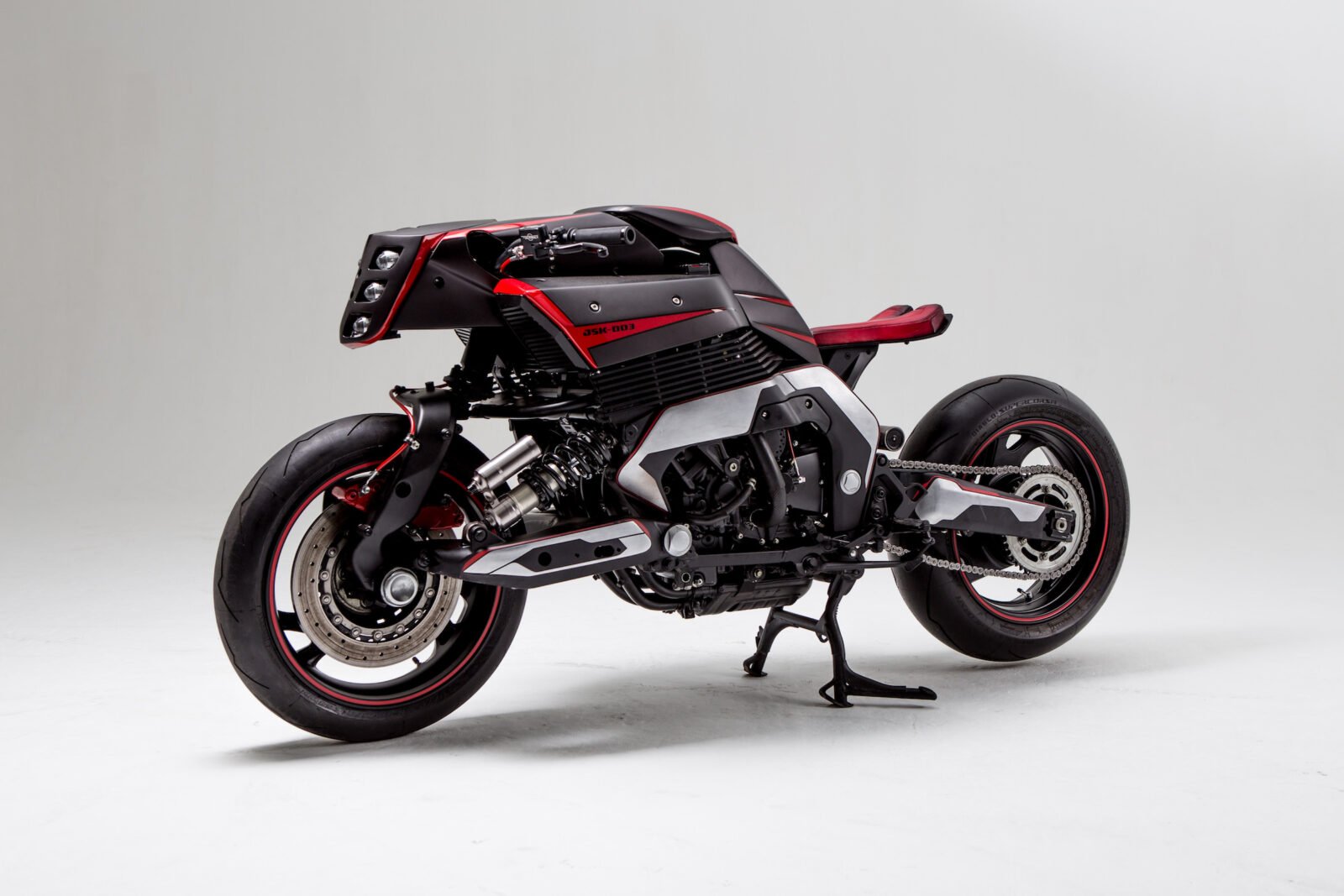 The Yamaha GTS 1000 was released in 1993 with unusual forkless front suspension designed by James Parker, a Stanford University trained Industrial Designer with an innate engineering ability – which he used to develop oftentimes unusual motorcycles.

In 1971 when he ran a Hodaka dealership Parker created a 120 pound riveted-aluminum monocoque-chassis Hodaka racer, in 1975 he developed a rising-rate single-shock rear suspension, and incorporated it into a trellis frame design for a Yamaha 500 cc four-stroke single. During this time he was racing RD350s at club level and riding for Motorcyclist Magazine’s endurance racing team. 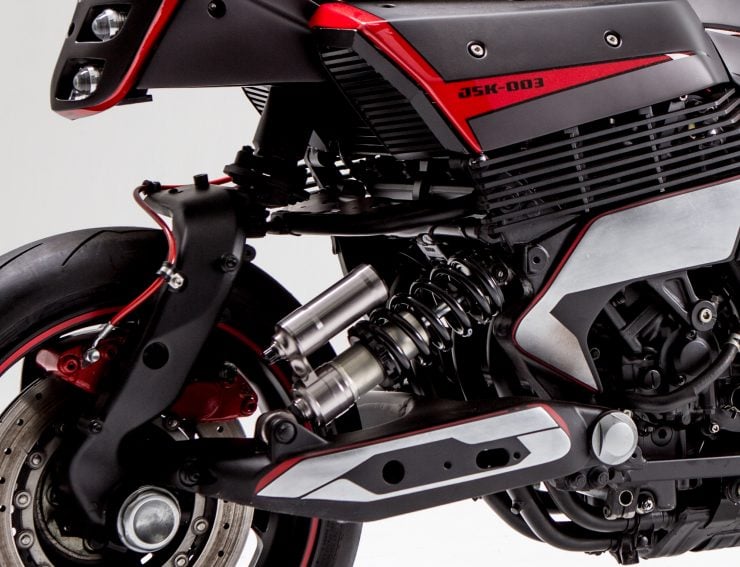 Parker’s system was state-of-the-art in the early 1990s, and it’s still notably more advanced that the front suspension systems used on many modern, high-end superbikes. With hub-centre steering systems the steering happens within the hub of the front wheel, not up at the steering head where the forks attach to the frame. We’ve become so accustomed to hydraulic motorcycle forks that hub-centre systems (HCS) tend to look almost alien – but they have a series of significant benefits over their simpler brethren.

HCS solves a number of the major problems with hydraulic motorcycle forks in one fell swoop. They separate the steering, braking, and suspension functions, which results in a significant reduction in dive under braking as braking forces are redirected horizontally along the arms into the frame, where they can help to counteract weight shift. Additional benefits include the fact that (in most HCS systems) the steering geometry remains the same over the full upward and downward movement of the suspension – instead of the wheel moving slightly closer to the frame on compression and further away on release as with traditional forks.

There are two primary achilles heels to HCS systems – steering feel is often reduced, and the systems are expensive to develop and manufacture – resulting in a much higher sticker price on the showroom floor. James Parker’s RADD Inc. HCS system was engineered to maintain solid road-feel, and with a few years of development would possibly have matched or exceeding the feel in even the best modern forks. 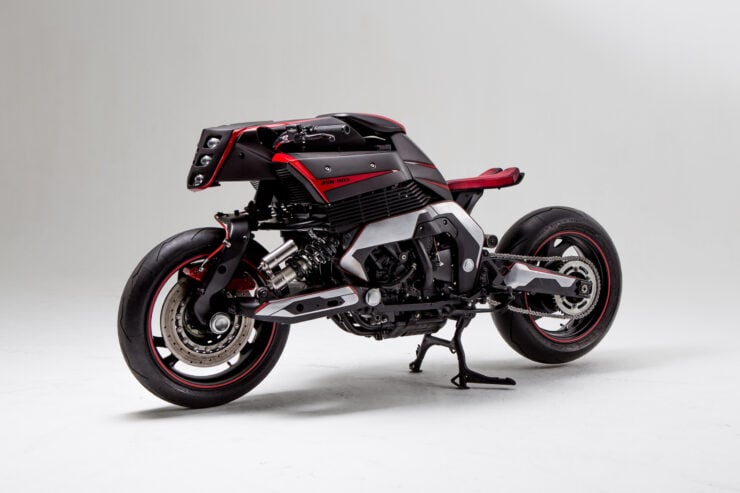 The motorcycle you see here is a labor of love from one of the custom motorcycle world’s most talented minds – Samuel Kao of the JSK Moto Co, based in La Puente, California. Samuel was approached by successful businessman and certified petrolhead James Chen in April 2015 with an idea – he wanted to take the motorcycle that sparked his imagination as a child and create a thoroughly modern version of it, as a way of showcasing what might have happened with the model’s progression if it had been kept in production longer than its 1993 – 1999 run.

This motorcycle was the Yamaha GTS 1000, one of the biggest what-ifs of its era, with many wondering what could have been if Yamaha (or other major motorcycle manufacturers) had further developed the concept rather than reverting to traditional hydraulic forks.

With this new custom build, named Project Rhodium Omega, James said “give this motorcycle a re-appearance in-line with the 21st century so a new generation of young people can open their imagination the same way it did when introduced on 1993”

The Yamaha GTS 1000 was originally designed as a touring motorcycle, it had an comfortable upright seating position, and it tipped the scales at 274 kilograms (604 lbs). Samuel and his team realized from the outset that they would have to both lower the weight and lower the handlebars if they were to achieve their goal of creating a sleek, modern version.

Once the basic sketches were down on paper, the body work was stripped from the donor bike, and a wireframe was painstakingly constructed to create a real-life 3D model of what the finished bike’s dimensions would be. Final body design was shaped in clay on the original chassis, the vents were all designed to be fully functional, and they were each mocked up in card paper before having vector files created so they could be individually laser cut. 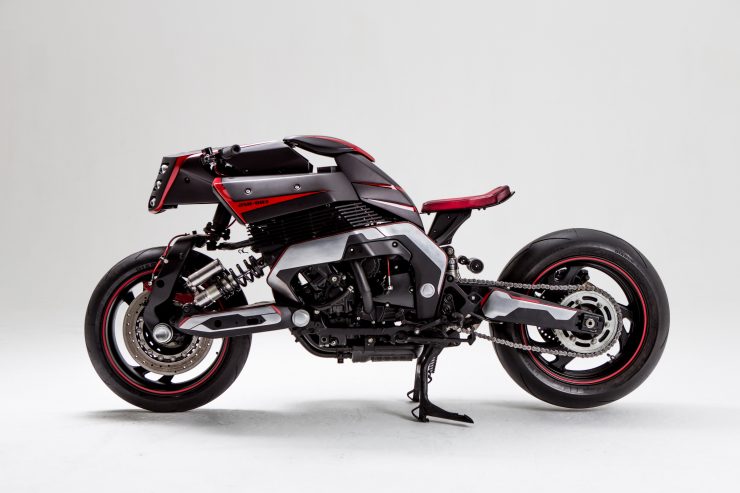 The new design required a custom fuel tank and radiator, it was also decided to remove the original ABS assembly to save weight, and the original lead acid battery was swapped out for a much smaller lithium-ion unit for the same reason.

Once of the most challenging aspects of the design was the headlight assembly, countless designs were penned and discarded before the final 6-light was settled on. The headlight hides an air intake for the engine too – the 1000cc 4-cylinder needs to be fed as much air as possible.

The minimalist seat design was designed in-house and then milled by the Black Smith CNC Co, with upholstery by Kingsman Seat’s Sara Dai. One of the most significant difficulties with a custom like this is always going to be the suspension – the team at Gears Racing stepped up and created new front and rear shock absorbers specifically for this bike to match, weight, performance, and rider weight giving optimal handling while remaining fully adjustable.

The complete bike is a testament to what can be done with overlooked, unusual bikes from recent history. I dare say this will be the most extreme looking custom we feature this year – but its Gundam-inspired looks are only a small part of the story – the engineering that went into the original Yamaha GTS1000 and into this modern version are fascinating, and I doubt there’s a gas station from Los Angeles to Laos that wouldn’t see a crowd gather when this thing pulls up for fuel. 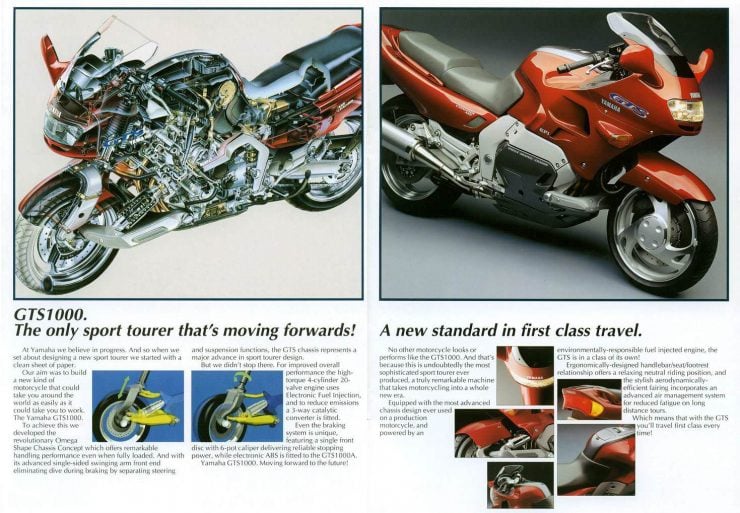 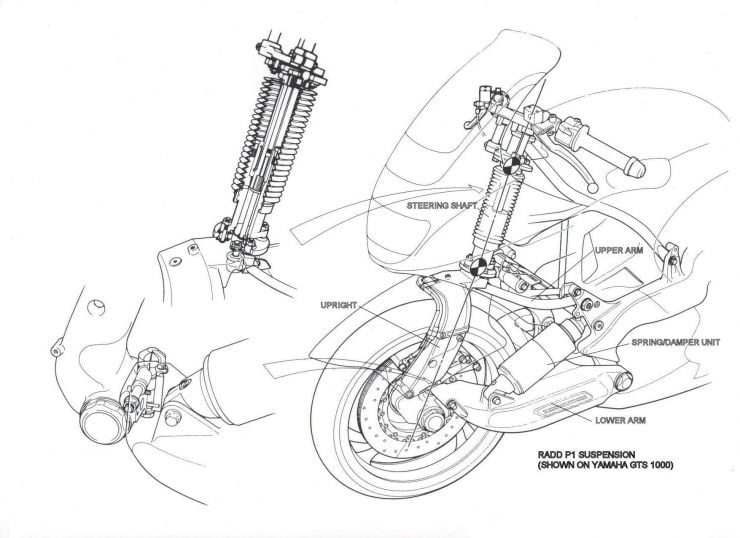 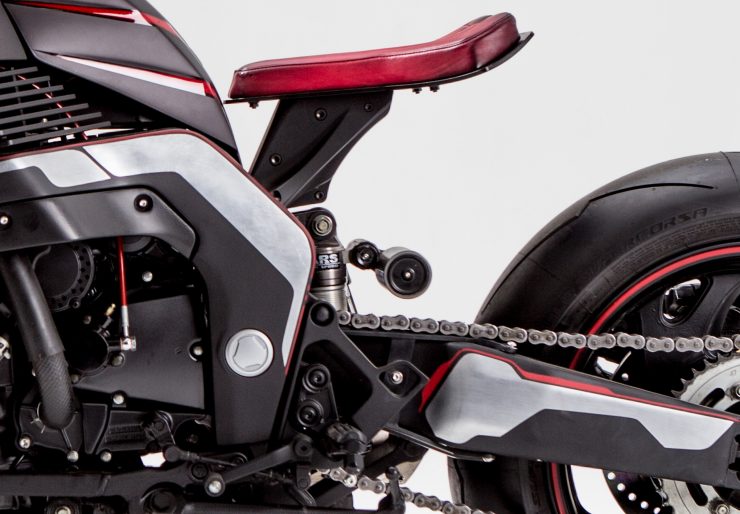 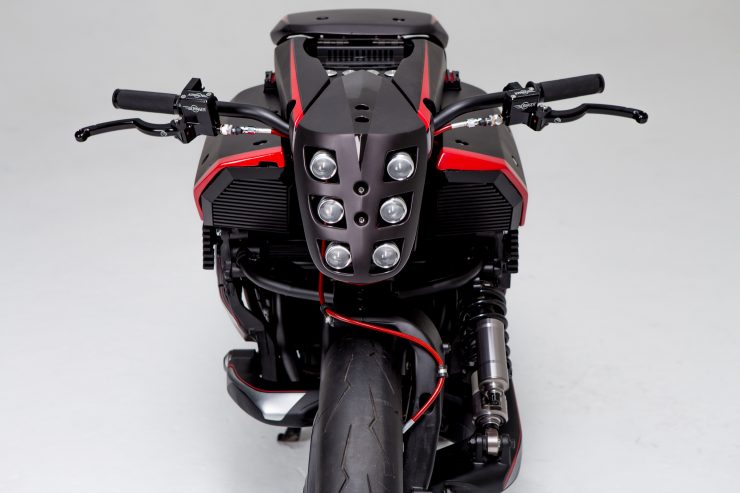 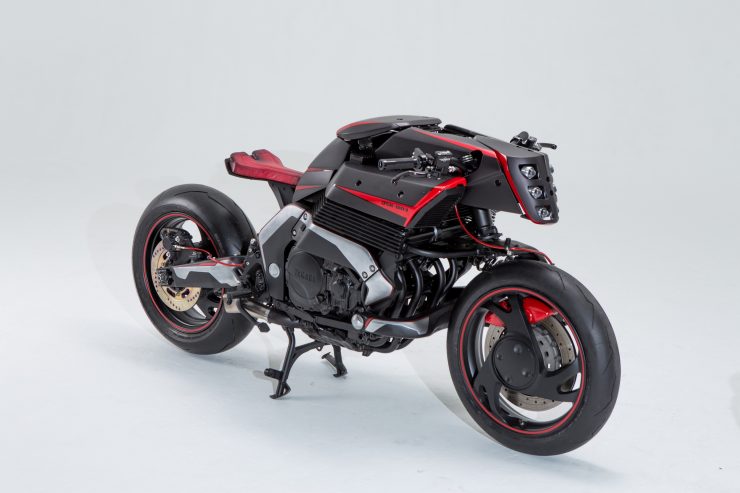 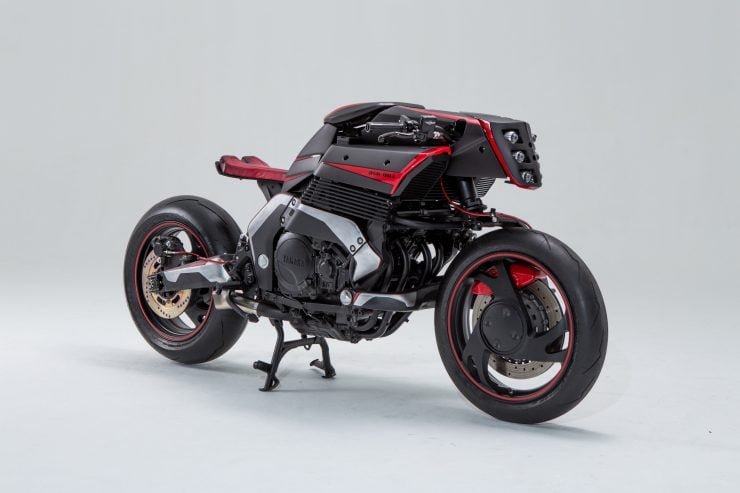 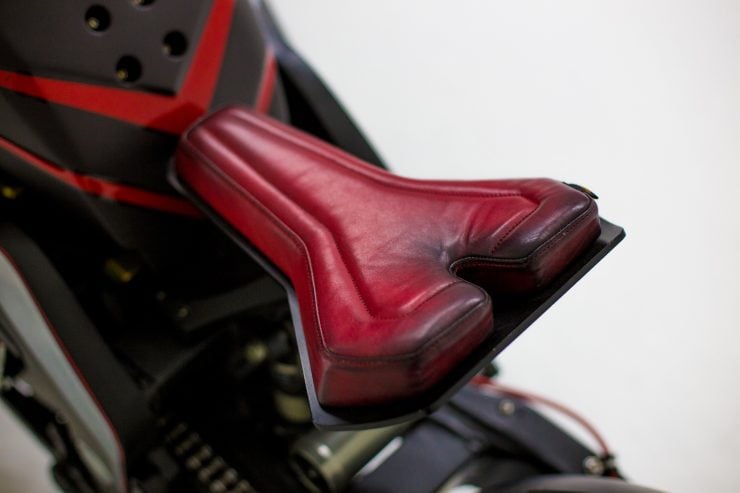 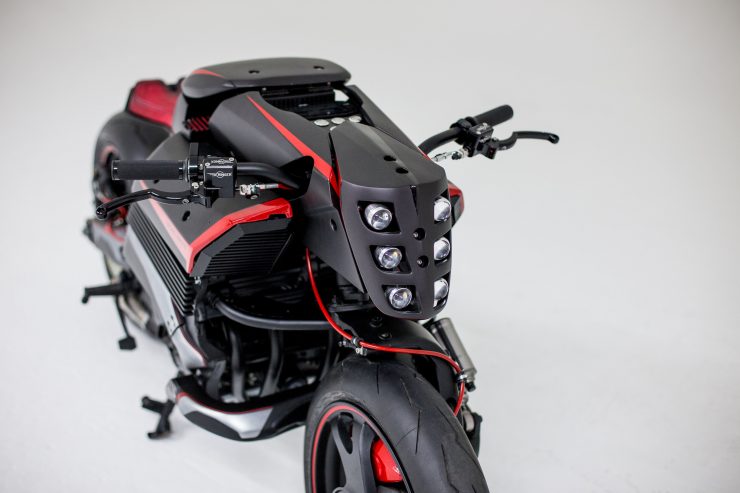 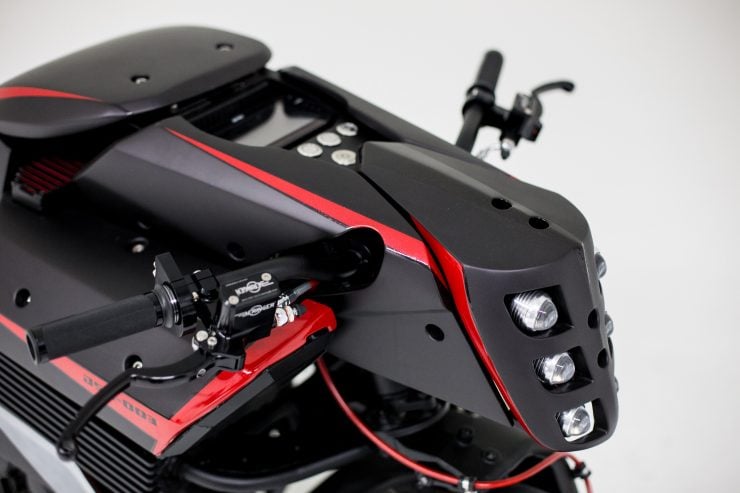 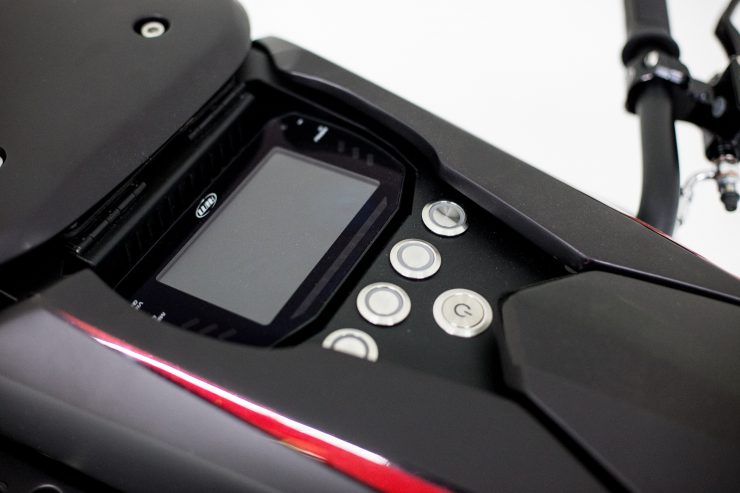 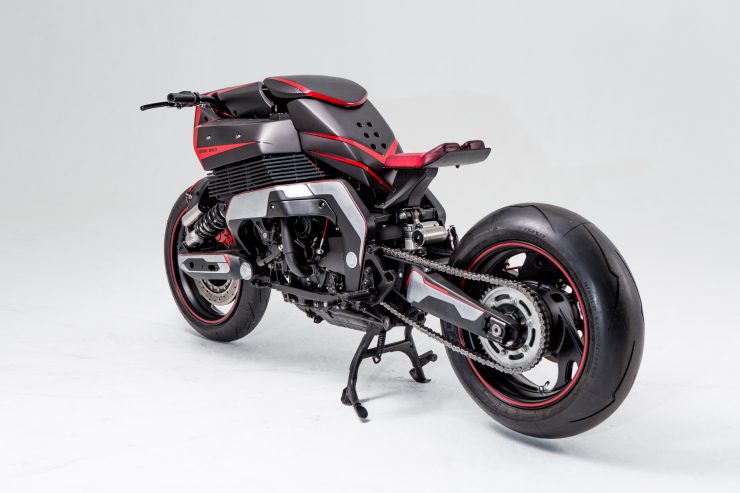 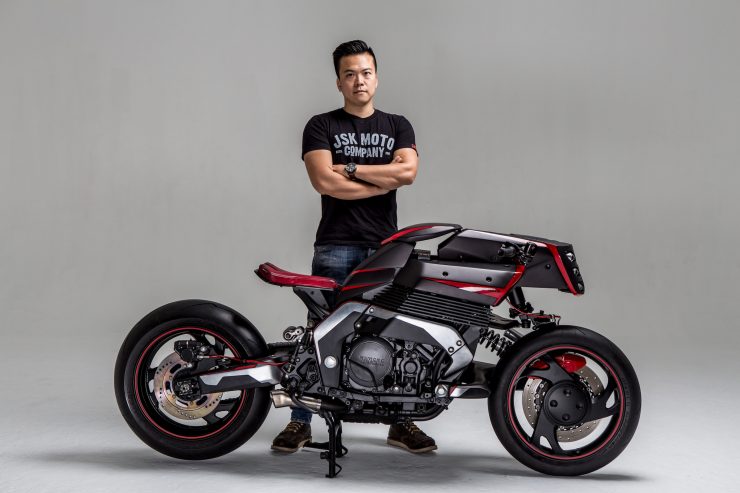 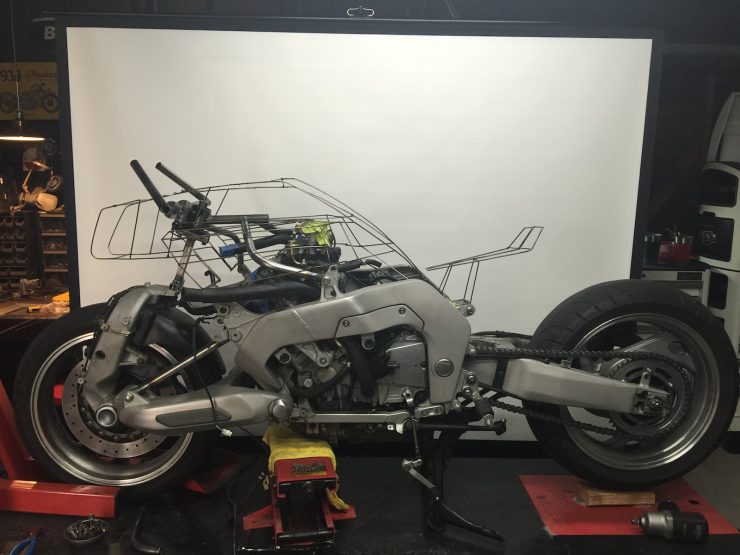 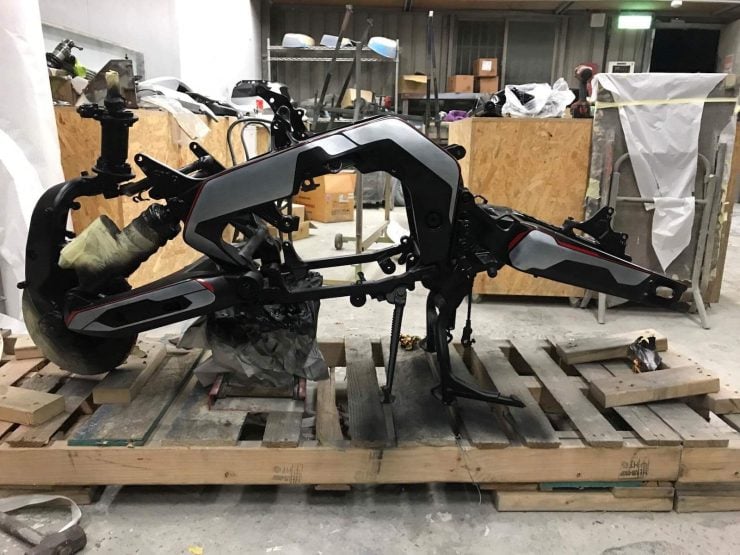 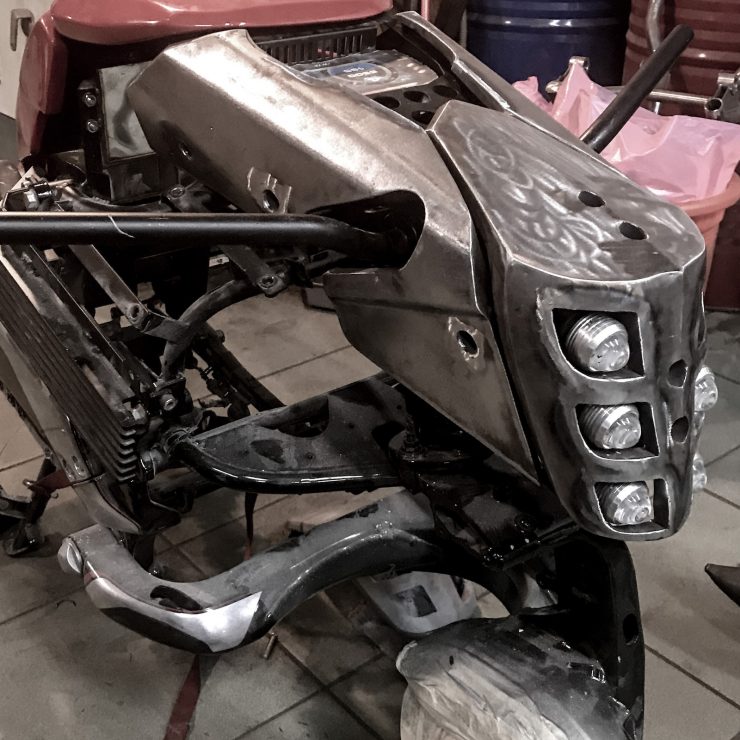 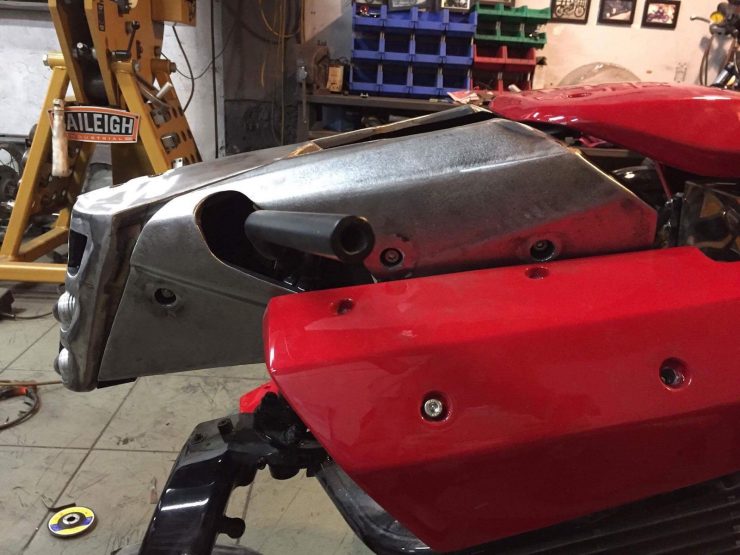 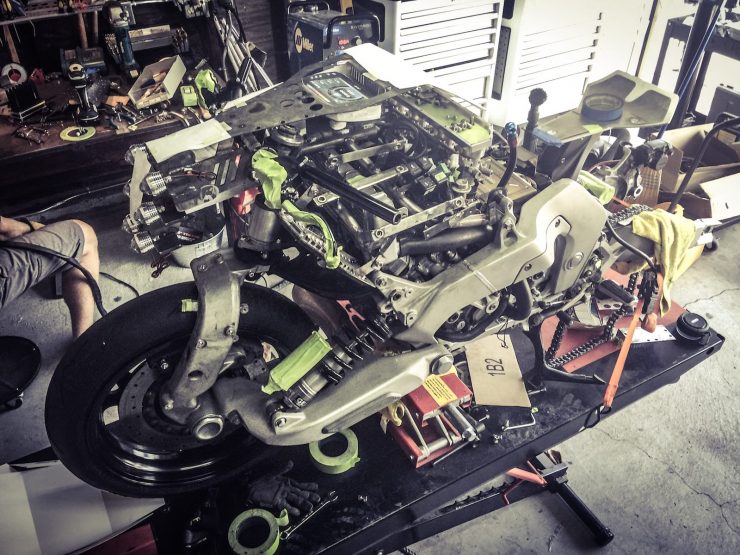 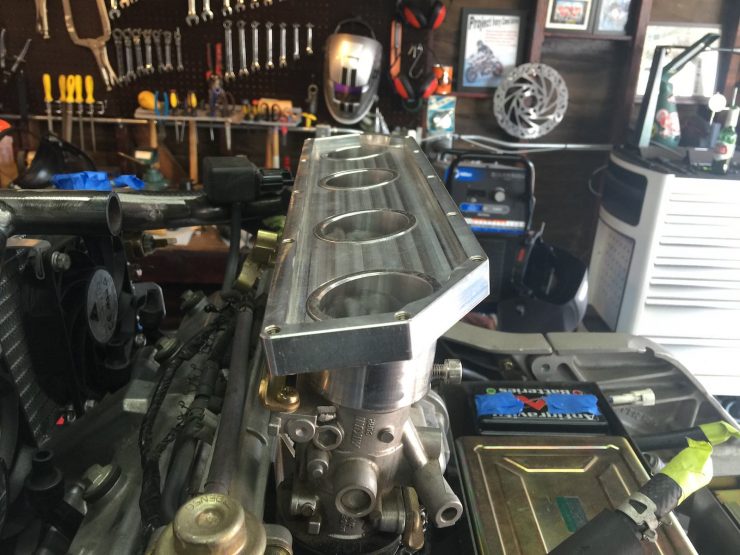 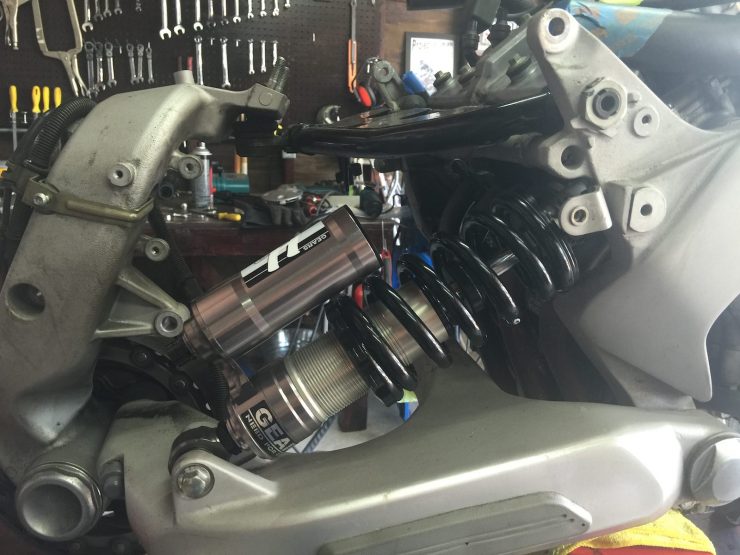 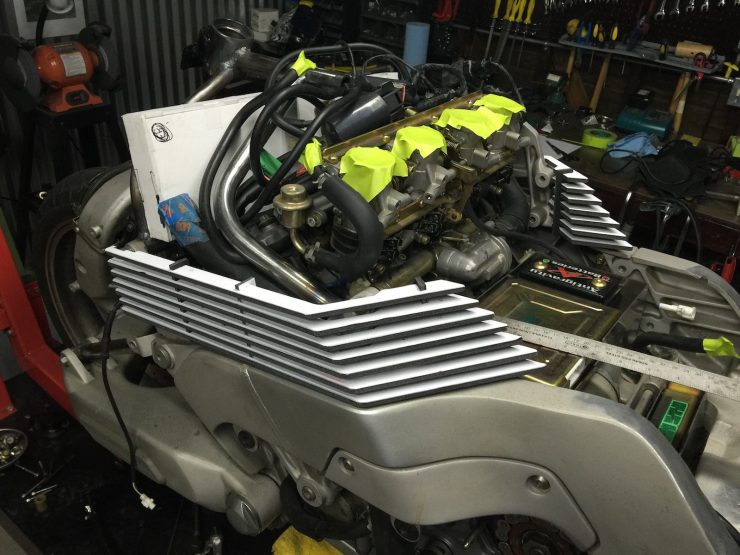 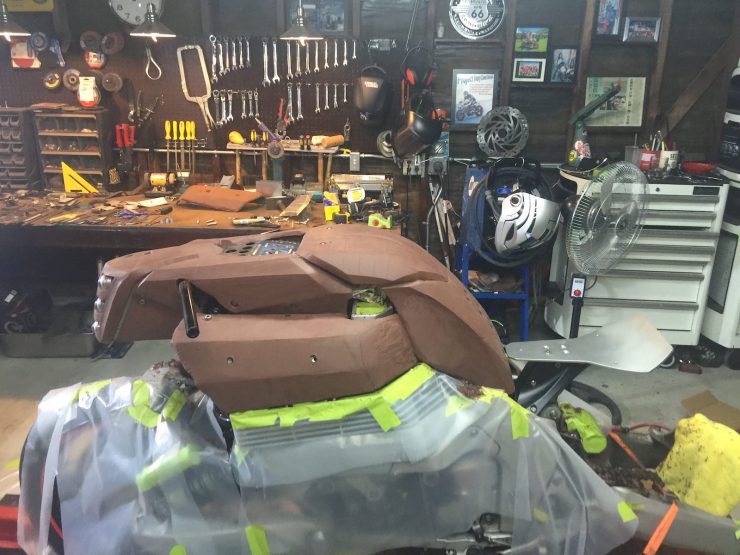 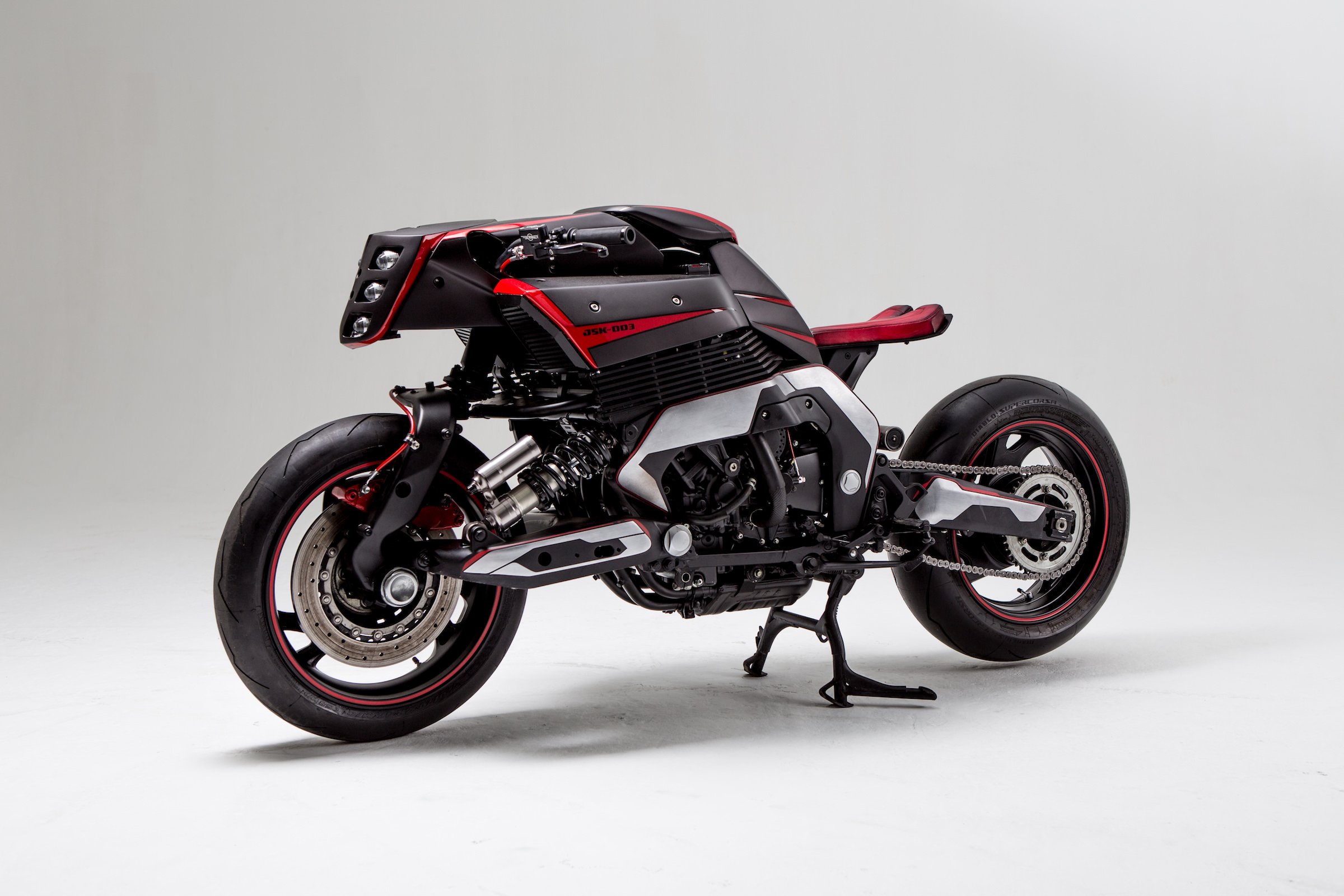 Rare surviving Crocker V-twins are now the most valuable American motorcycles ever made, they sit…

Editor’s Note: We don’t typically feature choppers on Silodrome as it’s not really our wheelhouse,…

This is the new Trevor DTRe Stella, an electric dirt tracker from Belgium that produces 260…

This is an original set of Vincent Black Knight bodywork from 1955, it was originally fitted…