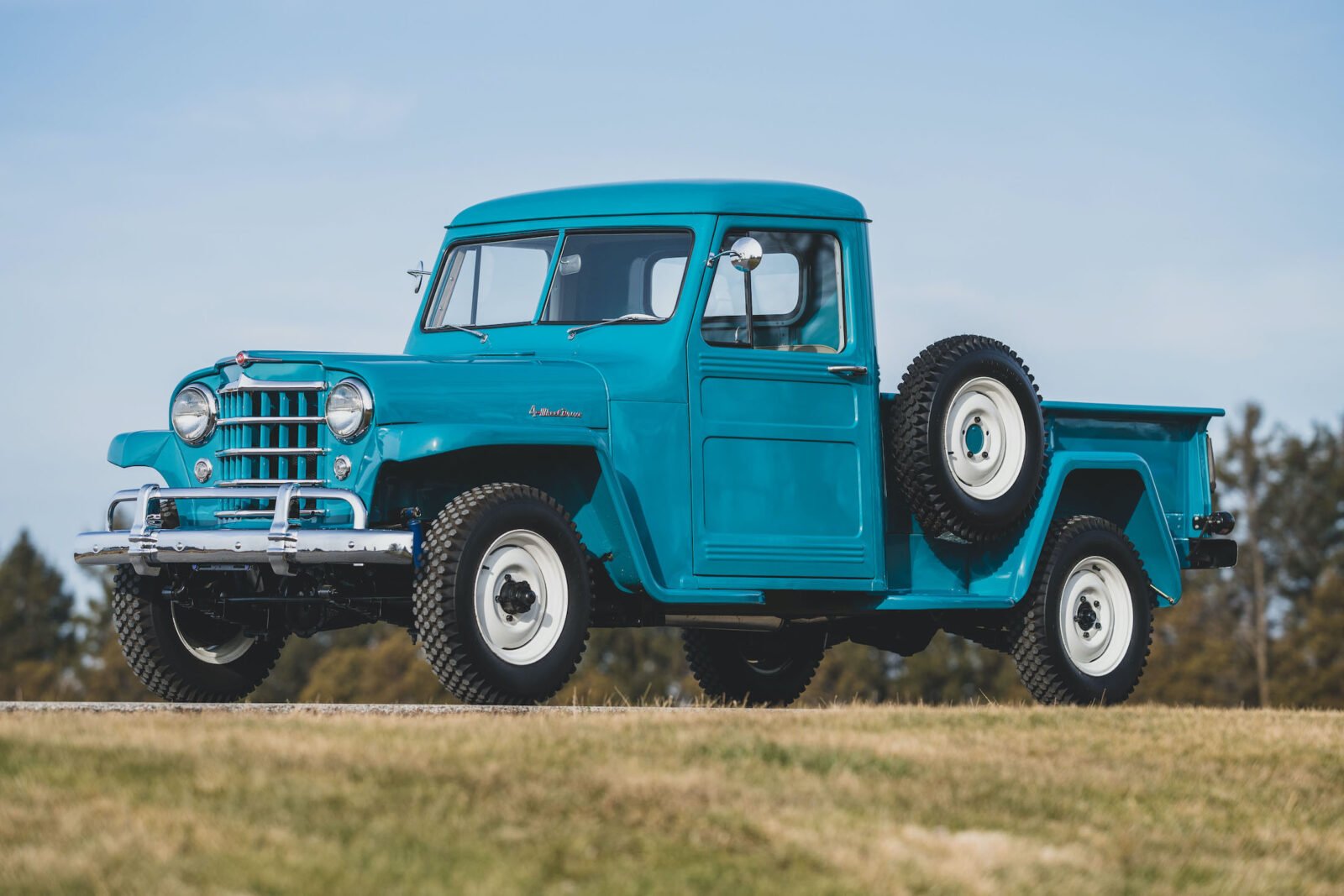 In the years immediately after WW2 the Willys Jeep had become arguably the most famous vehicle in America. Anyone could recognize one on sight and many young American men had driven them or ridden in them during their military service.

Willys capitalized on this popularity in the same year the war ended by releasing the Willys-Overland CJ-2A (or Universal Jeep) in 1945. The name “CJ” stands for “Civilian Jeep” and in this case it was little more than a lightly civilianized version of the somewhat spartan military Jeep that had performed so well in the conflict.

It was clear that there was a lot more potential for the Jeep, and so a pickup truck version was developed alongside the Willys Wagon, featuring an enclosed cab and it could be ordered as a pickup truck, a platform stake truck, a chassis cab, or a bare chassis.

Although these trucks were slightly better equipped than the original Jeep they were still designed as working vehicles – they could carry up to 1 ton and they were initially powered by the same 2.2 litre Go-Devil inline-four engine as the military Jeep. 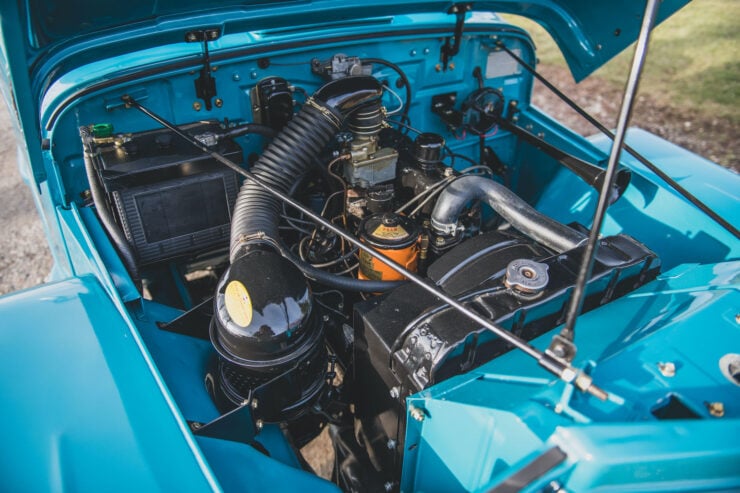 Above Image: This Willys Pickup is fitted with the more powerful Hurricane F-head engine producing 72 hp and 114 lb ft of torque.

Sales of all Jeeps were strong in the 1940s and 1950s, as a result the pace of innovation was fast. Willys were releasing new versions of the CJ series Jeeps every few years and the pickup trucks were getting updated too. By 1950 the Willys F4-134 Hurricane engine had become available as an option and in 1953 it became the standard engine.

The Hurricane was much the same as the outgoing Go Devil engine but it was fitted with a new head, whereas the Go Devil had a side valve head the new Hurricane engine had an F-head design, this allowed the use of larger valves and a smaller combustion chamber – the compression ratio increased from 6.5:1 to 7.5:1 and thanks to this, plus the head’s better flow characteristics, engine power increased from 63 hp to 72 hp.

Willys Overland would keep their first generation pickup truck in production from 1947 until 1965, it would prove to be one of the most influential vehicles of the era establishing pickups as one of America’s favorite vehicles and resulting in an arms race to build bigger and better civilian trucks by the major automakers.

This arms race that carries on today close to a century later with futuristic vehicles like the Tesla Cybertruck, the Rivian R1T, the Hummer EV, and the Bollinger Motors B2.

Today the surviving examples of the early Willys Pickup Trucks are in high demand with collectors, particularly the four-wheel drive variants. Sadly due to much less advanced rust protection many of them simply rusted away or were scrapped, so examples like the truck you see here have been much sought after. 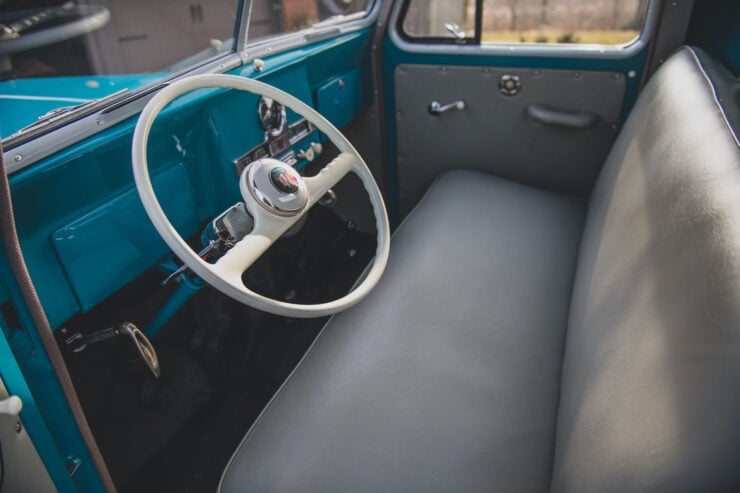 Above Image: The interior is quite luxurious when compared to the CJ series Willys, this Pickup has a sprung bench seat, upholstered door cards, winding windows, and a heater.

This truck is a 1951 model fitted with the desirable 72 hp Hurricane F-head engine producing 114 lb ft of torque. Power is sent to all four wheels via 3-speed Borg-Warner T-90 manual transmission and it has both high and low range available.

Inside the cab you’ll find a sprung bench seat with upholstered door cards and wind down windows, relatively luxurious items for a Willys of this era – it even has a heater.

The reason the truck looks so immaculate is because it’s fresh off a complete mechanical and cosmetic restoration which was completed in early 2018, and it had been given an earlier engine rebuild and balancing completed 2013. The vehicle now has a new wiring harness, upholstery, and window glass, and it features new-old stock front and rear bumpers.

If you’d like to read more about this truck or register to bid you can click here to visit the listing on RM Sotheby’s. It’s due to cross the auction block in late February and it’s located in Chatham, Ontario. 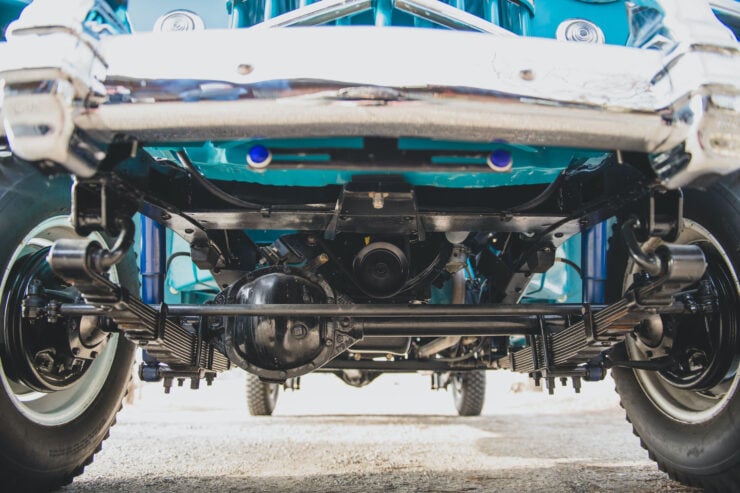 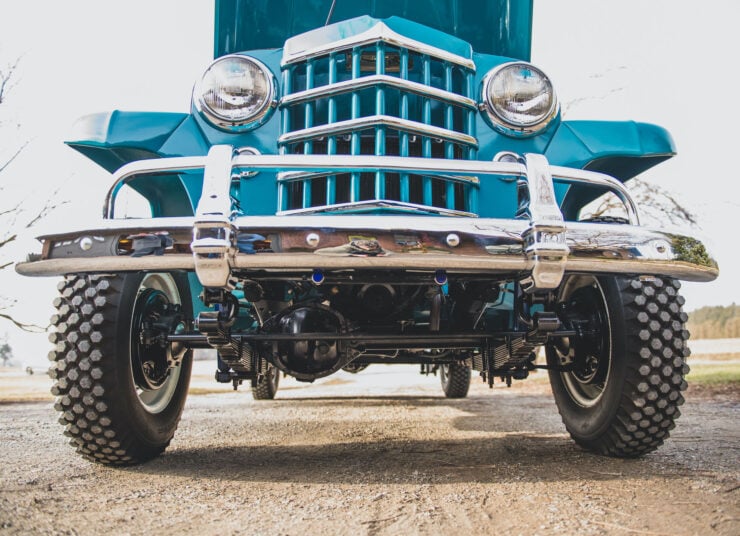 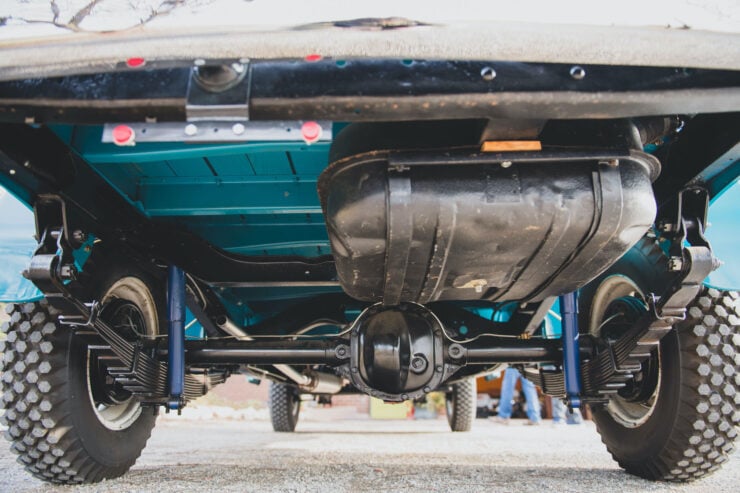 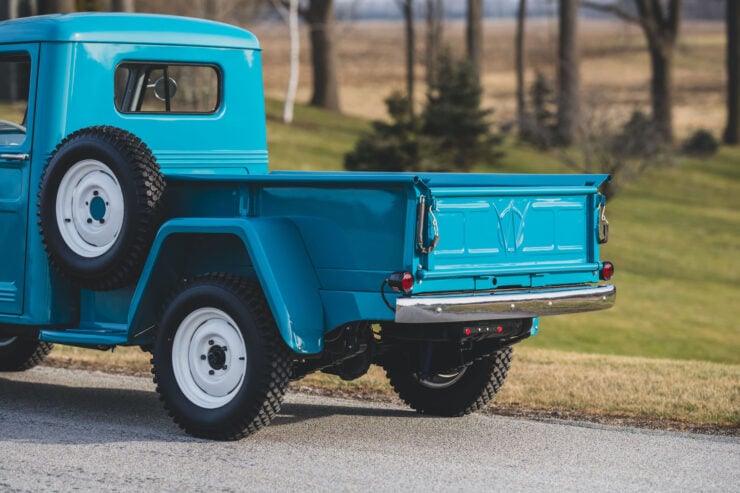 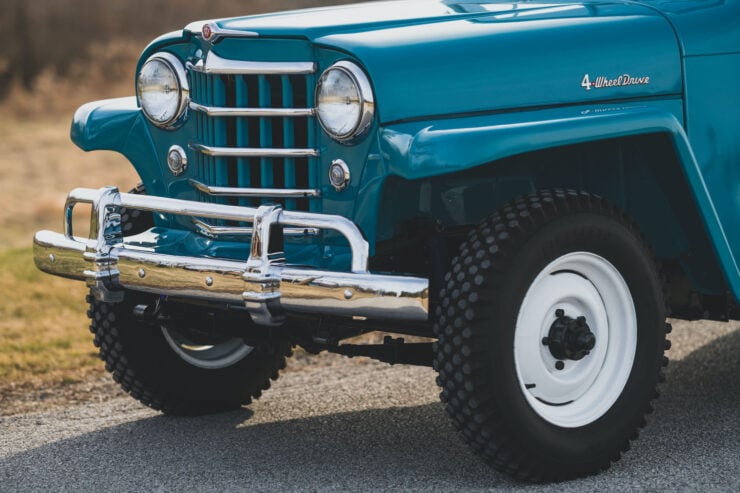 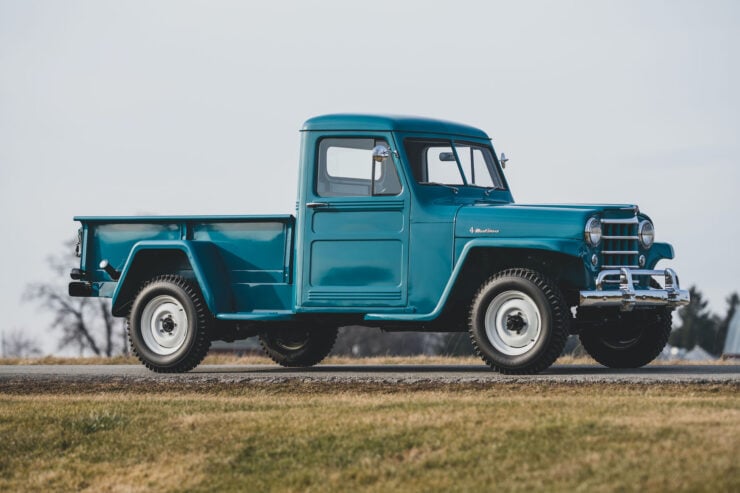 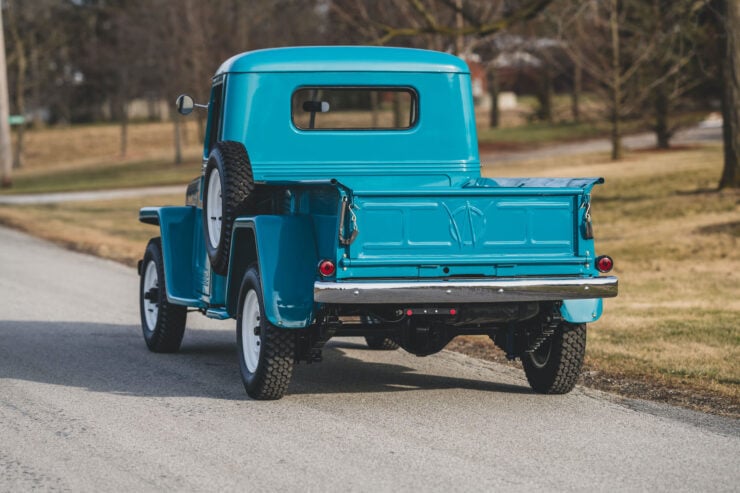 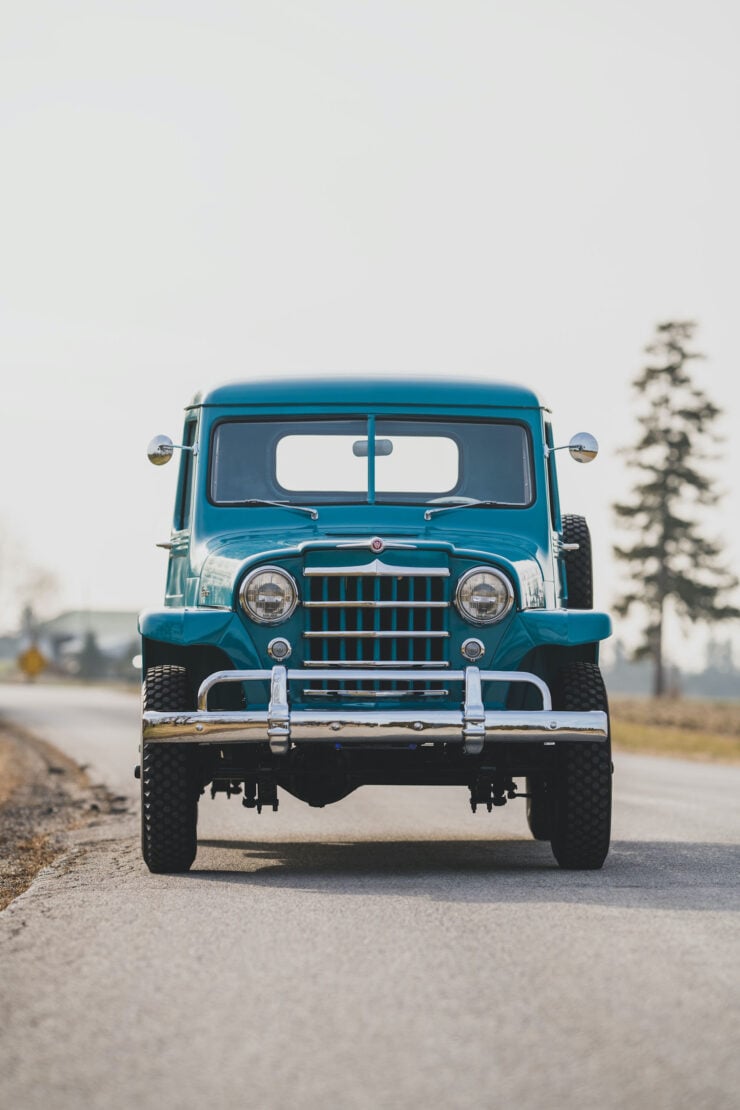 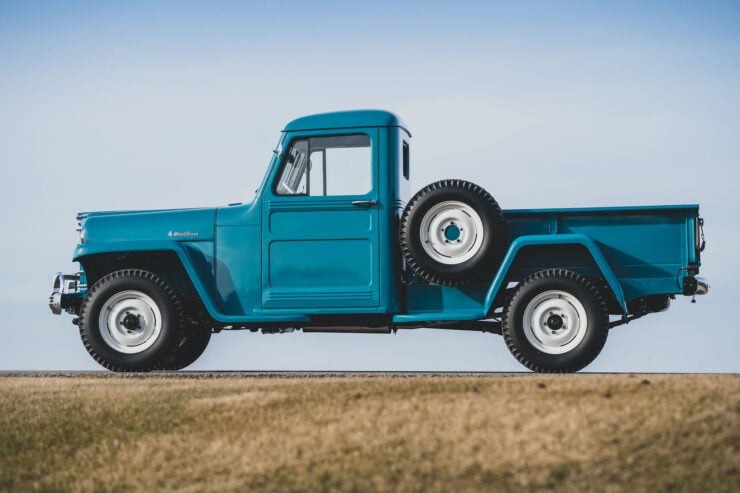 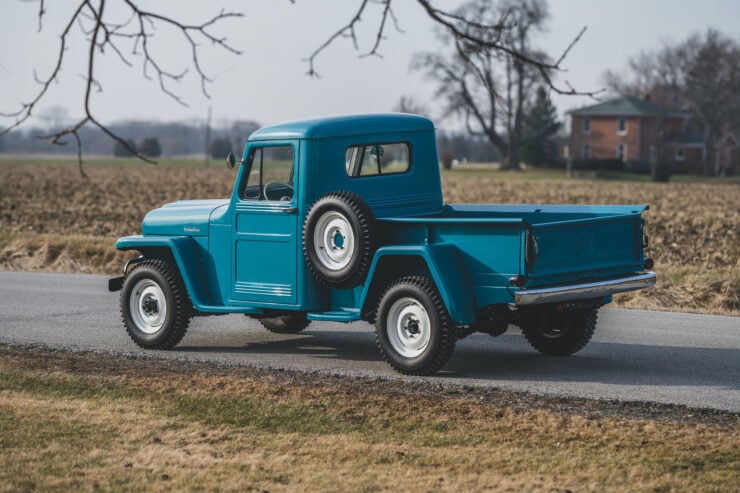