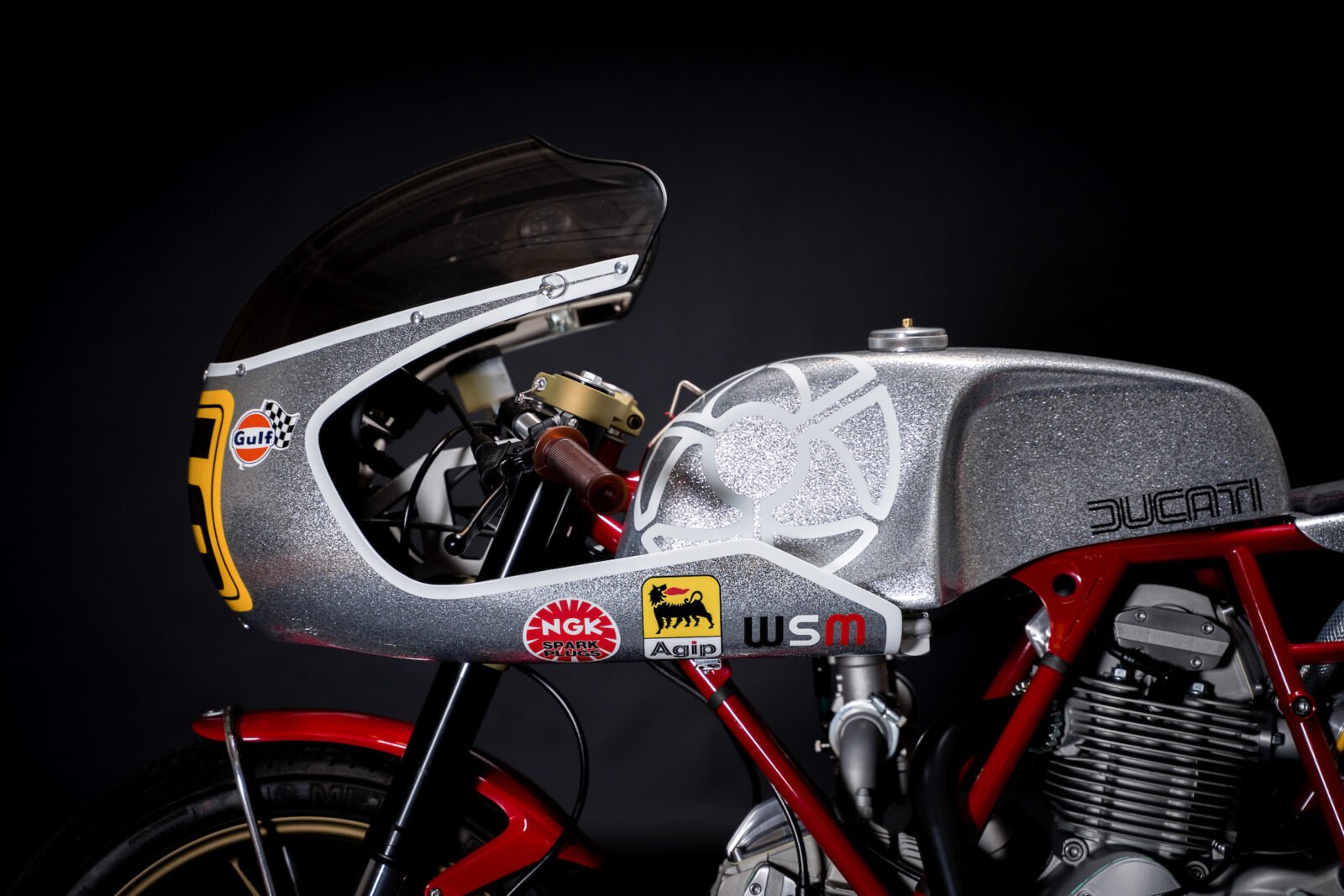 Walt Siegl is a globally renowned custom motorcycle builder who has a unique knack for creating motorcycles that are both masterpieces of engineering, and aesthetically stunning.

From his base in New Hampshire Walt has built some of the most memorable Ducati customs in modern history. Rather than building the far more common “bolt on specials” using parts sourced from eBay, Walt and his team painstakingly design and built new lightweight frames, swing arms, and carbon fibre fuel tanks, fairings, and body parts.

Many Walt Siegl customs are raced competitively with significant success, and Walt himself is an avid racer who regularly trounces other riders who are decades his junior. 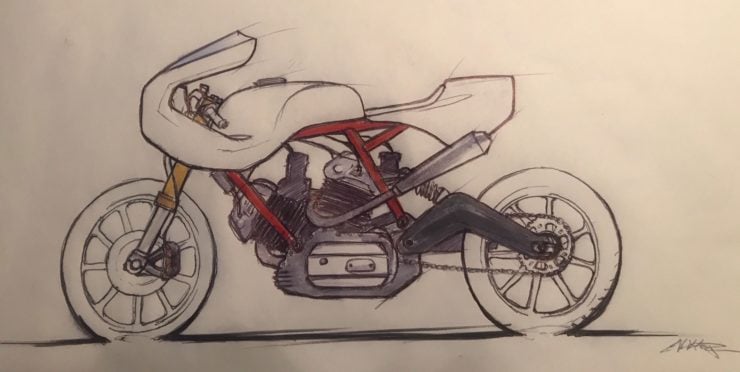 Image: This sketch shows the bright red frame for the first time, one of the most eye-catching elements of the completed bike.

The project to build this bike, a square-case bevel Ducati, was commissioned by Bobby Haas, founder of the famous Haas Moto Museum in Dallas, Texas.

The two men know their way around motorcycles and they worked closely together on the design through countless sketches until the frame, bodywork, geometry, and lines all worked perfectly – then the build began.

The square-case Ducati L-twin has always been a contentious design with the Ducatisti, many don’t like it and much prefer the earlier, more curvaceous version of the engine – specifically the side covers.

That said, the square-case engine’s prominent side covers were penned by none other than Giorgetto Giugiaro – the man judged to be the Car Designer of the Century in 1999 by a jury of 132 automotive journalists from 33 different countries. 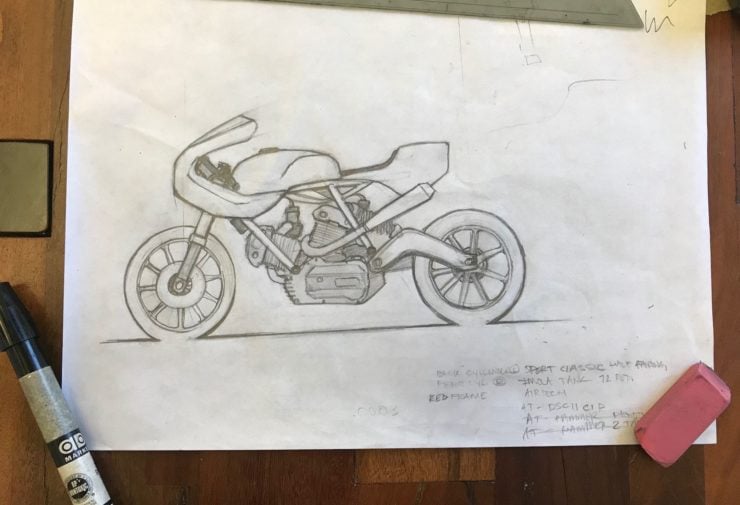 Image: An early sketch showing a Ducati Scrambler swing arm, not used in the final bike.

Personally I’ve always loved the design of the square-case and not really understood the bitterness towards it.

The design captures the zeitgeist of its era, the sharp edges reflecting the revolution happening in the automotive design world with the release of cars like the Lamborghini Countach, the MK1 Volkswagen Golf, the Lotus Esprit, the Lancia Stratos, the BMW M1, and countless others.

It was a time when vehicle design was moving from more rounded lines to sharper, more angled lines, and the Ducati engine captured it perfectly. 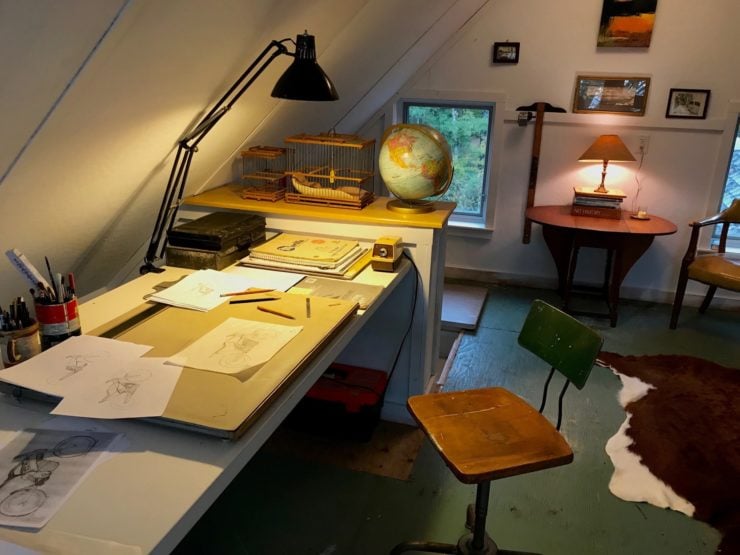 Image: Walt Siegl’s study, where all of his motorcycle designs start life as hand-drawn sketches.

The plan with this custom build, called “Bedeveled”, was to take an original ’80s-era version of the square-case bevel Ducati engine and build a genuinely capable race bike around it, including a new frame, all new body work, new suspension, brakes, a new swing arm, and a new wiring harness.

The engine was rebuilt by the talented Bruce Meyers, Walt’s engine man and a veteran of many WSM builds. Meyers fully rebuilt the 864cc 1980 SuperSport engine and gave it ported and flowed cylinder heads, oversized valves, racing cams, a balanced and blueprinted bottom end, and an electronic ignition.

Walt upgraded the carburettors to twin 40mm Dell’Ortos and built a free-flowing stainless steel exhaust, all finished with a black Jet Hot coating. The engine now produces a reliable 85 and 90 hp and gobs of torque. 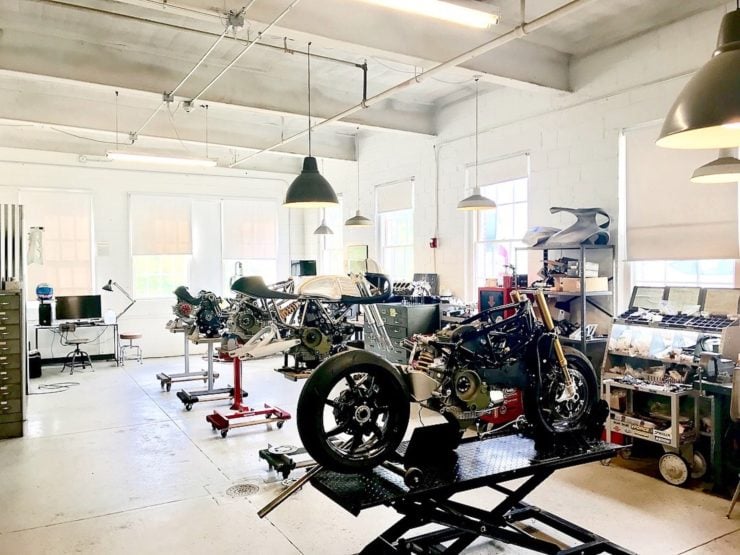 Image: The hydraulic lifts all full at the WSM workshop.

Walt and his lead technician Aran developed and built a new lightweight chrome-moly trellis frame tailored to the engine, using it as a stressed member.

For the uninitiated, chrome-moly is chromium-molybdenum alloy. It’s known for its excellent strength to weight ratio and it’s considerably stronger and harder than standard steel.

The eye-catching bodywork was sketched multiple times before Walt was happy with it, once the design was settled on the moulds were created and the sections were laid up in carbon fibre.

The beautiful metallic paint was all done by Peach Pit Racing, it’s a direct hat-tip to the paintwork used on the Imola racer ridden by Paul Smart to one of Ducati’s greatest ever victories. 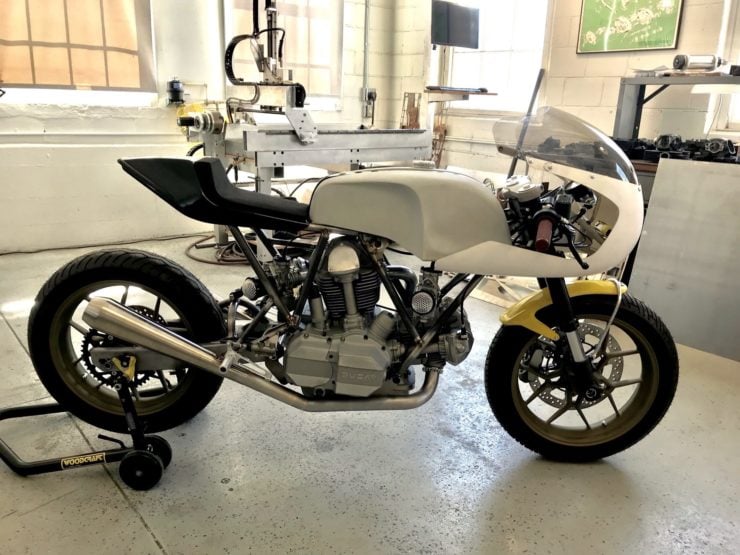 Image: This was an initial assembly of all major parts to ensure everything fit, it was then disassembled for painting and finishing.

A matching pair of lightweight MV Agusta Brutale aluminum wheels were chosen for the build as the complement the lines perfectly.

Front and rear suspension started life on a Ducati Scrambler but it was carefully rebuilt for this application, an entirely new swingarm was fabricated. The swingarm is slightly shorter than the original and the steering neck angle is now a slightly steeper 24º – both contribute to sharper, quicker handling.

Braking is achieved with an oversized single disc up front with a late model Brembo caliper, and a smaller disc on the rear.

The completed bike is a testament to Walt’s signature style, it’s much faster than the original, it’s also lighter, better handling, better looking and better at stopping too. This motorcycle is now pride of the collection at the Haas Moto Museum, where it’s rubbing shoulders with some of the finest production motorcycles ever made.

Last we heard, Walt was tucked away in his study sketching away at his next two wheeled creation.

Visit Walt Siegl’s website here to see more of his creations, or to order your own. 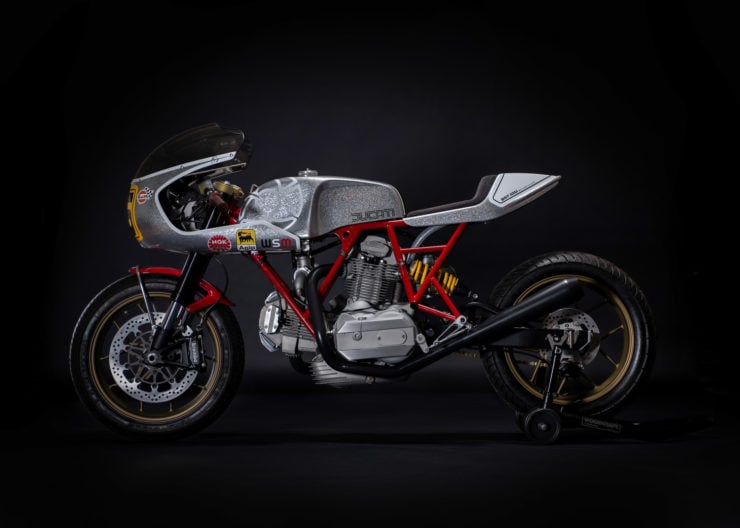 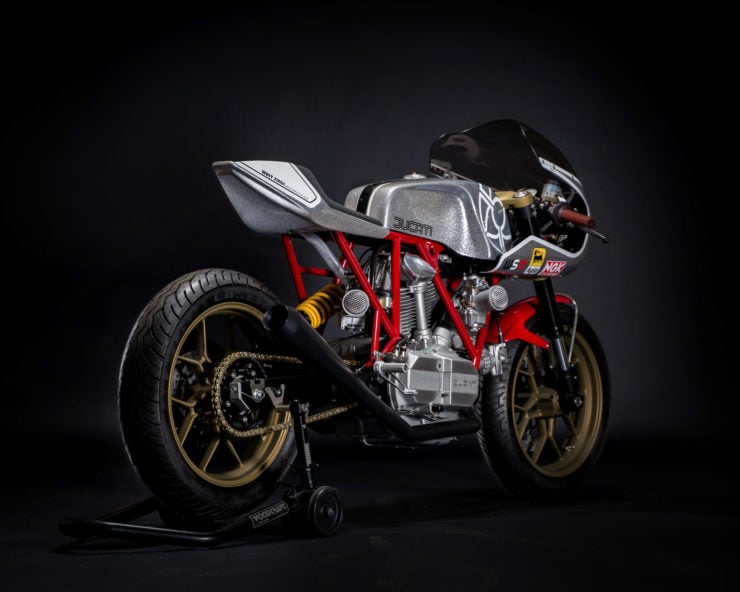 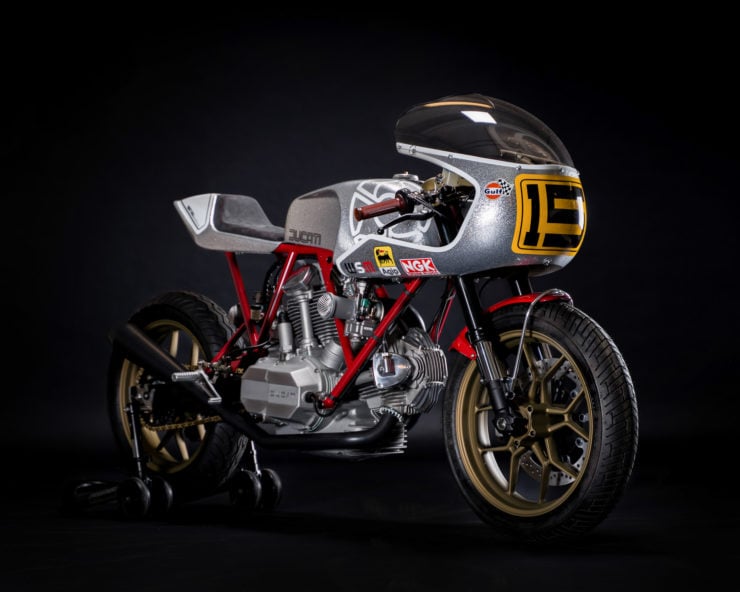 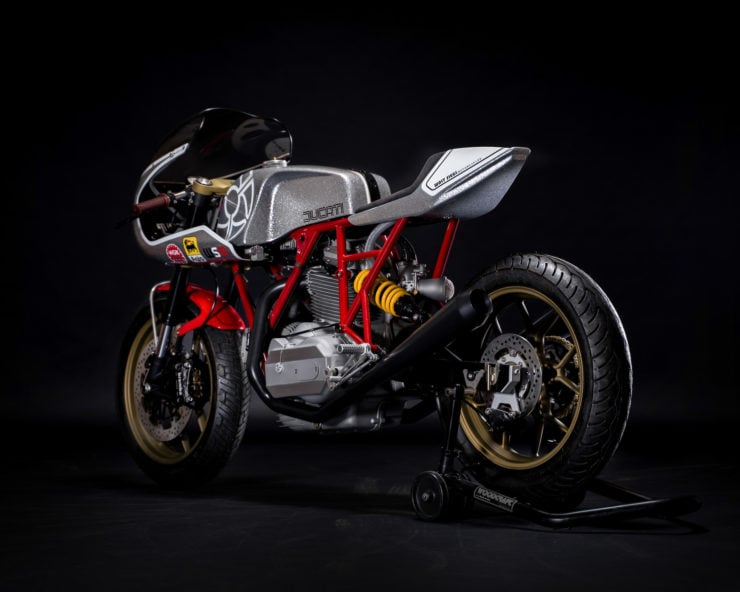 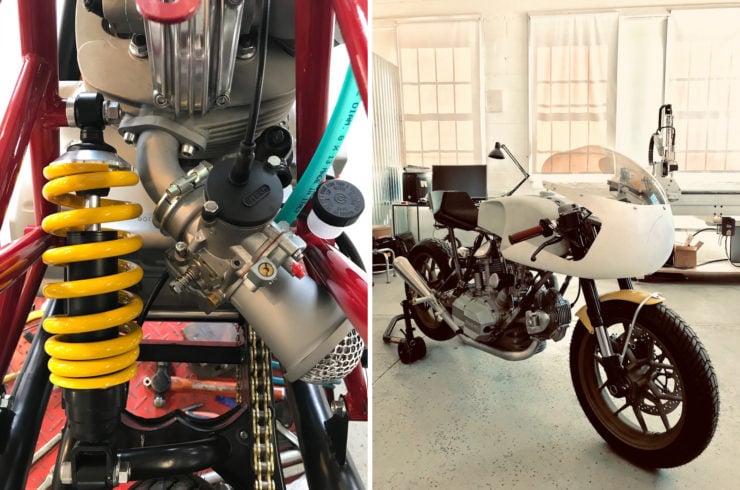 Image: A look at the precise clearances involved (left), and the fairing (right).

Image: The carbon fibre fairing after the primer coat (left) and after full paint and decals have been applied (right).

Image: This is the bespoke bracing for the front fairing, it includes a lithium-ion battery brace and the tachometer. 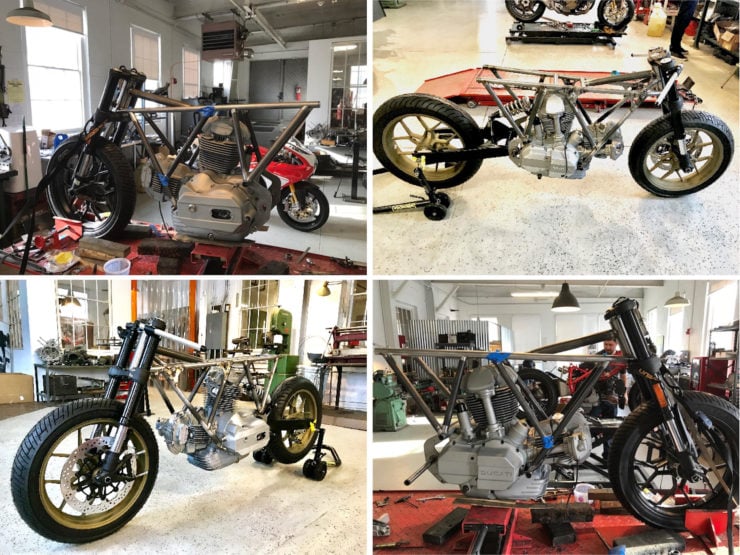 Image: Checking the frame geometry with the engine and suspension fitted. 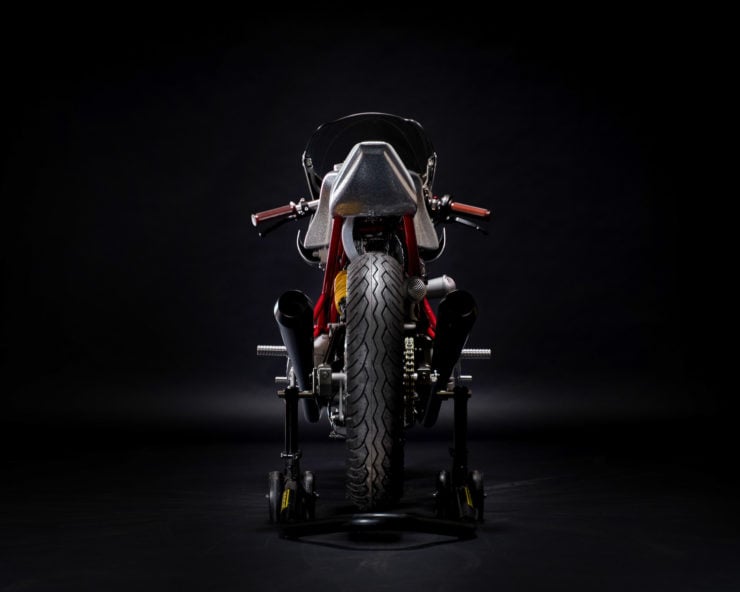 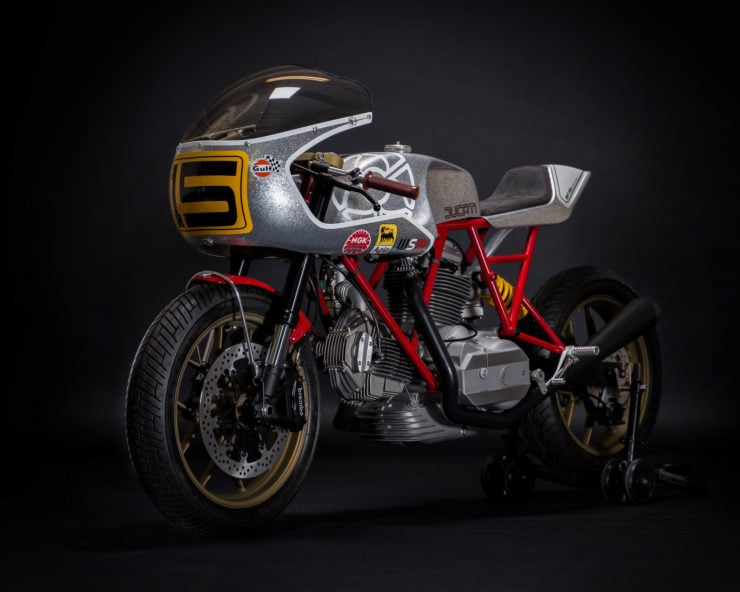 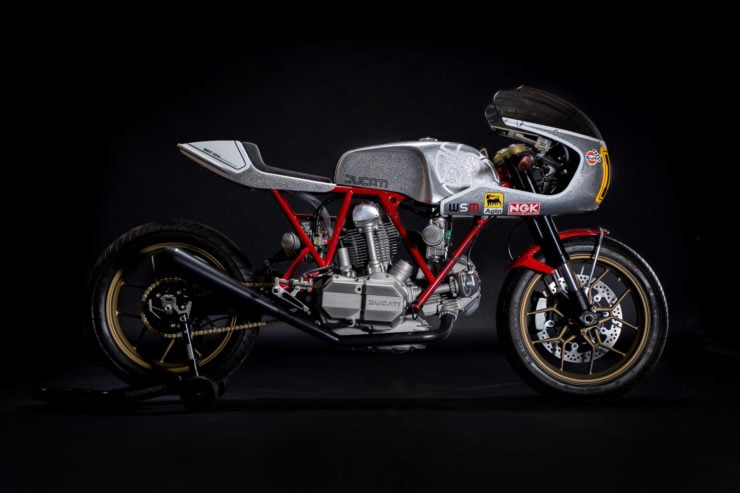 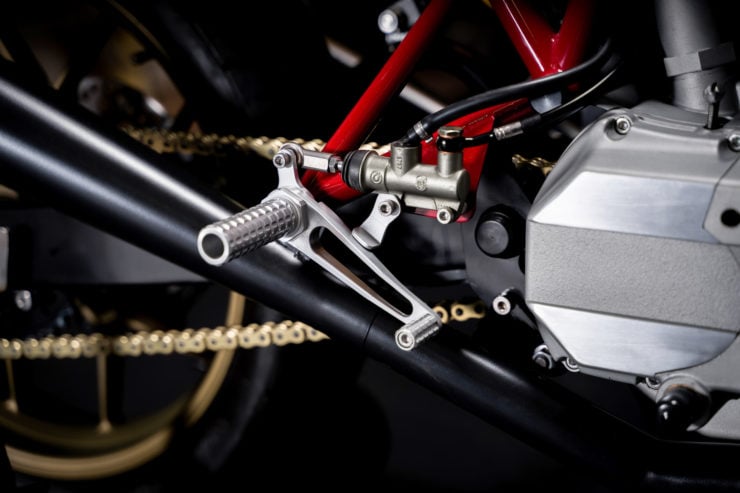 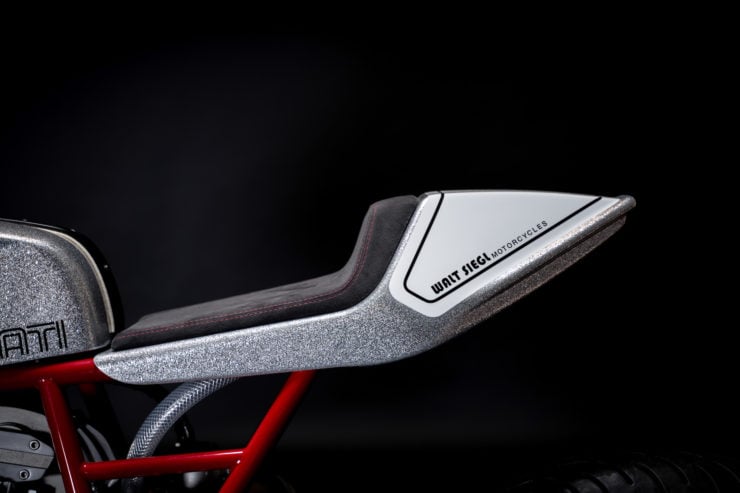 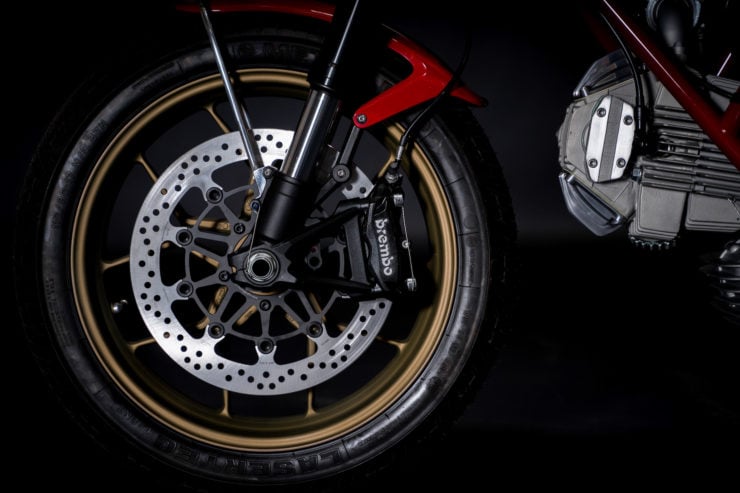 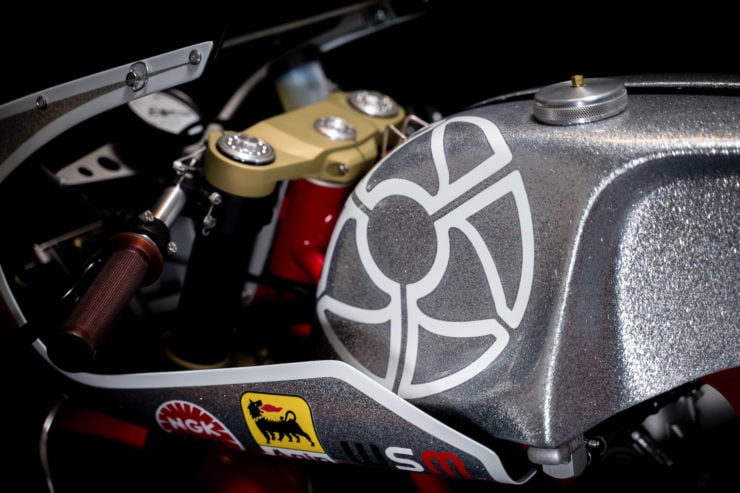 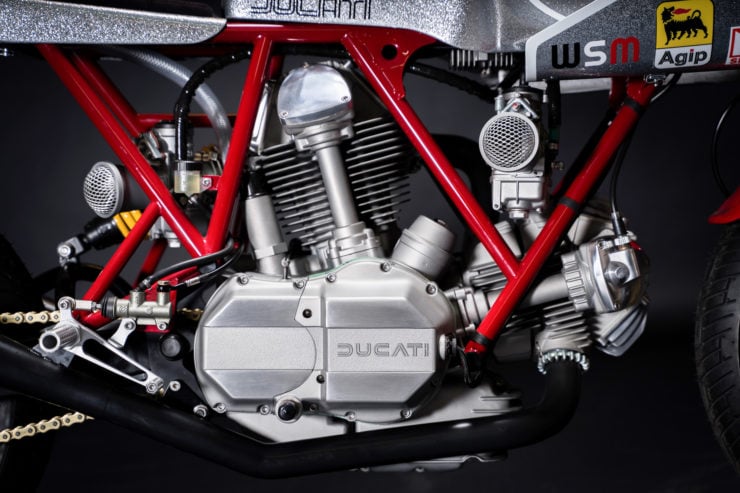 Images of the Ducati on the black background: Gregory George Moore 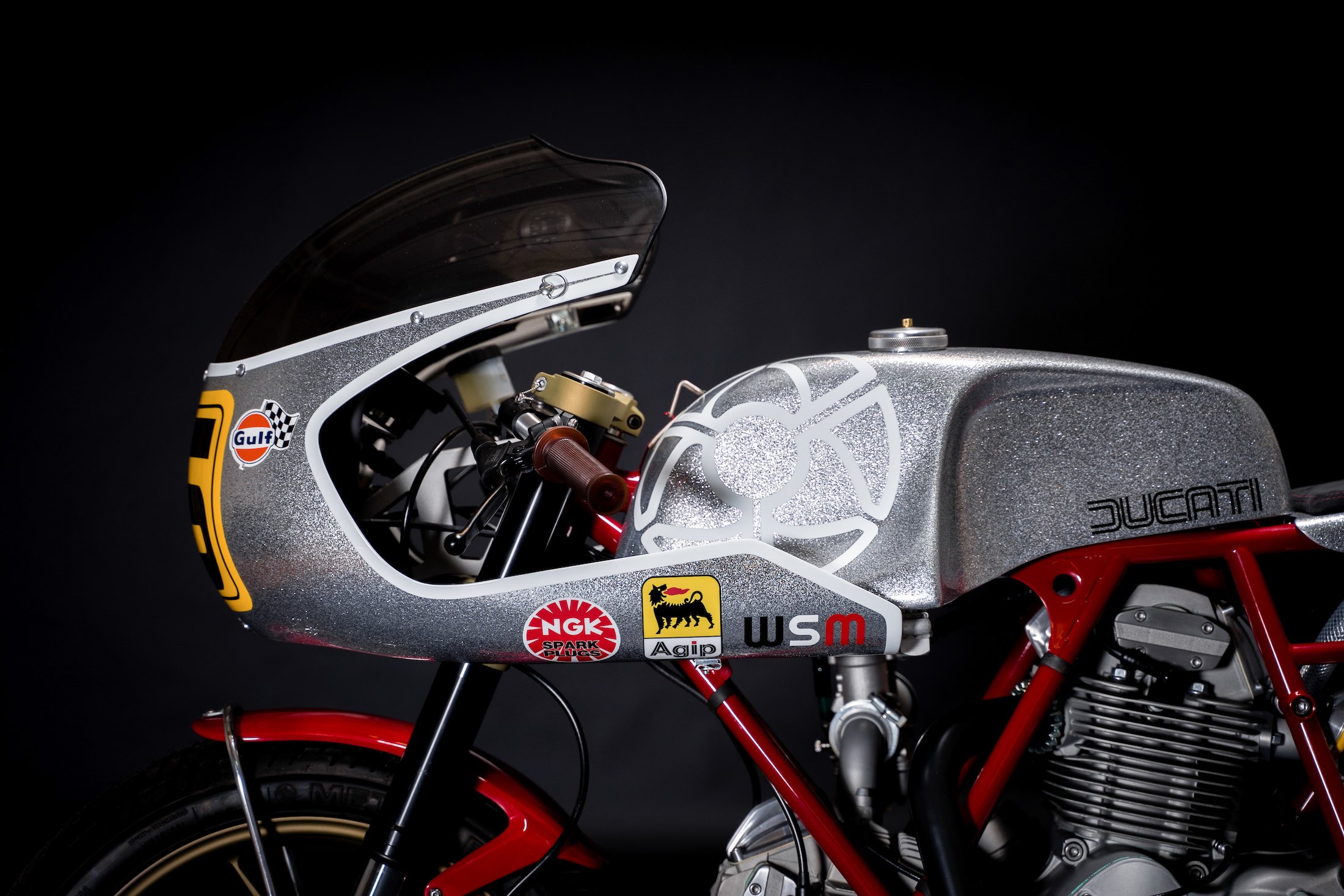 The Indian MM5A, often just called the Indian Mini Mini, has the distinction of being the…

This is the Suzuki RB50 GAG, a much loved minibike better known by its “Mini Gixxer”…