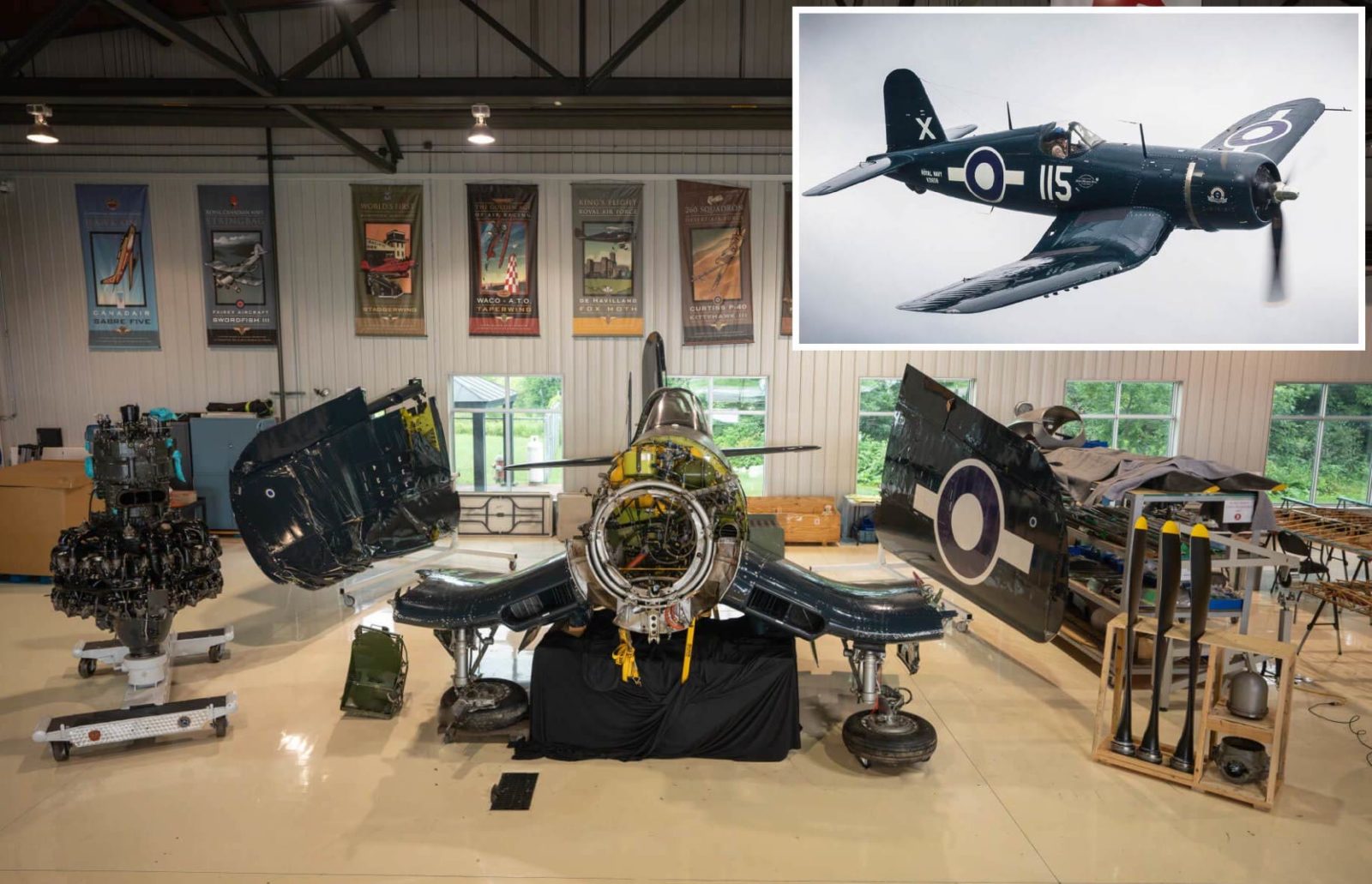 The Vought F4U Corsair was one of the most capable, and most feared fighters of WWII. It scored a kill-ratio of over 11:1 against Japanese fighters in the Pacific and it was later used as a fighter-bomber during the Korean War.

The aircraft you see here was built in 1945 and delivered to the US Navy, it was later used in the TV show “Baa Baa Black Sheep” filmed from 1976 to 1978 about the Black Sheep Squadron. In 2019 the aircraft was damaged in a landing accident in Canada and it’s now being sold as a restoration project.

The Vought F4U Corsair began development in the late 1930s, before WWII broke out but when seemed inevitable to many. The U.S. Navy Bureau of Aeronautics published two requests for proposals for both single and twin engined fighter aircraft.

Above Video: This is the original opening sequence for the 1970s-era TV show “Baa Baa Black Sheep,” about the Black Sheep Squadron. The Corsair shown in this article was used in the show, and is most likely one of those seen in this clip.

The Navy specified that the single engine aircraft should have a stall speed no higher than 70 miles per hour, a range of 1,000 miles or more, and the requested top speed was listed as “the maximum obtainable speed.”

The contact was signed in 1938 based on the Vought proposals for the aircraft that would become the Corsair. The first prototype flew in 1940, a slew of design upgrades were applied which meant it didn’t actually enter production until 1943.

As with all fighter aircraft designed for aircraft carrier duties the Corsair was over-engineered to withstand the oftentimes brutal landings that occur on deck. Once deployed in the Pacific theatre of war the Corsair quickly became well-known to enemy fighters for its speed, maneuverability, and its six wing-mounted .50 inch (12.7 mm) M2 Browning machine guns.

With a kill-ratio of over 11:1 the Corsair became one of the most successful fighters of WWII. It remains famous today for its wartime exploits and for its unusual gullwing design that was developed to keep the giant 13.1 foot propeller well off the deck. 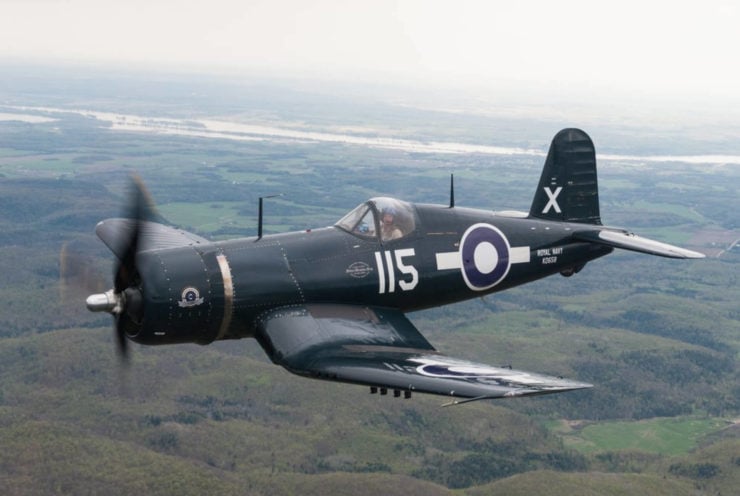 This undated photograph from Wings of Canada shows the aircraft during happier times, you’ll note that it still carries these same markings.

The combination of the 2,000 bhp Pratt & Whitney R-2800 Double Wasp twin-row 18 cylinder radial engine and the Hamilton Standard Hydromatic three-blade propeller produced one of the most powerful engine-propeller combinations ever flown on a fighter aircraft.

Over 12,500 examples of the Corsair were built, and in order to increase wartime production additional production contracts were given to Goodyear (designated FG) and Brewster (designated F3A).

The aircraft served both fighter and fighter bomber roles in WWII, later serving similar roles in the Korean War.

This Corsair left the Goodyear factory in Akron, Ohio in 1945 and was delivered to the US Navy.

The war was drawing to a close by this point and as a result this aircraft never saw active service. After the war it was used in various U.S. Navy Reserve Squadrons and by 1958 it was being used as a display in a park in Washington State. 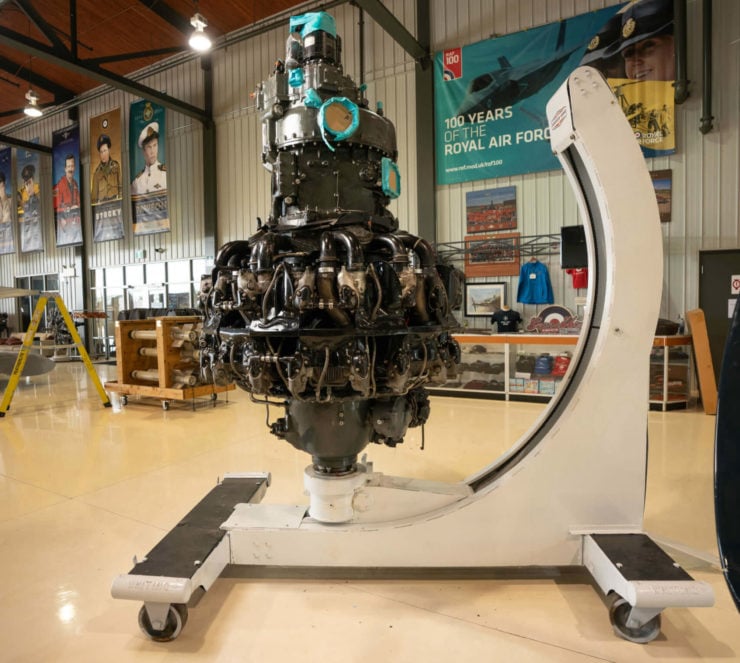 Thankfully the aircraft was saved in 1973 by legendary warbird collector David Tallichet who had it returned to flying condition.

After the restoration the plane became a celebrity of sorts, it was flown in the TV show “Baa Baa Black Sheep” from 1976 to 1978. This was a series about the famous exploits of the daring Pacific-based Black Sheep Squadron led by Marine Major Gregory “Pappy” Boyington during WWII.

In 1989 the plane was sent to John Lane and Unlimited Airpower for a full restoration that would take 13 years to complete. After it was done the plane was awarded the Grand Champion Warbird WWII trophy at EAA Airventure in Oshkosh in 2003.

Sadly in 2019 the Corsair was damaged in a landing accident in Canada, it’s remained in storage since this time and it’s now being offered for sale in the hopes that someone will take it on, and get it back into flying condition once again.

It’s being offered for sale by Platinum Fighter Sales and you can visit the listing here if you’d like to read more or enquire about buying it. 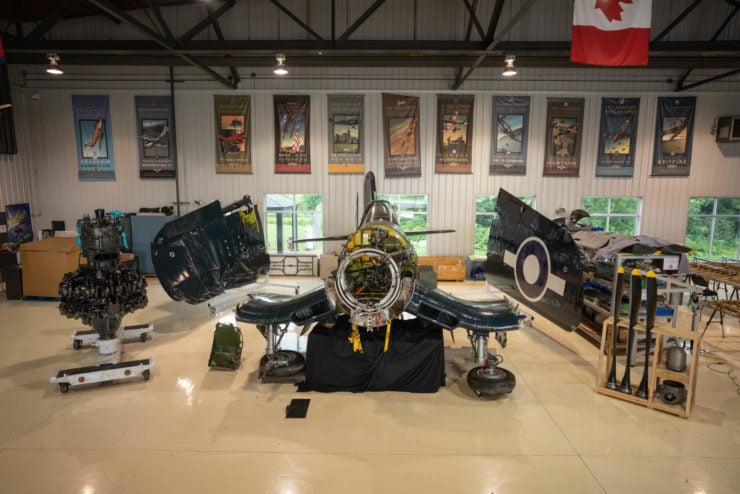 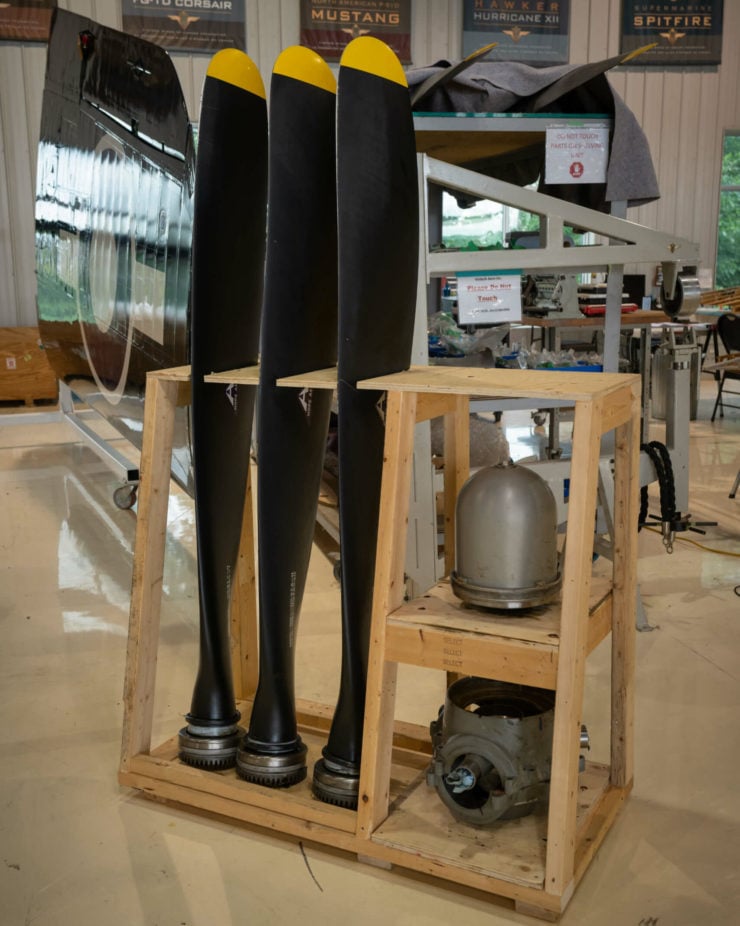 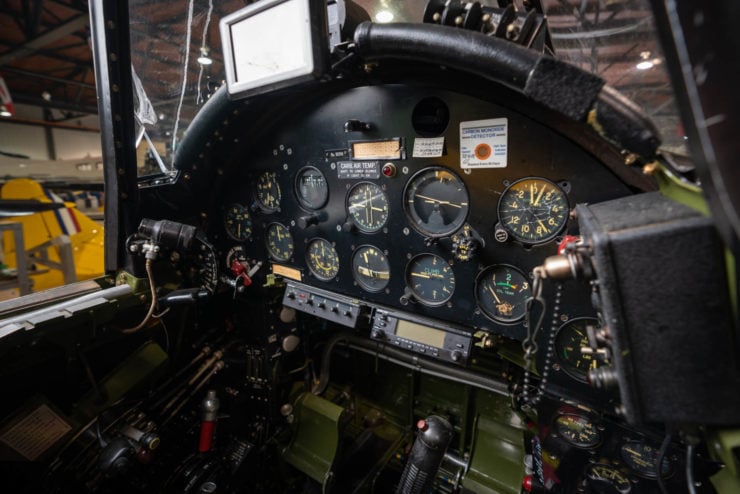 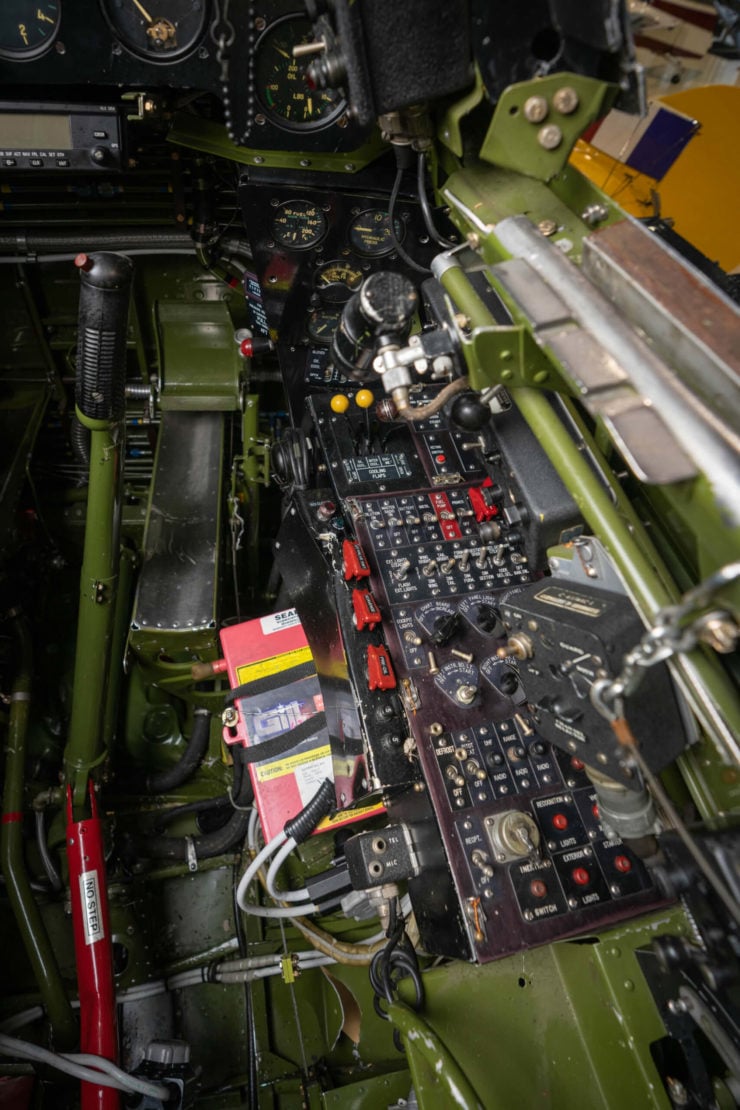 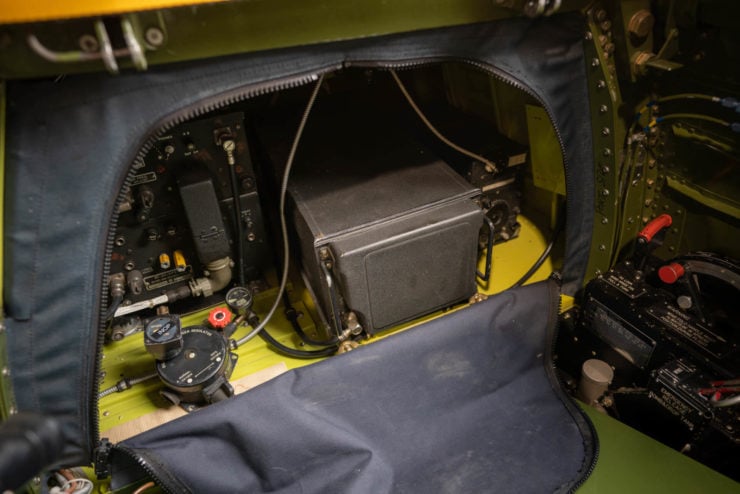 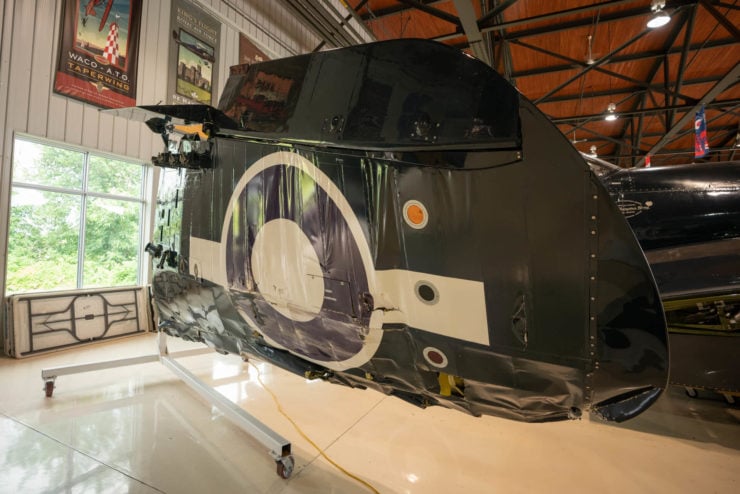 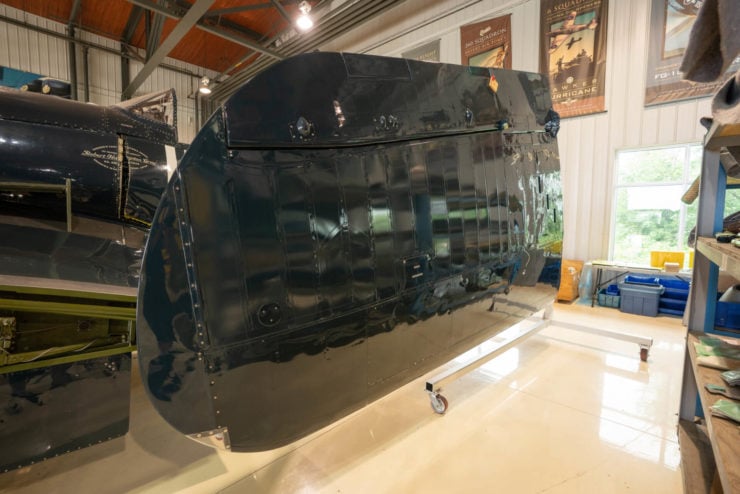 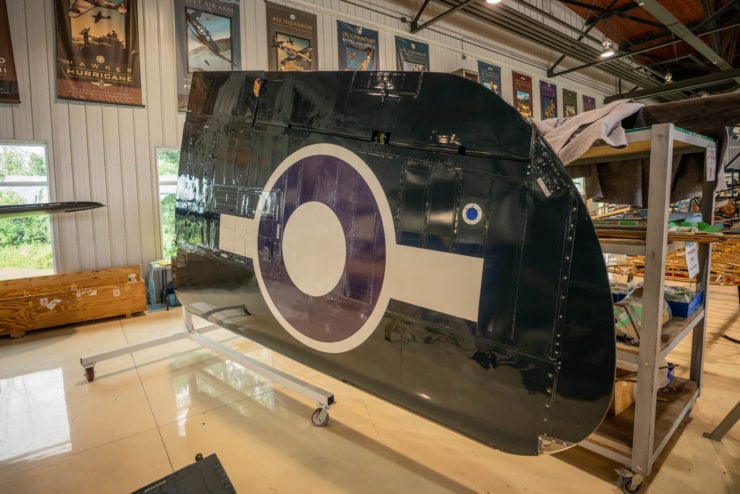 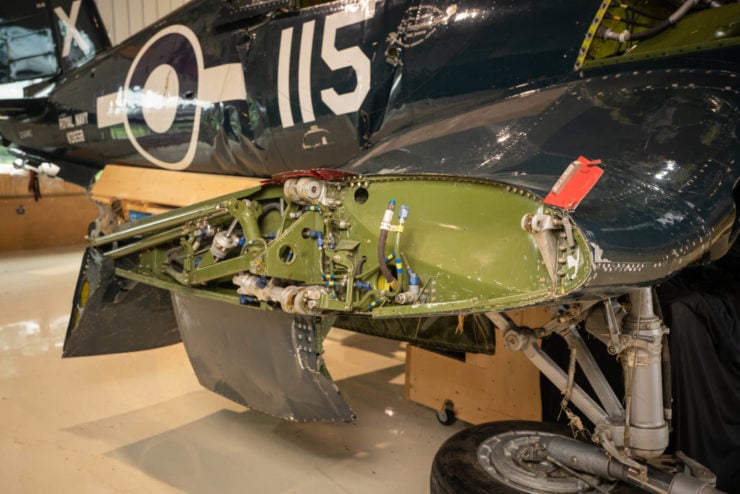 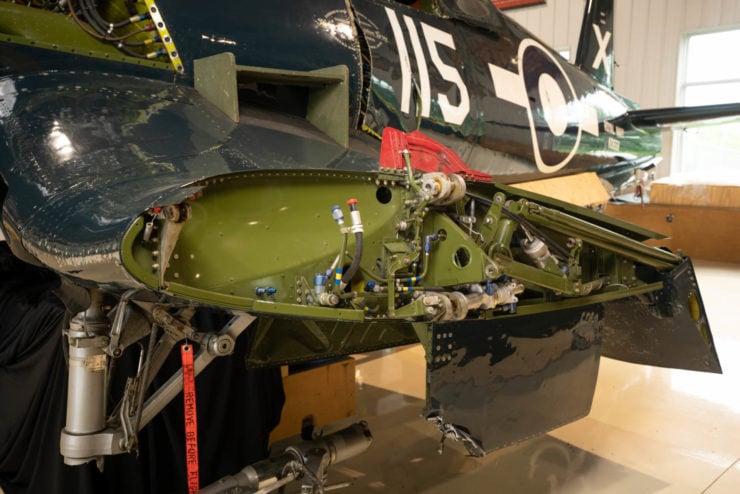 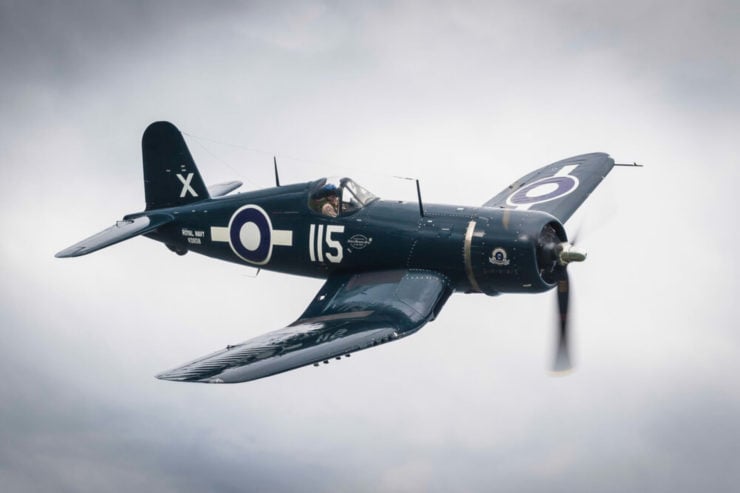