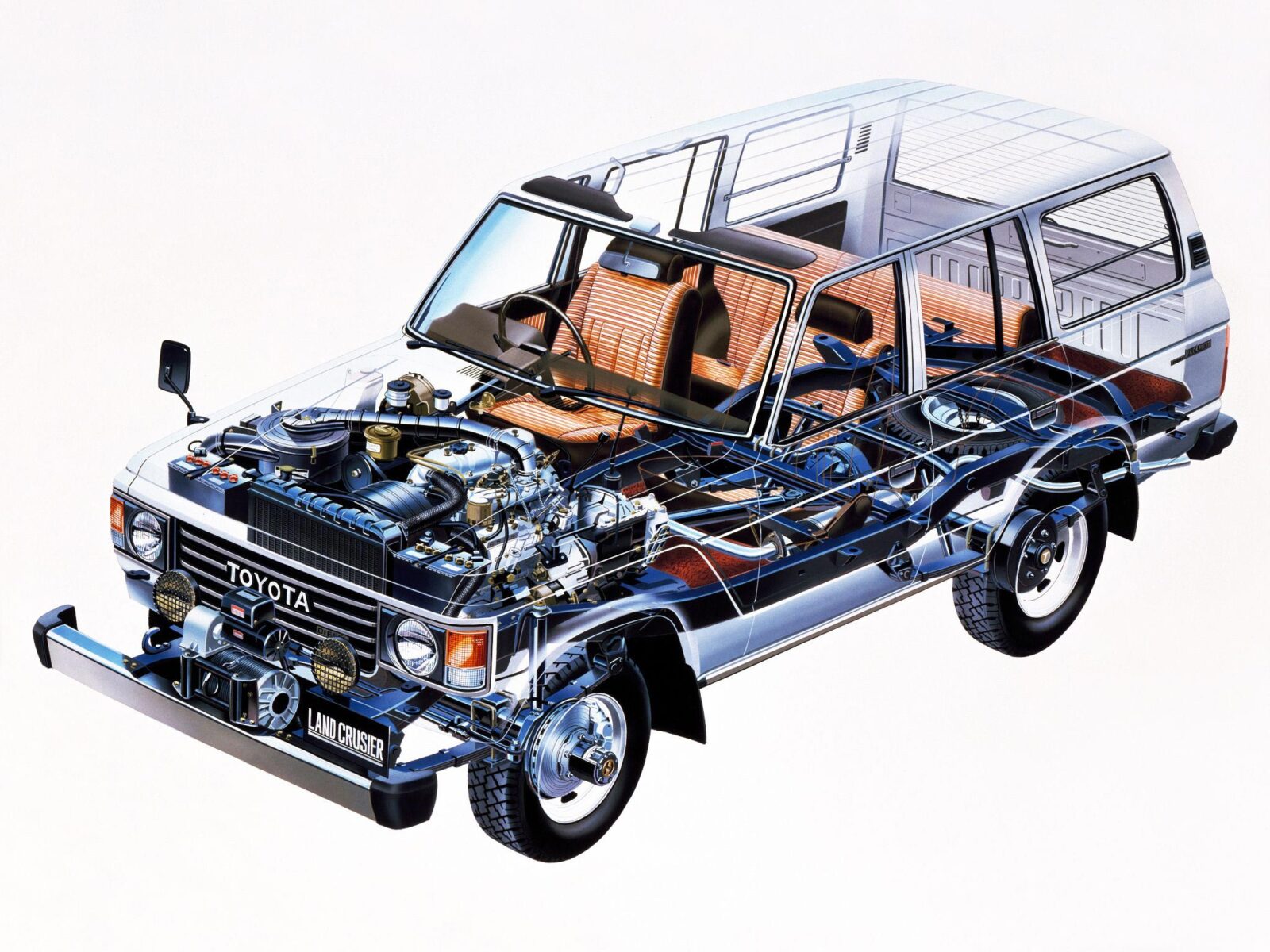 The story of the Toyota J60 began with Toyota’s tentative experimentation with making a station wagon version of their existing J40 Land Cruiser, and in so doing created what I happen to think of as the most desirable four wheel drive on earth but for one teensy weensy little downside: and that was its propensity to rust even if you just mentioned the word “rain”. 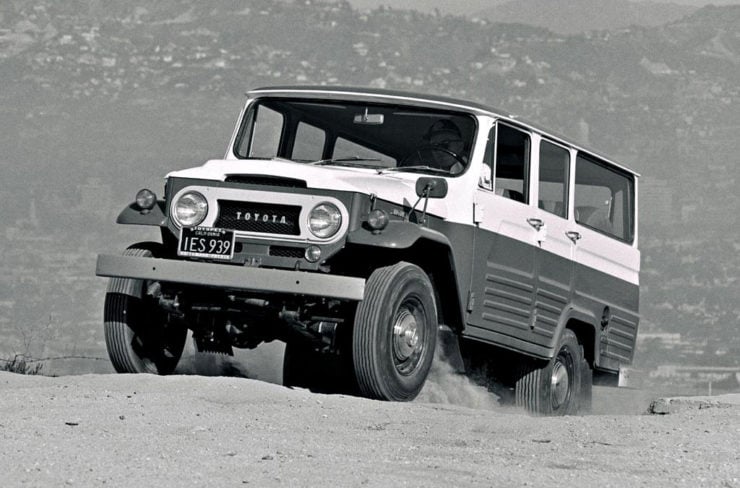 Toyota created the FJ45V by taking a long wheelbase FJ40 and having Gifu Body Company in Japan coachbuild a station wagon body on it. The first of the FJ45V’s rolled off the production line in 1963, three years after the J40 first went into production, and it was intended to compete with the Land Rover “Safari” station wagon.

The fact that the bodywork was custom made by Gifu Body Company appears to have been a contributing factor to the way these vehicles rusted but that being said they were one of the most desirable of all the Toyota Land Cruiser models. They were in production from 1963-1967 with only 5,080 made of which about 1,000 were made in left hand drive for the North American market, these being designated the FJ45LV, the “L” denoting left hand drive.

They were originally fitted with the 3.9 liter (3,878cc) OHV six cylinder Toyota Type F gasoline/petrol engine producing 125hp @ 3,600rpm and had a three speed gearbox with column shift. The gear lever for the transfer box was located on the dashboard. The use of a floor shift was avoided as the vehicle was fitted with a front bench seat to accommodate three people, so with another three seat bench at the rear the vehicle was a six seater: perfect for the family man with a wife, four children, and the family dog in the rearmost compartment.

The rear door arrangement for the FJ45V was an upward opening window “hatch” supported by struts and a fold down tailgate of quite generous size, an arrangement that provided a place to sit and have lunch, or the tailgate could be used as a bit of a makeshift workbench.

Back in the early 1980’s I tried to buy one of these Land Cruisers but even back then I found it impossible to get one that wasn’t carrying an excess of rust in the body, so I had to settle for a Series III Land Rover station wagon instead.

The FJ55 was Toyota’s second attempt at a station wagon. Introduced in 1967 when the FJ45V was phased out the FJ55 featured a more “refined” styled body which to some is more aesthetic but which I think lacks the functional aesthetic of the FJ45V.

The FJ55 was in all likelihood not any better than its predecessor with regards to its propensity for corrosion, but when new they certainly looked attractive on the showroom floor. The stylish body was complimented with having a passenger car style plastic dashboard with the gear lever and transfer shift lever both located on the floor: which was nicer for the driver but not so good for a passenger in the middle of the front bench seat. 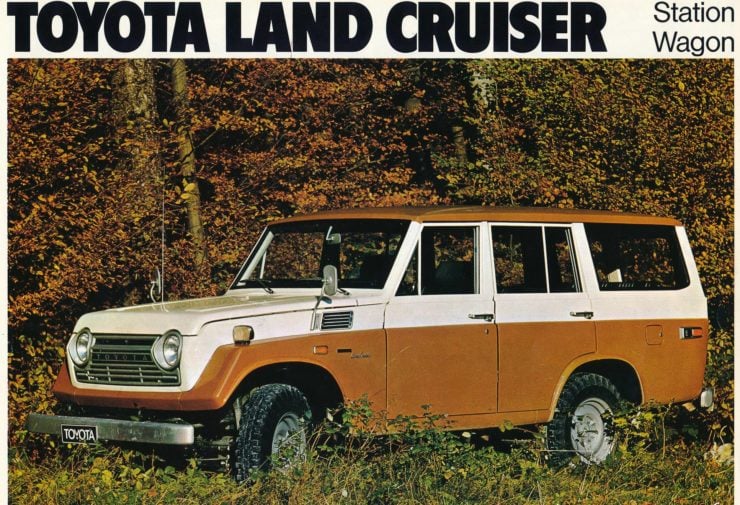 Mechanically the FJ55 was very much like the J40 and FJ45V; it used the same 3.9 liter Type F gasoline/petrol inline six cylinder engine, three speed gearbox, and high/low range transfer box. The suspension was the same live axles with leaf springs front and rear, and the brakes were drums all around.

In 1975 the 3.9 liter Type F engine was upgraded to the Type 2F 4.2 (4,230 cc) liter inline six producing 135hp with torque of 200 lb/ft. The transmission was upgraded to a four speed. Toyota designated this new model the FJ56V for the Japan domestic market but kept it as the FJ55 for all others. 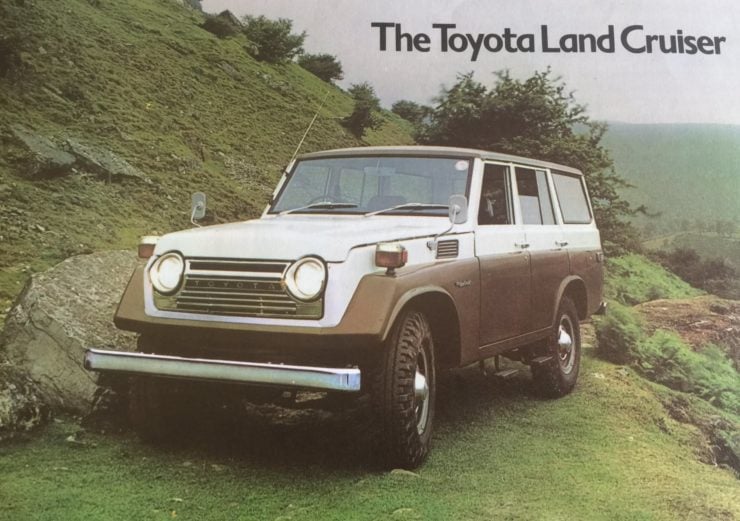 The tailgate was changed for the FJ55. The fold up rear window was removed and instead the fold-down tailgate was equipped with a wind up window which had to be wound down before the tailgate could be opened. The spare tire was stored under the vehicle at the rear and was accessed by inserting the supplied handle to wind it down so it could be pulled out. This was a very convenient arrangement making it unnecessary to empty gear out of the rear luggage compartment in order to get at the spare.

By 1980 passenger cars were changing and becoming rather more city and town oriented than previously. Whereas the passenger cars of the post-war period up into the 1970’s were normally capable of some serious rough track driving the newer generations of the 1980’s and 1990’s began losing that.

As an example my father and mother in law drove their Ford XY Falcon utility loaded with a Villa Nova camper on the back on a drive on the Gunbarrel Highway which traverses the center of Australia West to East and is known for being, in a word, rough. The XY Falcon was one of the last of the tough Ford utilities and it handled the trip without breakdown but it certainly acquired some serious re-modelling of its underside, the rock dents were something to behold. 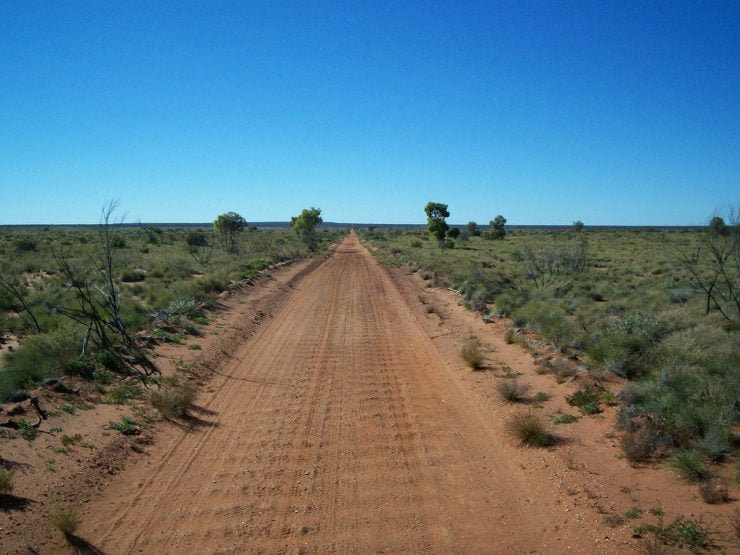 After that trip my father in law decided he needed to get a new vehicle for travels to wild and interesting places, and he didn’t go and buy one of the new Falcon utilities, instead he upgraded to a Toyota Land Cruiser J60 which offered the ability to “take the path less traveled” and to do it in comfort, with armchair like seats, air-conditioning, excellent speed and handling on surfaced roads, and when the going got rough and tough it could be expected to keep going.

What had given birth to the more luxuriously appointed four wheel drive vehicles from Japan were the Sports Utility Vehicles being made in the United States and the very expensive British Range Rover which had made its debut a decade earlier in 1970. Both Toyota and Nissan had realized that they could build automobiles that would provide Range Rover comfort and versatility at a much lower price. Their previous experimentation in this market sector with the FJ45V and FJ55 had demonstrated this was economically viable, so the Japanese took the plunge and it paid off handsomely. 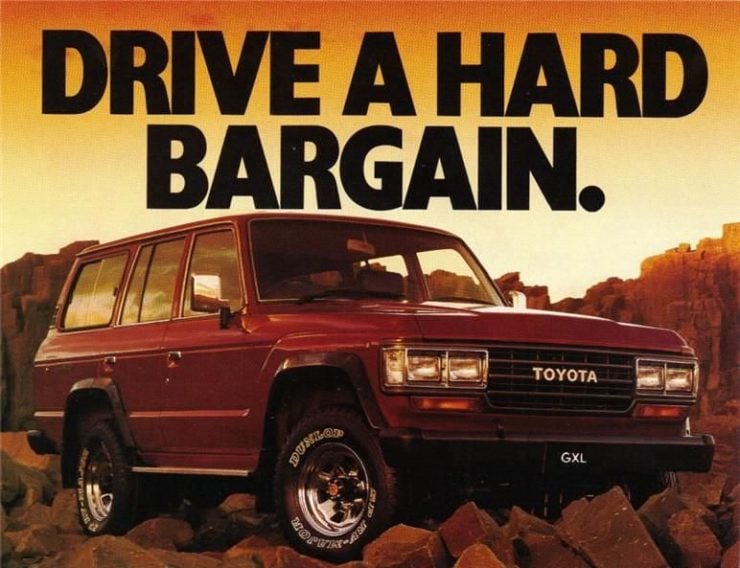 The FJ60 was made as a five door station wagon but was far more luxuriously appointed than its FJ45V and FJ55 forebears. It provided luxury car interior appointments, an all synchromesh manual gearbox that was easy and positive to use, power steering, and air-conditioning. It was a vehicle that a reasonably experienced driver would find to be easy to drive with its positive road holding, it was a vehicle that you would feel confident in almost immediately.

Other passenger car type features included a heated rear window and an efficient heater/demister. Seats were cloth trimmed with vinyl sides and were firm but comfortable enough for long hours behind the wheel: the front bucket seats providing good lateral support. In 1981 a high roof version was introduced, the purpose of the high roof being to accommodate the rear air-conditioning system. 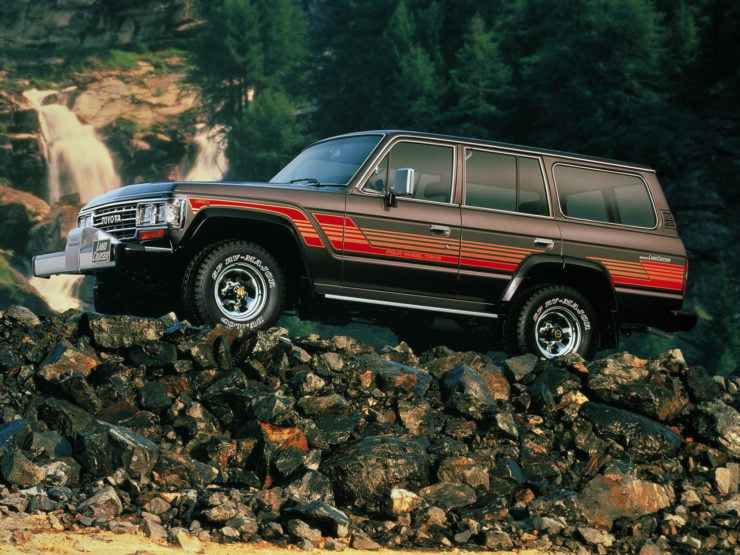 In 1985 the FJ62 model was introduced fitted with the Toyota 4.0 liter (3,955 cc) inline OHV six cylinder Type 3F gasoline/petrol engine. This engine was not introduced in the US market vehicles until 1988. The Type 3F engine produced 155 hp with torque of 220 lb/ft and had a redesigned cylinder head to reduce warping and separation between inlet and exhaust manifolds.

As a result of this engine’s shorter stroke and other changes the redline was able to be increased making it a better performing unit for highway driving. These low revving engines are known for their longevity and commonly reach 300,000 miles (480,000 km) before needing a major overhaul.

1985 also saw the introduction of the Land Cruiser HJ61 fitted with a Type 12H-T 4.0 liter (3,980 cc) turbocharged diesel engine. This engine featured direct-injection and produced 134 hp @ 3,500 rpm with 232 lb/ft of torque. I remember being passed by one of these on a dirt road in Australia’s far north and it sounded like a jet aircraft going for take-off as he whizzed past me in a cloud of dust: presumably he really needed to get where he was going in a hurry, but the sight and sound of that HJ61 as it hurtled along in a cloud of red dust was quite impressive. 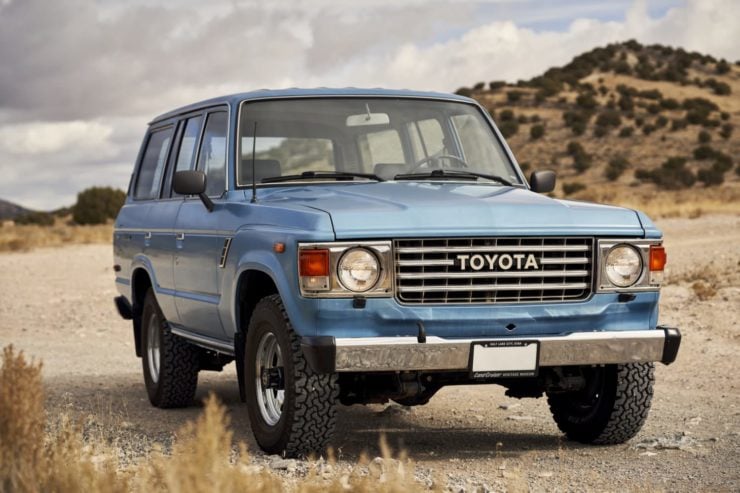 The HJ61 was offered with the H55F five speed manual or four speed A440F automatic transmission.

In 1988 the naturally aspirated gasoline/petrol engine was changed to the Type 3F-E version of the 3F inline six cylinder 4.0 liter which was fitted with electronic fuel injection. Also in 1988 the final version of the J60 was introduced: the Land Cruier FJ62G VX-Series.

Toyota’s progressive move into building its station wagon went through three main models to arrive at the vehicle that set the standard, which was the Land Cruiser J60. This was a vehicle that was popular with families, people living and working on the land, and retirees such as my father and mother in law who hitched it up to their caravan to travel around and across Australia multiple times living an itinerant and happy life.

The Land Cruiser J60 was the turning point and all that has followed it has been inspired by it. Wherever in the world you lived, in a Land Cruiser J60 you could venture out on the road less traveled and do it in champagne and caviar comfort – no champers for the driver of course! 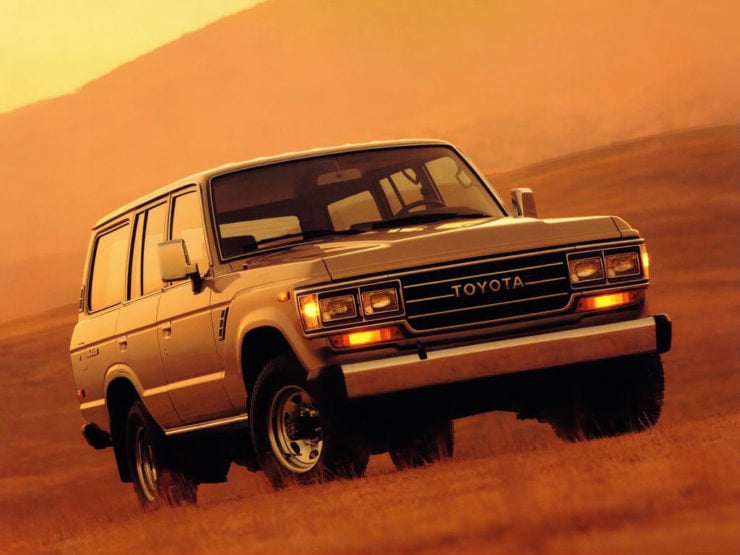 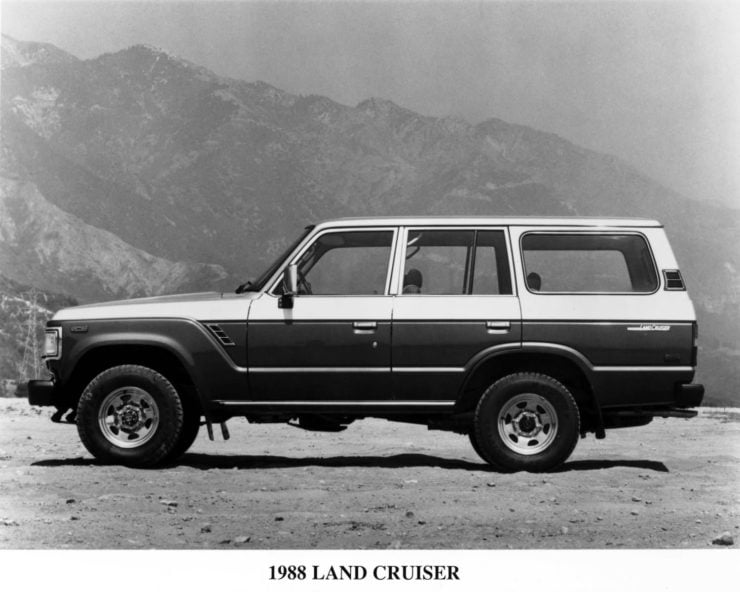 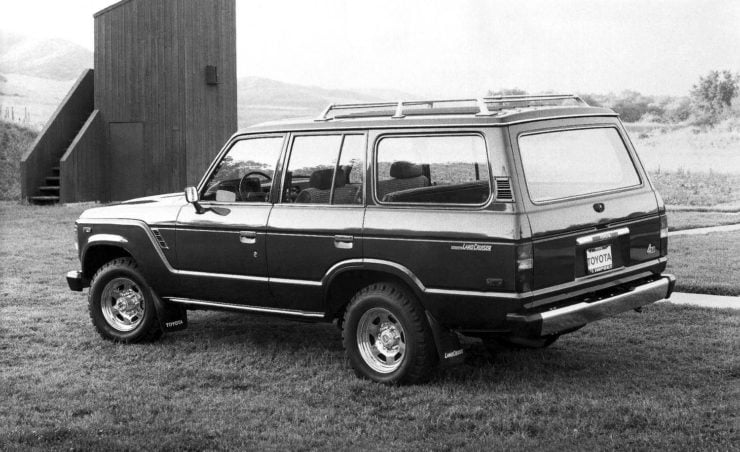 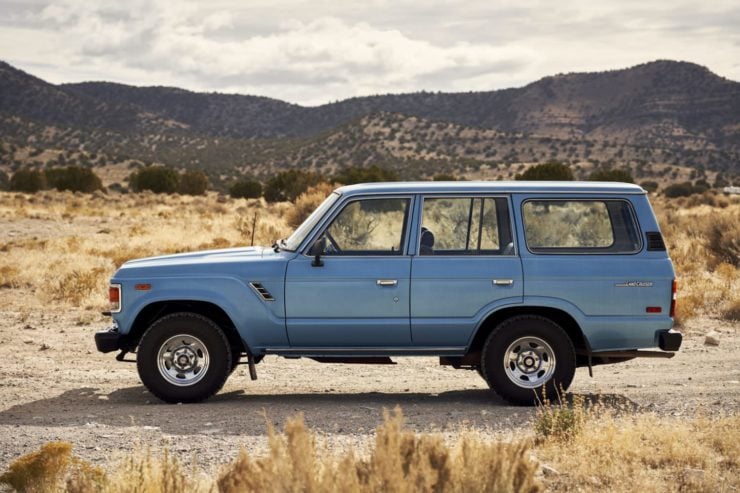 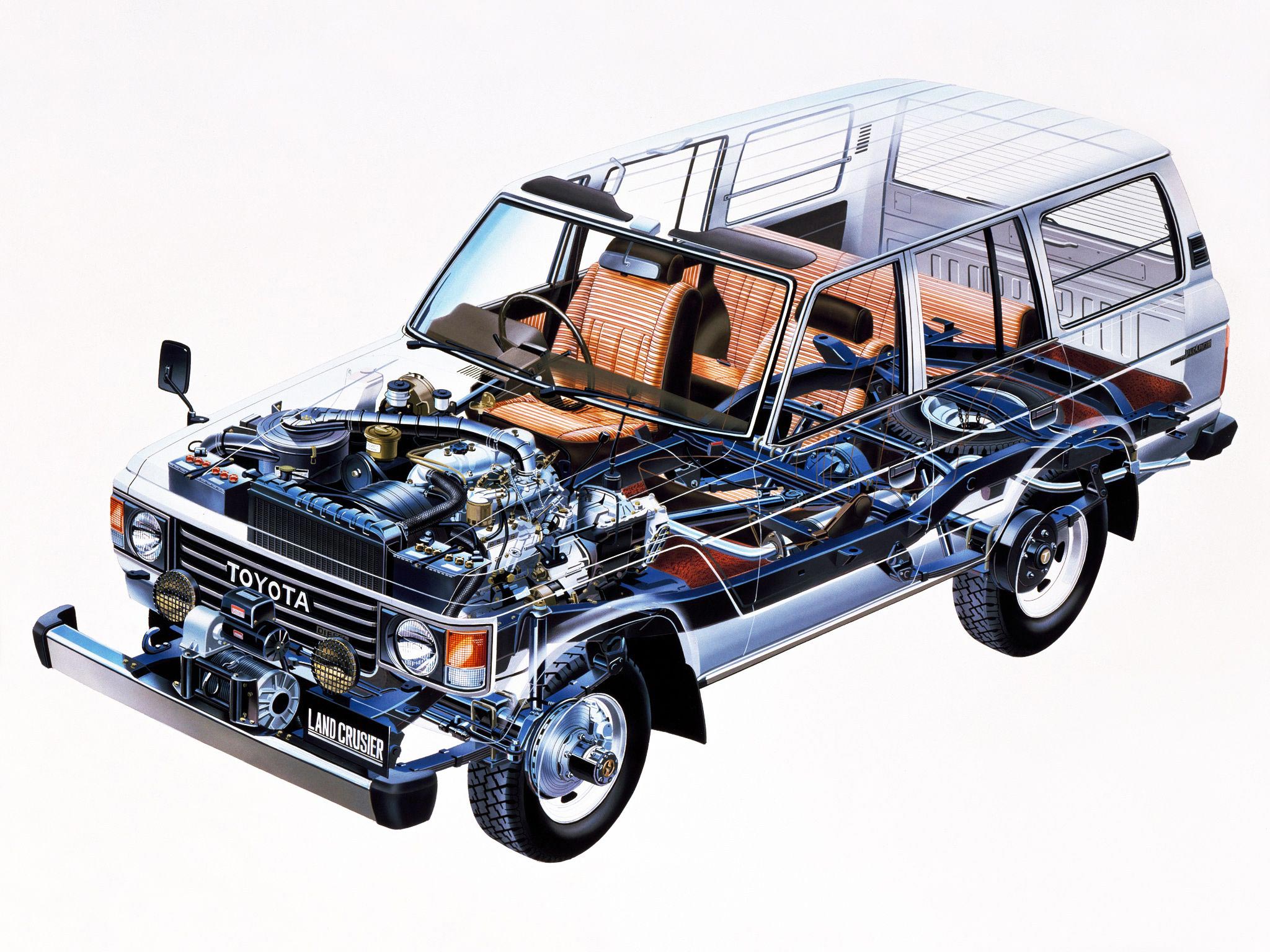