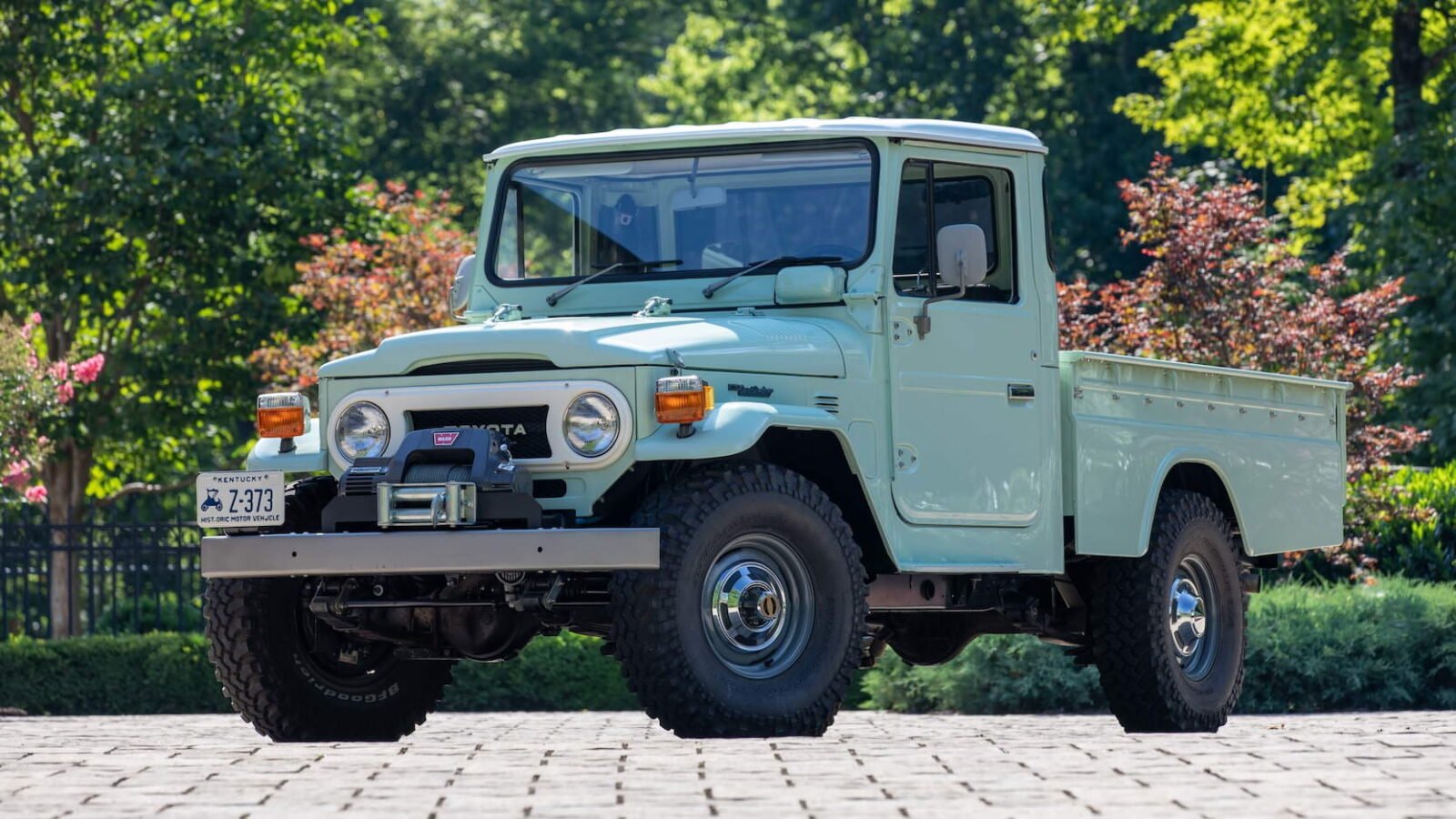 This Toyota FJ45 Land Cruiser Pickup was given a comprehensive restoration back in 2003, the original inline-six cylinder engine was replaced with a 350 cu. in. small block V8 which sends power to the wheels via a highway-friendly 5-speed transmission.

The FJ40 series Toyota Land Cruisers have skyrocketed in popularity in recent years along with many of their classic four-wheel drive peers from the era. Meticulous concours restorations are popular but perhaps even more popular are restomods – restoring and modifying the vehicles with uprated engines, suspension, brakes, and adding some additional features like air conditioning.

The FJ40 (and BJ40) series of Land Cruisers first appeared in 1960 and although the Japanese-built version was replaced by the J70 series Land Cruisers in 1984, the Brazilian-built Toyota Bandeirante version remained in production until 2001 and is still a common sight on the streets of Brazil today. 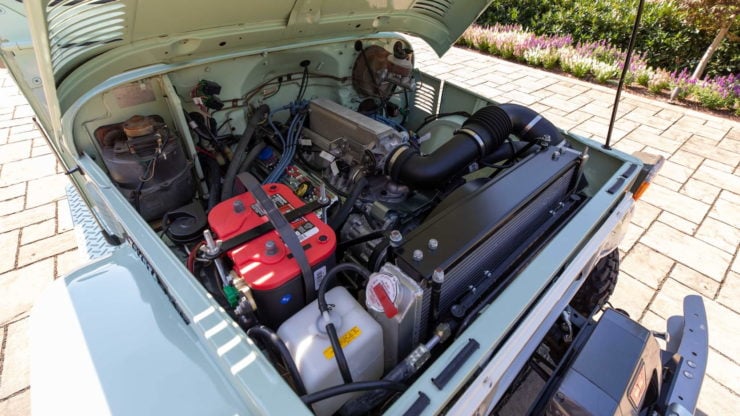 The FJ45 you see here is a restomod, the team that built it paid close attention to keep the exterior looking as stock as possible, with the exception of the larger tires and Warn winch on the front of course. Inside the cab you’ll find the standard seats and steering wheel, but there’s a discreetly installed modern sound system with speakers in the doors as well as an under-dash air-conditioning system.

In the engine bay you’ll find a 350 cu. in. small block V8 crate engine, this is a fuel injected version of the legendary Chevy V8 for added reliability. Although the listing doesn’t specify the engine does appear to be the distinctive looking Chevrolet Performance Ram Jet 350, if this is correct then the engine is capable of 345 hp and 396 ft lbs of torque, it has a 9.0:1 compression ratio, a hydraulic roller camshaft, and the engine’s unique intake manifold and plenum is 9.75 inches tall – just fitting under the hood.

Horsepower is significantly improved over the original F series 3.9 litre inline-six from Toyota that produced up to 125 hp and 209 ft lbs of torque. This increase in power necessitated a new transmission so the factory-fitted three-speed was removed and replaced with a more modern five-speed manual that was better able to handle the output from the new V8. 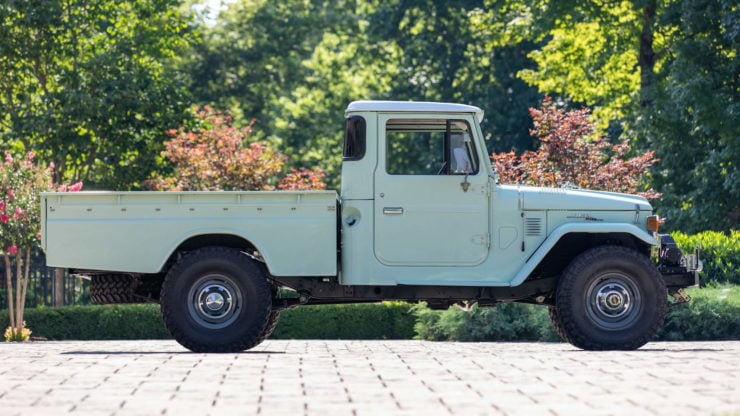 The restomod was clearly intended to produce a four-wheel drive that was genuinely capable of off-roading, it’s fitted with period correct steel wheels shod with BF Goodrich Mud Terrain tires, there are Warn locking hubs fitted up front and a Warn winch to help get you out of trouble if required.

Since the vehicle was completed in 2003 by Toyota of Orange County in California it’s been garage kept in excellent condition, a close inspection leaves you with the impression that the restoration was completed far more recently.

The FJ45 is now accompanied by its maintenance and restoration documents as well as some manuals, it’s due to roll across the auction block with Mecum in late August, it’s being offered with no reserve and you can click here if you’d like to visit the listing to read more or register to bid. 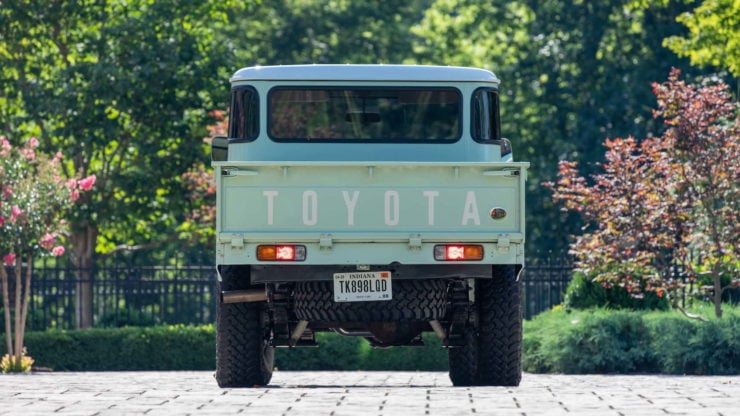 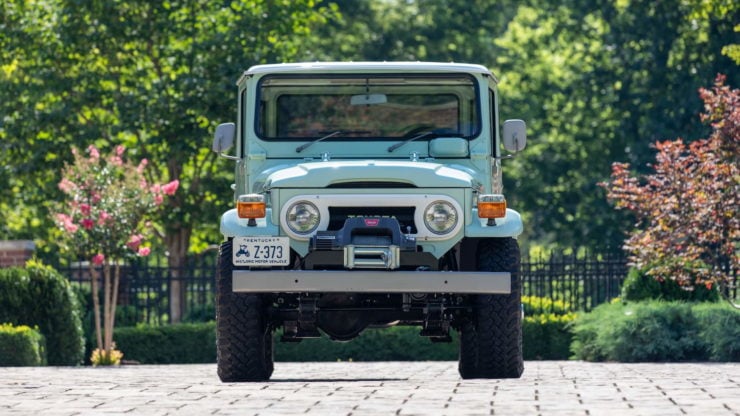 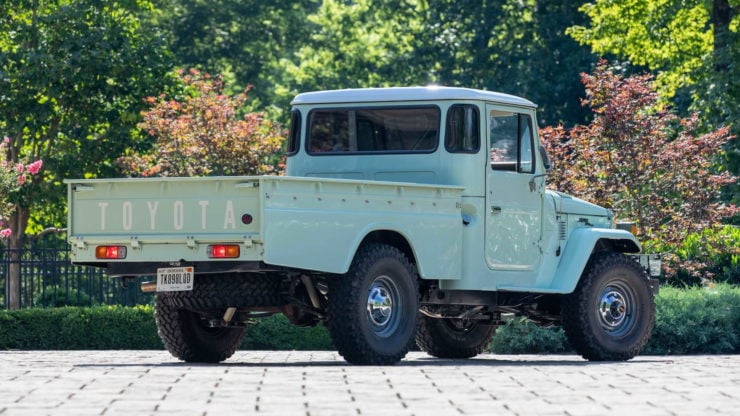 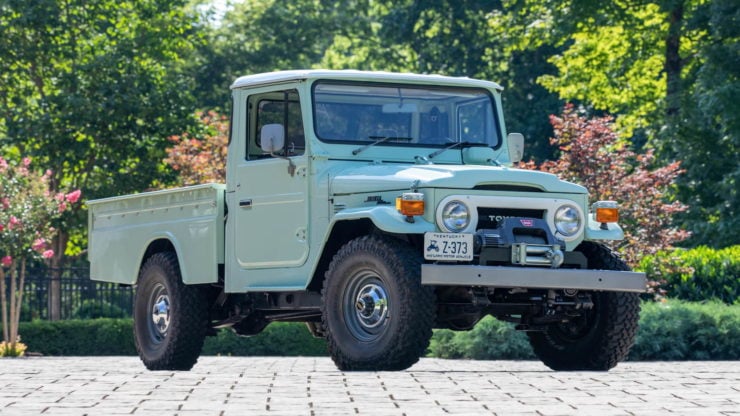 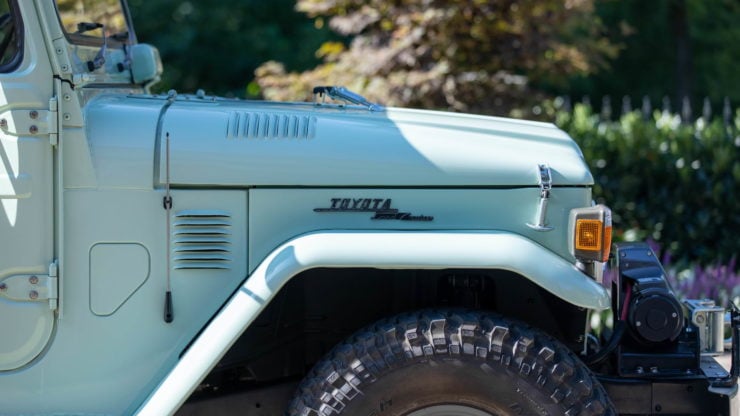 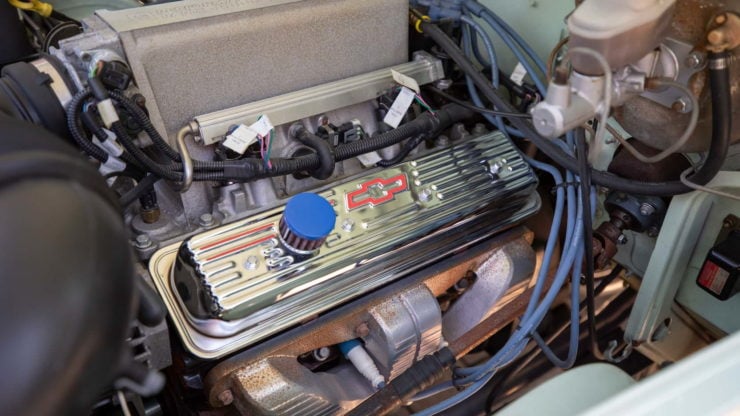 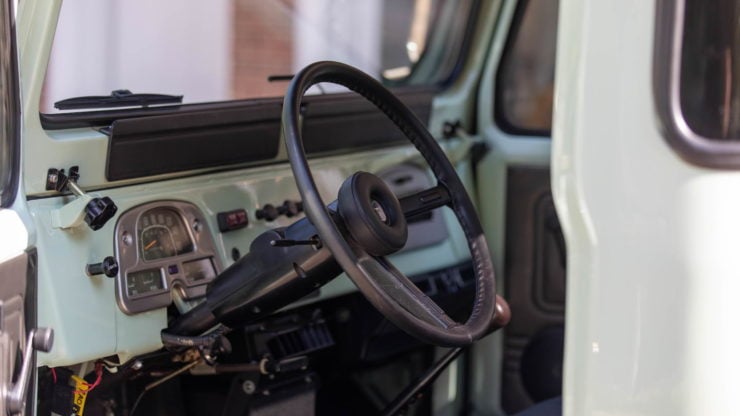 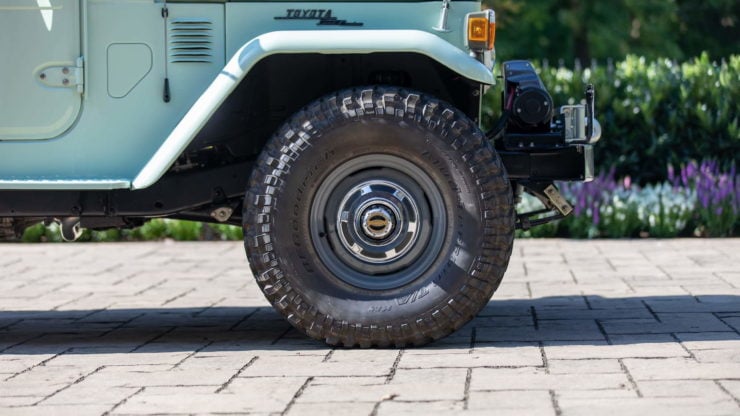 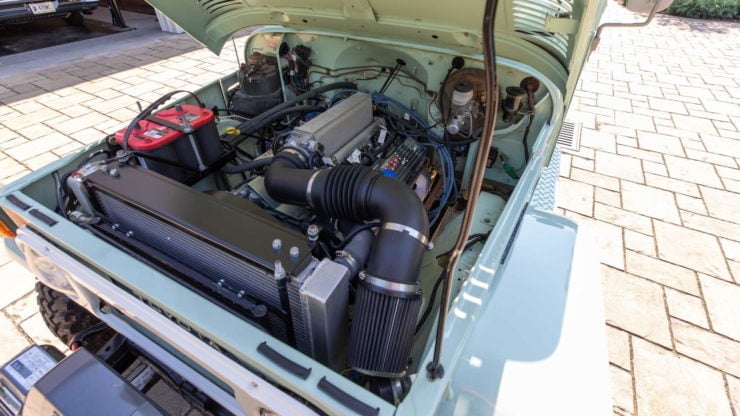 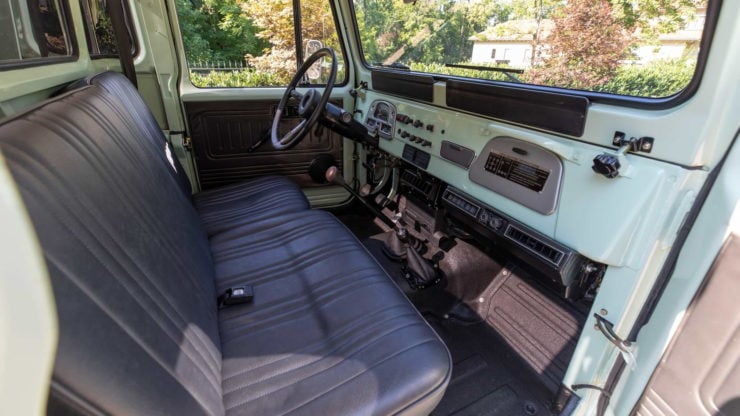 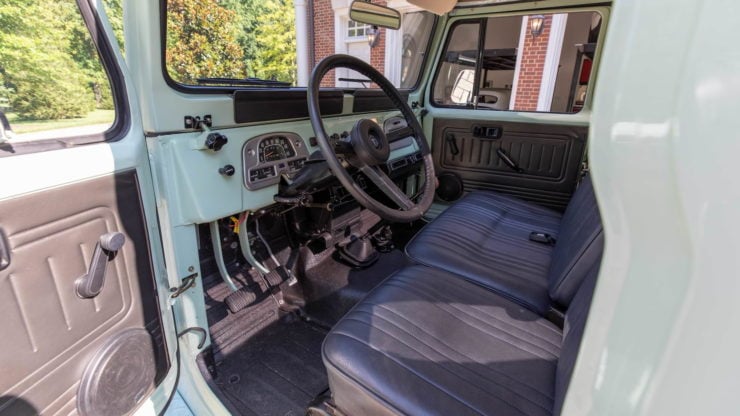 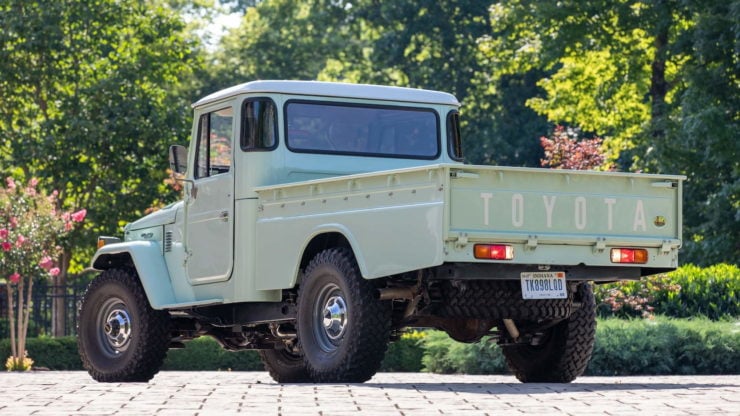 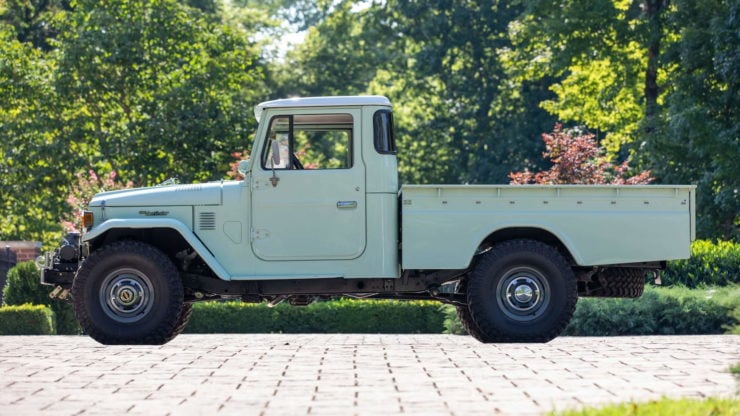 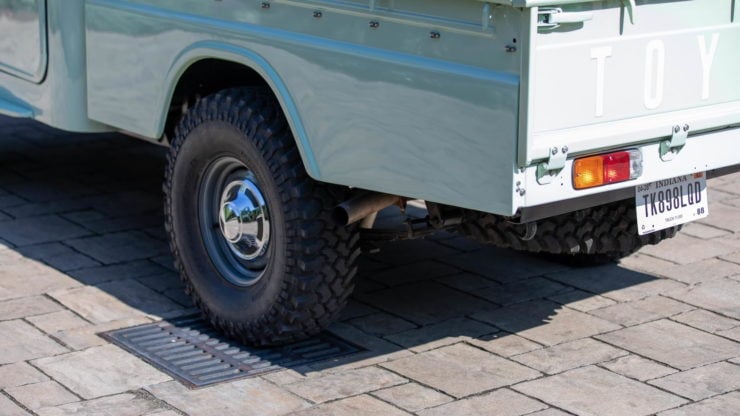 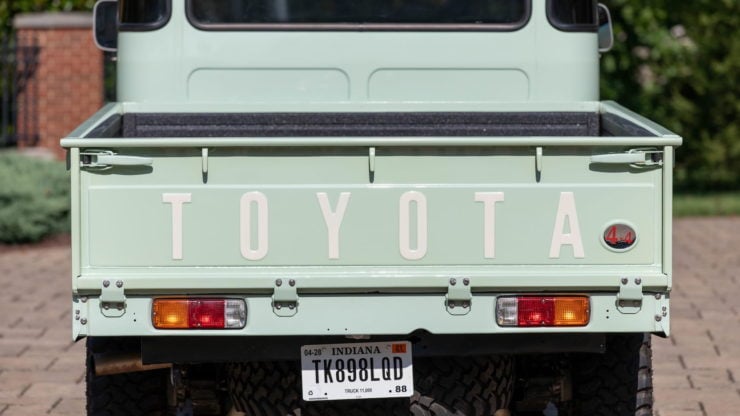