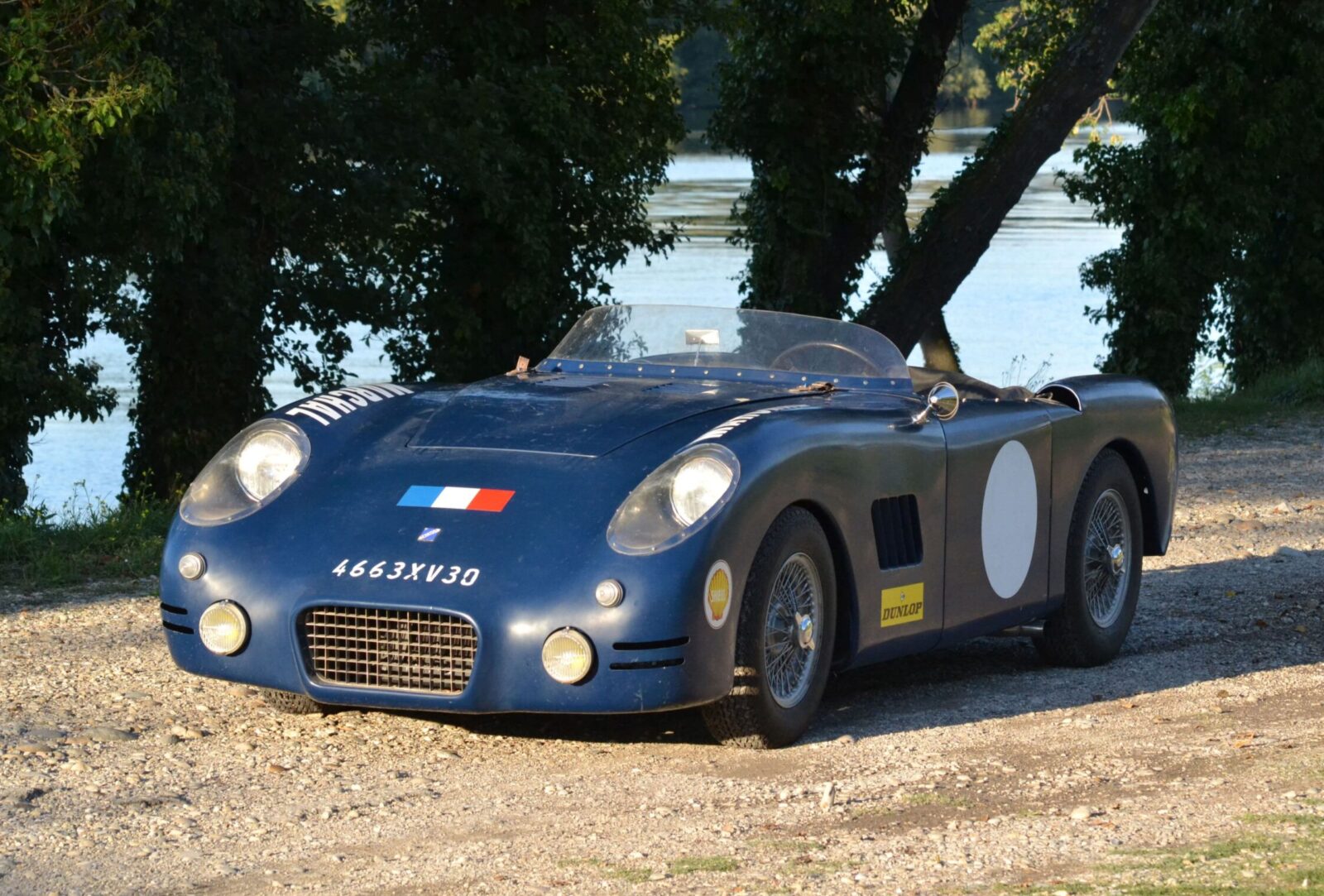 Very few examples of the Talbot-Lago T14 America Barquette were built, largely due to the precarious financial situation the company found itself in by the end of the 1950s.

The final, and ultimately unsuccessful, attempt to stay in business would see the French automaker building cars fitted with V8 engines sourced from BMW in the hope of appealing to Americans, who liked V8 power and European sports cars.

Unfortunately the strategy would fail, though not for want of effort or aim, the same strategy worked well for a number of other automakers. The car you see here was built from parts left over after the company was acquired by Simca, it was built in the style of the Talbots that raced at Le Mans in 1956 and thanks to its 2.5 liter V8 and lightweight alloy bodywork it’s a quick machine. 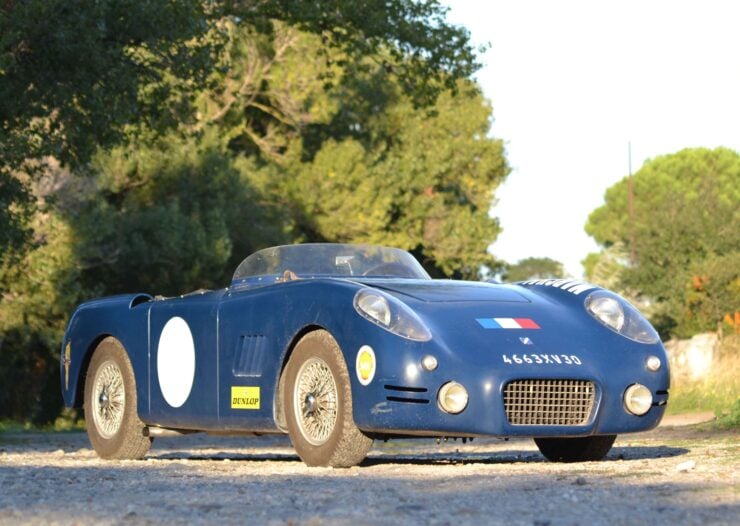 The car was specifically designed to look like the 1956 Le Mans race cars, though it’s likely faster thanks to its vintage BMW V8 engine.

The company had originally started out all the way back in 1896 as Automobiles Darracq France, after being bought out the company was renamed Talbot in 1916 (though they still regularly used the Darracq name), and in 1936 Talbot was acquired by Antonio Lago in a a management buy-out – resulting in the name Talbot-Lago.

Some of the most beautiful cars of the 1930s and 1940s were based on Talbot underpinnings, typically with bodies built by leading coachbuilders like Figoni & Falaschi and Saoutchik.

Antonio Lago had a deep appreciation for the importance of racing for any car manufacturer, as much for publicity as for engineering advancement, and so the Talbot name regularly lined up on the grids of many of the era’s most important races.

One of the company’s most successful cars from this time was the Talbot-Lago T26C, a single-seat race car with a naturally-aspirated 4.5 liter straight-six engine and a four-speed gearbox. The T26C would place second in its first race – the 1948 Monaco Grand Prix, and it would win both the 1949 Belgian Grand Prix and the 1949 French Grand Prix.

A specially modified two-seat version of this car would be entered into the 1950 24 Hours of Le Mans and take outright victory, a major moment for the French brand. The T26C would continue taking wins well into the 1950s, with Doug Whiteford winning the 1952 and 1953 Australian Grand Prix. 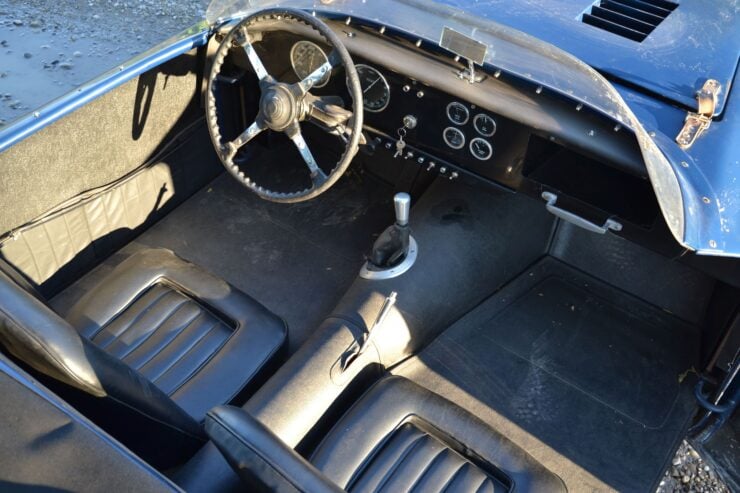 The interior is as spartan as you may expect, with just the essentials. As was normal for a sports/racing roadster in the 1950s the car has no seat belts, no side windows, and no folding top.

In 1954 Talbot-Lago unveiled a new engine called the T14 LS and then a year later in 1955 they unveiled the car that would be powered by it – the beautiful Talbot-Lago 2500 Coupé T14 LS. The engine would be a disaster for the company, it was unreliable and it quickly earned a bad reputation, with little choice in the matter they licensed the new 2.5 liter BMW V8 and renamed the car the “Talbot Lago America.”

Only 12 or so examples of this car would be sold before Anthony Lago realized the writing was on the wall, and accepted the offer from Simca to buy Talbot-Lago and all of its assets in 1958. Simca would continue building the car for a short time, though with their own Ford flathead-derived V8s which were notably less powerful.

Talbot-Lago would be shuttered in 1959, leaving a decades long legacy of road and race cars that still create energetic bidding wars at auction on both sides of the Atlantic and no small amount of subterfuge.

The car you see here only exists thanks to French brothers Dominique and Marc Dupont. Both men were dyed-in-the-wool Talbot lovers, in fact Dominique had been the president of the Talbot Club for many years. 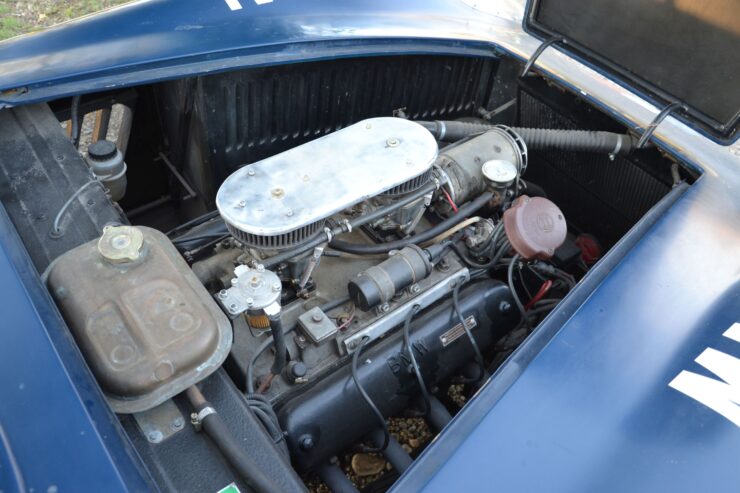 Power is provided by the powerful BMW V8 that was also used in the BMW 507 and the BMW 503.

After Talbot was shuttered the two men were able to buy a stock of original parts from former Talbot racing driver Georges Grignard, and they set about creating what would likely be the last Talbot-Lagos ever made.

The Talbot-Lago T14 America Barquette you see here was constructed by the brothers in the 1970s using a correct chassis, mechanical parts, and BMW V8 engine. They had an alloy body built as it would have been back in the mid-1950s, using the style elements of the 1956 Le Mans Talbot-Lago, that had been driven by Louis Rosier and Jean Behra.

Thanks to the car’s very low weight and its relatively powerful 1950s BMW V8 engine it’s capable of impressive performance even by modern standards. It was given a major servicing in 2020 and it’s now being listed for sale with Artcurial. 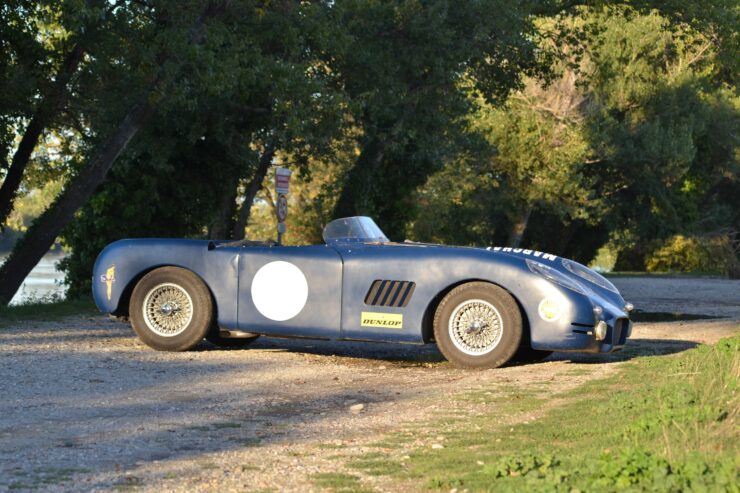 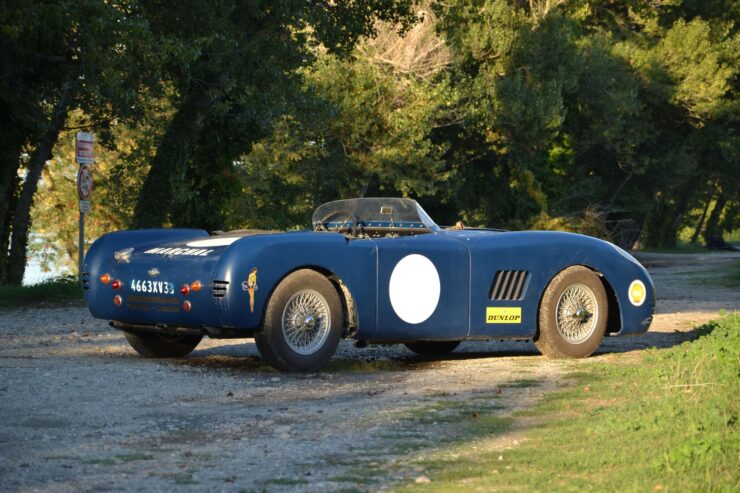 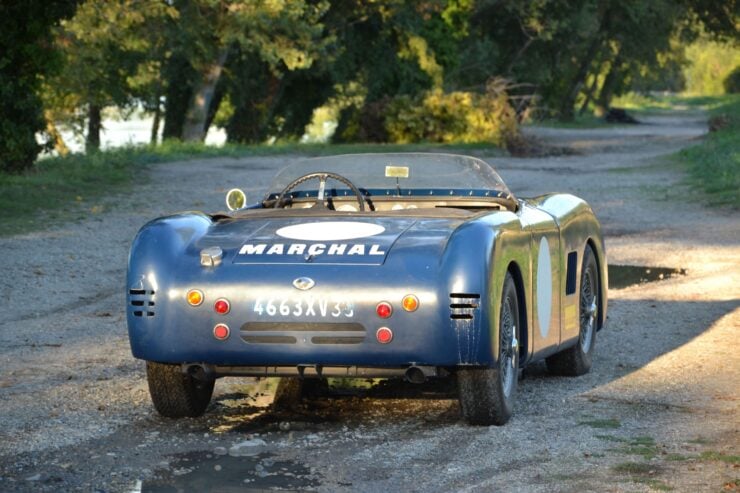 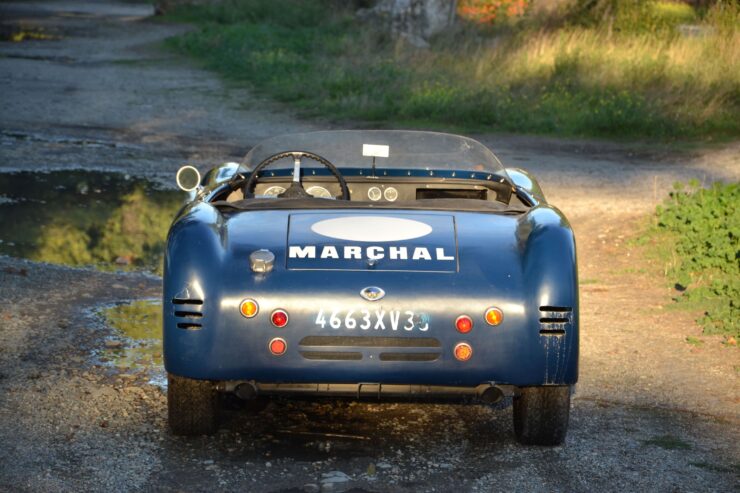 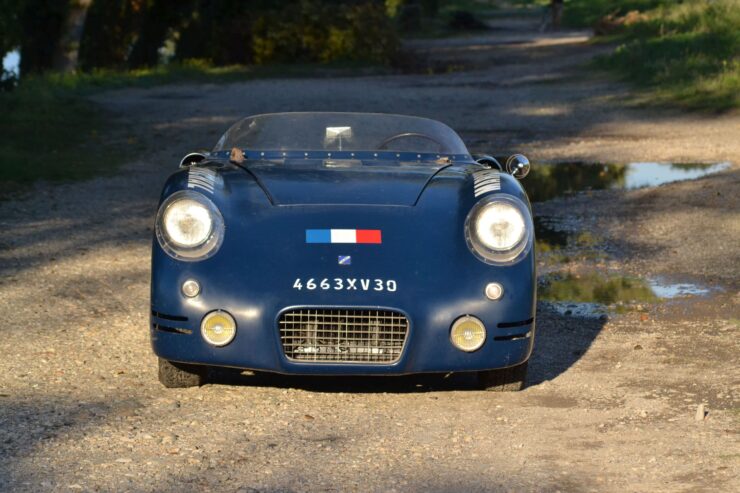 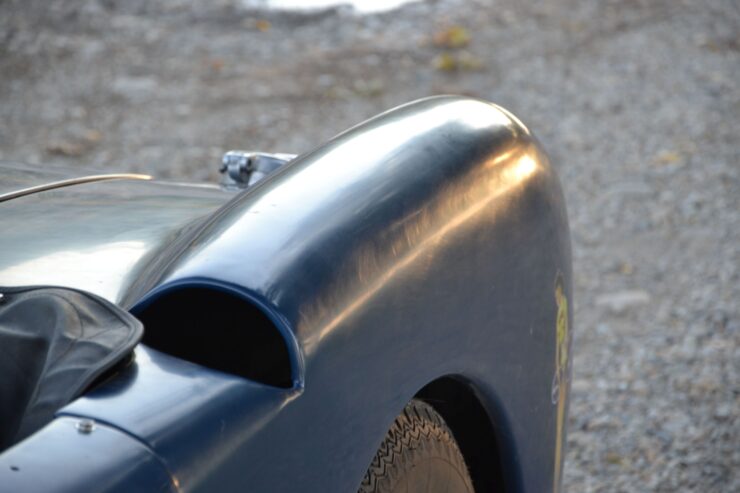 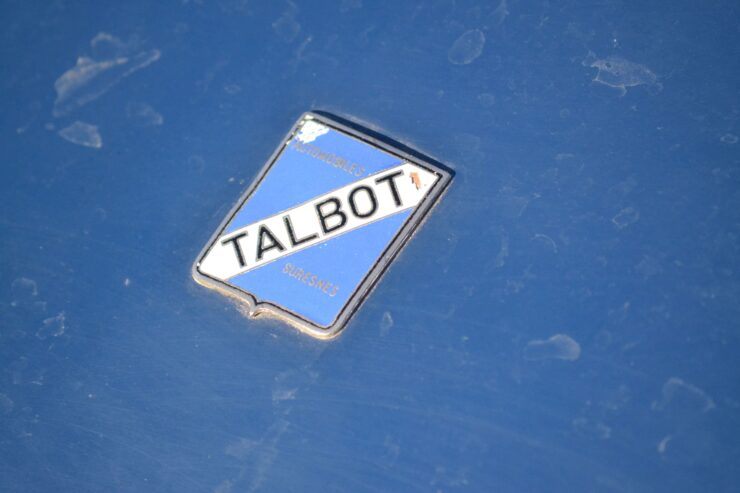 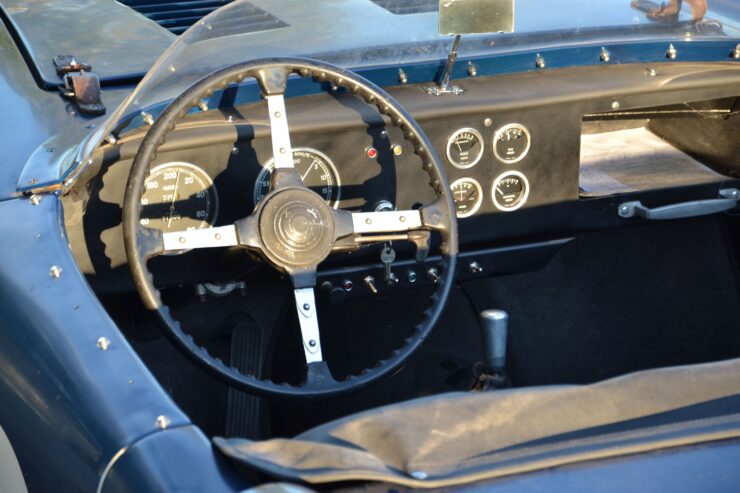 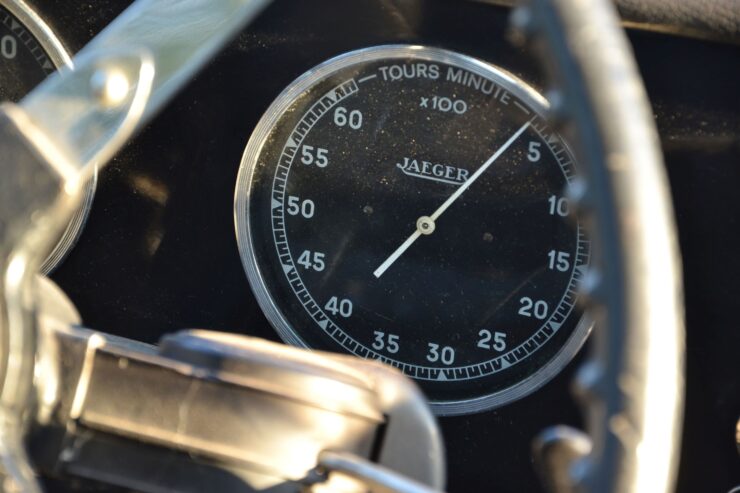 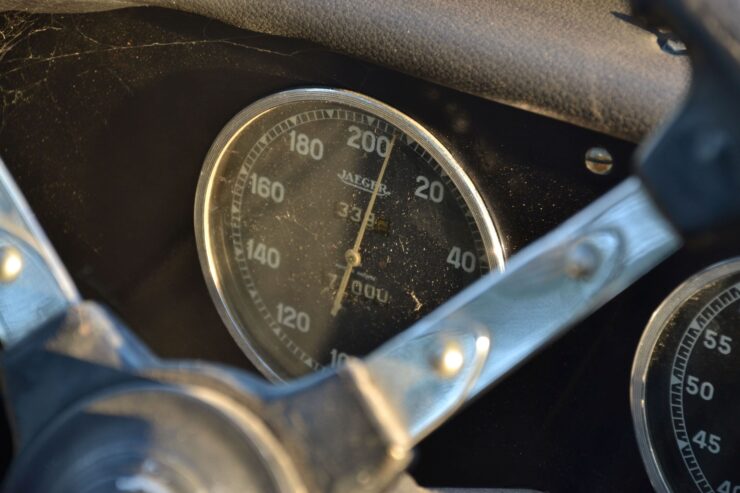 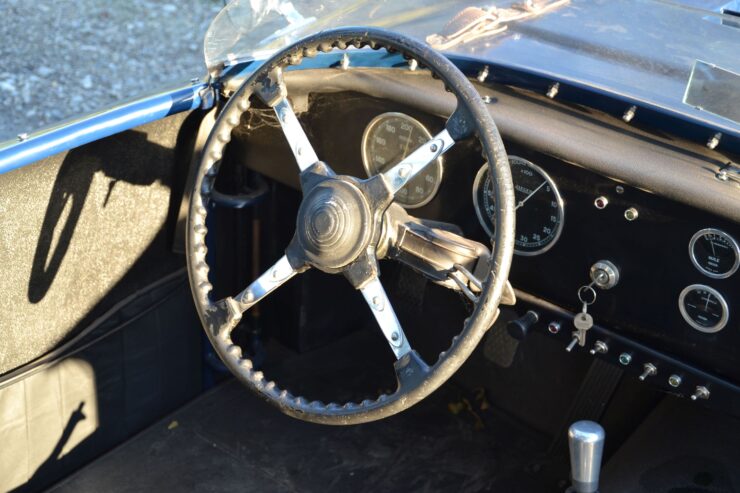