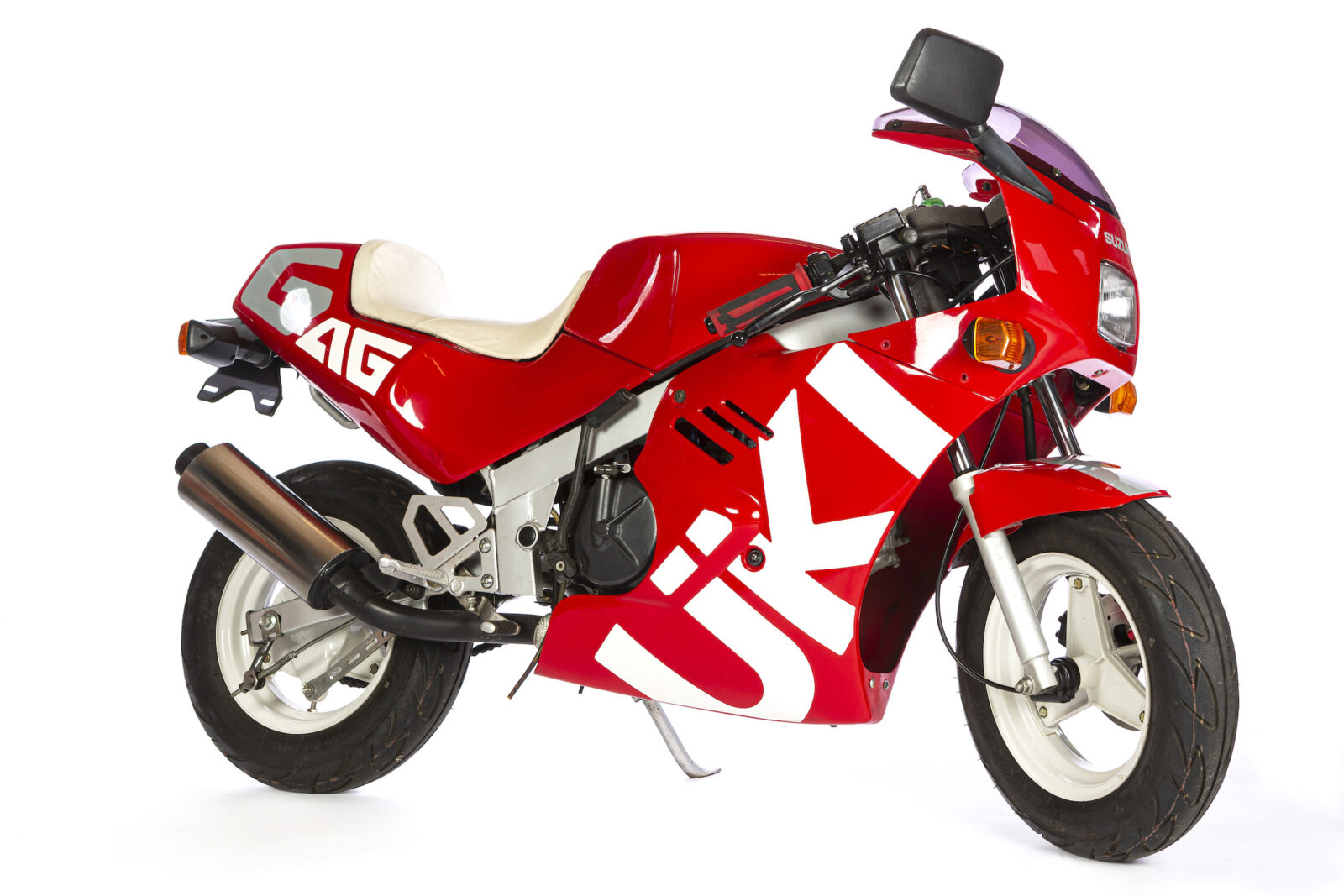 This is the Suzuki RB50 GAG, a much loved minibike better known by its “Mini Gixxer” nickname, a reference to the fact it’s essentially a miniature version of the full-sized Suzuki GSX-R superbike.

Suzuki introduced the RB50 GAG in 1986 and it was discontinued after 1987, it’s not known exactly how many were built but we do know that they’re exceedingly rare and highly sought after by collectors and enthusiasts.

Unlike its competitors such as the Honda Monkey, the RB50 GAG was designed to more closely replicate the full-size motorcycles in the Suzuki line-up. Rather than using the far more common (and cheaper) tubular steel to make the frame, Suzuki engineers developed a bespoke welded aluminum box frame and a “full-floater” aluminum box-type swingarm, a hydraulic disc brake up front, telescopic forks, clip-on handlebars, and a monoshock rear. 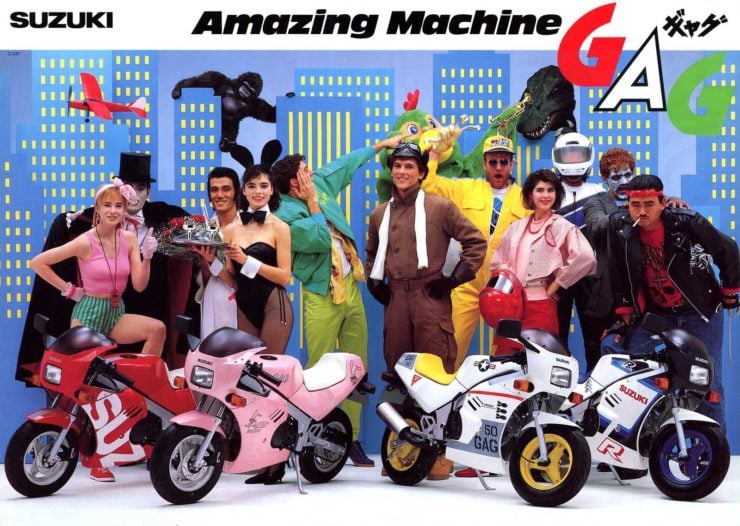 Above Image: A period advertisement for the Suzuki RB50 GAG showing all four livery options.

The engine used was a four-stroke unit sourced from the Birdie Scooterette, it’s an air-cooled, 49cc single-cylinder unit that produces 5.2 bhp at 7,000 rpm and sends power to the rear wheel via a four-speed gearbox. Although this is clearly not an astonishing amount of power, it’s more than adequate for a minibike that tips the scales at just 64 kgs (141 lbs).

The design of the fuel tank, seat/cowl, and fairing were all closely based on the full-scale Suzuki GSX-R, and Suzuki offered the model in four distinct paint schemes including the classic blue and white, a pink version, the popular red and white (shown here), and a USAF version which was possibly inspired by Top Gun, which had been released in 1986 – the same year as the RB50 GAG.

The RB50 GAG was also known as the GSX-R50 in the United Kingdom and some other world markets (and it was arguably a better name), but the motoring press and the bike’s owners nicknamed it the Mini Gixxer, which is how most people refer to the model today.

Although small the RB50 GAG was entirely road-legal in most countries, it came fitted with all the required lights and fenders for full road use, and due to the sub-50cc engine size it could be licensed and insured as a moped. 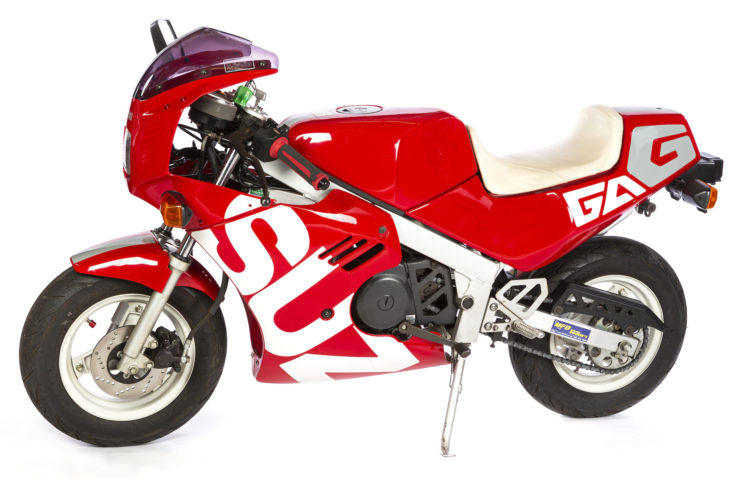 Despite the fact that the RB50 GAG was a good-looking and affordable mini-superbike its sale figures were a bit of a disappointment for Suzuki and as a result they only sold it for two years. This didn’t stop an entire cottage industry popping up to supply aftermarket performance parts for the model, though sadly this industry was also short-lived and those who want performance parts today need to rely on sleuthing and patience.

The Mini Gixxer you see here is an 1986 model with the popular red and white paint scheme. The bike has just 2,283 kilometres on the odometer (1,418 miles) and it’s in remarkably original condition throughout.

Bonhams are estimating that it’ll sell for between $5,900 and $7,100 USD (€5,000 to €6,000) and it’s being offered with no reserve at the Zoute Sale on the 11th of October in Belgium, with internet bidders welcome. If you’d like to read more about it or register to bid you can click here to see the listing. 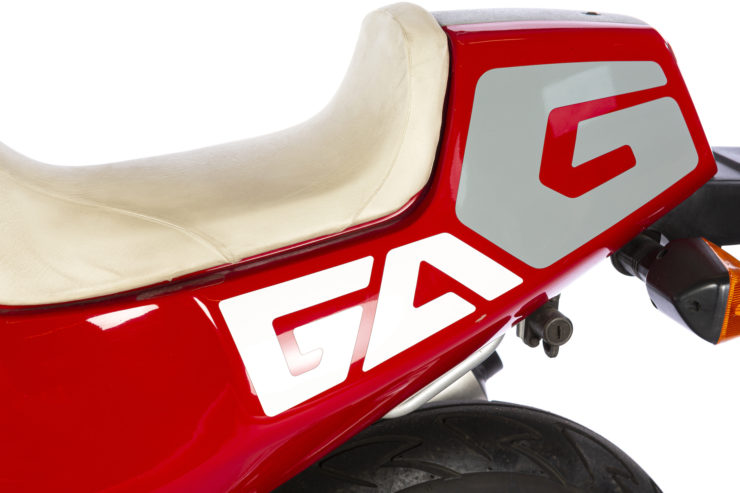 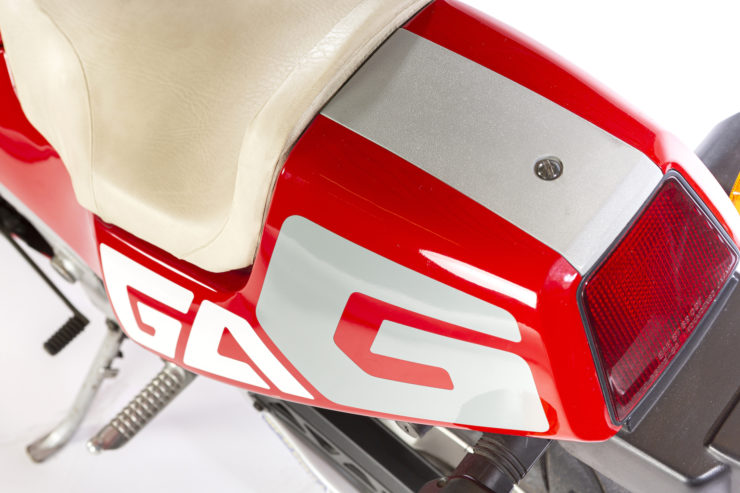 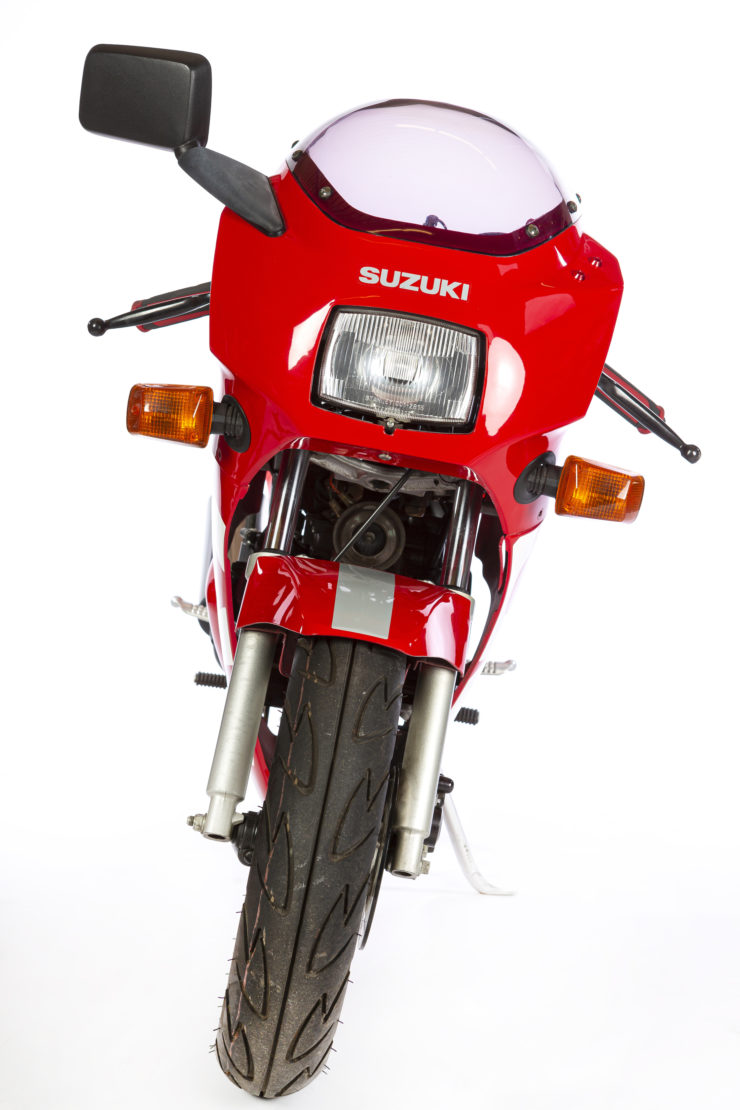