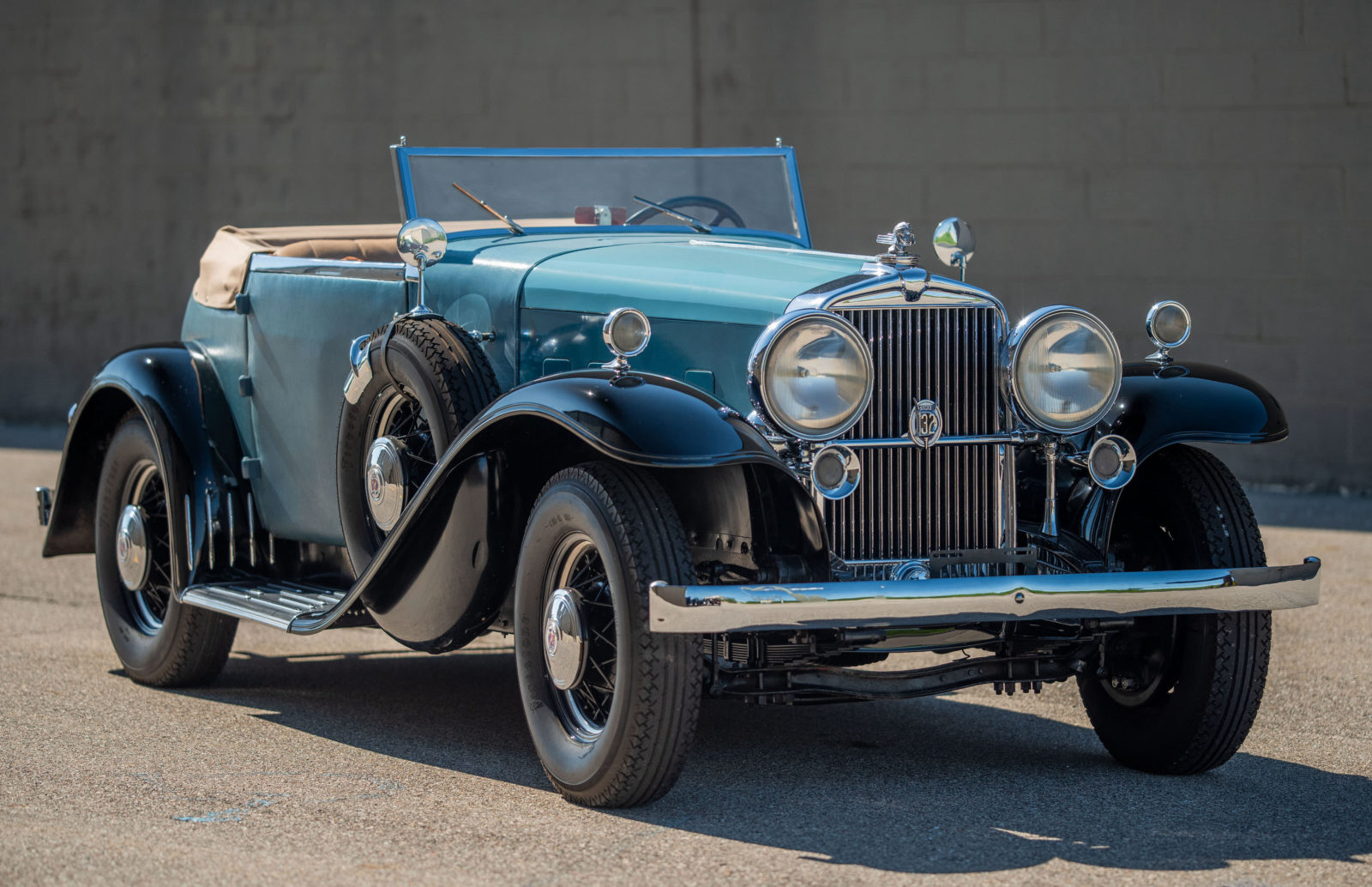 It’s believed that approximately 20 examples of the Stutz DV-32 Super Bearcat were built in the early 1930s. They were among the fastest cars money could buy, supercars in every sense of the word, with power provided by an engine that almost won at Le Mans in 1932.

The example you see here is one of the rarer Weymann-bodied examples. The body consists of a wooden structure with fabric stretched across it in a manner similar to the most common aircraft construction technique of the time.

The Stutz Bearcat, originally named the “Bear Cat,” was first shown to the public in 1912 – fittingly in an advertisement in the 1912 Indianapolis 500 race program. A year earlier in 1911 a Stutz had achieved an 11th place finish in the 500 mile race, a remarkable achievement given that the car had been built in just five weeks. 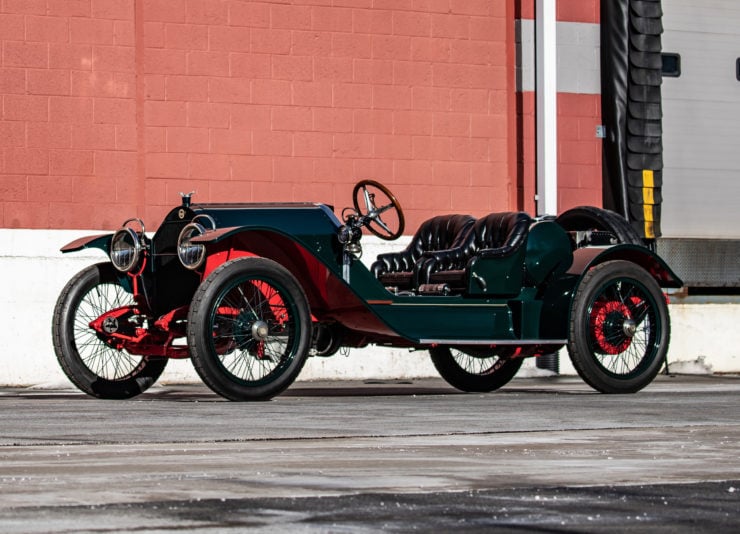 This is an original 1913 Stutz Bearcat, just the second year of production for the model.

Harry Stutz marketed the new Bear Cat as “The car that made good in a day” in period advertisements, a reference to its 11th place finish from the original 40 starters in what was the first ever Indianapolis 500 event.

The production version of the Bear Cat, later renamed the Bearcat, was as close to the race car as they could reasonably get it. It did have additional parts like fenders, headlights, and a windshield added but otherwise it was a race car you could drive on the road.

The Bearcat helped put Stutz on the map as a manufacturer of fine automobiles and even today over 110 years after the car was first introduced it’s remembered as an icon of its age. The Bearcat was sold until 1923, with many updates over the production run of course, at which point Stutz had shifted focus to other models.

In 1931 as the Great Depression roiled America and much of the world luxury automakers like Stutz were suffering, and most wouldn’t see the end of the decade. 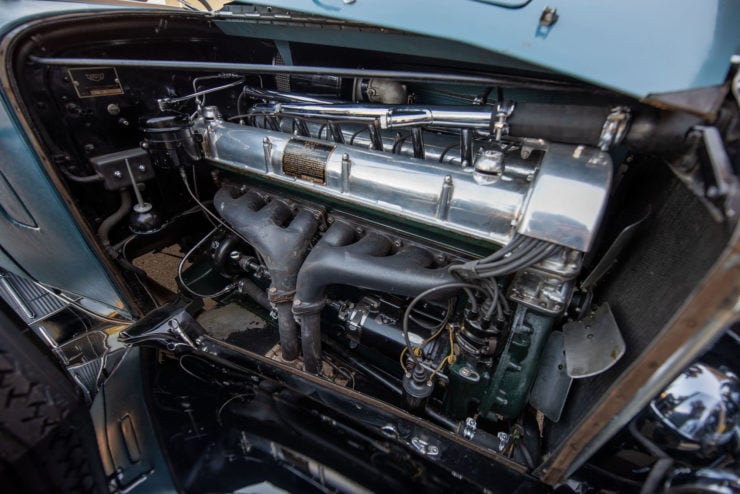 This is the DV-32 engine, it’s a remarkably futuristic design with a crossflow head featuring double overhead cams and four valves per cylinder. It produces 156 bhp and 300 lb ft of torque.

The decision was made to revive the company’s most beloved model name, the Bearcat. The car would be completely new of course and not share any parts with its predecessor, in order to ensure that it was technologically advanced enough to be a true competitor.

The new Bearcat was fitted with the company’s sophisticated DV-32 “Dual Valve 32” inline-eight cylinder cross-flow engine with double overhead cams and four valves per cylinder – an unusual specification for a road going engine at the time, most engines were still using pushrods and two valves per cylinder for decades to come.

The fastest version of the new Bearcat was the suitably named the Super Bearcat, it was fitted with a much shorter (and therefore lighter) 116 inch chassis and a low-slung body for a lower center of gravity. With its lower weight and its DV-32 engine producing 156 bhp and 300 ft lbs of torque, the Super Bearcat was able to reach speeds in excess of 100 mph – an astonishing rate of speed for the era. 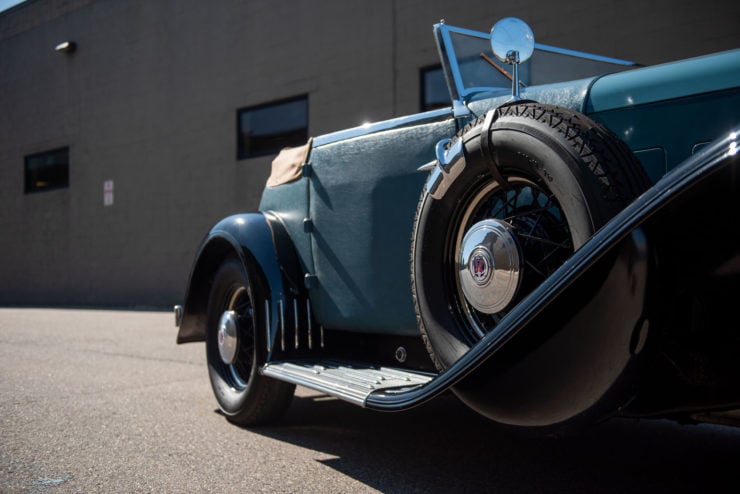 In this image you can see the texture of the fabric used for the body. The Weymann body uses the aircraft-like technique of stretching fabric over a wooden frame.

Sadly due to the economic crisis very few were sold, it’s thought just 20 or so in total. The Super Bearcats were fitted with either traditional aluminum bodies or patented Weymann bodies which were even lighter still.

“Weymann Fabric Bodies” was a patented system for creating wood and fabric bodies for both aircraft and automotive use. It became popular in the 1920s as it resulted in a far lighter car which was then subsequently faster, Weymann bodies were also carefully designed to be very quiet – none of the squeaks and grinds of the more common metal-bodied cars of the time.

The Super Bearcat would leave production in 1933 and the company wouldn’t make it to the 1940s, succumbing to bankruptcy in 1939. There have been a few attempts to revive the marque over the years, and there are rumors now that the name will be brought back for a new line of electric vehicles, one of which will almost certainly be called the Bearcat.

The 1932 Super Bearcat you see here is one of just two surviving examples with a fabric body, and one of eight Super Bearcat survivors in total. 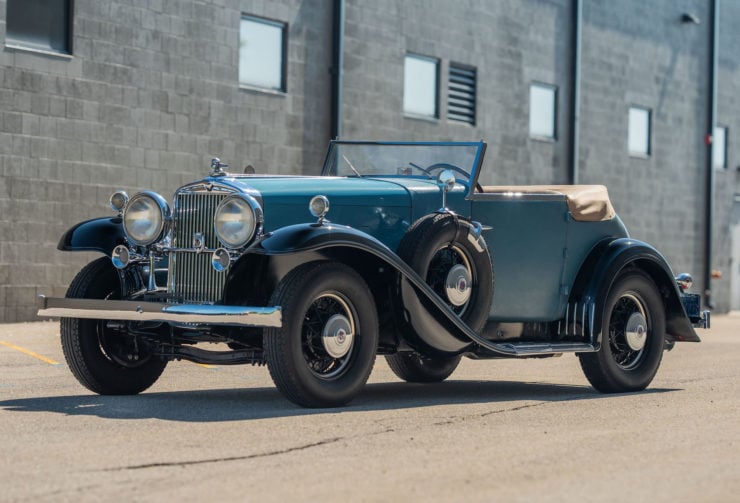 The Super Bearcat is a handsome short wheelbase car with styling that may have been influenced by the Mercedes-Benz SSK.

This car has a fascinating history, as most Bearcats do, its ownership history has been traced back to 1952 when it was owned by Colonel Donald L. Bower, then stationed at Wright-Patterson Air Force Base in Dayton, Ohio.

In his ownership Colonel Bowers is said to have given his Stutz a full mechanical rebuild and he had repainted the hood, fenders, and wheels. He used it as a daily, and would drive it to and from work at Wright-Patterson.

Later in the car’s life it was owned by Dr. Frederick Simeone, a major figure in American car collecting. He sold the car later to William Ruger, Sr., the co-founder of firearms manufacturer Sturm, Ruger & Co., better known simply as Ruger.

This Super Bearcat is now due to roll across the auction block with RM Sotheby’s later in August with a price guide of $1,000,000 – $1,300,000 USD. If you’d like to read more about it or register to bid you can visit the listing here. 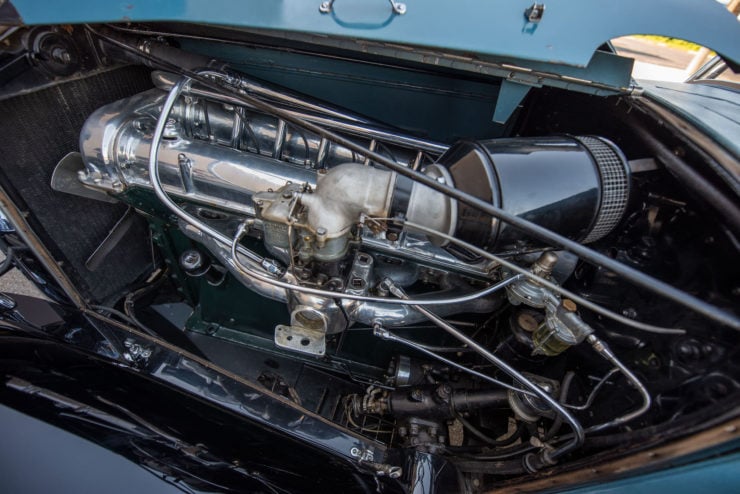 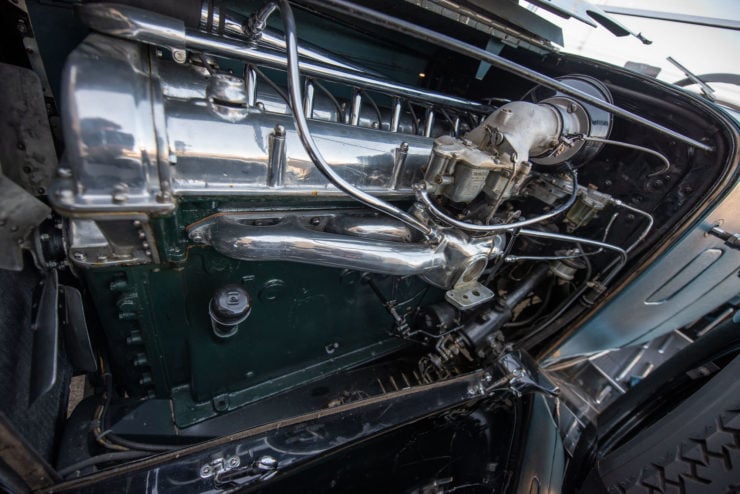 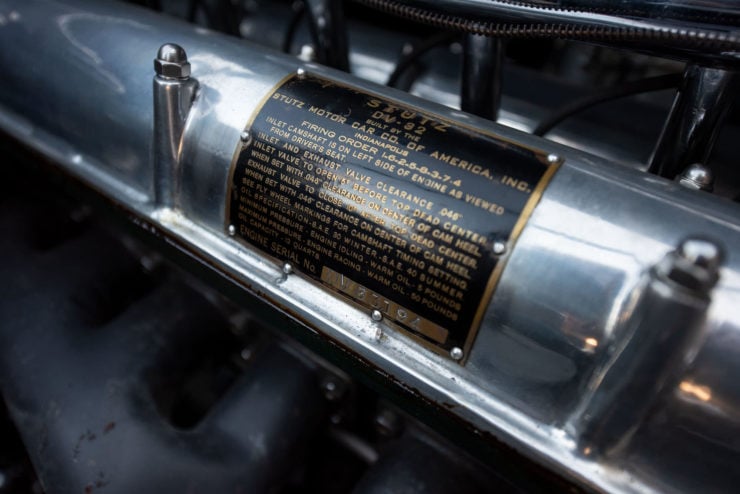 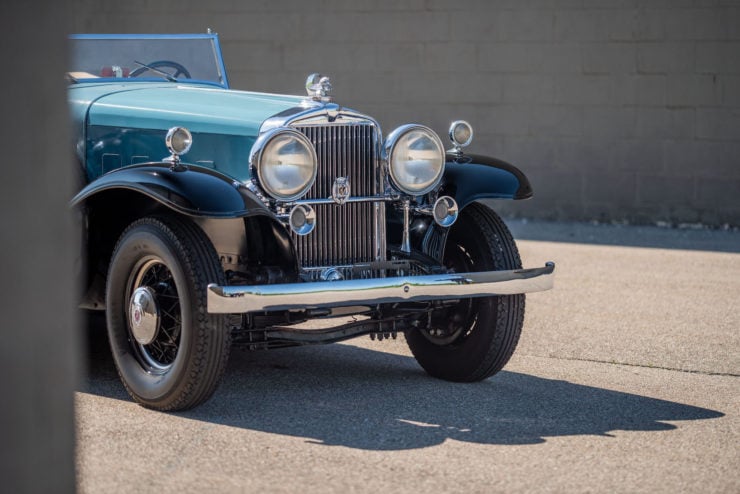 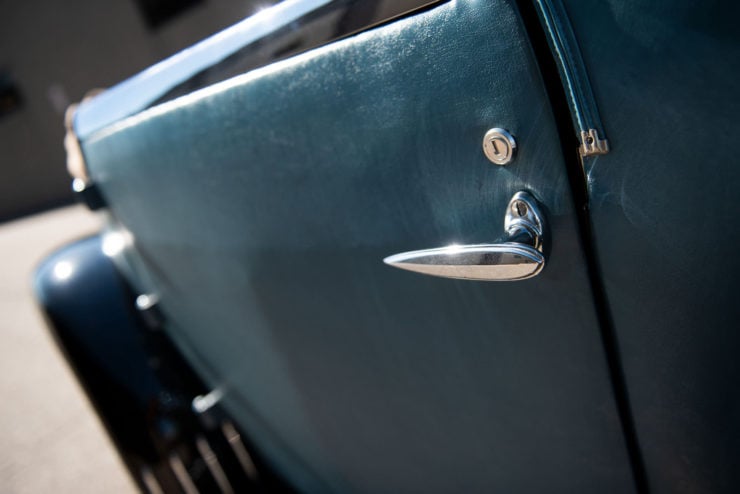 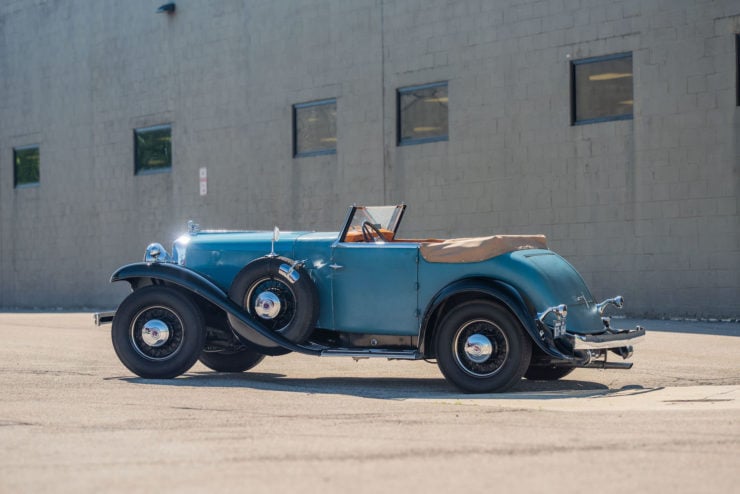 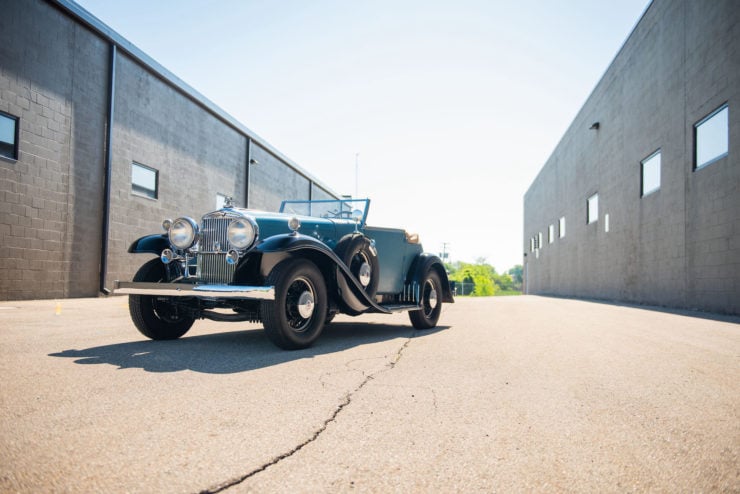 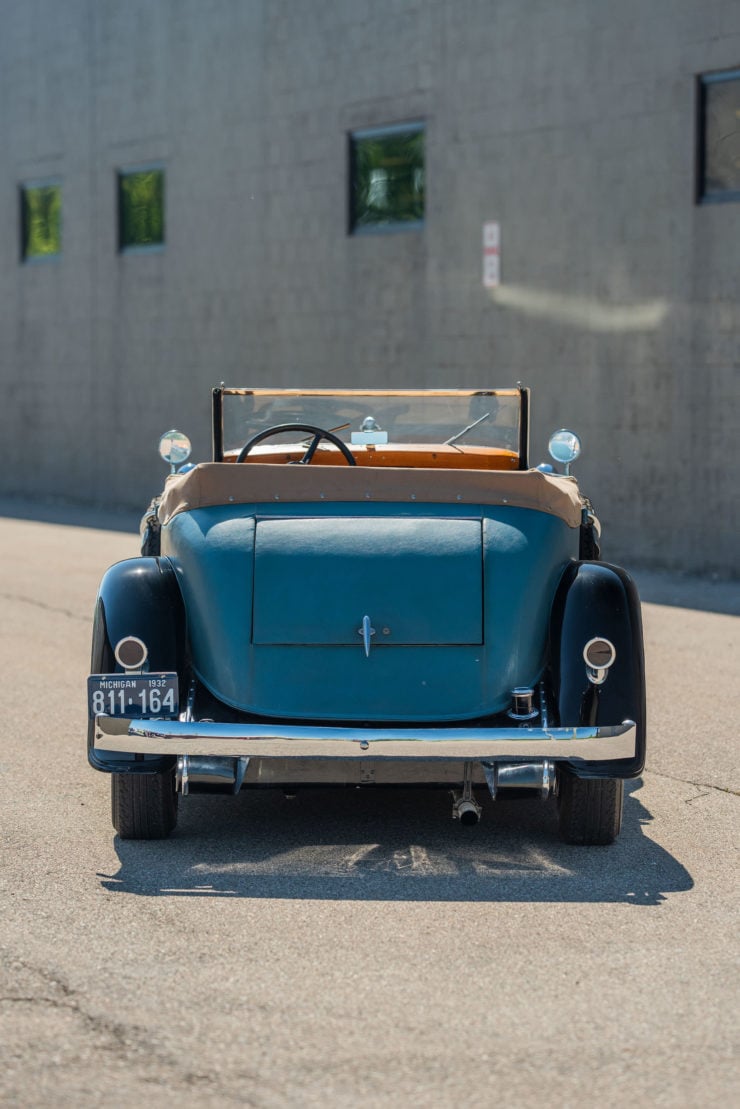 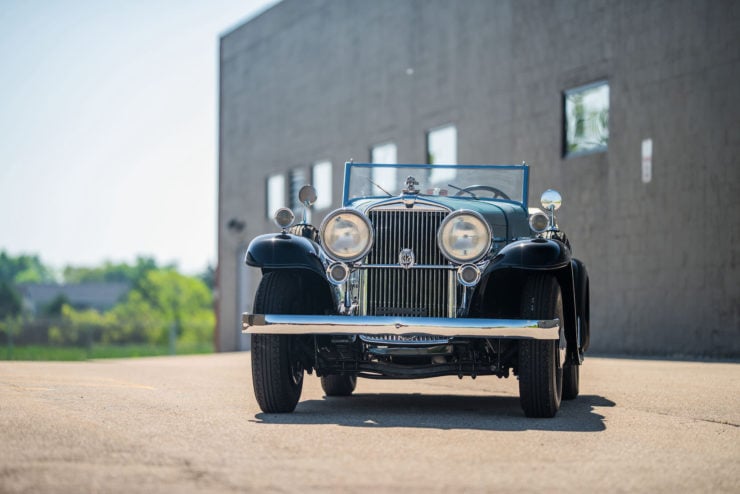 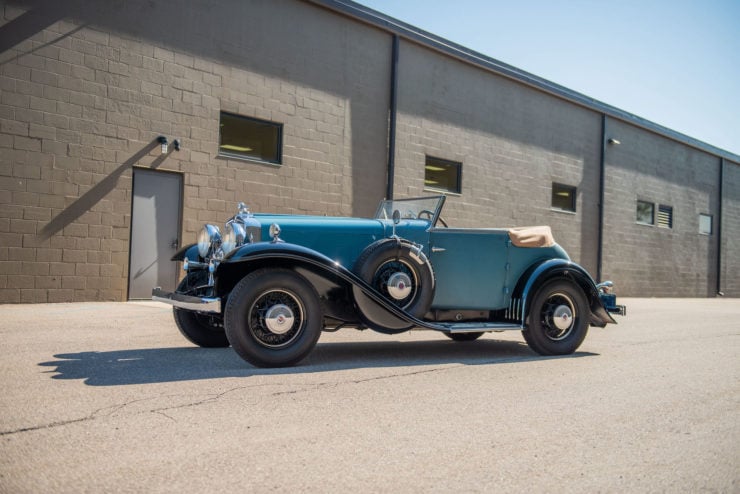 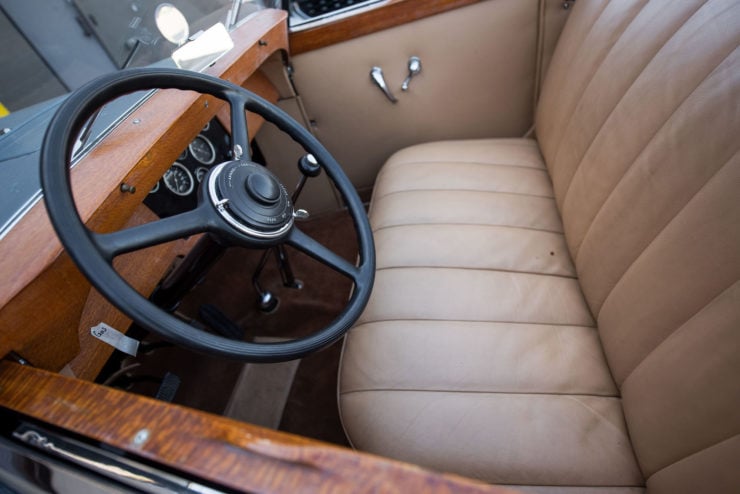 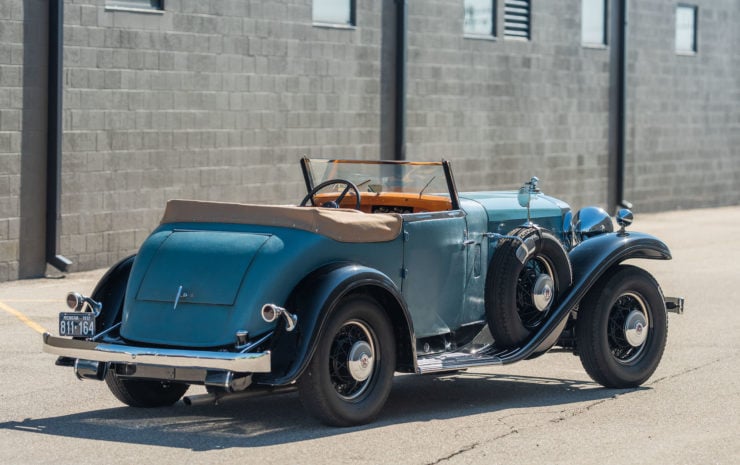