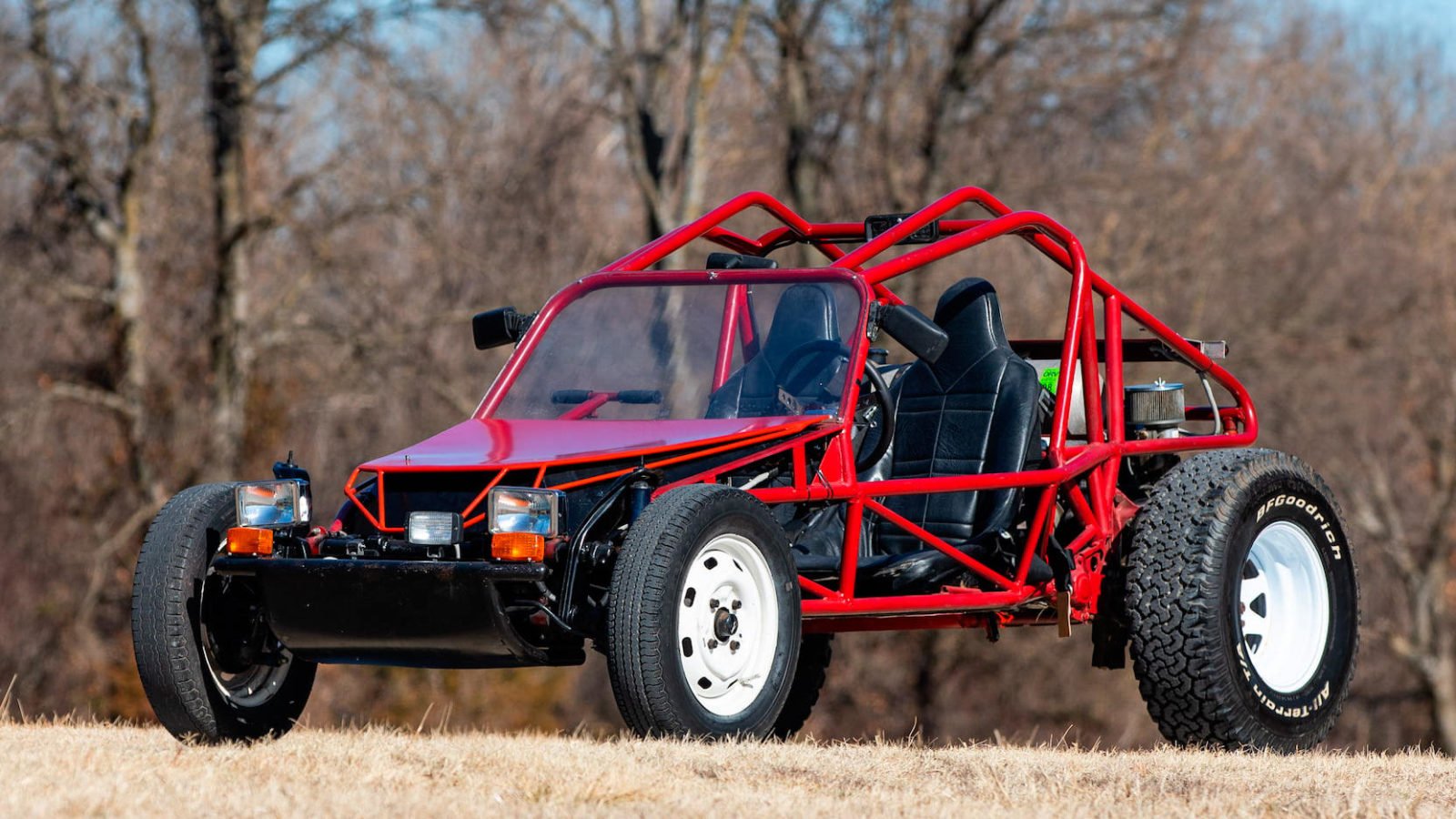 As Sand Rails first began to appear in the 1960s, they represented the second major evolutionary step for off-road buggies after the more primitive creations that had started appearing on American dunes in the years after WWII.

The fundamental architecture of a sand rail typically consists of a tubular steel chassis that includes integral roll over protection. They rarely have much in the way of body panels, and they’re typically powered by a rear-mounted engine – often from a VW Beetle.

The VW Beetle And The Unstoppable Beach Buggies

The explosion in the popularity of beach buggies that occurred after WWII has been largely attributed to returning servicemen who had grown fond of driving off-road in Jeeps, tanks, trucks, and half-tracks during the war. 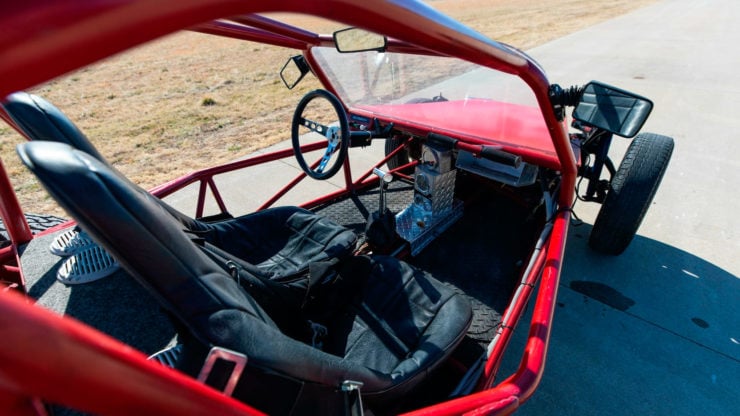 Sand rails typically have two bucket seats with harnesses to keep the occupants safely seated even when doing jumps and other high speed maneuvers.

Initially many people used military surplus Jeeps and other modified road cars but it wasn’t long before it was discovered that the VW Beetle was the perfect, albeit unlikely, donor car for sand and beach driving.

Early pioneers like Pete Beiring took the VW Beetle floorpan and shorten it a few inches, then add a simple body. The all independent suspension, reliable drivetrain, and rear weight bias was perfect for driving in deep sand.

These Beetle-based vehicles became known as “Buggies” after the fact that the Beetle was known as the “Bug.”

In the 1960s Bruce Meyers developed the legendary Meyers Manx, he took a shortened Beetle pan and added a new fiberglass body over the top that allowed for off-road tires to be fitted.

The Meyers Manx became the de facto “Beach Buggy” and it’s been copied by countless companies over the intervening years. 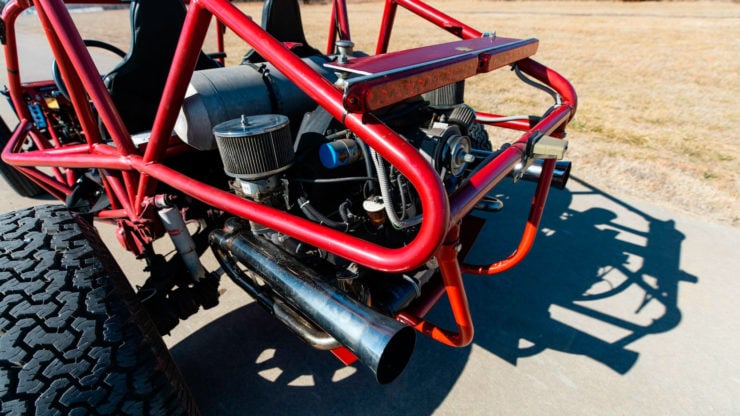 This rail is powered by a VW Beetle flat-four engine, these simple air-cooled motors have made up the backbone of the beach buggy and sand rail community since the 1950s.

Interestingly you can still buy a Meyers Manx kit today and build your own road-legal beach buggy at home.

The Arrival Of The Sand Rails

As the 1960s progressed the engineering that went into buggies became more and more complex. Soon people were building vehicles with tubular steel space frames that had integrated roll cages, the wheelbases were lengthened, and many VW Beetle parts were used including the rear-mounted engine.

The use of a rear-mounted engine was seen as ideal as it kept the weight over the driven rear wheels for better traction, and it kept the front tires light so they could almost float over the sand.

Before long many sand dunes were inundated with sand rails of all shapes and sizes, companies appeared selling frames and full build-it-yourself kits, and people started experimenting with more powerful engines and long travel suspension. 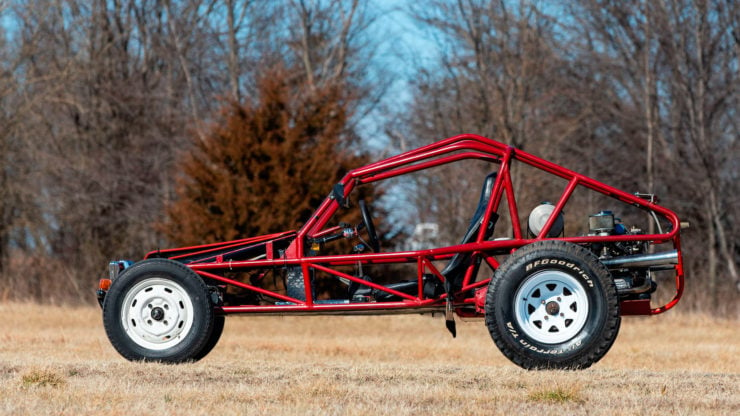 Having the engine in the back over the driven wheels gives optimal traction, it also helps keep the front wheels unencumbered so they float over the sand without digging in or bogging down.

Sand rails are now one of the most popular self-built, off-road vehicle types in the country and it’s possible to pick up good secondhand examples if you don’t have the space, time, or inclination to do it yourself.

The Sand Rail you see here is documented as a 1967 model which would put its arrival close to the beginning of the sand rail revolution.

Power is provided by a 1.5 liter (1,493cc) flat-four VW Beetle engine fitted with dual carburetors. Power is sent to the rear wheels via a 4-speed manual transmission and a Scat shifter. The frame is finished in red and it has a black interior, with a galvanized checkerplate center console and flooring.

The vehicle has an integrated roll cage for safety as well as bucket seats, and it’s riding on steel wheels fitted with BF Goodrich All-Terrain T/A tires.

This sand rail is due to cross the auction block with Mecum at the end of March, it’s being offered with no reserve and you can click here if you’d like to read more about it or register to bid. 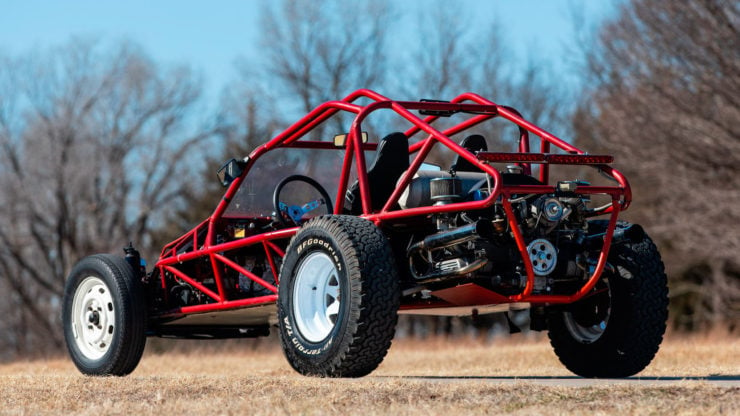 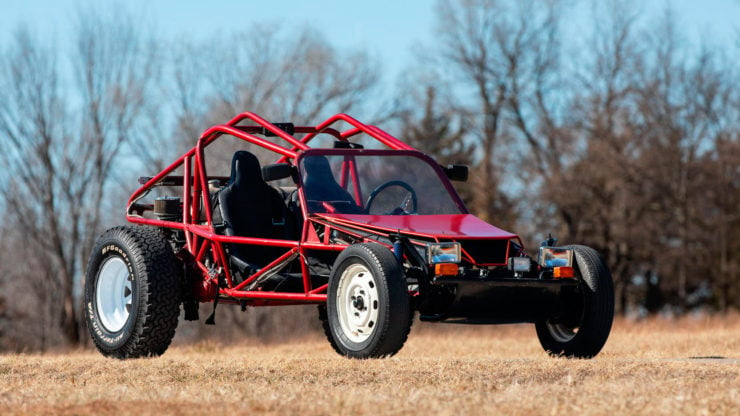 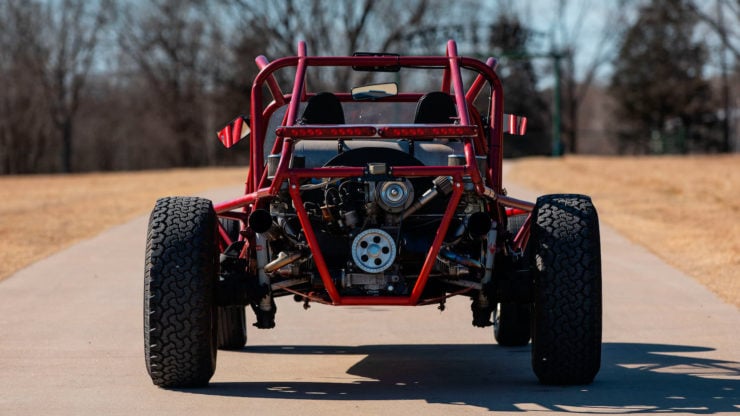 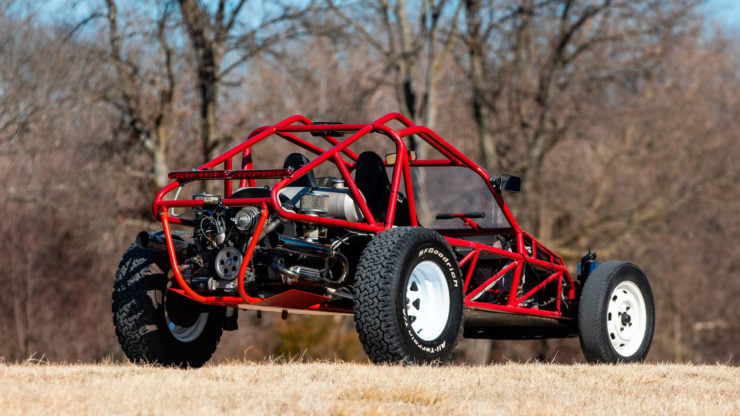 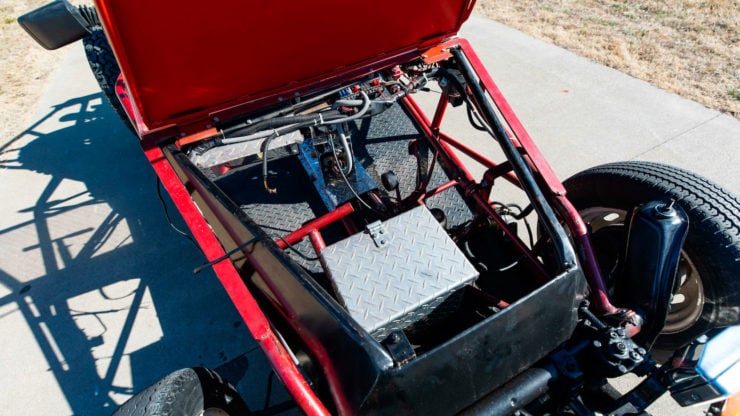 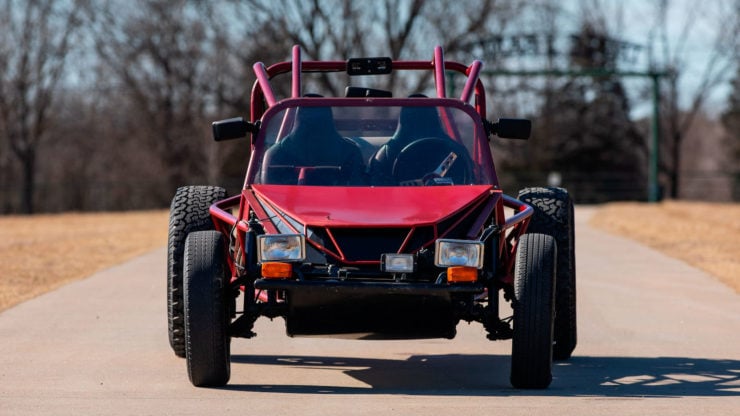 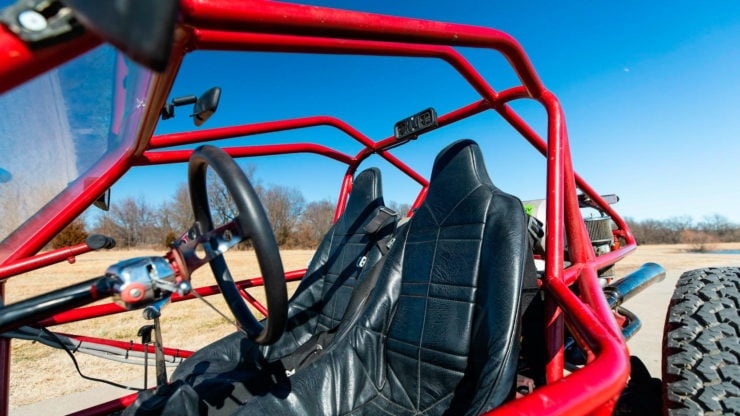 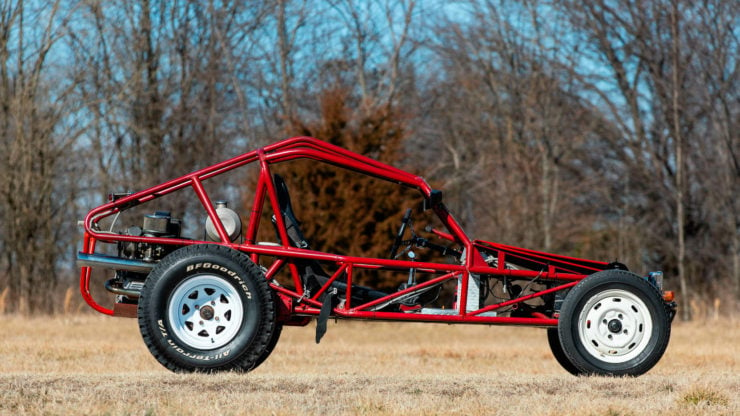 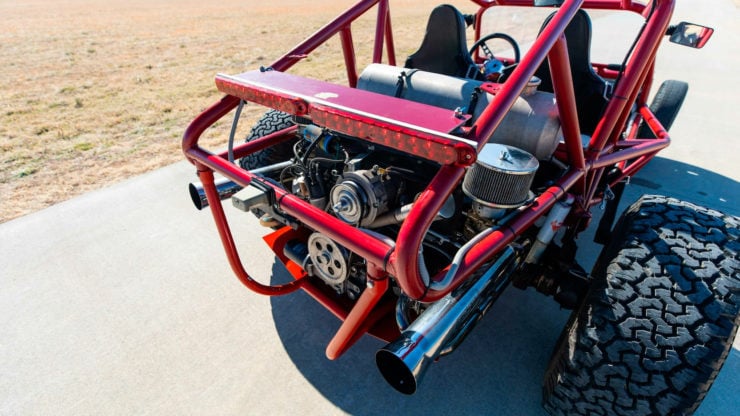 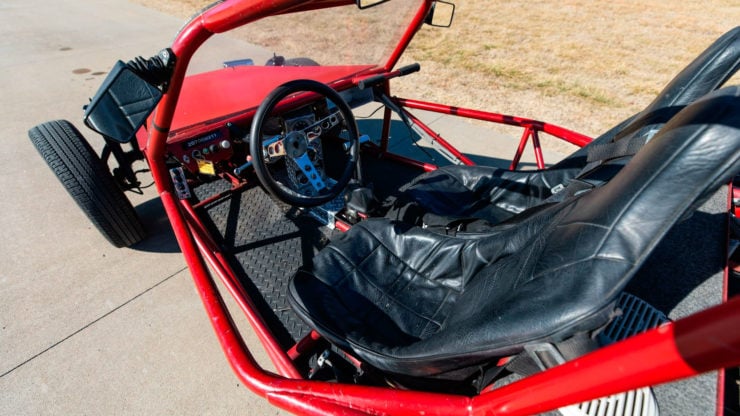