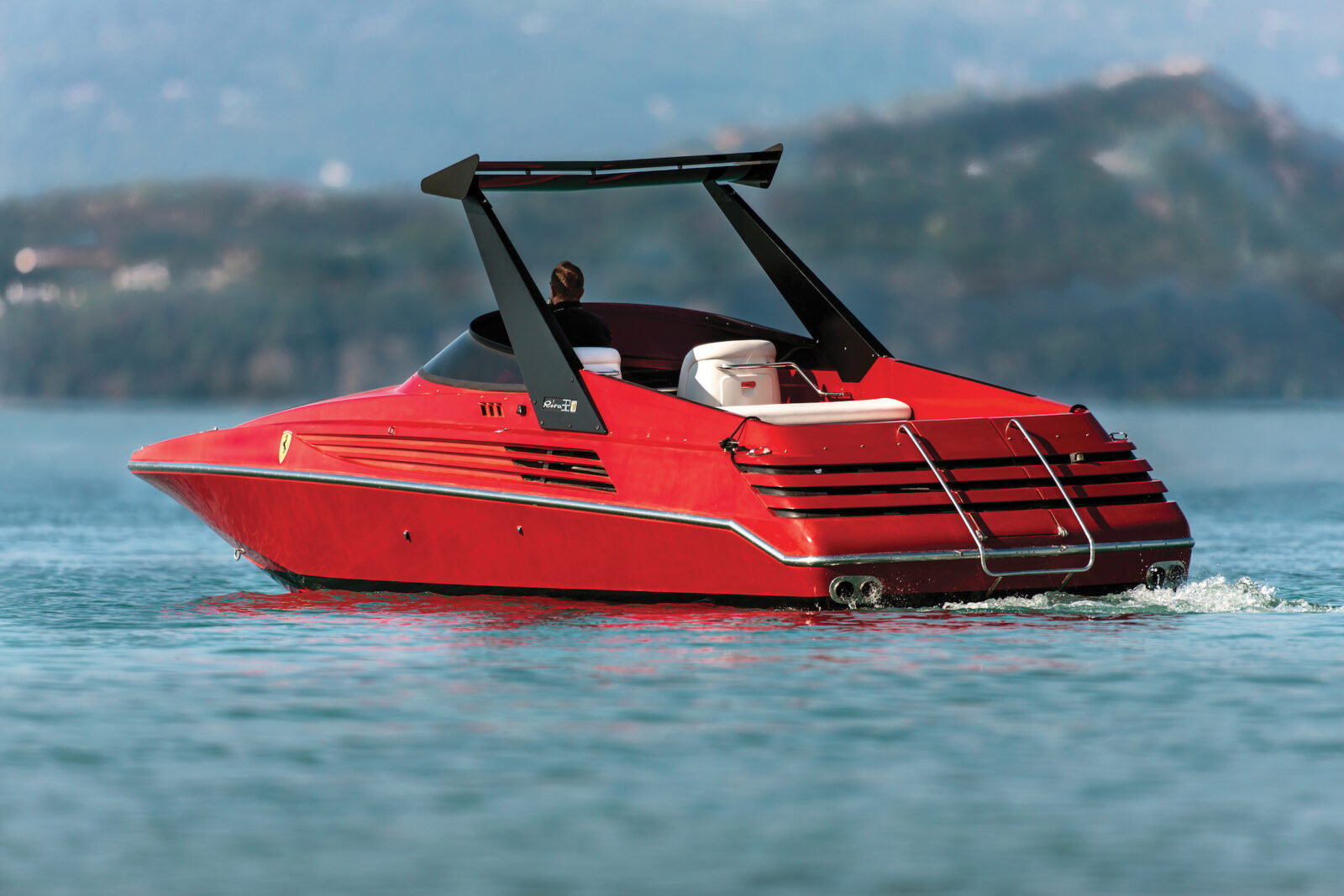 The Riva Ferrari 32 was jointly developed by the two Italian companies in the late 1980s as a water-borne equivalent to the Ferrari Testarossa.

The boat has the famous side strakes of the iconic ’80s supercar as well as a similar tail end, prominent Ferrari badging, and the bright red Rosso Corsa paintwork we all associate with the Italian automaker. Just to cap it off a Formula 1-style carbon fibre spoiler was installed overhead.

The project to build the Riva Ferrari 32 was co-conceived by Gino Gervasoni, Chairman of Cantieri Riva, and Enzo Ferrari. The basic outline of the plan was to create a Ferrari for the sea, with a hefty dose of Riva heritage for good measure. 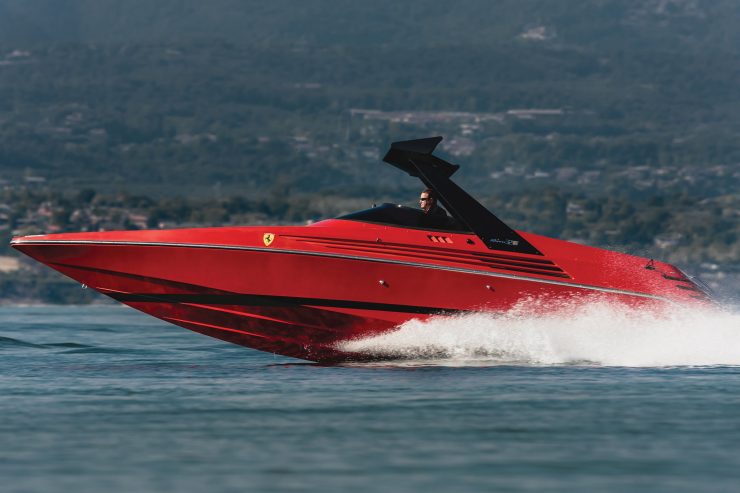 A Great Storm and a Miracle from Pietro Riva

The Riva boatyard was established in 1842 on the shores of Lake Iseo, in Sarnico-Italy. A devastating storm had severely damaged many of the local fisherman’s boats but a young shipbuilder and craftsman from Laglio, came to the rescue.

His name was Pietro Riva, and he performed what many considered a miracle by rebuilding and repairing many of these damaged vessels – saving the town’s economy and winning the hearts of the locals.

In the years since, Riva has grown to become one of the world’s pre-eminent luxury boat builders, and the Riva Aquarama is considered by many to be the single greatest wooden powerboat in the world. 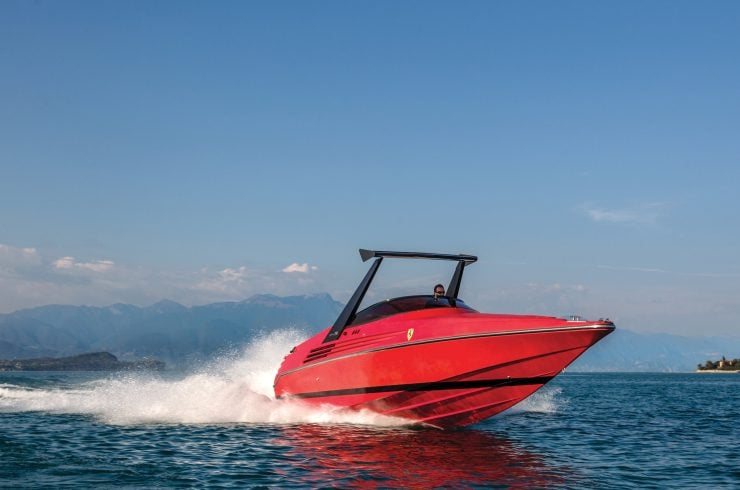 The Riva Ferrari 32 and it’s strong Testarossa design influences would be the first collaboration between the two high-end Italian companies. The then-new Ferrari computer aided design (CAD) team worked closely with the engineers and designers at Riva to develop a new vessel worthy of wearing both the Riva and Ferrari badges.

Power for the new boat was provided by twin 390 hp, 7,982cc BPM Vulcano 400 V8 engines – there’s no official record of fuel consumption figures, presumably because that’s not the sort of thing you need to worry about if you can afford one in the first place. 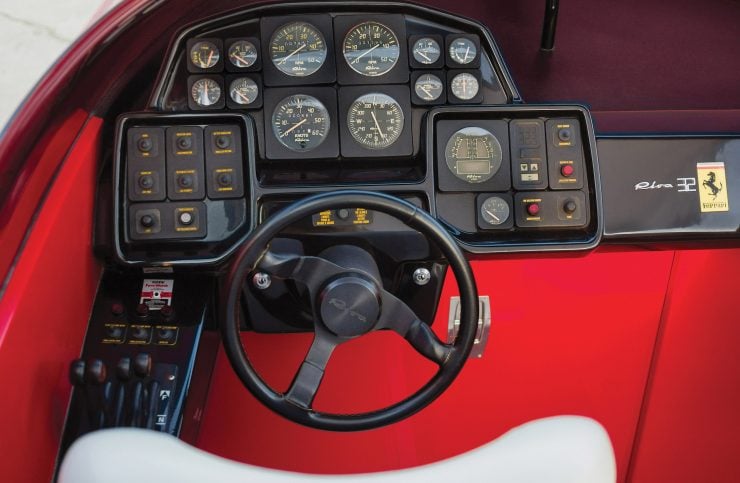 Below decks there’s a double bed for overnight stays or afternoon naps, an overhead hatch, stowage spaces, some counter space, and a concealed marine toilet. Above decks theres plush white seating and a well-appointed cockpit with ample instrumentation, individual engine controls, waterproof switchgear, a depth sounder, tachometers for each engine, and a speedometer.

As you would expect, a sound system was installed, made up of  a Clarion AM/FM/CD player with dashboard-mounted controls, and it plays music through Polyplaner 80W speakers.

Just 40 examples of the Riva Ferrari 32 were built, making it a far rarer acquisition than its land-based sibling the Testarossa. The example you see here has just had an engine-out service completed in 2015 and it’s presented in excellent condition.

RM Sotheby’s estimate it’ll fetch $90,000 to $120,000 USD when it crosses the auction block in late March in Fort Lauderdale. If you’d like to read more about it or register to bid you can click here to visit the listing. 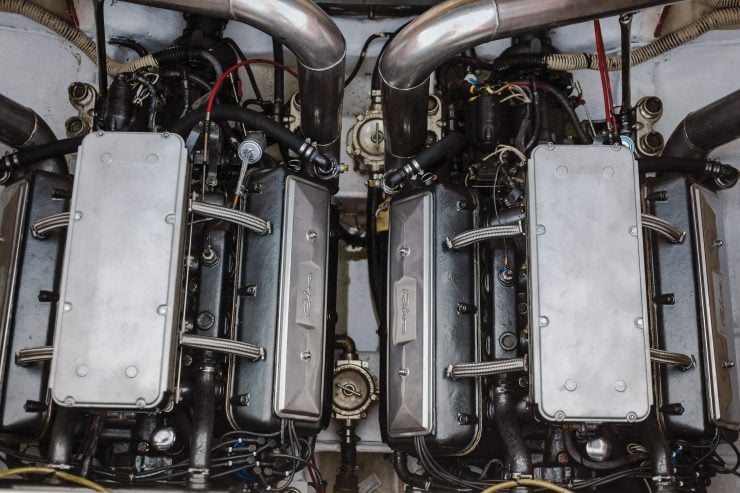 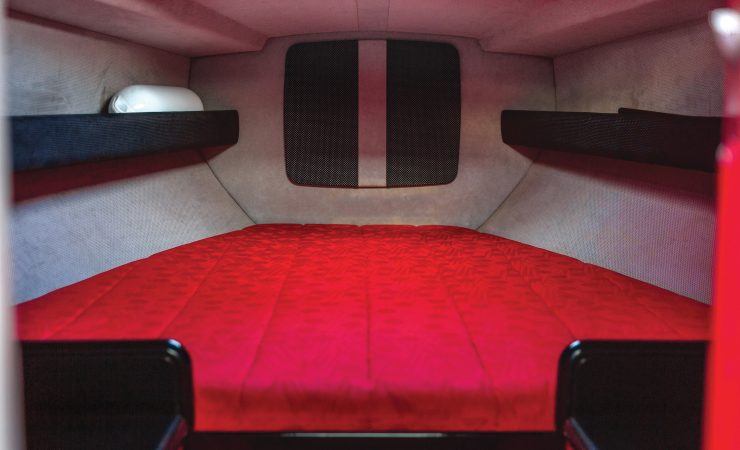 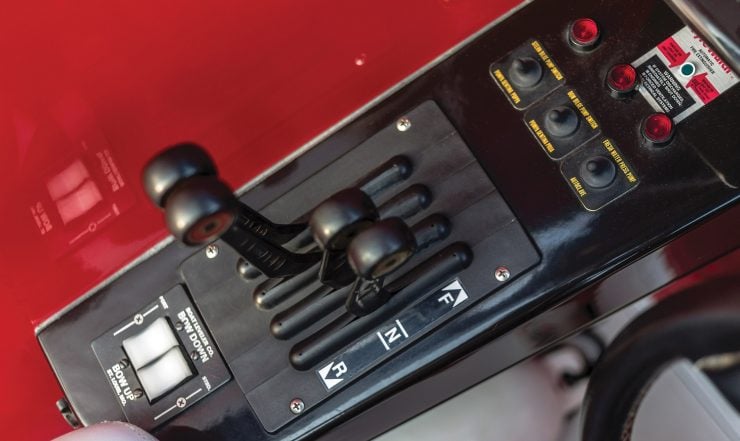 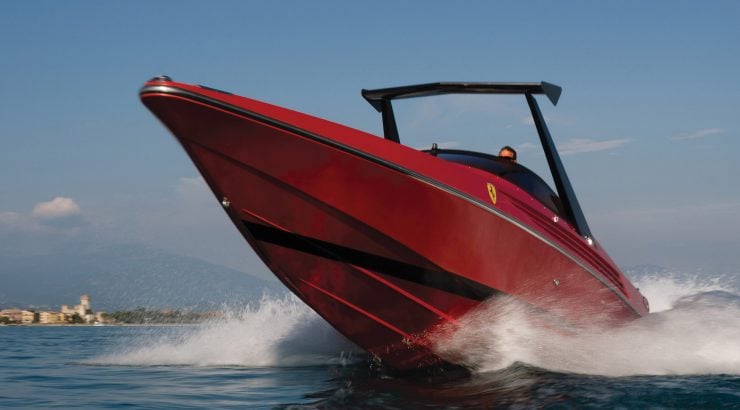 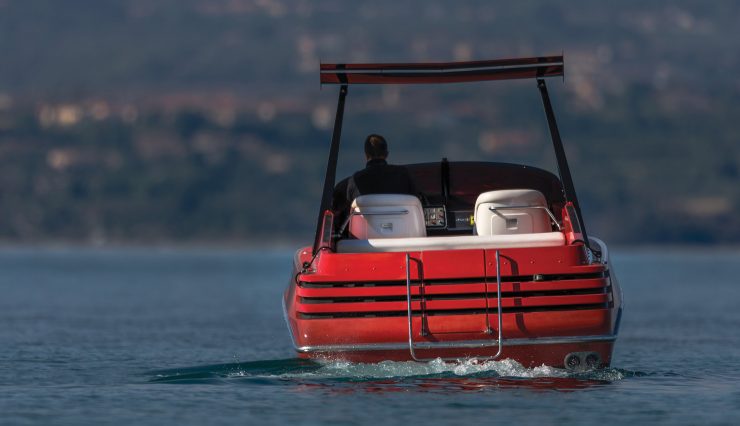 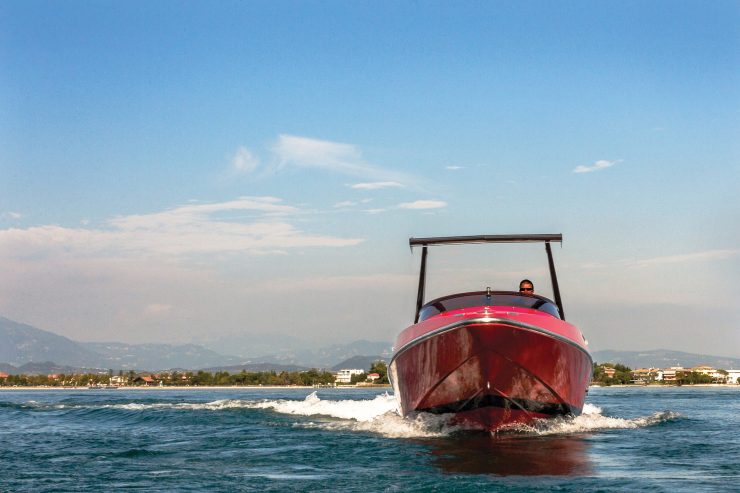 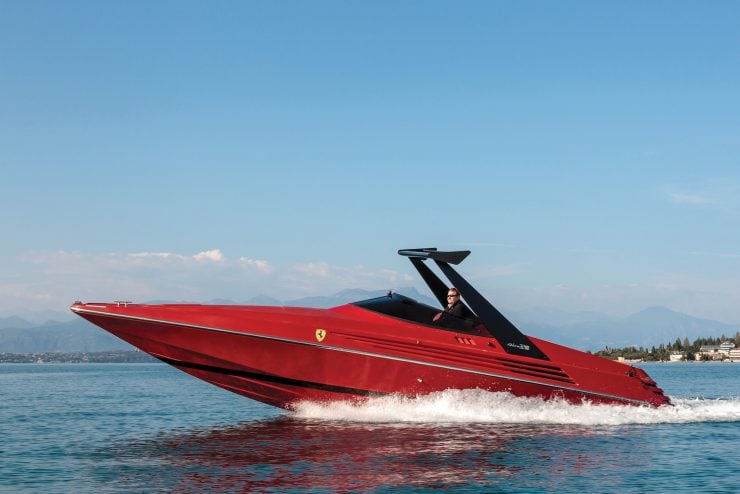 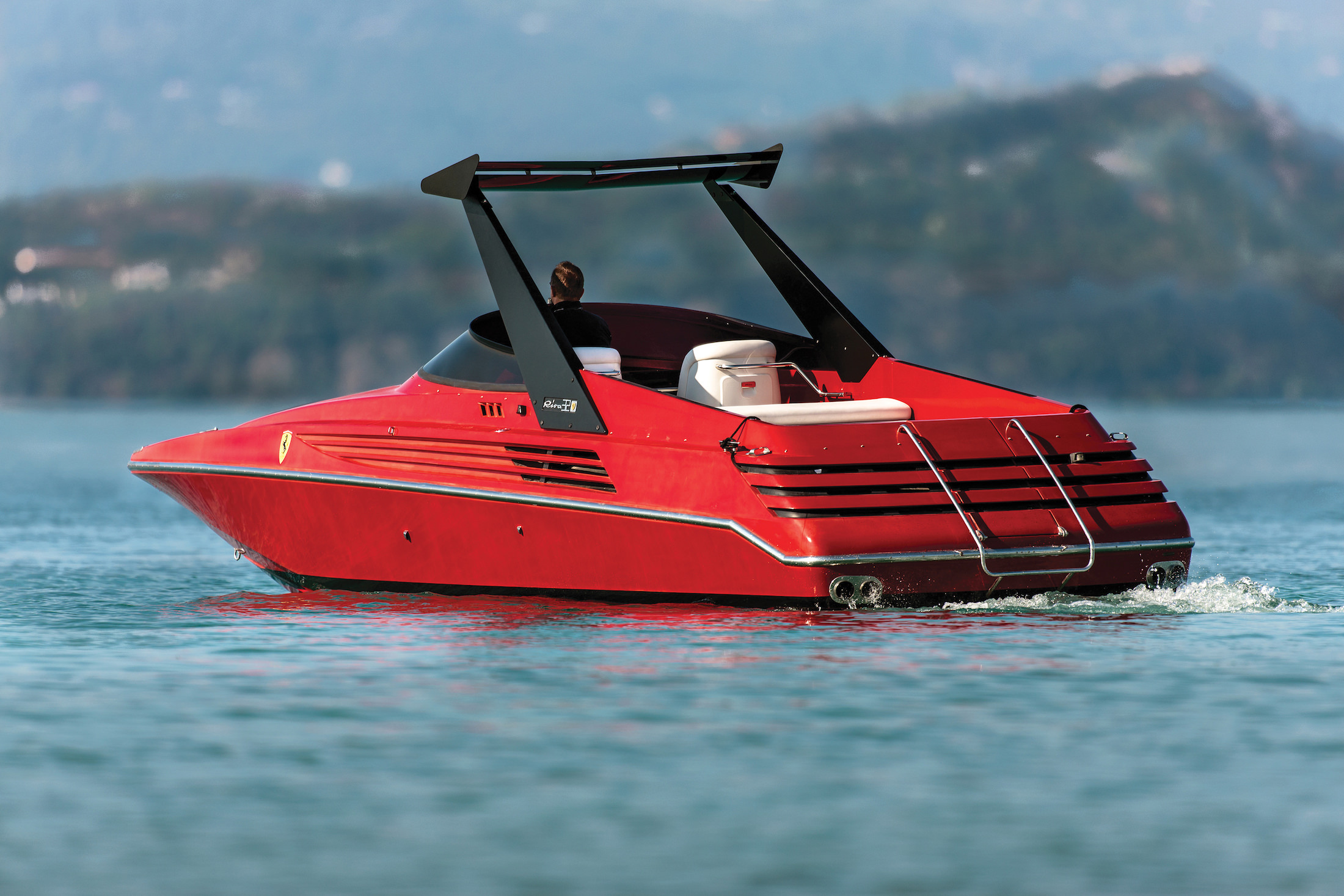