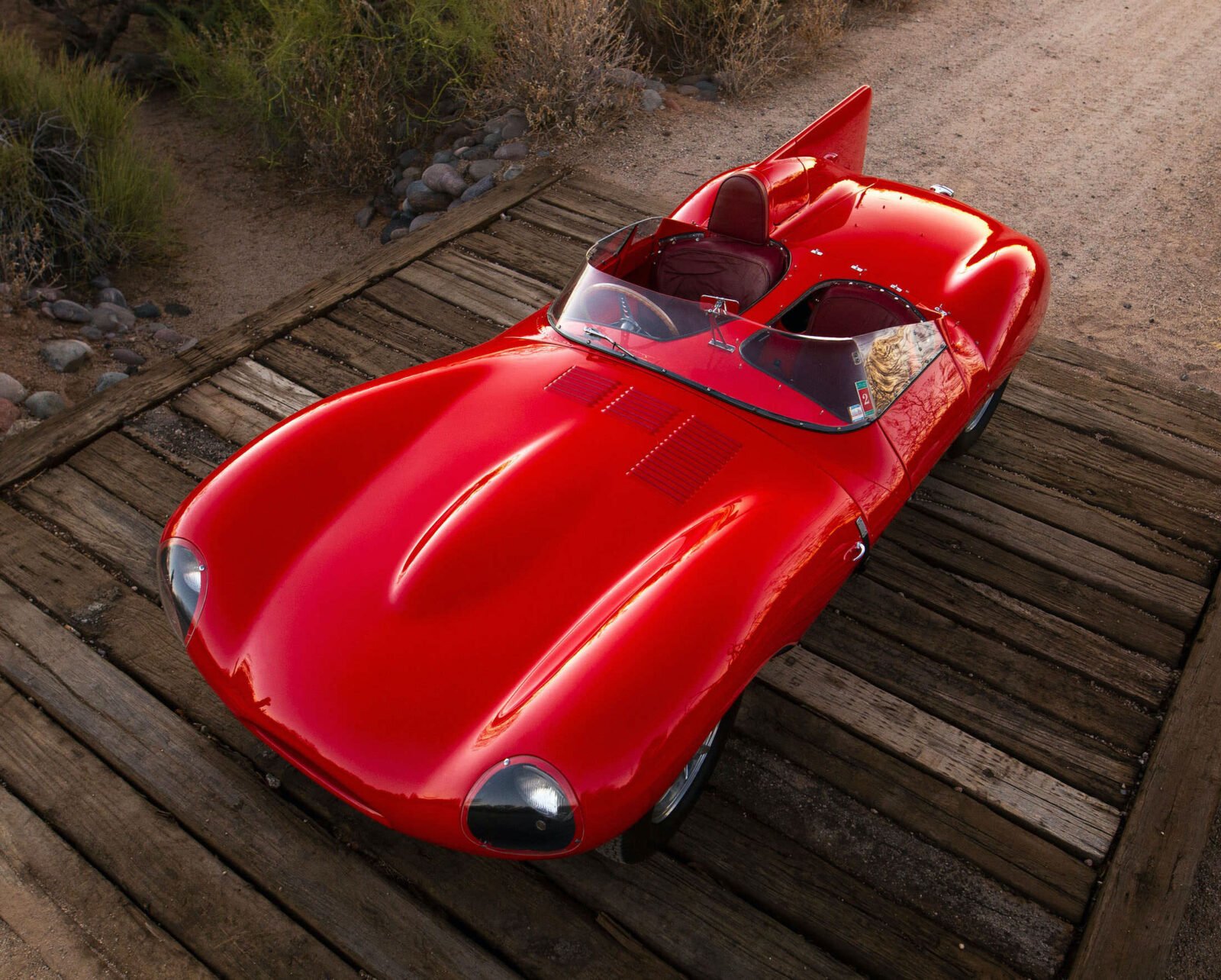 The Jaguar D-Type is perhaps most notable for the fact that it was a car designed using some cutting edge aircraft technology (in the 1950s) that would defeat all who came before it at Le Mans and forever change the way racing cars were built.

The two men responsible for the D-Type were aerodynamicist Malcolm Sayer and engineer William Heynes. Working with a small team they incorporated modern aerodynamic theory into the C-Type, D-Type, E-Type, and XJ13.

From a racing perspective the most famous of these cars is of course the D-Type thanks to its slew of wins at major races around the world including the now legendary three wins in a row at the 24 Hours of Le Mans in 1955, 1956, and 1957.

William Heynes was the Jaguar Chief Engineer and Technical Director who had hired Malcolm Sayer in 1951. The two men first collaborated on the Jaguar C-Type before beginning work on the sports racing car that would change the world, developing some technologies that are still in use in racing cars to this day. 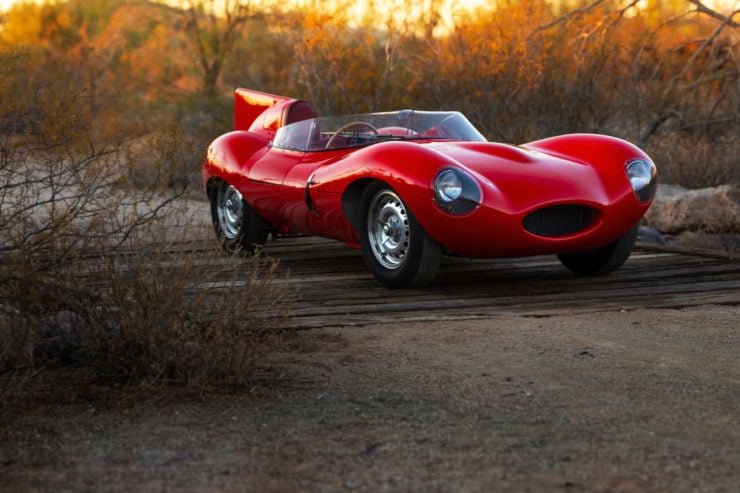 Above Image: The distinctive and highly aerodynamic shape of the D-Type helped some versions of the car reach top speeds close to 200 mph, an astonishing figure for the 1950s.

They designed the D-Type around a central monocoque tub, front and rear subframes were developed to hold the engine and suspension up front, and the fuel cell and rear suspension in the back. This design helped to both lower weight and increase rigidity.

They then designed what is considered one of the most beautiful car bodies of all time to envelope the monocoque and subframes, utilizing Sayer’s aircraft design experience from his time designing aircraft at the Bristol Aeroplane Company during the Second World War.

His remarkable understanding of high-speed aerodynamics resulted in the D-Type with its 3.4 litre straight-six being faster on the Mulsanne Straight at Le Mans than the Ferrari 375 Plus with its 5.0 litre V12.

The combination of handling and high-speed ability were hallmarks of the D-Type throughout its competition life in the mid to late 1950s, and they would see it win time and time again against fields of cars with larger and more powerful engines. 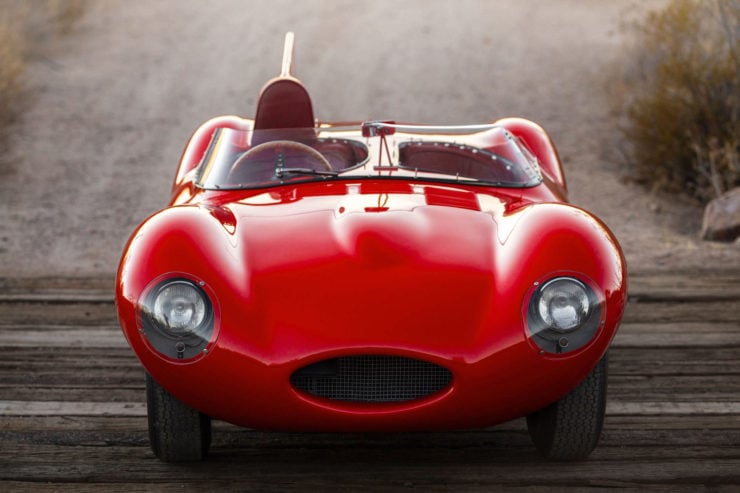 Above Image: The XK engine was tilted slightly for a lower hood line, resulting in a small asymmetrical bulge.

Jaguar withdrew from motorsport at the end of the 1956 season, leaving them with a number of D-Types on hand and nowhere to race them. The decision was made to convert many of them to Jaguar XKSS specification – essentially turning them from Le Mans-winning race cars to road-legal sports cars, they proved popular and the most famous XKSS owner was A-list American actor Steve McQueen.

Tragically in 1957 a fire broke out at Jaguar’s Browns Lane plant, destroying many D-Types awaiting conversion to XKSS specification. As a result just 16 examples were built and they’re now among the most collectible cars on earth.

Engineering and aerodynamics from the D-Type would strongly influence the Jaguar E-Type and set the design language for Jaguar going forward – even today the best selling Jaguar F-Type has strong Heynes/Sayer styling influences.

The Jaguar D-Type you see here is remarkable for a number of reasons, perhaps the most notable of which is its color – a highly unusual bright red rather than the more common British racing green. 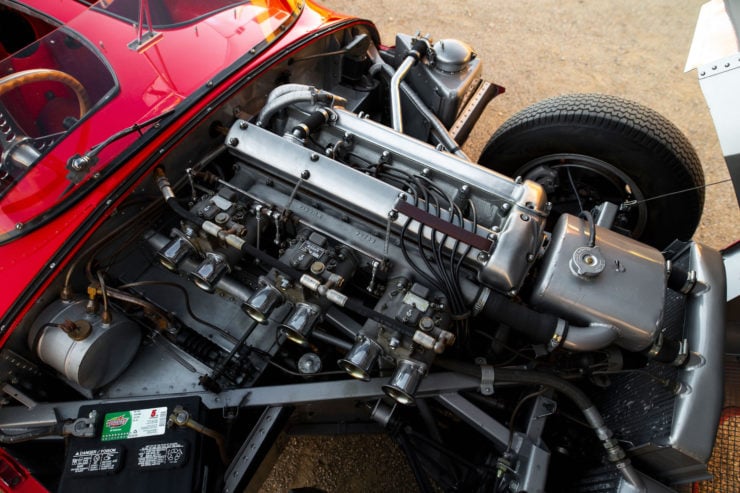 Above Image: The XK engine is fitted to a front subframe that attaches directly to the central monocoque.

It’s believed that just two or three D-Types ever left the Jaguar factory painted red, one historian suggested it may have been to break into the Italian privateer racing market, though this may have been tongue in cheek.

The car was delivered new to Henlys of Manchester, England in 1955 where it remained unsold, it was finally bought by an automobile salesman by the name of Bernie Ecclestone (yes, that Bernie Ecclestone).

Ecclestone sold it to racer Peter Blond for £3,500, and he campaigned the car and took two wins at Snetterton, with race entries in period at Aintree, Silverstone, Oulton Park, and Goodwood.

Today the car has an unbroken history file and still carries its numbers-matching 3.4 litre Jaguar XK engine, as well as its distinctive red paint work and red leather interior.

It’s due to roll across the auction block with RM Sotheby’s on the 22nd of January and you can click here if you’d like to read more about it or register to bid. 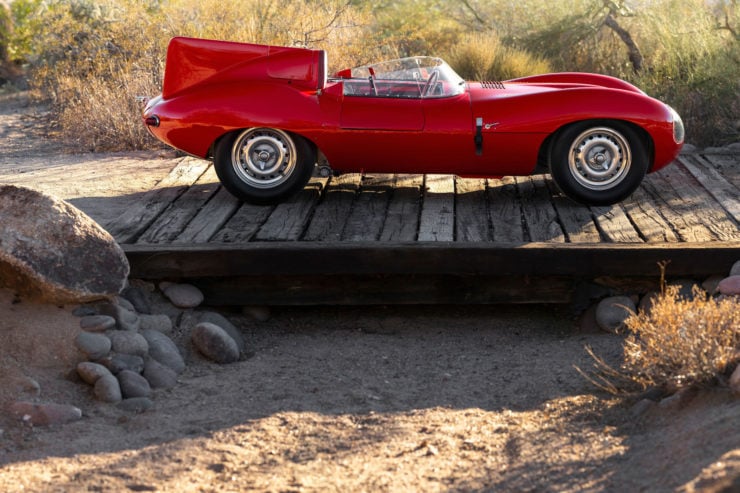 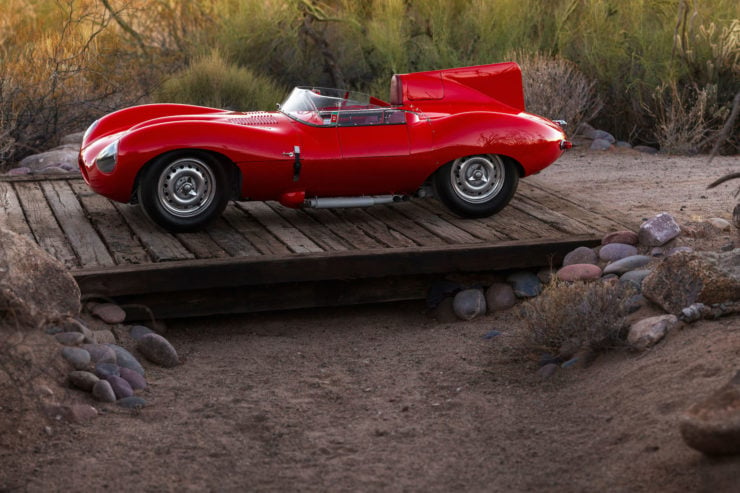 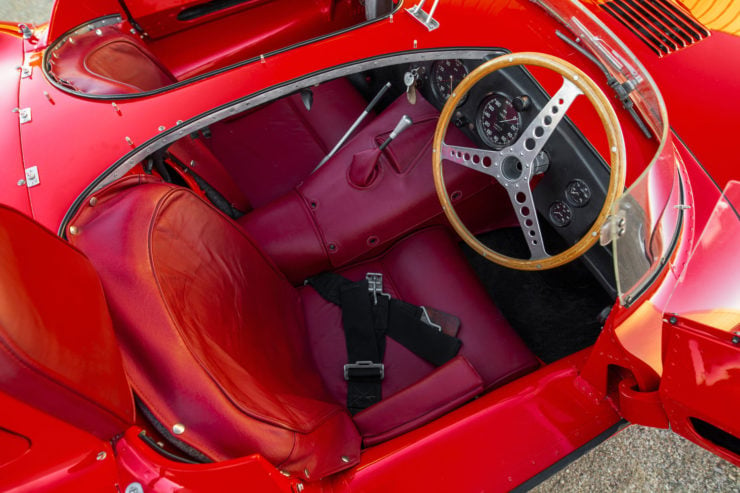 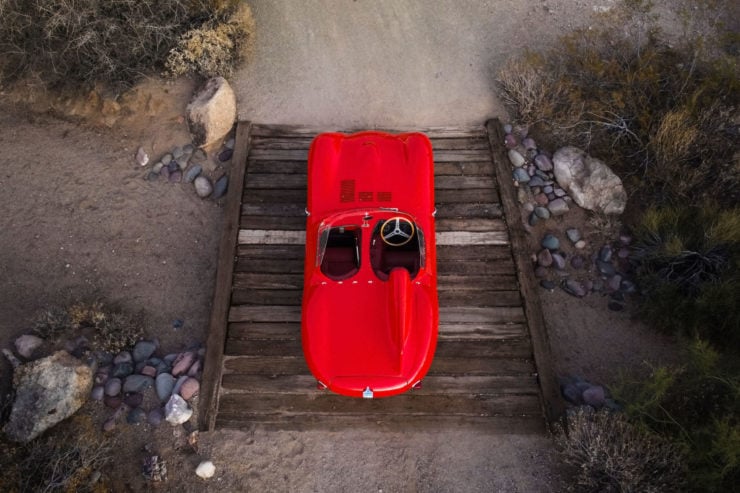 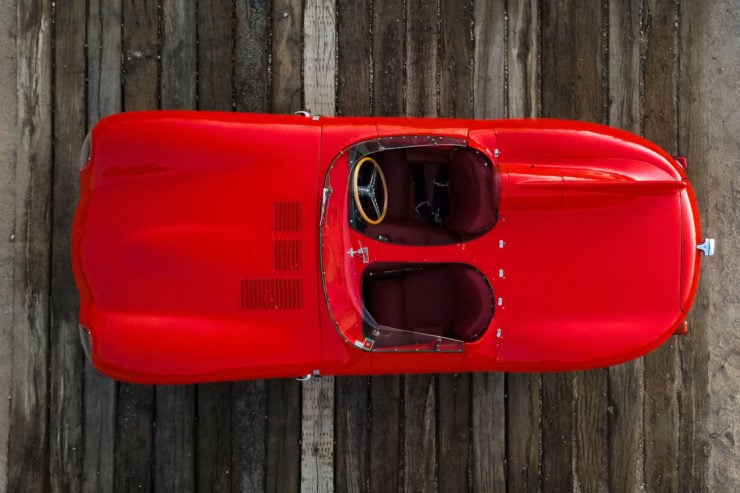 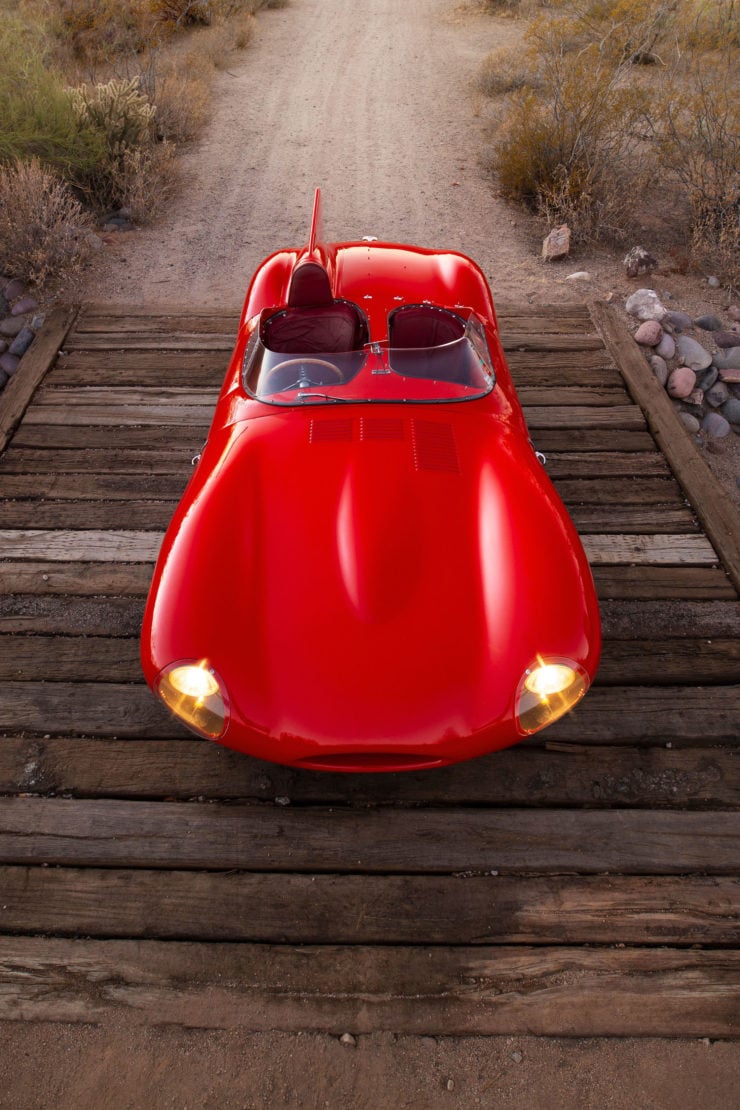 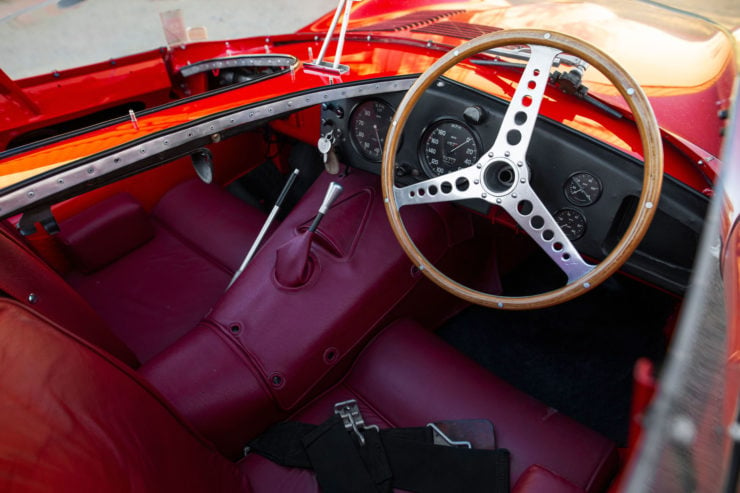 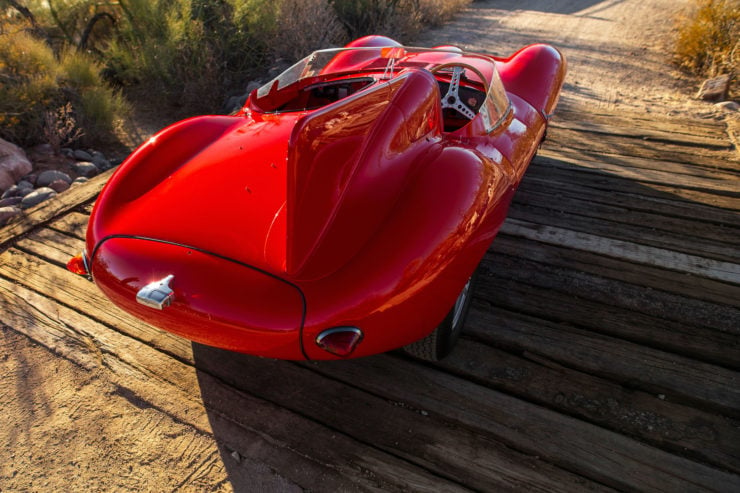 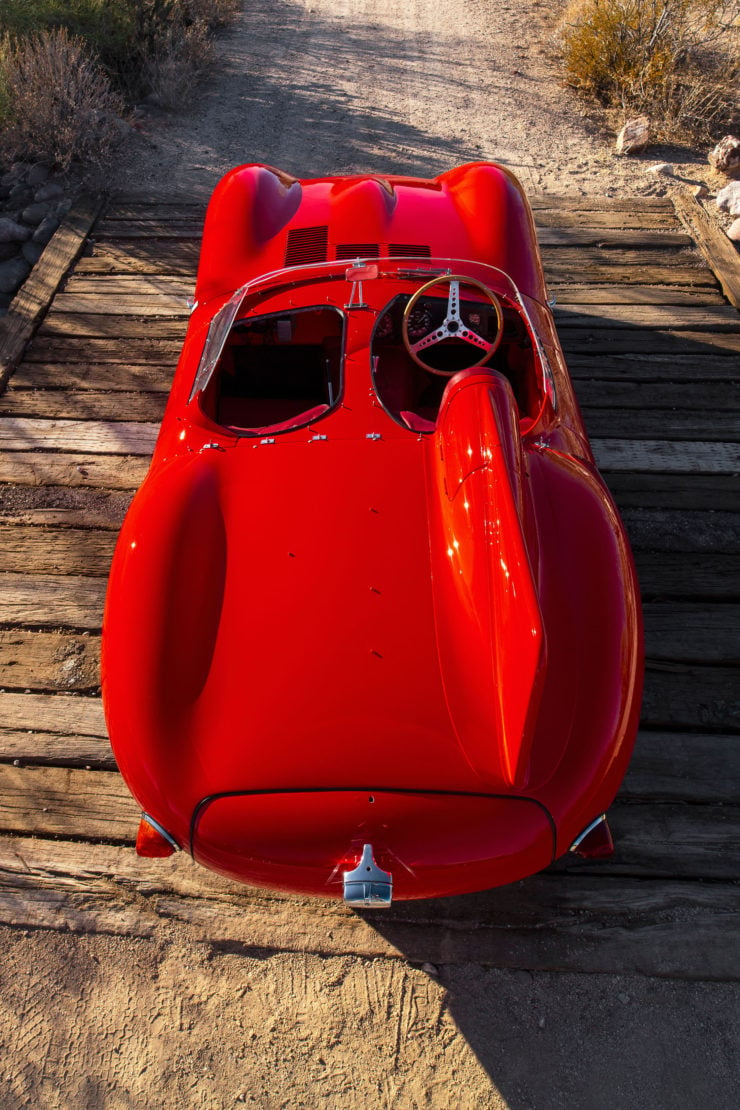 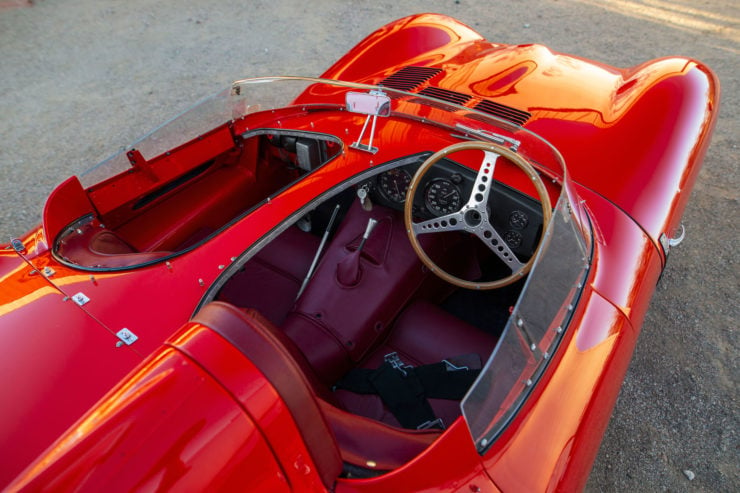 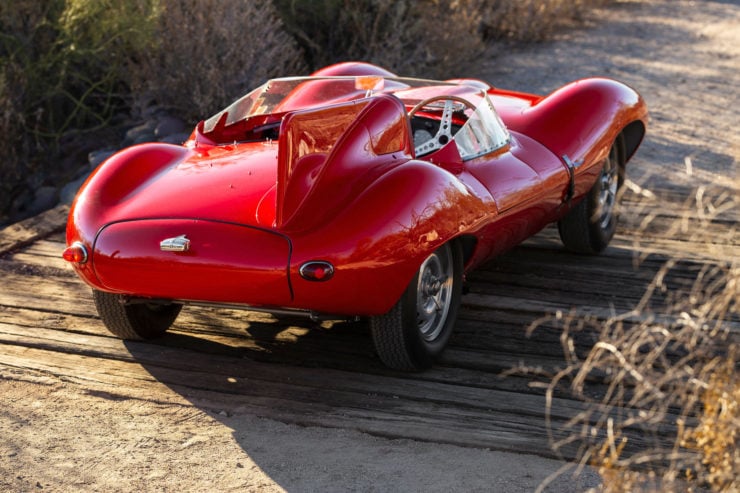