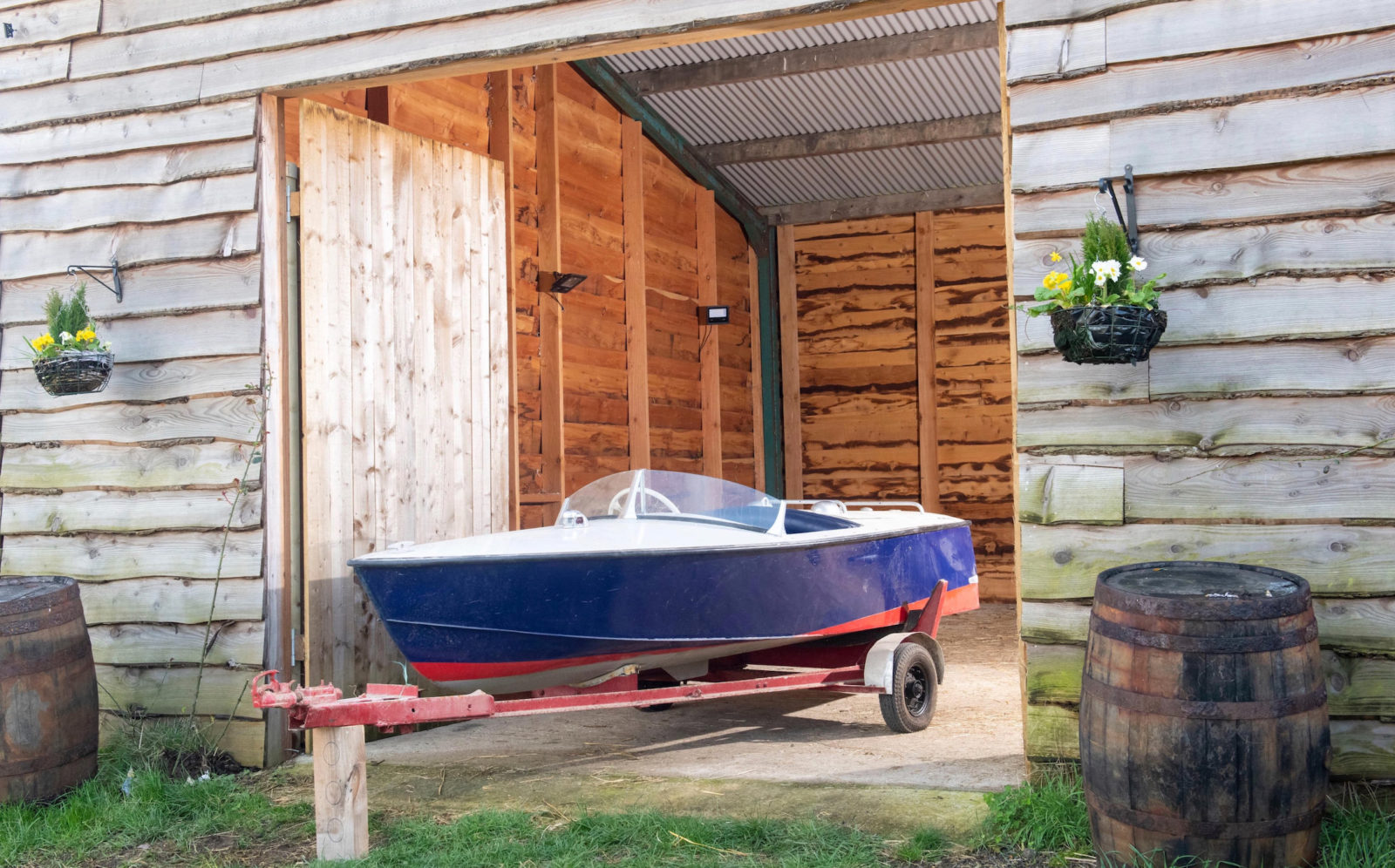 This is the original and unrestored 1956 Albatross MkIII Super Sports Runabout that was owned and used by the late Prince Philip, Duke of Edinburgh. It was made using aircraft design principles and it has an advanced flush-riveted aluminum monocoque hull.

Back in the 1950s and 1960s the Albatross Super Sports was a must-have leisure craft for the rich and famous. Celebrity owners included Prince Rainier of Monaco, Grace Kelly, George Formby, Aristotle Onassis, the Prince of Greece, Thai Prince Bira, Lord Docker, and Prince Philip who owned two.

In the years shortly after WWII there was a shortage of almost all raw materials, with the exception of aluminum – specifically the varieties of aluminum alloy used in aircraft manufacturing. This is a key reason why Land Rover made the bodies of the Series 1 (and subsequent Series) vehicles from it. 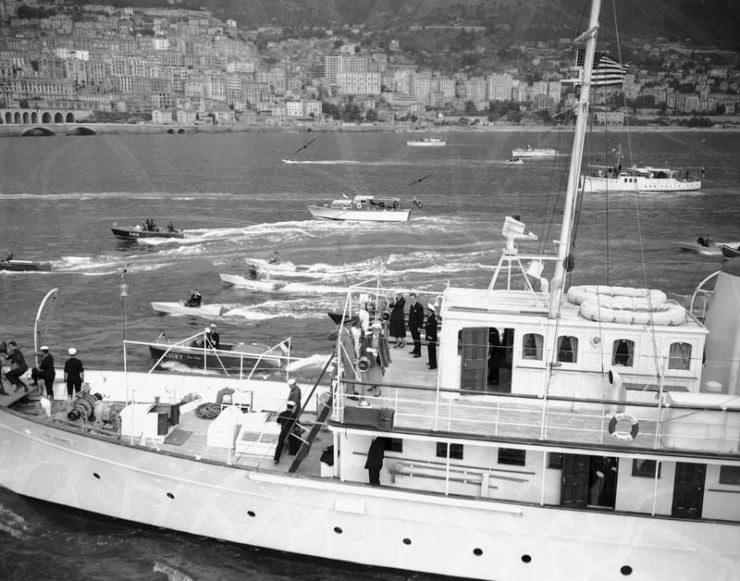 On the upper deck of the large yacht in the foreground you can see Prince Rainier of Monaco with Grace Kelly standing with the captain who is wearing a white hat. There are a number of Albatross boats in the background.

Other manufacturers experimented with aluminum alloys including the newly formed hydroplane building company Albatross Marine Ltd, that had been founded in 1949, just four years after hostilities ended in WWII.

Company founder Archie Peace was an aircraft engineer who had worked at the Bristol Aeroplane Company during the war, he was later joined by fellow aircraft engineers Peter Hives and Bruce Campbell.

The three men applied all of the lessons they had learned when designing and engineering aircraft at Bristol into boat design. They started off building high speed, race winning hydroplanes and from there they experimented with many other boat designs, including the Albatross Super Sports which is now their most famous creation.

The design of the Albatross Super Sports used the best practices of modern 1950s-era boat building, but while most of its contemporaries were made using wood, the Albatross was made with an aircraft inspired flush-riveted aluminum alloy structure, forming a rigid monocoque shell. 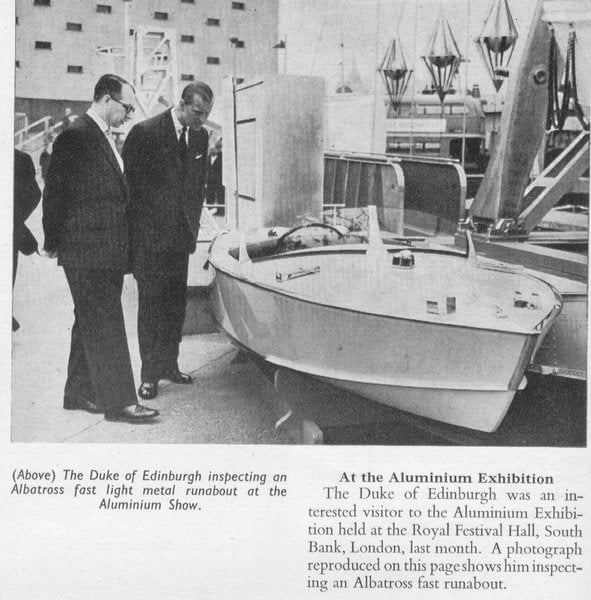 Perince Philip was said to have loved the Albatross from the first moment he saw it, he owned too and delighted in driving them.

This made the Albatross Super Sports not only lighter than its wooden counterparts, but stronger too, and impervious to wood rot.

The Super Sports was given bench-style seating for two, a two-part windscreen to keep off spray, and a mid-mounted engine that sent power to a single propeller in the rear.

Though the boats look small they had an excellent power-to-weight ratio, and could easily pull two water skiers through the water at the same time, at speed.

The clever design was powered by a marinized automobile engine, the exact engine used changed as each new generation was released, simple four-cylinder Ford side-valve engines were used initially, followed by more powerful engines over time.

Due to its small size, low weight, and state-of-the-art engineering the Albatross Super Sports became a favorite among the rich and famous, many of whom carried one on their luxury super yachts for water skiing. 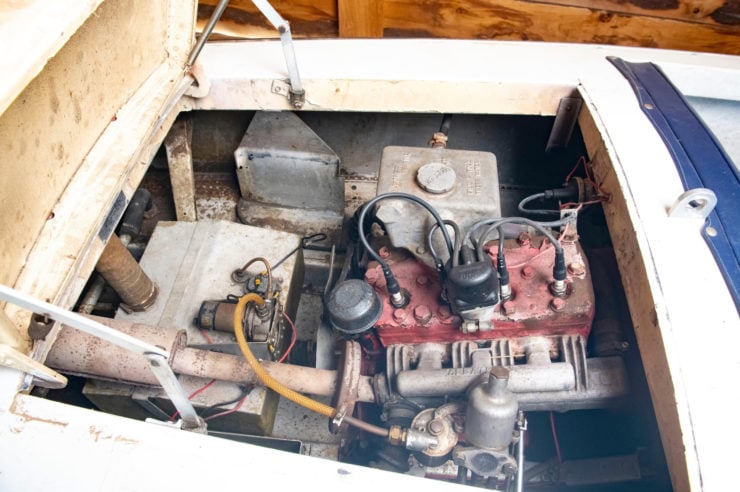 The engine fitted to this boat is a marinized version of Ford’s 100E 1,172cc four-cylinder sidevalve engine, giving the boat a maximum speed of 34 mph.

One of the reasons for this was that wealthy company co-owner Bruce Campbell carried one on his 100ft luxury motor yacht called Christina, when he anchored in a Mediterranean bay he would take his Albatross Super Sports out and drive it among the other yachts.

People would ask him what kind of boat it was, and he was known to sell them the boat out from under himself, then get a new one from the factory.

One of the luxury motor yachts that carried an Albatross was the Royal Yacht Britannia, as mentioned above Prince Philip had actually owned two Albatross Super Sports runabouts in the 1950s, upgrading to the more powerful Mark III version in 1956 – the boat you see pictured here.

Other celebrity owners included a who’s who of the 1950s including Prince Rainier of Monaco, Grace Kelly, George Formby, Aristotle Onassis, the Prince of Greece, Thai Prince Bira, Lord Docker, and Brigitte Bardot was regularly seen cruising around in one.

The boat you see here is a Mark III 1956 Albatross Super Sports that was acquired by the late Prince Philip directly from the boat maker, then kept aboard the Royal Yacht Britannia. 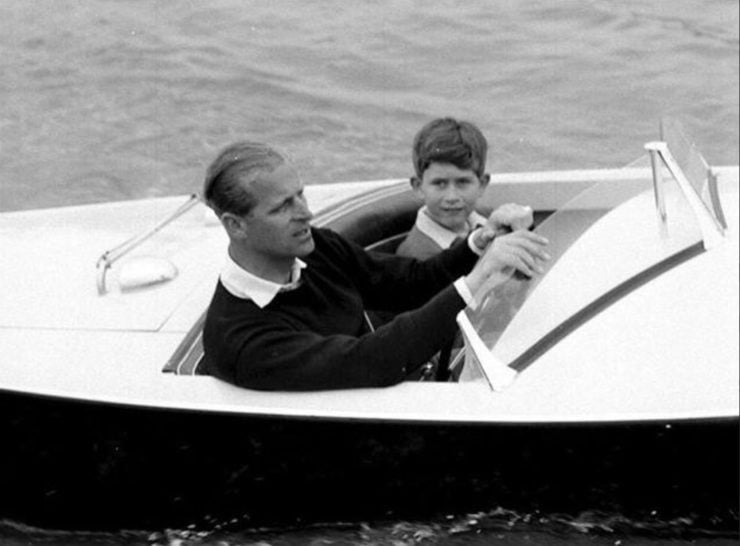 This boat is one of only 607 of this type ever made, and it presents in overall original condition, though it’s in obvious need of a restoration.

After serving as the water skiing boat aboard Britannia for 11 years this Albatross was moved to the Royal Balmoral Estate where it was reportedly piloted by the late Princess Diana.

Interestingly, after the death of Prince Philip, Prince Charles chose the picture above as the image on his thank you card which was sent to the many people who sent their condolences. 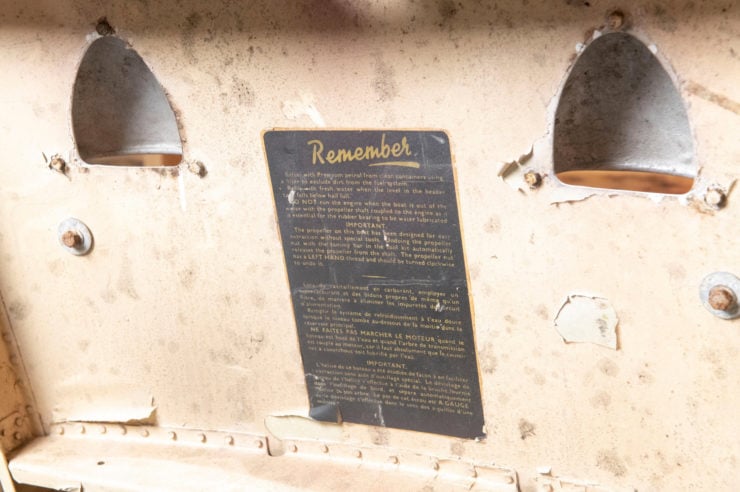 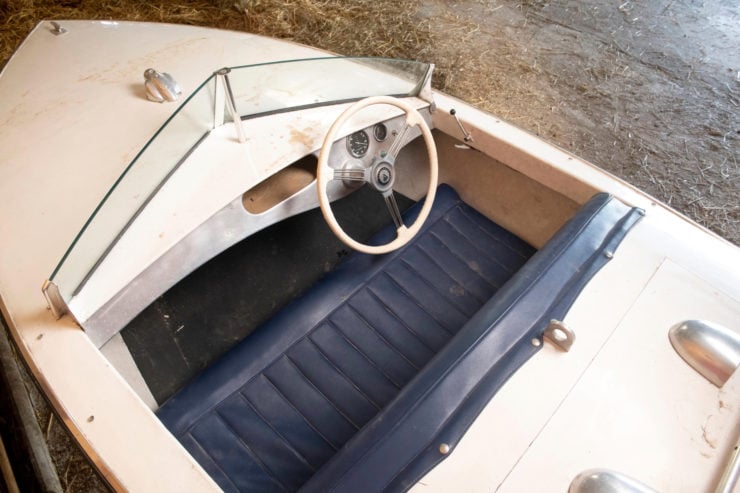 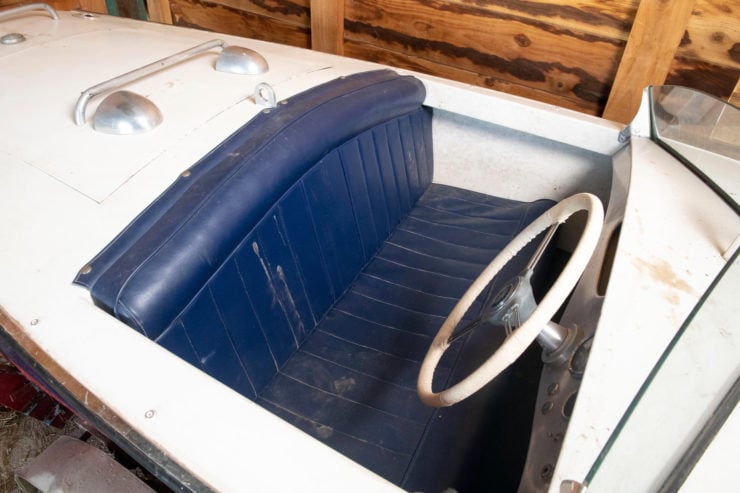 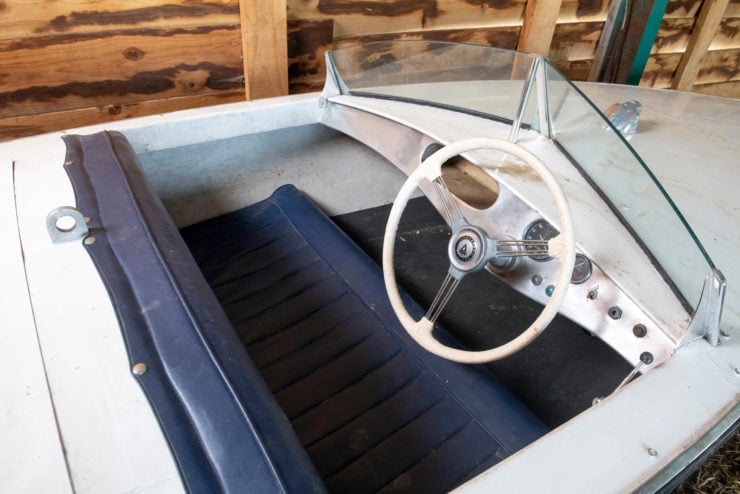 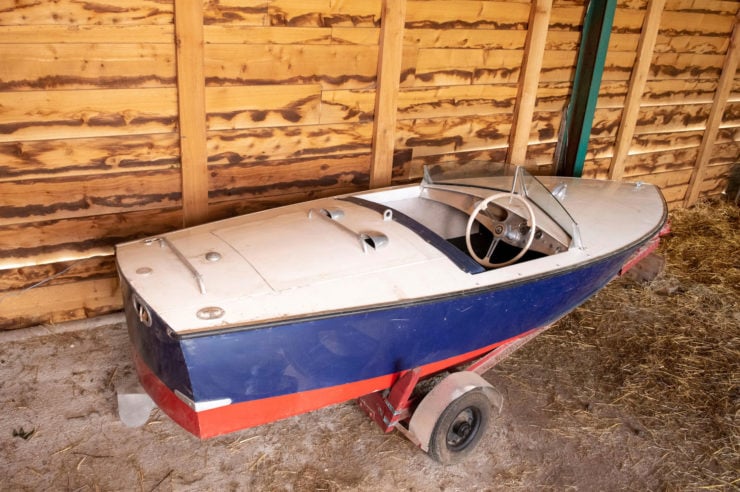 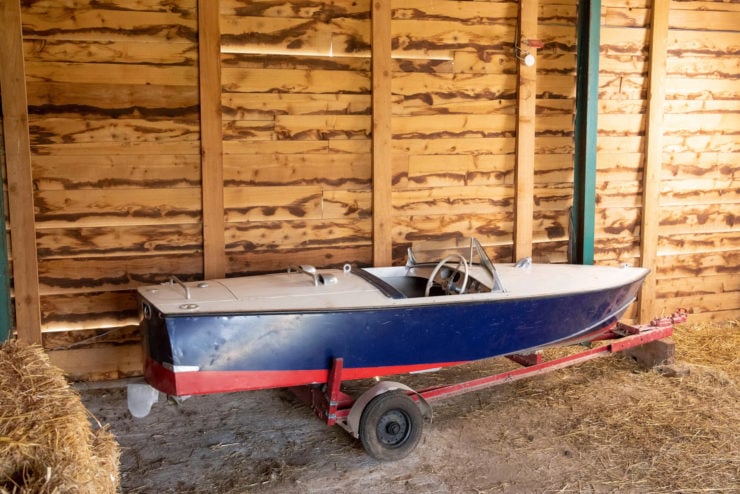 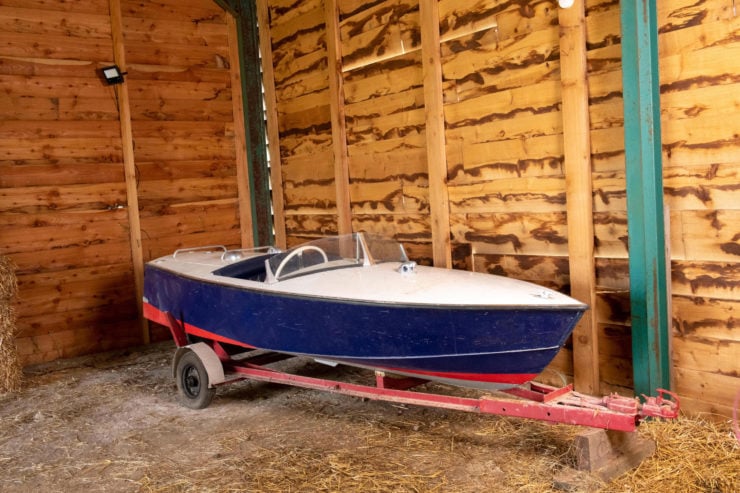 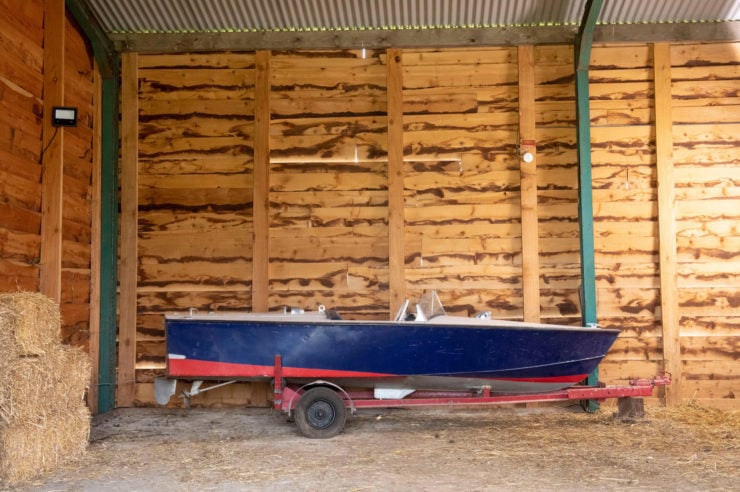 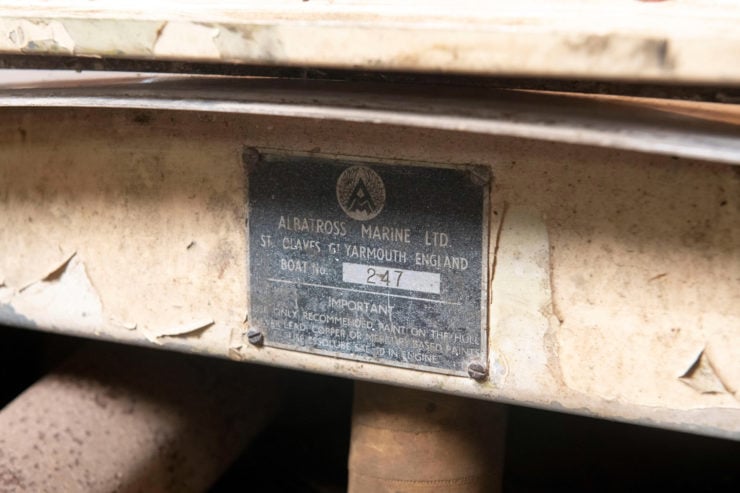 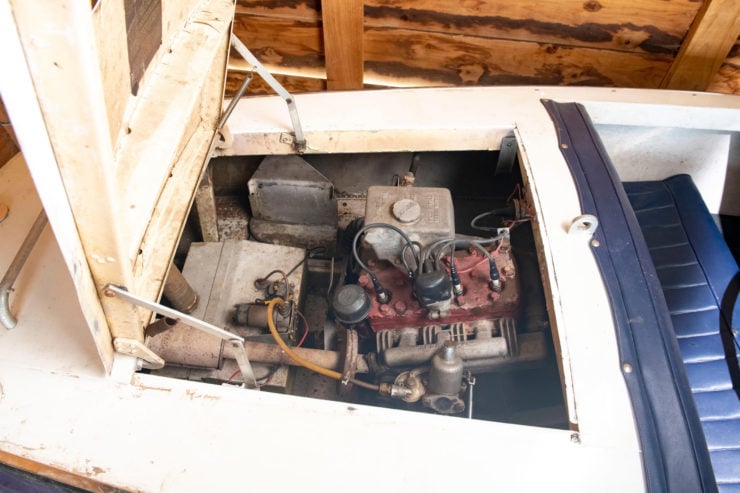 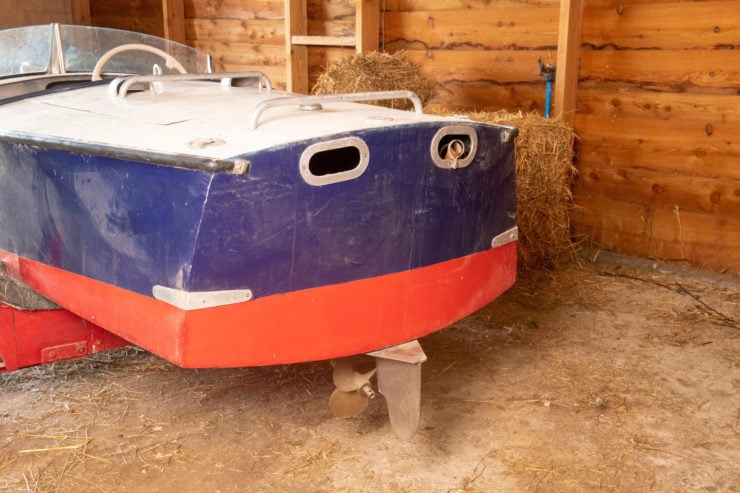 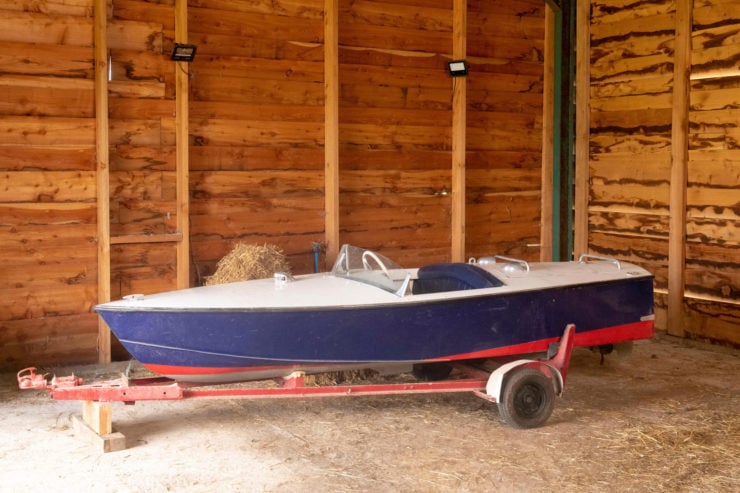