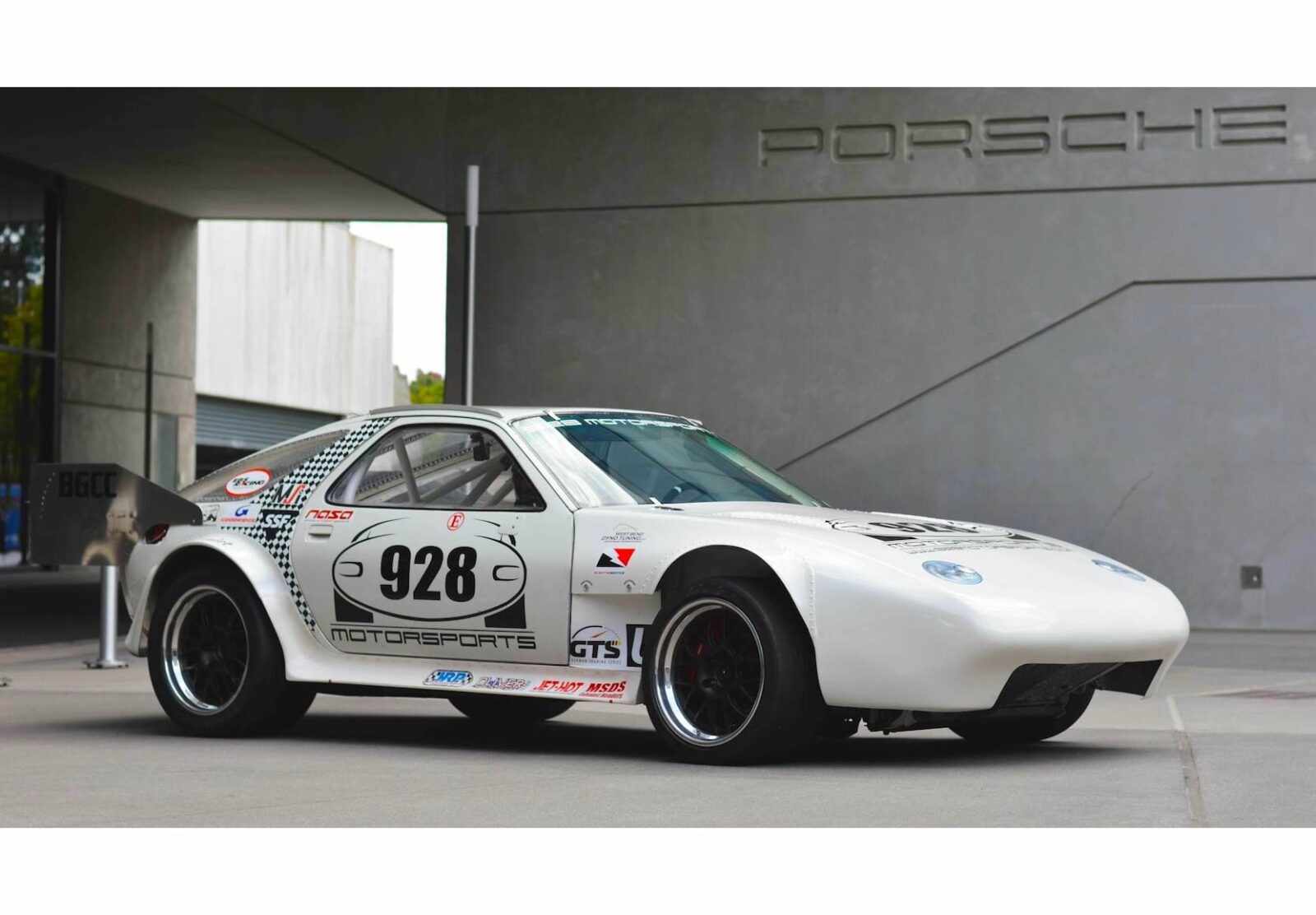 This is officially the fastest Porsche 928 on Earth, it set the world Porsche 928 speed record at 234.434 mph in 2020 at the TRC Proving Grounds. It’s not just a one trick pony however, the car has raced multiple times at the Pikes Peak International Hill Climb, setting the fastest time of any two-wheel drive car in 2009.

The Porsche 928 was originally released in 1977 as the intended replacement for the aging 911 model. Unlike the 911, the 928 is powered by a liquid-cooled, front mounted engine and was intended as a modern grand tourer that would appeal to Europeans and Americans alike.

Porsche changed direction of course, and the 911 would remain in production, however the 928 would perhaps be a clearer forefather of most modern Porsches. The majority of cars built by the German automaker now are powered by front mounted, liquid cooled engines and they typically favour luxury over the more performance-oriented early 911s.

Although it would never replace the 911 the 928 did stay in production for a remarkable 18 years from 1977 to 1995, going through significant upgrades over this time and earning an important place in Porsche history.

Much of the secret to this car’s success lines under the hood, it’s powered by a custom built 6.54 litre Porsche 32 valve V8 engine built by the team at 928 Motorsports. They increased the capacity by boring and stroking it from its original factory displacement of 5.4 litres and power output of 345 hp.

In its current form the engine is turning out a remarkable 1,114 hp with 956 lb ft of torque, vastly more than any of the original Porsche engineers had ever anticipated, requiring a slew of custom parts and a years-long testing regimen.

As you may have guessed, that’s not quite the full list of performance parts – the engine also has custom camshafts from 928 Motorsports, and a Vortech V7 YSi supercharger with a cogged belt drive. This engine is mated to a 6-speed Tremec TR6060 transaxle with close-ratio gearset receiving power via a Tilton triple-disc clutch and a lightweight aluminum torque tube by 928MS.

When it comes to any car it’s common knowledge that you can’t just increase engine power when seeking better performance, you also need to look into other aspects of the vehicle like its weight, brakes, aerodynamics, suspension, and wheels/tires.

This 928 has seen a vast array of modifications – as is plainly apparent by looking at it. The car is fitted with Forgeline 13 x 18 three-piece modular wheels, Hoosier 315/30/ZR18 front tires and 345/35/ZR18 rear tires, Brembo 355mm vented cross-drilled 4 piston brake calipers, and PRO double-adjustable shocks on all four corners with a 928 Motorsports Hypercoil spring kit.

Much of the cars interior and sound insulation has been removed for weight reduction purposes, it’s fitted with a Halon fire suppression system and a full internal 9-point roll cage. It’s using a 928 Motorsports GT-1 wide-body kit and rear wing, the doors, hatch, and complete front clip are all removable without tools. 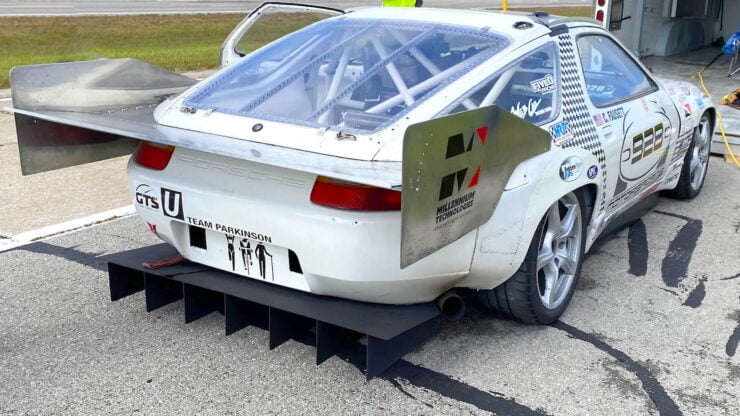 The car’s front chin splitter made from sacrificial composite and the complete bottom of car has been aerodynamically panned. Impressively the car’s weight is approximately 2,850 lbs wet, vastly less than the ~3,500 lbs of the original car.

So far this car, nicknamed “Meg” for “Megalodon”, has accrued the following major race and land speed results:

If you’d like to read more about this 928 or register to bid you can click here to visit the listing on Mecum, it’s due to cross the auction block in mid-May. 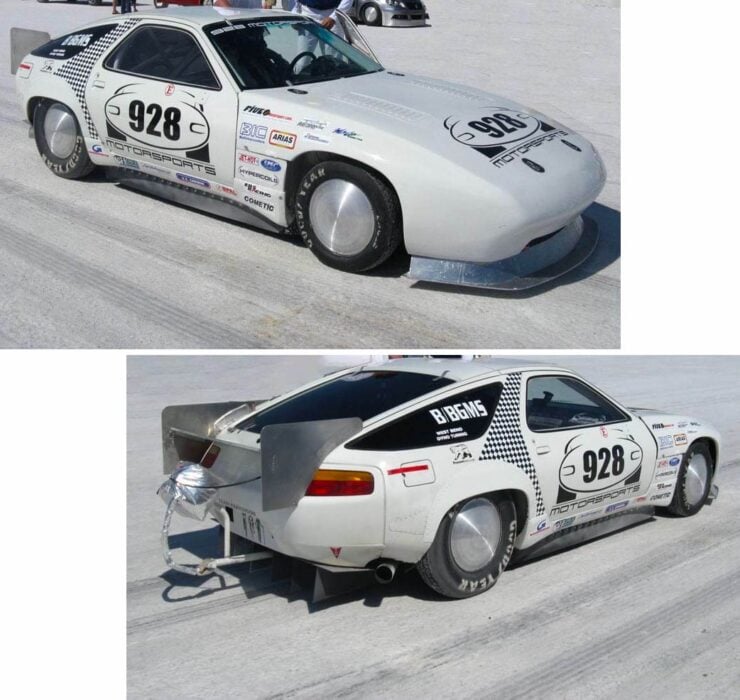 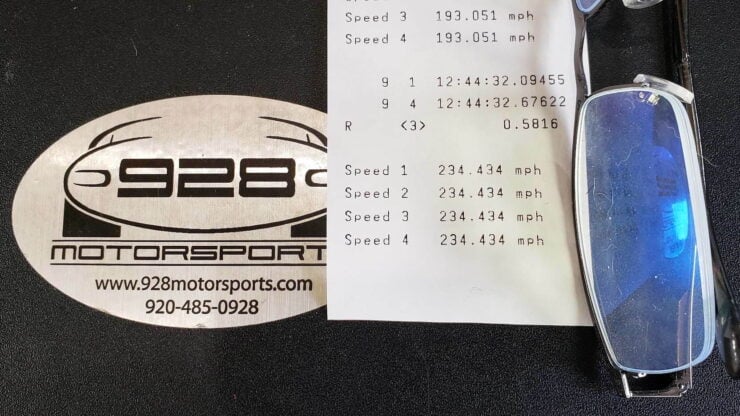 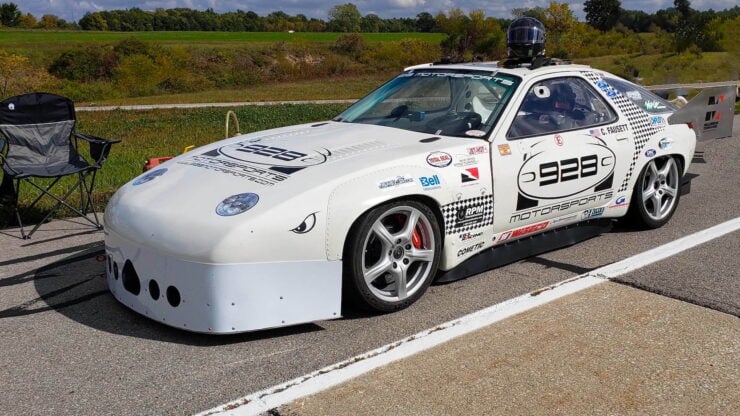 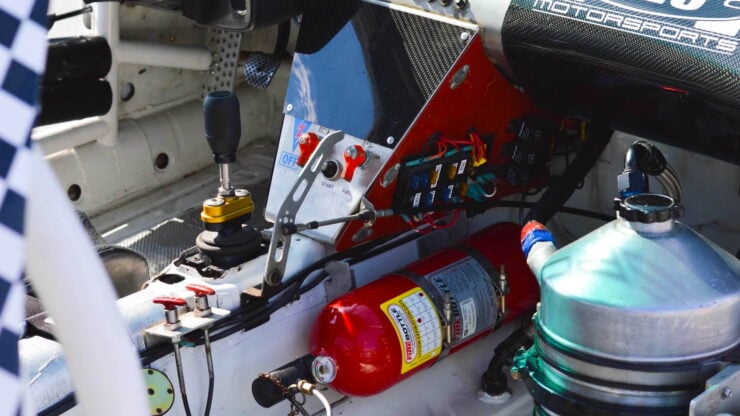 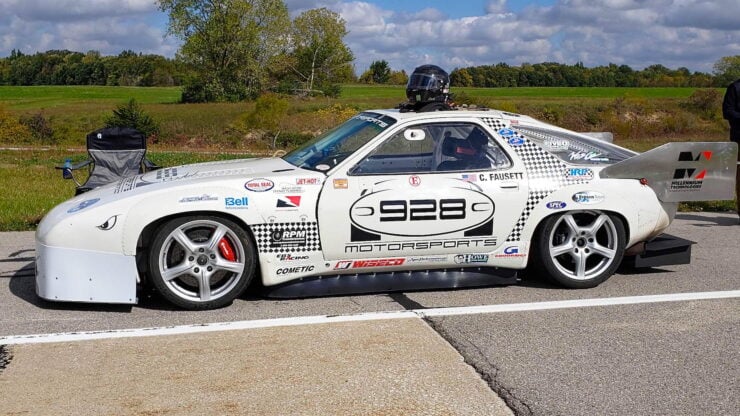