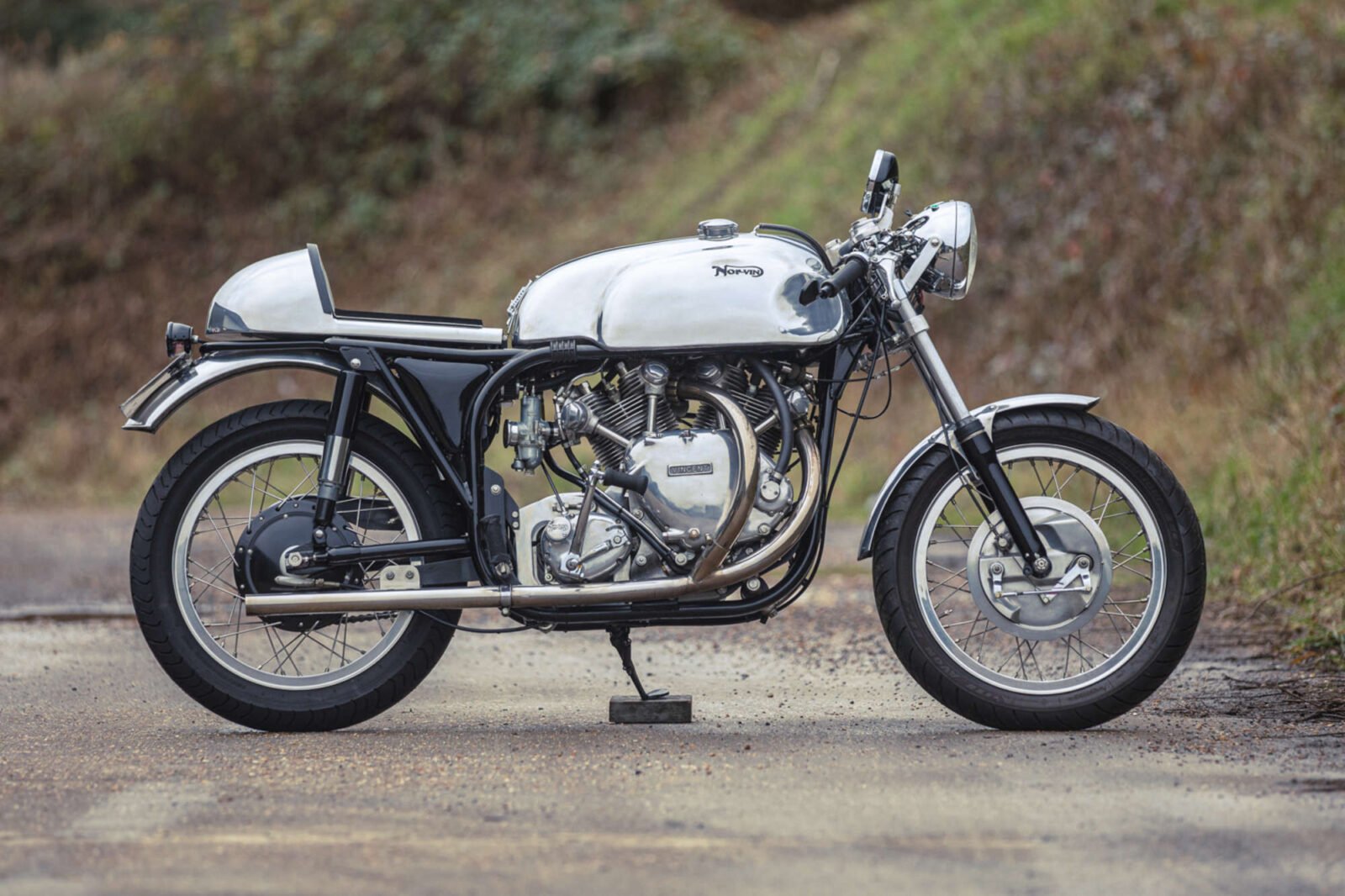 This is a 1958 Norvin cafe racer, if you’ve never heard of the motorcycle manufacturer Norvin before don’t worry – there never actually was one. Norvin is a portmanteau of “Norton” and “Vincent,” as this motorcycle has a Norton Featherbed frame and a Vincent V-twin engine.

The most famous of the British portmanteau motorcycles is almost certainly the Triton, a combination of Triumph’s legendary parallel twin and the Norton Featherbed frame. The Norvin is a motorcycle similar in spirit to the Triton, just with the dial turned up to 11, then snapped off. 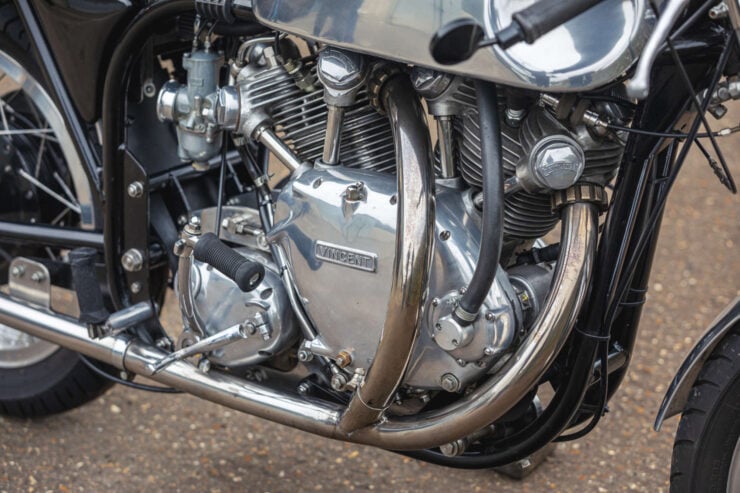 This combination of the Vincent V-twin and the Norton Featherbed frame creates a quintessentially 1950s cafe racer that combines the best elements of each donor bike.

Although we think of the Norvin as being one of the most British motorcycles ever made, the fact of the matter is that it owes its existence to the Irish and the Australians.

Through they had no formal engineering training, the brothers devised a innovative new motorcycle chassis that could incorporate a wide variety of engines, it had a very strong headstock, and a swinging arm rear with twin shock absorbers.

The McCandless brothers had developed the first prototype frames on their own dime, but in 1949 they were hired exclusively by the Norton Motorcycle Company. This would turn out to be one of the best decisions ever made by the British motorcycle manufacturer. 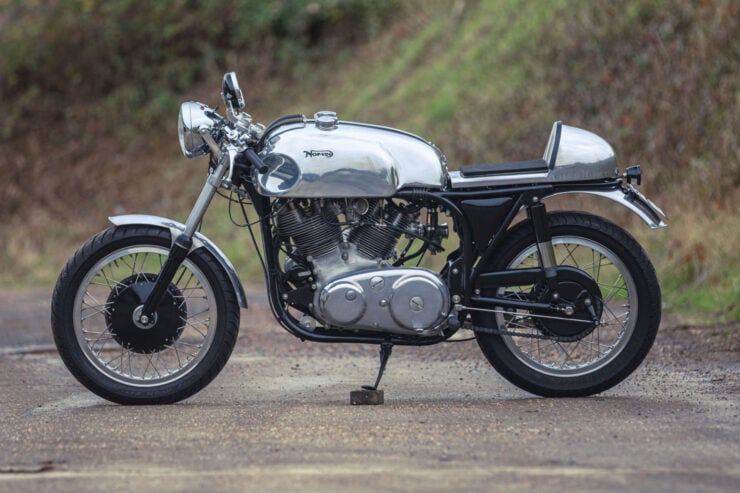 The Featherbed frame was expensive to produce as it required over 40 feet of the best quality Reynolds steel tubing.

The unusual “Featherbed” nickname was unintentionally coined by Isle of Man TT racer Harold Daniell. After testing both the new McCandless frame and the Norton “garden gate” frame in 1950 he remarked that the McCandless frame was like “riding on a featherbed,” he meant this in the most complimentary way possible. The name stuck and it’s been in use now for over 71 years.

Norton would use the Featherbed frame extensively in both their road-going and racing frames for 20 years. The design was closely emulated by BMW on their early R series bikes and Münch for their Mammut motorcycle.

The story behind the development of the Vincent V-twin is legendary in motorcycle circles, Australian engineer Phil Irving had a couple of blueprints on his drafting table of a Vincent single cylinder engine. 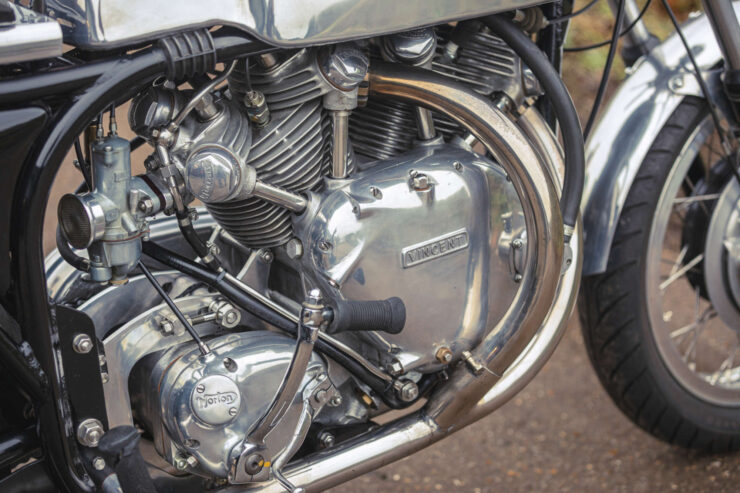 With a displacement of 998cc the Vincent V-twin could produce well over 70 bhp after tuning. It was a popular engine for both racers and land speed record breakers.

Apparently these blueprints overlapped in such a way that he realized they could created a V-twin engine with only relatively minor modifications, and the first prototype was built within weeks.

The first production V-twin went into production in 1936 in the Vincent Series A Rapide which was capable of 110 mph, making it one of the fastest production motorcycles in the world.

This V-twin was significantly reengineered before its rerelease in 1946 in the Vincent Series B Rapide. It would continue to be developed through the Series C and D Rapides but its most famous use would be in the Vincent Black Shadow and Black Lightning – the fastest production motorcycles in the world at the time of their release.

The Norvin – AKA The Best Of Both Worlds

Norvins first started appearing in the 1950s in very limited numbers, they were one of the fastest and best handling motorcycles of their time but they cost a significant sum to build for obvious reasons. 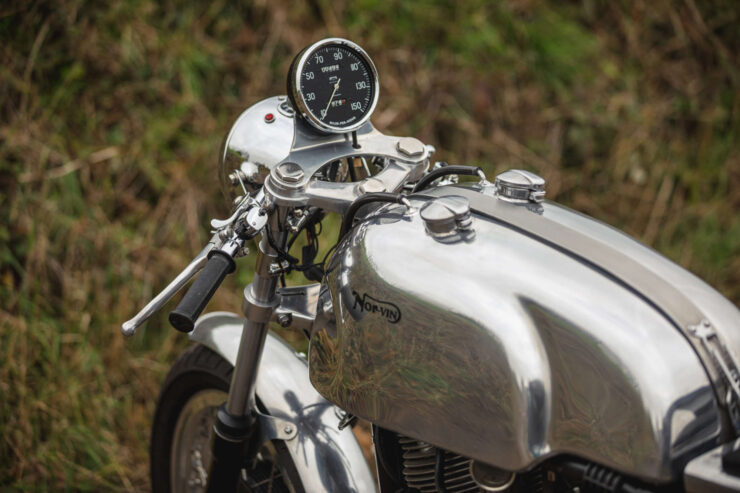 This Norvin cafe racer has all the classic accoutrements including an alloy Manx-style fuel tank, clip-on handlebars, a single seat with a bump stop rear, and a prominent speedometer.

One drawback to the original Vincents has been their steel backbone chassis, though innovative it perhaps wasn’t quite as strong as it needed to be. Many have worked on their own solutions to this over the years, most famously Swiss engineer Fritz Egli who developed his own backbone frame for the Vincent.

One other solution was the use of a Norton Featherbed frame which could accommodate the large Vincent V-twin, and which typically came with excellent Norton suspension already attached.

So popular was this Norton/Vincent combination that a number of companies have bee founded over the years to produce them in limited production runs.

Most Norvins on the road today were built by enthusiastic amateurs and as such their quality can vary somewhat, but they always draw a crowd at shows. 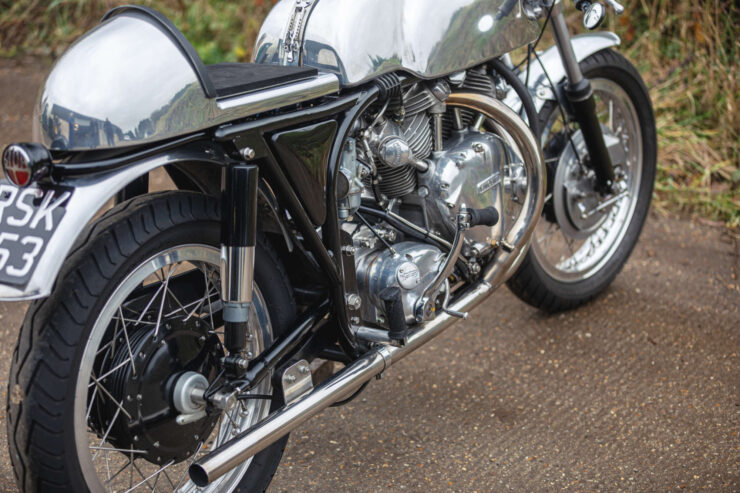 With its alloy wheels, front Triumph twin-leading shoe brakes, and two-into-one straight through exhaust, this Norvin is more than capable of achieving the “ton.”

The Norvin you see here has an engine built by the late John Renwick, it also has a new Norton gearbox and a new clutch and wiring loom.

The bike was built using a 1958 Norton Wideline Featherbed frame fitted with a 1955 Vincent Series D Rapide engine, it has a 5 gallon aluminum fuel tank and seat built by Holt Works.

Suspension consists of Norton Roadholder forks up front with twin hydraulic shock absorbers in the rear, and it rides on aluminum rims with new tires.

If you’d like to read more about this unusual custom motorcycle or register to bid you can click here to visit the listing on Silverstone Auctions. It’s due to roll across the block on the 12th of February with a price guide of £40,000 – £45,000. 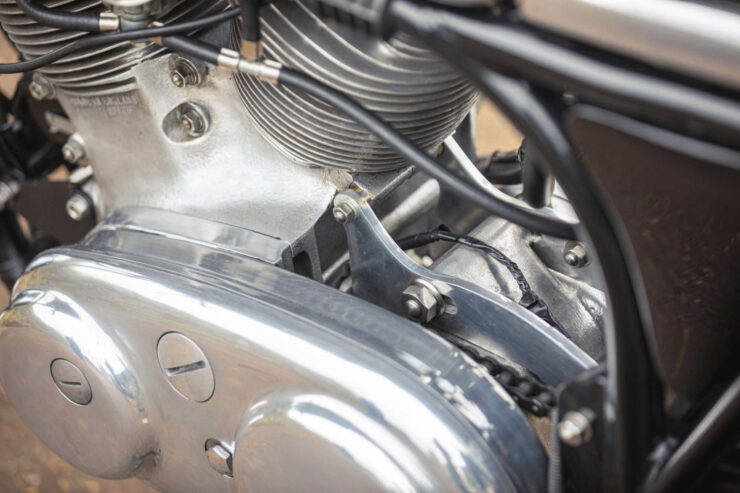 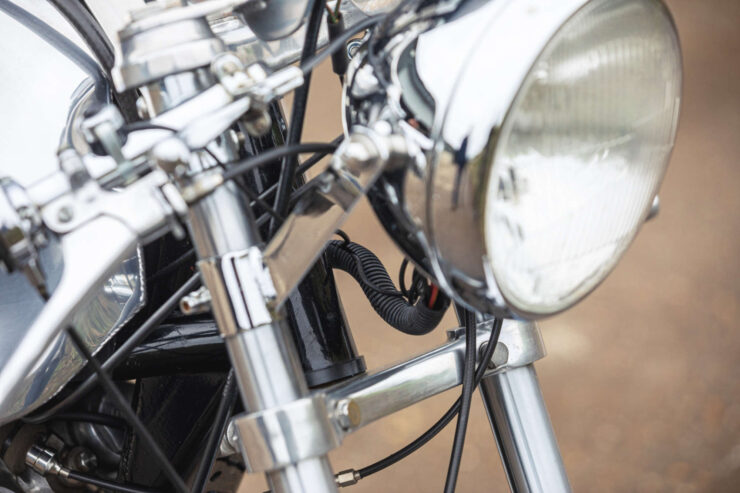 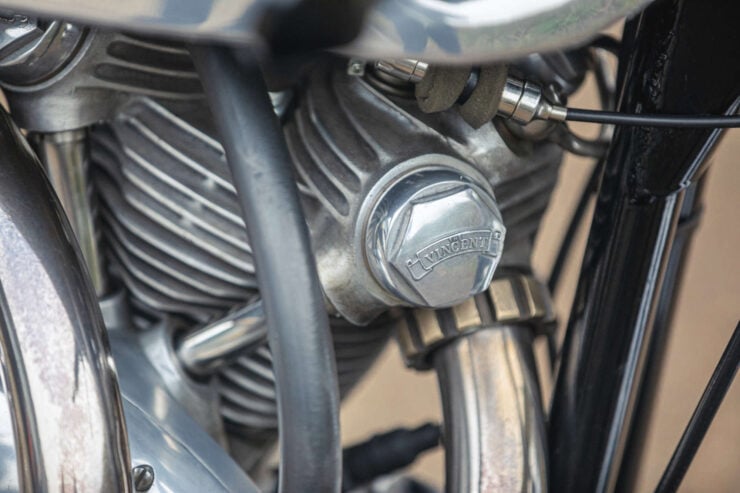 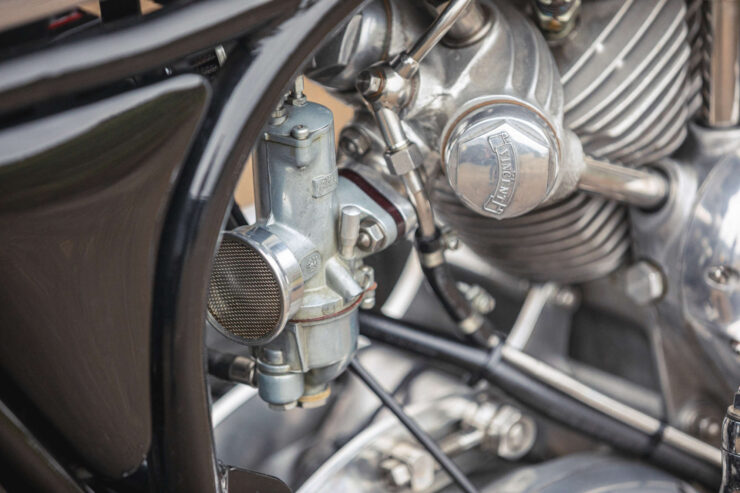 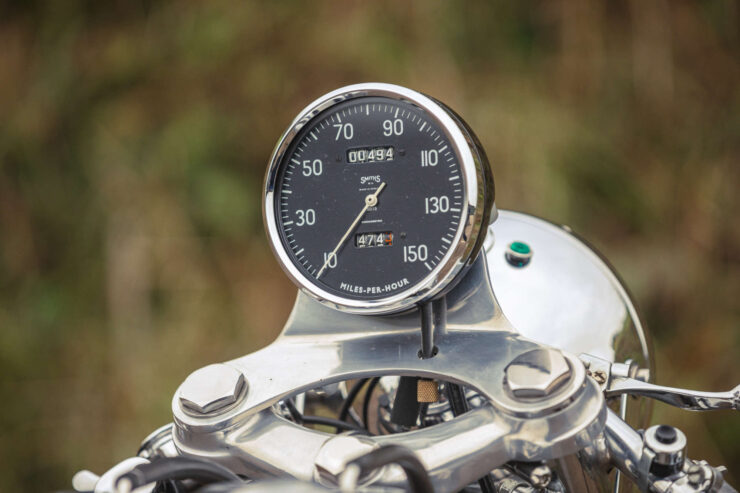 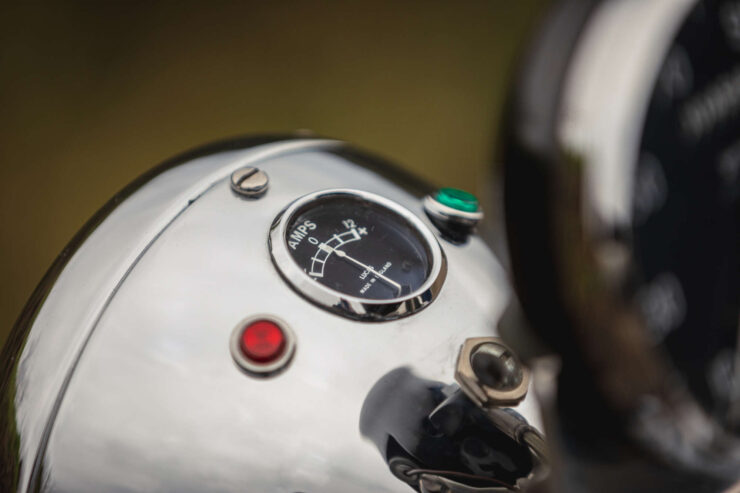 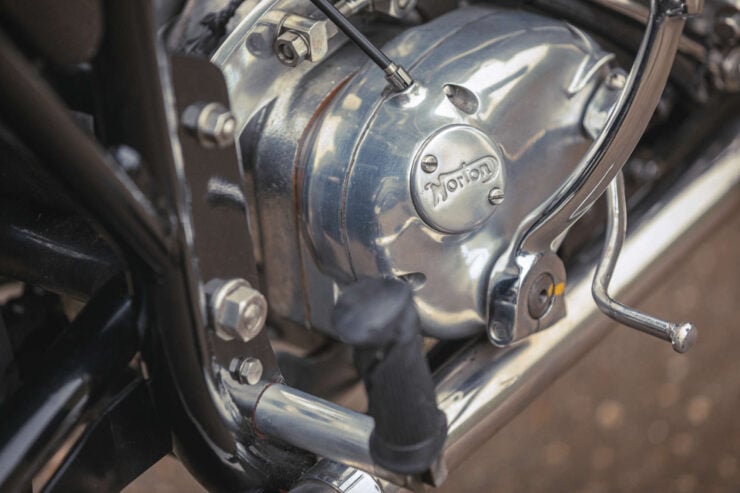 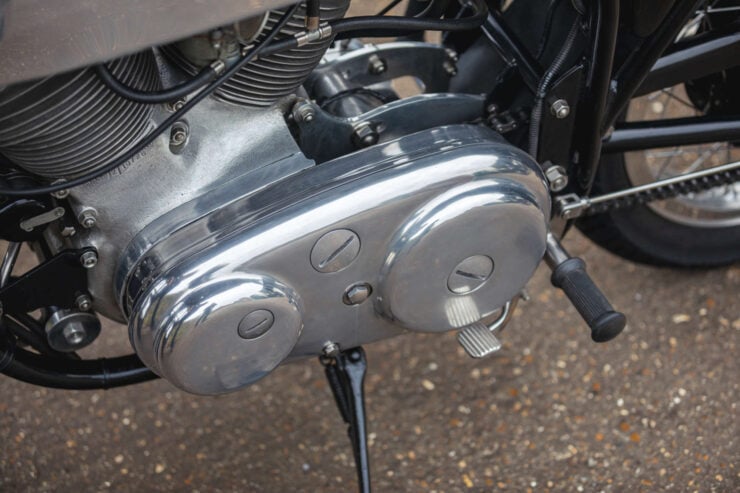 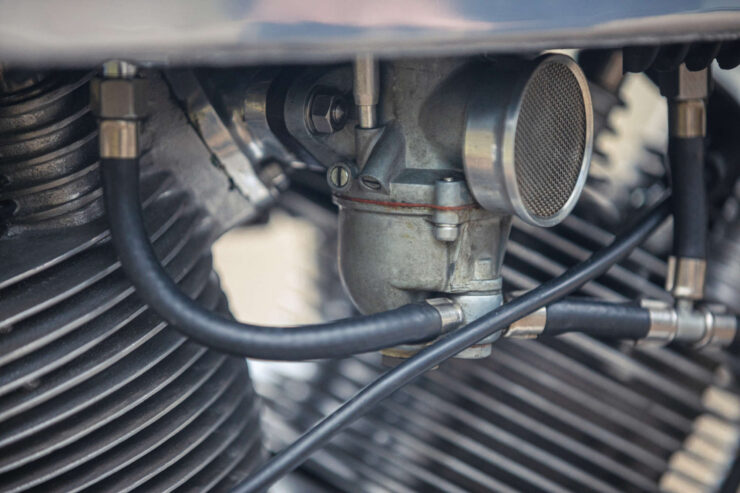