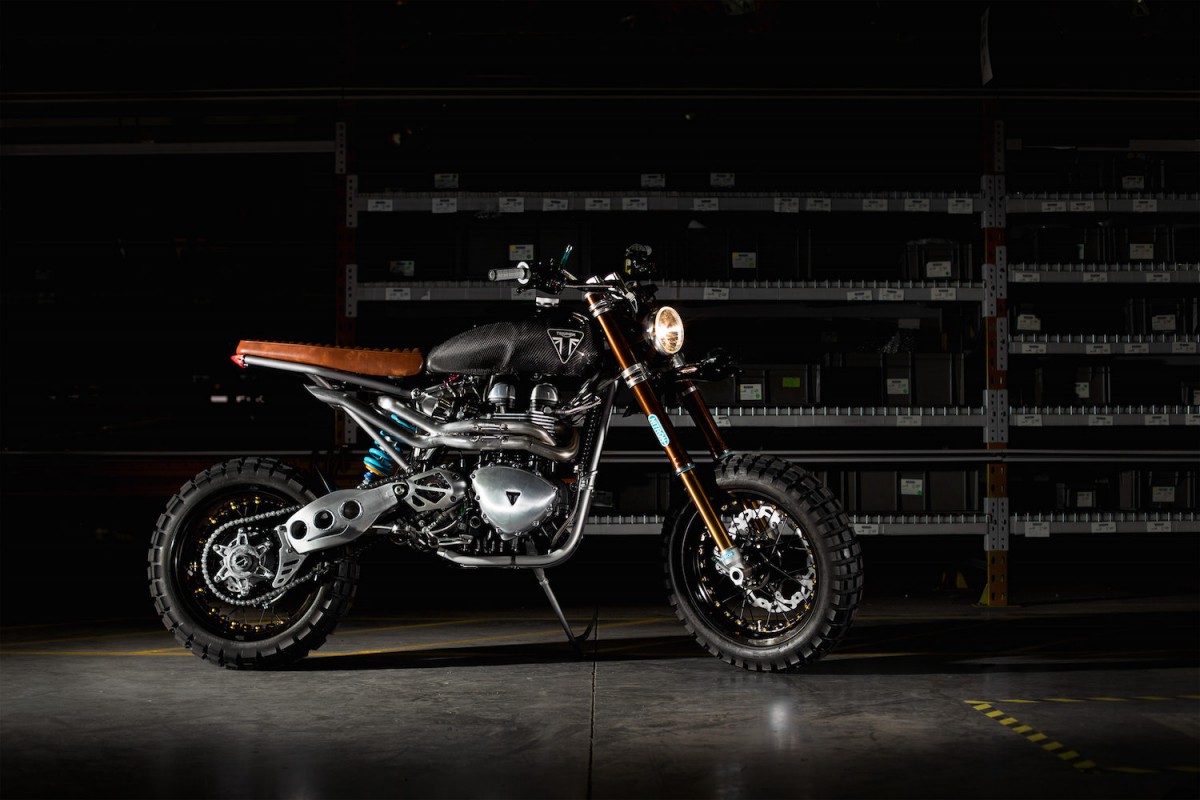 This Triumph Scrambler custom is a little unusual in that it was actually built by the engineers at Triumph as a study into what the Scrambler could evolve into over the coming years. This build is far from being just a slap of paint and a new muffler, every element of the original Scrambler was reworked and many production line components didn’t end up on the finished bike.

Work began with the engine, the head of the stock 865cc Scrambler engine was fully ported and skimmed to increase the compression ratio from 9.2:1 to 11.4:1. Larger inlet and exhaust valves were then fitted with high lift cams (using Daytona 955 profiles) were fitted and the throttle bodies are modified units from the Daytona 675.

The main frame is an entirely custom made unit machined from aluminium alloy and the subframe is fabricated from titanium alloy, the weight savings from these two elements plus a few others added up to 50 kilograms by the end of the build – an astonishing feat of weight loss that resulted in the completed (wet) weight of the bike being just 180kgs, down from 230kgs stock. 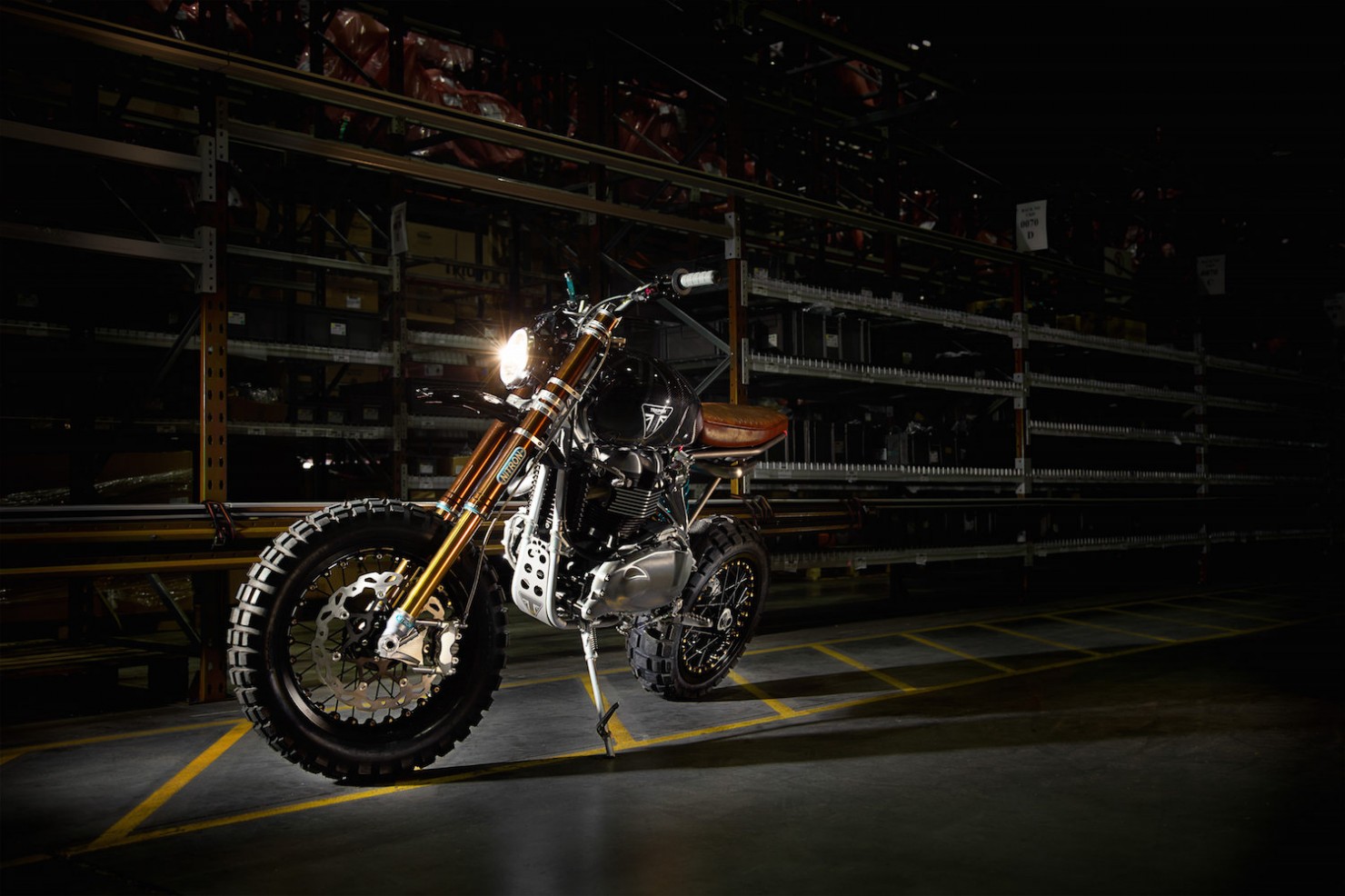 Further contributing to that weight loss is the carbon fuel tank by Ace Fibreglass and Carbon along with a carbon hugger, seat under-tray and headlight bowl. If you’re familiar with Triumph’s other motorcycles you might recognise that swing arm, it’s repurposed from a 2008 Speed Triple, it’s been turned upside-down and heavily modified in-house by Triumph engineers for the direct acting monoshock and chain idler gear.

One of the stand-out features of this build has to be those springs, they’re both Nitron units that were made specifically for this Scrambler. The front wheel now has travel of 300mm, and the rear wheel can move 250mm – this is all fully adjustable with high and low speed damping.

Although it’s exceedingly unlikely that Triumph will mass produce this exact Scrambler en masse, it is potentially a glimpse into what’s in the pipeline for the future. This is an exciting time for the humble Scrambler and we’re anticipating that the significant interest in the genre is going to continue to increase as people diversify from cafe racers into other classically styled motorcycles. 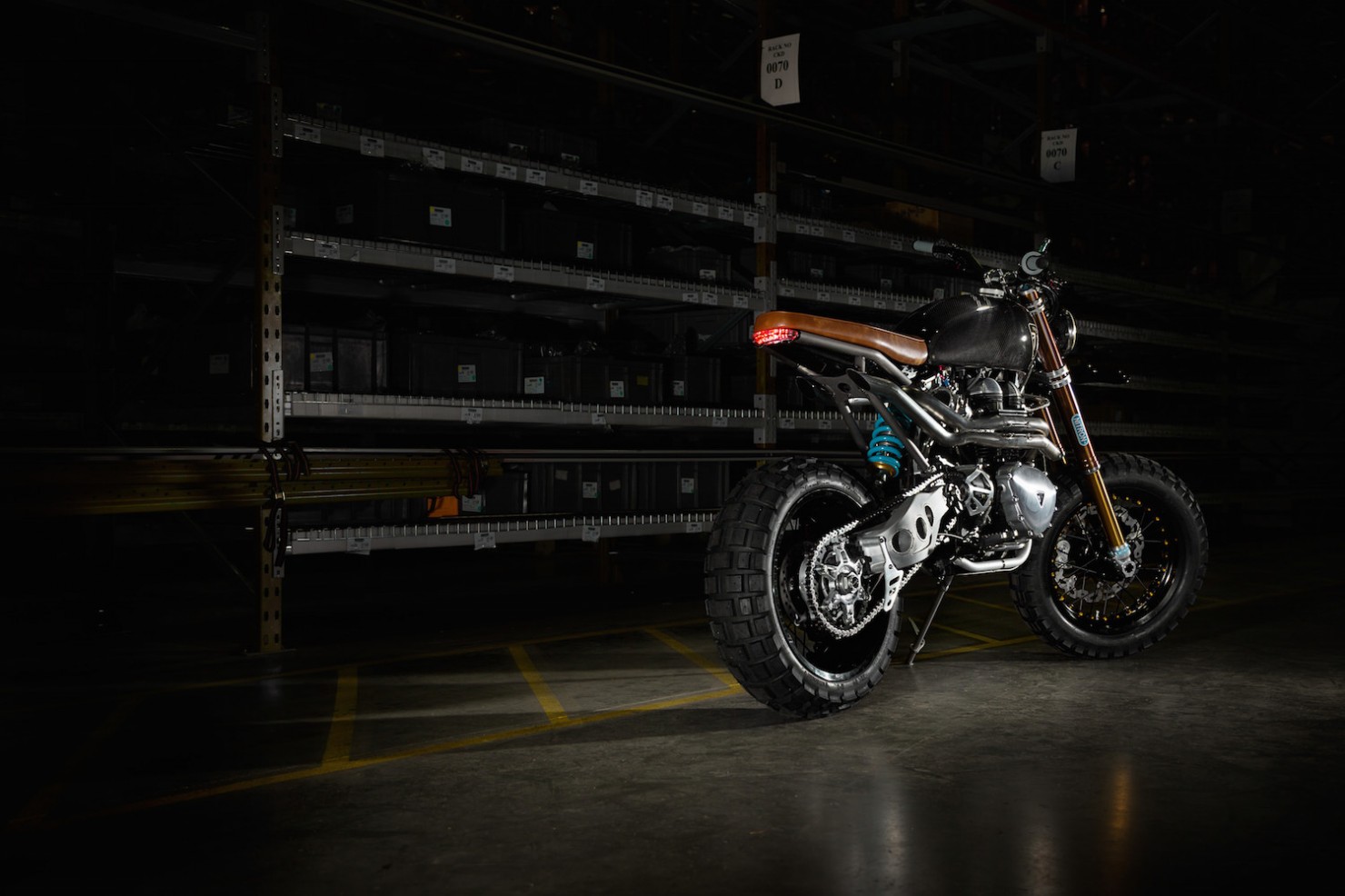 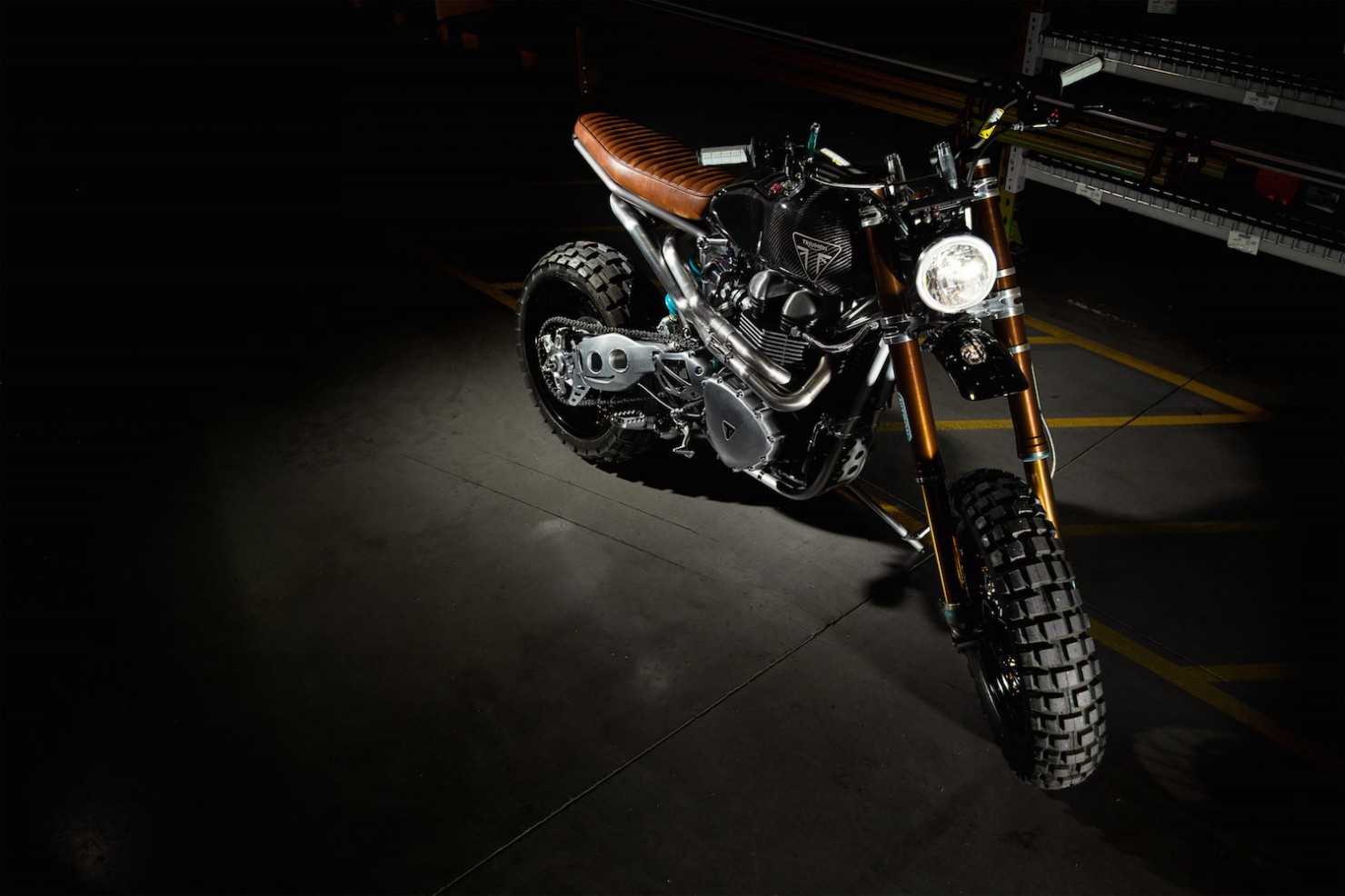 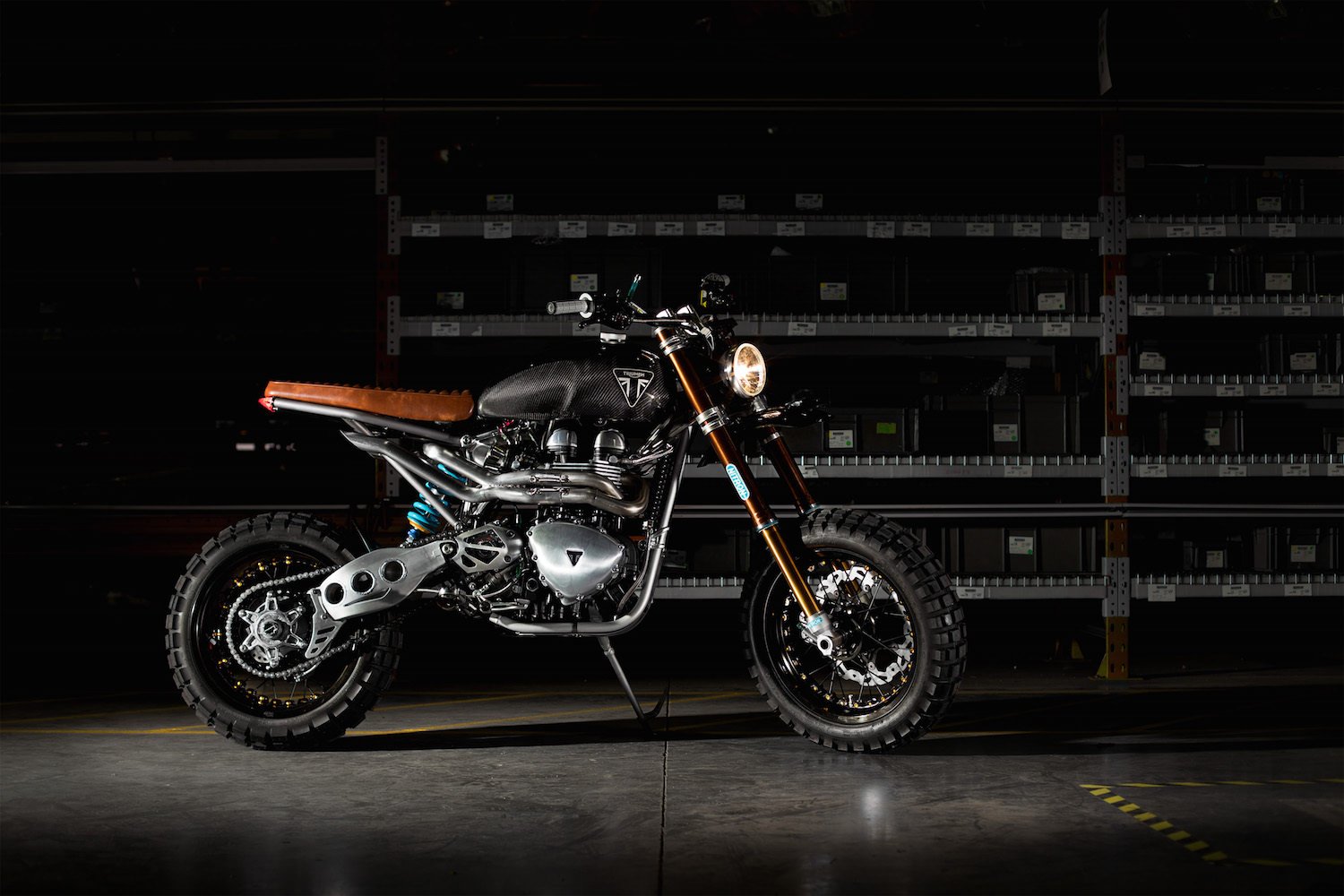