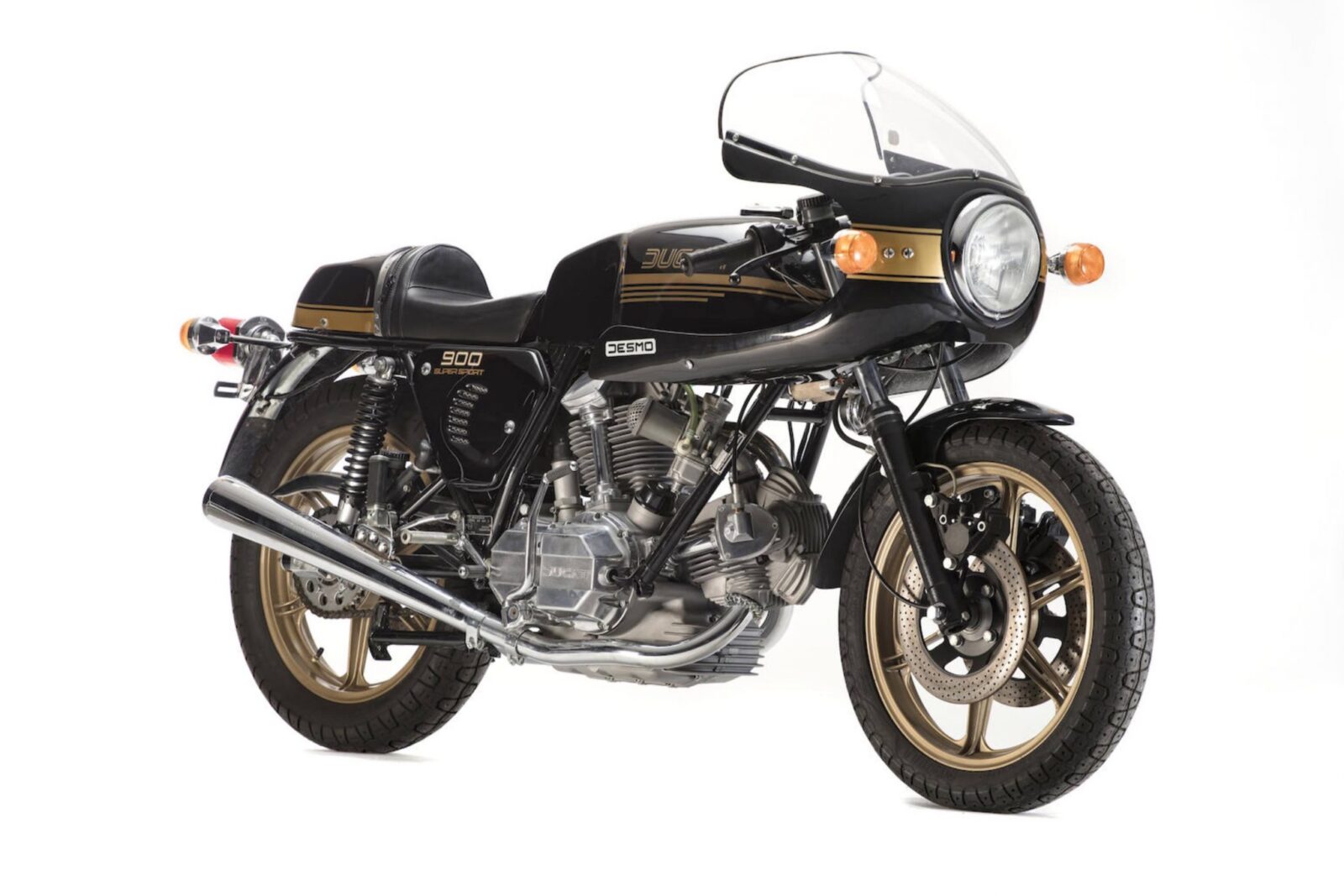 The first generation Ducati 900SS was the successor to the bike that saved Ducati from oblivion in April of 1972 when Paul Smart won the Imola 200 aboard a 750cc Super Sport prototype, with fellow Ducati rider Bruno Spaggiari finishing second.

The early 1970s were an exceedingly challenging time for European motorcycle manufacturers due to the onslaught of cheaper and more reliable bikes coming out of Japan. The first generation of UJMs (universal Japanese motorcycles) may not have had the handling prowess of their European counterparts but they made up for it by being considerably more consumer friendly – with electric starters, no oil leaks, and almost no breakdowns.

The Italians and Brits were particularly hard hit, and some have claimed that Ducati’s dominant 1-2 finish at the Imola 200 in ’72 reinvigorated the company, and provided the basis for the high-end superbikes they would sell throughout the 1970s and into the early 1980s.

The Arrival of the Super Sports

The road going Super Sport family started out with the 750SS introduced in 1973, its L-twin was essentially two single cylinder Ducati engines joined at the crankcase, with the leading cylinder lent forward to ensure that the rear cylinder received adequate cooling. Each cylinder has an overhead cam operated by a bevel gear, with Desmodromic valves. A pair of Dell’Orto PHM 40mm carburettors fed each cylinder, and power was an impressive 72hp at 9600 RPM, with a 220 km/h top speed.

1975 saw the introduction of the Ducati 900SS, a bike that had been developed with the sole intention of taking the fight to the ever increasing engine sizes fitted to the superbikes pouring out of Japan. Both the 750SS and 900SS shared almost all the same parts in order to lower production costs, the swept capacity of the 900 was actually 863.9cc and the engine kept the same twin Dellorto PHM 40mm carburettors.

As the ’70s progressed the 900SS was slowly improved, the right side shifter switched to the left to meet US regulations, the kickstarter was improved, crank strength was upgraded, electrics were significantly de-bugged, and engine timing was improved.

In 1979 the 900SS received a distinctive black paint job with gold accents as an appeal to the British market, the spoked wheels also disappeared in favour of cast Campagnolo wheels. Over the next few years the 900SS was transitioned into the Mike Hailwood Replica, and was eventually replaced by the S2.

The bike you see here is a much sought after 1979 900SS, it benefits from all the upgrades first seen in the 1978 bike, but also has the popular black and gold color scheme first seen in 1979.

With just 20,443 kilometres on the odometer, this fully-restored 900SS has completed just 5 kilometres for shakedown purposes since its restoration was completed. It’s due to be auctioned by Bonhams on the 23rd of April with an estimated hammer price of between £18,000 and £24,000 – which is actually pretty reasonable for what is essentially an as-new Ducati 900SS. 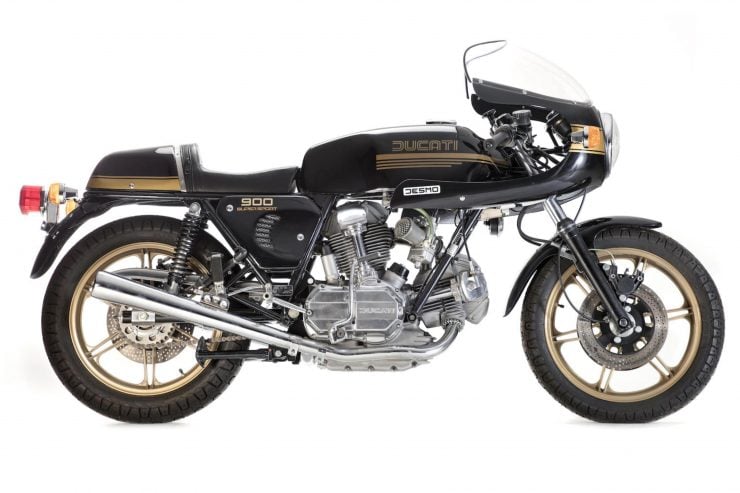 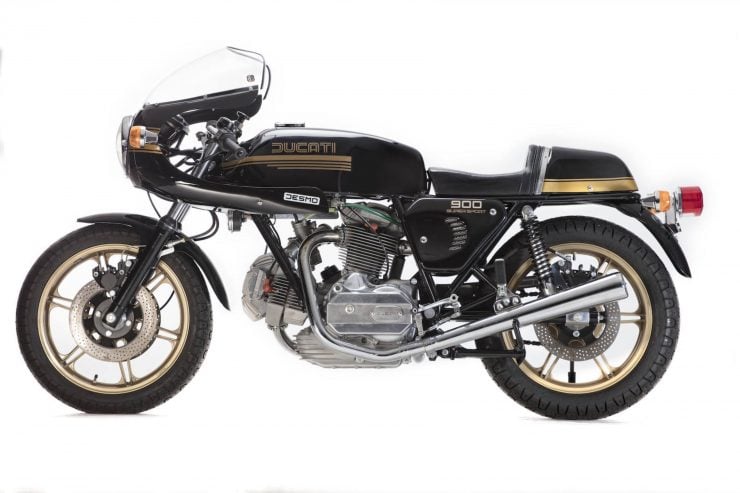 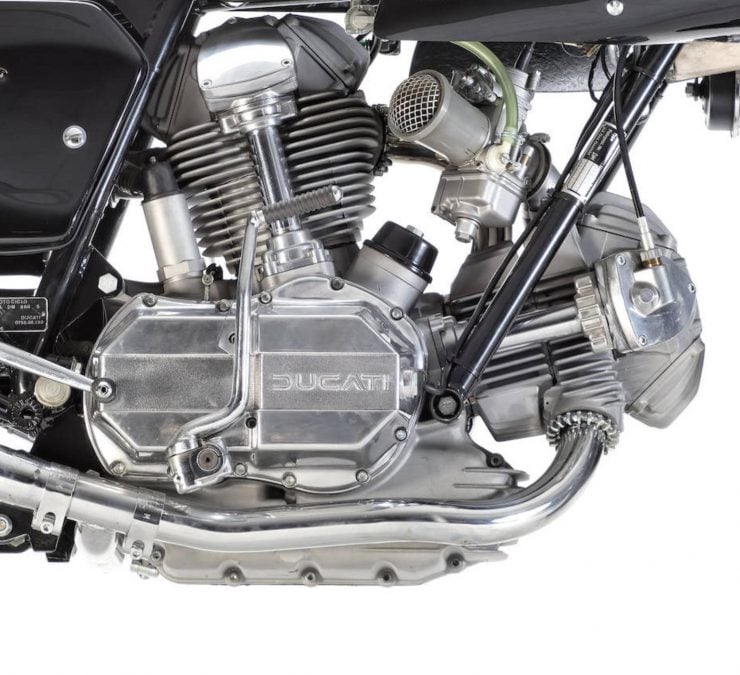 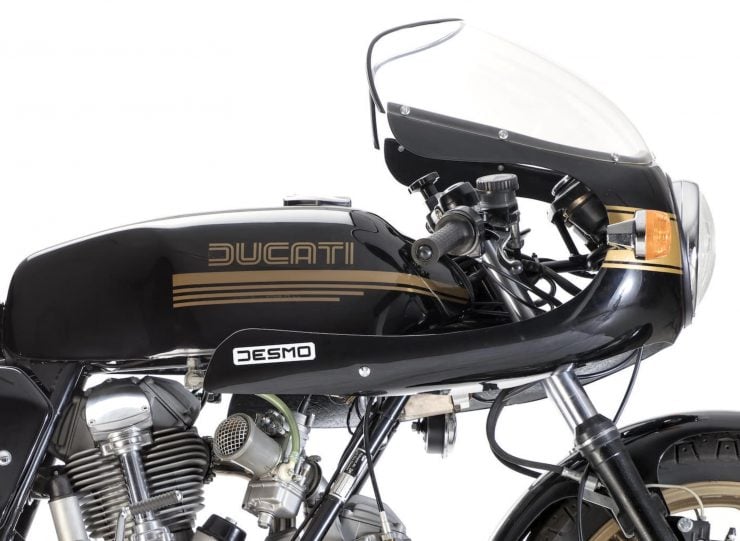 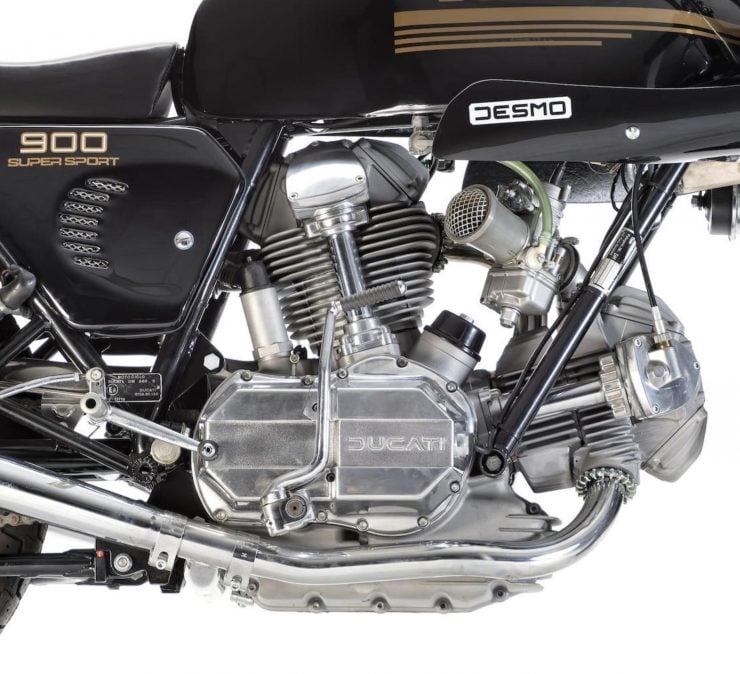 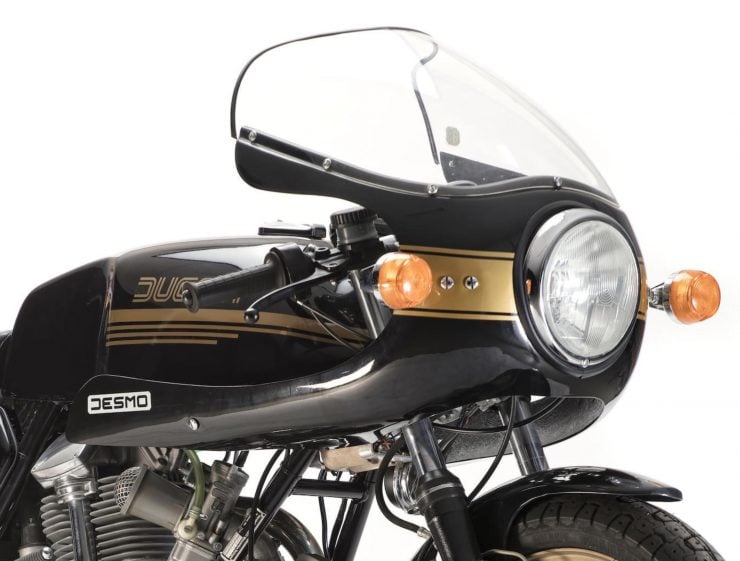 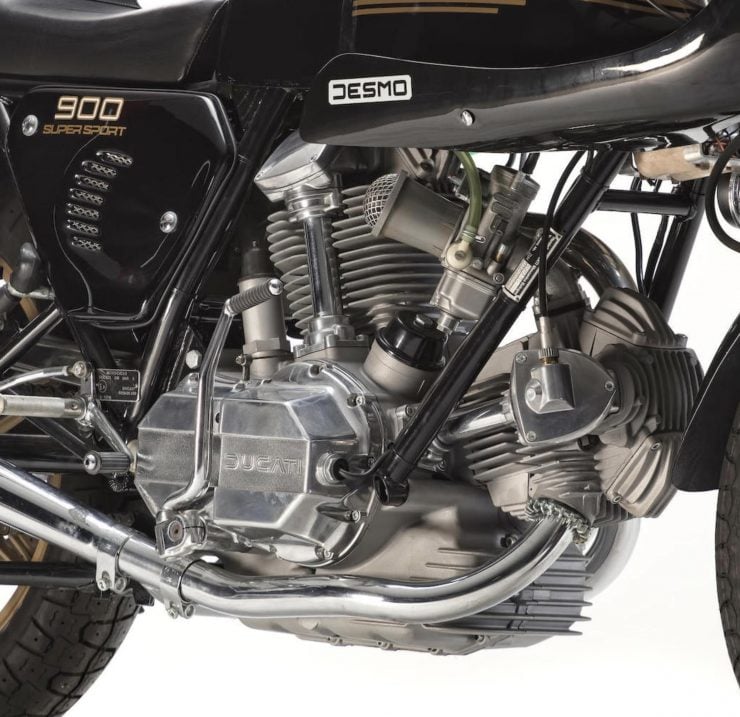 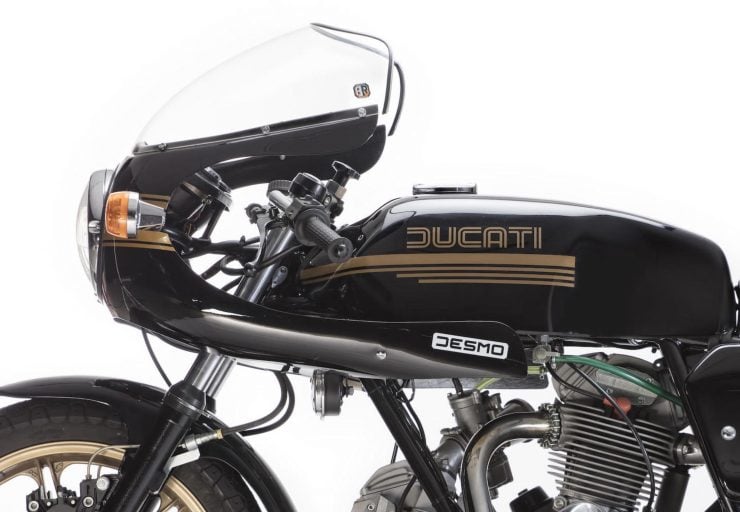 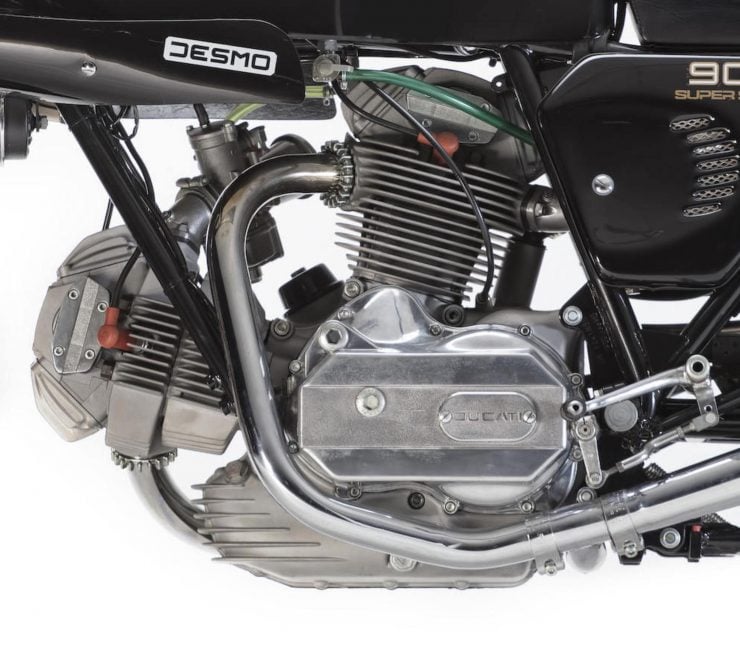 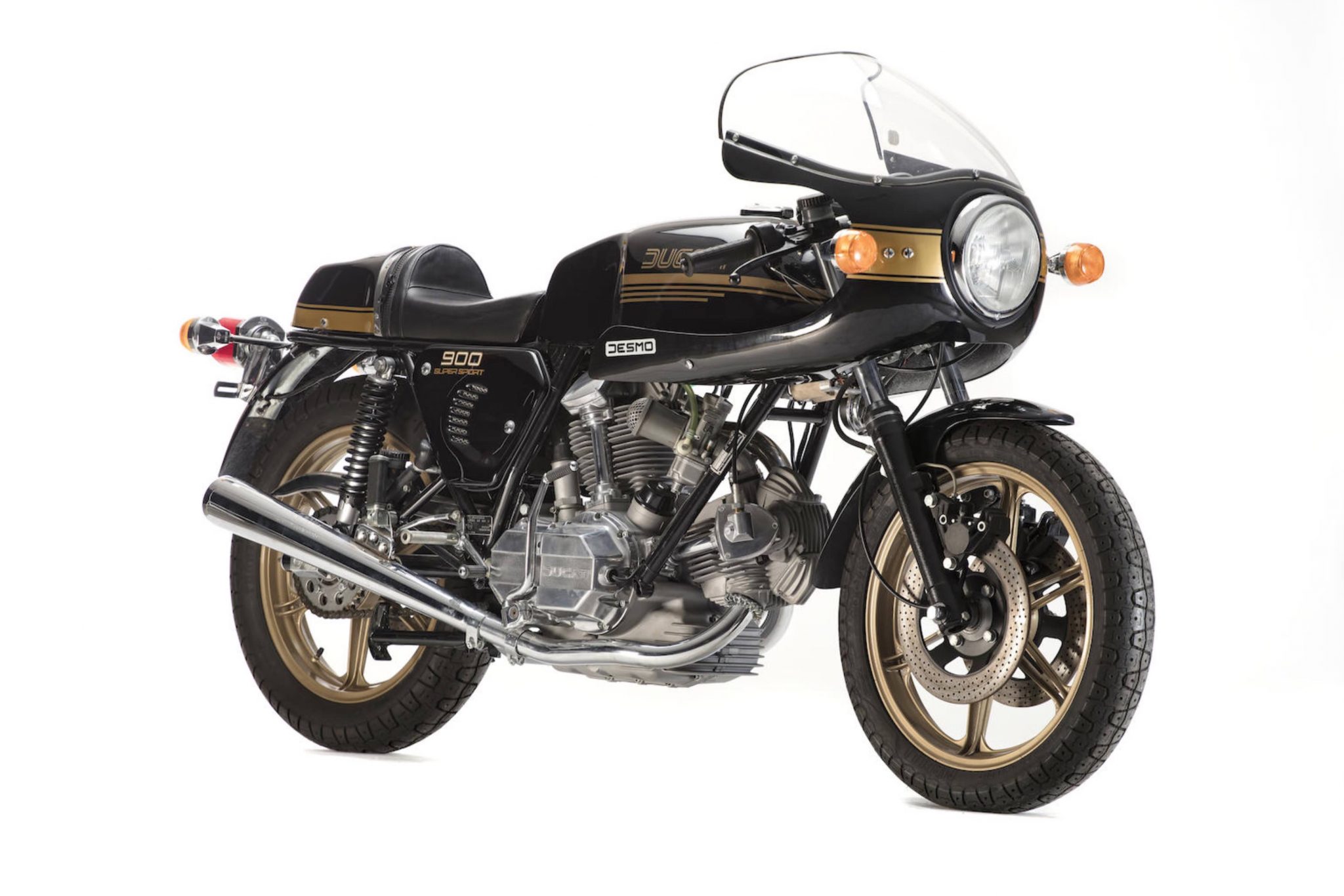