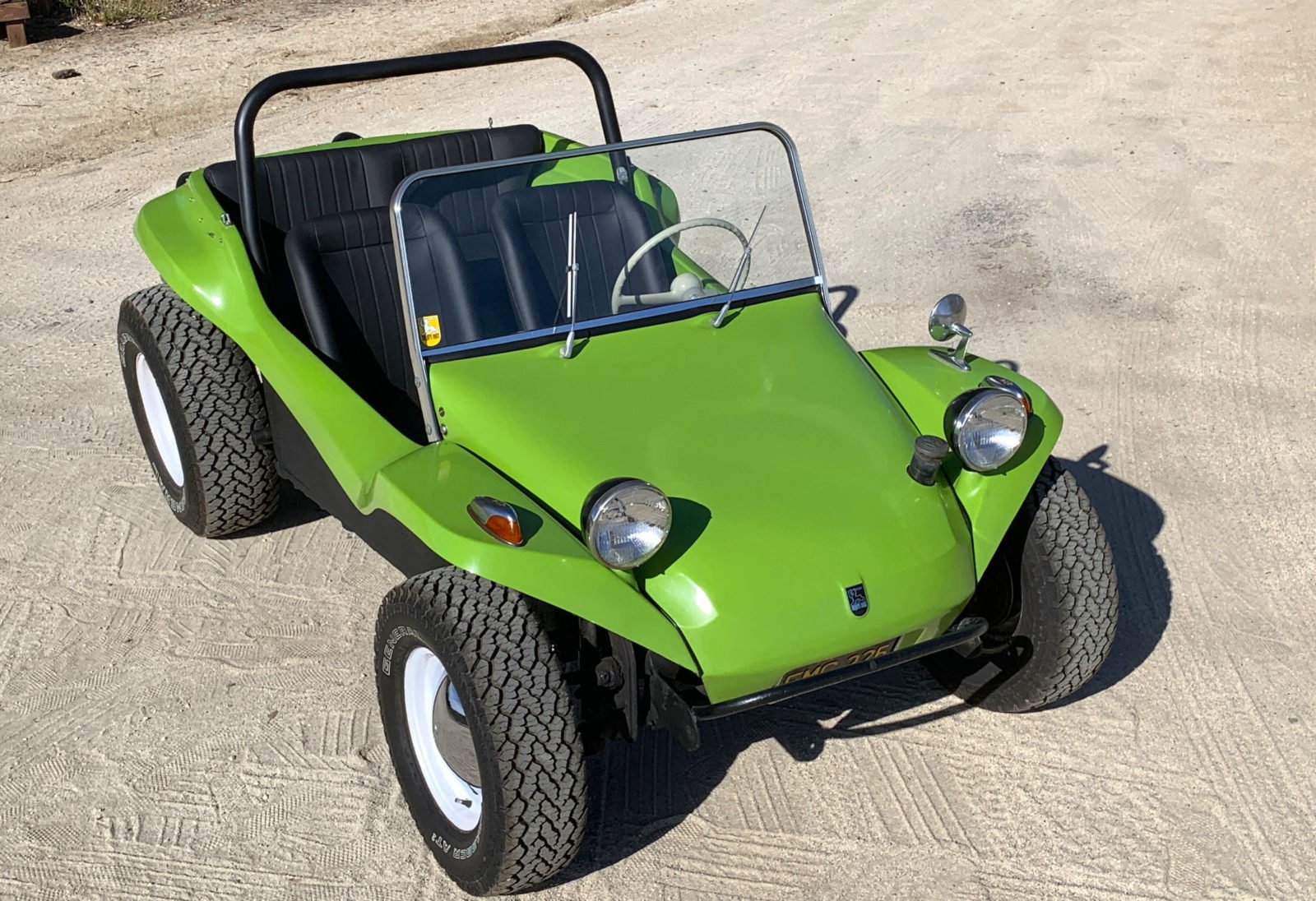 This 1966 Meyers Manx is said to be one of the earliest “pre-tag” Manx 1 bodies known, and one of the first 200 Meyers Manx buggies that were manufactured.

The Meyers Manx was developed by Bruce Meyers in the early 1960s. He designed a fiberglass body that was fitted to a shortened VW Beetle floorpan, creating a highly capable dune buddy that would go on to win the first ever Baja 1000 (then known as the Mexican 1000) in 1967.

Long before Bruce Meyers made a name for himself as the designer of the Meyers Manx beach buggies he was experimenting with the use of fiberglass to build lightweight sail boats. As a surfer he had also seen fiberglass being used to transform the world of surfboard design and manufacturing. 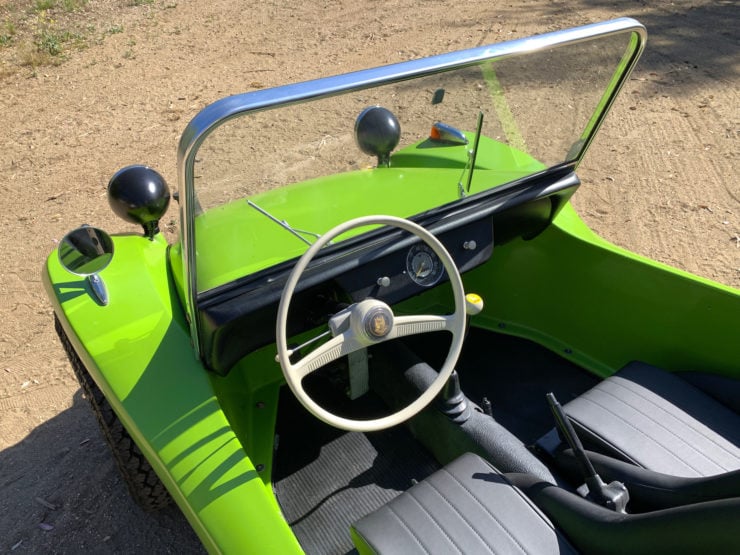 The spartan interior of the Manx helped keep weight low, and it made it nice and easy to clean out all the beach sand that would inevitably collect inside.

With all of that in mind it probably shouldn’t be surprising that he would turn to fiberglass as his material of choice when he set out to build an off-road racing dune buggy.

The vehicle he created became a global phenomenon, instantly recognizable to countless millions of people around the world as the “beach buggy.” He also became possibly the only amateur car designer in history to design a true automotive icon – on par with the Mini, the Beetle, the Jeep, the Land Rover, and the Porsche 911.

It wasn’t long before copycats started ripping off the Meyers design, he had patented it but a judge controversially rescinded his patent claiming it was unpatentable. This decision has been widely panned in the years since, as the Meyers design was entirely unique and clearly needed patent protection.

The B. F. Meyers & Co. would cease operations in 1971, unable to keep up with the slew of cheap copies flooding the market. Fortunately the story doesn’t end there, in the year 2000 Bruce Meyers revived the company and reentered the market with a number of upgraded models.

Above Video: This episode of Jay Leno’s Garage features Bruce Meyers himself discussing the history of the Manx and its importance for car culture.

Over the next 20 years he would reestablish the company as the preeminent beach buggy kit manufacturer and when he passed away in 2021 he left behind a thriving company that is now pursing updated designs and even a 100% electric Manx.

The Meyers Manx is likely one of the easiest kit cars to build in history. It requires a shortened Beetle floorpan with its engine and suspension intact, onto this you bolt the fiberglass body and its parts, then you add the interior and the car is essentially done.

This simplicity coupled with the incredible off-road ability of the Manx made it a wildly successful vehicle in the 1960s, particularly when you consider the fact that it was all being operated as a small business out of a relatively small facility in California.

The cleverness of Bruce Meyer’s original design has been studied for decades, he used a lightweight fiberglass tub that was designed with compound curves to offer good rigidity.

The large wheel arches allow larger wheels and tires to be fitted as well as plenty of suspension travel, the open back ensures the air-cooled engine has enough air flow, the low nose gives excellent visibility of the terrain ahead, and the doorless open-topped design makes it easy to get in and out of. 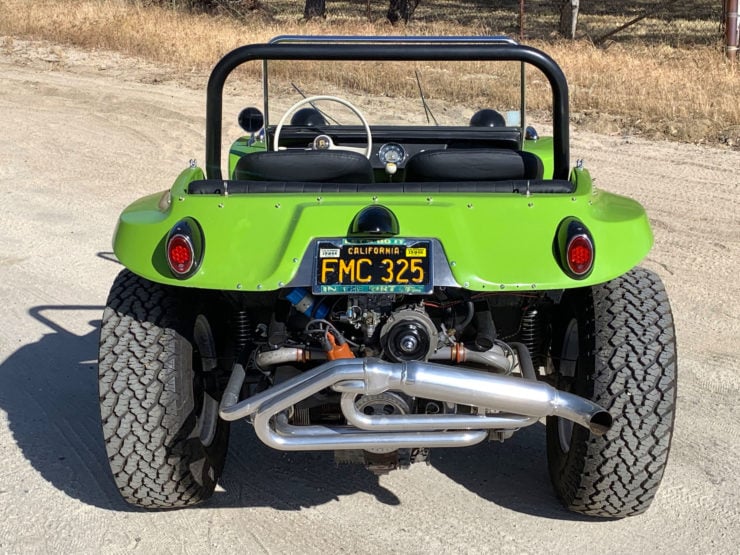 The rear-mounted VW Beetle engine is both simple and lightweight, making it ideal for this application. It also keeps the weight over the rear wheels to assist with traction when off-road.

In the 1960s you could order your own Meyers Manx kit for just a few hundred dollars, you’d then buy a cheap Beetle, shorten the floorpan, and bolt it all together. The Manx became beloved by everyone from surfers and boulevard cruisers to desert racers and off-road explorers.

The Manx you see here is considered highly collectible as it’s one of the earliest “pre-tag” Manx 1 bodies to have survived, and amazingly it still has its original gel coat from 1966.

It’s based on a 1959 Beetle floorpan and power is provided by a 1.6 liter, dual port, flat-four Volkswagen engine that has been converted to 12 volt electrics. It’s riding on period correct widened steel Volkswagen wheels with chrome VW logo hubcaps, which are fitted with raised white letter General Grabber all-terrain tires.

The car is accompanied by Meyers Manx registry authentication documentation, and it’s due to roll across the auction block with RM Sotheby’s on June 1st with a price guide of $40,000 – $50,000 USD. 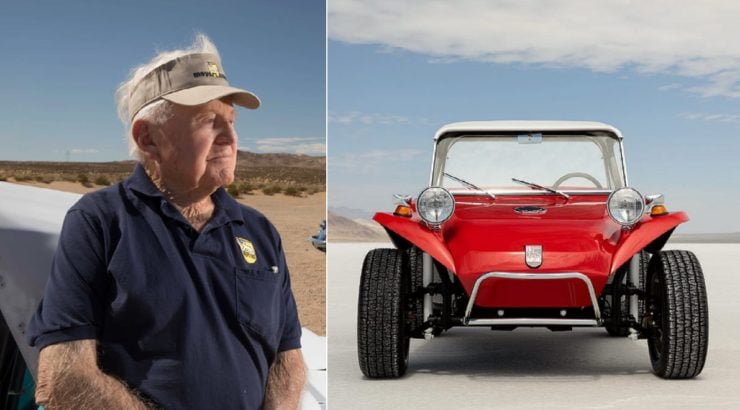 Bruce Meyers, the creator of the Meyers Manx. Image courtesy of Volkswagen. 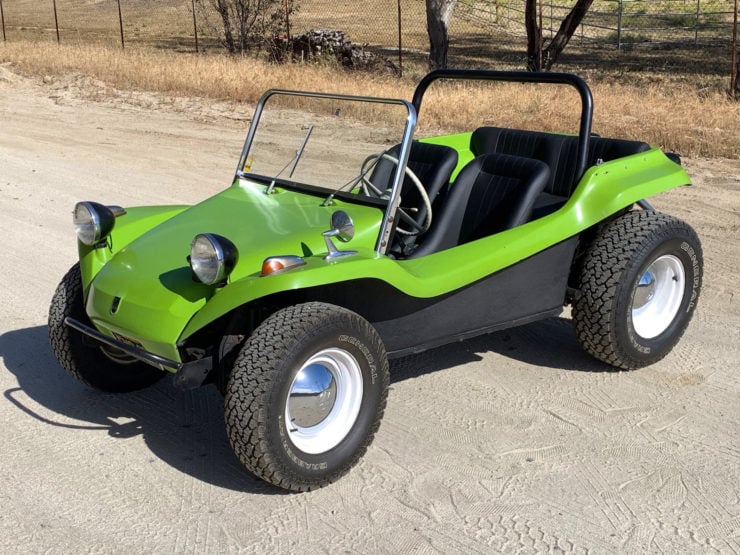 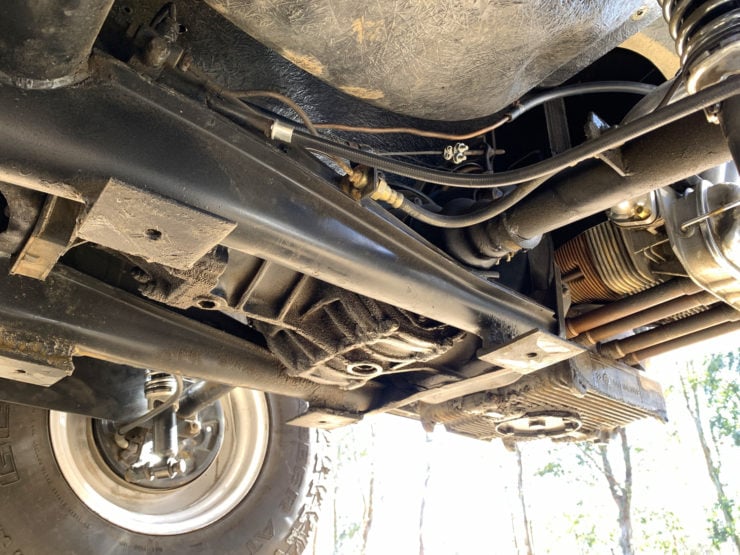 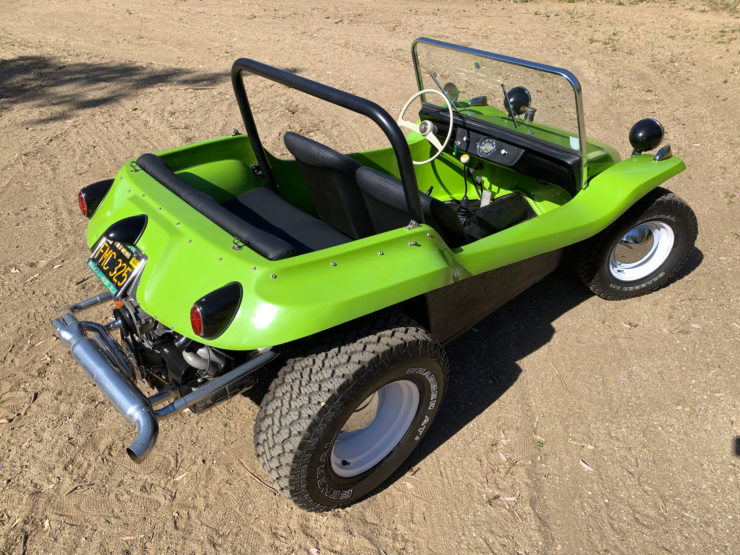 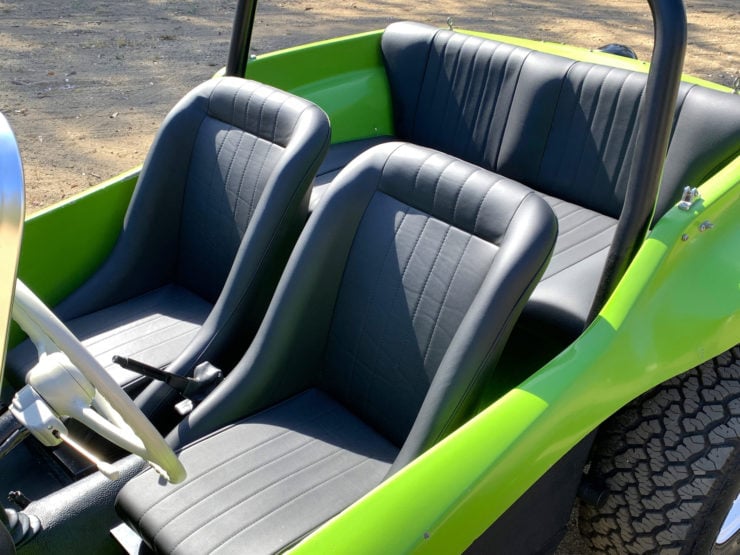 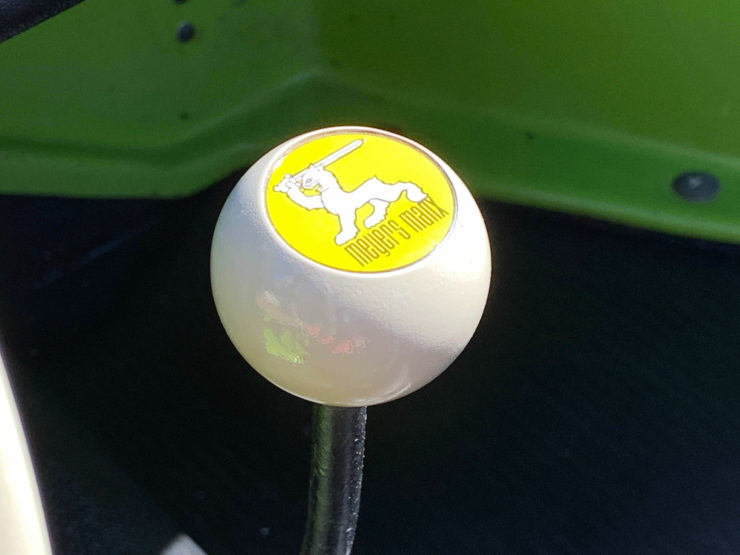 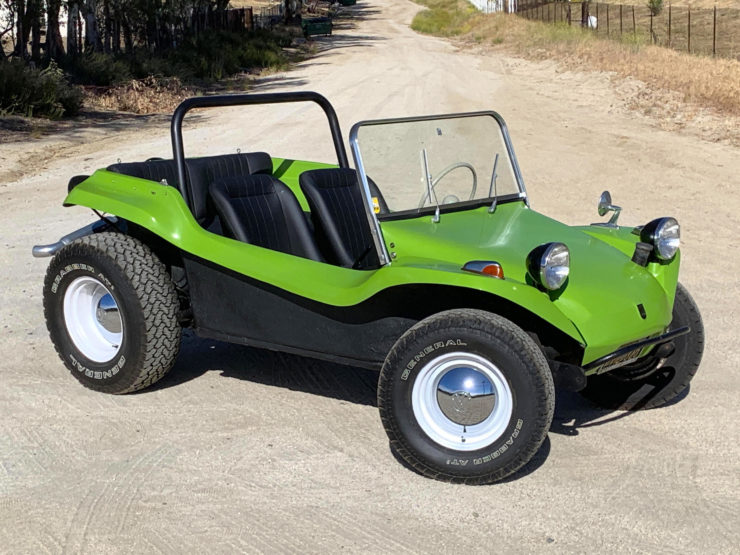 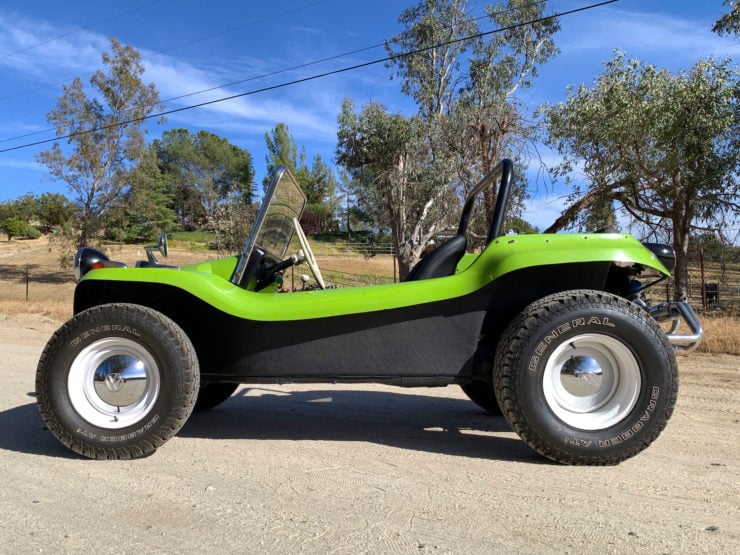 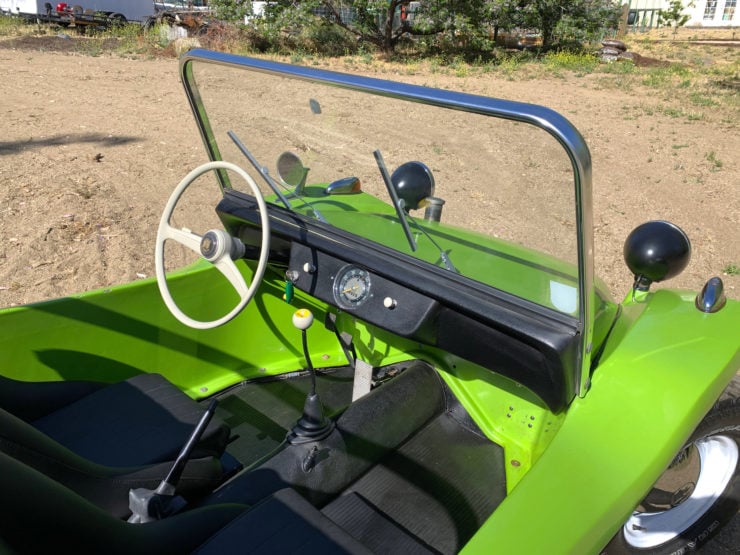 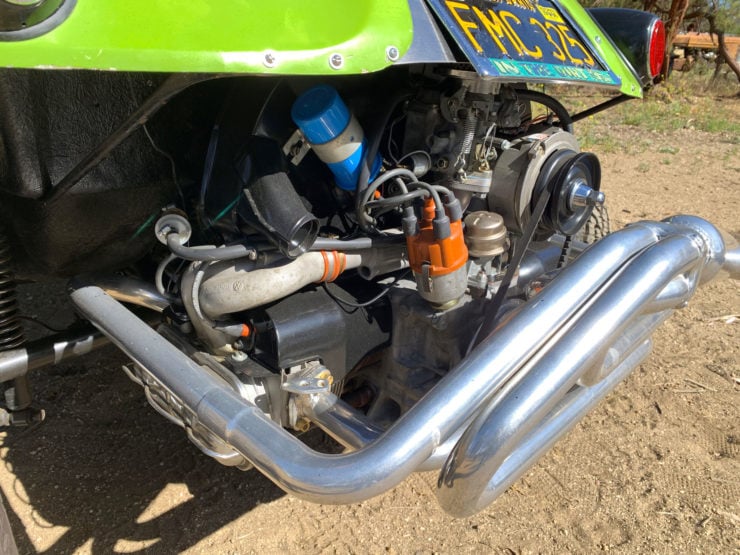 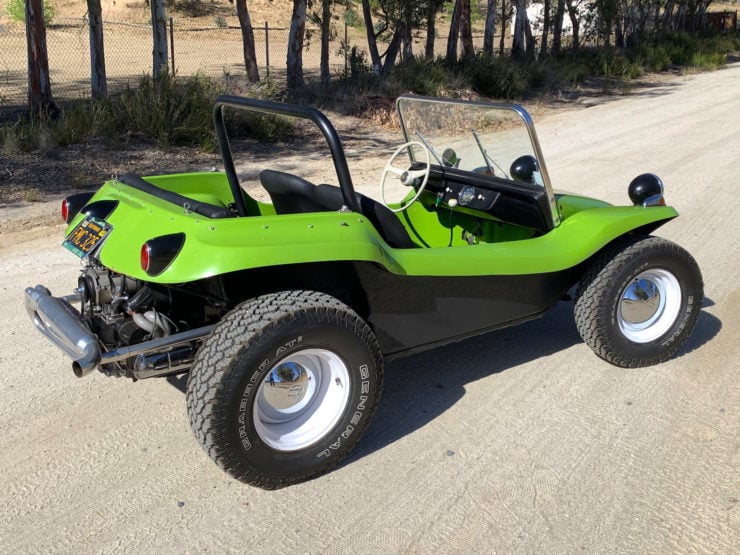