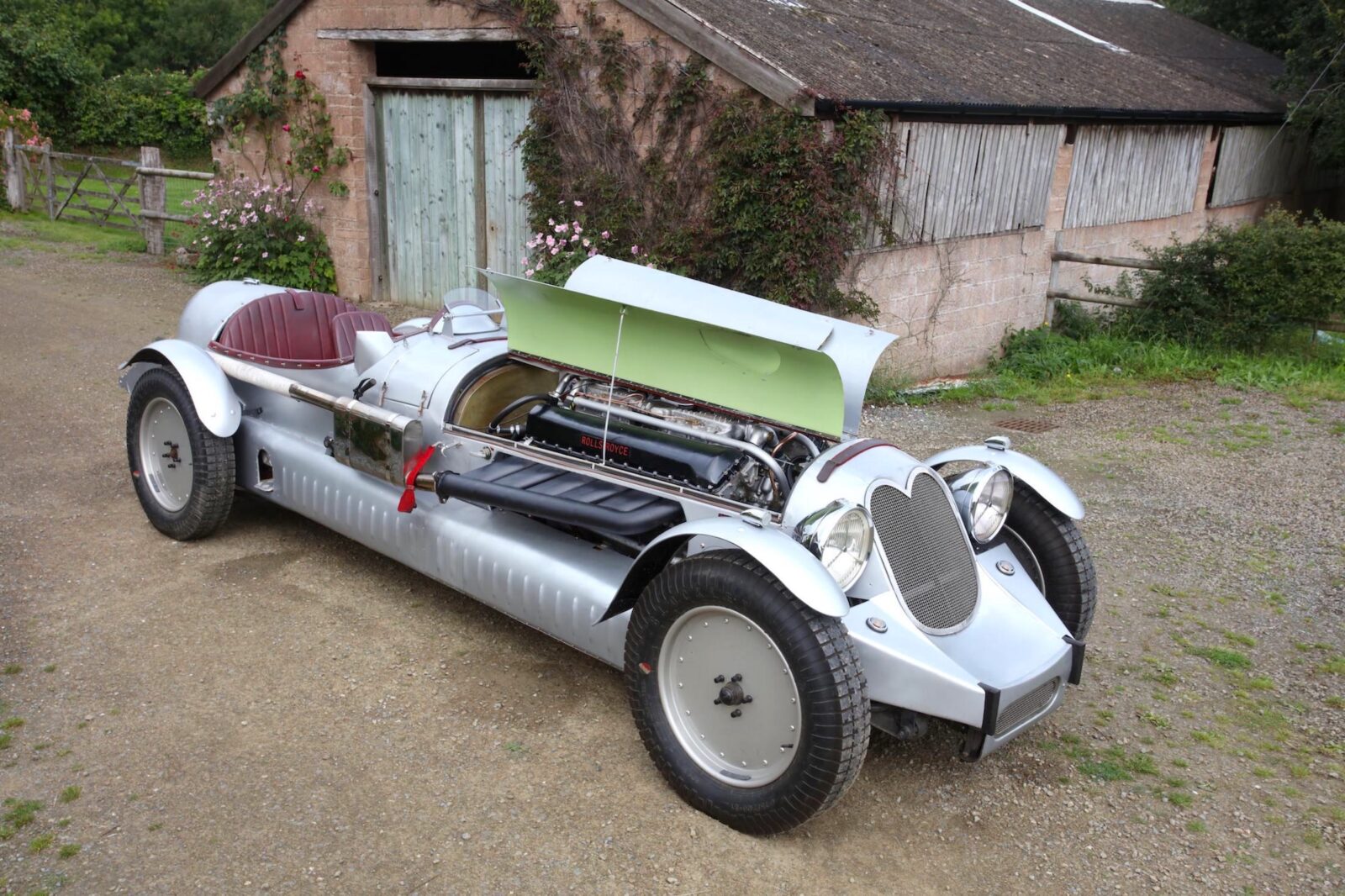 As its name suggests, the Meteor 27 Litre V12 Special you see here is powered by a Meteor V12 – that’s the non-supercharged version of the 27 liter Merlin V12 aero engine from WWII that powered the Spitfire, Hurricane, Lancaster, Mosquito, North American P-51D Mustang (in Packard form) and many other iconic aircraft.

This may be the only time in history that the McLaren F1 supercar and a tank-engined special are ever mentioned in the same breath, but if you take a close look at the seating arrangement in the Meteor 27 Litre V12 Special you’ll note one marked similarity: both the McLaren F1 and the car you see here have a central driving position, with two passenger seats off set to the sides behind the driver.

The development of the Rolls-Royce Meteor engine began almost by accident, due to the difficulty of manufacturing the Merlin engine and its high cost, Rolls-Royce had begun collecting Merlin engines from crated aircraft and refurbishing them. 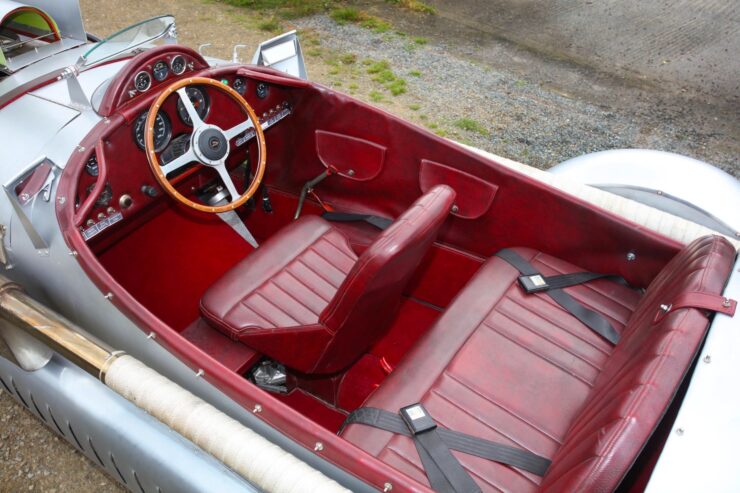 The seating arrangement is reminiscent of the McLaren F1, with a centrally positioned driver and the two rear passengers sitting off to the sides.

These engines were not suitable for re-use in aircraft for obvious safety reasons, however Rolls-Royce executive W. A. Robotham quickly realized that a detuned, non-supercharged version of the Merlin would be ideal for use in tanks. In fact it would increase power and tank speed considerably thanks to the ~1,000 hp output, considerably more than the ~500 hp tank engines then in use.

When the first Meteor engines were installed into the British Crusader tank in place of the original Liberty L-12 engine performance essentially doubled despite the fact that that both engines had the same 27 liter displacement.

This additional power allowed tank designers to add more armor and make tanks safer, and impressively the Rolls-Royce engines were more fuel efficient and more reliable than the engines they replaced.

So revolutionary was the Meteor engine that Duncan Sandys, the Financial Secretary to the War Office during WWII, was noted to have said “I regard the adoption of the Meteor tank engine as the absolute turning-point in the history of British tank development.”

The idea of putting aircraft engines into cars isn’t a new one, but due to the fact that each one is typically built by hand, no two are ever the same. 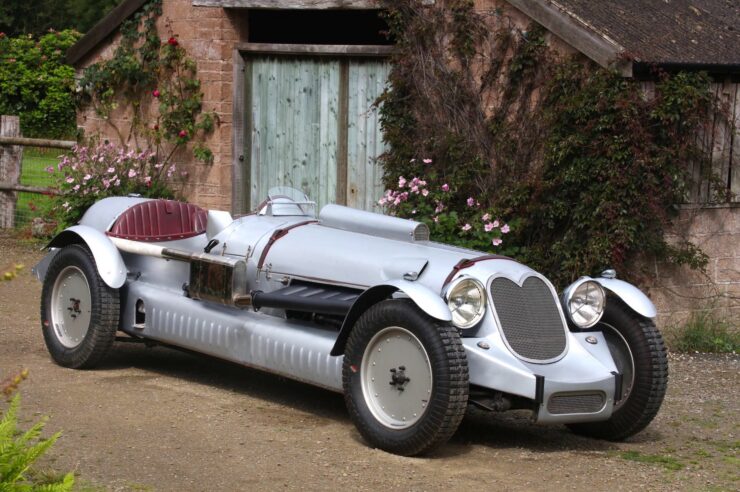 The car tips the scales at almost 5,000 lbs and it has an estimated fuel efficiency of between 5 and 10 miles per gallon.

The most famous car of this type is almost certainly Jay Leno’s Merlin V12-engined car that he regularly drives on the road – he also has an M47 Patton tank-engined car developed by Randy Grubb.

The construction of the Meteor 27 Litre V12 Special began in South Africa in 2001, the man behind the project had visited Robin Beech in Sussex and seen the Handlye Special, a one-off car powered by a non-supercharged 27 liter Merlin V12 engine.

It took him a year to find a Meteor engine, he discovered one in Johannesburg that had been taken from a Centurion tank sent to South Africa in 1952. With the engine secured he then designed a strong double ladder, cross-braced chassis and fitted it with Jaguar XJ12 suspension, brakes, and power steering.

Impressively, when the car’s weight distribution was tested it came in at a near perfect 50/50 front and rear with a total curb weight of approximately 2,200 kgs (4,850 lbs). The car issues a tubular steel framework mounted to the chassis with aluminum body panels fitted to form the body of the car.

In 2016 the owner moved to the UK and brought the car with him, he then had the engine rebuilt by Flight Engineers in Leeds, a company that specializes in rebuilding aero engines. After the rebuild the engine was tested on their dynamometer, it now produces 631 bhp and 1,449 lb ft of torque with an expected fuel consumption rate of between 5 and 10 mpg. 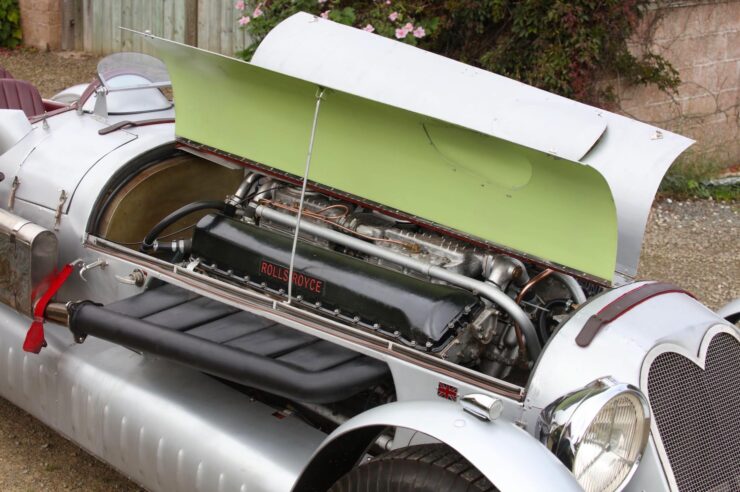 The Meteor V12 has one single overhead cam per bank, two valves per cylinder, and a swept capacity of 27 liters or 1,650 cubic inches.

The gearbox used is an automatic GM TH400 from a Jaguar XJ12, now fitted with heavy duty drag racing internals, with a step-up gearbox designed and built in Cape Town using helical gears.

The car sits on 21″ wheels and Blockley tires, and it is reportedly geared for a top speed of 204 mph – however it’s important to note that the tires are rated for a maximum speed of 135 mph.

The car is now due to be offered for sale with Bonhams on the 5th of September with a price guide of $210,000 to $270,000 USD. It is accompanied by a large trailer with a manual winch, a full sized spare wheel, new unused camshafts still in their box, a spare oil pump, two spare water pumps, wheel spacers, a tonneau cover, and a slew of other useful parts.

If you’d like to read more about the unusual Meteor 27 Litre V12 Special or register to bid you can click here to visit the listing. 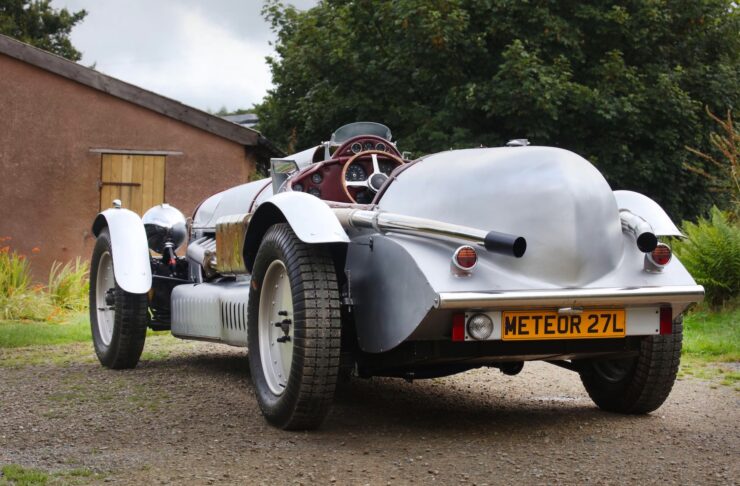 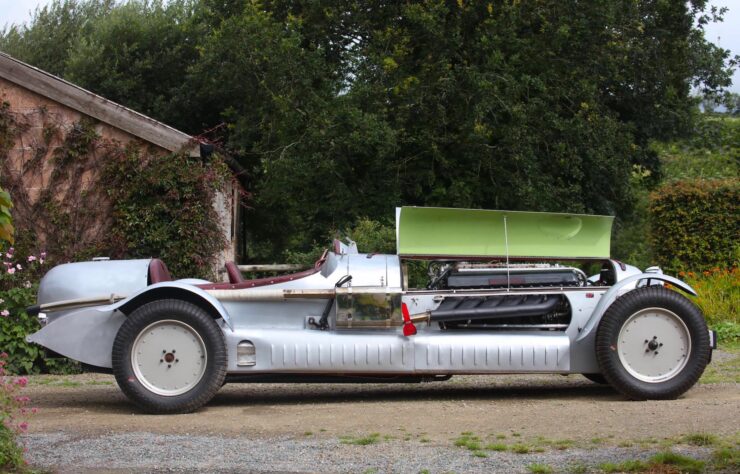 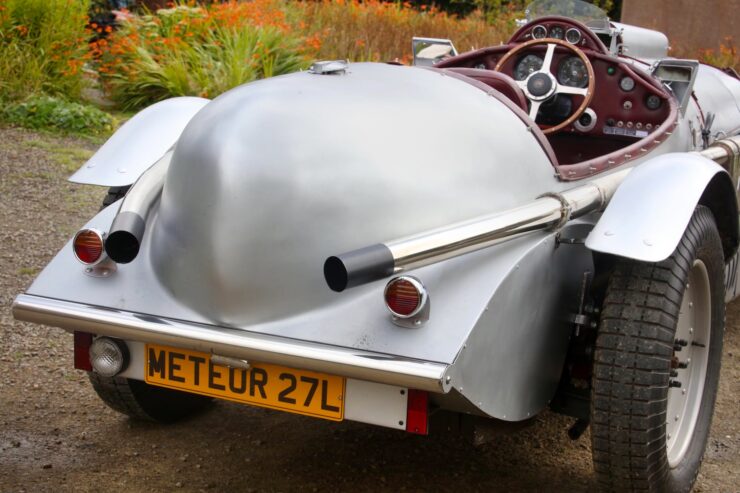 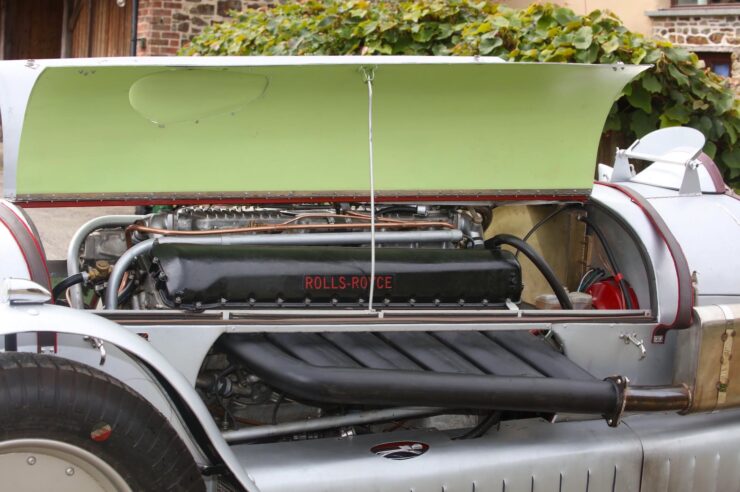 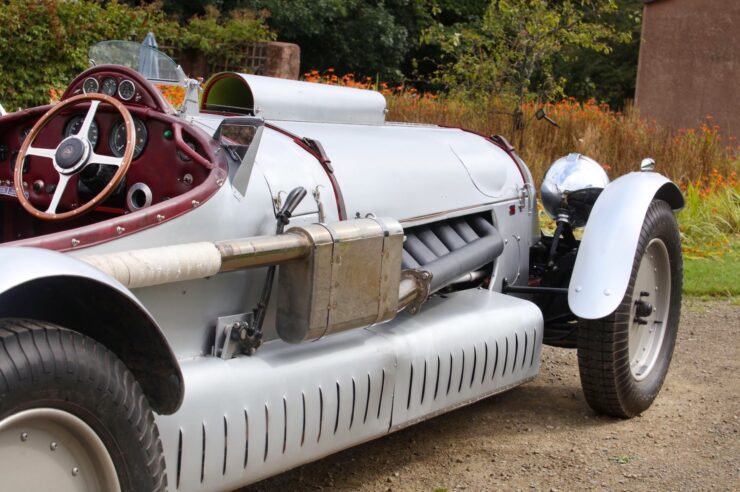 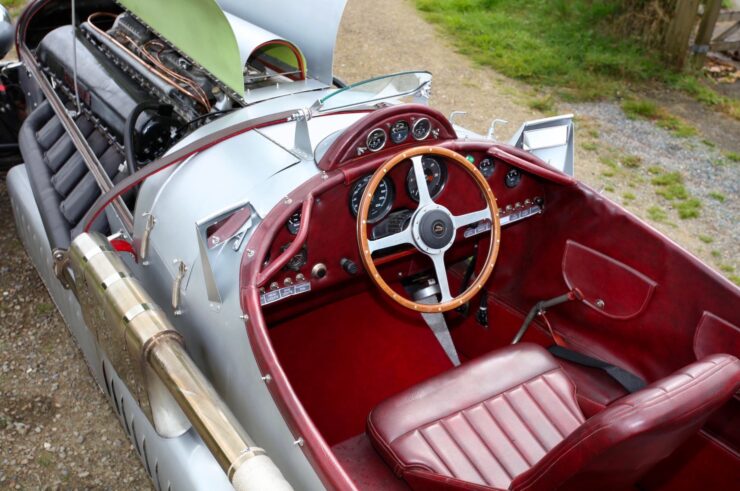 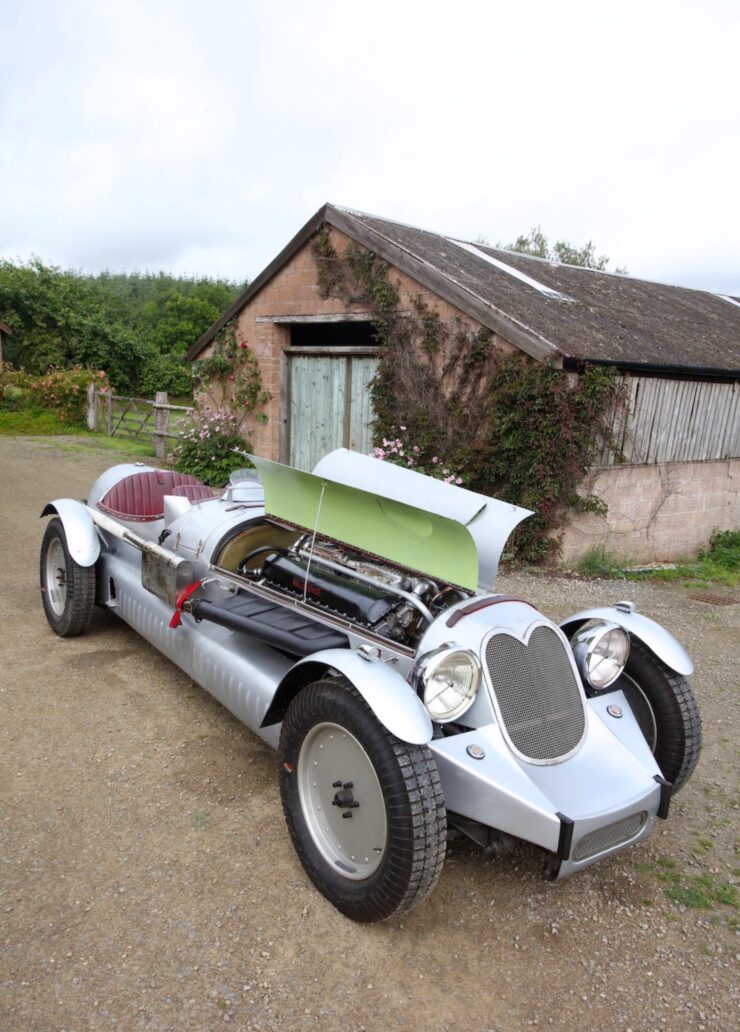 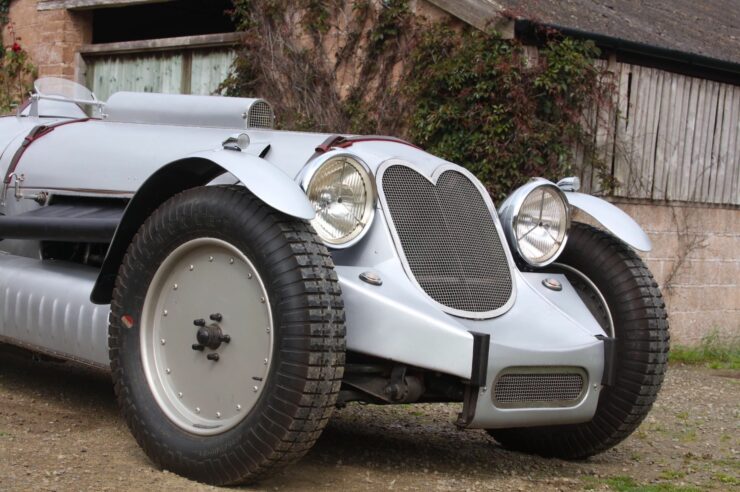 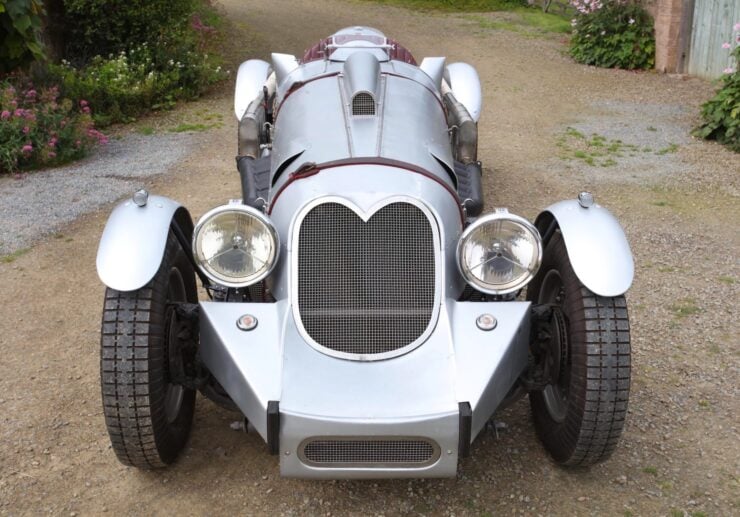 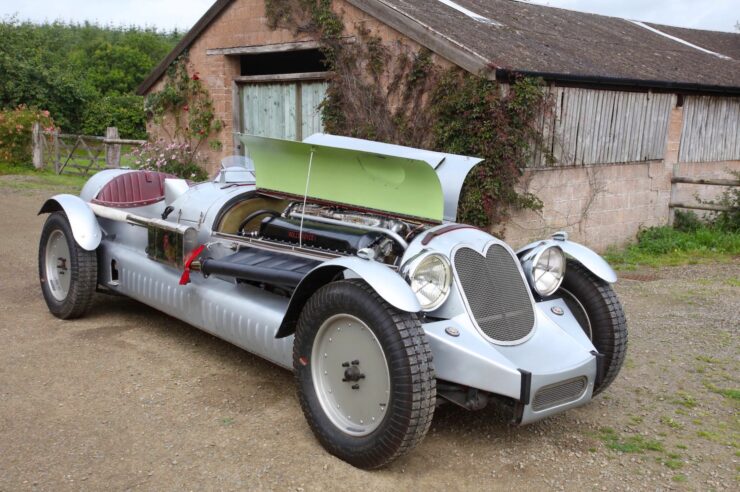 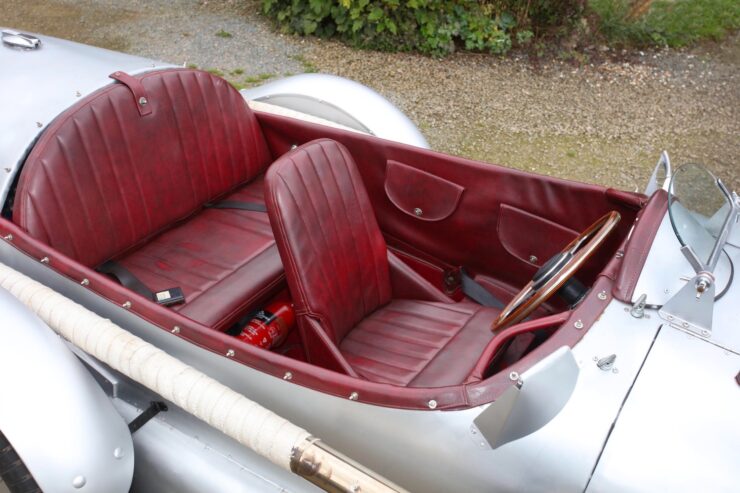 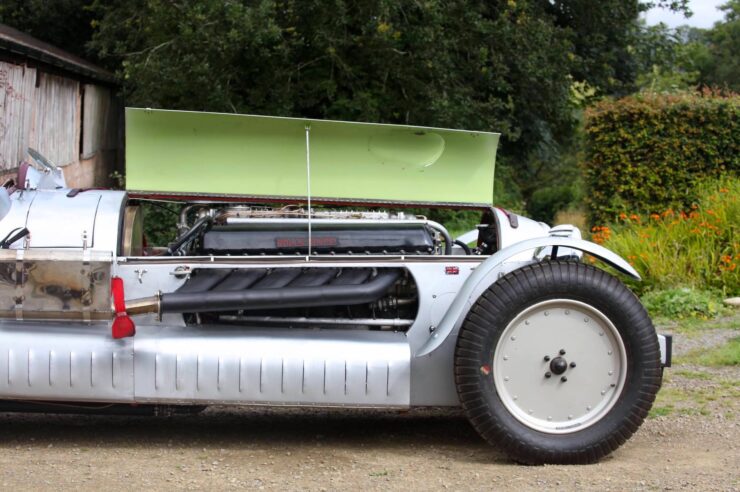