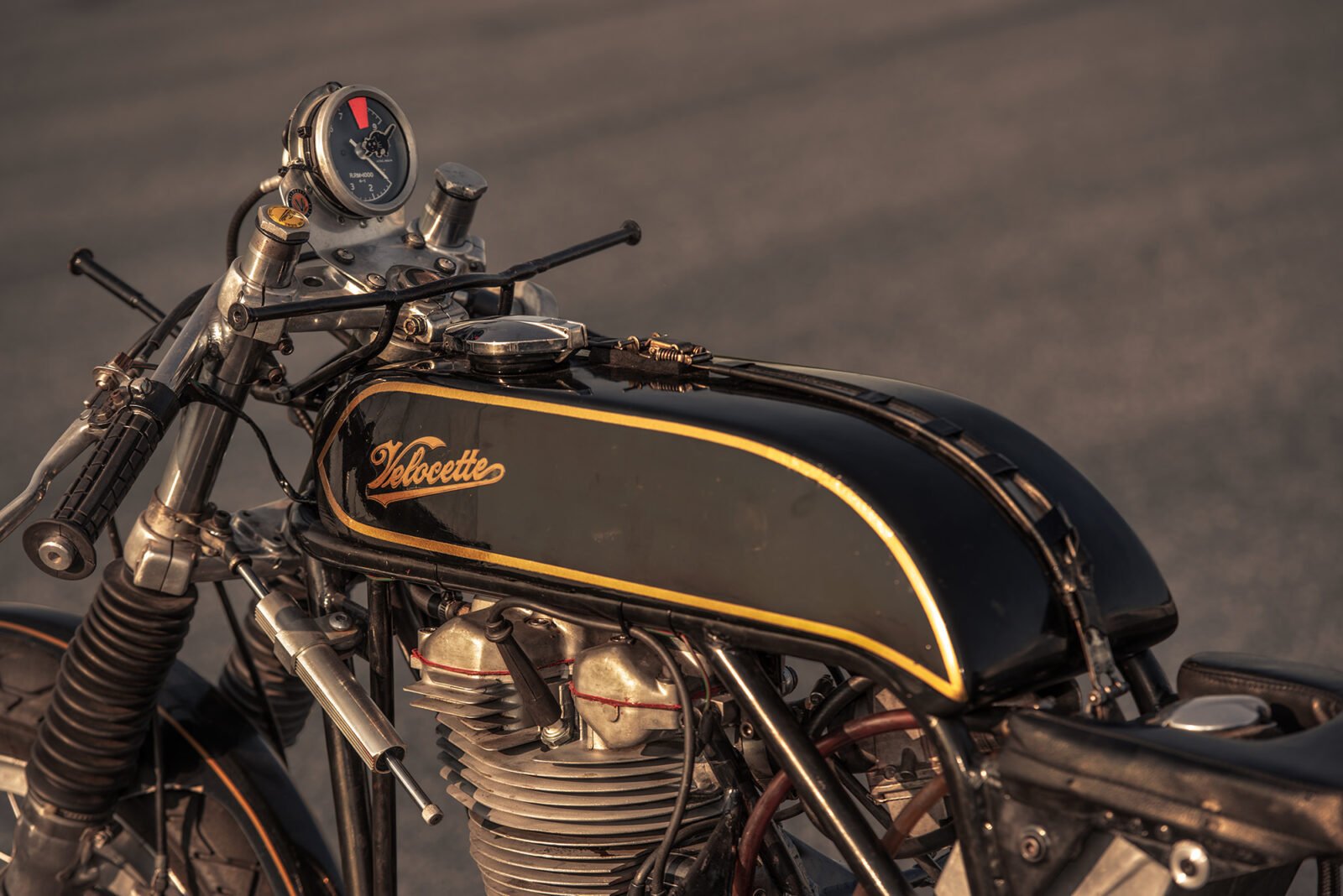 The photography in this article was provided by Douglas MacRae, you can visit his website here to see the prints he has for sale including one of this bike.

The bike you see is the only one of its kind it the world, it’s a Lyster Velocette that was built from mostly British parts, making it kind of a a two wheeled British motorcycle greatest hits collection.

Known in the vintage racing community as the “Alan Taylor Special” this bike was built decades ago using a tubular steel frame built by Colin Lyster and a heavily modified 1964 Velocette Venom 500 engine.

Alan was a long time racer in the “Continental Circus” race scene of Europe and a former employee of the original McLaren race team. He was living in Canada at the time and bought one of the six Colin Lyster frames that had been imported by Canadian Norton Manx expert Tom Pope.

These Lyster frames are highly sought after as they provide excellent rigidity without a weight penalty. The frames a tubular steel duplex cradles with some additional reinforcements, they’re ideally suited to big singles like the Norton Manx engine or the 500cc thumper from the Venom.

Frame-builder Colin Lyster was a motorcycle racer who came to fame as a motorcycle innovator in the 1960’s, particularly in the design of early disc brake systems and race frames for various marques, eventually setting up shop in New Zealand. 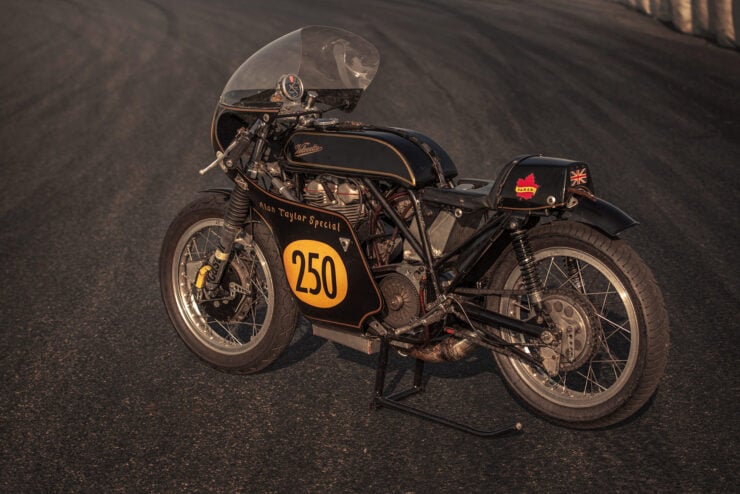 Above Image: The Lyster Velocette tips the scales at just 122 kgs.

Back in the mid-20th century it was big singles like these that were proving dominant on race tracks in Europe and around the world. They combined good reliable power output with low weight, and engineers of the period had become experts in extracting every last fraction of a horsepower out of them.

There’s a large modern day vintage racing scene that keeps these bikes and their riders busy, with many traveling across the country or around the world to compete.

The Lyster Velocette shown here was built from the get-go to be a race bike, it’s not street legal and it was never intended to be. The engine was built up from scratch with titanium valves, BSA Goldstar springs replacing the original Velocette hairpin, the main bearings were converted to double rollers and a custom racing cam was ground.

The drive-side flywheel, complete with main shaft, were machined from billet. The carburetor is a period-correct 38mm Amal feeding into the the twin plug head. In a six week building binge, the bike was completed.

Later, after several drive side crankcase failures, a custom, stronger case was cast for the bike which eliminated the problem. 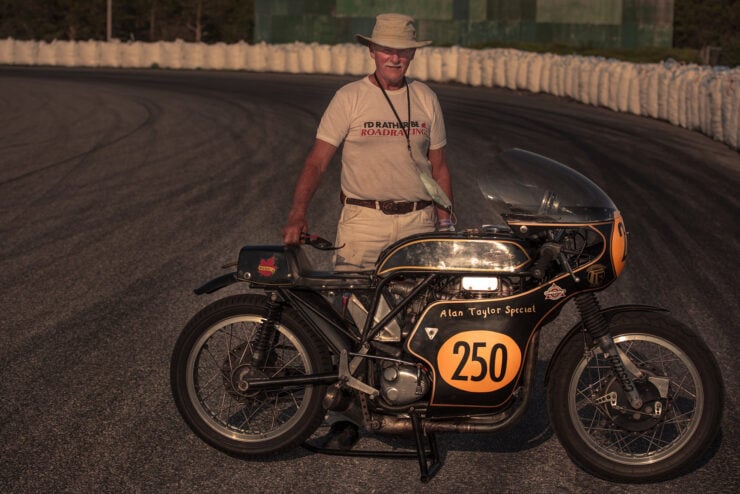 Power was sent back through a belt drive and a Norton clutch into a Matchless gearbox casing fitted with a Quaife 5-speed gear cluster. The front end was sourced from a Norton but the original brake was replaced with a Suzuki four-leading shoe drum from a GT750, and a Triumph drum was used in the rear.

The final weight of the completed bike is 270 lbs (122 kgs), this combined with the significantly increased engine output meant it was a fast bike – but after building it Alan Taylor felt he might be a little too old to ride it, so he entrusted it to talented racer Gary McCaw who competed successfully on the bike through the 1980s and 1990s.

Now getting long in the tooth himself and looking for someone to race the bike, Gary decided to let a long time family friend’s daughter, Holly Varey, try the bike out. She had already raced Gary’s Ducati 250 with good results and it was time to try the bigger 500.

She continues to race the bike in the VRRA series to this day – these photos of Holly and the bike were taken at Shannonville Raceway after the season ending 2020 race weekend was done by Douglas MacRae. Scroll down to read Holly talking about her experiences on the bike in her own words. 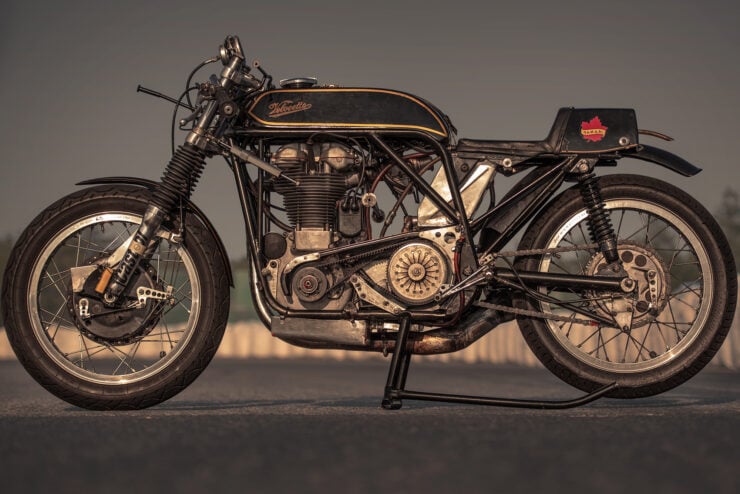 Above Image: With the fairing off you can get a better look at the original Colin Lyster frame.

We chatted with Holly by email while working on this piece and we’ve included her writing about her experiences on the Lyster Velocette below in her own words.

I’ve ridden the Velo for a couple seasons now and enjoy it more with every lap. That’s not just because I’m vibing (literally) more with the bike as experience is gained, but also because with an old, totally custom-built bike like this, there is always maintenance and improvements to be made.

Gary brought the bike out of retirement (out of five or six part bins) late winter, 2019. He’s a man who always has at least one major project on the go and putting the Alan Taylor Special back together definitely ranked in the major category.

There was structural work to be done to the frame before any re-assembly could take place, but once ready to build, Gary had it running in no time. We raced it throughout 2019 and I spent most of the track time getting comfortable on a much larger bike than I was used to.

The 1966 Mach 1 250cc Ducati single I started racing with Gary the season before was lighter and very nimble; a good fit for my 105 pounds. There was a lot to learn on this throaty 500 single, plus some weightlifting to do between races! 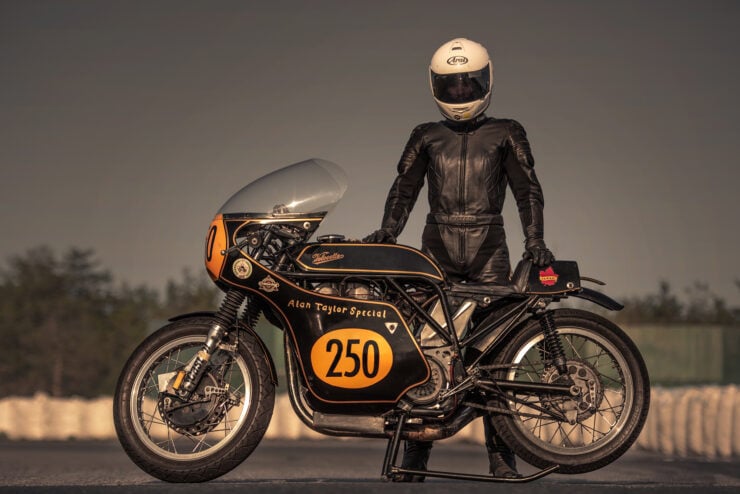 Above Image: Holly with the Velocette shortly after finishing the final race of the 2020 season.

As the 2019 race season began to wrap up, I was getting comfortable – and competitive – on the Velo. Gary and I had worked out a number of bugs and gotten the bike to a place where it was performing consistently and fast. The slight tinge of intimidation I used to feel jumping on the bike had transformed into confident familiarity.

The experience of riding the Alan Taylor Special is probably a bit like paring down a tractor and streamlining it into a beautiful form for the track, if one can imagine doing that. It has loads of low-end torque; grunt to match the rider’s grit; all with an elegance and grace that balances it between aggression and art. The bike has presence, and that is no less apparent when sitting on it.

It creates gravity. It leaps off the line and lunges down the straight with a beautiful tone and resonance. With pep at any RPM, it’s great in a scrap, and has legs ideal for the back straight at Mosport. I’ve not raced any long road courses like we see in the UK and parts of Europe, but I think this bike would be perfect there.

On long, open circuits it gobbles up the track and flows effortlessly through the turns. Mosport, with its old Grand Prix design, is my favourite track for the Velo, and I look forward to getting to circuits in the US before long.

Getting on the track to race anything is a great privilege, and to wring the neck of such a uniquely engineered, finely tuned machine as the Alan Taylor Special is both a privilege and an honour. Growing up at the track, seeing and hearing a big beautiful single has always filled me with excitement.

Sometimes I still can’t believe I get to race such a machine. 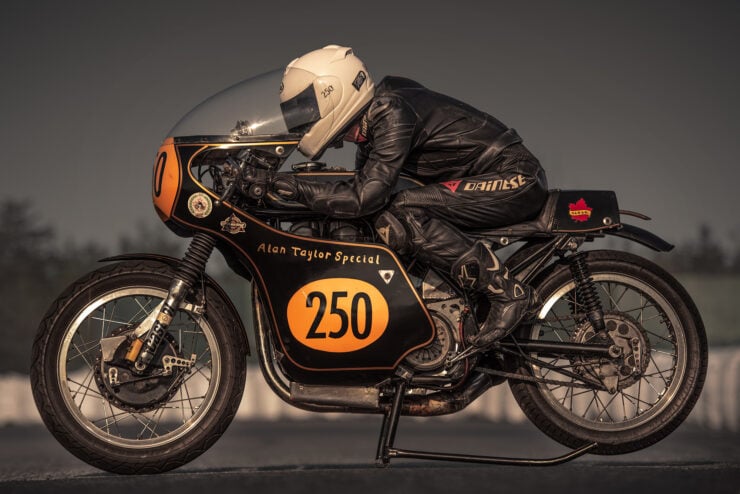 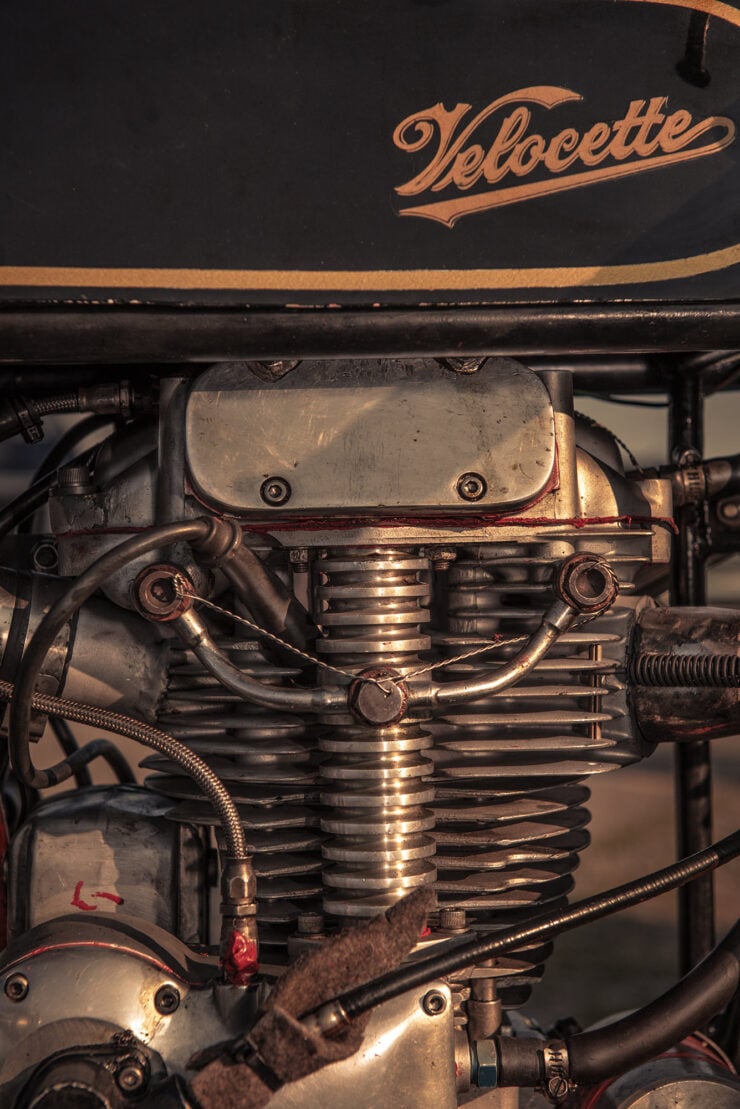 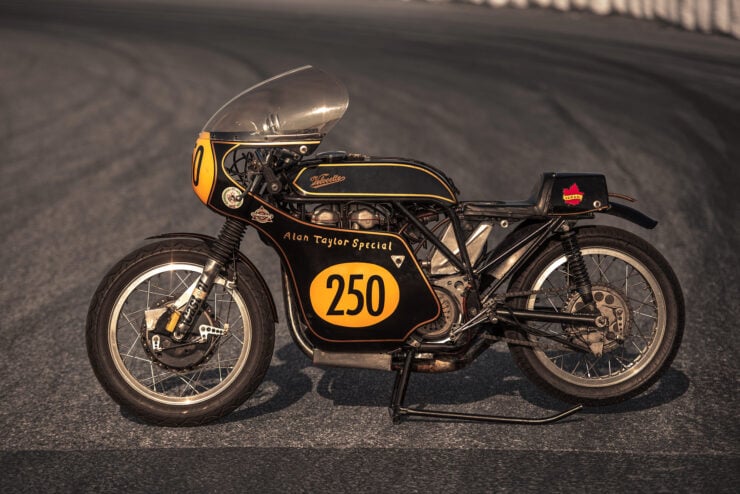 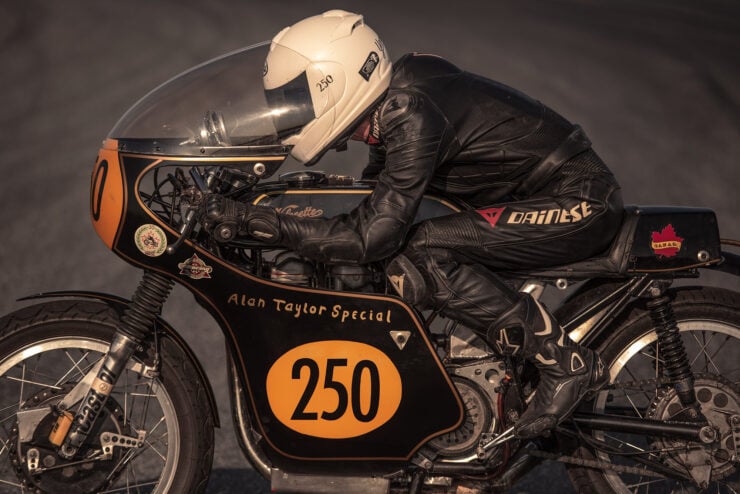 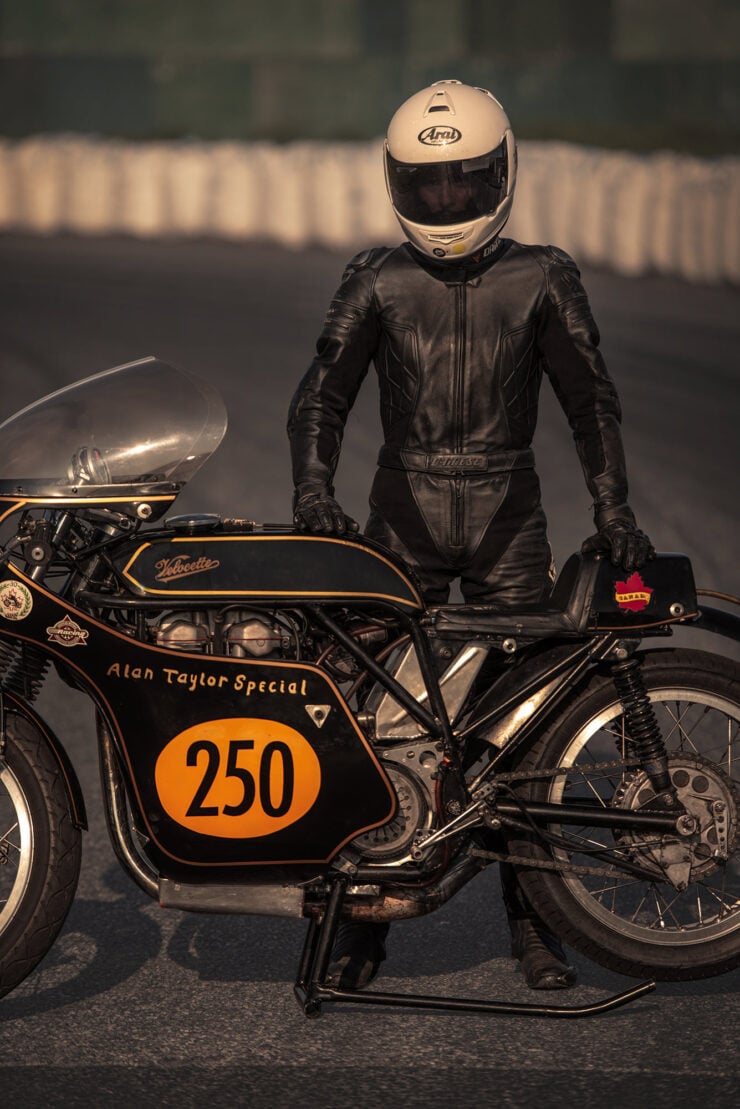 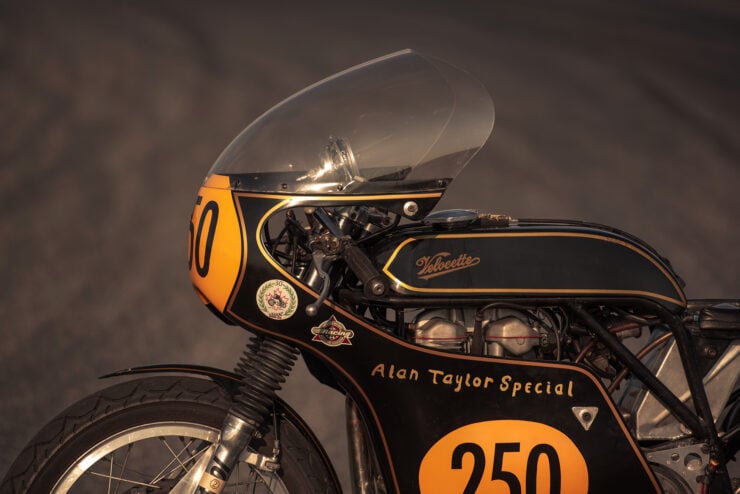 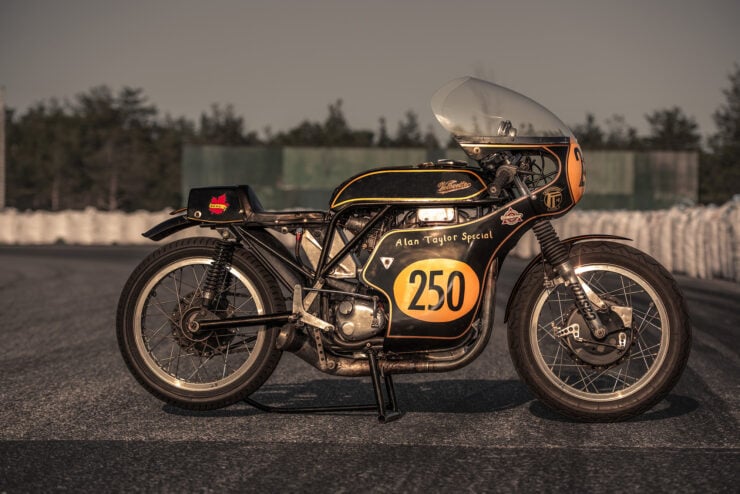 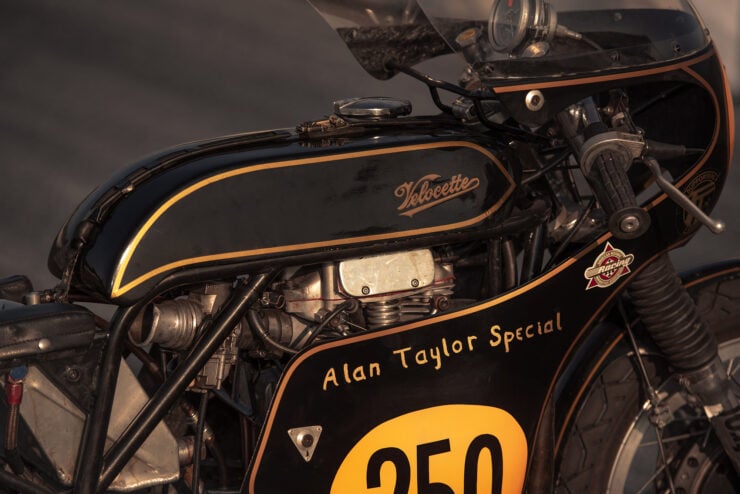 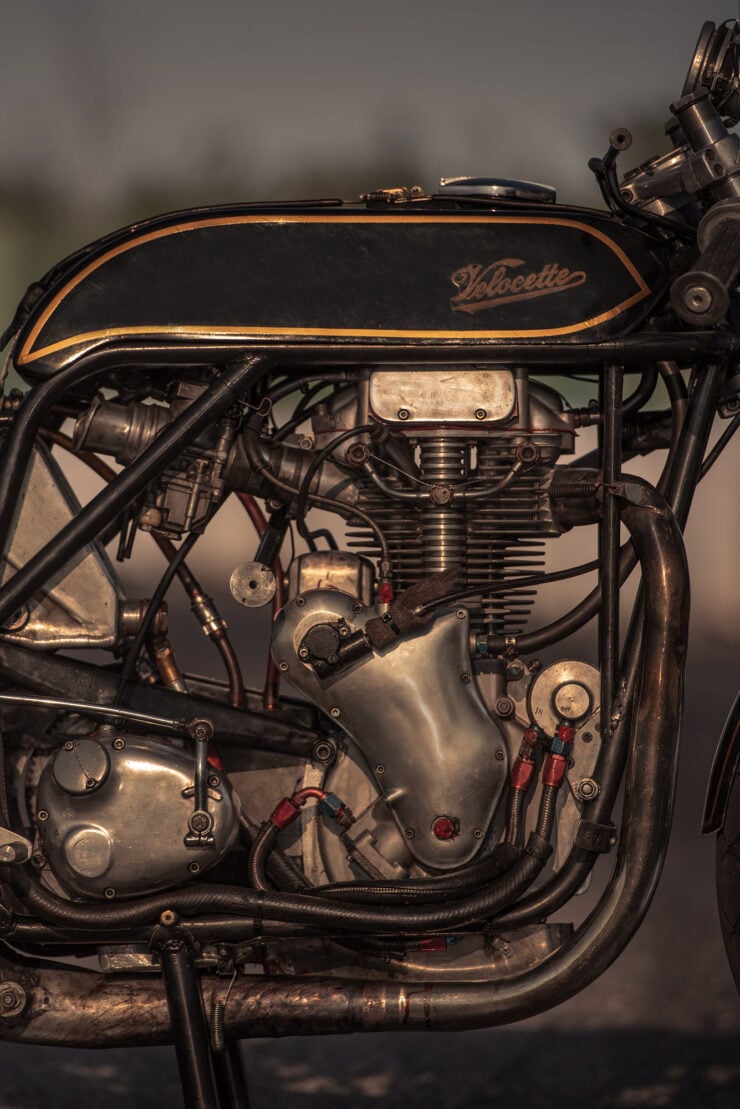 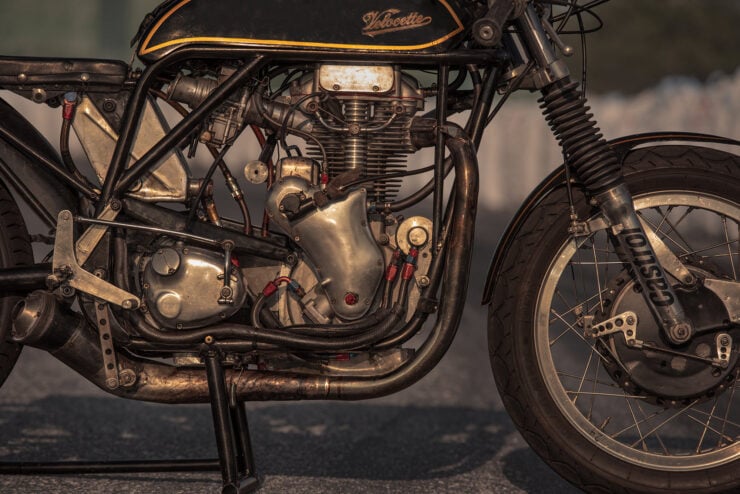 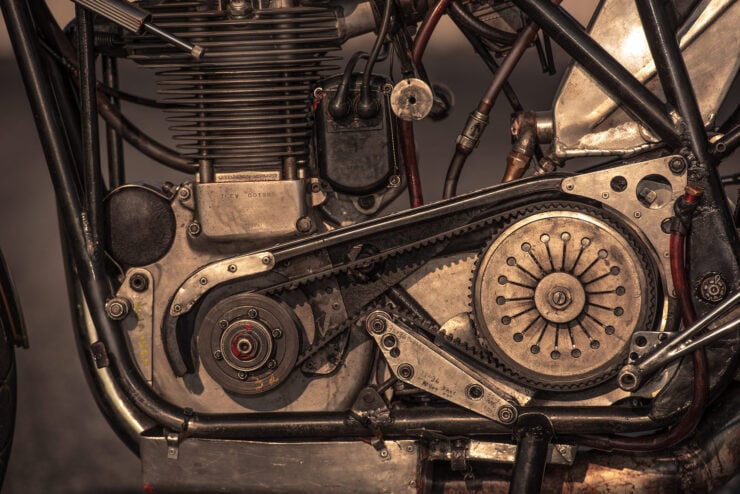 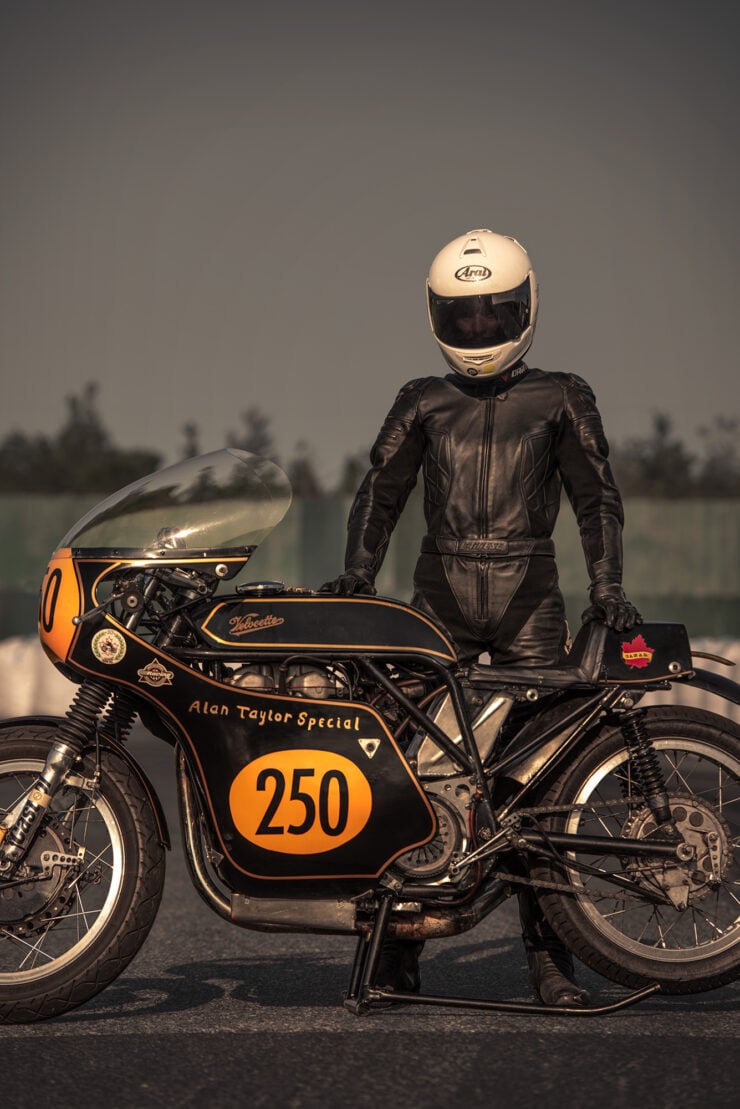