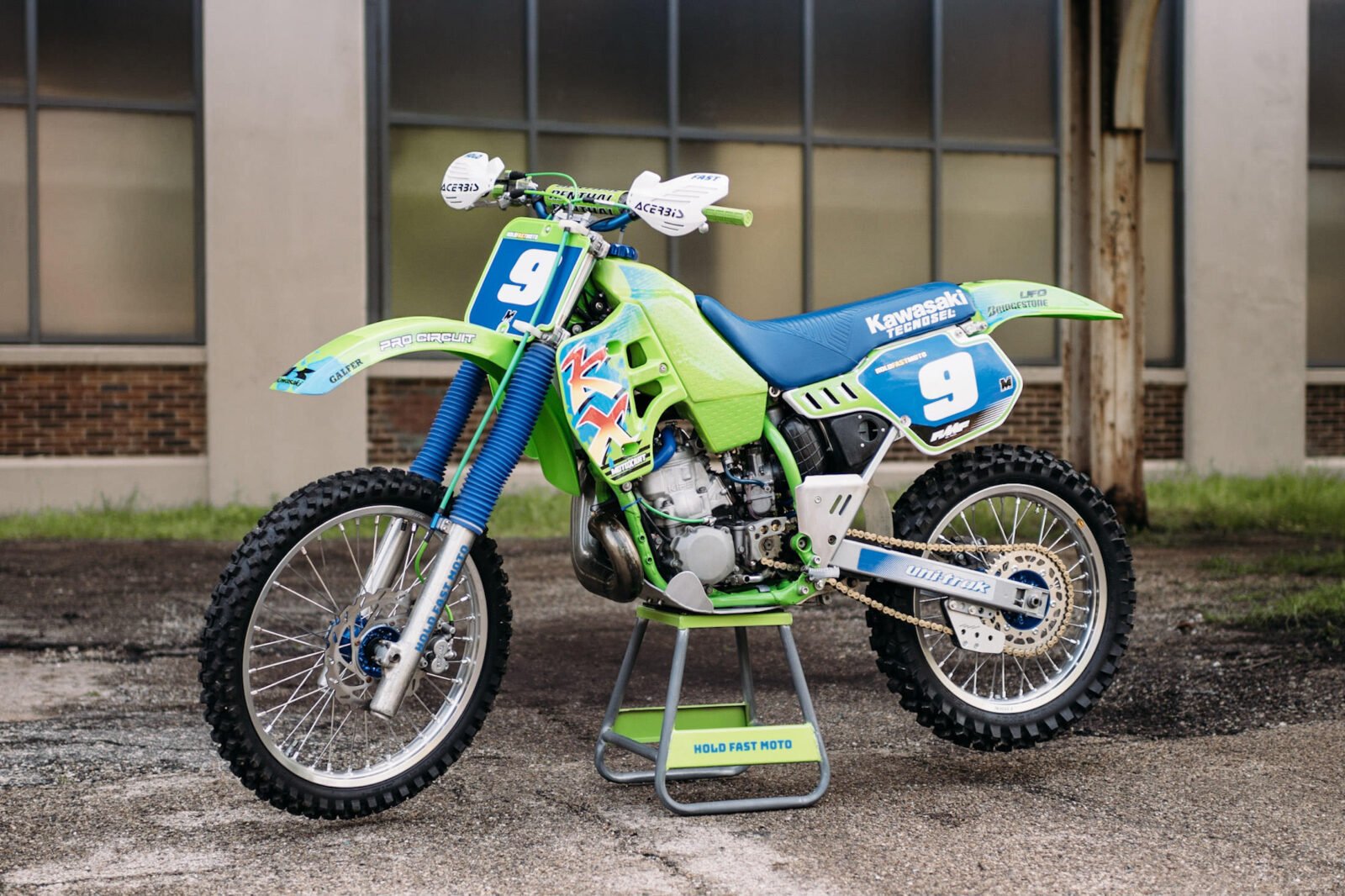 This article was written by Jeff Galia from the garage Hold Fast Chicago. When possible we like to bring you the story of a bike in the words of the people that built it to cut out the middle man and give unfettered insight into their methodology and thinking.

My name is Jeff Galia from Hold Fast Chicago. I have been working on custom bikes for a while now and enjoy anything on two wheels. I’m an engineer for the railroad in Chicago so when I’m not running these awesome turbocharged V16 diesel two strokes you can find me riding my bikes or in the garage working on something. I’ve been a fan of old school two strokes for a long time so when I found a 1989 KX250 for sale nearby for $500 I couldn’t resist.

The bike was in very rough shape so decided to do a full rebuild with the plan to keep it as close to stock as possible while putting my twist on it. This way it could still be raced in EVO or Next Gen classes at the track. The bike was missing the original tank from 1989 which is the Holy Grail of tanks in the motocross scene because it was only made that one year and it’s very sought after by KX250 and KX500 riders because of it’s more clean and racing appearance. 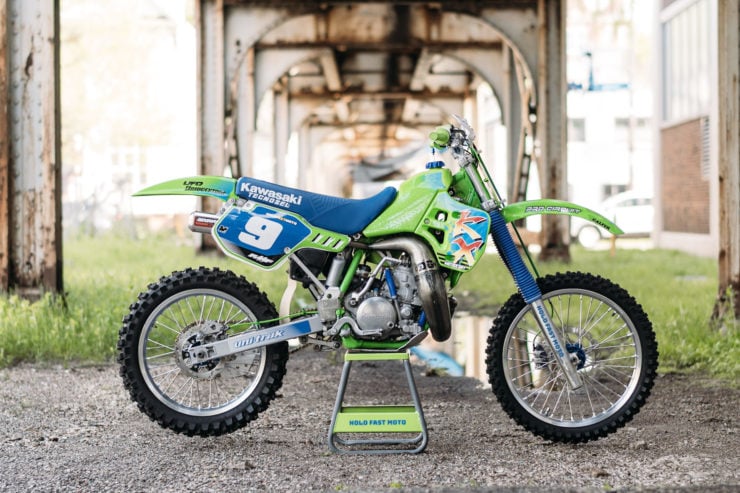 While tearing the bike down and searching for the tank for months I found another bike with the tank so I picked it up for parts which always helps when building older bikes.

After disassembling everything I started with the motor. The top end was rebuilt with a new piston and the bottom end received all new parts including clutch, gaskets etc. I powdercoated the frame Kawasaki green and the swingarm silver. The footpegs also got powdercoated textured silver since the old school pegs are small and any extra traction helps.

The subframe was in bad shape so I was able to purchase a custom aluminum subframe that was stronger and lighter than the original. The seat was reupholstered with new foam and an old school Tecnosel Gripper seat which turned out great.

I was lucky to find a lot of time period parts that would’ve been purchased by a rider back in 1989. The Answer silencer was rebuilt and polished up as well as the Answer Accu-Trax handlebar clamp. I was super stoked to find an NOS DG Pipe still in the box online that went on like a glove and not only looked rad but also improved performance. The bike also got all new hoses, cables, and custom green braided brake lines. 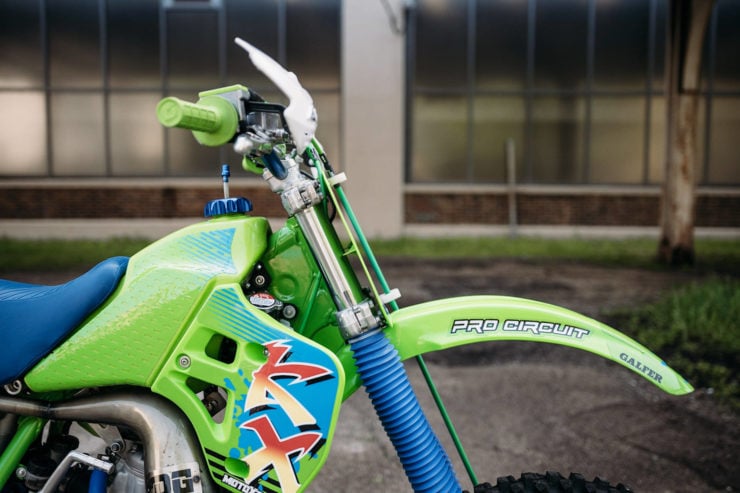 Not only do I like the track but I also love trail riding with my son so I decided to put a Ricochet skid plate and some Acerbis hand guards on the bike that turned out cool.

Next, I added some Works Connection rear brake and engine guards that needed to be slightly modified in order to fit. UFO hooked it up with all new plastics and I had to sand and polish the 1989 tank for many hours to match the shine of the new plastics.

It took forever but the hard work paid off and it looks awesome. Motoxart sent me some custom graphics and I put renthal handlebars on as well. I replaced the wheels with Tusk rims and stainless spokes. The stock hubs were powdercoated blue as well as the rear shock spring once it was rebuilt. The new tires are Shinko Holeshots that work well in all terrain. 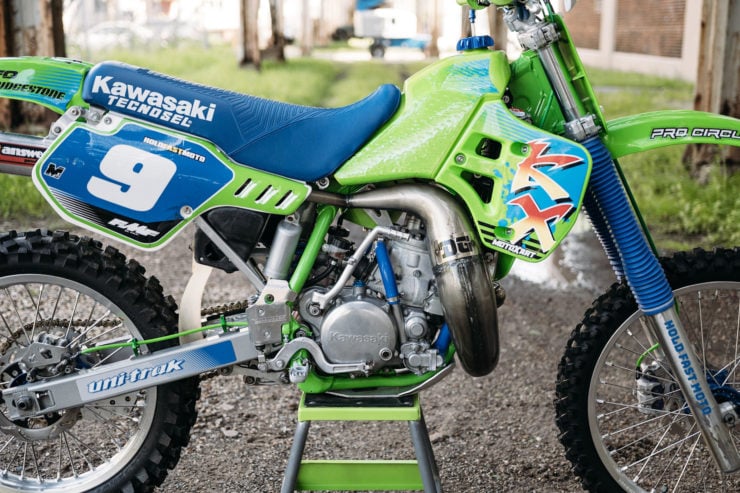 Once the bike was finished I called my buddy Grant Schwingle to take some photos and he hooked it up again with some awesome photos. We took the bike to Chicago during the lockdown and found a cool spot under the CTA L train tracks. I told him my main goal was for people to look at the bike and say “That’s RAD!” I think he killed it.

Although it isn’t the typical custom bike I see online, I think a lot of people will appreciate and enjoy this throwback. Shout out to John “Woody” Graves from Midwest Vintage MX for helping me with the motor and wheels.

The bike is meant to be ripping around and having fun. I built it to honor the heyday of two strokes, rad bikes, mullets, and awesome athletes like Jeff Ward and Ricky Johnson with his zebra print Fox Racing pants. In 1989 I was already into motocross from those guys and loved Excitebike on Nintendo, Hypercolor t-shirts, and The Dirtbike Kid movie. 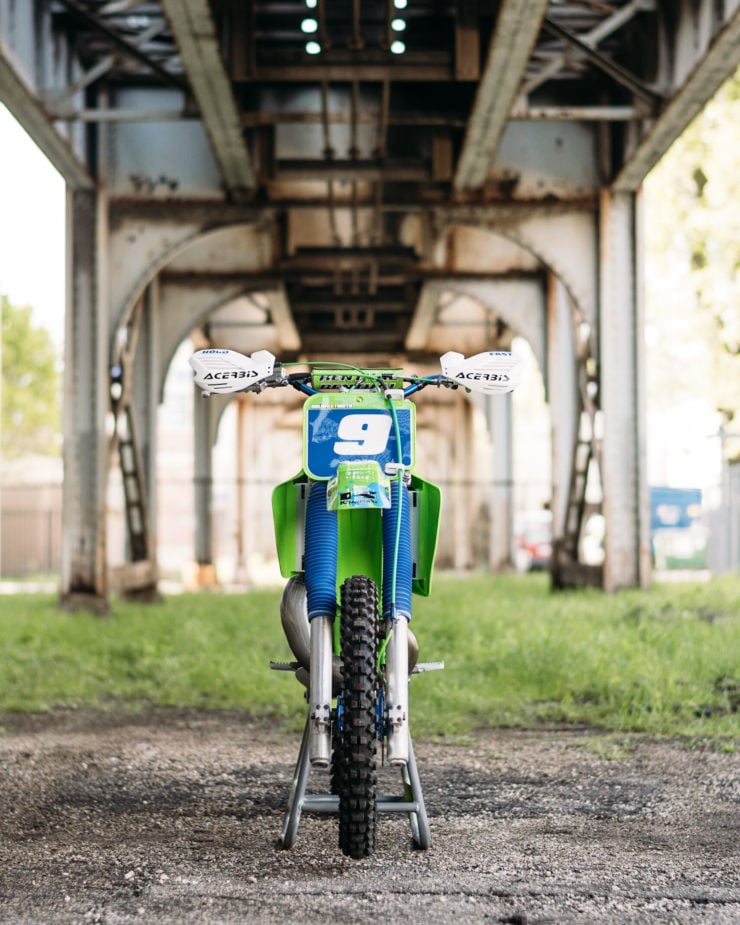 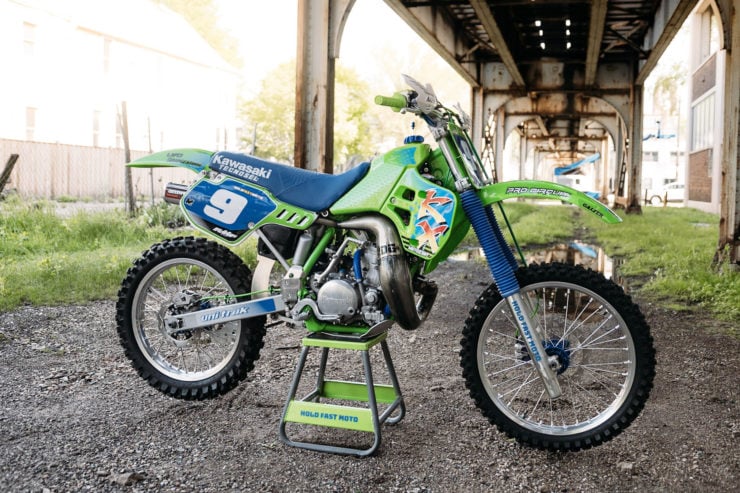 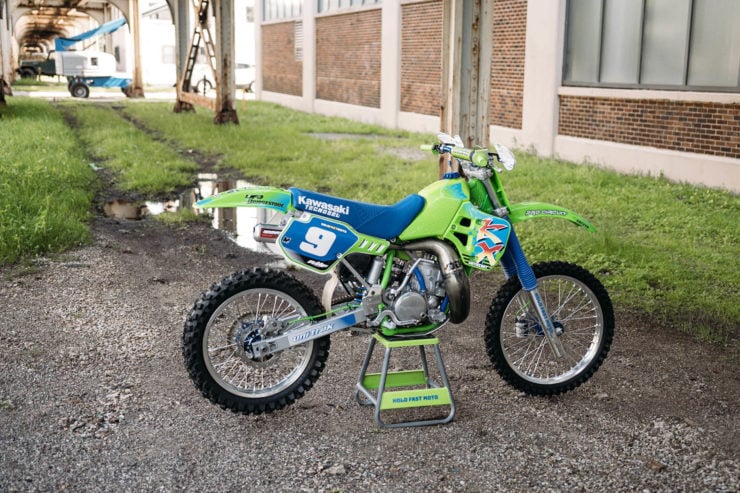 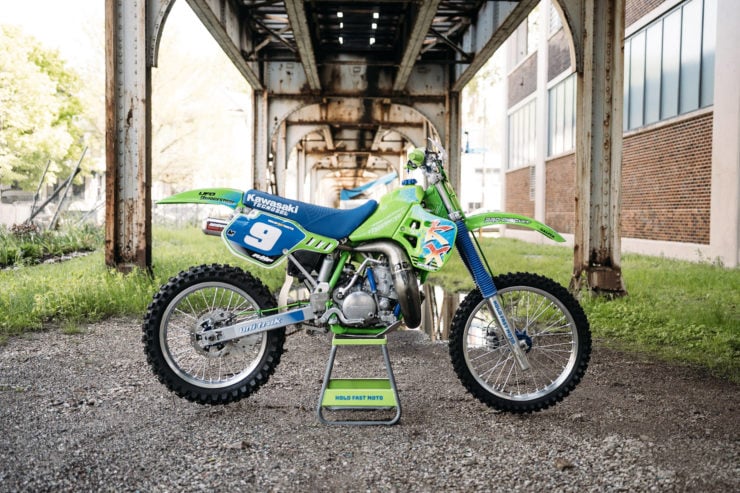 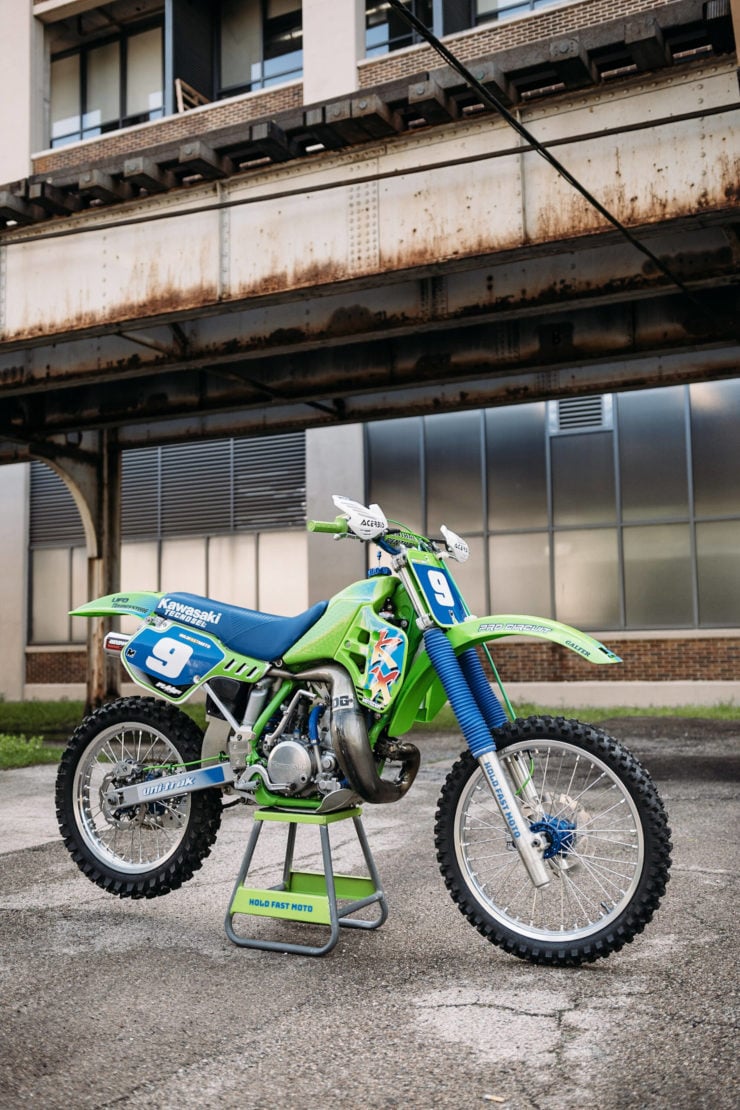 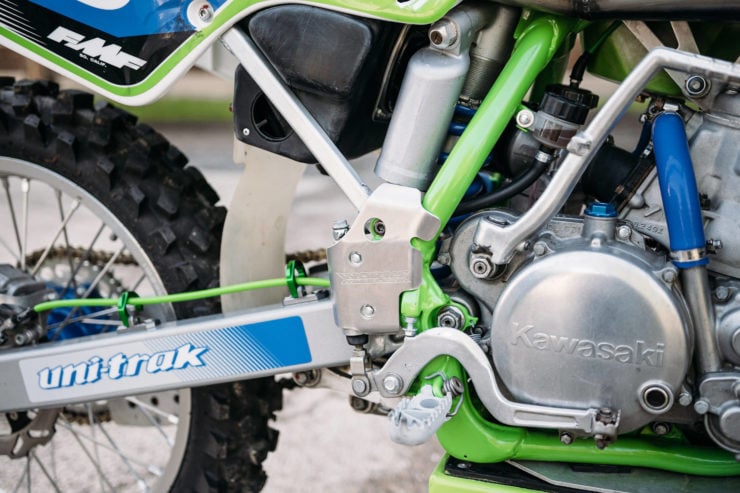 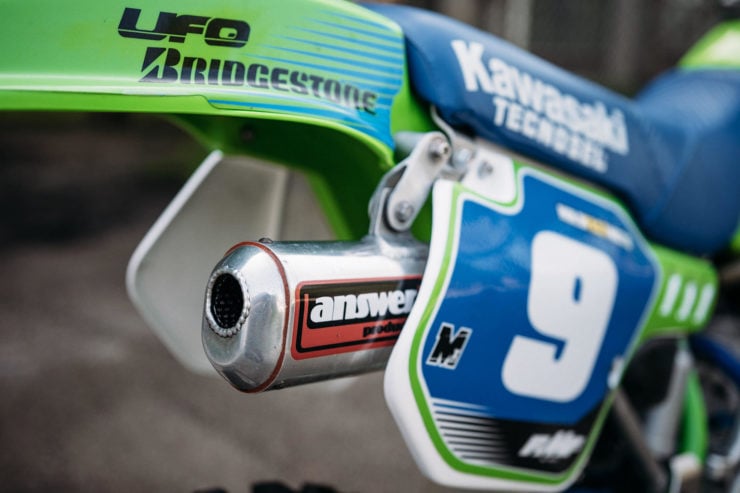 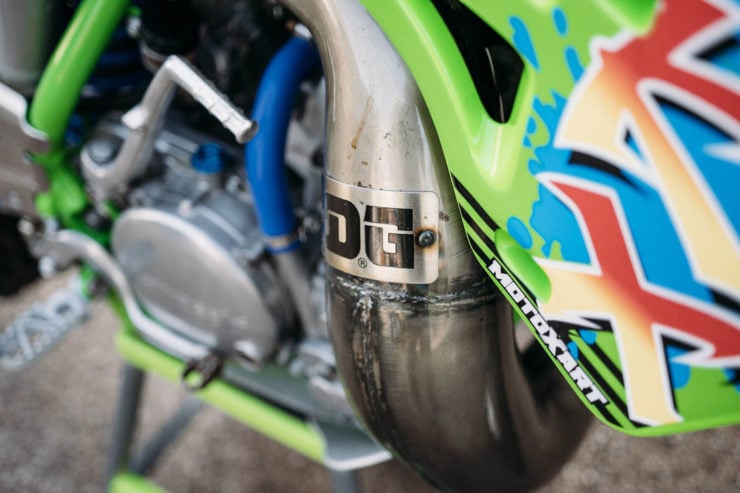 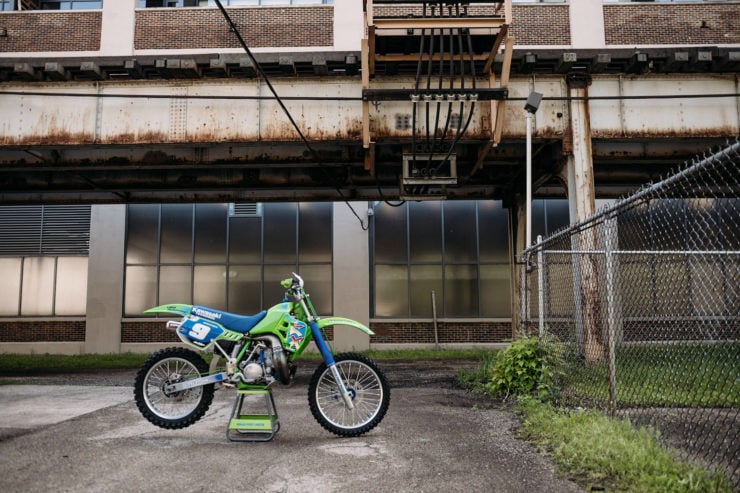 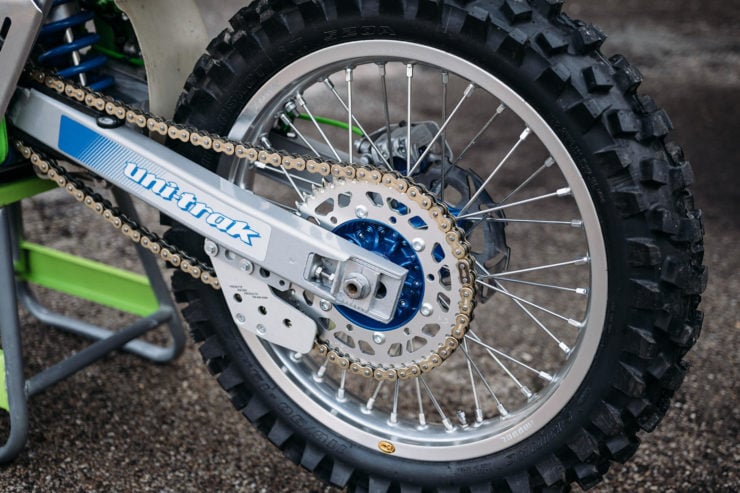 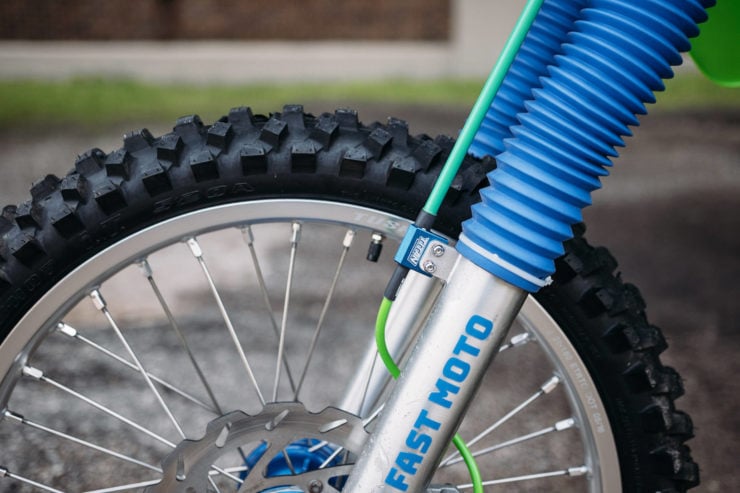 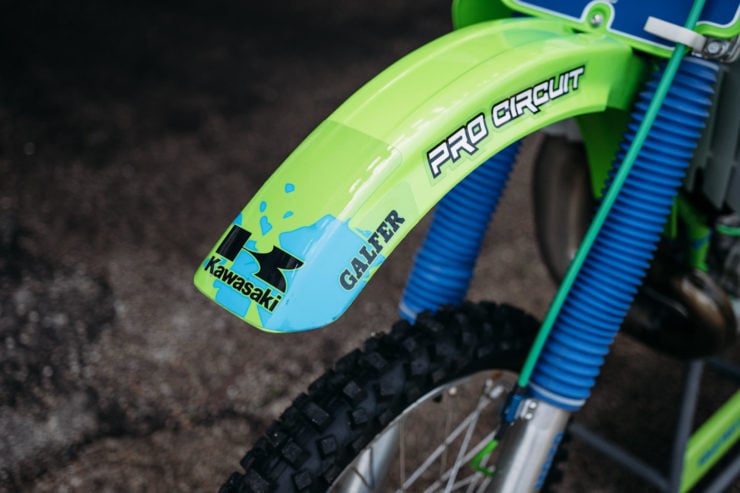 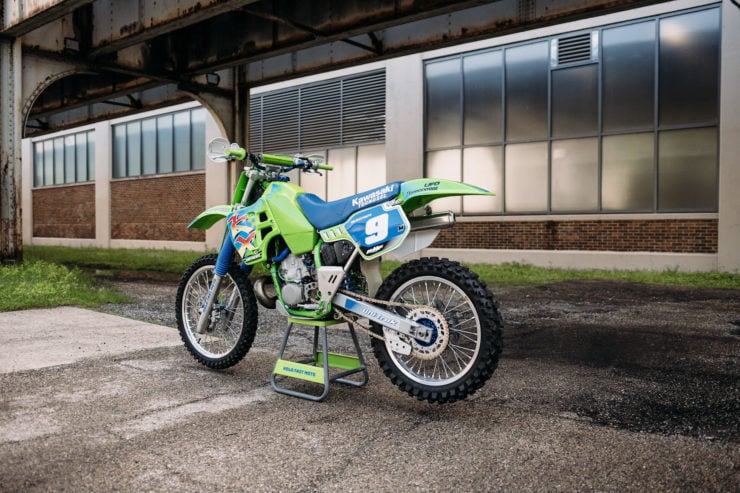 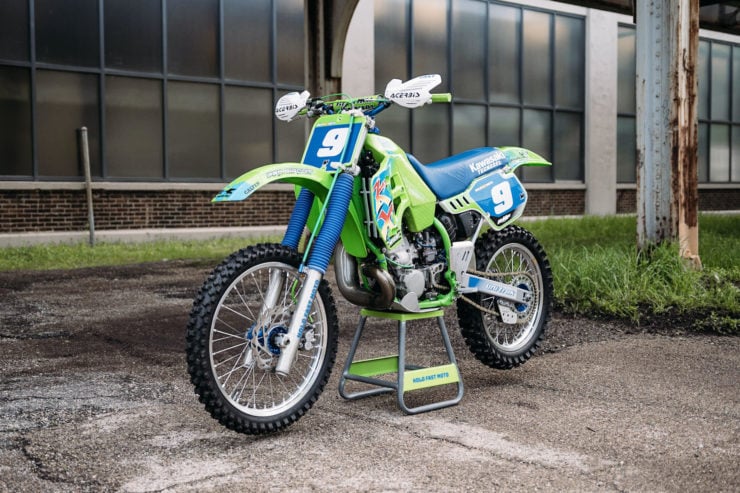 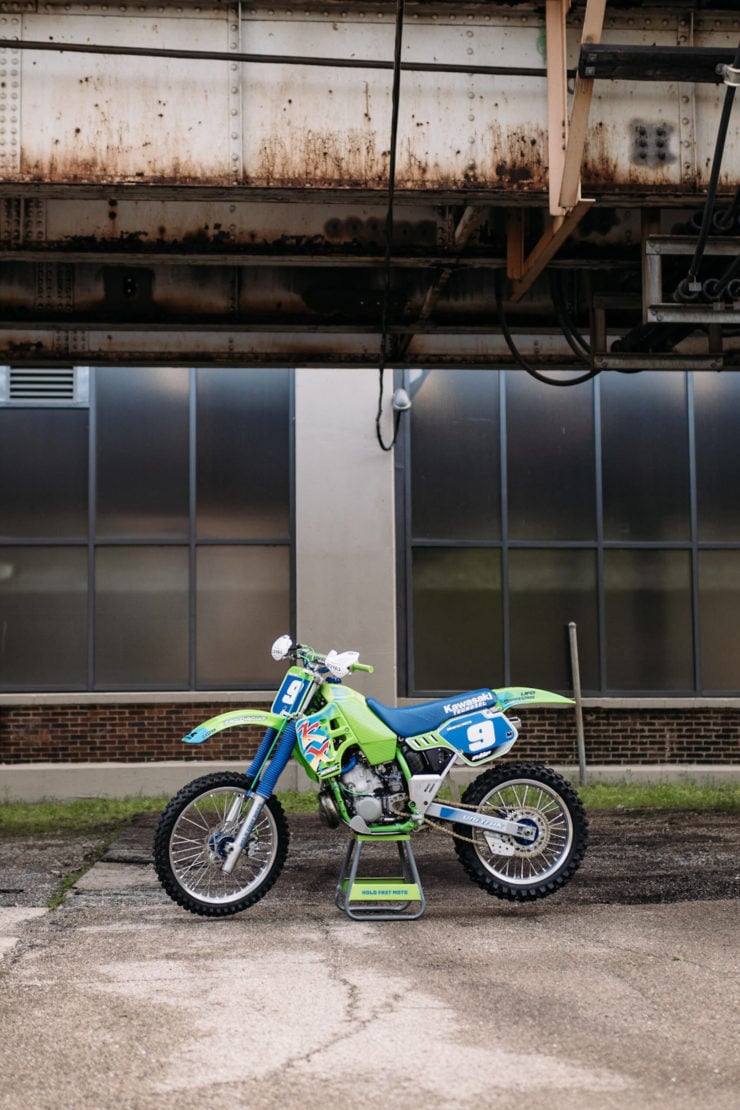 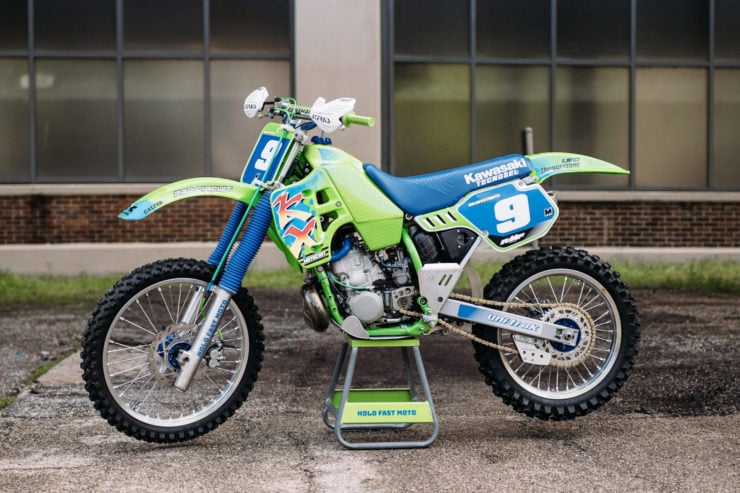 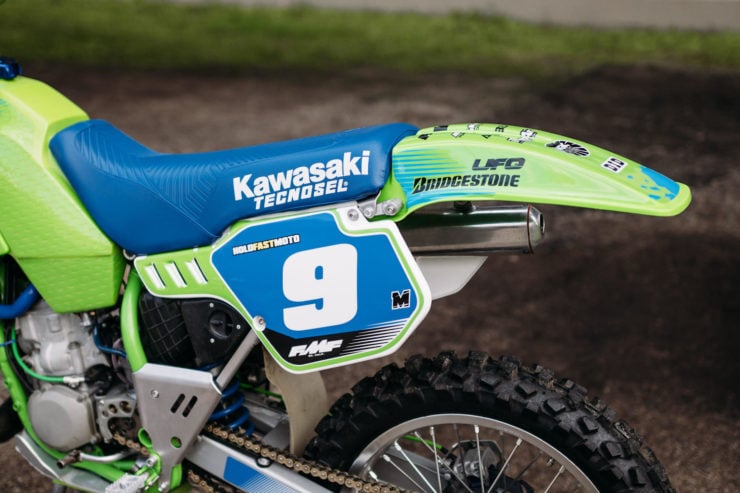 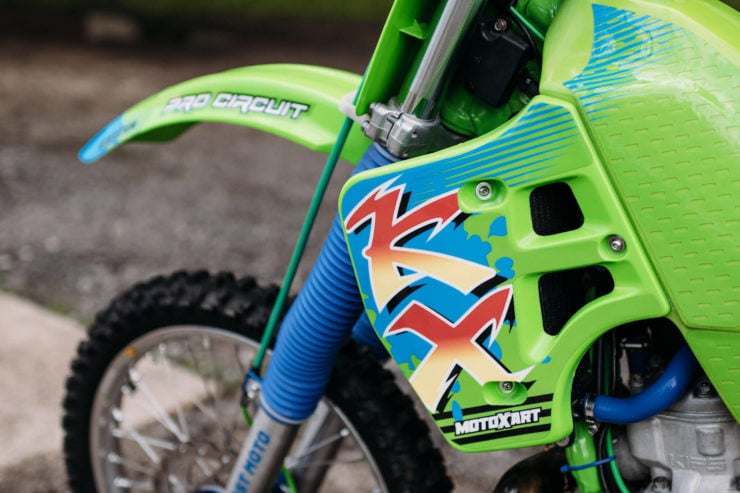