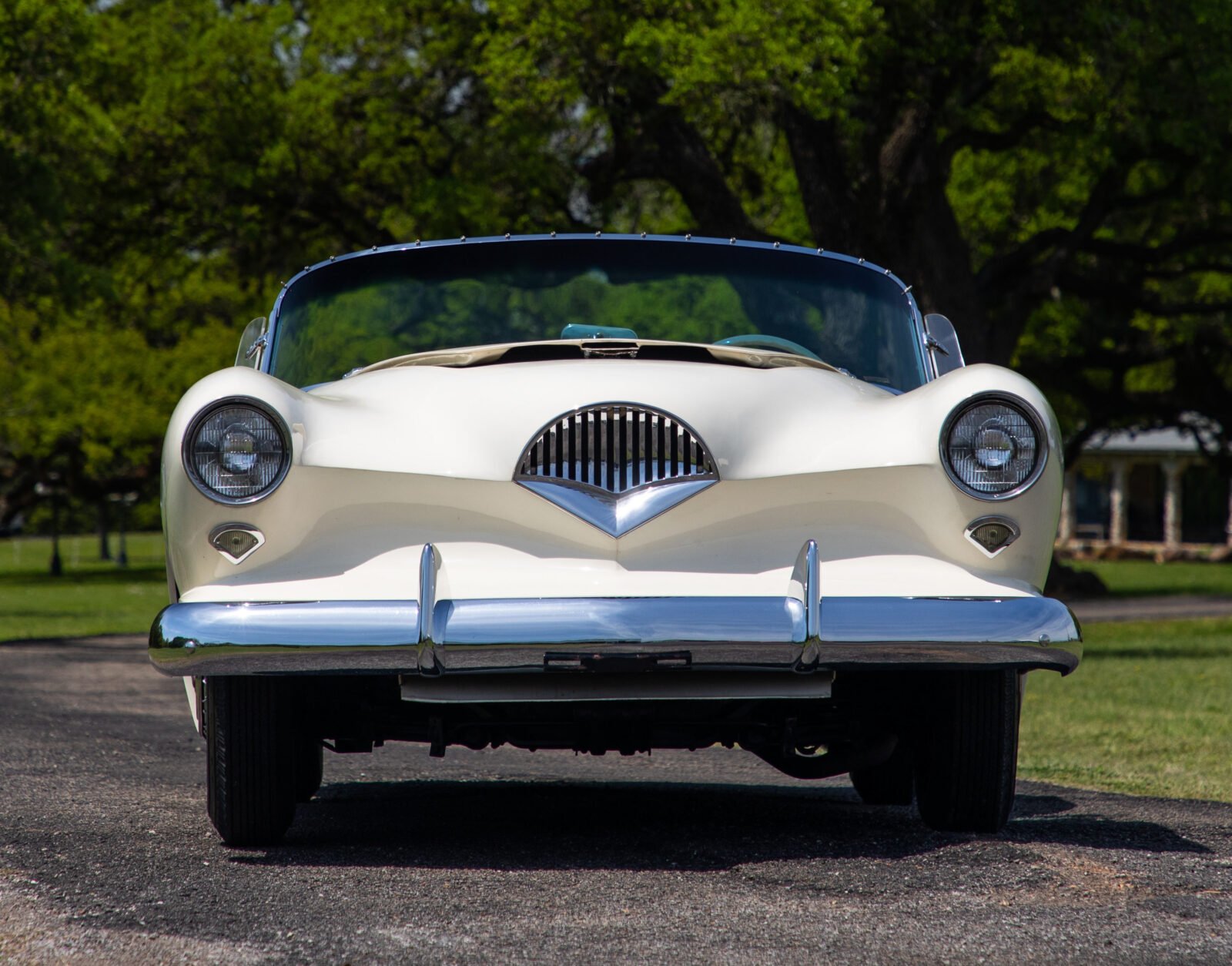 The Kaiser Darrin is an unusual American car that is considerably less famous than it deserves to be. The Darrin was the first mass-produced fiberglass-bodied sports car in the world, meaning of course that it was also the first composite-bodied production car.

Developing The Kaiser Darrin (In Secret)

Much like the Lamborghini Miura which would be developed decades later, the Kaiser Darrin was developed completely in secret, out of the sight of Kaiser company executives. This cloak and dagger approach was taken because it had been made clear that Kaiser wanted to focus on selling an affordable “every man” car in post-WWII America, the Henry J sedan.

American automotive designer Howard “Dutch” Darrin realised he could turn the chassis and powertrain of the Henry J into a sports car if he simply removed the steel body from the chassis, and replaced it with a lightweight, sleek sports car body, and then made some modifications to the suspension.

Using steel for the new body would be out of the question as it would require expensive stamping equipment, aluminium alloy would prove similarly expensive due to the intensive craftsmanship each panel would need – so Darrin pursued fiberglass.

Fibreglass was a new, advanced material at the time that promised to revolutionize the automobile industry. Once a mould was created the fiberglass cloth was laid down and coated with resin, then left to dry. This was a simple process, so simple that workers could typically be trained in a single day. 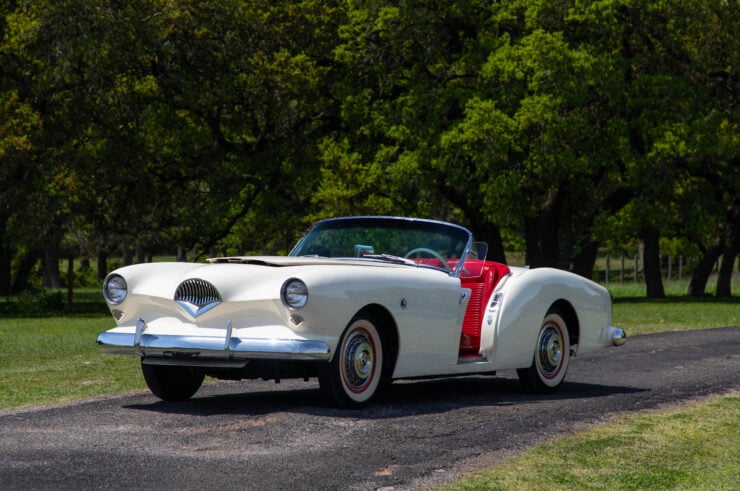 Above Image: Here you can see the Darrin’s unusual doors that slide forward into the front fender rather than swinging out as with regular cars.

What Darrin did was design a body to fit the wheelbase of the Henry J, he then had it made from fiberglass by Bill Tritt, a man who had pioneered the use of fibreglass in sports car bodies. This body was then fitted to the chassis in secret, the car was finished off and Darrin unveiled it to company boss Henry J. Kaiser.

Kaiser’s reaction was ferocious, Darrin quickly explained that the car hadn’t been developed on company time or with company funds, which helped calm the boss down a little, but he was still adamant that it would never be put into production.

That is until his wife took him aside and said “This is the most beautiful thing I have ever seen. I don’t see why you aren’t in the business of building sports cars. I don’t think there will be many automobile companies that won’t go into the sports car business after seeing this car.”

This completely changed Kaiser’s mind, he cautiously agreed to the project, much to Darrin’s relief.

Prior to this there had been a few small-scale companies in the United States offering both turnkey fiberglass cars and fiberglass bodies that could be fitted onto pre-existing chassis. The Darrin was the first release from a “big” company, being unveiled at the 1952 Los Angeles Motorama, two months before the first Corvette was released with its fiberglass body.

Delays meant that although people could order their car, none were delivered until 1954. These delays coupled with the somewhat disappointing performance capabilities of the car led to it not being particularly popular – the top speed was just 95 mph and it took 15 seconds to go from 0 to 60 mph. 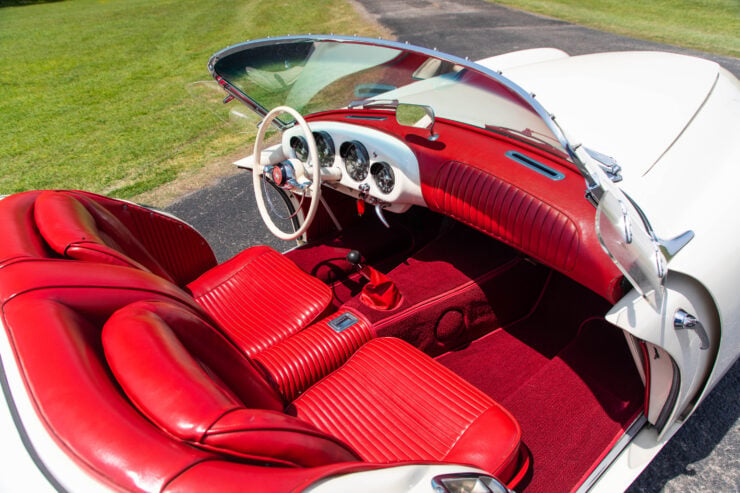 Above Image: The interior of the Darrin is beautifully appointed and not dissimilar to the early Corvettes of the same era.

Due to the fact the car hadn’t originally been designed as a sports car the handling also suffered compared to its British rivals. As a result of these issues and some bad luck with a freak snowstorm, the Kaiser Darrin would be produced for one year only, 1954, and just 435 would be made.

Today the surviving examples of the unusual car are a highlight at any auto show they attend, people love to comment on the unusual “fan shell” front grille and the doors that disappear into the front fenders are a major highlight. The historic importance of the car seems to be increasingly recognized – particularly as lightweight composites become more and more common in automobile construction.

Over the years owners have learned to tweak their cars to notably improve handling, some even added superchargers to boost output from the 161 cu. in. (2.6 litre) F-head 6-cylinder engine.

The car you see here is the 67th of the 435 that were built, it received a body-off restoration in the 1990s and it’s now presented in period-correct condition with its 161 cu. in. 91 hp F-head Willys 6-cylinder engine, 3-speed manual transmission with overdrive, and correct interior.

The most common color for the Darrin was white and the red interior certainly suits it well, this car is one of the nicest examples of the rare model we’ve seen in recent years so it’ll be interesting to see what it sells for.

If you’d like to read more about this car or register to bid you can click here to visit the listing on Mecum, it’s being offered with no reserve at the Indy Auction in mid-May. 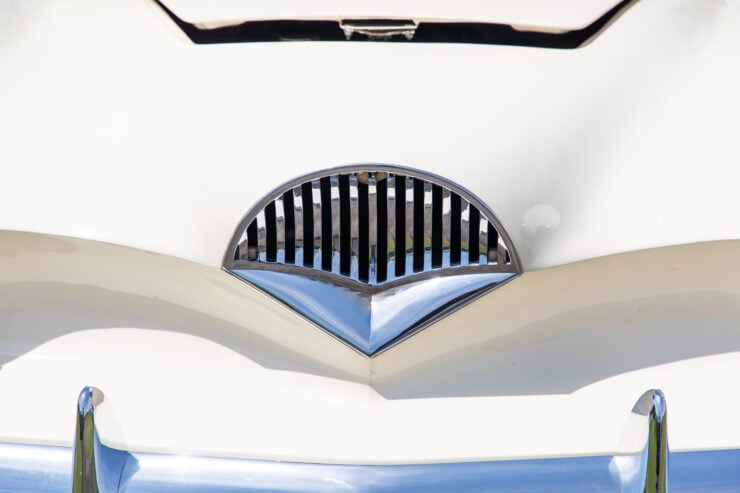 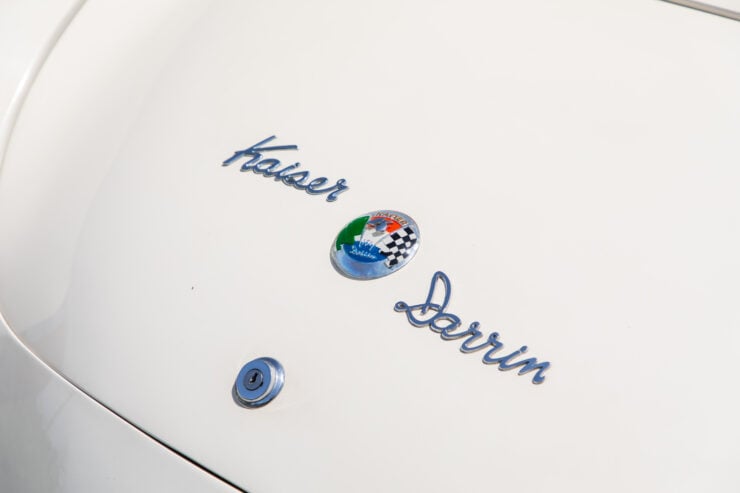 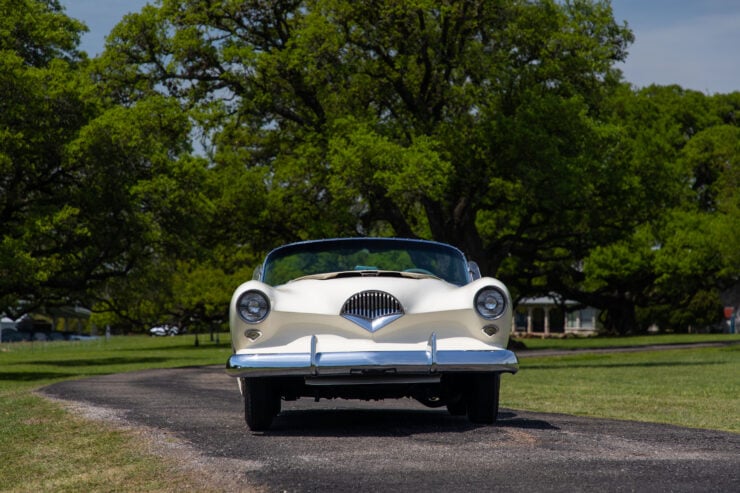 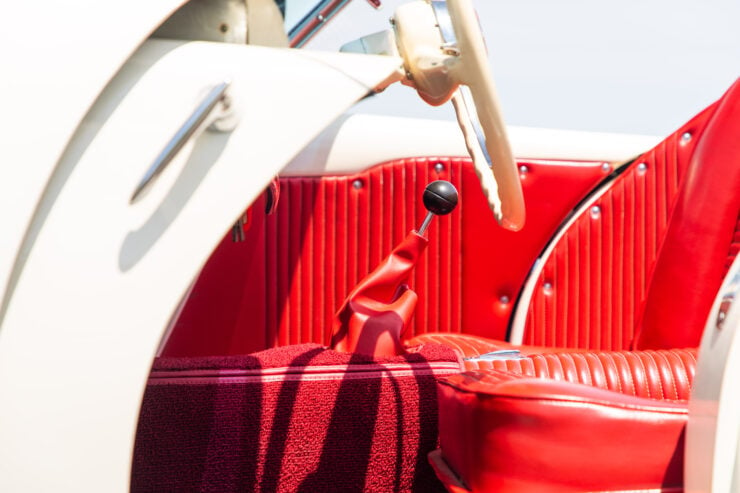 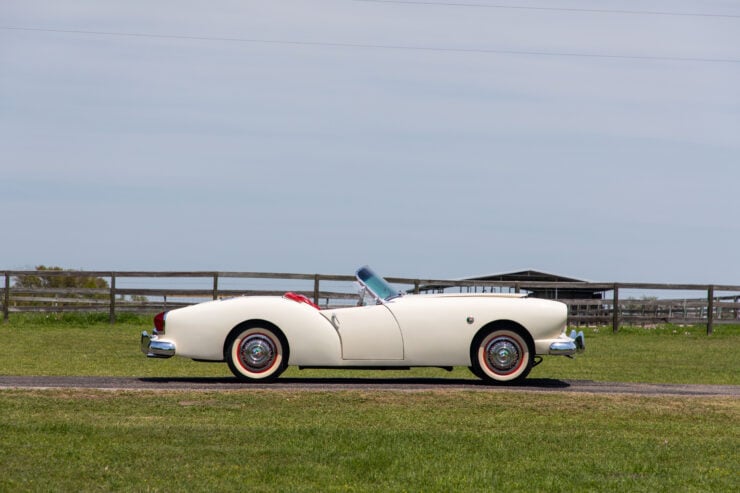 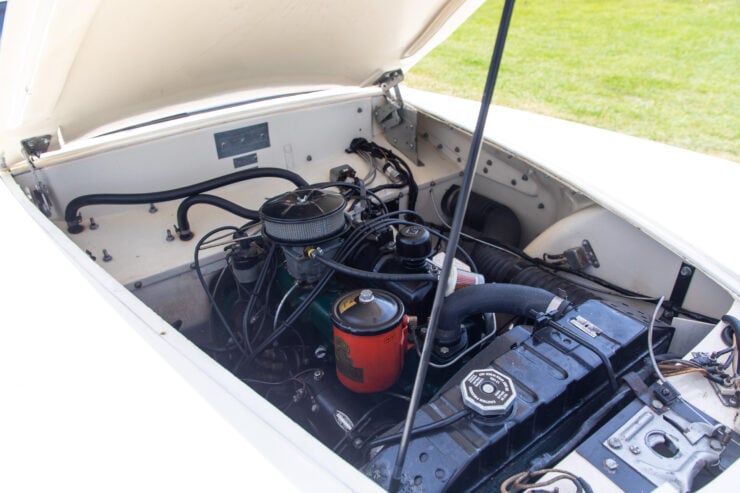 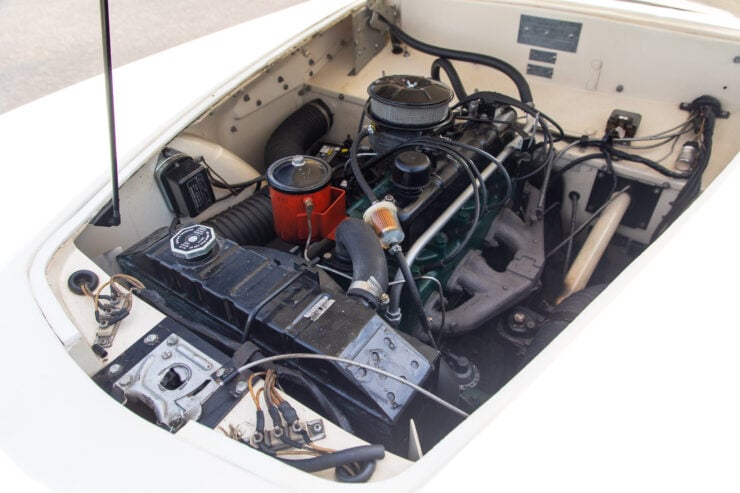 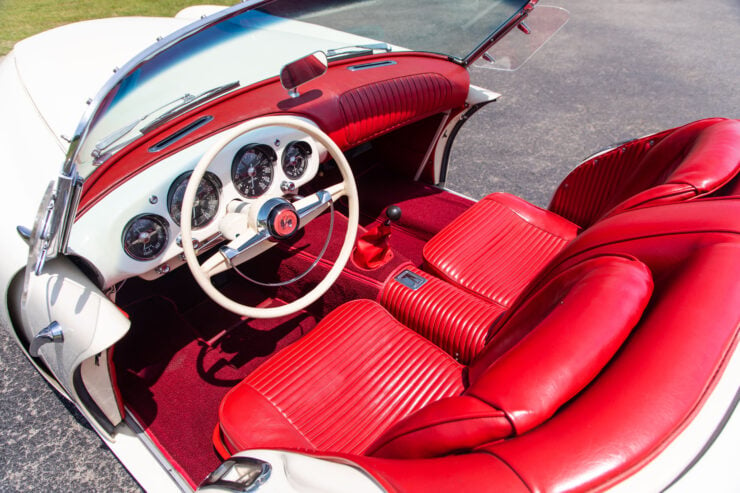 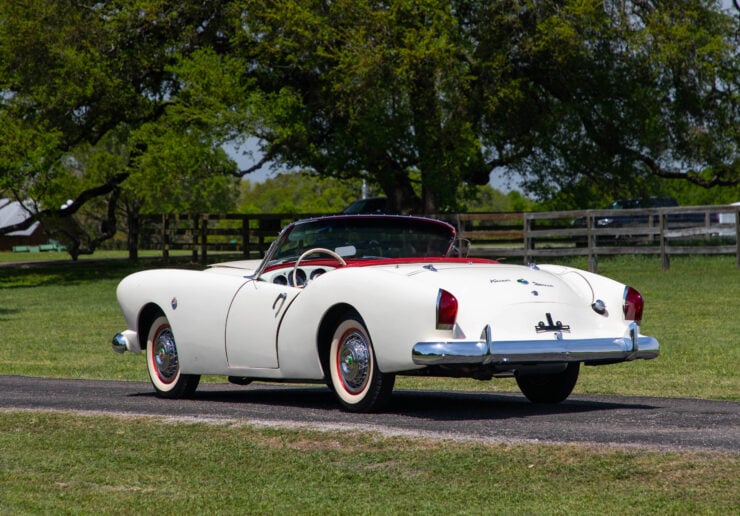 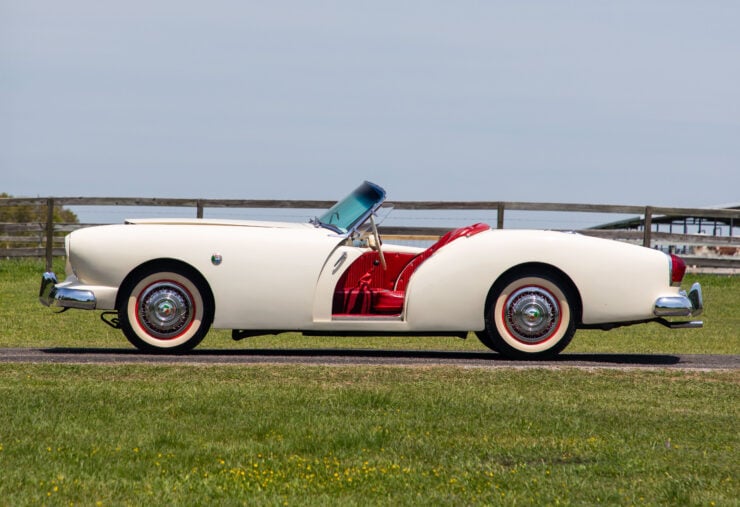