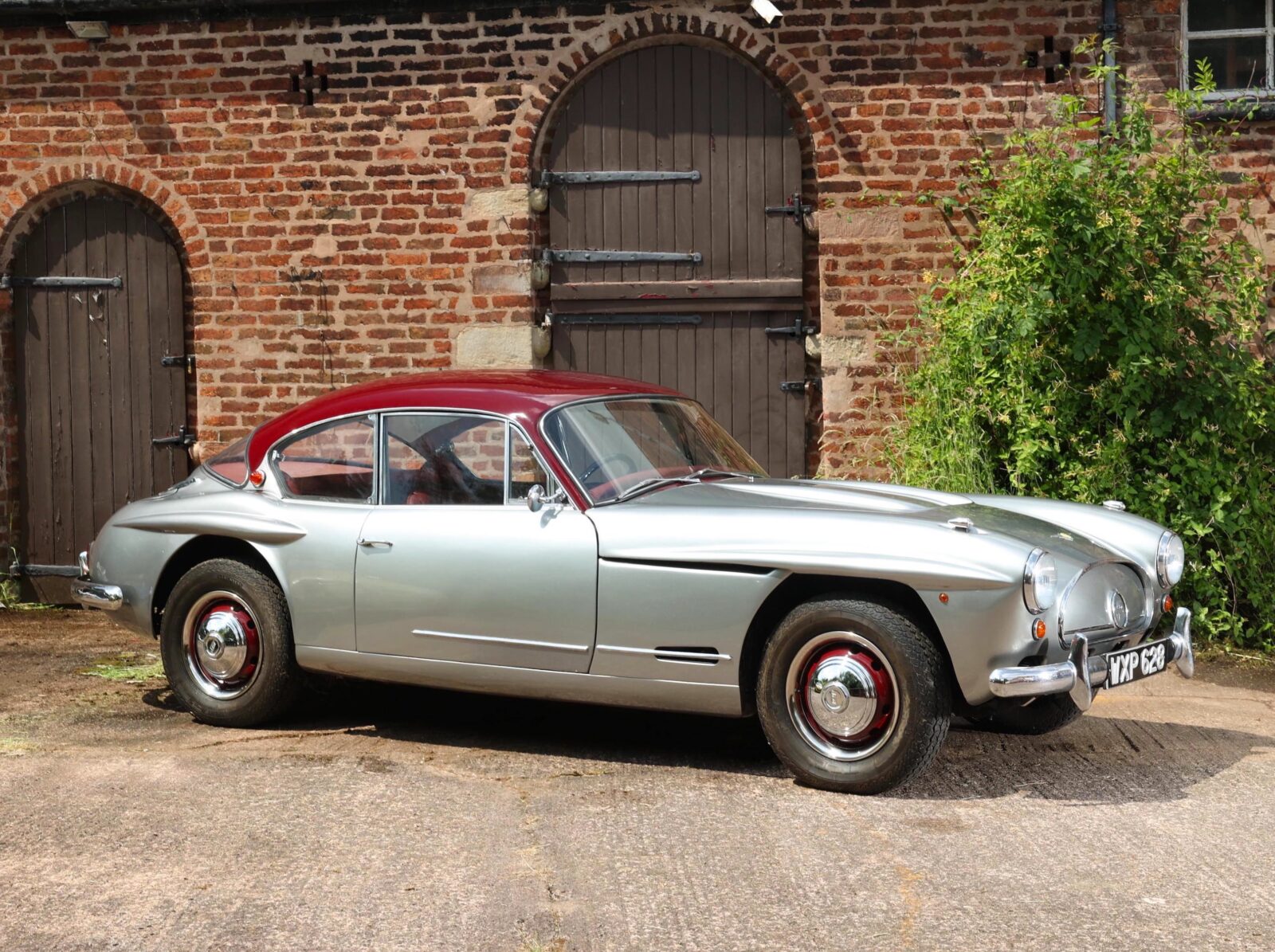 This is the Jensen 541R and if you’ve never seen one before that’s probably because just 193 of them were made between 1957 and 1960, and very few were exported out of Britain.

The elegant design of the 541 series of Jensens has been winning them fans for over half a century now, the most popular feature is the front grill covering which can be raised or lowered by the driver from inside the car.

Over the course of the company’s history, Jensen built everything from trucks to advanced all-wheel drive sports cars. The 541R was built during Jensen’s booming post-WWII period, and it was one of the first British cars with a composite body (fiberglass).

✱ The Jensen 541 was one of the fastest four seat cars in the world when it was introduced, with a top speed of over 115 mph.

✱ In 1956 the 541 Deluxe was fitted with Dunlop disc brakes front and rear as standard, the first British four seat automobile to offer them.

The Jensen 541R was the new and upgraded version of the Jensen 541 introduced in 1957. Like its forebear the 541R had a steel chassis, a lightweight fiberglass body, independent front suspension, a live axle rear, and it was powered by the 4.0 liter straight-six engine from the Austin Sheerline. 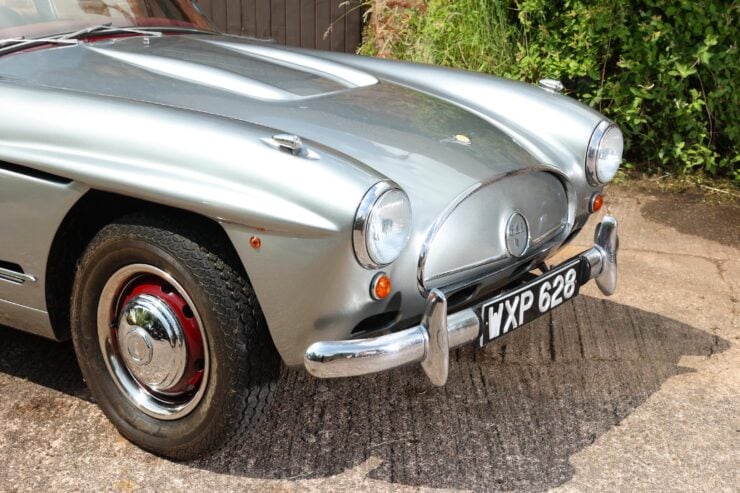 Above Image: The grill can be opened and closed by the driver from his seat inside the car, this unusual feature wouldn’t make it to the next car in the 541 model line.

The 541 was designed by Eric Neale using contemporary design cues with perhaps a little inspiration from the Mercedes-Benz 300 SL. Period magazine reviews of the 541R and its siblings were typically glowing, the cars were fast, they handled well, and the interiors were luxurious with leather upholstery, front bucket seats, and plenty of trunk space.

Jensen Motors wasn’t a big automobile marque and as a result it turned out far fewer cars than many of its fellow manufacturers. The company had originally started out when brothers Alan and Richard Jensen began designing and building car bodies for chassis made by other companies, like Austin and Wolseley.

By the mid-1930s they had made quite a name for themselves, in 1934 they were commissioned by American A-list movie star Clark Gable to design and build a car for him based on a Ford V8 chassis. This design won them accolades on both sides of the Atlantic and resulted in a deal with Ford to produce a run of Jensen-Fords with Jensen bodywork on a Ford chassis.

In 1939 all of this was interrupted by the outbreak of the Second World War, the Jensen factory turned to making equipment for the war effort, including tank turrets as well as specialised ambulances and fire engines.

After the war they returned to their true passion, automobile manufacturing. The first post-WWII car from Jensen was the Jensen PW, followed by the first Jensen Interceptor – not related to the later Jensen Interceptors introduced in the 1960s.

This is the point at which the first Jensen 541 first appeared, it shocked much of the British motoring establishment with its use of a new state-of-the-art material called “fiberglass” which allowed for the quick created of complex car bodies using just a mould. 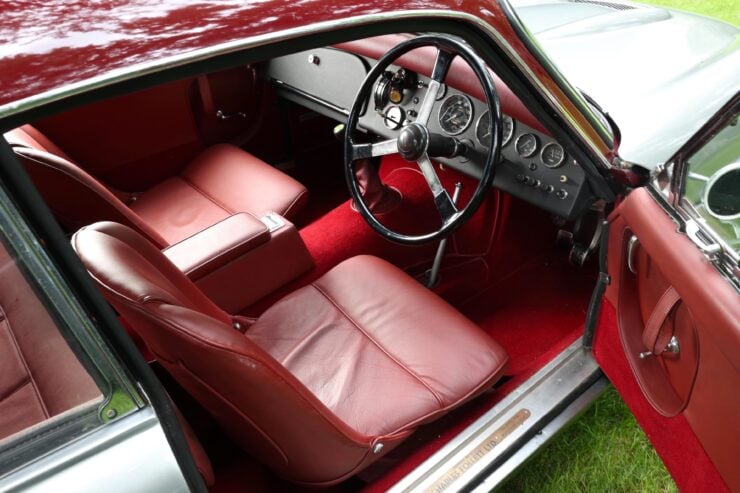 Above Image: The interior was very well appointed by the standards of the era, with leather upholstery, plush carpeting, and a well appointed dashboard.

It’s not known exactly how many examples of the Jensen 541 remain, there are owners clubs that do a great job of cataloguing the surviving cars and helping owners to network and source parts.

The 541R you see here is from the penultimate year of production for the model, 1959, and it was given a full restoration in 2010. It’s presenting today in good shape throughout however it hasn’t been driven since 2017 and so recommissioning is recommended prior to returning the car to active use.

This car was originally supplied new by Charles Follet Ltd finished in silver with a burgundy roof and a burgundy leather interior, with burgundy steel wheels to match. 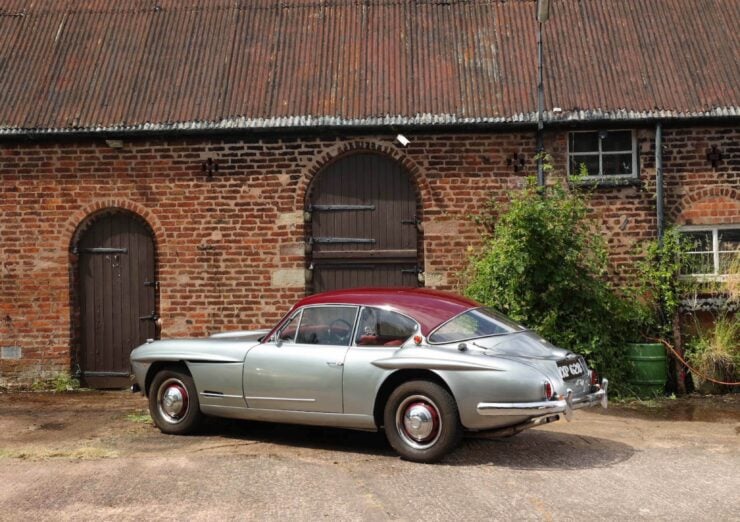 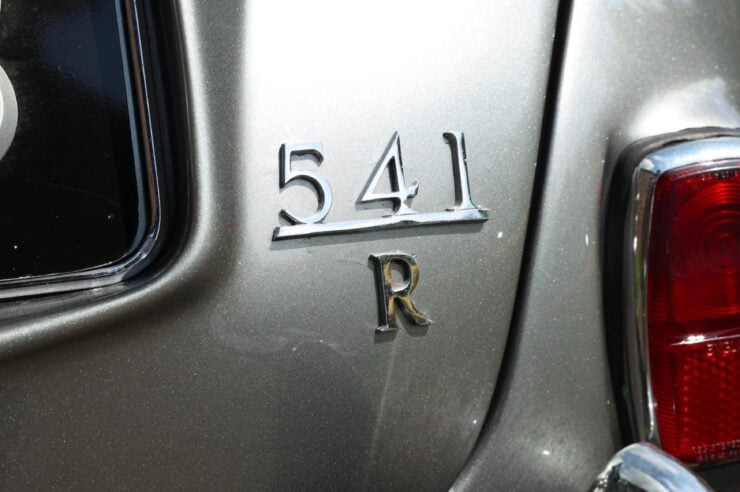 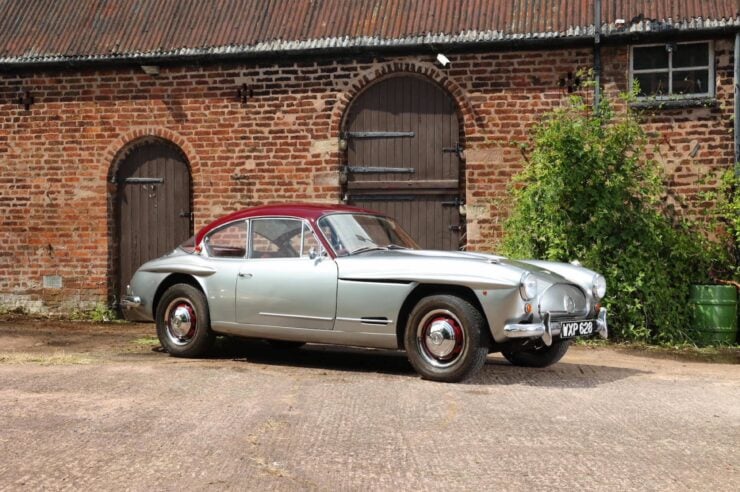 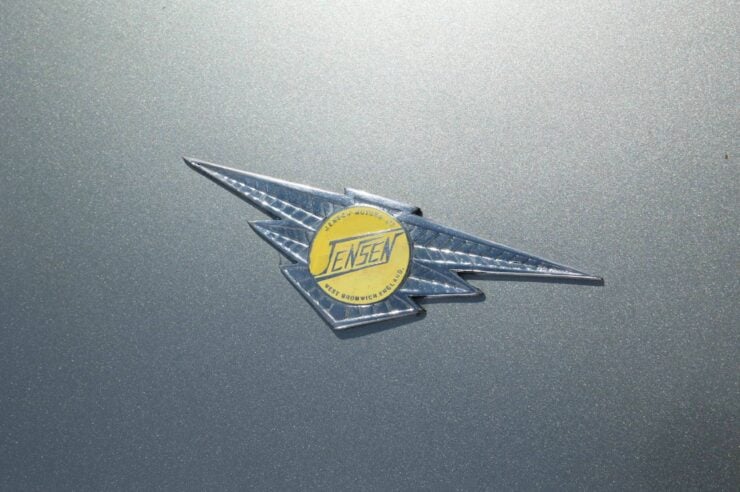 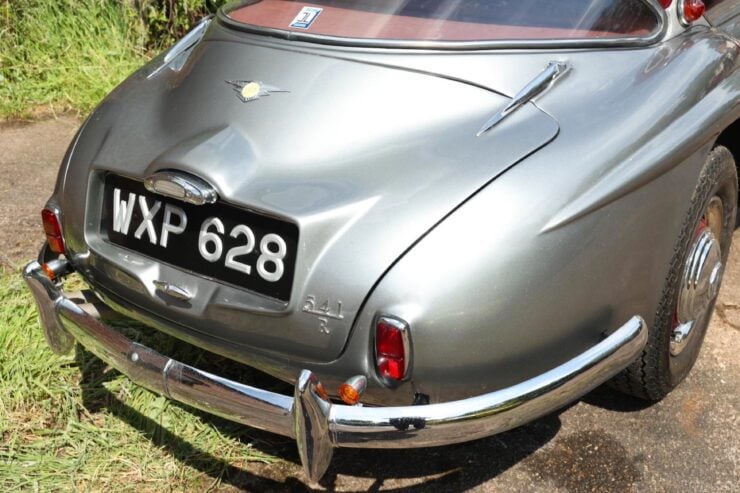 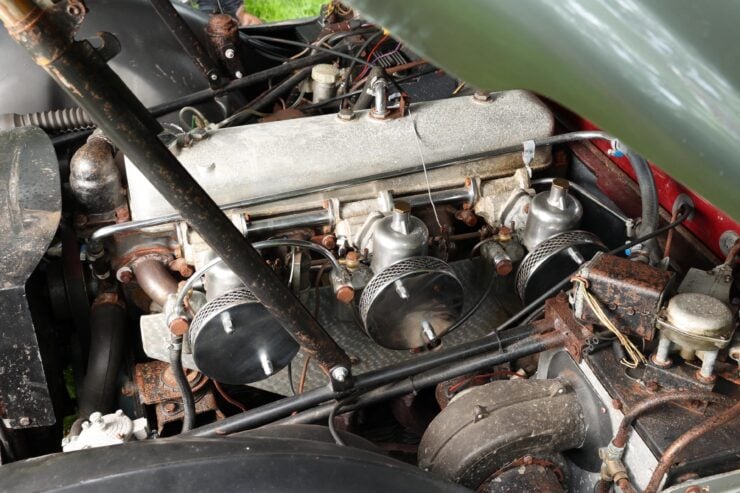 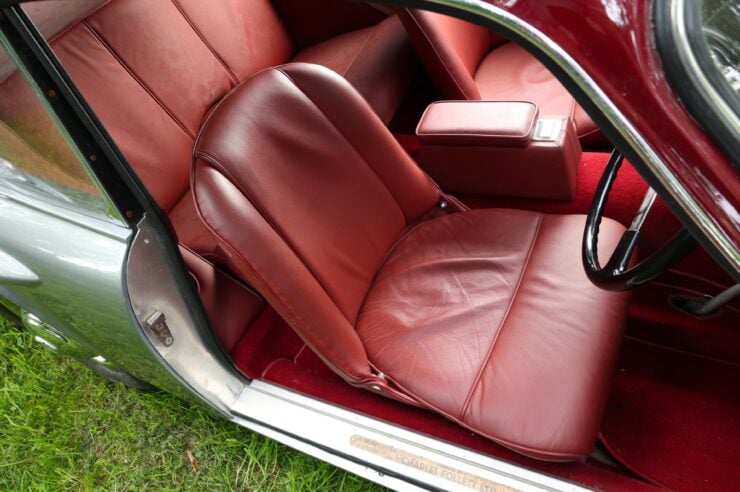 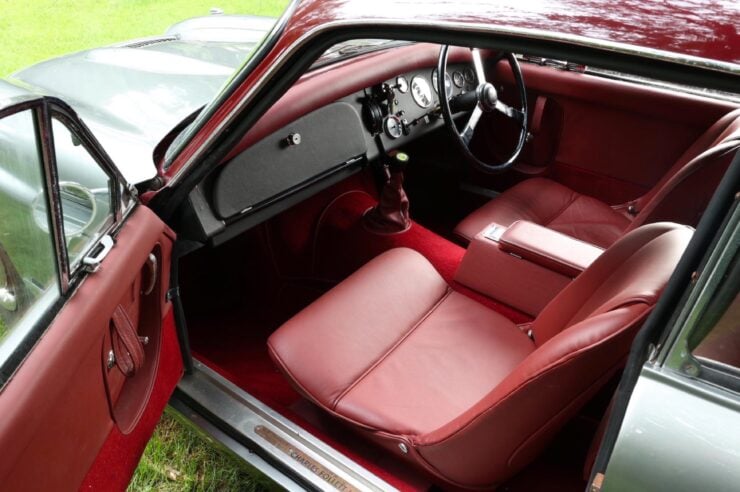 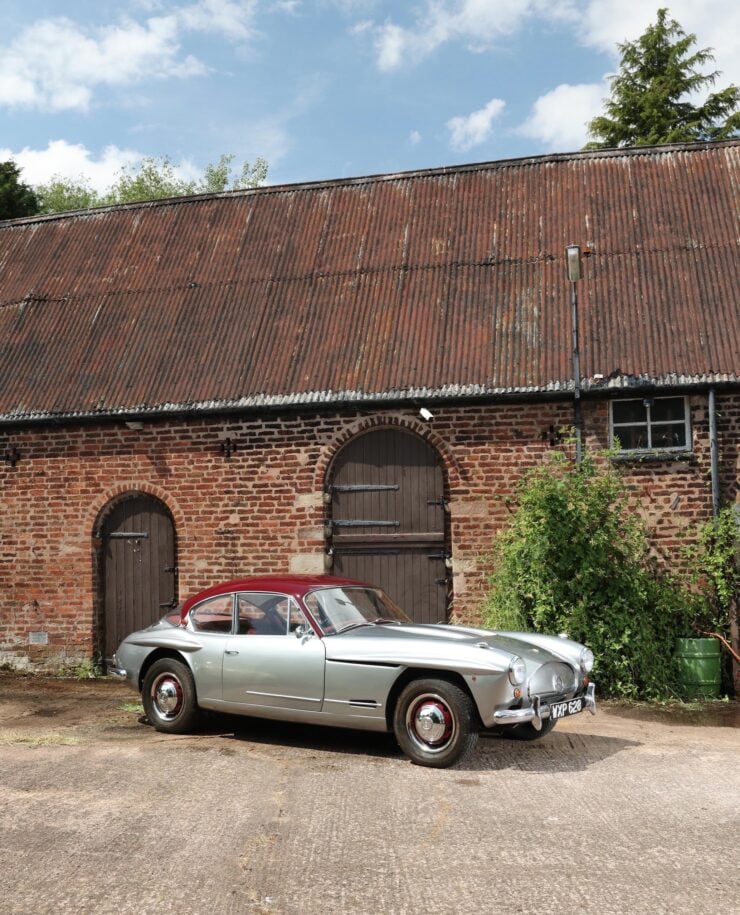