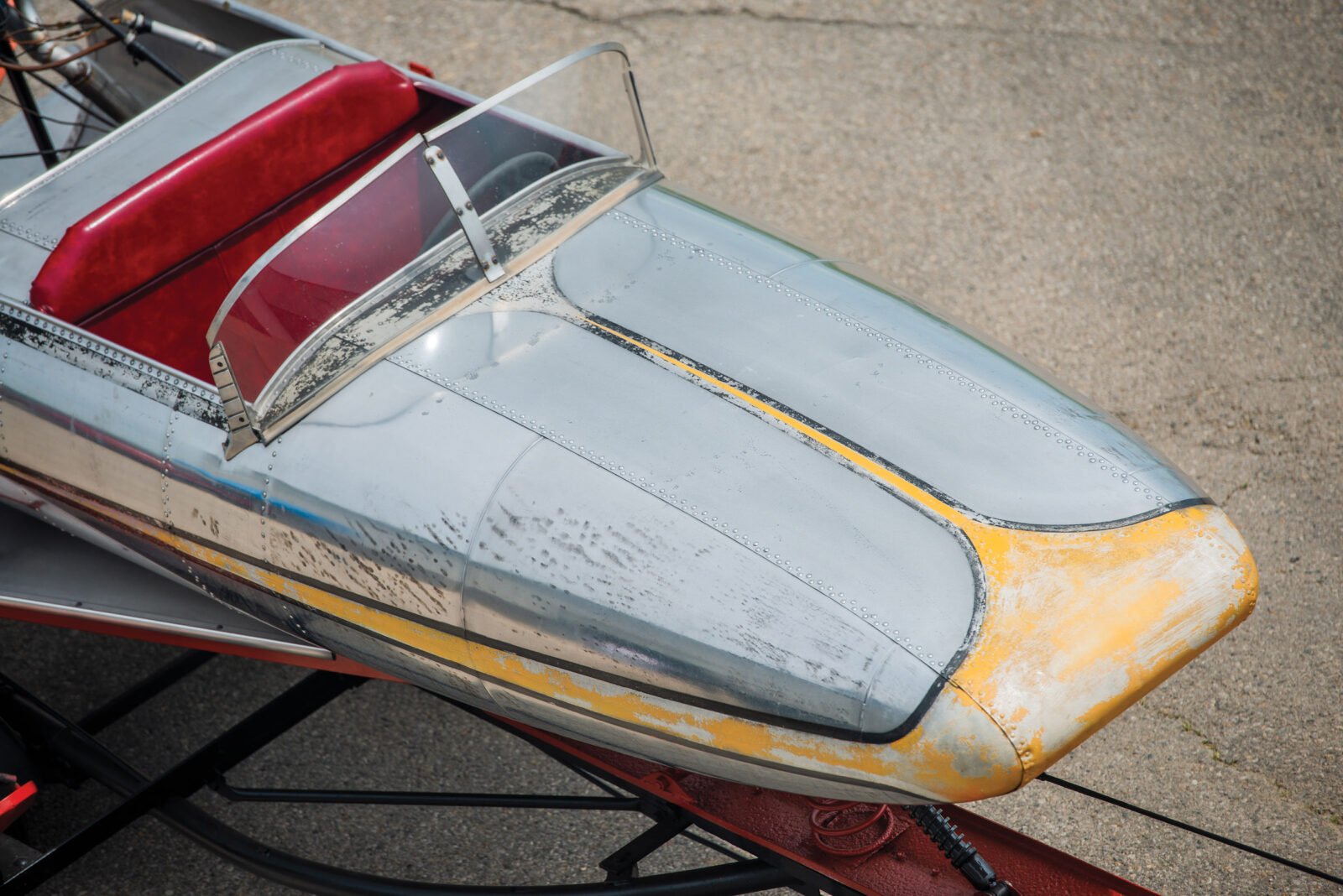 At first glance this 1958 Ice Speedster looks like a prop from one of the original Star Wars films. In fact I wouldn’t be at all surprised if George Lucas had encountered one and used it as a base for the X-34 Landspeeder driven by Luke Skywalker on Tattoine.

Those of you from the north may recognize this has a snow plane, they first started appearing in the 1910s, and by the 1930s people were building them from scrapped aircraft fuselages with the engine and propeller moved to the rear for a pusher configuration.

Some of the earliest examples weren’t called snow planes as the name hadn’t been coined yet, they were essentially just horse drawn sleds with the horse removed and a motor mounted on the rear, the names varied though auto sleigh, aero sleigh, and aero sled were the most popular.

Igor Sikorsky would later become famous for his critical role in the development of the helicopter, but long before he perfected flying he was building Sikorsky Sleds and driving them around Kiev – much to the amazement of the locals. 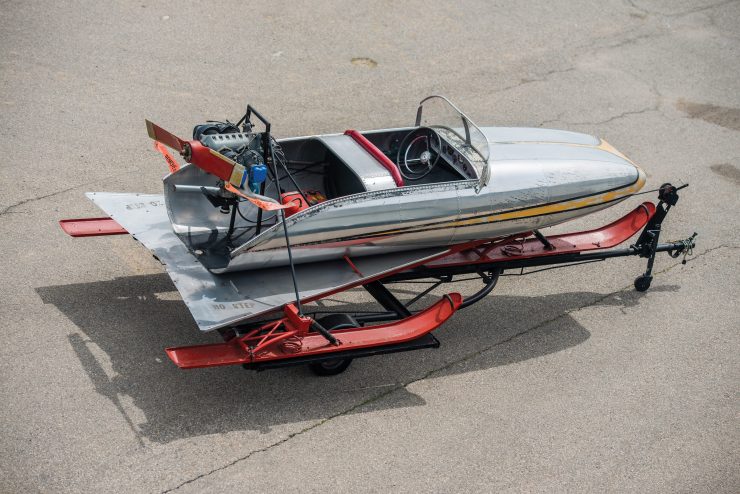 It didn’t take long for the potential military applications of snow planes to become apparent, the Russians built a variety of armored aerosleds including the NKL-26, a two-man sled powered by a five-cylinder radial engine with a top-mounted machine gun turret.

Due to the climates in Russia, Canada, and the northern United States snow planes become commonplace and fulfilled a vital role transporting people, mail, supplies, and doctors to remote homesteads and remote villages.

The majority of snow planes were built by farmers in their own sheds, however a number of companies did spring up offering production vehicles. This was before snowmobiles existed (as we know them today), and the speeds offered by snow planes meant that significant distances could be covered in record time. The only two caveats being that they don’t have any brakes, and you really don’t want to be wearing a long flowing scarf.

In the 1930s Bombardier developed a series of tracked vehicles with skis on the front for steering, they had a body similar to a bus allowing them to carry significant numbers of passengers or cargo. The designs continued to develop through the 1940s and by the 1950s snow planes were mostly being used for leisure, hunting, and fishing.

Surviving examples of original snow planes are now hugely collectible, and the vehicles have been enjoying a renaissance of sorts as winter leisure vehicles. 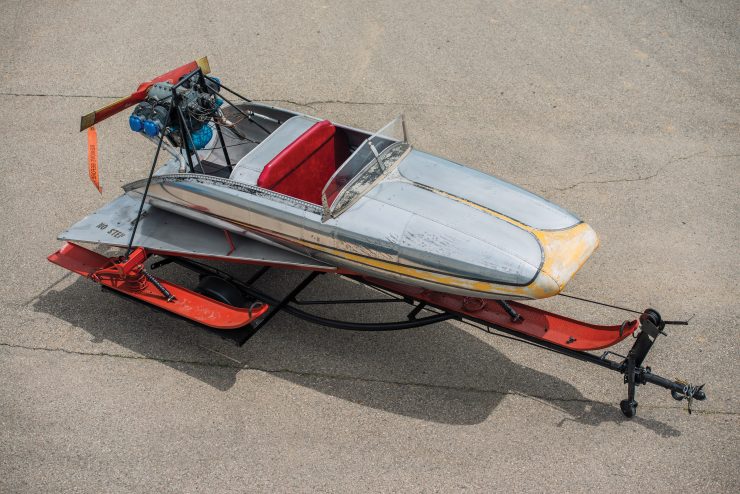 The snow plane you see here is almost a snow-bound version of a period convertible sports car. Though information on these vehicles is typically scarce this one appears to have an aluminum monocoque body, it has seating for two behind the somewhat minimalist windscreen, with the steering wheel on the left side operating the single front mounted ski.

All three of the skis are independently sprung with a coil spring, they also have front-mounted shock absorbers to cope with the undulating terrain, and there’s a slow slung delta wing presumably for stability.

Power is provided by a rear-mounted, air-cooled, four-cylinder Continental airplane engine with a wooden propeller, engine capacity and horsepower is currently unknown though anything from 60-100+ hp is possible.

Top speeds on some snow planes exceeded 100 mph, a heady pace considering the unpredictable terrain. This one was built for a hotel on Lake Houghton in Northern Michigan, it has a Quicksilver throttle control, and a repurposed Ford steering unit.

RM Sotheby’s estimate the hammer price at between $25,000 and $30,000 USD, which seems like a steal for something this unusual, not to mention the potential fun factor for those who live in climates where it could be used each winter. 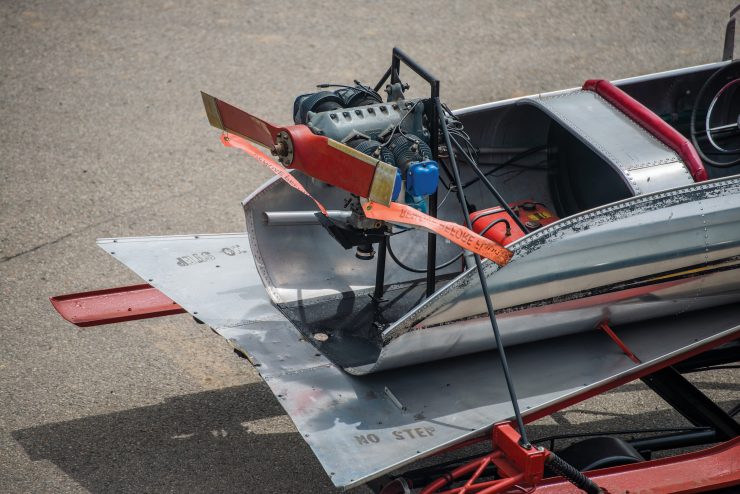 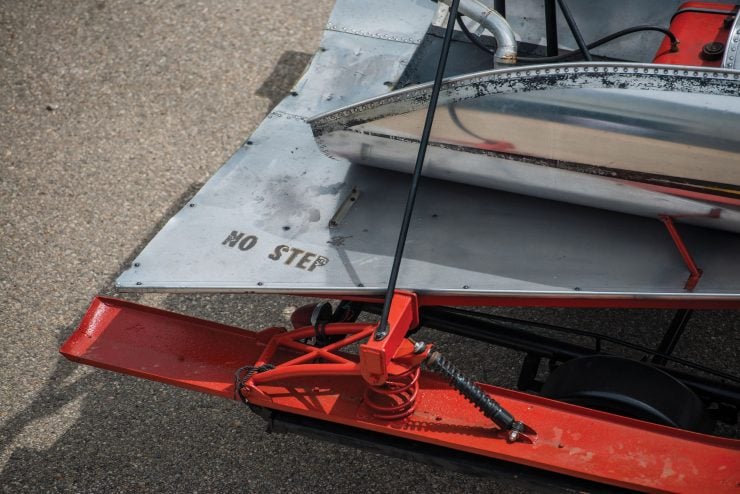 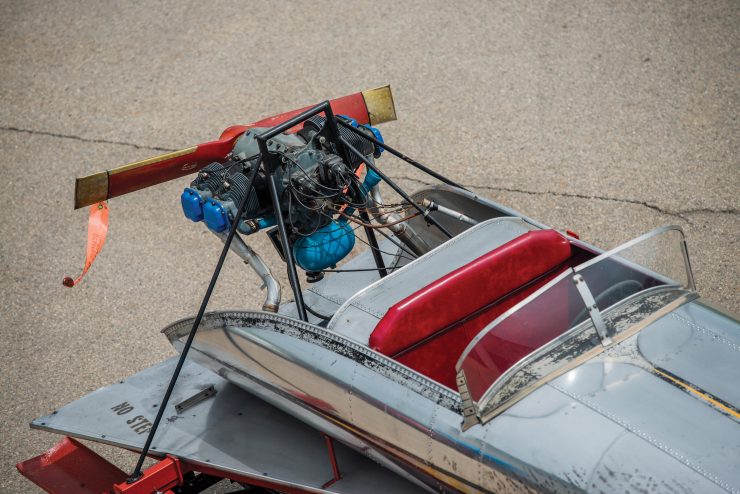 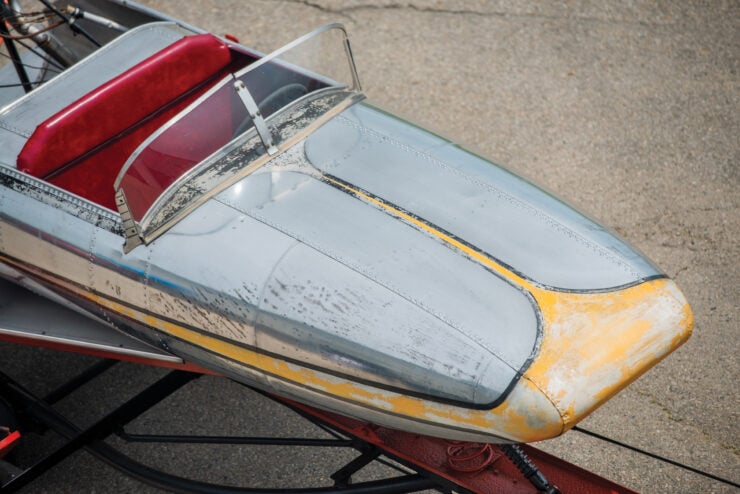 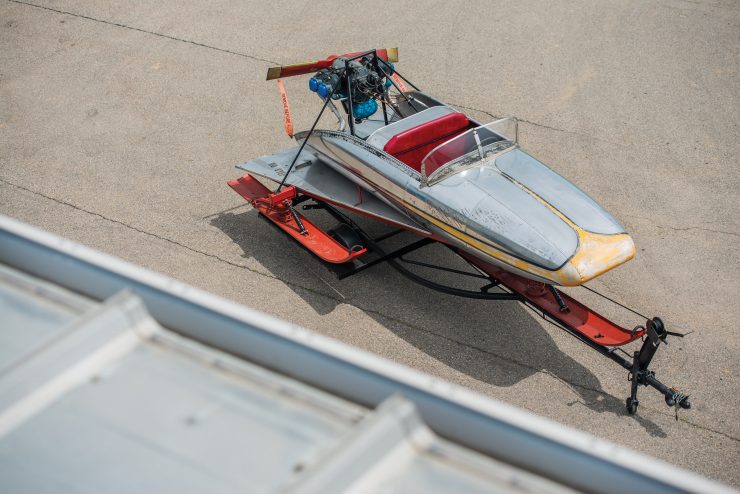 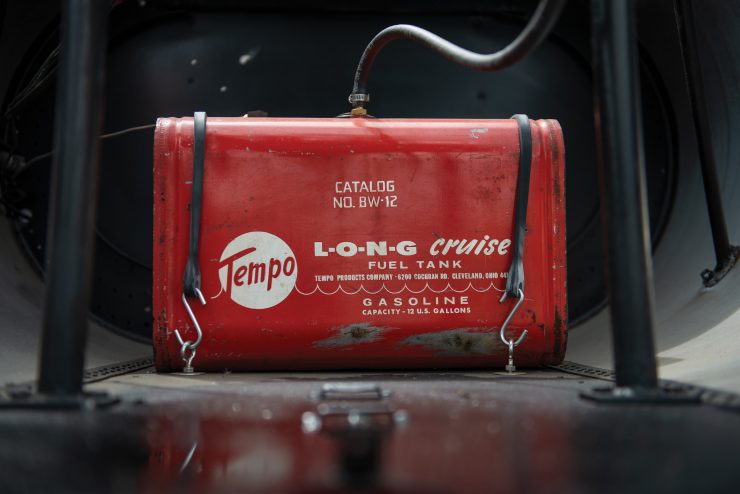 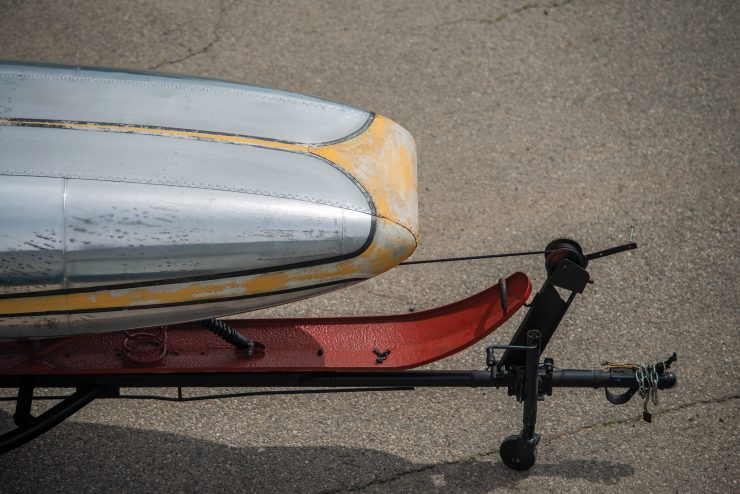 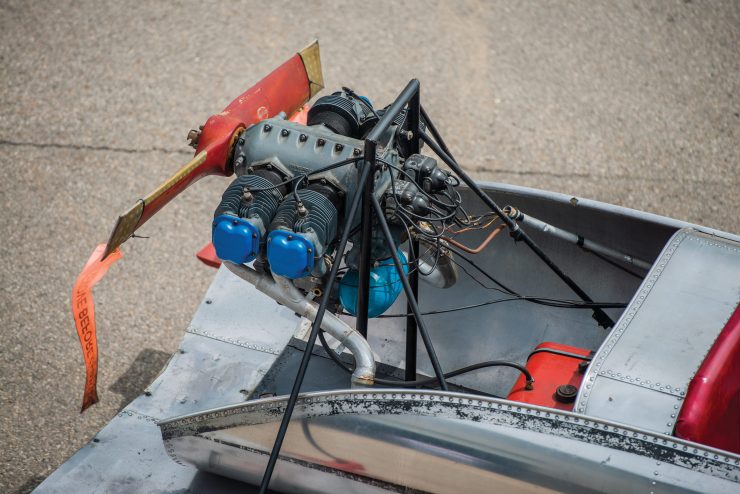 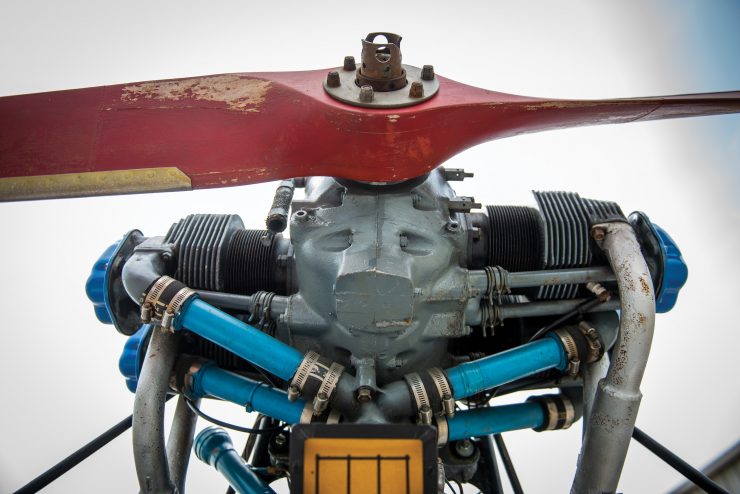 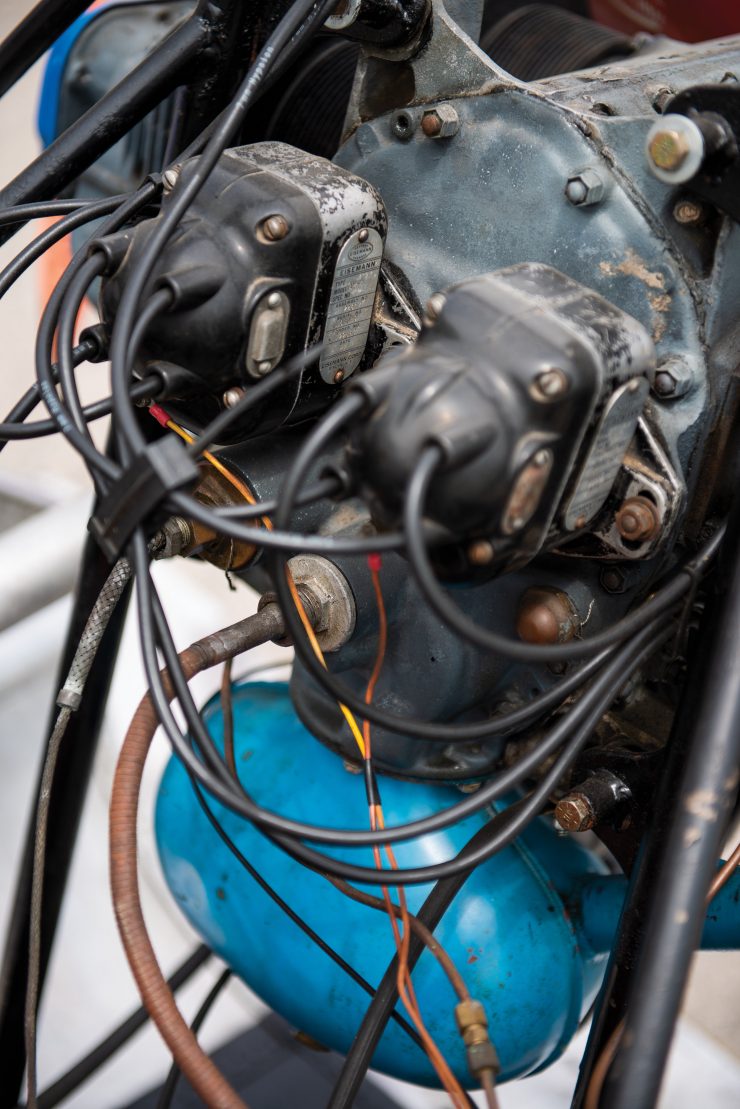 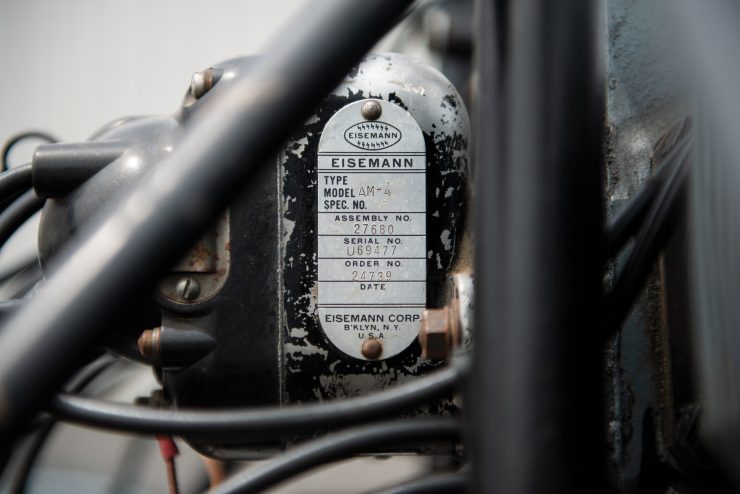 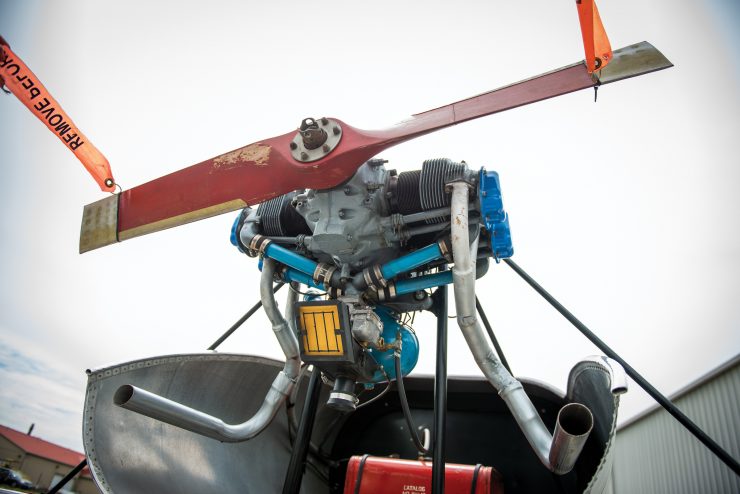 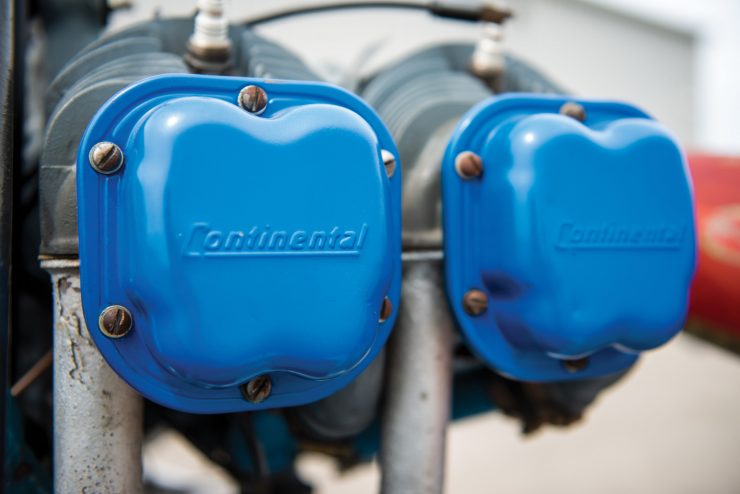 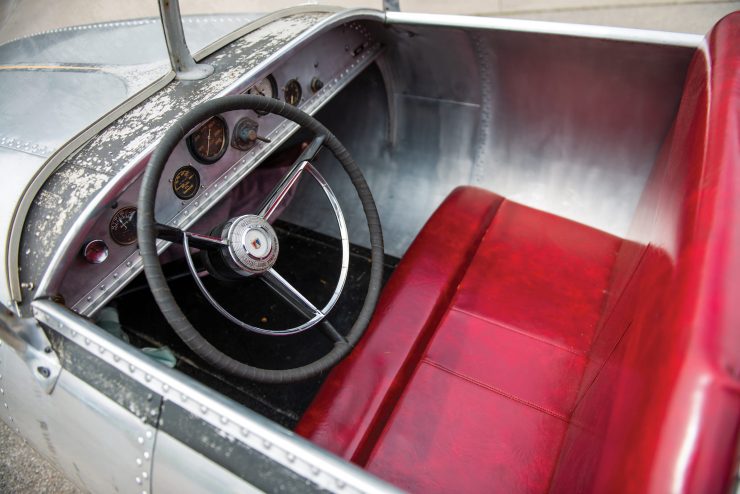 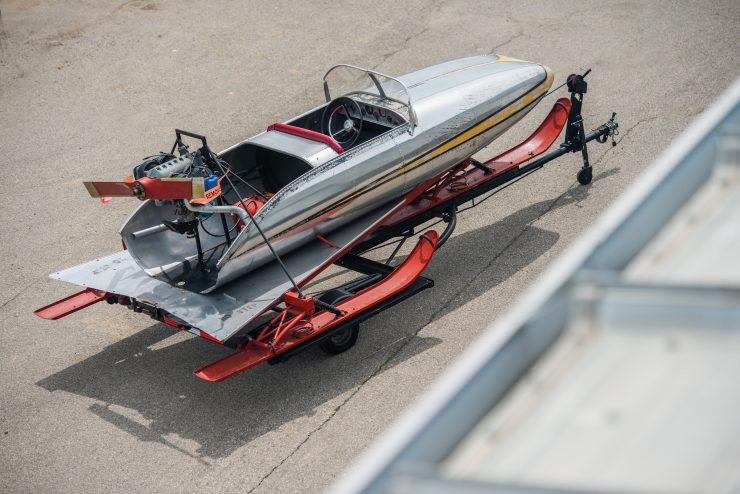 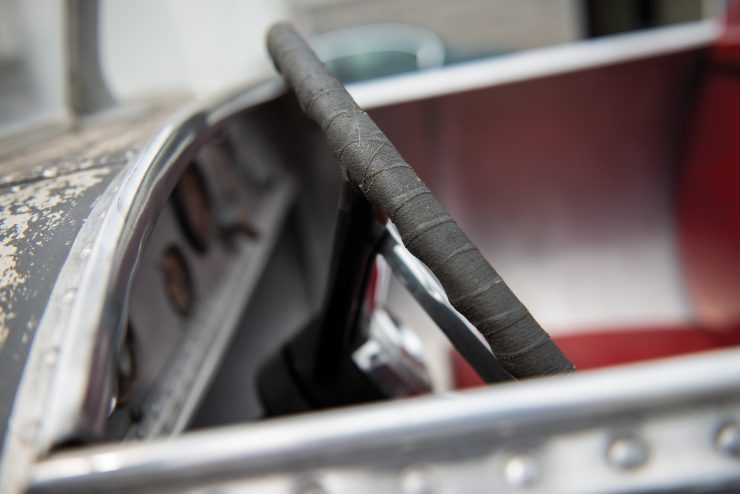 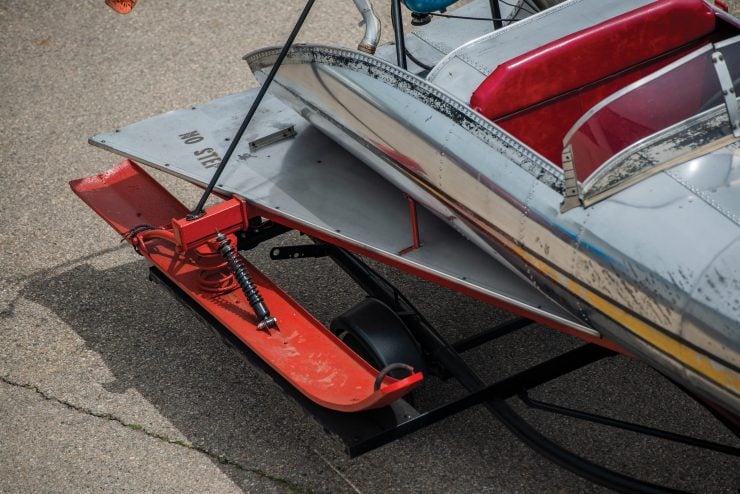 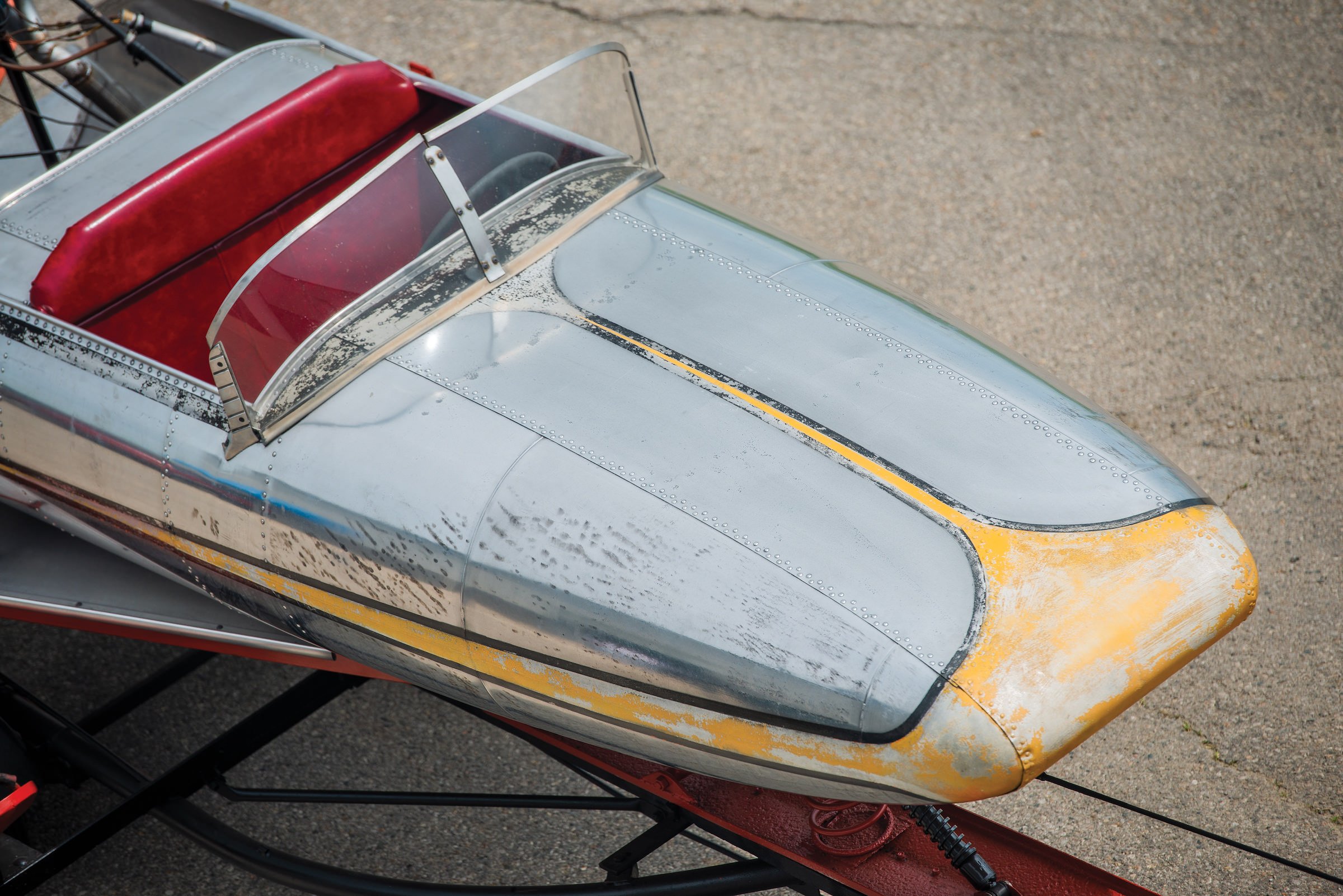 This 1944 North American P-51D Mustang is currently for sale, it’s in the midst of a full restoration – once complete it will…

The Black Ghost: Street Racing Legend is a new documentary from the American Historic Vehicle Association about a 1970 Dodge Challenger R/T SE ordered…

This is an original set of Bugatti EB110 wheels, they’re coming up for sale with RM Sotheby’s and as you may imagine they cost more…

Sir Elton John is not a man famous for his discreet fashion sense or shy on-stage persona, so it should probably come as no…