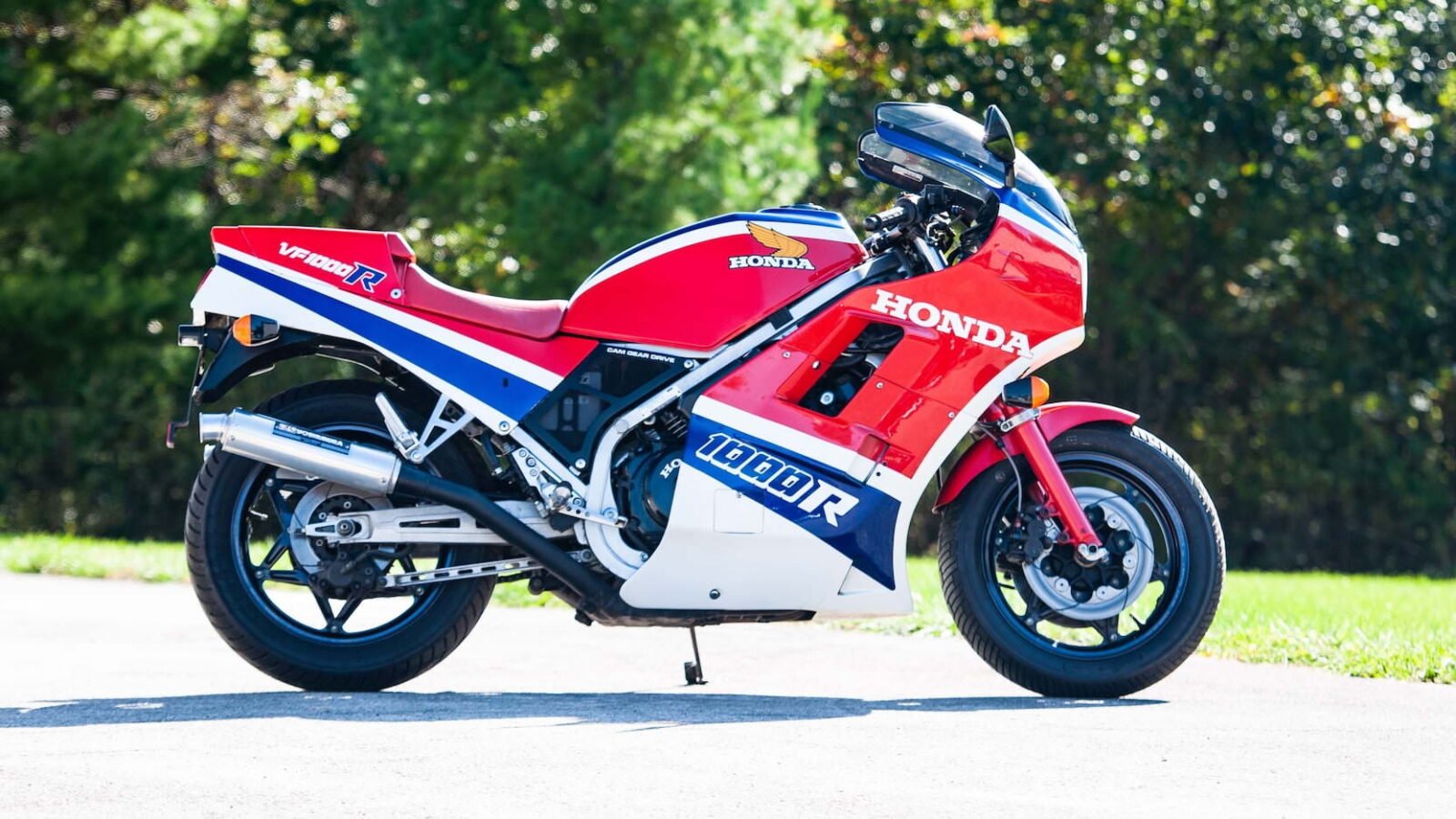 The Honda VF1000R was the high performance member of the Honda VF1000 model family. All models had an advanced V4 998cc double overhead cam 16-valve, liquid-cooled engine but the VF1000R had a series of modifications to boost power and bring the bike closer to the Honda FWS1000 race bike which was competing in the Daytona 200 and AMA F1 class.

The most famous modification that was made to the V4 in the Honda VF1000R was the addition of gear driven camshafts. The VF1000 utilised chain driven cams, so a broad series of changes were required to create the VF1000R, particularly to top end.

The use of straight cut gears means that the VF1000R makes a very particular whining sound when running that’s typically loved by its owners, but well-meaning passersby have been known to stop and explain to the rider that their bike “doesn’t sound right”. 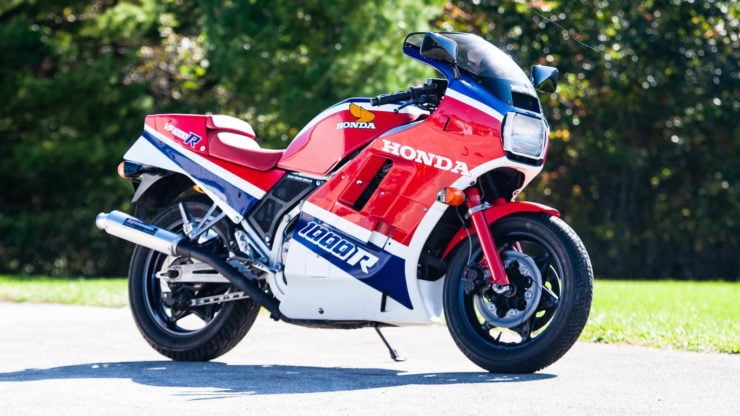 Honda first introduced the VF1000R in Europe in 1984 with 122 bhp at 10,000 rpm and 66 ft lbs of torque at 8,000 rpm. This was an impressive power figure for the era, however more impressive was the sheer volume of advanced engineering that Honda had squeezed into the model.

The 90º V4 had a 77.0 x 53.6mm bore x stroke with a compression ratio of 11:1. Four 36mm CV type carburettors were fitted, on the other side of the head there are four headers into two exhausts, which exit one per side at the rear. 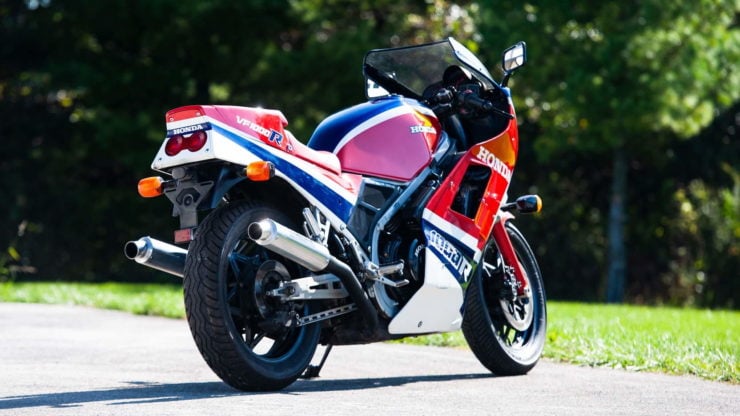 Some magazine reviewers in the 1980s did criticise the bike for its very committed riding position, the foot pegs are rearsets and the adjustable clip-on handlebars do necessitate the rider leaning reasonably far forward. That said, compared to modern superbikes the riding position is standard if not a little more relaxed.

In the mid-1980s the Honda VF1000R claimed the “fastest production motorcycle in the world” title with a recorded top speed of 150 mph, a title previously held by the MV Agusta Monza which was later claimed by the Kawasaki GPz900.

Finding good examples of the VF1000R that haven’t been crashed or ridden hard by their former owners is getting harder with each passing year.

The 1985 model you see here is one of the cleanest examples we’ve seen for a while and it’s due to come up for sale with Mecum in January. If you’d like to read more about it or register to bid you can click here. 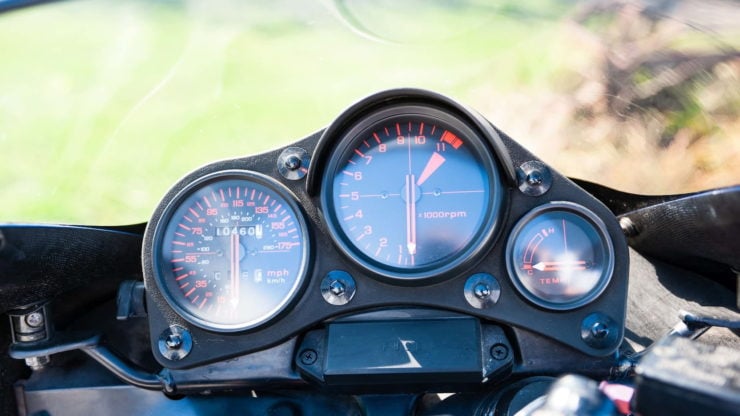 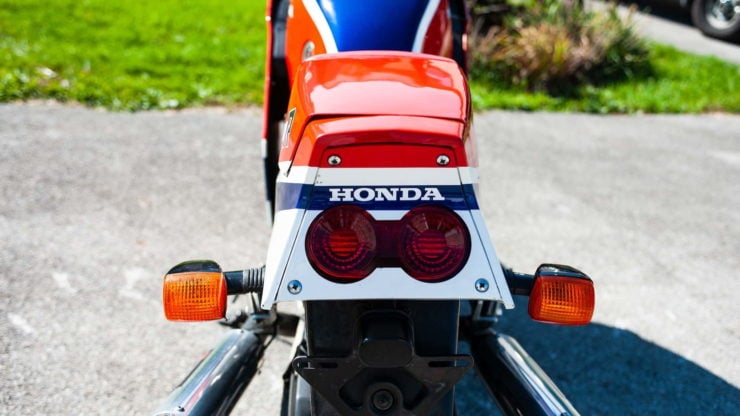 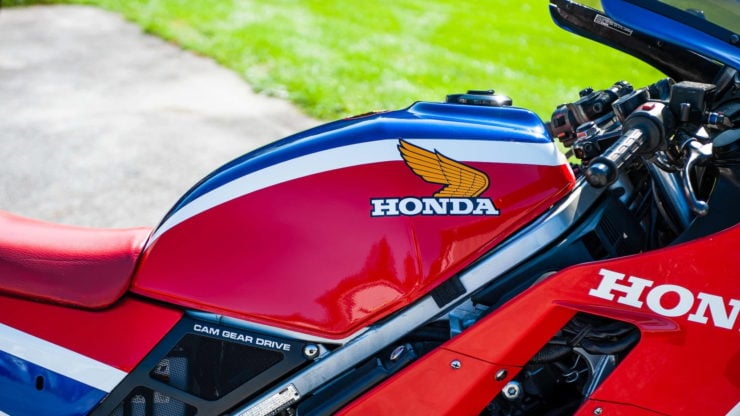 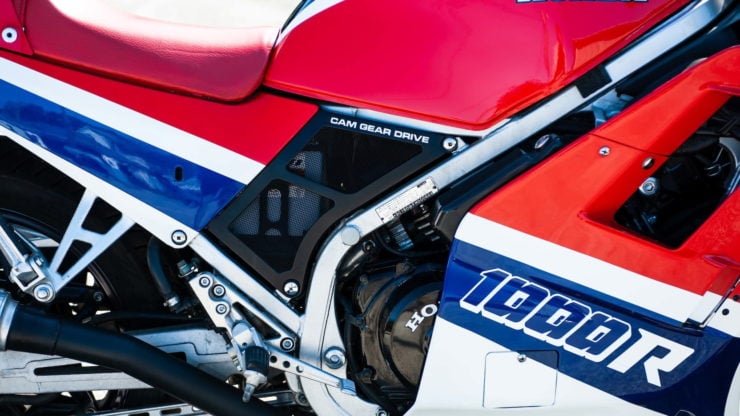 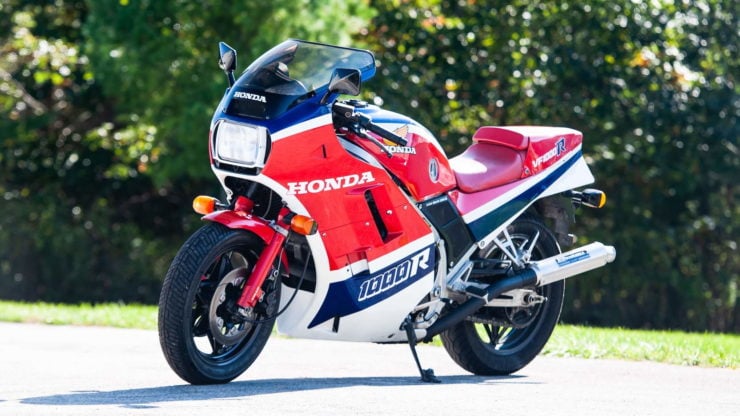 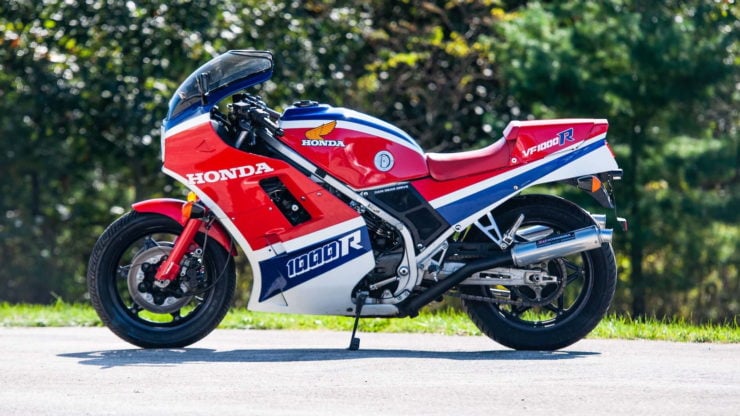 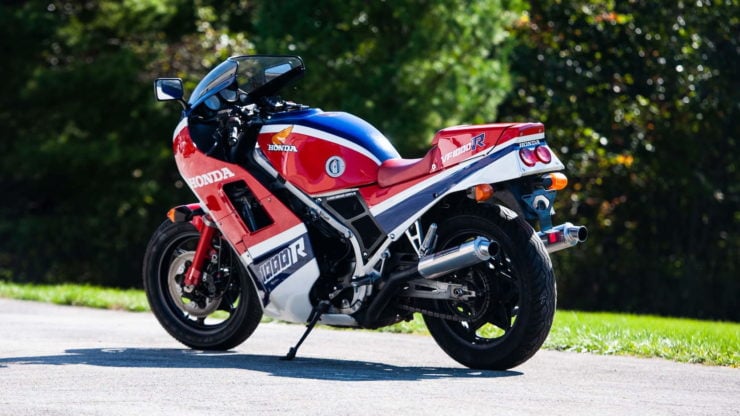 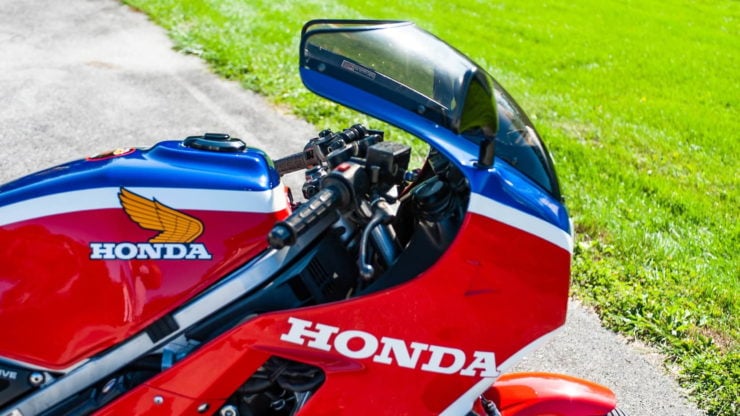 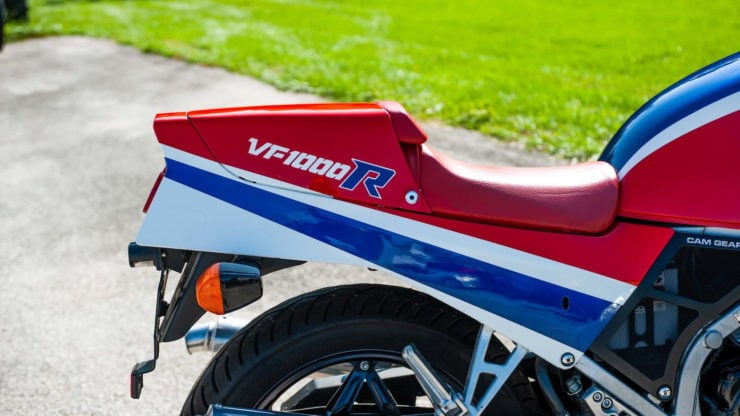 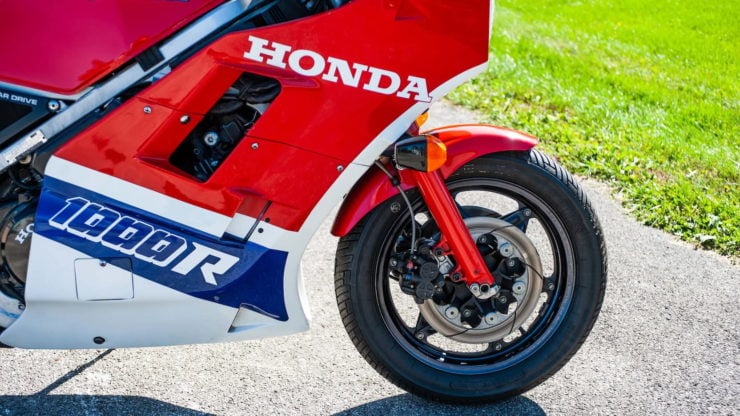 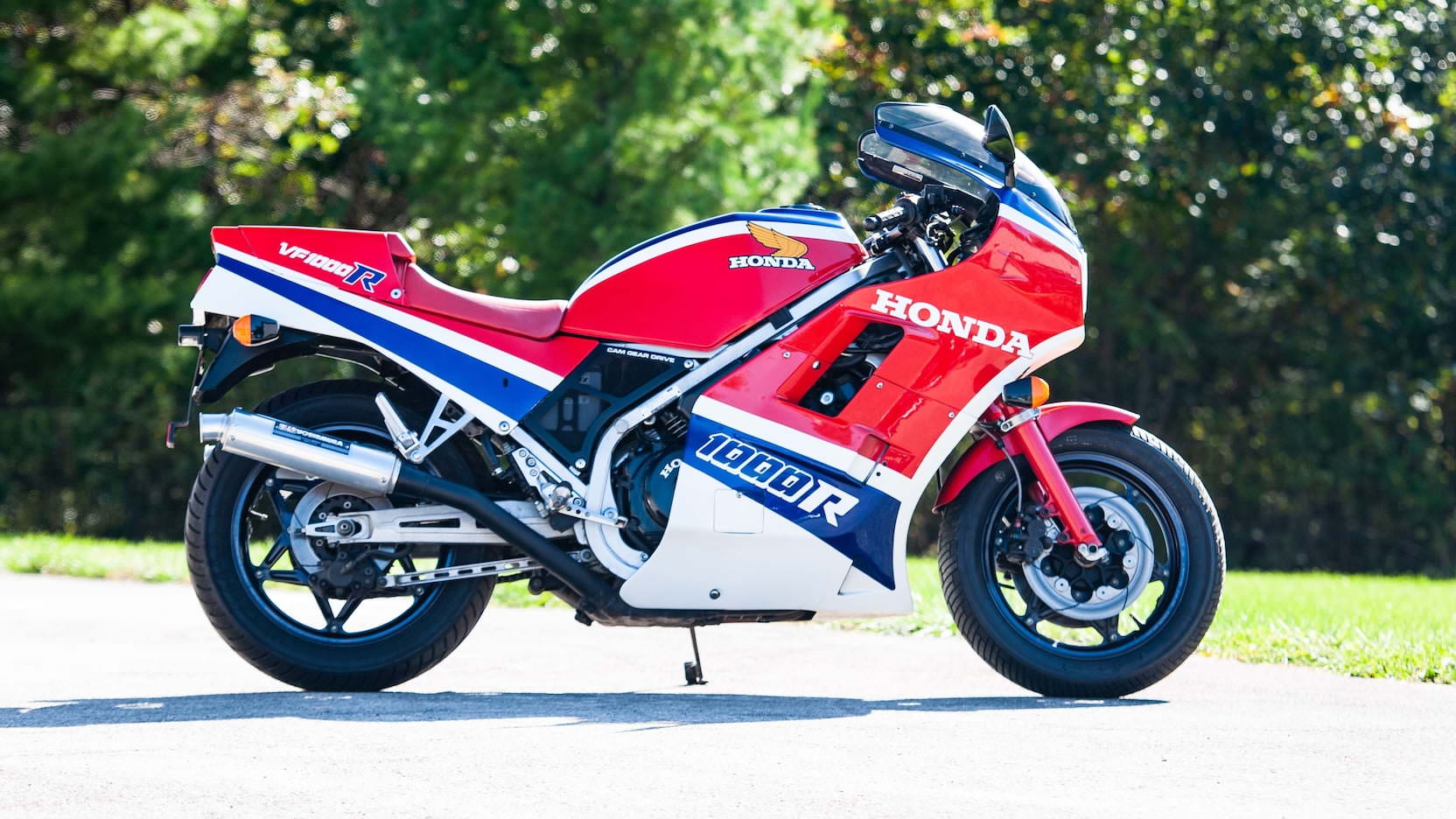