The above will take a few seconds to load, trust me when I tell you it’s worth it. Once it’s loaded, click the arrows to navigate.

Technology never ceases to amaze me, especially when it gives me a chance to digitally wander the hallowed halls of the “Honda Collection Hall”, a three storey museum dedicated to Honda’s two, three and four-wheeled model history.

The historical machines from Honda’s street and racing past are displayed at the manufacturer-owned Motegi racing circuit, this is a long way away from where most of us live and as a result, most people won’t be able to make the pilgrimage to see the collection. But now thanks to digital witchcraft and Google Streetview you can walk the halls. Without the jet lag. 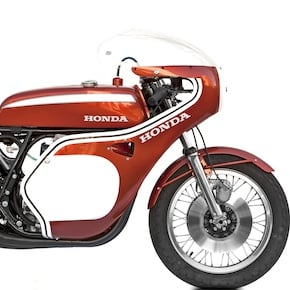 Editor’s Note: We now have an answer to this, please see the new addendum under the…

Although you’d never know it looking at the bike now, this custom BMW started out as…