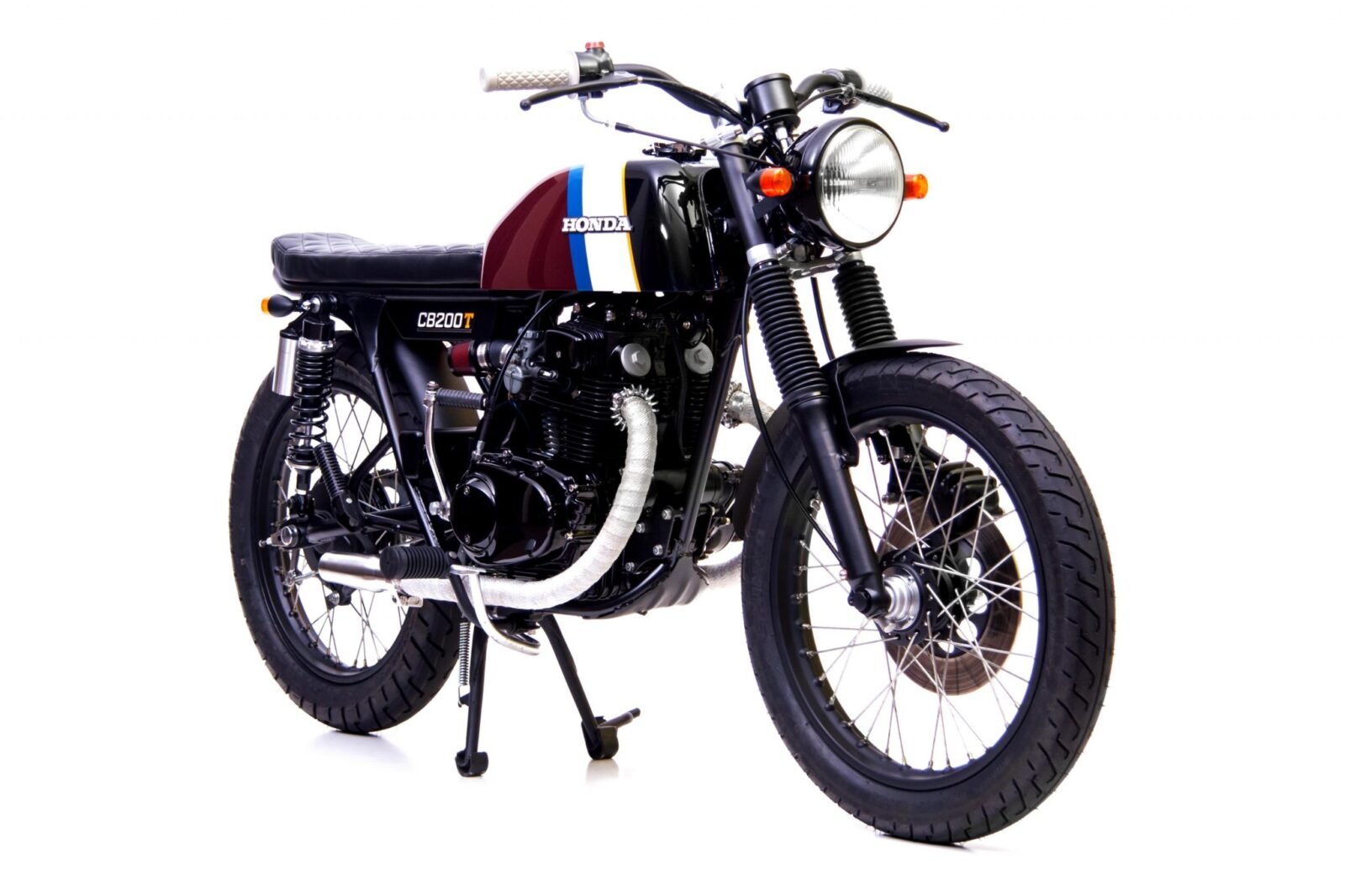 The Honda CB200 was released in 1973 as a replacement for the CB175, both bikes were popular with young men, particularly teenagers, who couldn’t afford a CB750 but wanted the closet thing they could get.

A Brief History of the Honda CB200

Honda sold the CB200 between 1973 and 1976, depending on which country you’re in the locally available models could be labelled CB200A, CB200B, CB200K, or CB200T. The “A” model was available earlier in the model run and was used to refer to bikes with a front drum brake. “B” models had a cable operated front disc.

In the early to mid-1970s Honda was an almost unstoppable force in the world of high-performance motorcycles, and the halo-effect created by models like the Honda CB750 caused other smaller-engined Hondas to enjoy a boost in popularity.

Much like the CB175 before it, the CB200 was fitted with a parallel twin cylinder engine with a single overhead camshaft, two carburetors, a 5-speed gearbox (unit construction), and a chain final drive. There are a set of telescopic forks up front, twin shocks in the rear, a rear drum brake, and either a drum or disc up front. 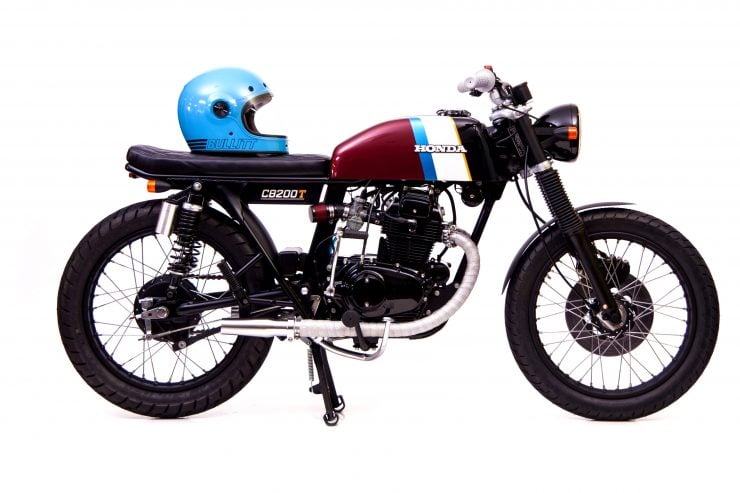 As with many of their CB models, Honda also offered a “CL” version of the 200. The CL200 was a scrambler-specification variant with a high-exhaust with heat shielding, braced handlebars, a smaller fuel tank, and a thicker seat. Of course the actual off road ability was limited, but it was certainly capable of tackling gravel roads and the occasional fire trail.

Although the model was only sold for 4 years there are still a lot of them about. Thanks in part to their reliability, and also thanks to the fact that they were made in huge numbers. Although there’s a certain amount of glamour to be had riding large-engined motorcycles, there’s a lot to be said for lightweight bikes – particularly if you’re using them for urban transportation.

The tidy little CB200 you see here is the work of James Fawcett, though to be fair it’s a bit of a family affair as his son contributed and his mother helped out by upholstering the seat. There aren’t many customs that were built by three generations of the same family – in fact I think this is the first one on Silodrome.

Honda’s CB200T was never a high performance machine. It was a simple, reliable, unassuming bike that could get you from point A to point B without much fuss. Nowadays it’s a 40+ year old, grin-inducing piece of nostalgia that reminds you what fun it can be to hop on two wheels, twist the throttle, and ride. – James Fawcett 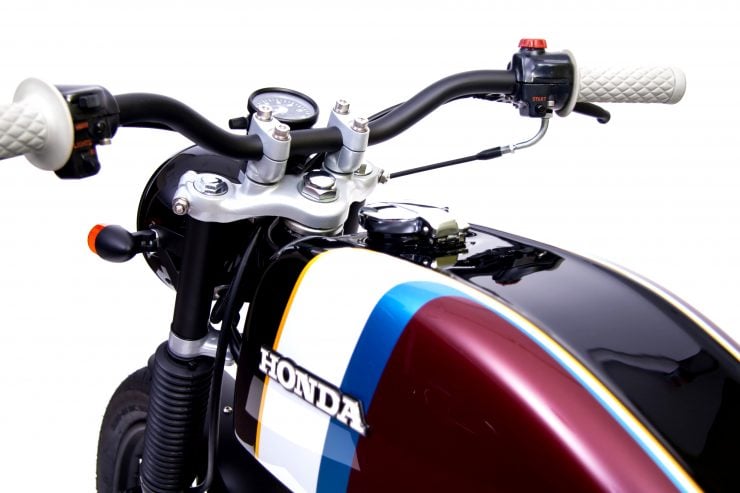 The build process started with a full teardown and an inspection of parts. The engine was in top condition, as was the gearbox, so it was decided to focus on improving the looks and functionality. Motorcycle designers have their hands tied in many ways by everything from safety and emissions regulations to satisfying the concerns of the bean counters, so it’s often the custom versions of their production bikes that actually capture their original intent – as custom motorcycle builders are unencumbered by middle management, accountants, or soulless government bureaucracy.

James has worked in fields from graphic design to auto body repair, and this build utilized almost all of his skills. The rear subframe was rebuilt with a new seat loop and seat pan, the original air and battery box was removed and replaced with a smaller bespoke unit with a “CB200T” graphic down the side.

New slimline front and rear fenders were fabricated to replace the somewhat chunky originals, and a pair of adjustable piggyback shocks were added to upgrade handling. A new LED headlight was added with a smaller speedometer, subtle indicators, and a new LED brake light tucked up under the seat.

James decided to fit slightly larger more modern tires, which necessitated a lengthened centre and side stand – to avoid having the bike keel over when parked. The original Keihin carburetors were rebuilt and fitted with pod air filters, and a new set of wrapped exhaust pipes closed out the built.

When the original designers of the CB200 set out to create a new model, this is very likely what they actually wanted to build. A simple, punchy, lightweight bike that’s fun to ride and unlikely to get you in trouble with the boys in blue. 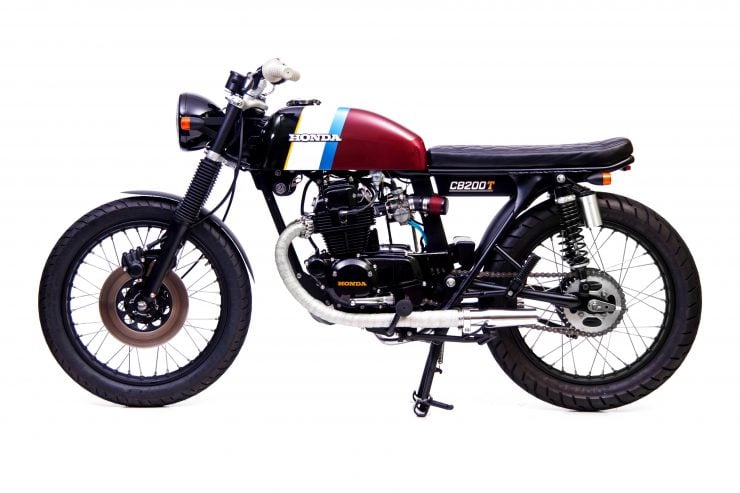 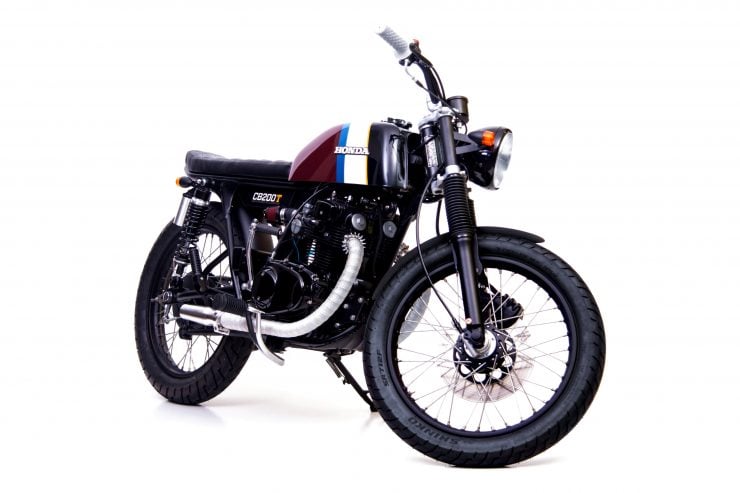 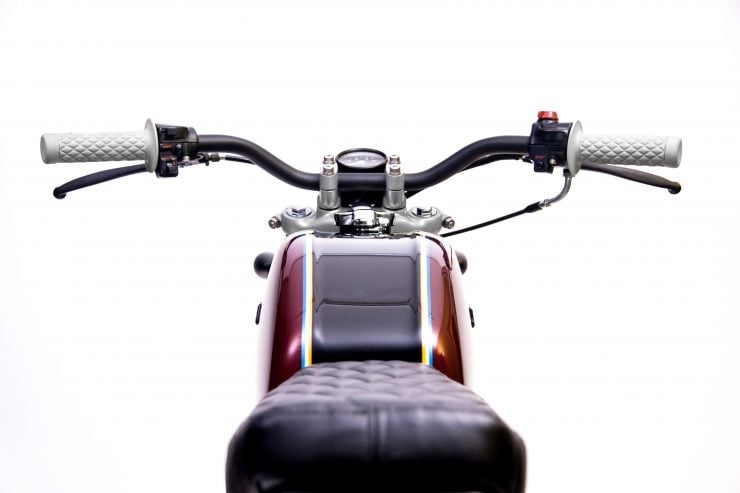 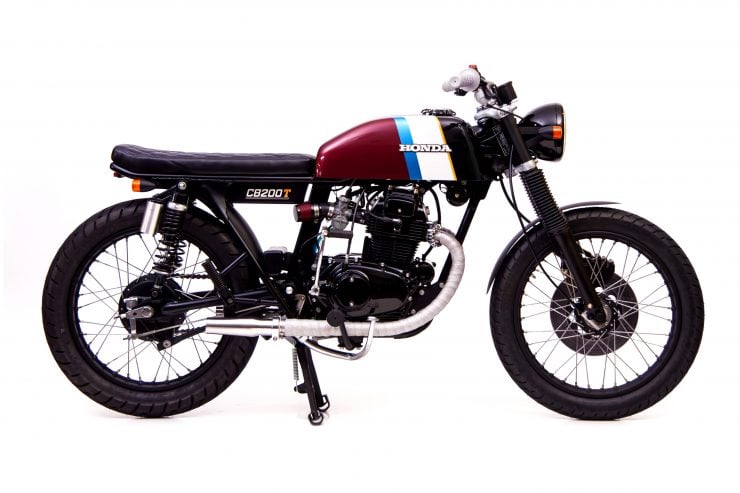 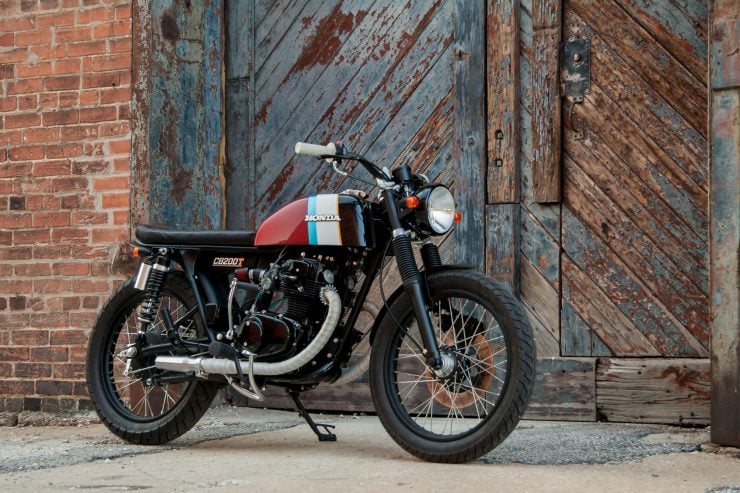 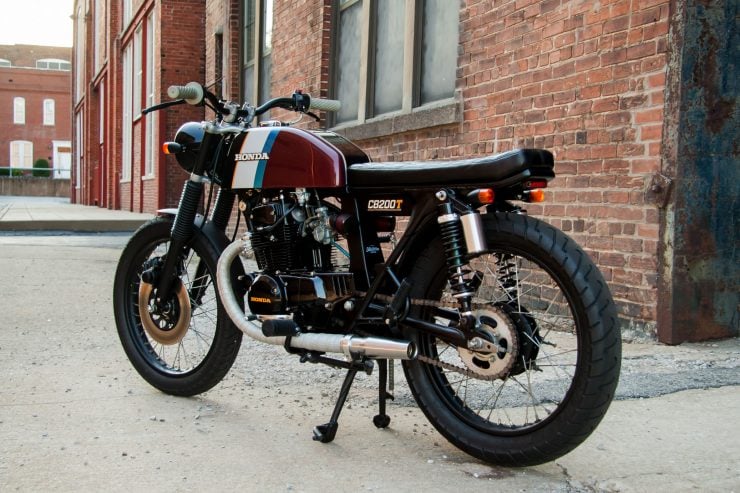 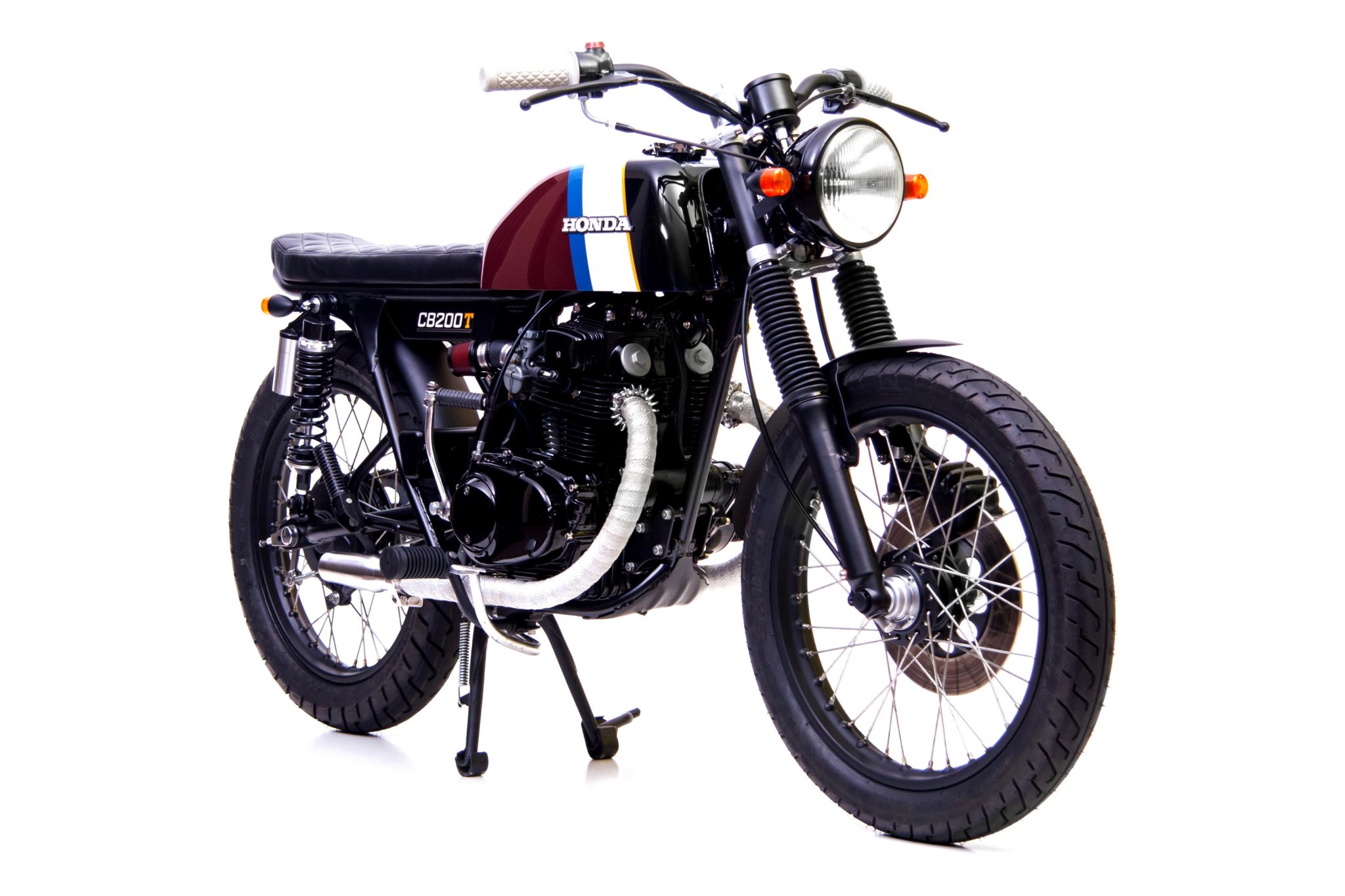