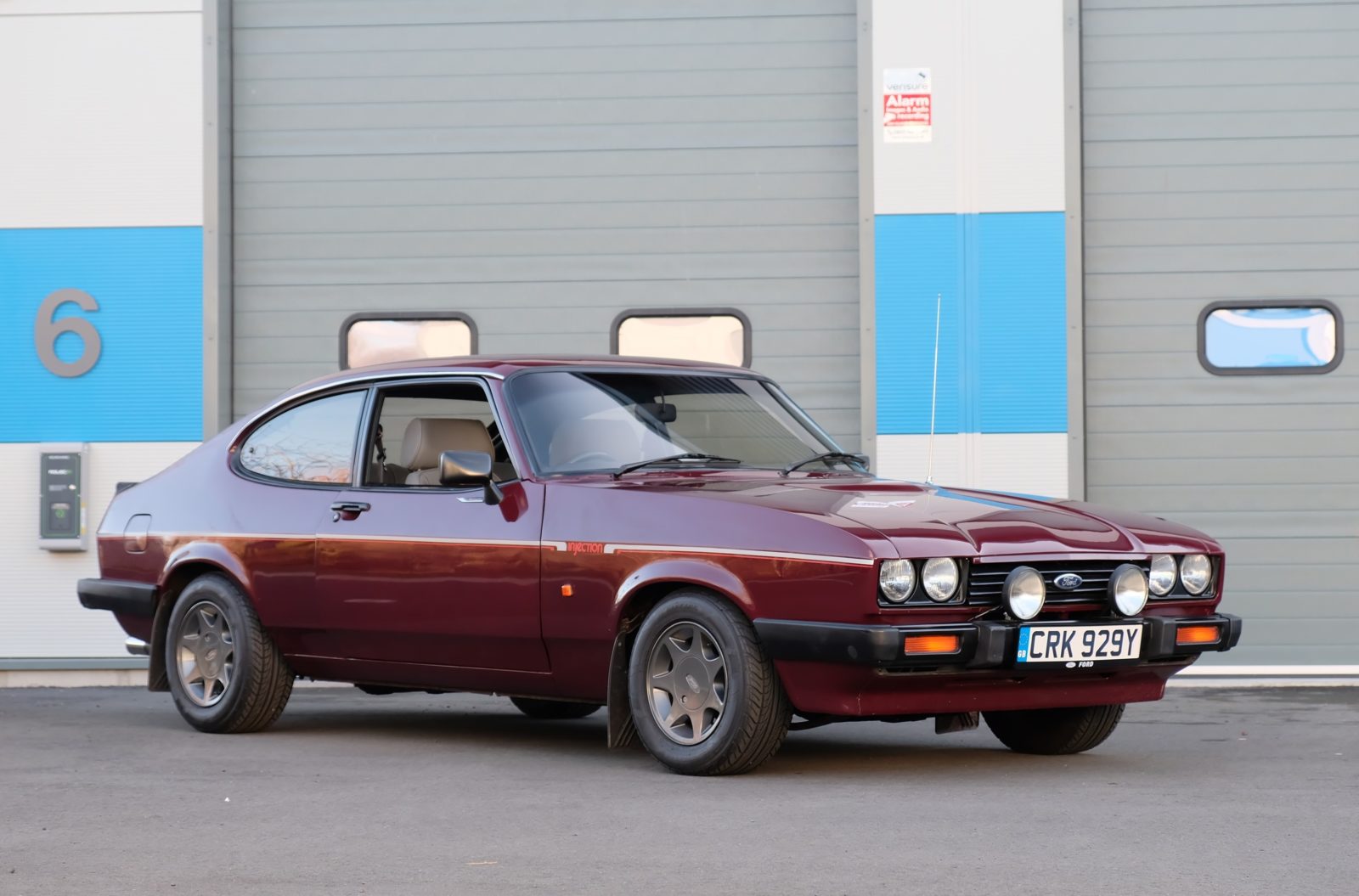 The Ford Capri was originally intended to be named the Ford “Colt,” an equine reference to the venerable Ford Mustang. Ford hoped that the Capri would mirror the American success of the Mustang and in many ways it did, becoming one of the most popular sports cars in Europe.

The Capri was developed, engineered, and built entirely in Europe by Ford’s European and British subsidiaries. It was designed by American Philip T. Clark, who worked on the design team of the first Mustang.

The incredible sales success of the Ford Mustang in the United States had almost taken the automaker by surprise. When it was first released they anticipated 100,000 annual sales however actual sales figures exceeded 400,000 units in the first year alone. 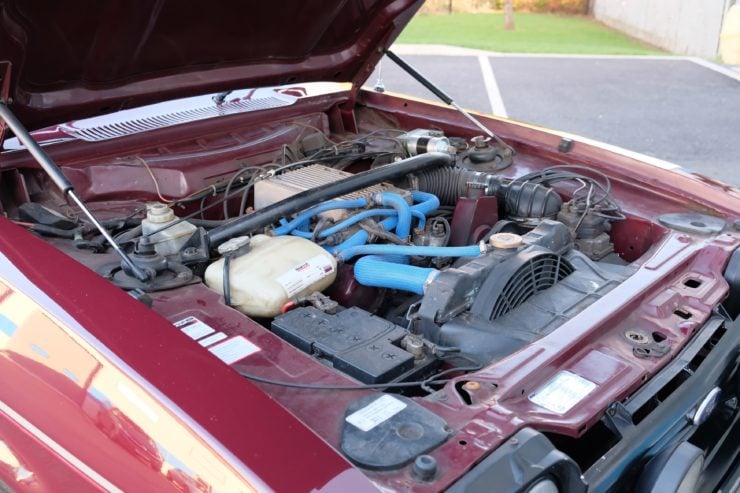 This Capri is fitted with the desirable 2.8 liter fuel-injected Ford Essex V6, an upgrade over the earlier carburetor-fed engine, the fuel-injected engine offered more power and better reliability.

While Ford were enjoying this success they began to wonder how they could replicate it in their second biggest market – Europe. Gas guzzling V8s were never going to be mass-produced best-sellers in Europe due to higher fuel prices, and the physical size of the Mustang was likely too big for European tastes at the time.

What Ford needed was a smaller, more fuel efficient Mustang that made use of pre-existing Ford engines and parts as much as possible to help keep development and production costs as low as possible.

They originally intended to call the car the “Colt,” however Japanese automaker already had this name trademarked, so they went with Capri instead.

A design team led by American automotive designer Philip T. Clark came up with what we  now know as the Mark I Ford Capri. The car was designed with a steel unibody and it made extensive use of Ford Cortina parts, including the front MacPherson struts and the live axle on leaf springs in the rear.

A number of engine options were offered depending on where the Capri was being built – production took place at the Halewood factory in the UK, the Genk factory in Belgium, and the Saarlouis and Cologne factories in Germany. 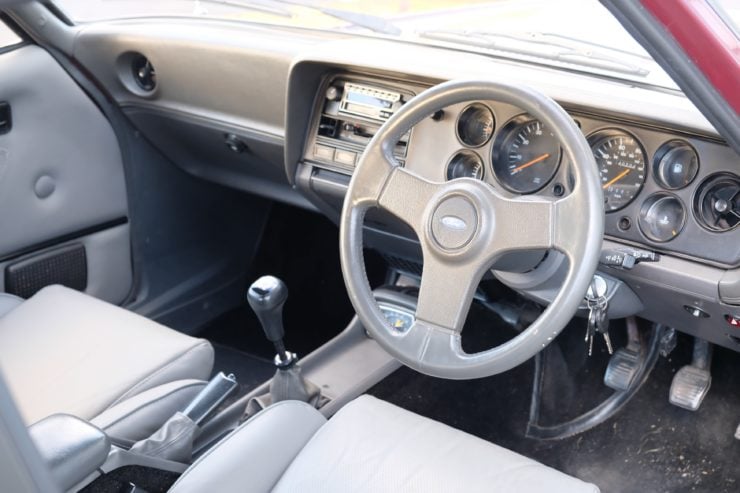 The interior of the car has a classic ’80s feel to it, it’s still fitted with the original stereo and it comes with the 5-speed manual transmission.

Over the course of its production run the Capri would be offered with over a dozen engines starting with the 1.3 liter Kent inline-four and range through the Taunus V4, Cologne V6, Pinto inline-four, all the way up to the 6.0 liter Windsor V8 that was fitted to the South African Perana version.

Ford would keep the Capri in production from 1968 until 1986, selling almost 2 million of them and creating a car that is looked on with all the affection of the Mustang within the European classic car community.

The car you see here is a desirable Ford Capri 2.8 Injection model, as the name suggests it has a 2.8 liter fuel-injected engine – the Essex V6.

This engine was chosen as the replacement for the outgoing carburetor-fed 3.0 liter Essex V6 which could no longer meet increasingly strict emissions requirements. 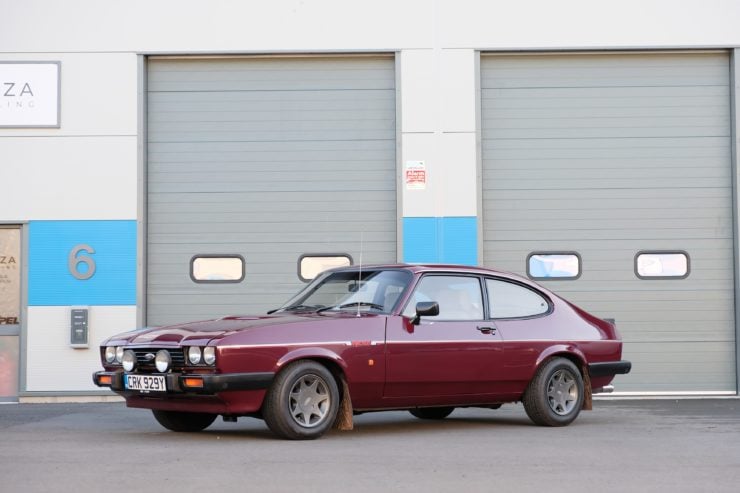 The fastback styling of the car was influenced by the Mustang, but not so much so as to look like a clone. The Capri would go on to become one of the best selling European sports cars of its time.

In standard trim the 3.0 Essex V6 produced 148 bhp, the newer fuel-injected 2.8 liter unit produced a claimed 158 bhp, it was also easier to start in cold weather and it proved more reliable over all.

The Capri shown here is fitted with the 5-speed manual transmission and it’s finished in Burgundy with a Grey leather interior featuring Recaro sport seats.

A number of jobs were completed on the car in 2019 including the fitment of replacement track rod arms and ends, a replacement clutch, front discs, pads and calipers, fan belts, oil pump and tappets, as well as a full service. 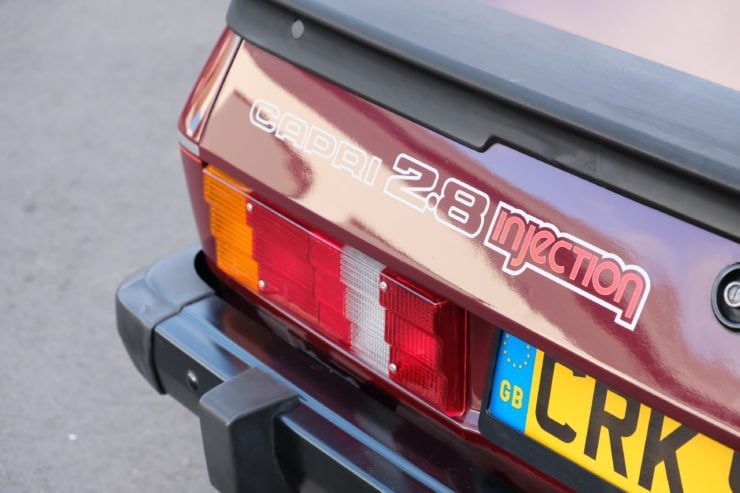 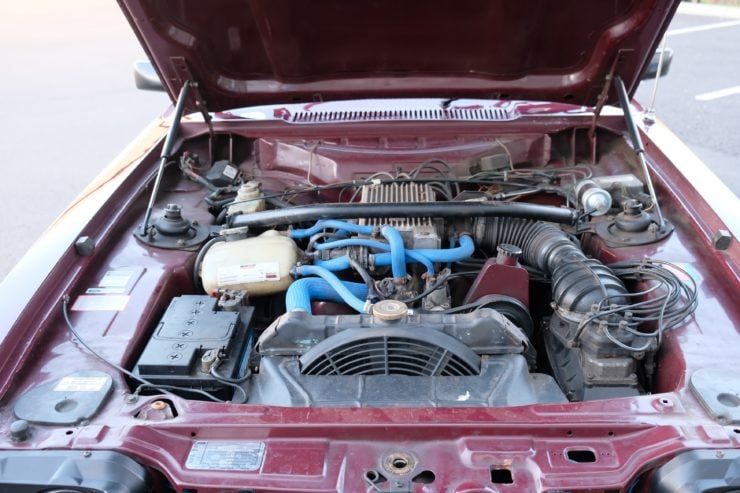 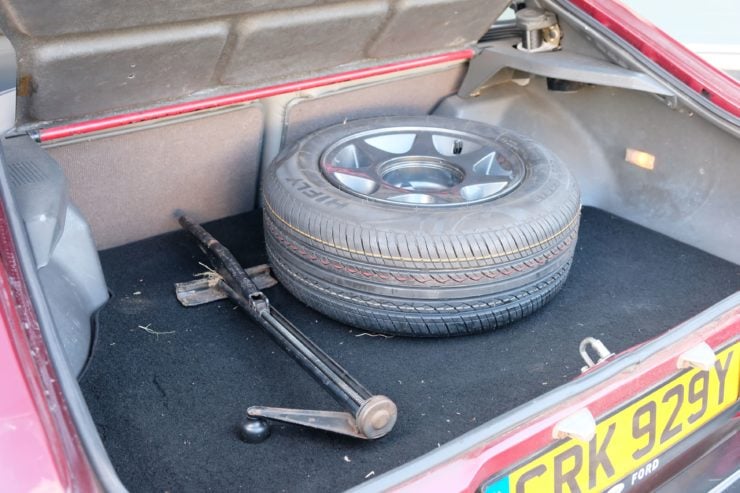 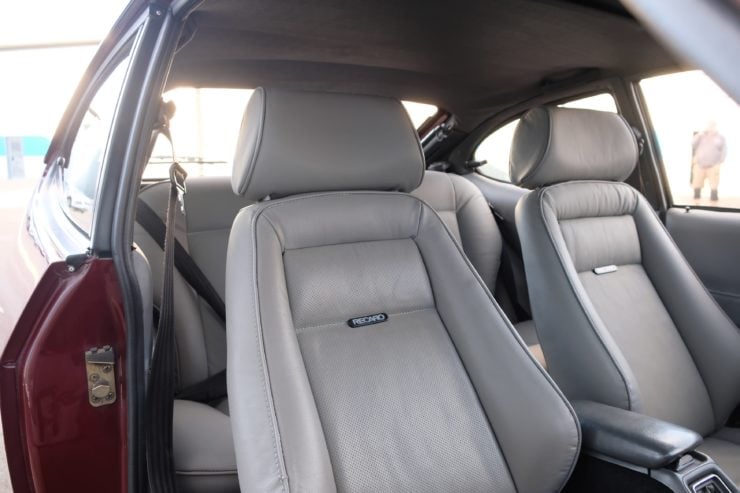 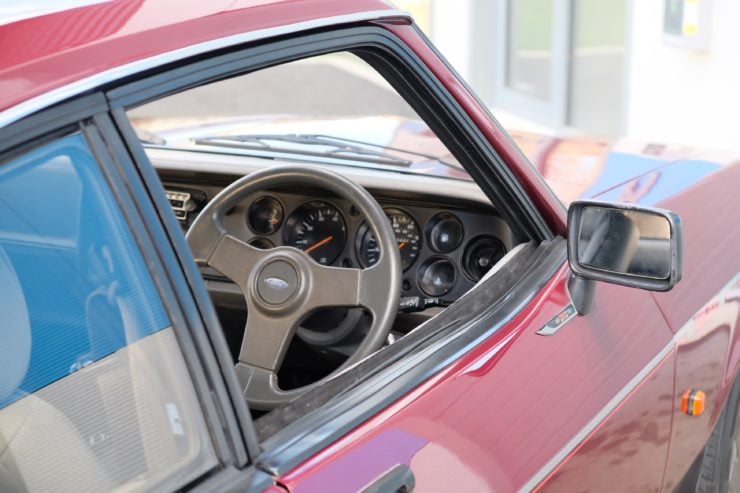 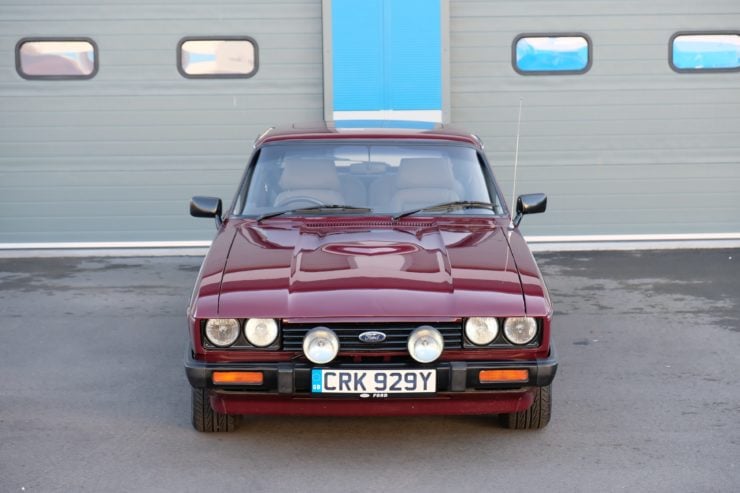 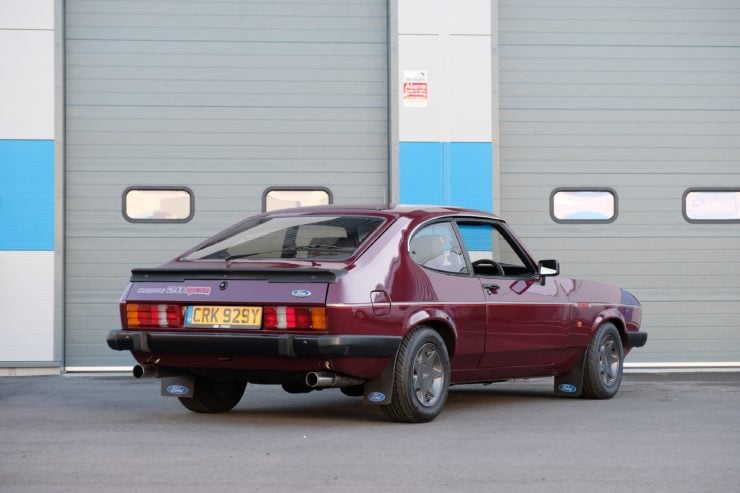 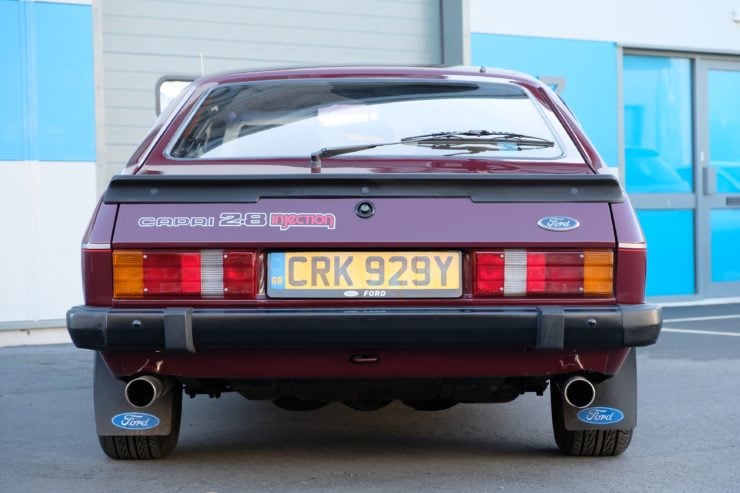 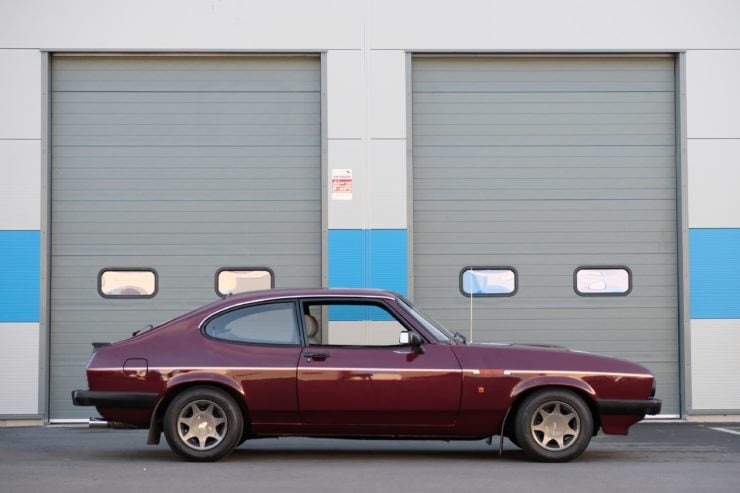 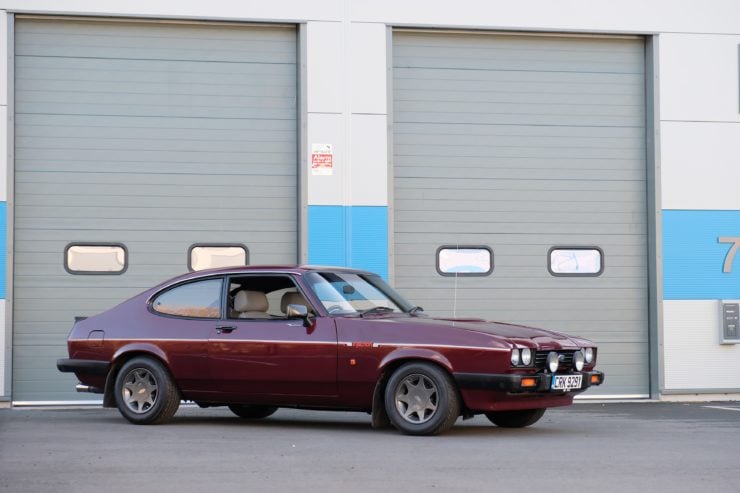 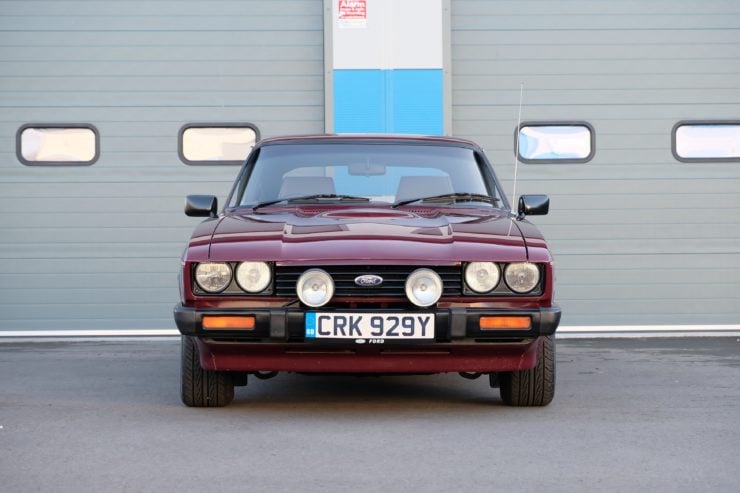 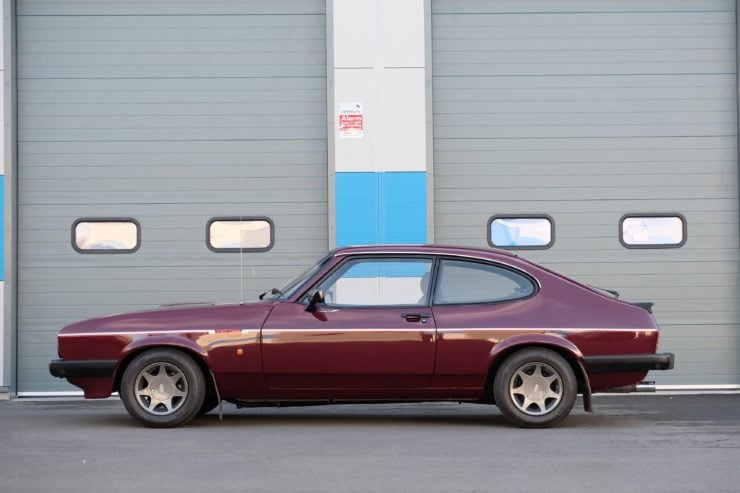