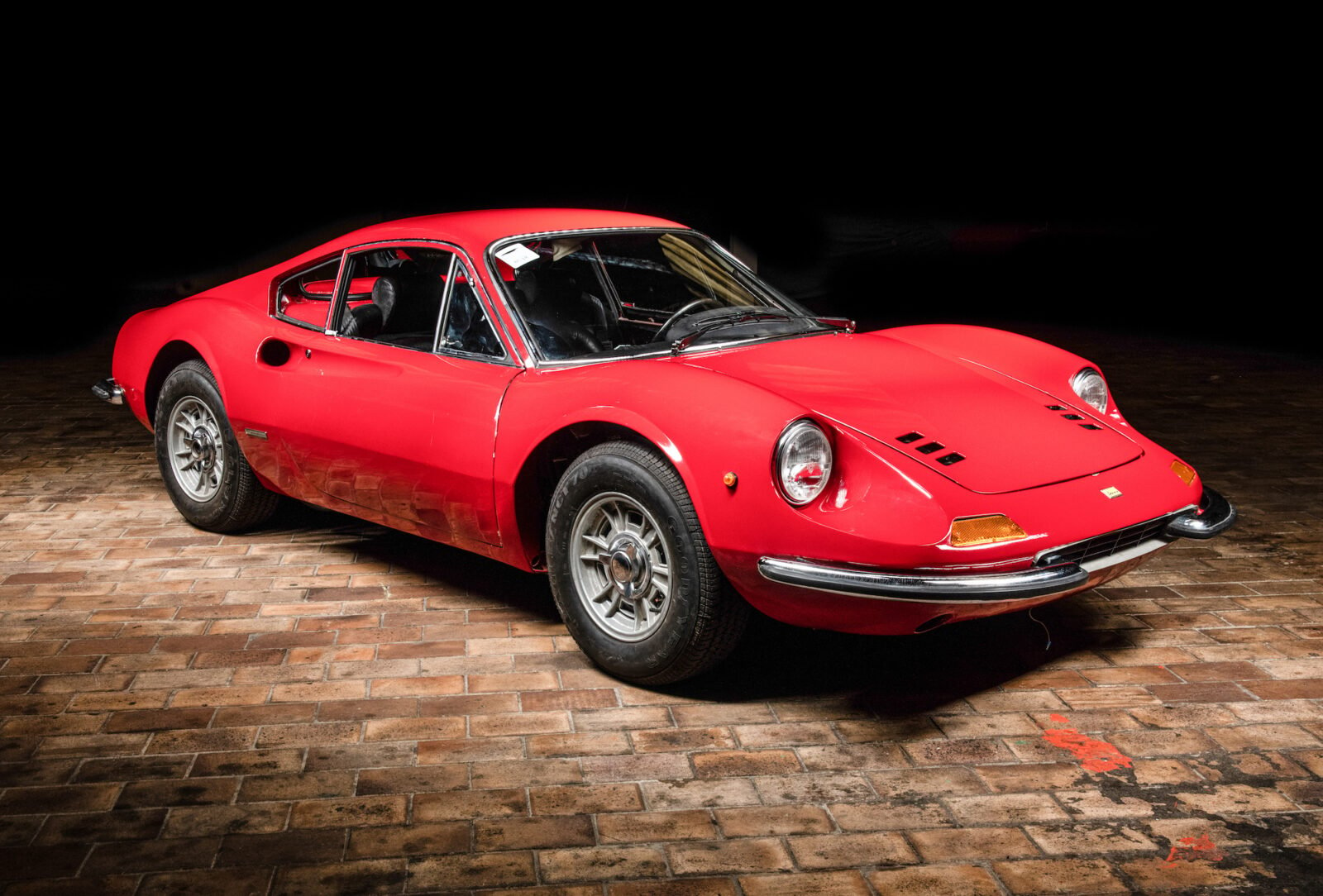 The Ferrari Dino 206 GT was developed with the express purpose of homologating its 2.0 liter V6 Ferrari engine for use in Formula 2 racing. In order to qualify a minimum of 500 needed to be made each year, which posed a significant problem for Ferrari.

There was no way the Italian automaker could manage that kind of volume, so a deal was struck with Fiat allowing them to use the engine in their own Dino sports car which would easily meet the 500 per year homologation requirement.

The release of the flat-six powered Porsche 911 in 1964 and its subsequent sales success was a clear sign to Ferrari that there was a large market for a smaller, less expensive sports car powered by a six-cylinder engine. 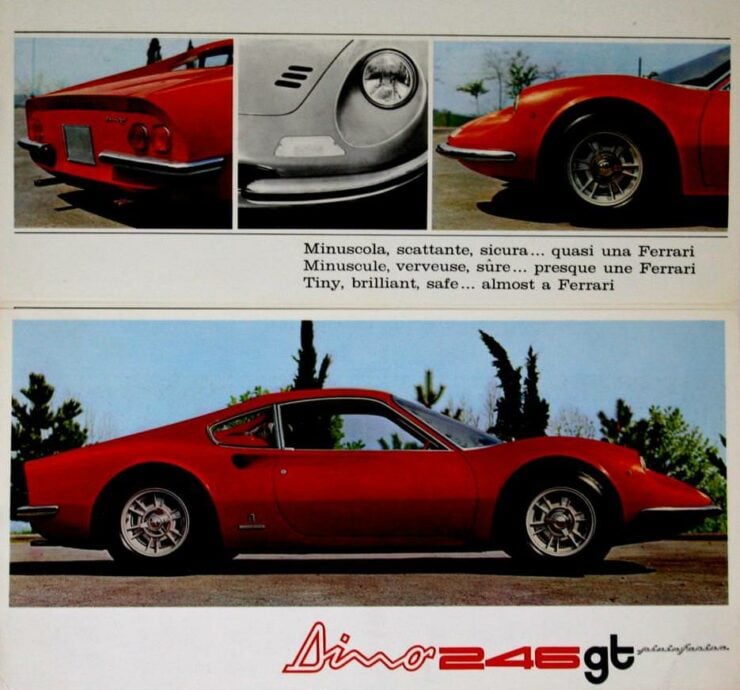 The period advertising for the Dino 206 GT marketed it as “Tiny, brilliant, safe… almost a Ferrari” – later on in the production of the Dino 308 GT4 the Ferrari name would be affixed to the model for the first time.

Ferrari’s bread and butter production cars at the time were all powered by hefty V12s and they were priced well out of the realm of reality for all but the wealthiest individuals.

With the Porsche 911 firmly in their sights the Dino was born, named for Enzo Ferrari’s son Alfredo “Dino” Ferrari, who had been an engineer working on V6 designs at the time of his death in 1956 from Duchenne muscular dystrophy.

The first production car in the new Ferrari sub-marque was the Dino 206 GT with its impossibly beautiful curved lightweight aluminum body styled by Aldo Brovarone and Leonardo Fioravanti at Pininfarina. 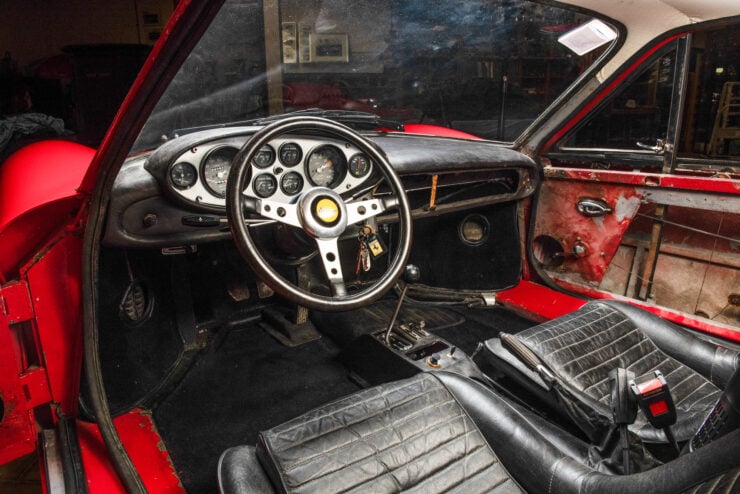 This car requires a rebuild before any spirited driving is attempted, though given that it’s one of the rare early 206 GT Dinos there should be no shortage of buyers.

Power was provided by an V6 mid-mounted transversely behind the driver and passenger, sending power to the rear wheels via a 5-speed gearbox. This engine was said to be a descendant of the V6 that Dino himself had been working on at the time of his death.

It was an advanced 65º V6 design, with double overhead cams per bank, a lightweight alloy block and heads, a 9:1 compression ratio, and a blistering 8,000 rpm redline. It was claimed to produce 180 bhp and 138 lb ft of torque (at 6,500 rpm) however cold water has been thrown on this claim, as the identical Fiat Dino V6 had a claimed output of just 160 bhp.

The top speed of the Dino 206 GT was 146 mph (235 km/h), quicker than the comparable Porsche 911, and although the Porsche owners may deny it the Dino was also better balanced due to the location of the engine.

Just 153 examples of the Dino 206 GT were built between 1967 and 1969, after which it was replaced with the steel-bodied Dino 246 GT and GTS which was heavier but powered by the more powerful 2.4 liter version of the Dino V6. 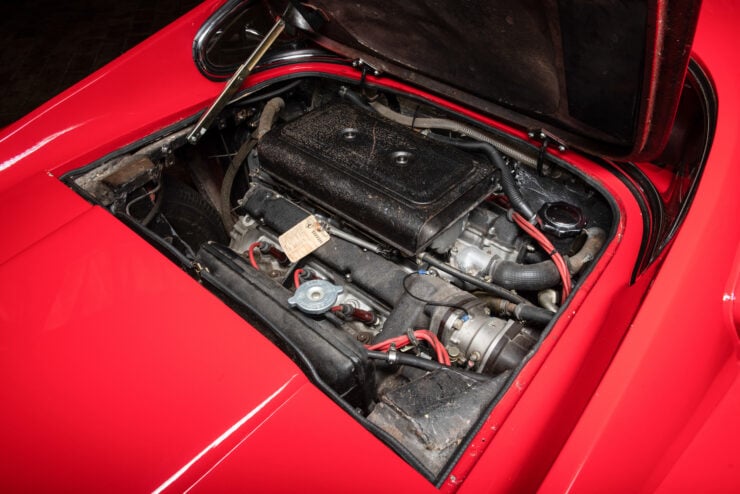 The V6 fitted to this car is not the original numbers-matching unit, it’s an otherwise identical engine that was fitted to one of the Fiat Dinos. This means that this 206 GT will likely sell for a lot less than an all-original car.

These early 205 GTs are perhaps the purest and most desirable examples of the car, with their lightweight (and rust free) alloy bodies, and the high-revving 2.0 liter V6s.

The car you see here is a project, it needs either a refurbishment or perhaps a full restoration depending on the wishes of the next owner.

Interestingly this Dino was first owned by playboy, gentleman Le Mans driver, and racing team owner Alain de Cadenet. Later in its life the car was partially refurbished however it was never completed.

It’s now being offered for sale by RM Sotheby’s on the 26th of November in München, Germany with a price guide of $155,000 – $205,000 USD. This is well below the normal value of the 206 GT as this car has a replacement V6, not the numbers-matching original engine. 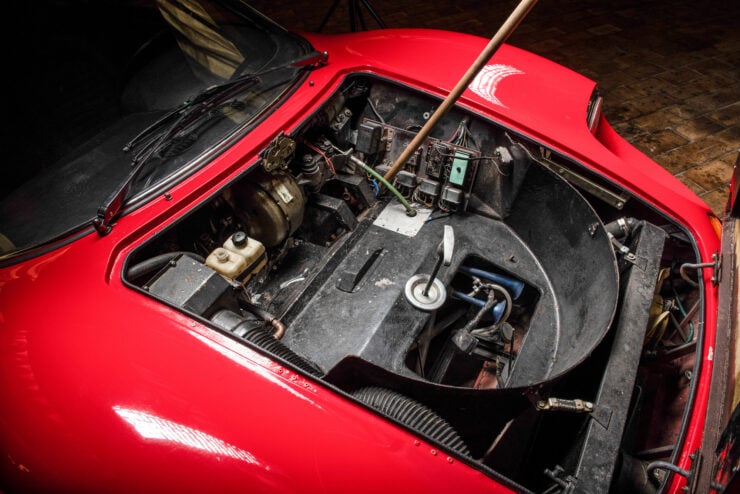 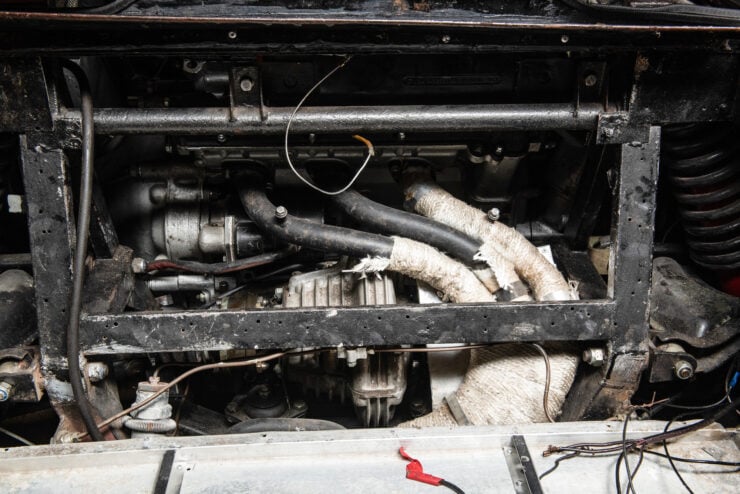 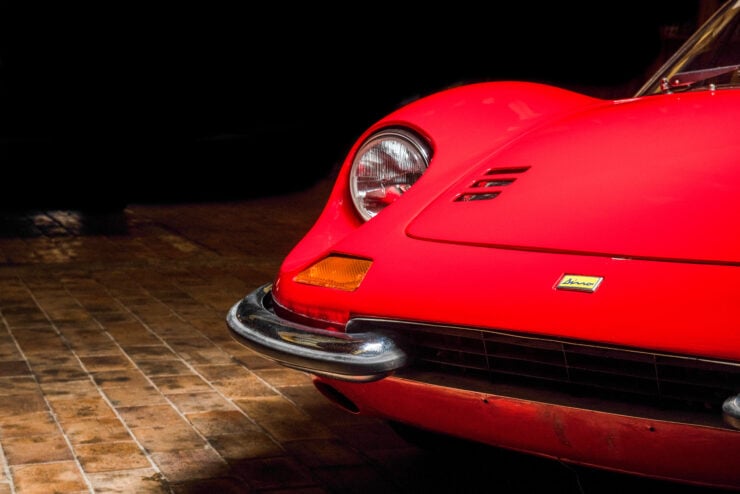 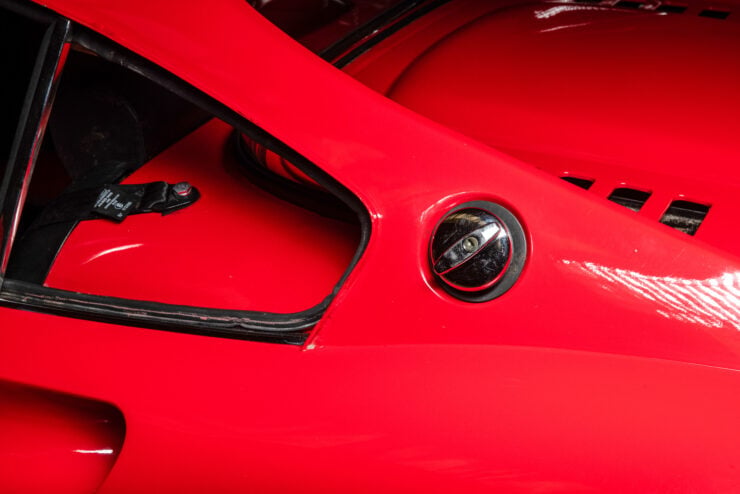 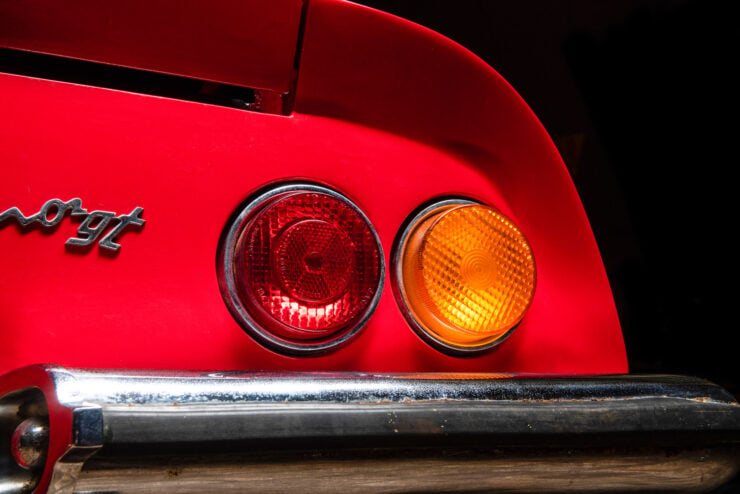 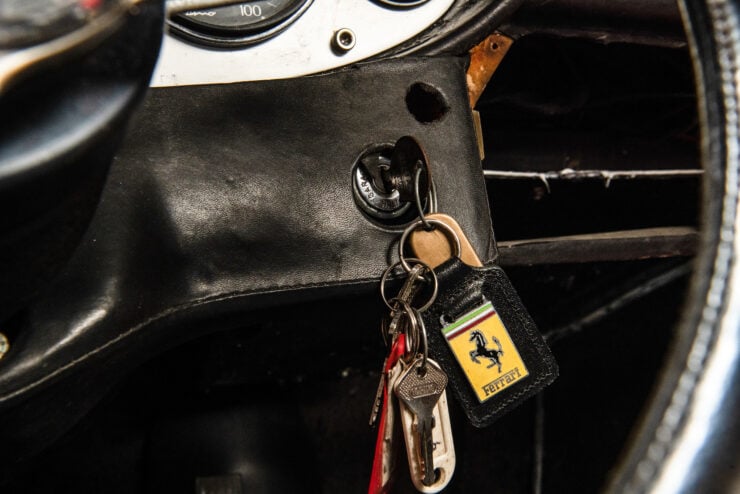 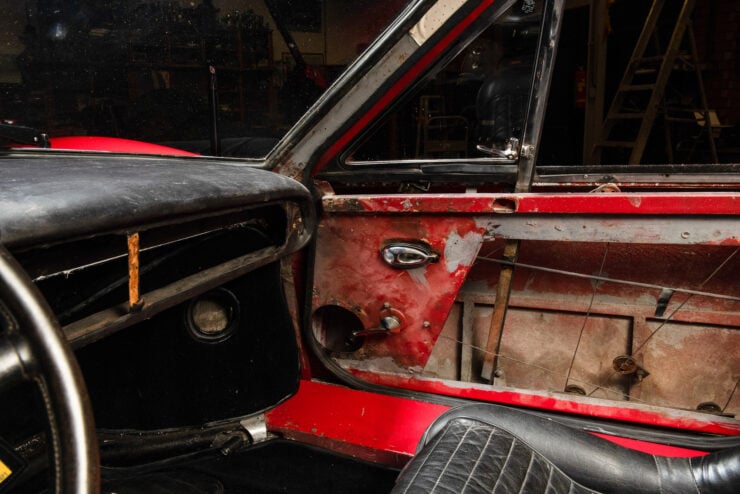 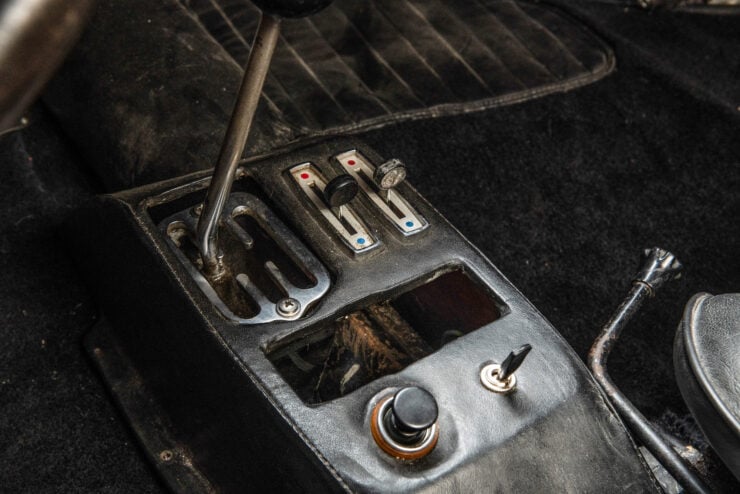 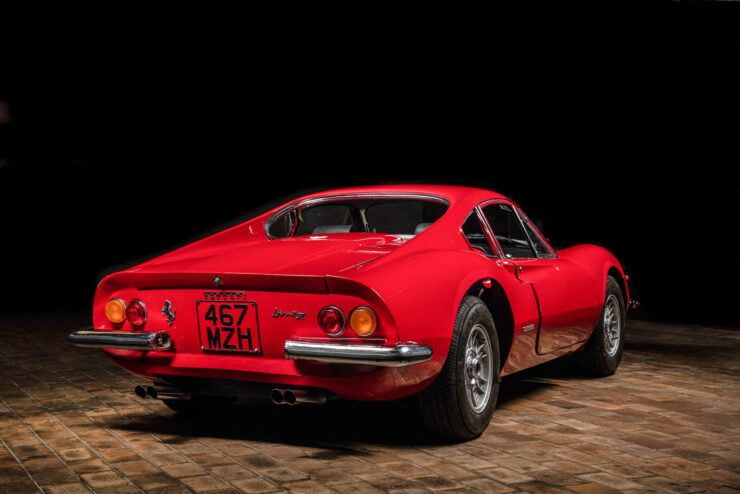 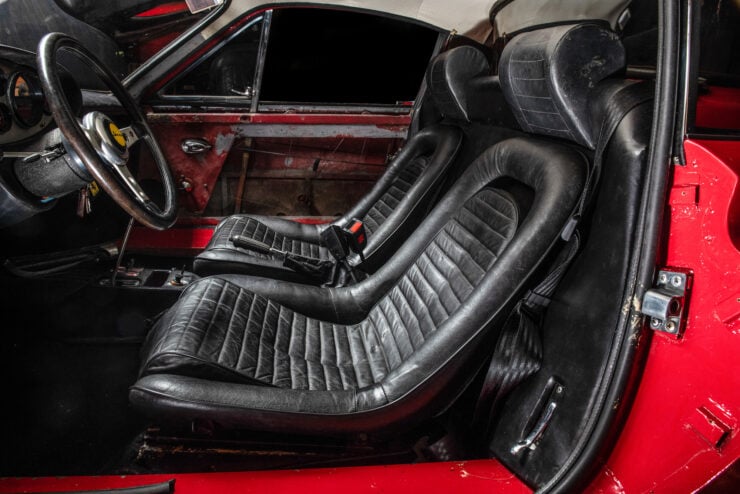 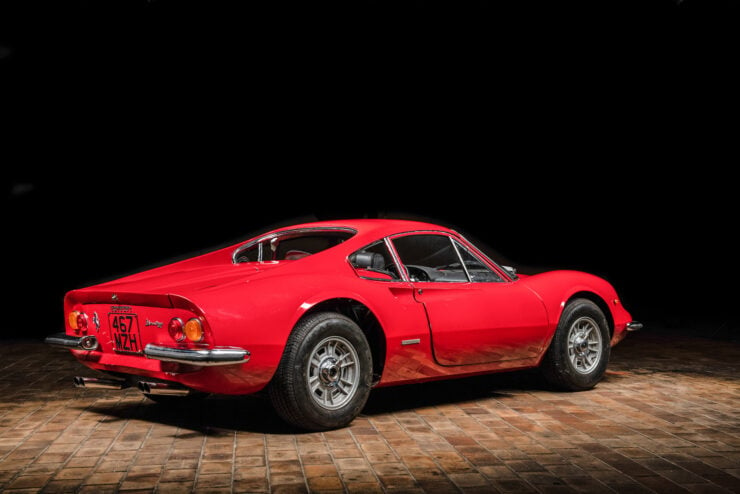 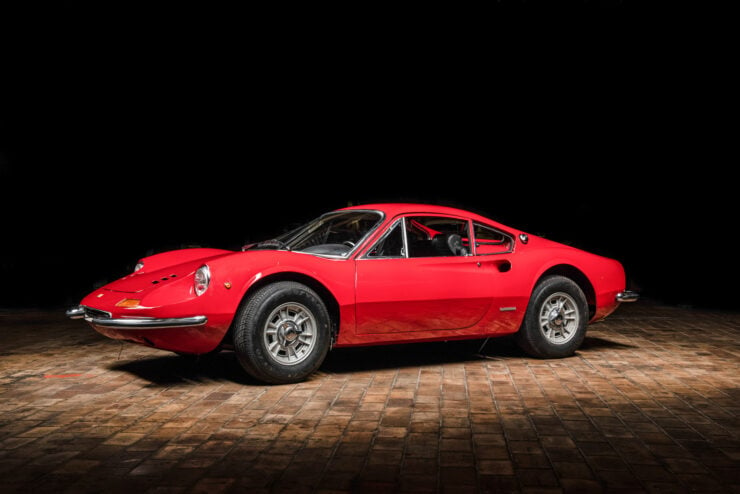