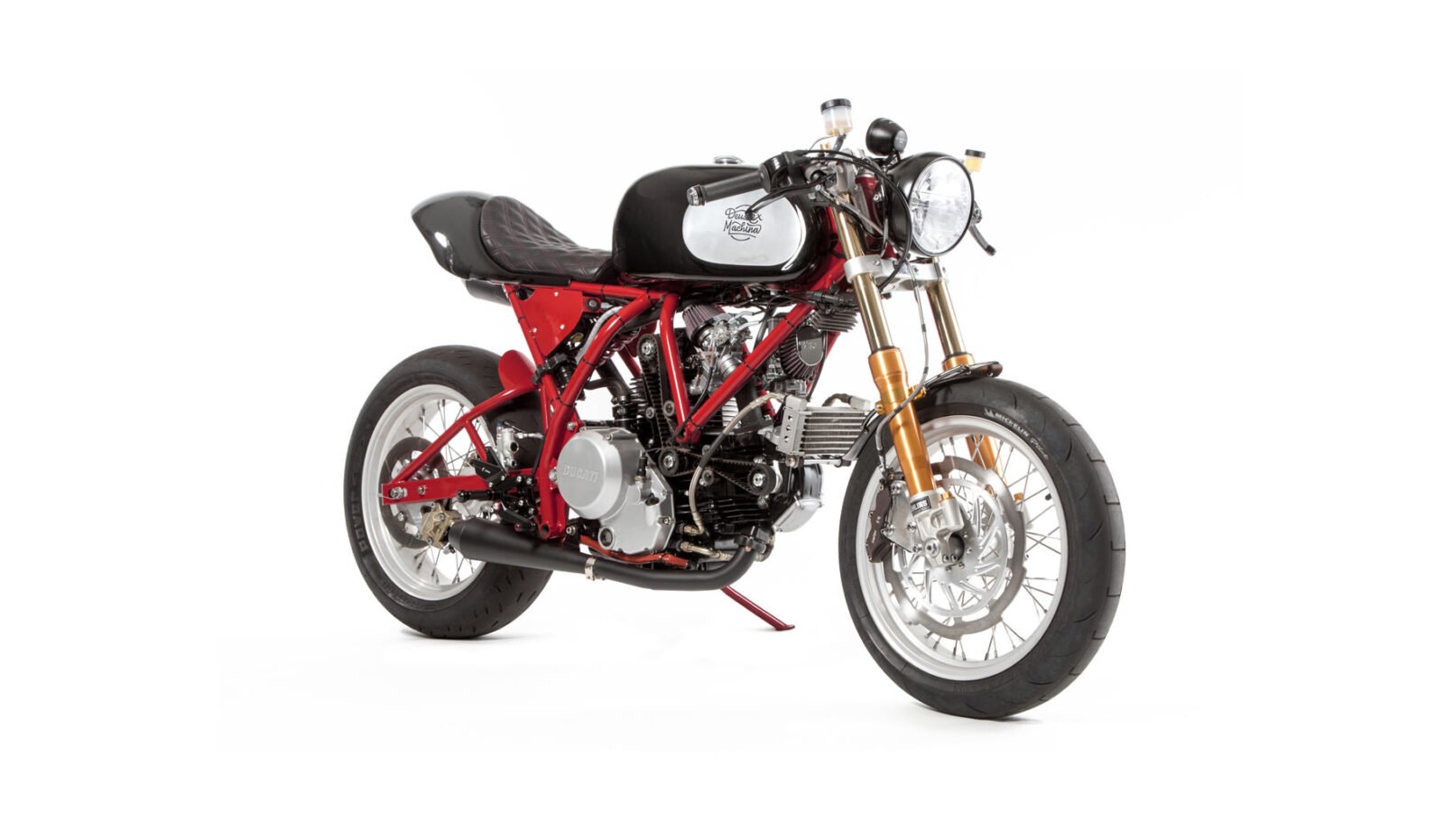 The Ducati Monster is a motorcycle we’ve seen customised six ways from Sunday, so whenever we find one that looks genuinely unique, it always grabs our interest.

Dubbed “The Dreamliner”, this Ducati is the work of Michael Woolaway – he’s the Design Director at Deus Ex Machina’s American garage and a former professional motorcycle racer. Over the past few years, Woolie (as he’s affectionately known) has built customs for Orlando Bloom, Ryan Reynolds, Billy Joel, and Bruce Springsteen – not to mention a slew of others who are a little less famous.

One of the signatures of Woolie’s work is fastidious attention to detail, he’s also well-known for building custom motorcycles that handle exceedingly well – largely thanks to his years of racing professionally and learning the fundamentals the hard way.

This Monster is Woolie’s latest creation, he did away with the bike’s original Trellis frame in favour of a lighter chromium-molybdenum structure that uses the same mounting points as the factory chassis – allowing the engine to be used as a stressed member.

The 750cc L-twin has been paired with a set of Cone Engineering pipes and the fuel-air mix is provided by a pair of Keihin FCR racing carburettors with K&N air filters. A pair of matching Michelin Pilot tires sit on spoked rims with full-floating rotors by Kosman Specialties and Brembo brakes are fitted front and back. Suspension is provided by re-valved Öhlins forks (by Ed Sorbo at Lindemann Engineering) and adjusted to fit the owner’s specific weight, the rear mono-shock was built by Jim Wood at RaceTech.

That beautiful tank, fender, and seat cowl are each handmade from aluminium and saddled with a waterproof Kushitani leather upholstered seat.

Woolie says that the geometry of this bike is similar to the Ducati 916RS with 24% head angle, 56″ wheel base, and fully adjustable swing arm angles resulting in tight handing and assertive responsiveness to input. Interestingly, this is also the first ground-up Deus Custom from Woolie’s Workshop to use an Italian engine.

If you’d like to see more from Michael “Woolie” Woolaway you can click here to visit Deus Ex Machina. 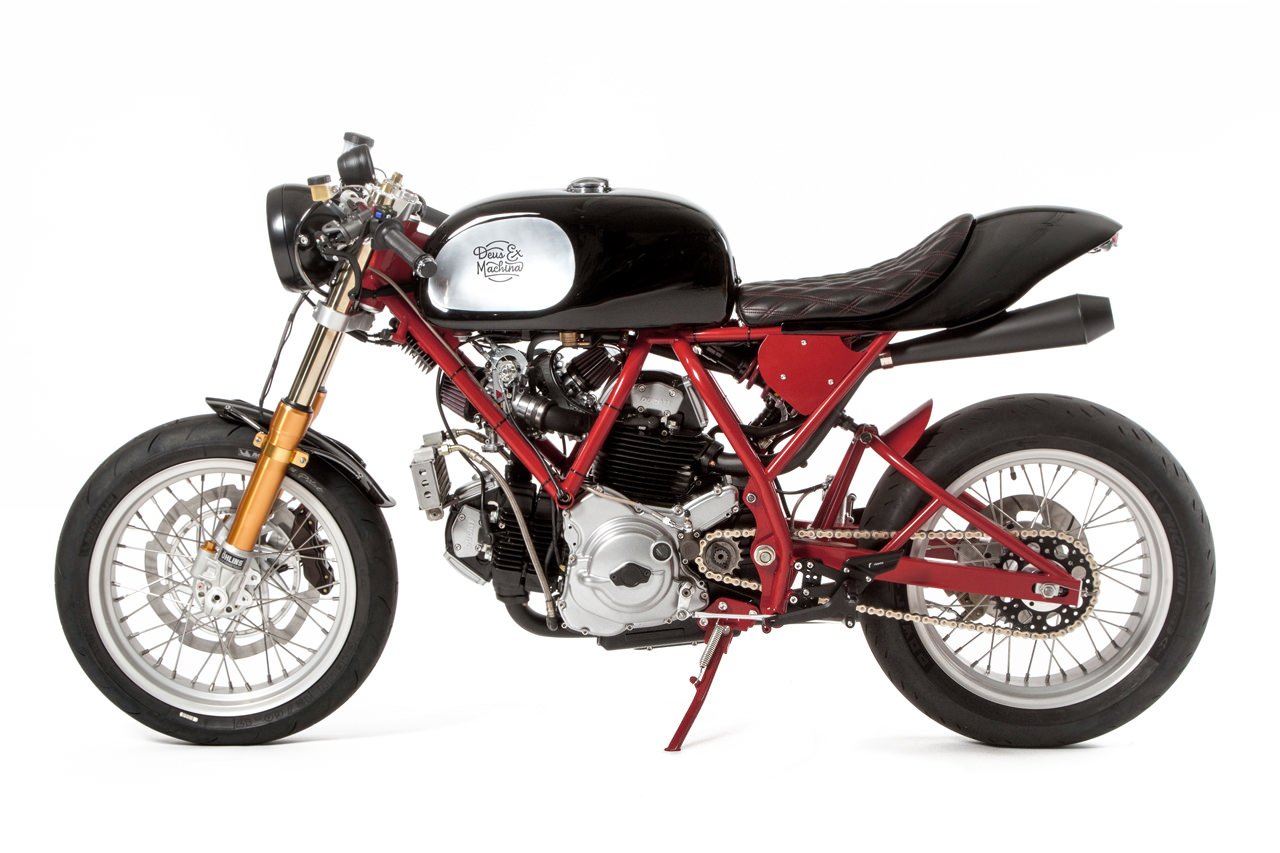 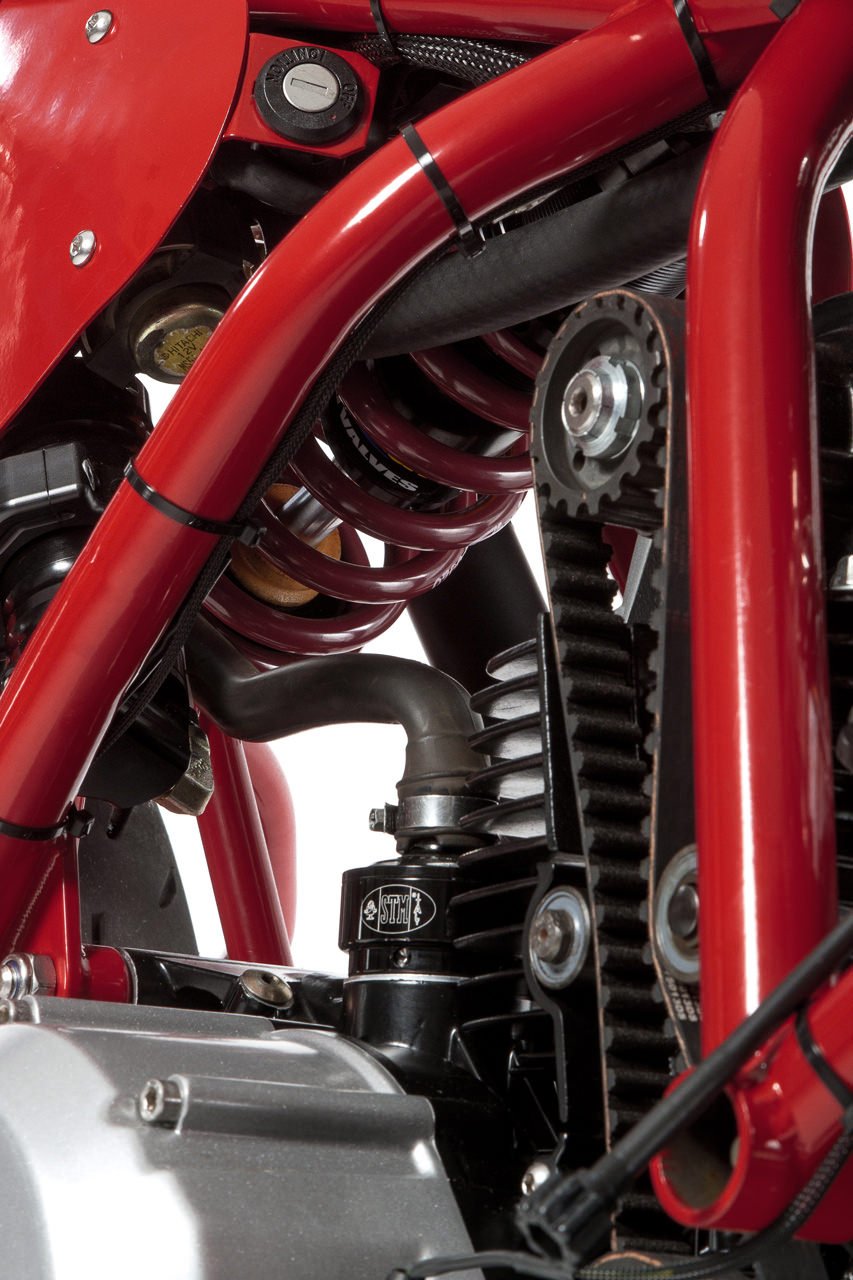 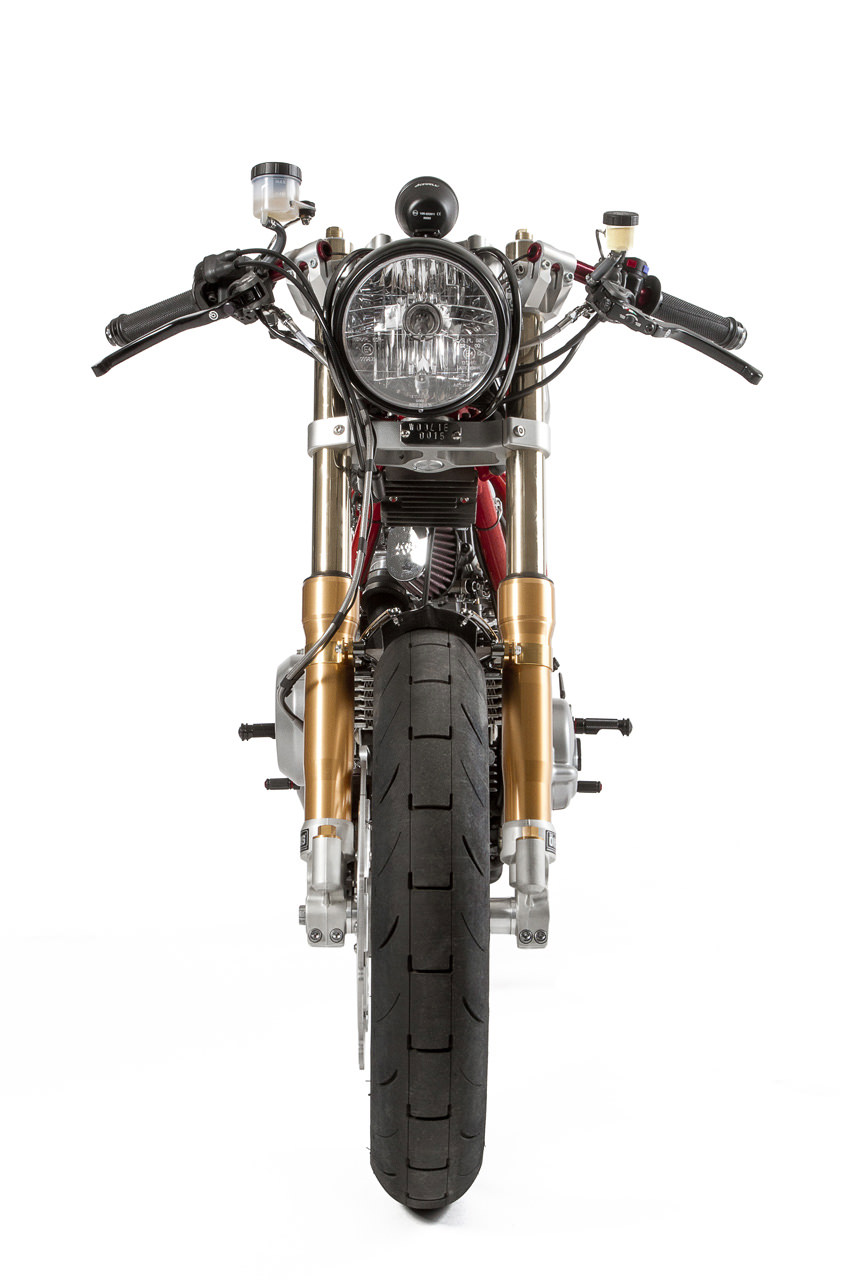 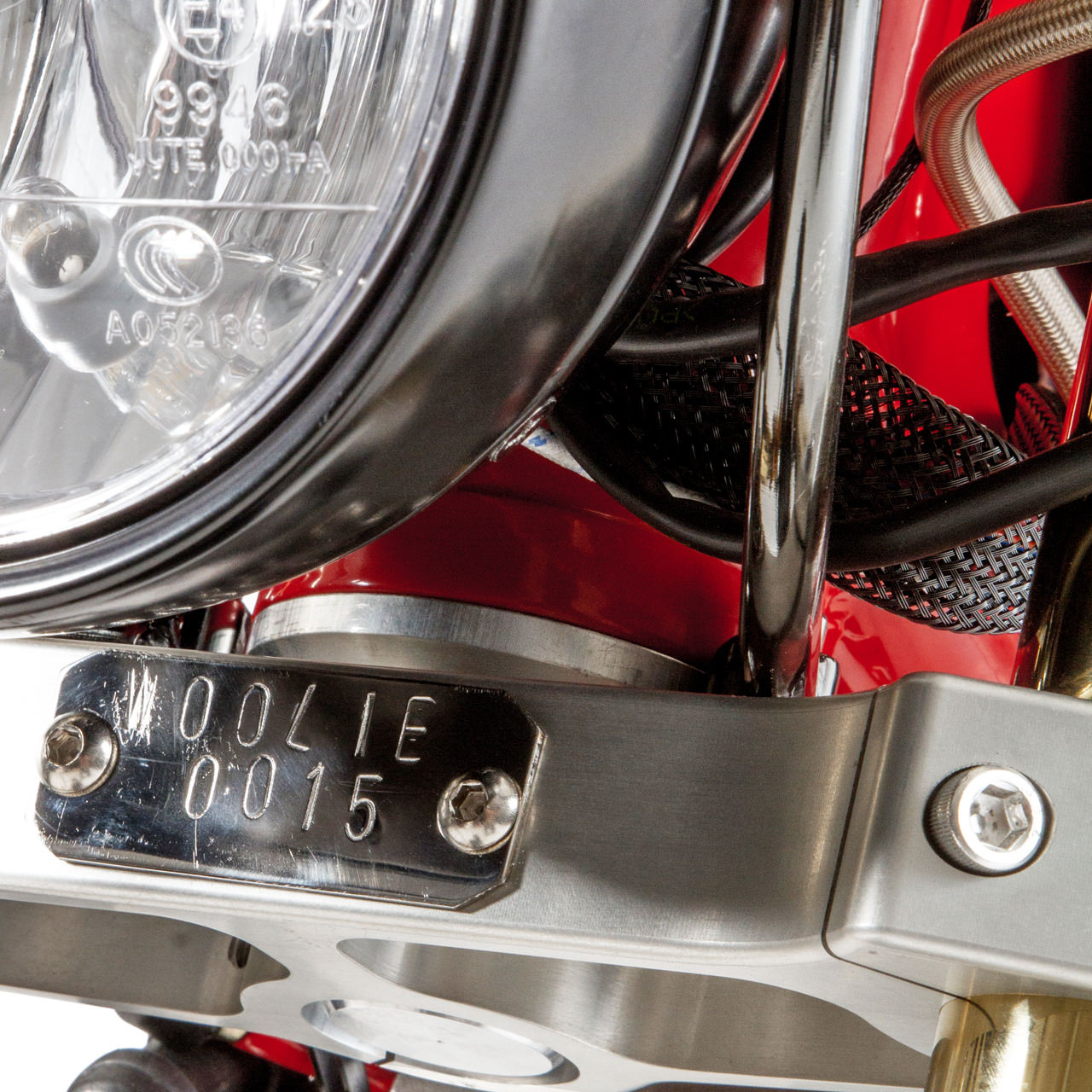 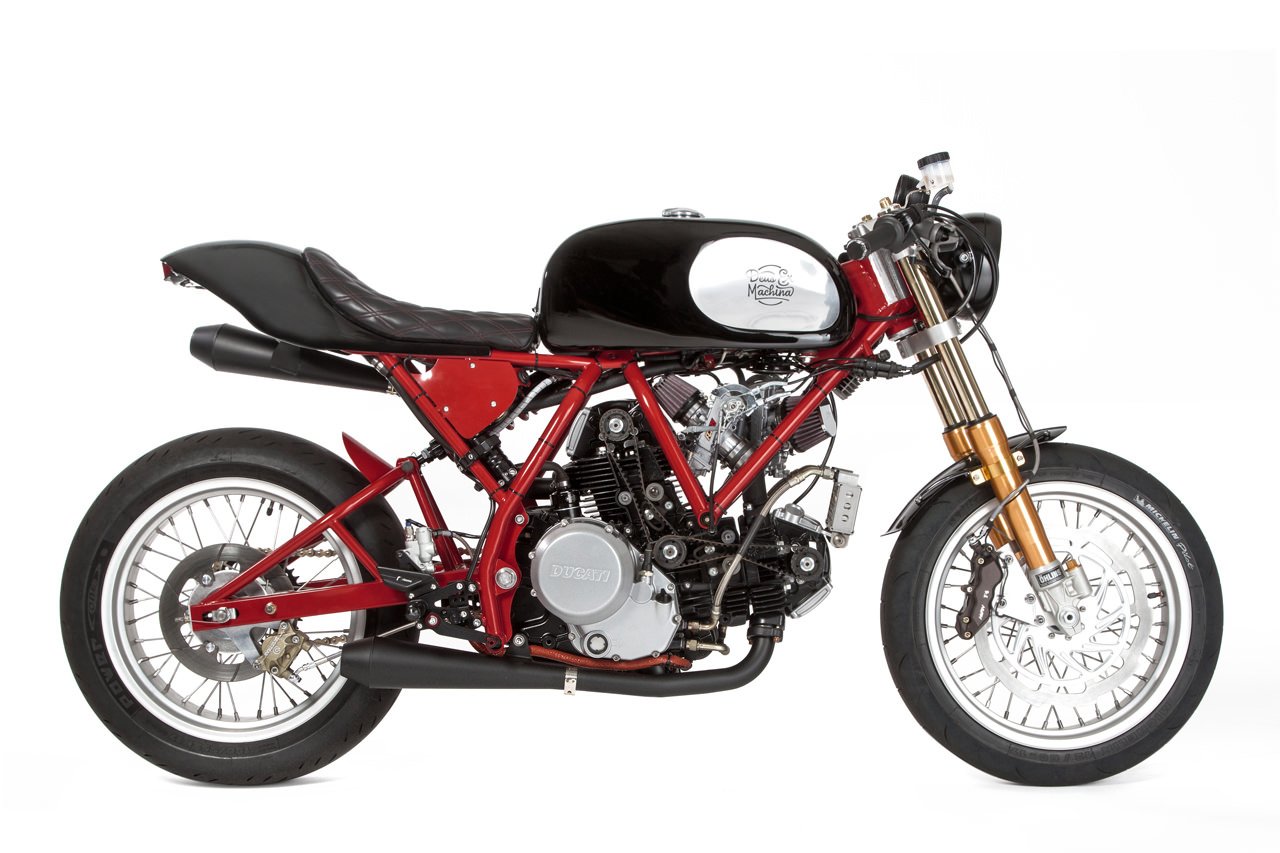 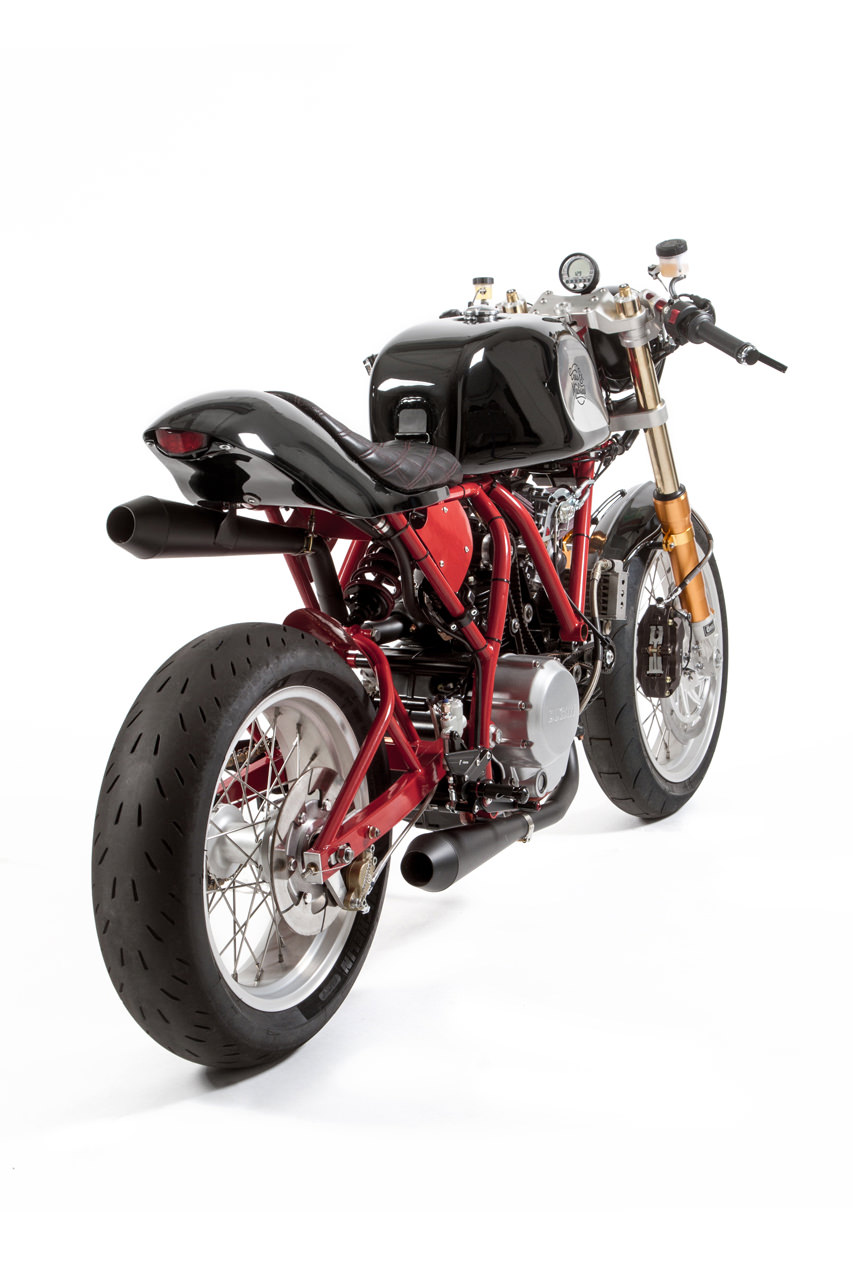 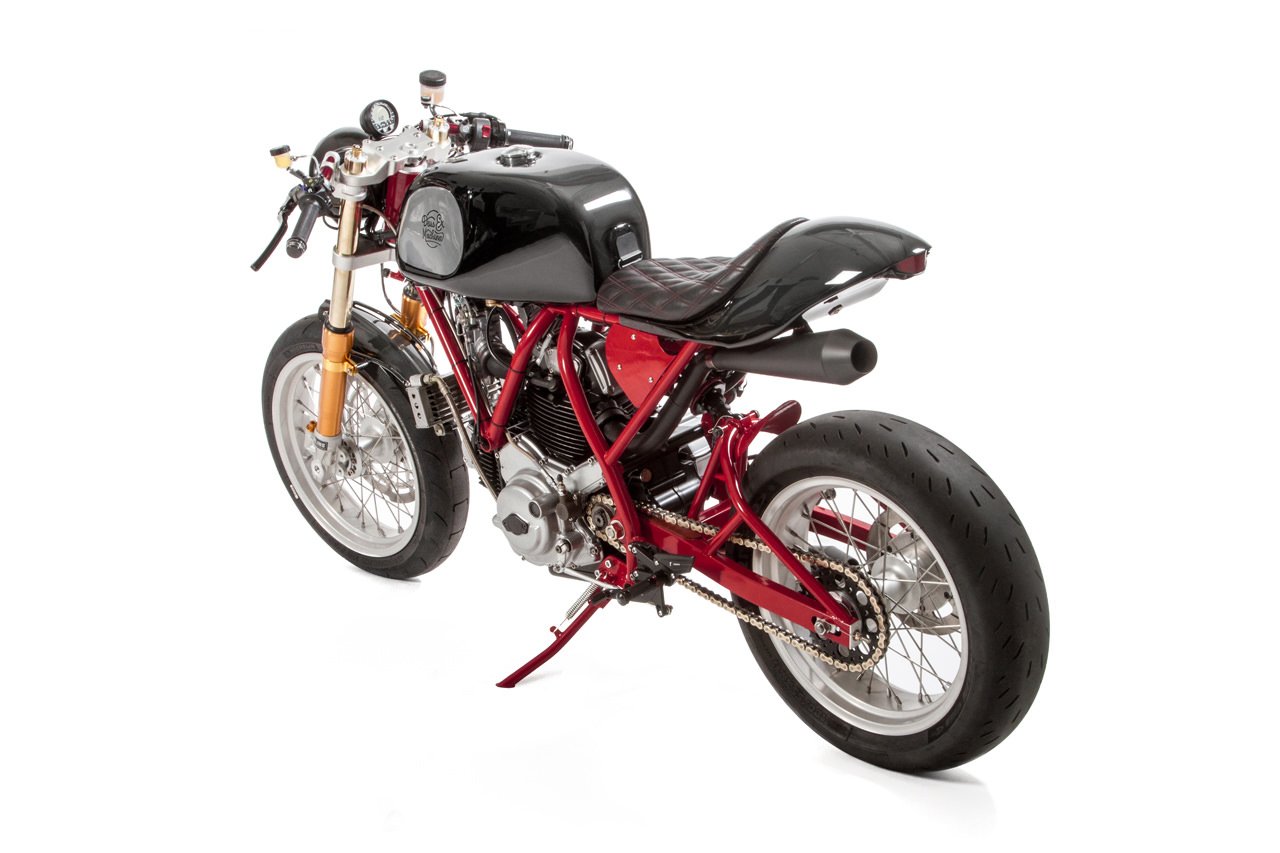 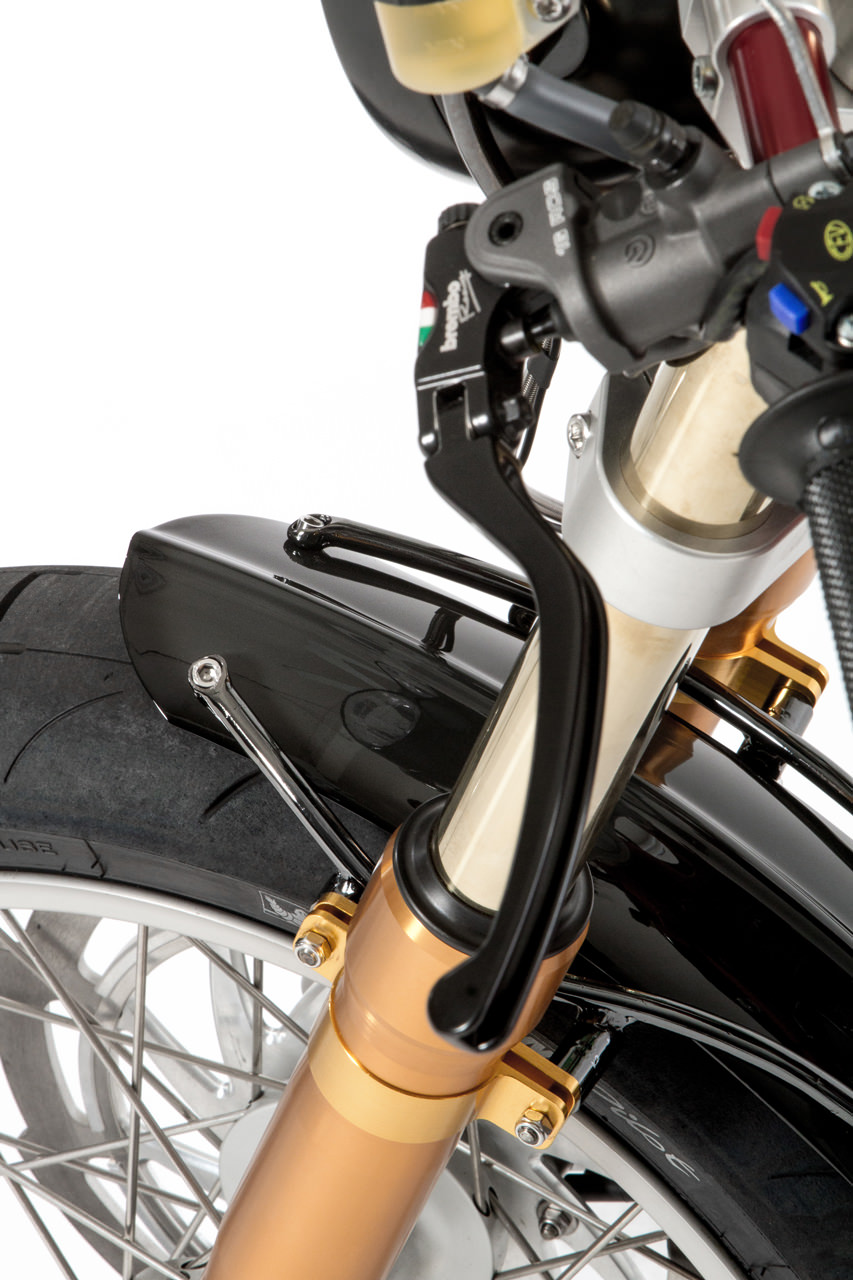 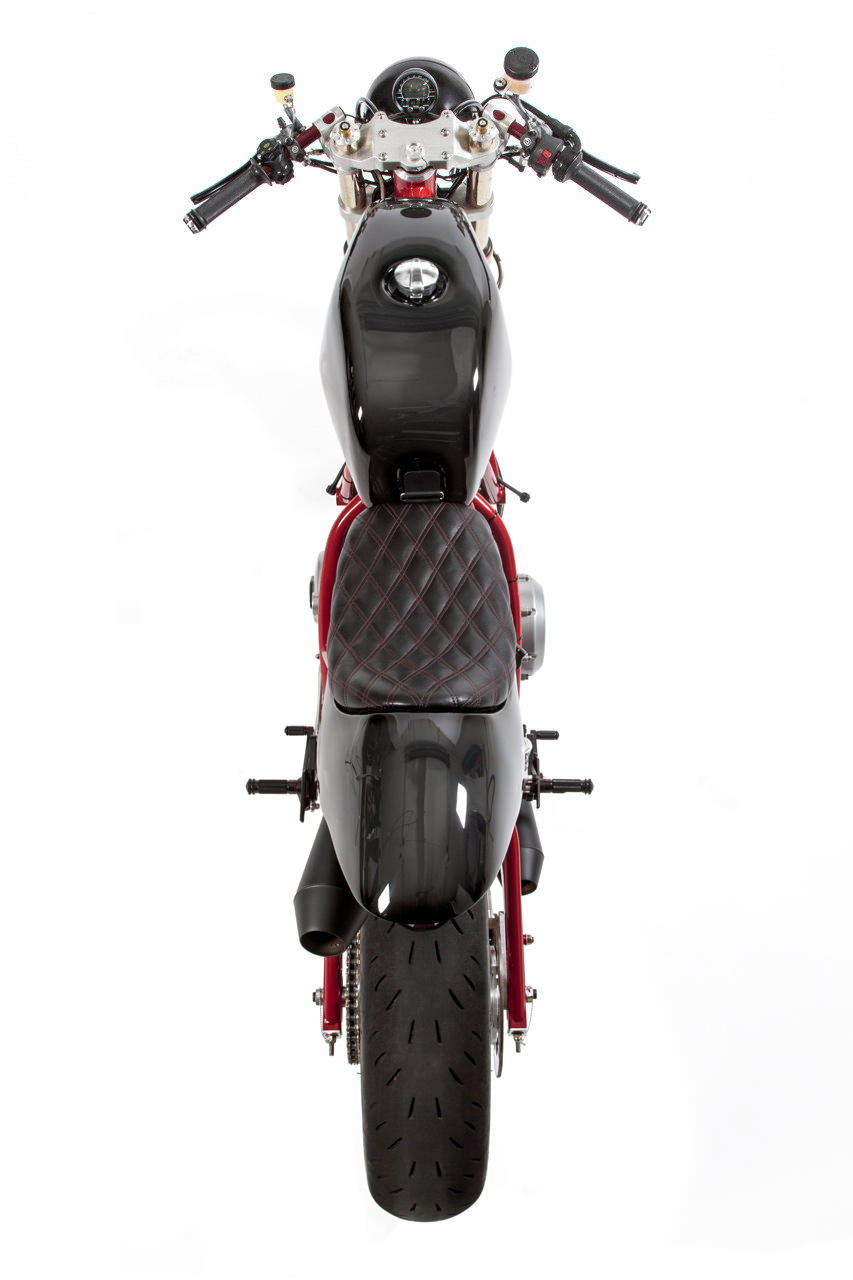 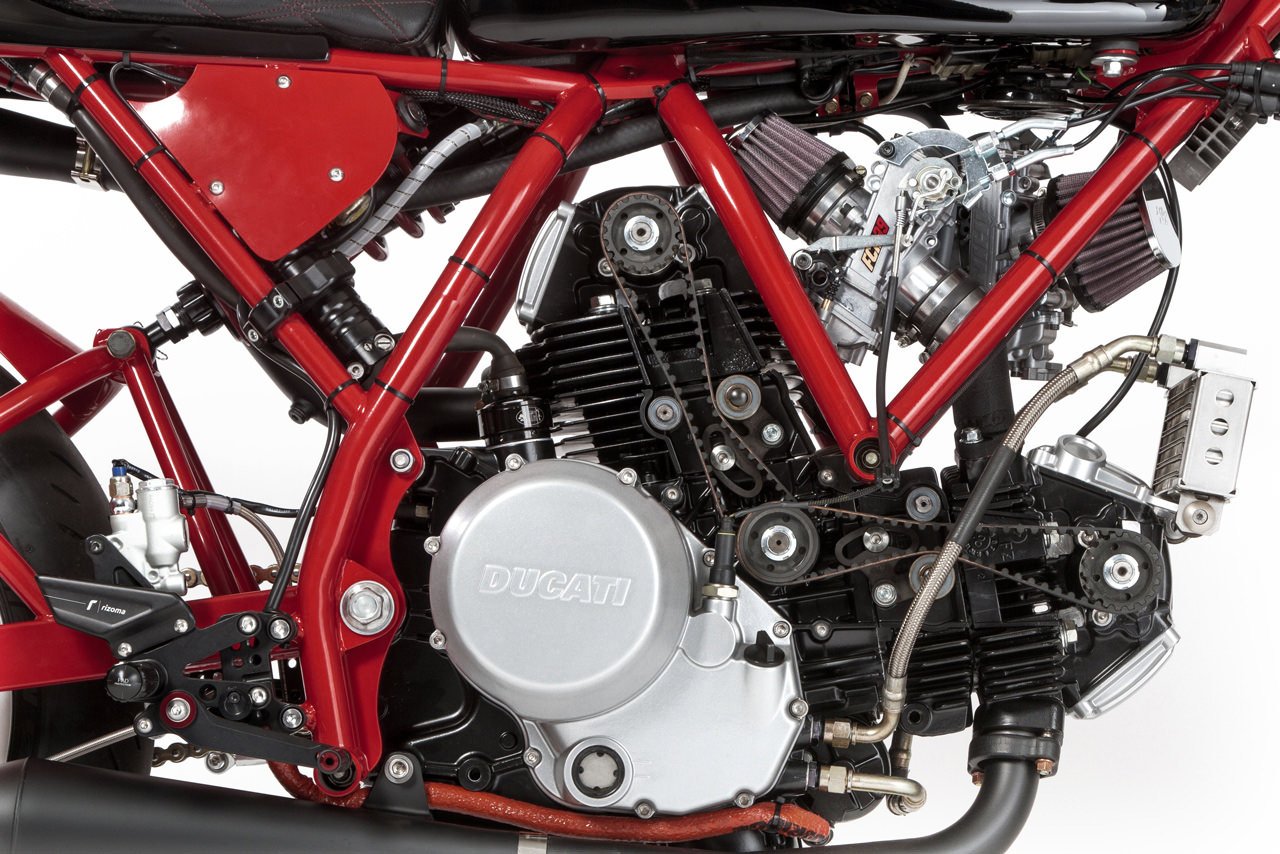 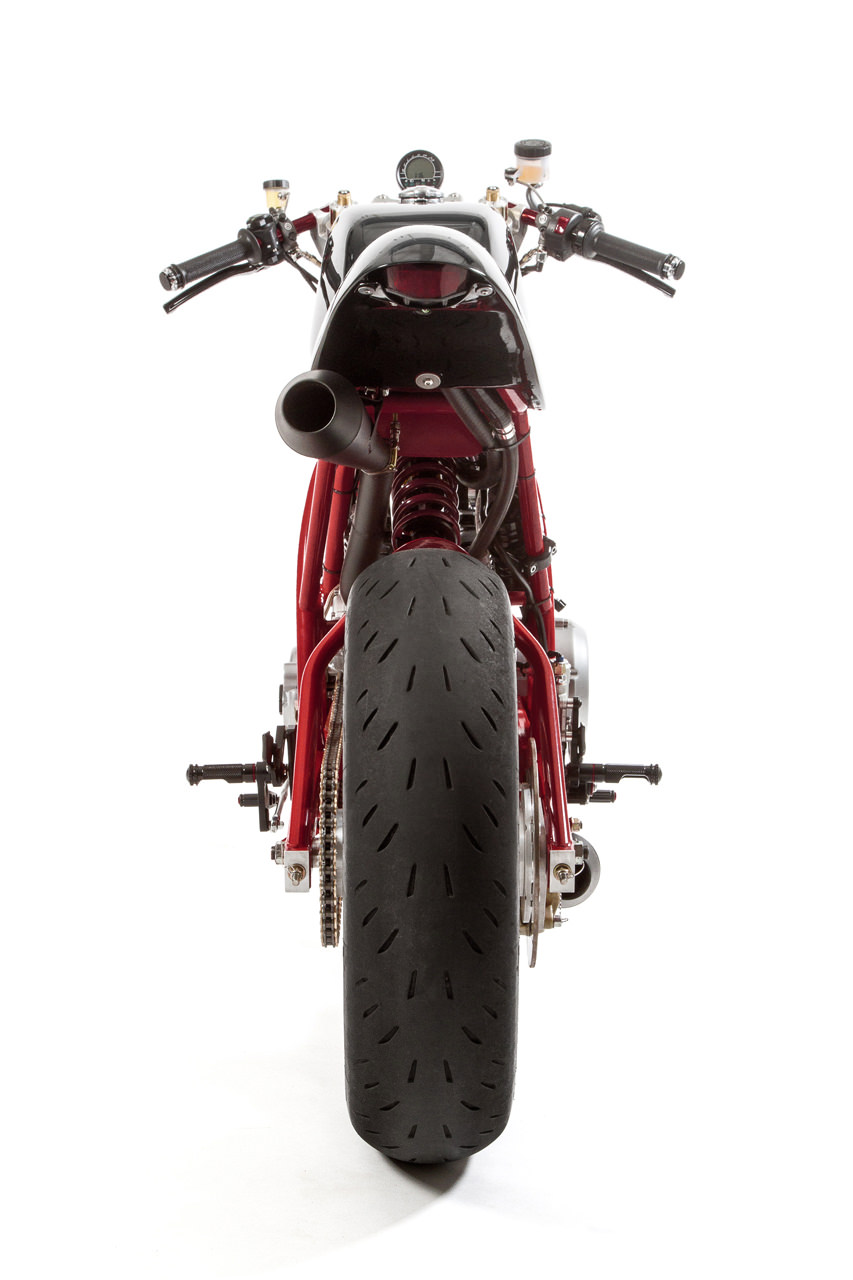 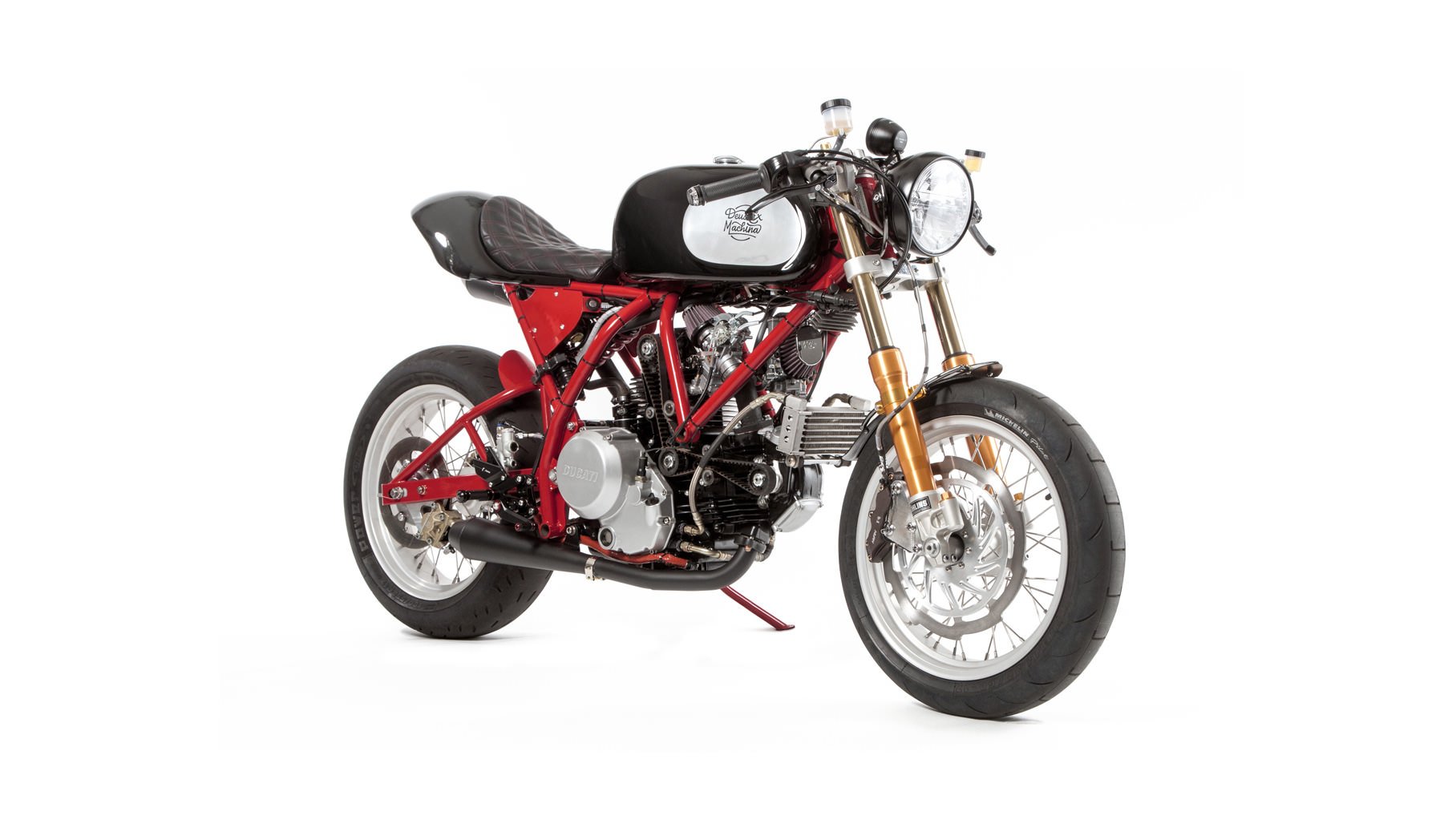