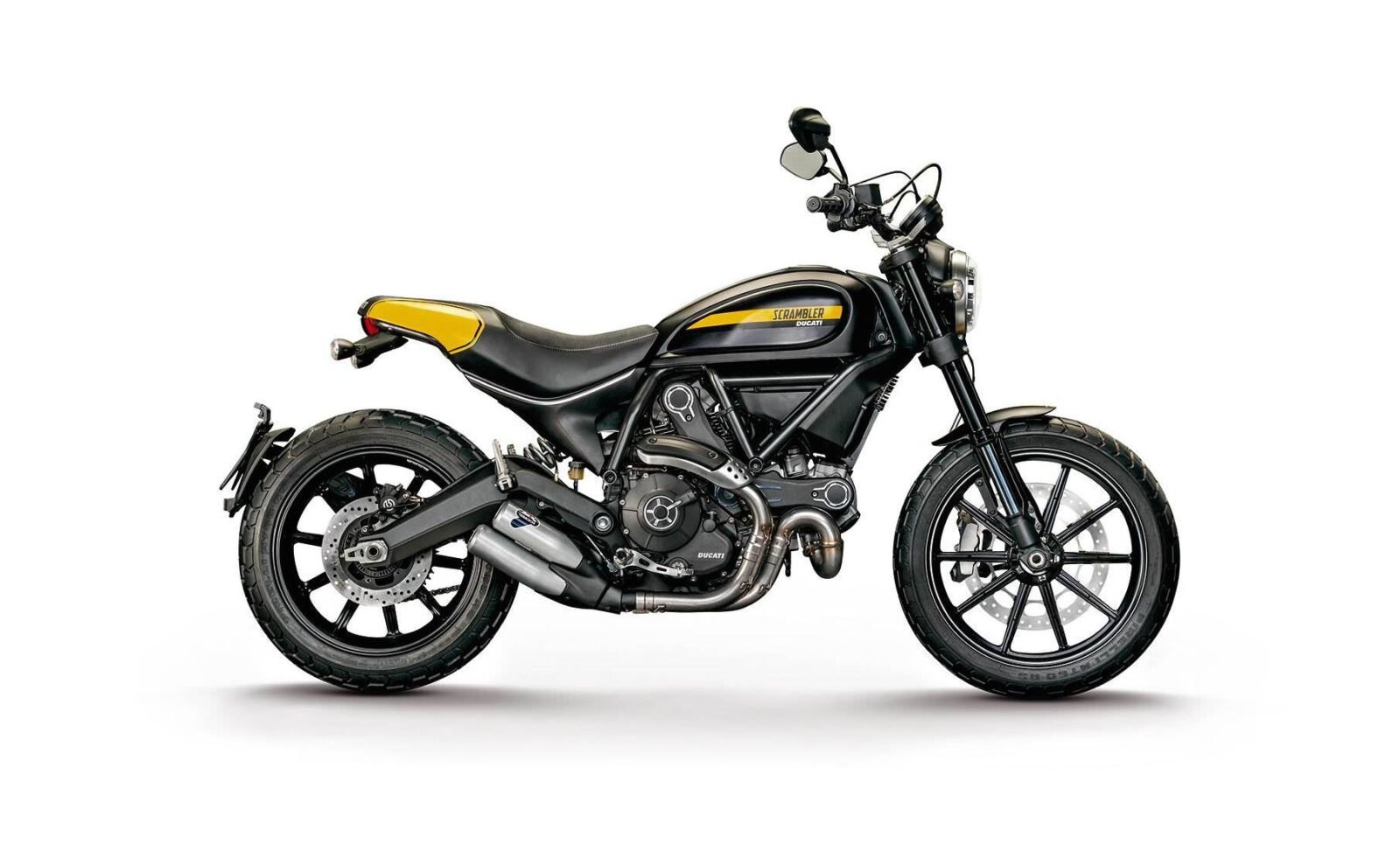 The long rumoured Ducati Scrambler was unveiled by the Italian motorcycle manufacturer at INTERMOT in Germany yesterday, this is a bike we’ve been hearing about for years although as it turns out – none of the rumours were particularly accurate. The most persistent Ducati Scrambler rumour was that it was going to be a slightly modified version of the ubiquitous Ducati Monster – with high-exit exhausts, flat tracker handlebars and a racing number glued to the side.

What Ducati have done is create an entirely new motorcycle specifically designed to work both on and off-road, they’ve invested a lot of time and effort into this bike and it’s clear even this early on that they see it as being a significant source of both revenue and new-Ducatistas. Before we go too much further, I’ll get the Scrambler’s specifications out of the way:

The design of the new Scrambler has a close resemblance to the new generation of customs we’ve seen become popular over the past 5 or so years, in fact if you removed the aluminium plate on the side of the fuel tank and put a Deus Ex Machina logo there no one would bat an eye. The bike is relatively lightweight will make it far more useable for light to moderate off-road riding and the fact that the engine is derived from the 800cc Ducati Monster unit should mean that it shares its exemplary reliability punchy power delivery.

Further evidence that Ducati see the Scrambler as being a major new model line is that they’ve released 4 sub-models right off the bat, although each share all of the same engine/transmission/frame components with the major differences being largely cosmetic. Each of the 4 Scrambler models is listed below with its name and unique characteristics listed underneath for the sake of simplicity. 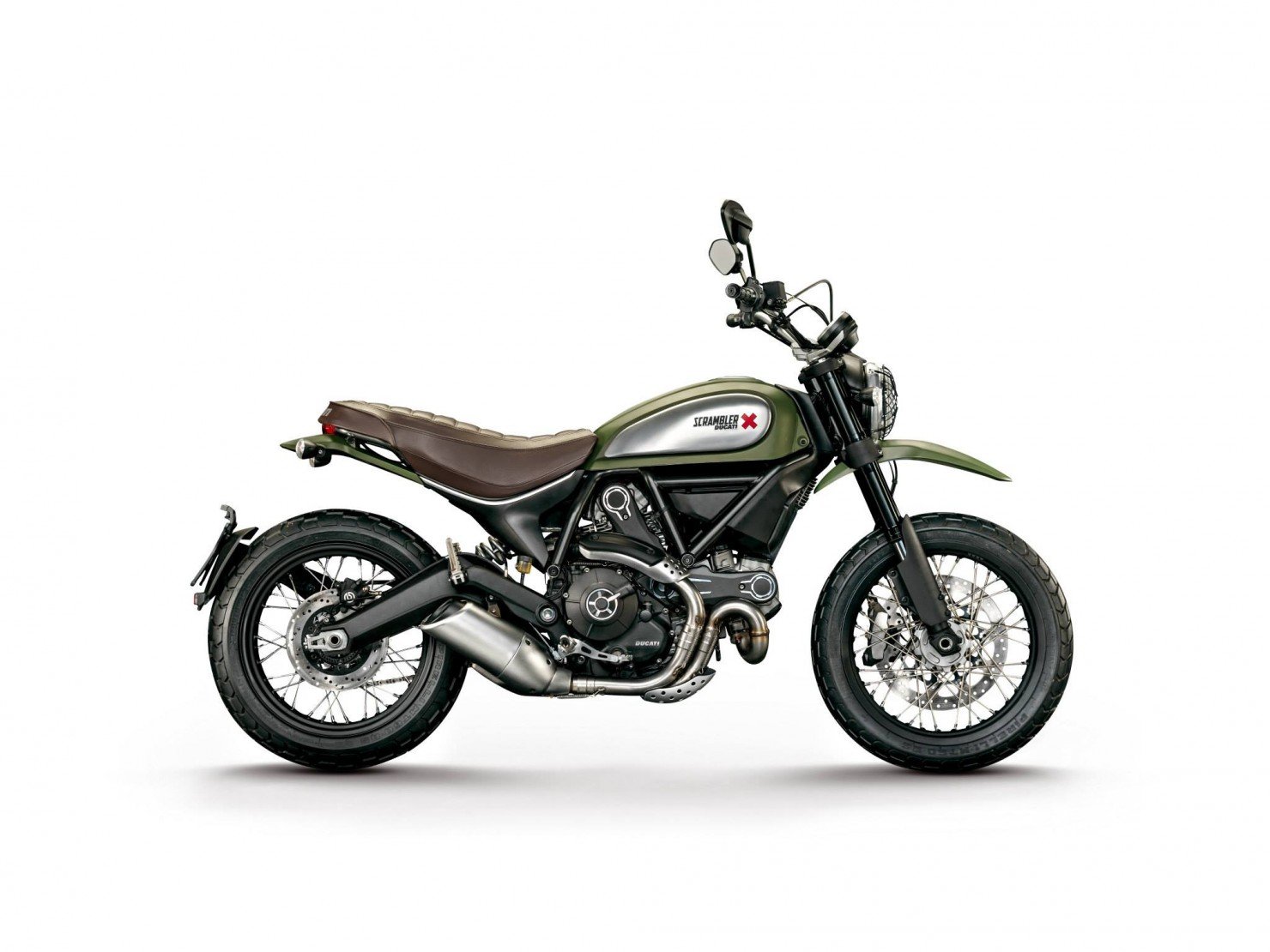 This is likely to be the most off-road capable of the new Scramblers, it’s fitted with a higher front mud guard, a headlight grill, an enduro-style set of handlebars, spoked wheels, a pair of fork protectors and a sump guard fitted beneath the engine. The colour palette has a strong military feel to it and this is likely to be the strongest competition for those considering the Triumph Scrambler.
MSRP: $9,995 USD 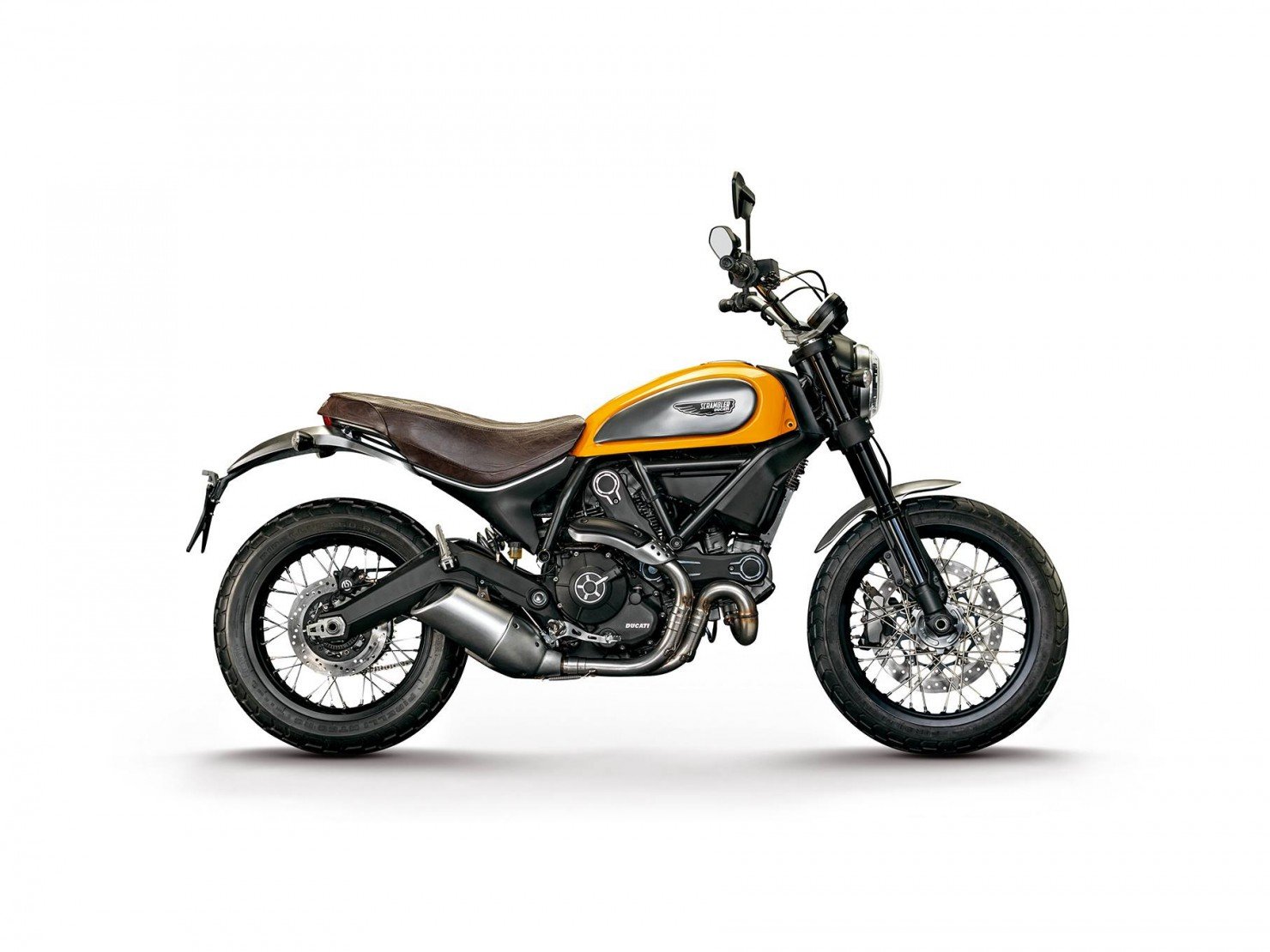 The Classic closely resembles the original Ducati Scramblers from the ’60s and ’70s, the use of a traditional rear mud guard is going to strongly appeal to those who intend to ride in inclement weather.
MSRP: $9,995 USD 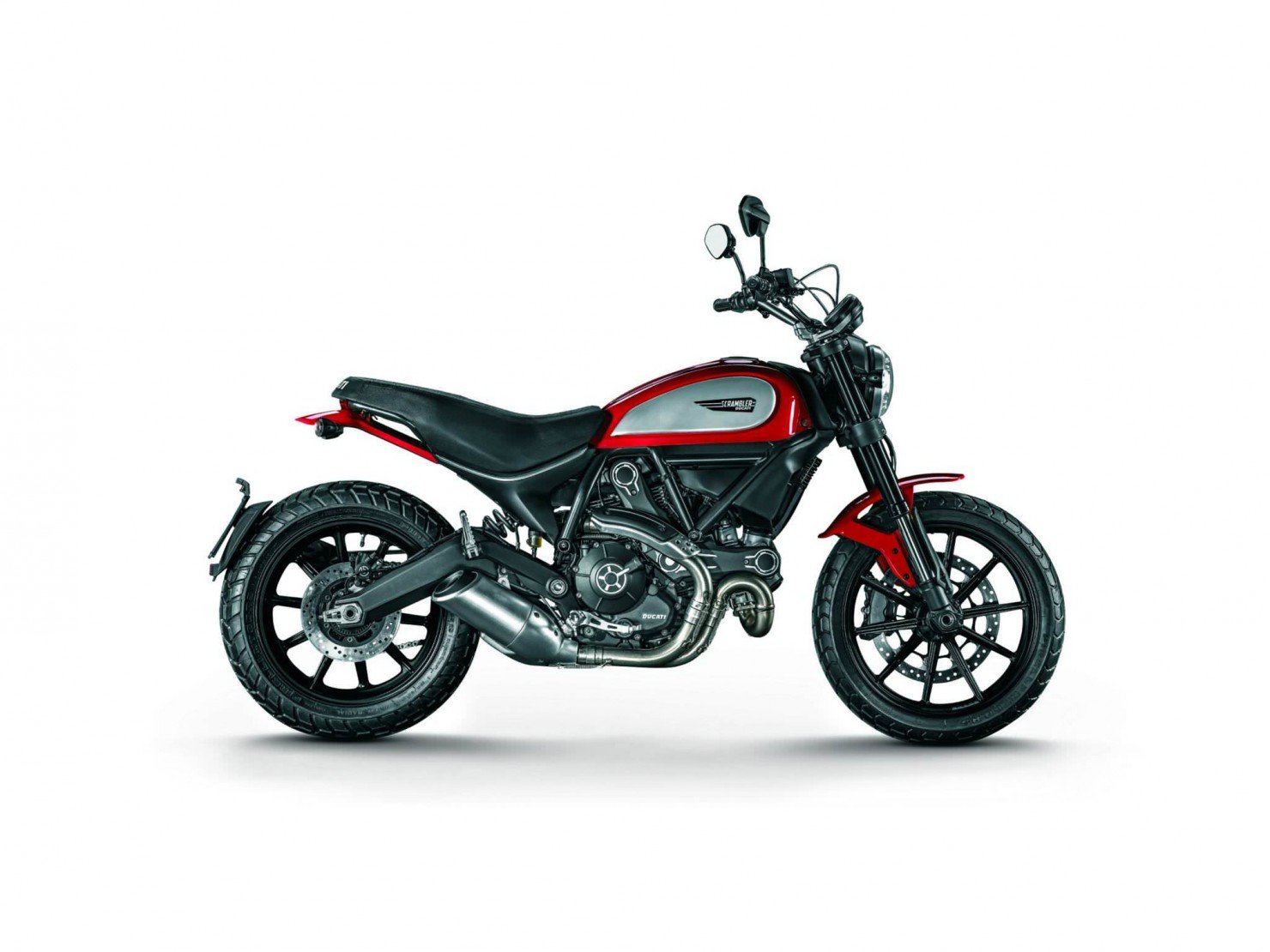 This is the entry level model that’ll be very popular with those seeking to buy a Scrambler in order to pull it apart and customise it. At $1,500 less than the other models it’s likely to be the largest selling model by quite a margin.
MSRP: $8,495 USD 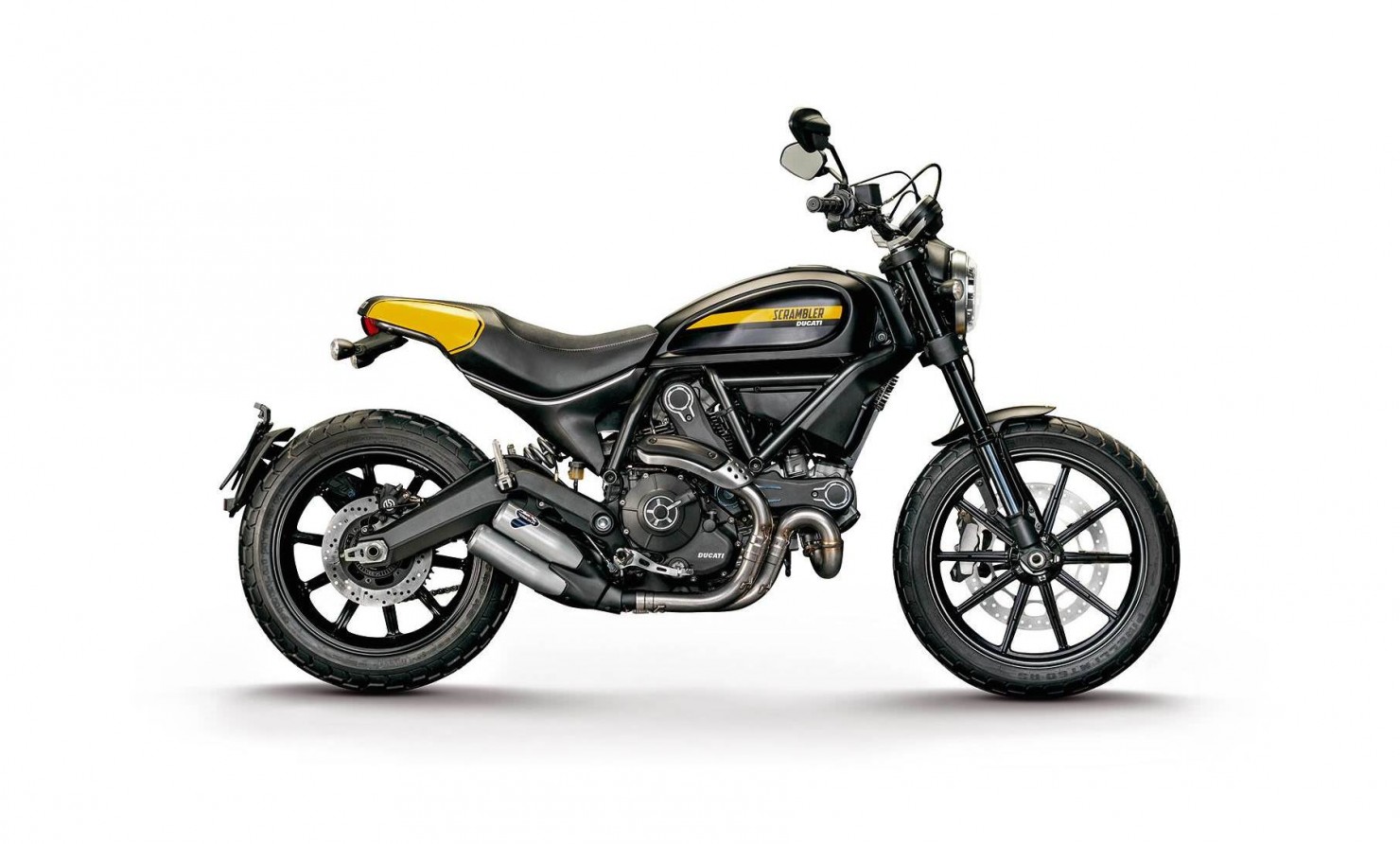 This model is directly inspired by ’70s era American flat track racing motorcycles, it has a more sport-oriented seat, a Termignoni slip-on silencer and low aluminium handlebars – this is the one I’d take home personally, but I’m a sucker for anything even vaguely related to flat track racing.
MSRP: $9,995 USD

The strongest competition for the new Ducatis is going to be the tried and tested Triumph Scrambler, so you can expect the magazines to start running side by side comparisons just as soon as they can get their hands on the new Italian bike.

It’ll be interesting to see if the long rumoured Moto Guzzi Scrambler comes to light any time soon – there have also been mumblings of both Honda and Yamaha Scramblers being in the final stages of development, meaning that the mid-2010s are looking more and more like a renaissance for the humble mud-flinging scrambler. 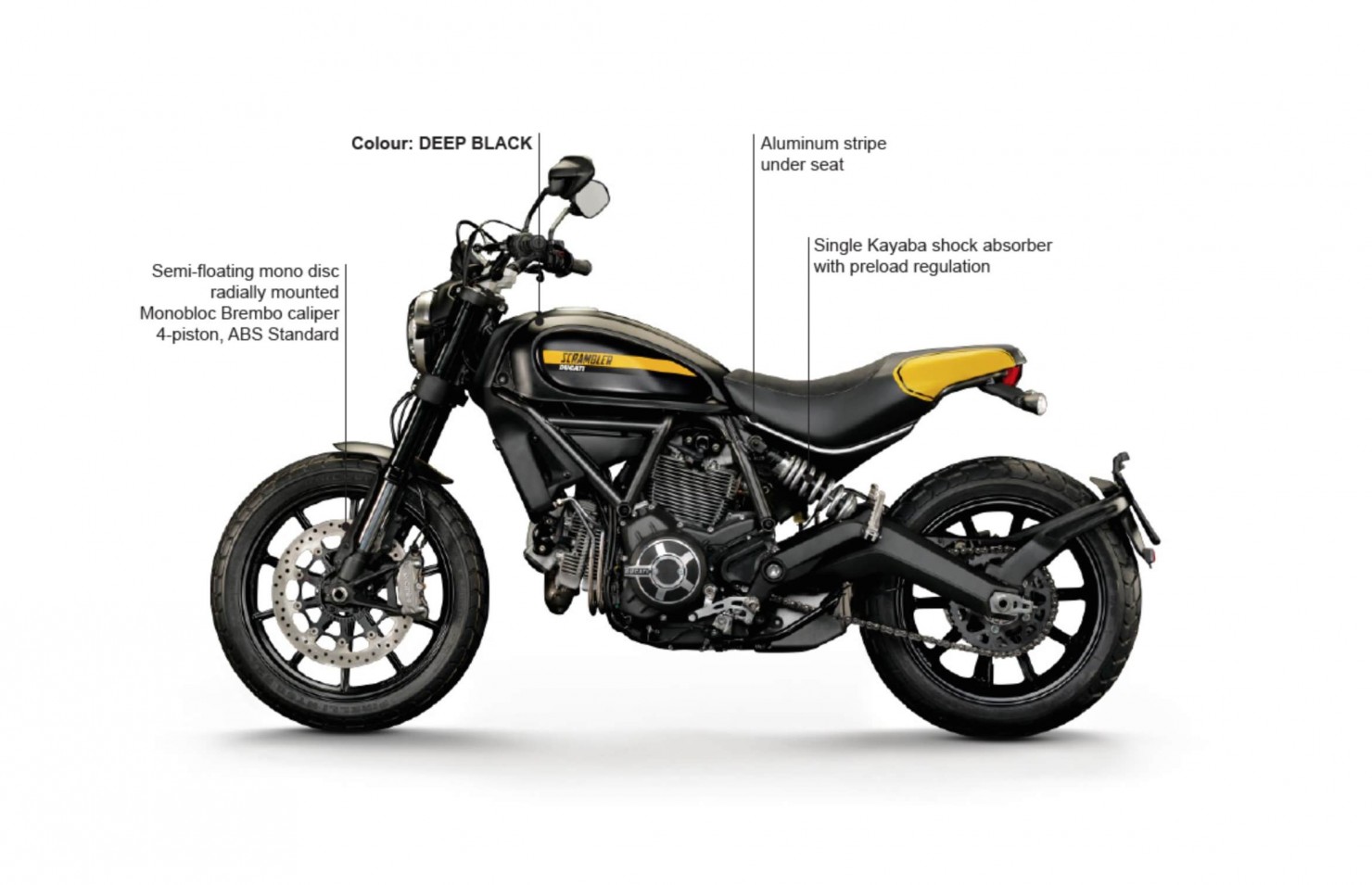 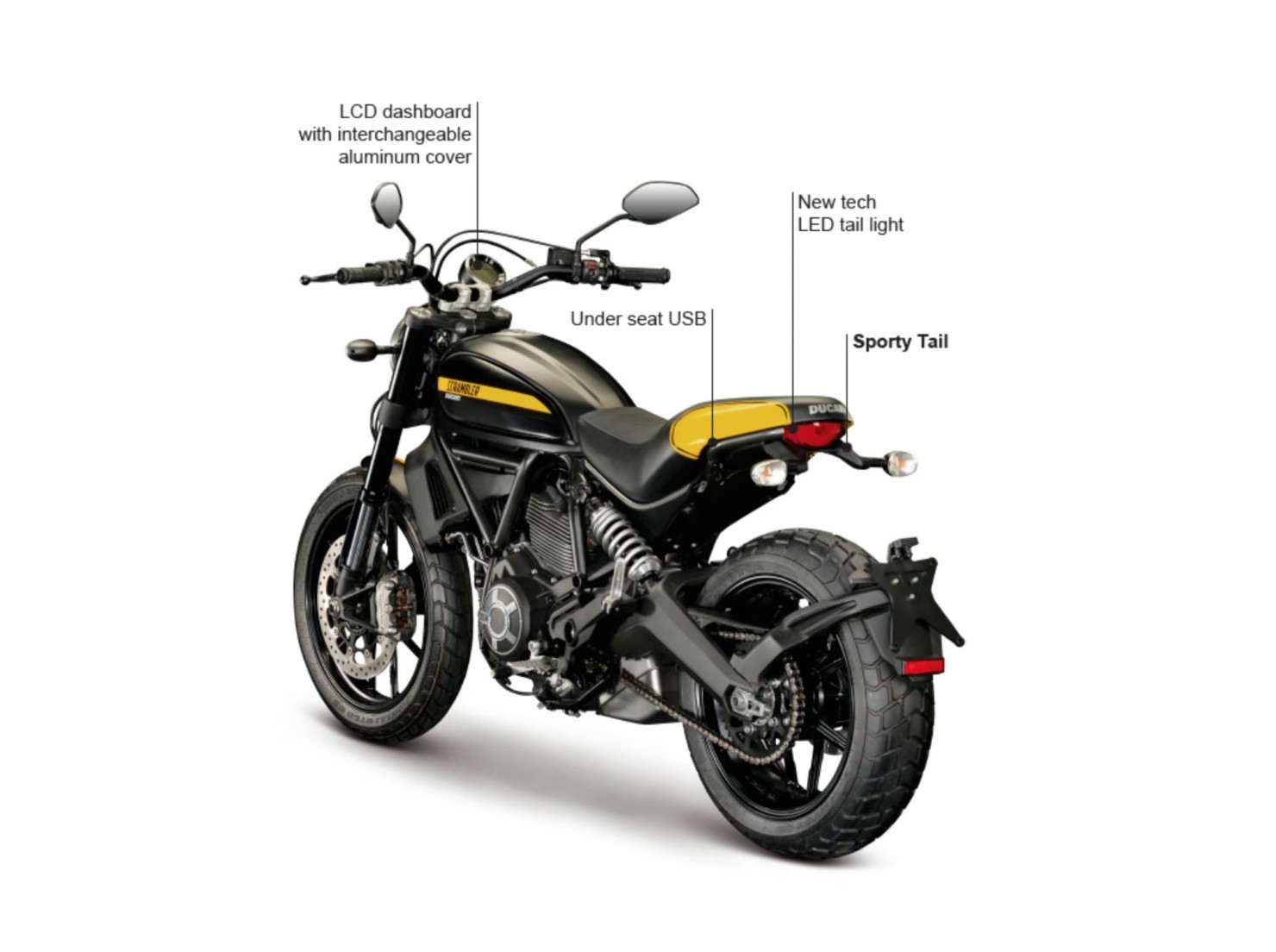 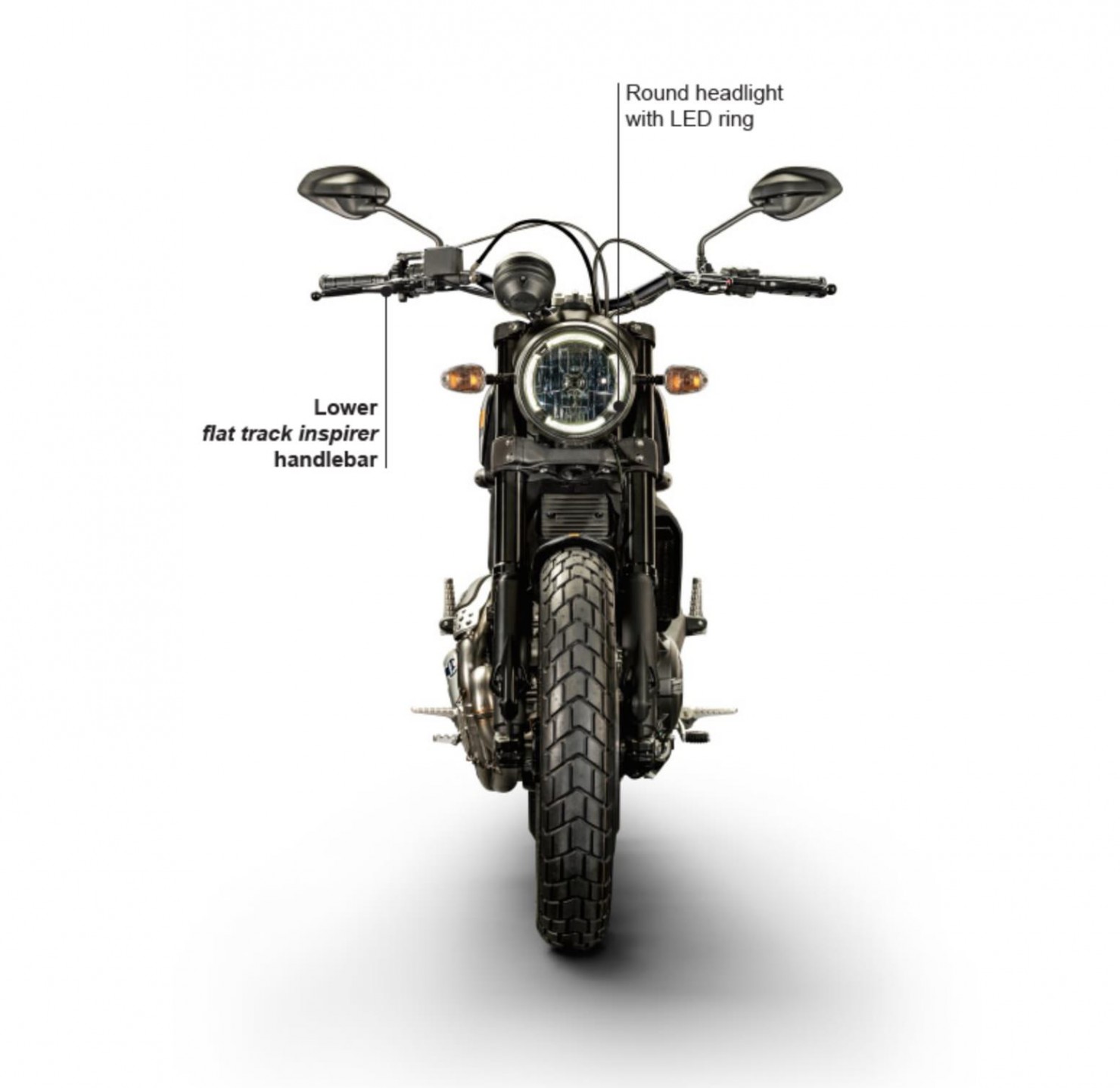 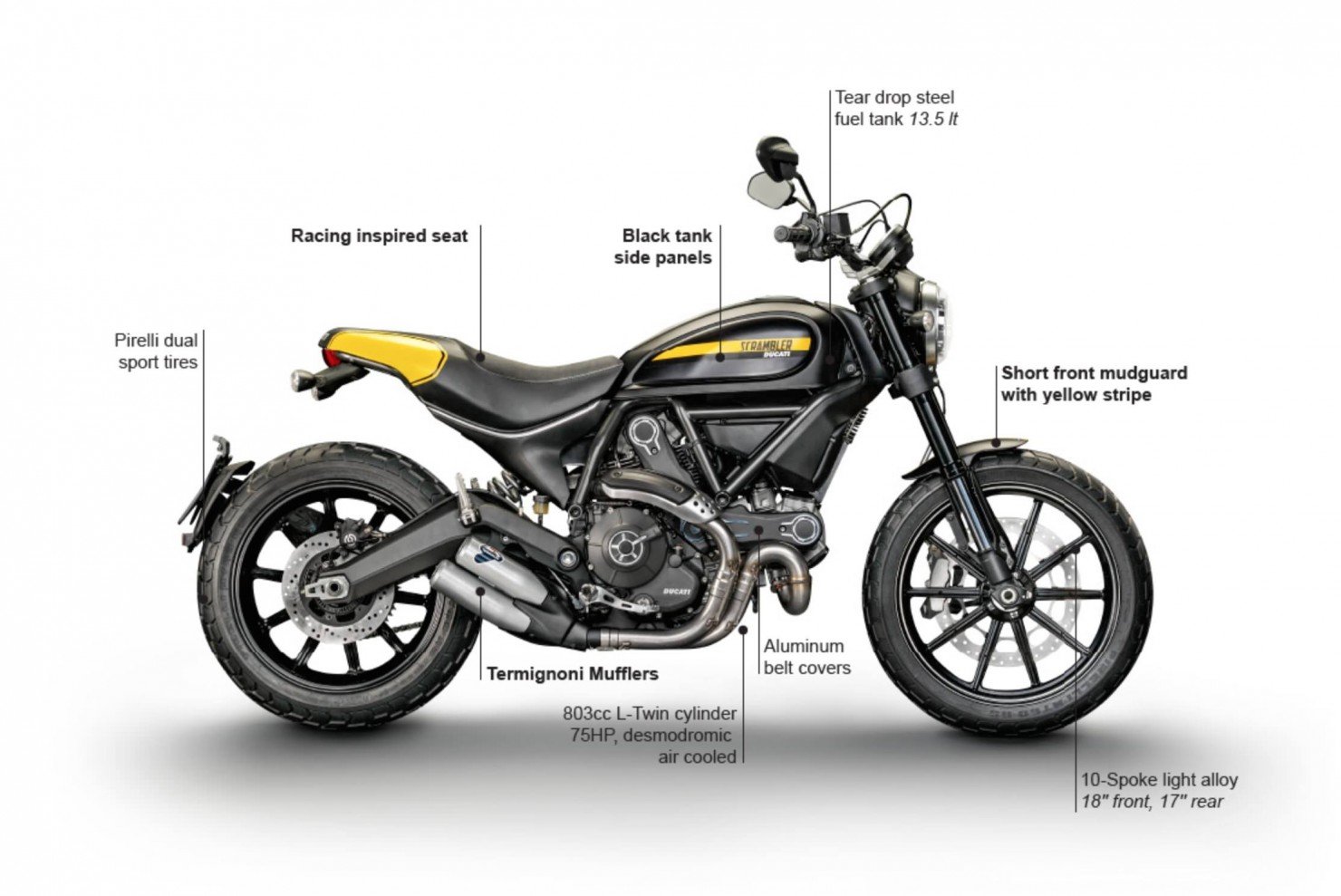 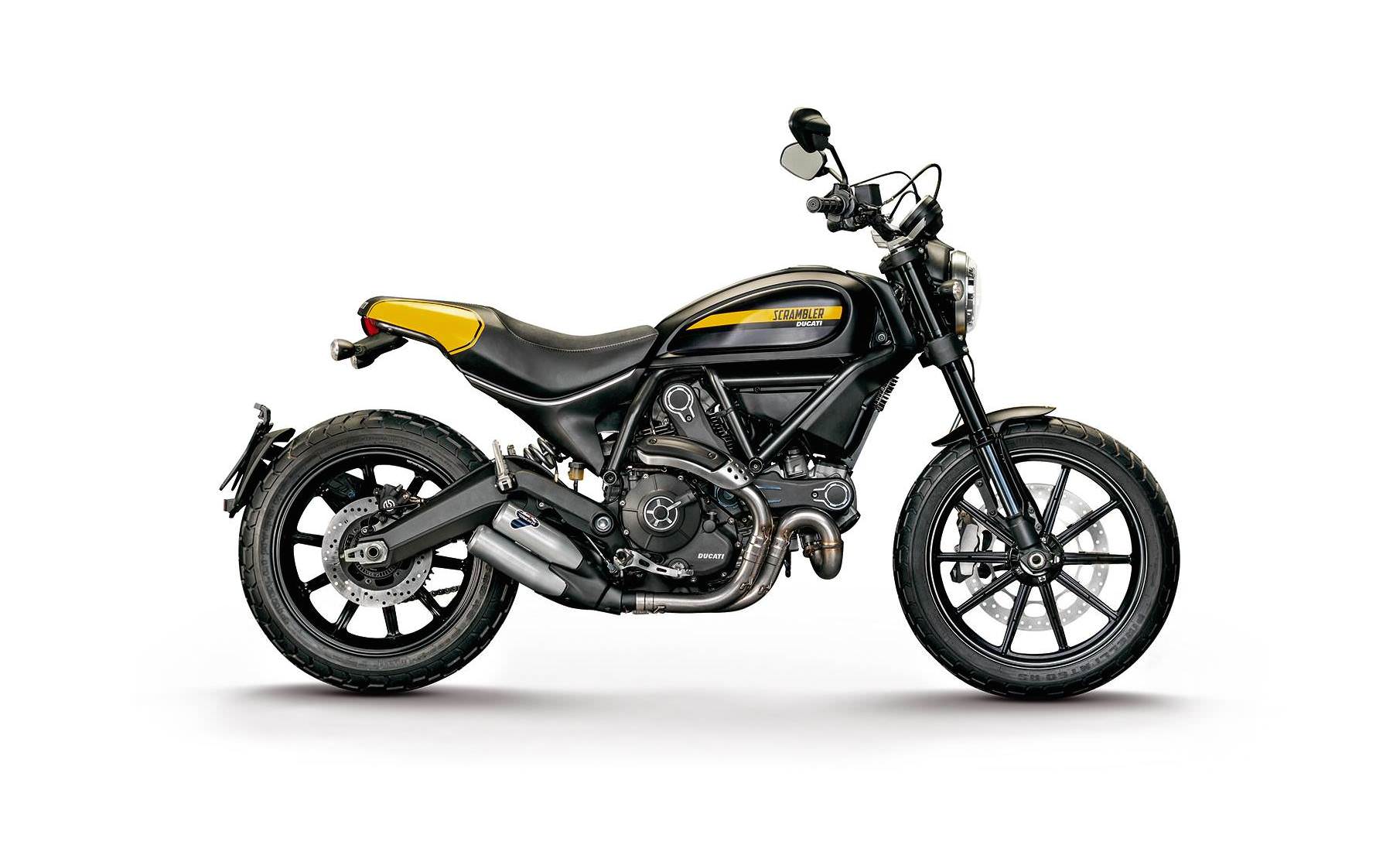