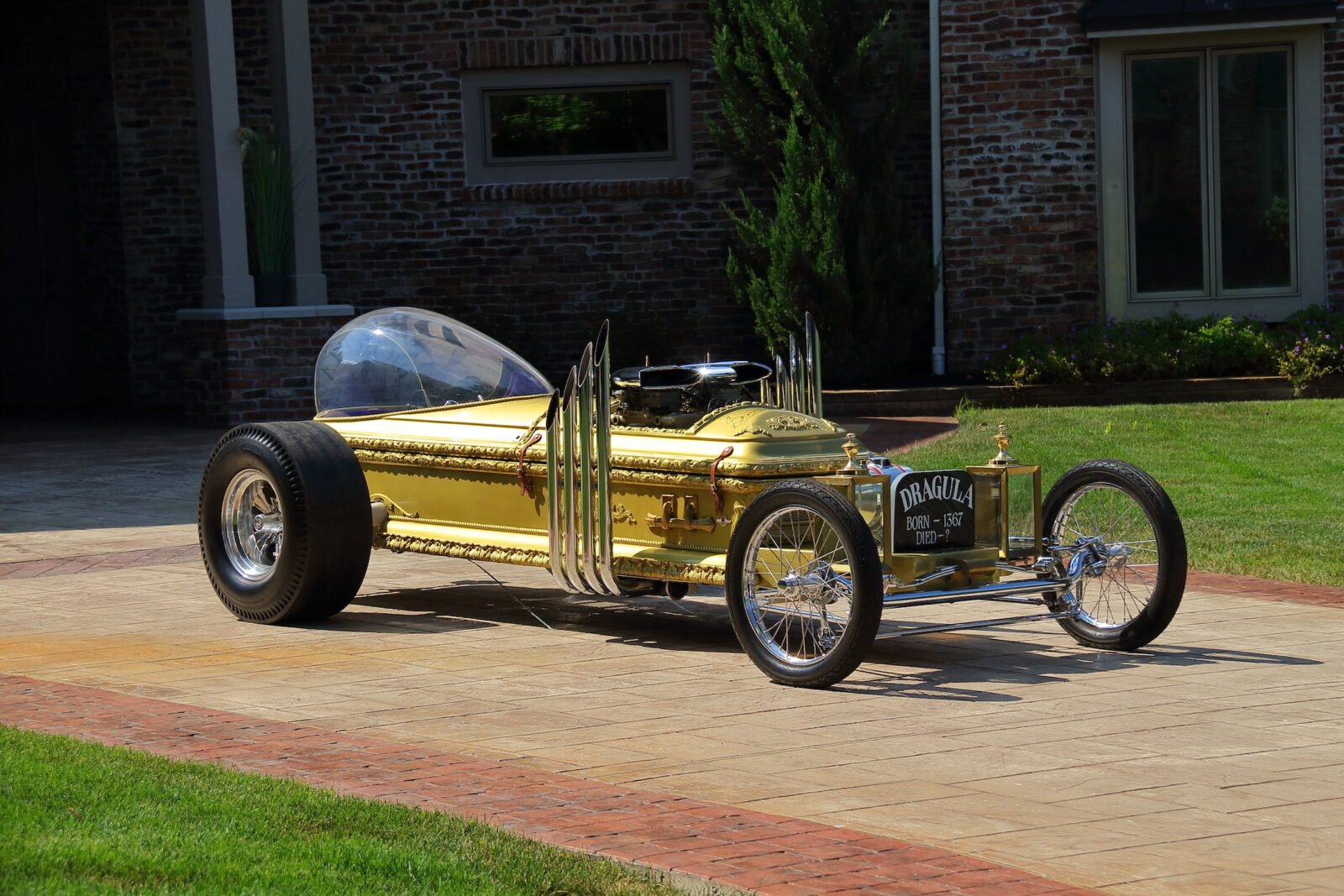 This is the “Drag-U-La,” a coffin-based drag racer that was designed by Tom Daniel then built by George Barris for The Munsters, a 1960s era TV series about a family of relatively benign monsters that lived an American suburban life.

If you grew up watching TV in the 1960s, or reruns in the 1970s and 1980s, then The Munsters will already be familiar to you. It was a staple of the rerun circuit for decades despite the fact that the original show only ran for three years from, 1964 to 1966.

Fast Facts – Drag-U-La From The Munsters

Drag-U-La was originally built to feature in the May 1965 episode of The Munsters titled Hot Rod Herman.

This episode was likely a way to attract drag racing fans to the show, drag racing in the United States was experiencing explosive growth at the time and many people spent their weekends down at the strip.

Above Video: This footage from “The Munsters” shows the storyline featuring Drag-U-La.

The premise of Hot Rod Herman was that Herman Munster, the Frankenstein character, had lost the Munster Koach (the family car) in a bet at the drag strip that went awry.

Grandpa Munster and Herman then spent the next week in the garage building Drag-U-La, so they could take it down to the drag strip and win back the Munster Koach.

In reality of course, the Drag-U-La vehicles that were built were made at Barris Kustom in California under the watchful eye of George Barris, undoubtably the most famous movie car creator in history.

Both Drag-U-La and the Munster Coach were designed by Tom Daniel who worked with Barris at the time, Daniel would design over 80 cars over the course of his career, some full scale and some as scale models for Monogram.

The biggest difficulty that the team at Barris Kustoms faced when developing Drag-U-La was where to source an authentic coffin. 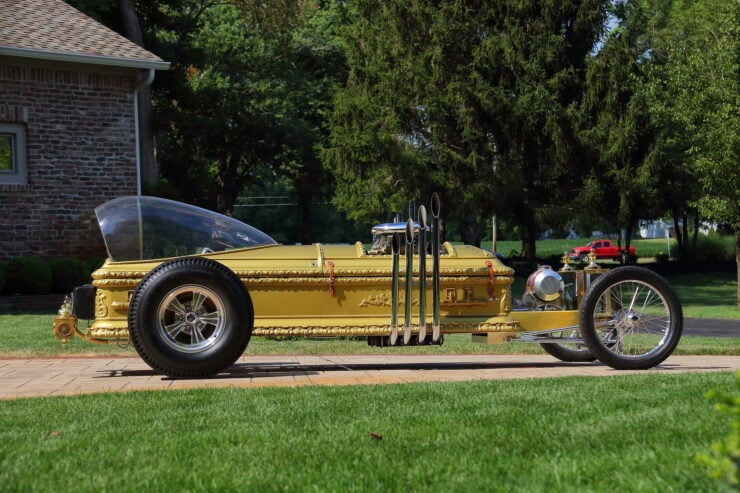 The car uses a real drag racing chassis and running gear, and is apparently capable of impressive 1/4 mile times by the standards of the era.

As it happens, it was illegal to sell a coffin without a death certificate in California at the time, however the resourceful Richard “Korky” Korkes, Barris’s project engineer, managed to secure a deal under the table with a funeral home in North Hollywood.

Korkes struck the deal, paid in cash and then left the funeral home empty handed. He returned later that night with some colleagues to collect the fiberglass coffin that had been discretely left around the back of the funeral parlor.

The coffin was mated to a real tubular steel, front-engined dragster chassis, Barris and his team then cut out two sections of the top and fitted a plexiglas bubble. The car was powered by a 289 cubic inch Ford V8 said to be capable of 350hp and topped by two four-barrel carburetors mounted on a Mickey Thompson Ram-Thrust intake manifold.

A pipe organ-like exhaust was then developed with four pipes on each side exiting vertically with slash cut tips at descending heights, a parachute was affixed to the back, antique lamps were mounted up front as headlights, and a marble gravestone was fitted up front – said to be Grandpa Munster’s license plate “from the Old Country.” 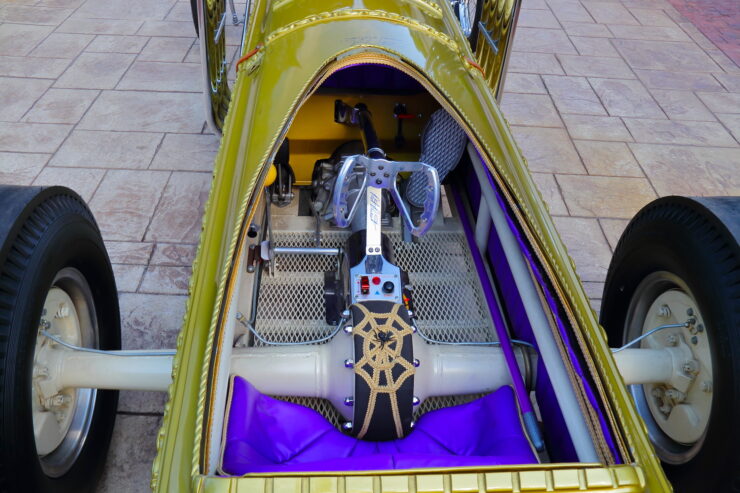 As with many dragsters of the time, the driver was sitting with their crotch pressed up against the differential. You would want to pray the diff didn’t explode.

When it was completed the car was not only functional, but apparently it was genuinely quick. Barris Customs would build five of them in total for use in the TV series and later in the 1966 movie “Munsters, Go Home!”

Some of them spent decades in museums, some went to private collections, and one ended up suspended from the ceiling at Planet Hollywood in Atlantic City.

The example you see here is due to be offered for sale in January through Mecum Auctions, it’s being offered with no reserve and you can click here if you’d like to read more about it or register to bid. 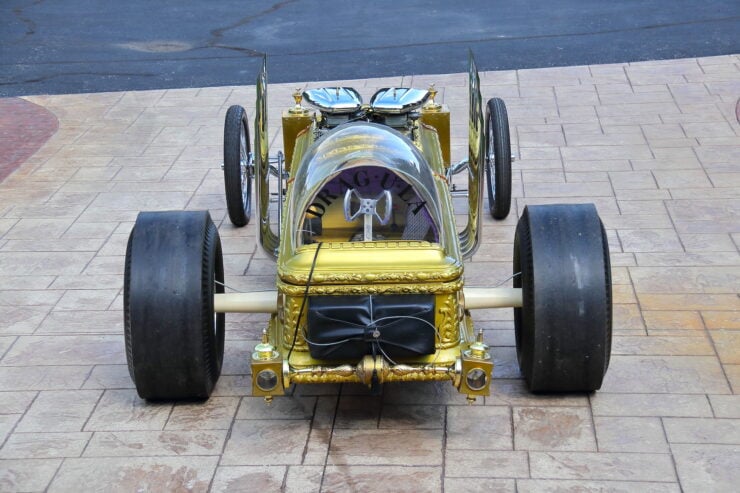 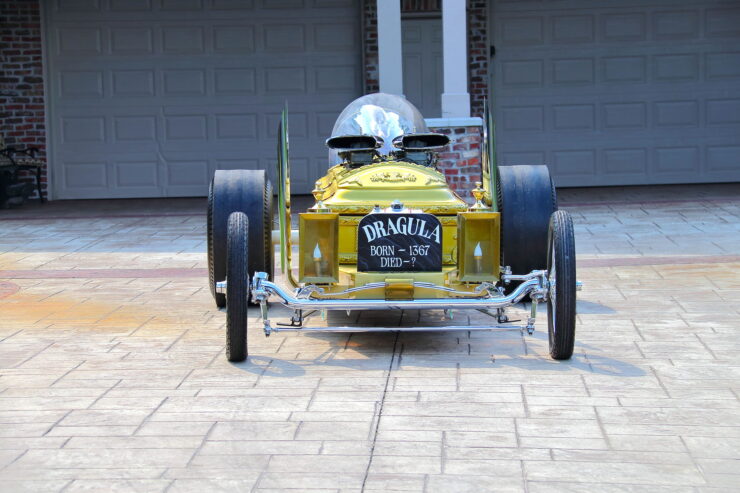 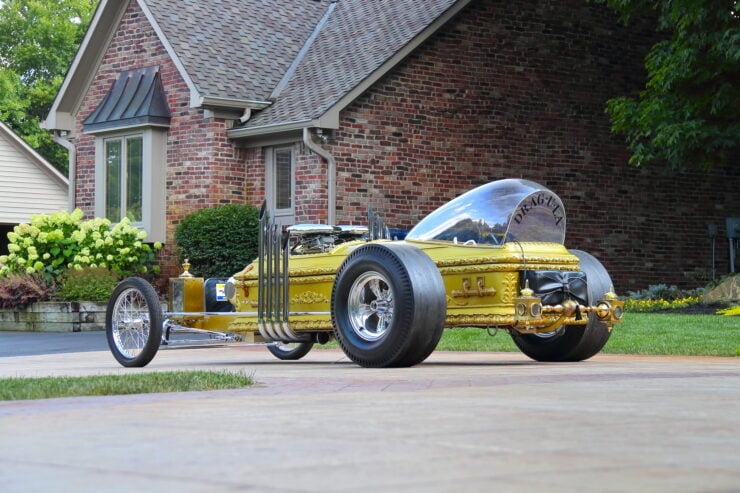 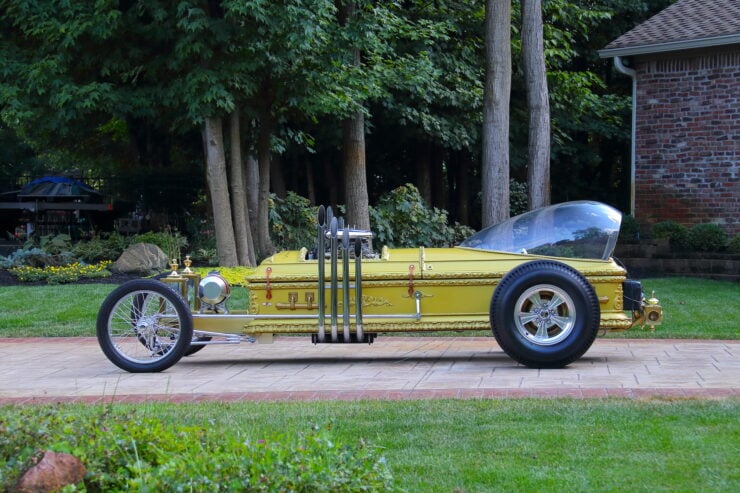 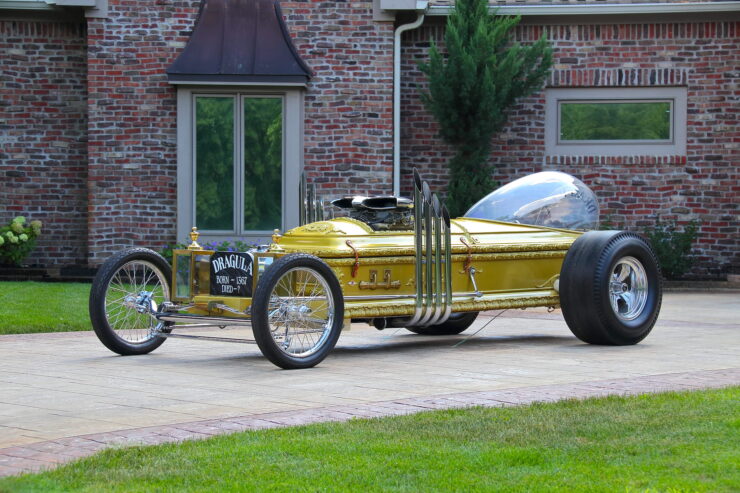 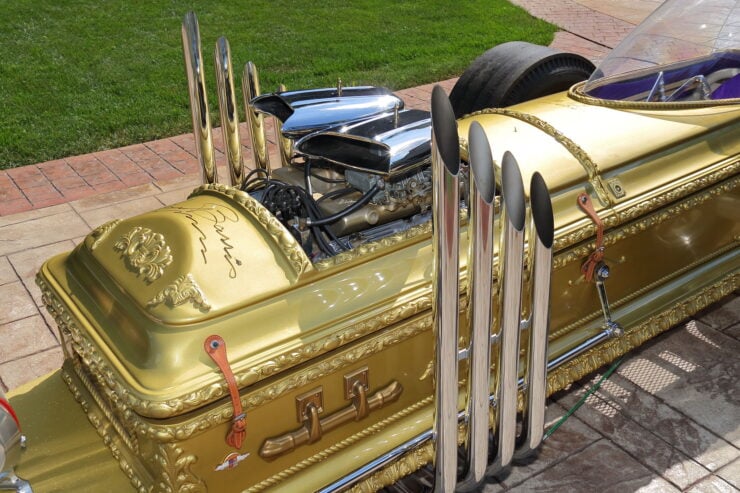 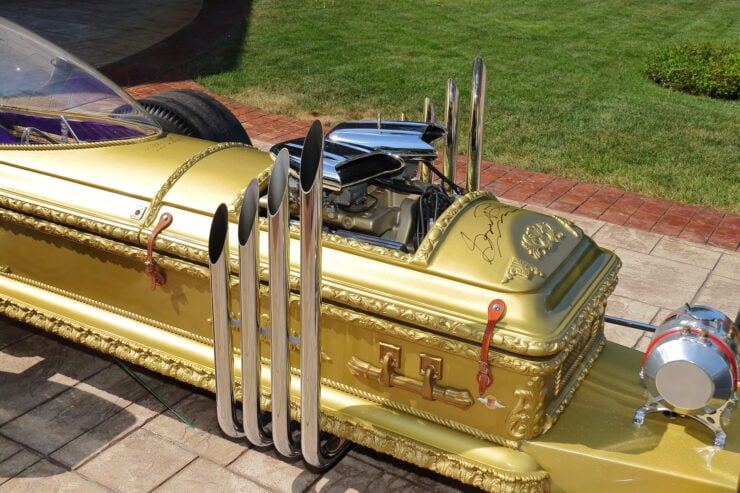 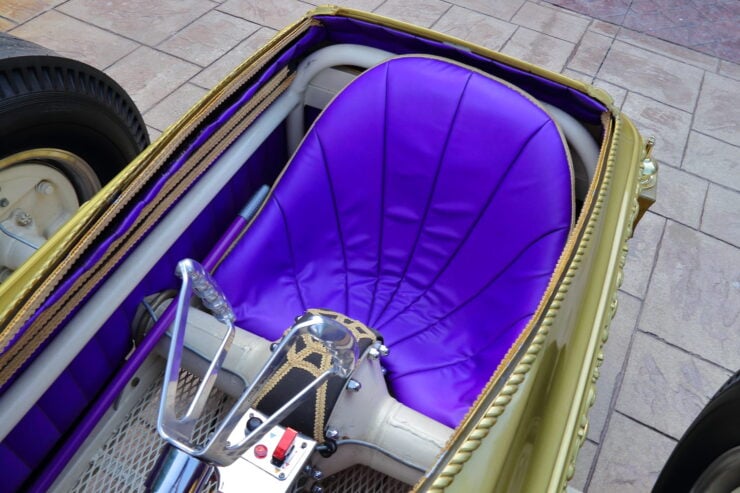 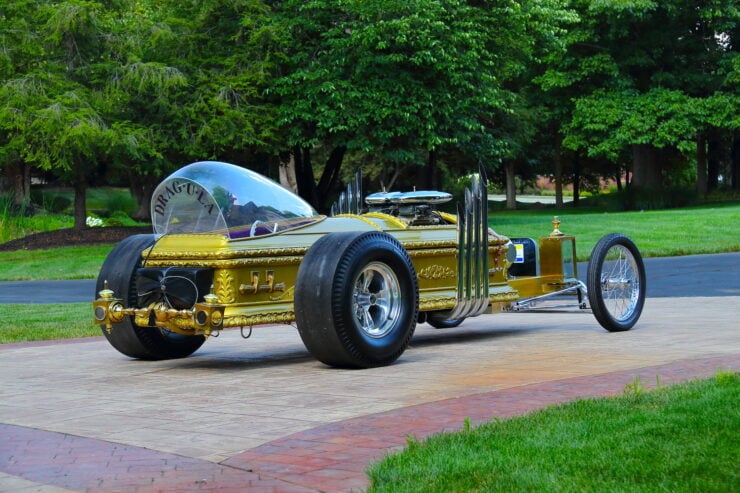