This feature documentary titled Trip Through The River Rouge Plant offers a fascinating insight into the world famous Ford factory in Dearborn, Michigan.

At the time of its construction the River Rouge Plant was the single largest factory in the world, it was intended for automobile production however the first vehicles produced there were actually Eagle-class anti-submarine boats for the US Navy in 1917.

The factory was designed in a modular format to be a comprehensive facility for the mass-production of automobiles. The plant covered 1,096 acres, with 7,250,000 square feet of floor space with 345 acres of glass windows, and 80,000+ workers.

Interestingly Henry Ford believed that a man was happiest when he had one foot on the land and one in industry – so he set aside hundreds of acres of arable land near the plant for the workers. They could take over a piece of land and plant crops for themselves, to sell, to eat themselves, or just for leisure. 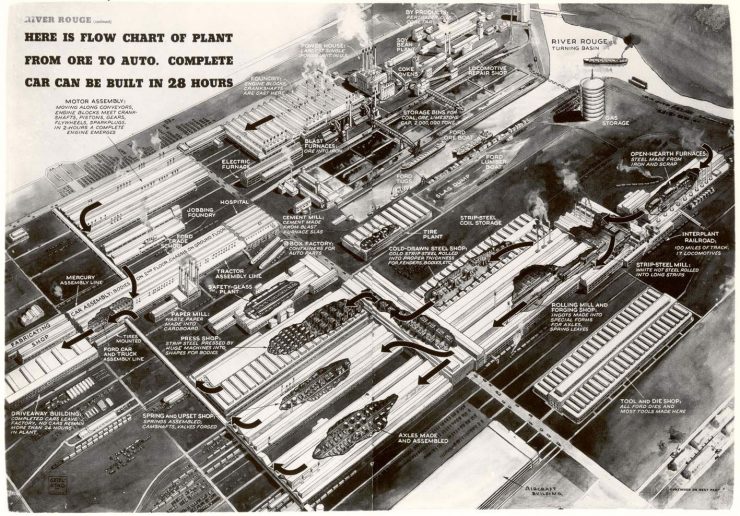 This film gives a panoramic look at the facilities at the River Rouge Plant, starting with iron ore arriving and being smelted into iron and steel, before being used to cast flathead V8 engine blocks, crankshafts, cam shafts, pistons, valves, and just about every other part used to construct Fords of the period.

The body panels of each car start out as steel ingots that are flattened into thin sheets before being cut and stamped by 30 ton presses – presses that are operated with no visible safety measures at all, a far cry from todays factories.

Once all the panels are done they’re assembled on a jig and spot welded into place, before being lowered onto completed rolling chassis and test driven. The sheer amount of manpower that went into industry before the advent of industrial robots and automation is astonishing, and it makes you wonder what factories will look like another 80 or so years from now. 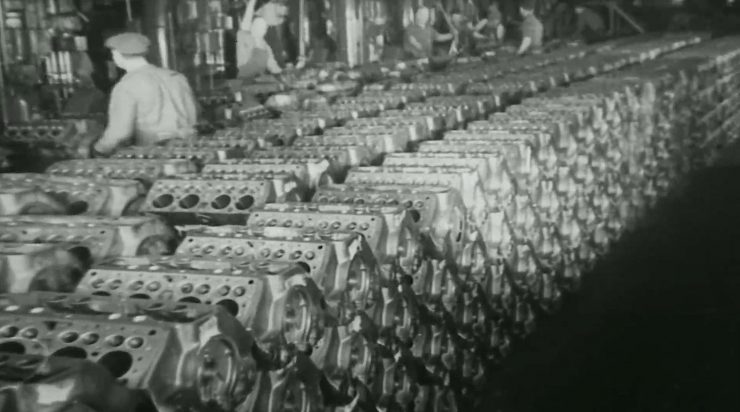