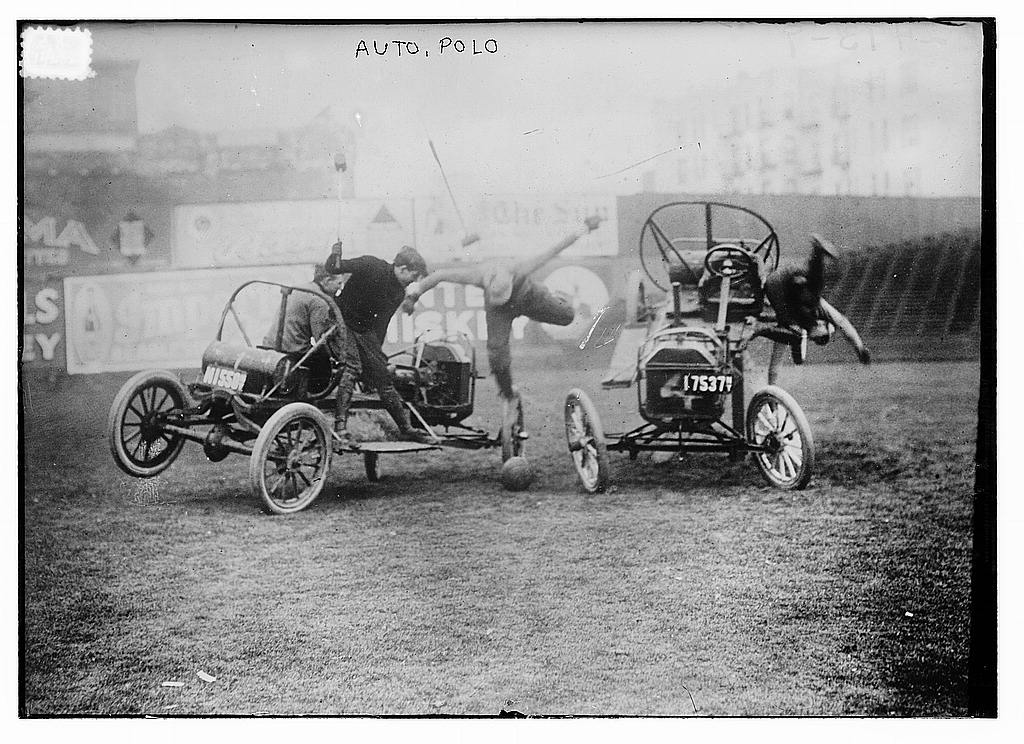 There’s a a lot to be said for the sporting endeavours of the first motorists, “Auto Polo” is a long dead sport that set off in the early 1910s with one event even taking place at Madison Square Garden in New York City.

The rules of the game were much as the same as for the horse based original version, there are goals at each end of the field, men with mallets and a ball that needs to be smacked around. The sport took it’s toll on men and machines with a fairly significant crash taking place in the photographs above and below, you may recognise the pattern on that ball, the sport called for the use of regulation American basketballs.

“The game was played on a football field or in a fairground or park where goalposts were set up. As in polo on horseback, the aim was to drive a ball through the goal, or to keep the opposing players from doing so

Two men formed a team, the driver and his mallet man. The ball, a regulation basketball, was lively upon impact of the mallet and hard to follow and to keep in a team’s possession.

The driver’s skill was a top factor in winning. He had to manipulate his car into leaps forward and backward, to make twists and turns so sharp that sometimes the car rolled over, to race down the field to the opponents’ goal, to protect his own goal and to shimmy back and forth to block the ball driven hard and fast by the other team.

No car but the Model T Ford of the early 1900s had the forward speeds and reverse and brake applied by foot pedals, plus throttle operated by hand, and the transmission system that made such maneuvers possible.

The skills of the young drivers and their mallet men of Natoma’s auto polo teams synchronized like gears of a smoothly-running machine.

As the driver whipped his car back and forth, stopped and twisted and turned, his mallet man, standing on a step at the car’s right side, leaned and turned to hit the ball or to take it from his opponent. To block a drive by the other team, he used arms, legs, all his body. And at game’s end, he usually was bruised and often was bloody.

The mallet man, too, frequently was thrown from the car. He had little to hang onto. Although the driver used no seatbelt and in rollovers often was thrown out, his seat and a rollbar on the car gave him more protection.

All the players wore heavy leather leggings. These helped to prevent sprained and broken legs. Some, such as Ray Hall, wore helmets but others at first scoffed at helmets&endash;then after they got hurt they changed their minds. Red Lyon was a driver who came to be a believer: He wore this helmet every game after being knocked unconscious by a blow on the head in a free-for-all tangle of cars and players.

Playing time was 60 minutes. Quarters and halves, with rest periods between halves, were as in football. The teams changed goals at the half.

The game began with each team at its own goalposts, the ball in the center of the field. At the drop of the referee’s red flag, the cars came charging, the drivers striving to block the car of their opponent.

After a score, the team that made it had a try for an extra point as in football. This field-goal try was from the 25-yard line. On the 10-yard line, the opposing team lined its car crosswise of the field and attempted to block the ball. The result usually was another noisy scramble, often a collision.

The auto polo cars had no mufflers and the roar of the engines, the screech of skidding tires, the shouts and screams of the spectators, helped keep interest at fever pitch.