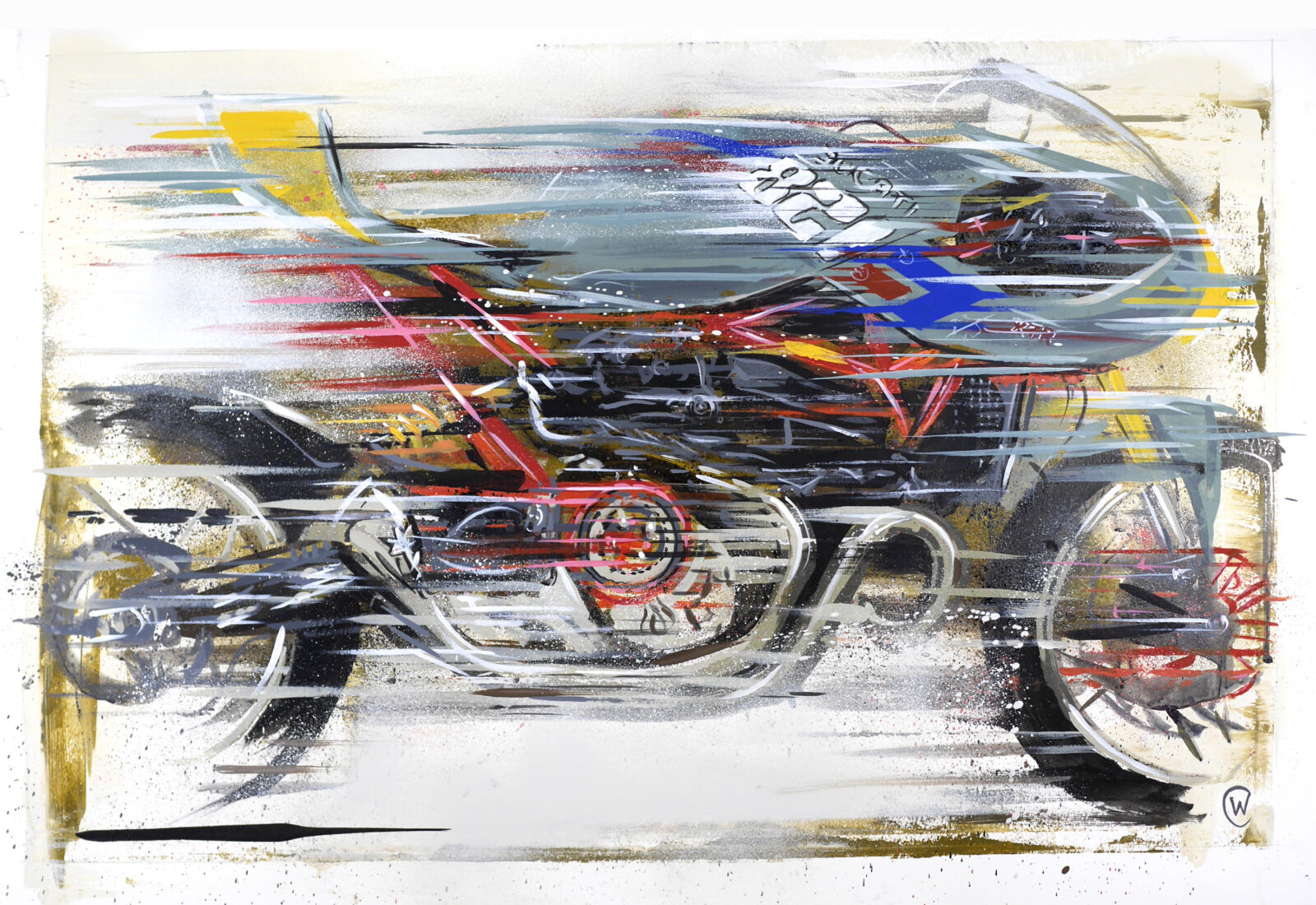 This article was written by Chris White aka Buzz Vizualz, it gives a detailed look into his work and his inspiration.

The motorcycle, its construction and purpose is a metaphor for life. Each engine creates its own “big bang” with many repetitions along a timeline. Raw materials are engineered to sculpt its individual anatomy that all work in sync with each other, or not, to create energy and movement. Yet without human interaction they are static. The heart of the machine is still.

Open the throttle and hear the dragon awaken, tempting you to jump on its back and fly. Respect the dragon, for it can cause injury or certain death if taken for granted. Be mindful of the way. Ahead, to the sides and not too much behind you. And its shadow. The dragons physical beauty and power is a heady brew that must be respected.

Each individual dragon can sometimes be instantly recognisable to the discerning eye, but not always. The main idea for my approach to image making is to render only parts of the vehicle and leave the rest to pure imagination. An after image so to speak. Imagine the machine screaming past you at speed. Your eyes will only see certain parts and your brain at a later stage will construct the rest of it in its own way. 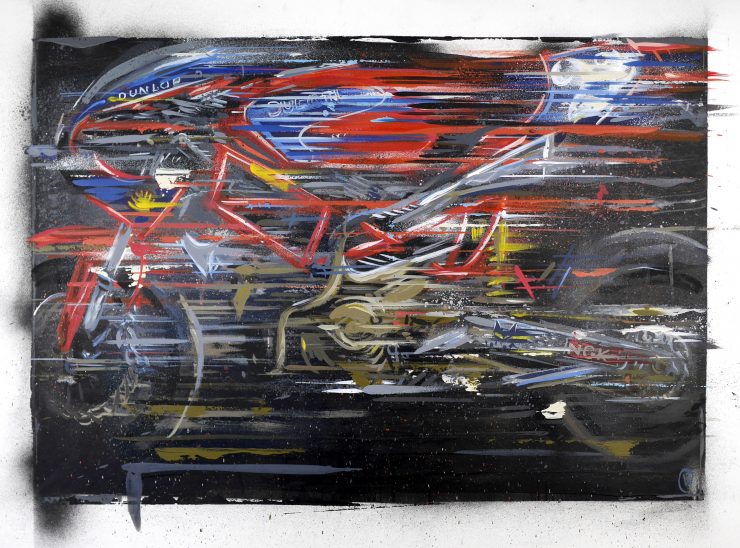 Above (and Header): XTR Pepo Customs

Kinetic patterns that flow. Using lines and abstract textures to convey speed and the feeling of motion. These are major factors that influence my work. I use mixed mediums to construct artefacts that combine graphic and fine art sensibilities. I really enjoy the challenge of using mixed mediums. The control of finer lines painted with brushes, the gestural speed strokes and the lack of control of spray cans. Letting the nozzle blast its spray over highly detailed sections mixes up the composition.

Street art textures, natural forms and architecture all have an influence on my design ideas. Also the Japanese Tea Ceremony and its three formal elements combined have a massive influence on my compositions. The grid also plays a huge part in what I do regarding placement of formal and informal elements

Substrates include metal, wood, paper, collage and found materials. I love texture and decay. I love the combinations of tight lines and edgy textures. “Wabi Sabi” sensibility is a major passion of mine through my work and everyday life. The aged and the new in union.

Above: A Triumph Speed Twin

My recent Motordrome project tries to visualise centrifugal forces that these pioneering motorcycles and riders had to endure. Travelling at high speeds, on splintered wood planks, brakeless and at severe angles they raced to a finish line. Shrimp Burns after falling off at high speed couldn’t wait to get out of the hospital to get back to the race. Battered and bound he got back onto the dragon and flew. Such passion or foolishness. Either way totally focussed!

Your comfort zone will kill you?

At that exact moment in the art world the Futurists also pushed the boundaries of image making. Abstract shapes and patterns replaced representational romanticism . The age of the machine! Abstract expressionism simplified objects to simple shapes and forms. Early 20th Century art movements excite and influence me to create a mixture of realism and pattern based outcomes.

Having retired from many years of teaching formal art at college/university level I have studied many art movements. Their unique qualities and the impact they have on societies. The context and the personal developments each artist has to endure to fly with their work. This relates so much to the individuals who build their motorcycle masterworks and to me as a graphic artist. 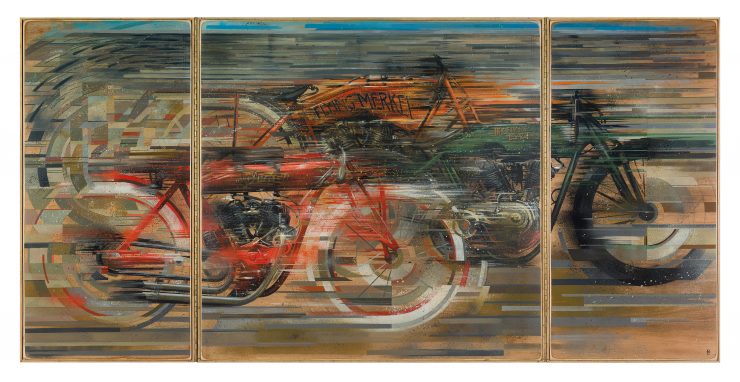 The format for the Motordrome project is based loosely around religious iconography and the Triptych. The trinity of three motorcycles in union and the energy flowing throughout. I do see similar qualities in how riders worship their motorcycles and the bond between human and non human. A common theme of spiritualism

Future projects will involve laser cut metal and will be sculptural. But that’s in the future! My main focus is the moment. Whilst working on my projects I calculate time that is focused on developing the image as recognisable, formal elements and also embed time that is free flowing and unrecognisable. Where An hour will pass and I look at what I have done and realise that instinct has taken me to a part of the piece that I cant control. Again, this relates to the rider and the machine. A meditative state similar to the rider and the ride. All still firmly embedded in the theme of movement and forward motion and the terrain.

In a world driven by mass production, these builds I study are examples of individuality and freedom to respect the timbre of classic motorcycle design. The alchemists will then embed their own imagination and signature into contemporary constructions. They too challenge their skillset build after build.

I have had the pleasure of being able to develop my visual language using studies and muses of some of the best dragon builders in the world. Each build I paint motivates me to push the boundaries of my approach and relationship with graphic image making further. Many years of working in the field of graphic design has taught me to recognise and promote the individuality of each company or brand.

Max Hazan noticed a different approach to how motorcycle art is created when seeing my work and has helped me to raise awareness of who I am visually. He was the first person I approached with my work and has been so encouraging and amazingly supportive to me.

I want to take a “moment” to send love and light to these people who have noticed a different misfit in me on the block. They have befriended that misfit and encouraged me to continue my art. Their support and friendship is so empowering. 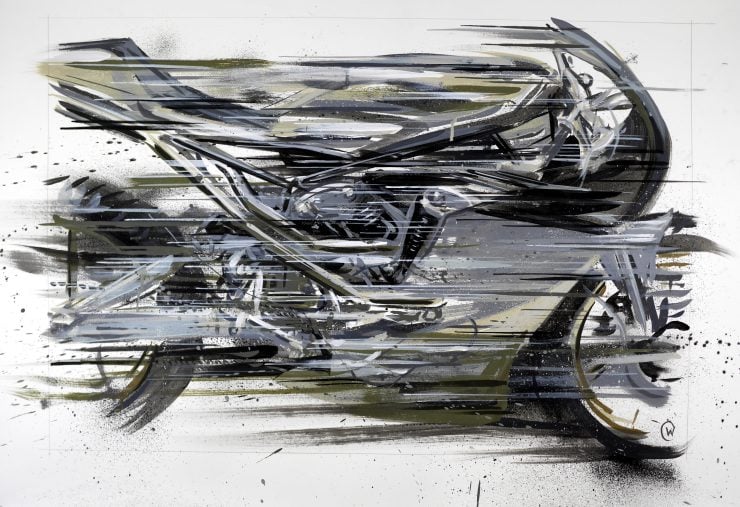 I also want to commend Bobby Haas for what he is doing to celebrate, raise awareness and curate motorcycle artistry. He has motivated me by supporting my works and I have the honour of saying that I have my work in his museum. Validation isn’t the driving force in life, but in this case I can be proud to say that my work sits alongside a spectrum of artefacts that reflect individuality and motorcycle craft of the highest standard.

The horizon beckons me. But experience and the universe gently encourage me not to dream too much and enjoy the learning experience of uncertainty, the flow of energy and the now! I would love to collaborate more with motorcycle and automotive builders to continue this theme. I am actively seeking representation from any individuals who see my work and also in search of galleries who would like to show what I do worldwide

Its been a tough few years developing what I am doing and remaining positive about where my work is going. My work is relatively new on the scene and I very much hope that exciting opportunities are going to happen.

The subjects that I select to paint are also in flux and I intend to create outcomes that are purely abstract and are energy driven. Still focussed on the object passing you at speed and the disruptive patterns made by that machine in whatever form 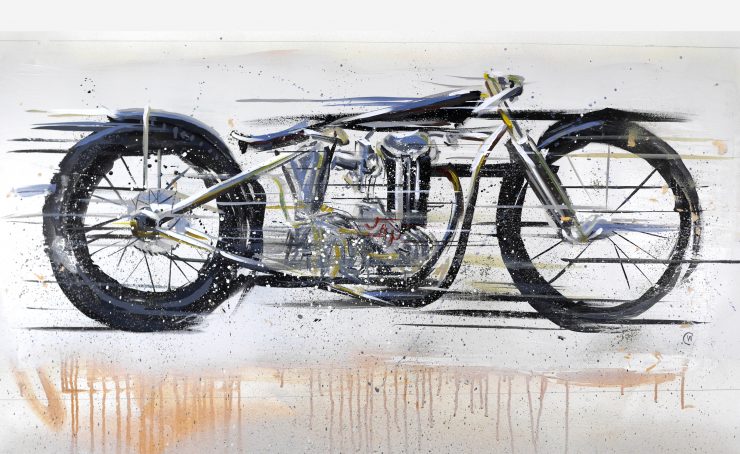 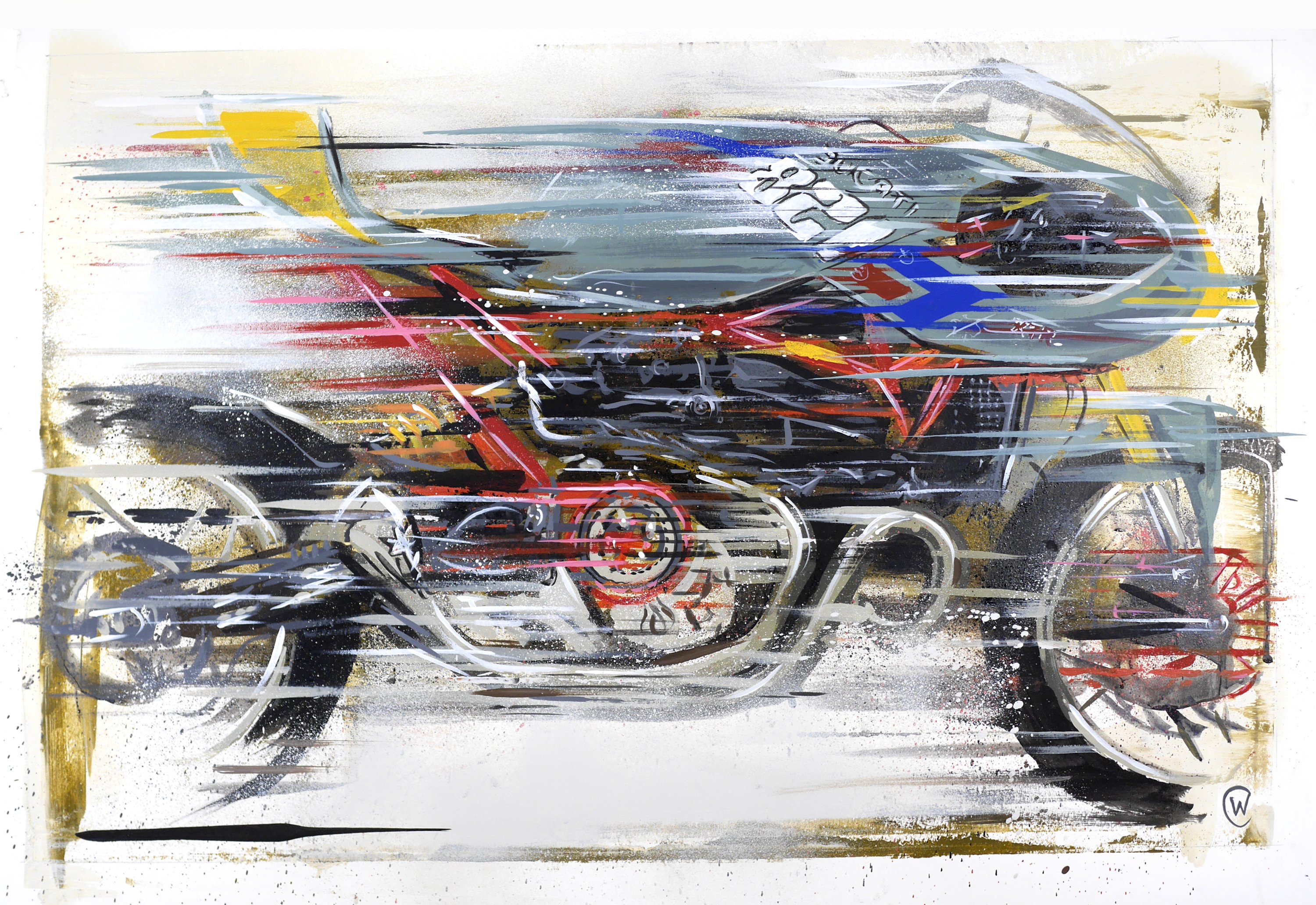