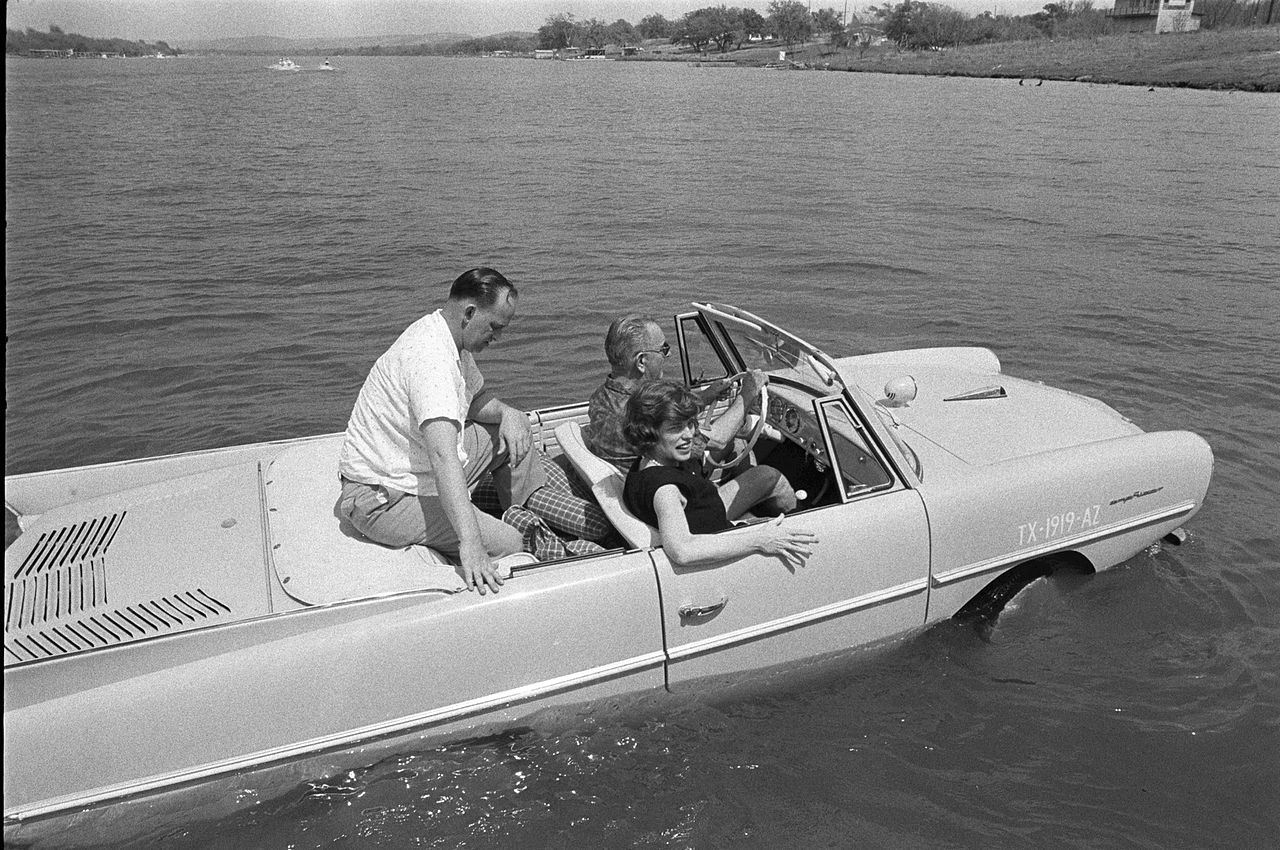 Above Image: President Lyndon Johnson taking guests on a tour of the lake.

The Amphicar was American President Lyndon Johnson’s favorite car. It was the car in which he would take unsuspecting guests for a drive around his ranch and while everyone was calm and happy he’d suddenly drive towards the lake yelling “The brakes are out”.

The little Amphicar, terrified passengers, and the President with a wicked sense of humour, would plunge into the lake but, instead of having to swim for their lives the passengers found the little Amphicar was happily floating as Johnson engaged propeller drive chuckling with mirth as he took them for a cruise around the lake. The Amphicar was, you see, both car and boat and as such it was enormous fun. 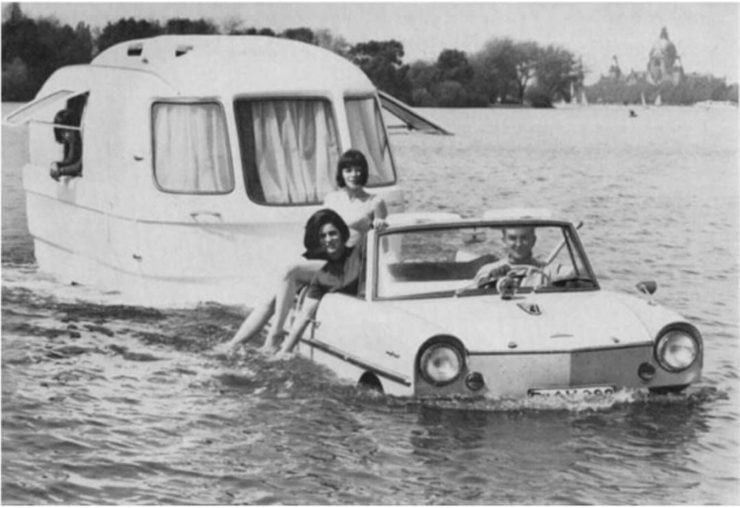 The Amphicar: a “Car of the Future”

The Amphicar was claimed to be “the fastest car in the water and the fastest boat on the highway.” And although its performance as a car, and as a boat, was mediocre, yet it had that amazing ability to traverse land and water with efficient ease.

The Amphicar was the brainchild of German designer Hans Trippel who is said to have been inspired by the amphibious military vehicles of the Second World War, especially the Volkswagen Schwimmwagen (translated: Swimming Car).

Trippel however was already producing a simple amphibious car in the 1930’s and made amphibious cars for the German military during the war, and so it is more likely that his ideas about an amphibious car were influenced by the Schwimmwagen to some extent, and that may have helped him refine his post-war designs; the Alligator and the Amphicar. 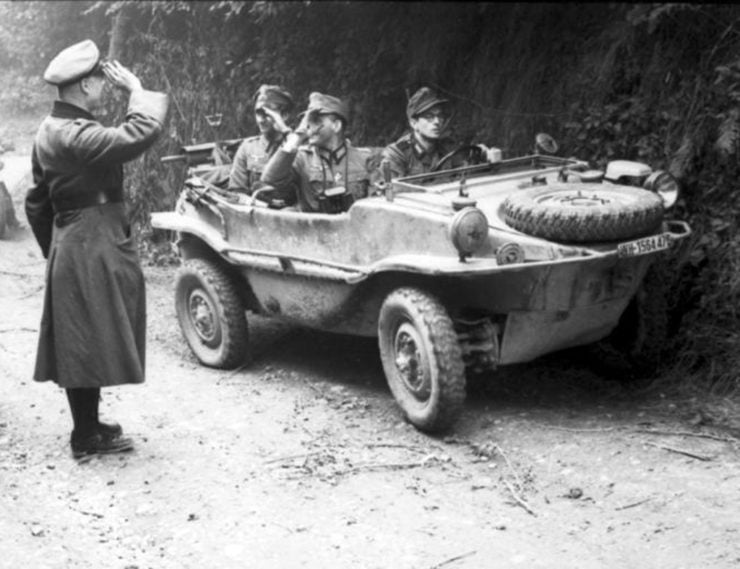 Above Image: A Volkswagen Schwimmwagen during WW2.

The Schwimmwagen was more primitive than Hans Trippel’s Amphicar: in the Schwimmwagen the propeller had to be manually lowered from the rear deck when wanted for a water crossing, and had to be manually raised up into its storage position when going up onto land. The Amphicar could move seamlessly from land to water and then back to land again, thus making Lyndon Johnson’s party trick easy to accomplish.

In designing the Amphicar Hans Trippel used a similar design concept to the Schwimmwagen but refined it, and turned it into a quite stylish civilian vehicle. Like the Volkswagen based Schwimmwagen the Amphicar used a rear mounted engine and transmission, and that transmission was made by Hermes, the same company that made transmissions for Porsche at that time. 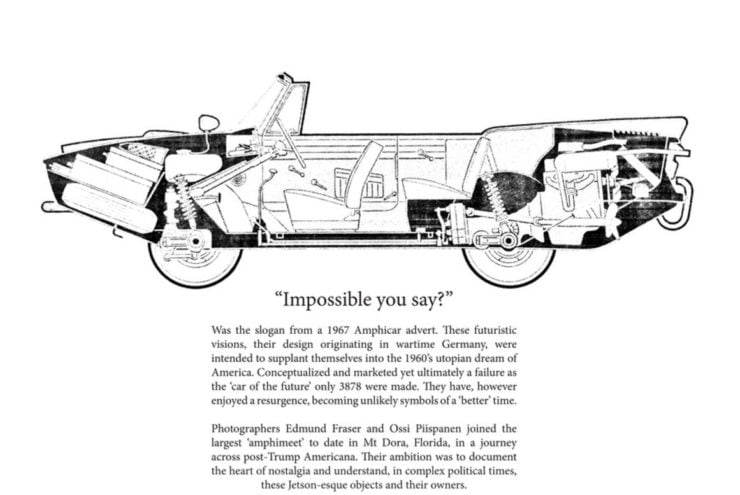 Trippel chose not to use a Volkswagen engine however but instead used the British Standard SC water-cooled inline four cylinder engine as used in the Standard Triumph Herald 1200 passenger car. Trippel experimented with a number of engines including the one used in the Mercedes 190SL before he settled on the Triumph engine which had a capacity of 1,147 cc, and as installed in the Amphicar delivered a power output of 43 hp @ 4,750 rpm.

Over the six years of production the Amphicar was installed with progressively larger versions of that same engine, a 1296 cc and then a 1,493 cc unit delivering 53 bhp. The larger and slightly more powerful engines giving the Amphicar modest improvements in its somewhat pedestrian performance, summed up in the car’s model name, the Amphicar 770, which stood for 7 knots in the water and 70 mph on the road. 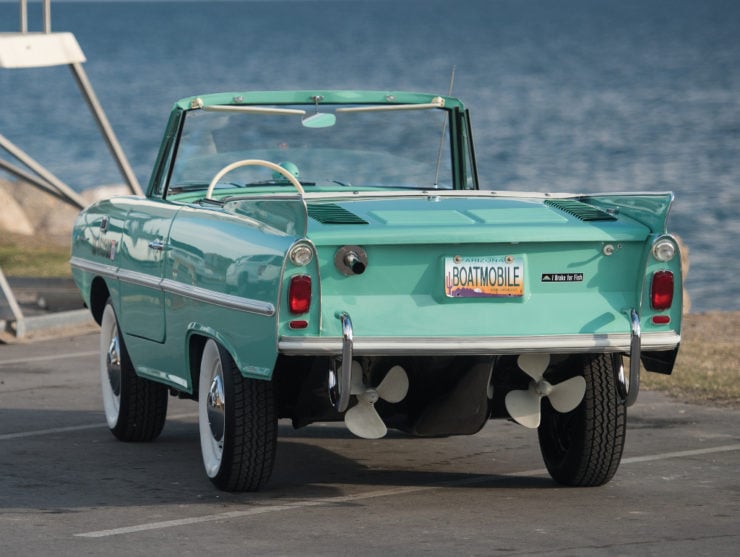 The transmission of the Amphicar was based on the unit used in the Porsche 356 but was a unique design which provided a four speed all synchromesh manual gearbox with reverse for use on land, and a forward-reverse gear to drive the twin propellers mounted under the rear of the car when in the water.

The Amphicar used the front wheels as its rudders so steering was simply by the steering wheel whether on land or water. This method of steering worked well enough but of course did not provide the sort of maneuverability that an outboard engine would.

The doors were provided with double seals to ensure against leakage: and the door seals were one of the items in the Amphicar that required conscientious maintenance. In case of leakage the Amphicar was fitted with an efficient bilge pump, although of course this depended on the engine running to power it.
A properly maintained Amphicar did not leak at all and could be left in the water with the engine off for long periods of time, so it was not dependent on the bilge pump to keep it afloat. But if a leak occurred then, just like a leaky boat, it could of course sink. 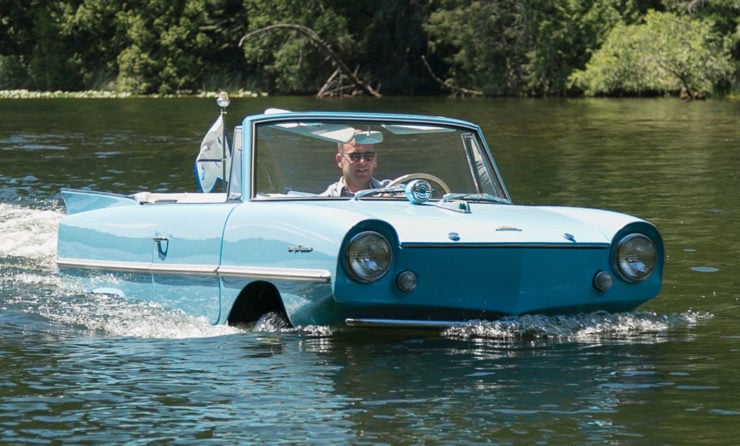 Just as drivers of four wheel drive vehicles who take their cars to the beach for fishing have to carefully wash the underside of their car when they leave the beach the same held true for the Amphicar. Steel bodywork rusts, and to prevent rust requires conscientious maintenance. After use in water the Amphicar required greasing at thirteen points including one that required the removal of the rear seat. 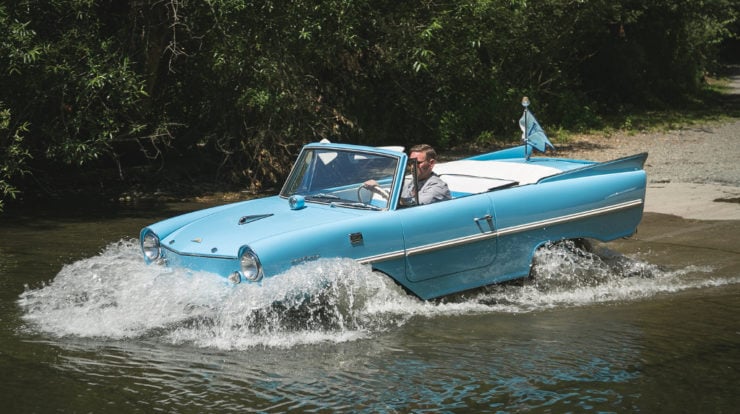 The Amphicar was offered in four colours; Beach Sand White, Regatta Red, Lagoon Blue and Fjord Green, and there were a range of optional extras such as folding oars that were stored under the front seat in case paddling became desirable, or necessary. 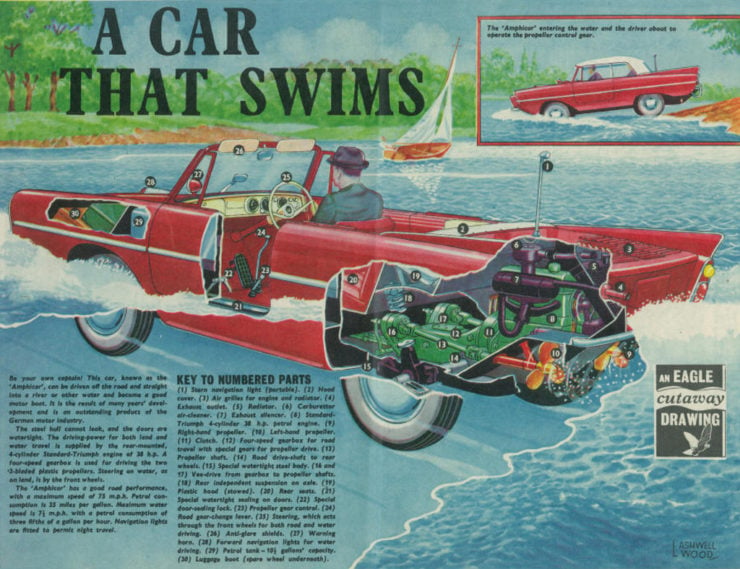 Brakes: Drums front and rear with special liners for improved ability to operate when wet, such as when the vehicle was coming out of the water.

Transmission: Four speed manual gearbox originally based on the Porsche 356 design and made by Hermes, who manufactured the transmissions for the Porsche 356. To this four speed all synchromesh gearbox with reverse gear was added a forward/reverse transmission to control the twin nylon propellers used to drive the car in water. Clutch was a single cushion disc dry plate.

Electrical System: The electrical system was 12 volt positive earth by Lucas of Britain (aka “Prince of Darkness) with some parts by Bosch and Hella. Because the Amphicar was both car and boat it was fitted with navigation lights and American cars were fitted with a flag where regulations so required.

Manufacturing: Made by the Quandt Group at Lübeck and also at Berlin-Borsigwalde. Total production  was 3,878 cars which were sold between 1961-1968. 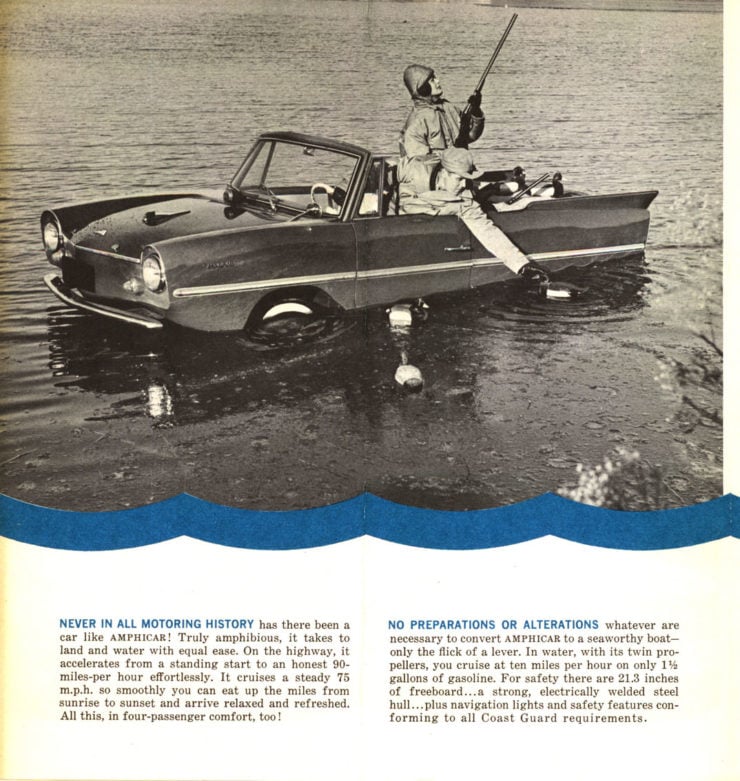 Although there are many who criticize the Amphicar it was a pioneering vehicle that has built up a strong and enthusiastic user base in the International Amphicar Owners Club . Among the famous people who owned or operated an Amphicar are previously mentioned President Lyndon Johnson, John Lennon, and more recently pop star Madonna who used her Amphicar in her music video “Burning Up”.

Hanns Trippel actually began his attempts to create an amphibious car back in the pre-war 1930’s and entered limited production of his Trippelwagen SD3 in an old abattoir in Homburg/Saarduring. As Germany entered the Second World War they commissioned Hanns Trippel to build these vehicles for the German military and to enable more large scale production the way was made for his company to use the Bugatti factory in Molsheim/Elsass for this purpose. After the war he created the gull wing car door as used on the Mercedes 300SL before getting back into his vision for an amphibious car.

During the 1950’s the Amphicar Corporation was formed and Hanns Trippel designed his first post-war amphibious car, the three seat Alligator. The prototype interested Quandt, who had shares in BMW, and so with their investment an improved version of the Alligator was created, which was the Amphicar. The main market for the Amphicar was expected to be the US recreational market, but Hanns Trippel’s Amphicar was designed to not only be a recreational car but also a specialist emergency vehicle. 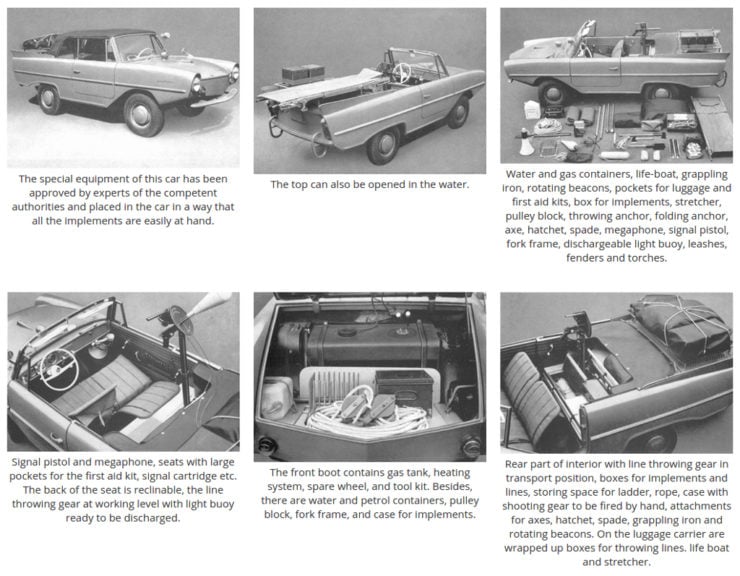 The Amphicar could be ordered with lifesaving and rescue equipment and some Amphicars were purchased by the German Police for this type of role. The Amphicar provided a significant safety factor in freezing conditions if a rescue team needed to cross a frozen river for example: if the ice covering the river broke as the Amphicar was crossing it the Amphicar would float, saving the crew from immersion in ice cold water and the hypothermia that would result. Indeed the Amphicar is noted for being exceedingly adaptable and is said to excel not only on land and in the water, but also on snow.

Hanns Trippel’s Amphicar managed moderate success, with the viability of production of the car being killed off in 1968 by new US regulations on vehicle standards. With it no longer viable to continue production the Amphicar factory was closed that year. Subsequently the Amphicar Corporation’s inventory of spare parts was purchased by Hugh Gordon of Santa Fe Springs, California, and he remains the primary source of parts for owners of these amazing vehicles.

Although the Amphicar is no longer in production Hanns Trippel’s idea for an amphibious car was too good to completely die. Nowadays if you want a twenty-first century amphibious car you might want to have a look at the Aquada at Gibbs High Speed Amphibians.

Hanns Trippel was a visionary, and the surviving Amphicars which were the product of his vision are lovingly cared for and enjoyed more than fifty years after they went out of production. And his idea for amphibious vehicles lives on. 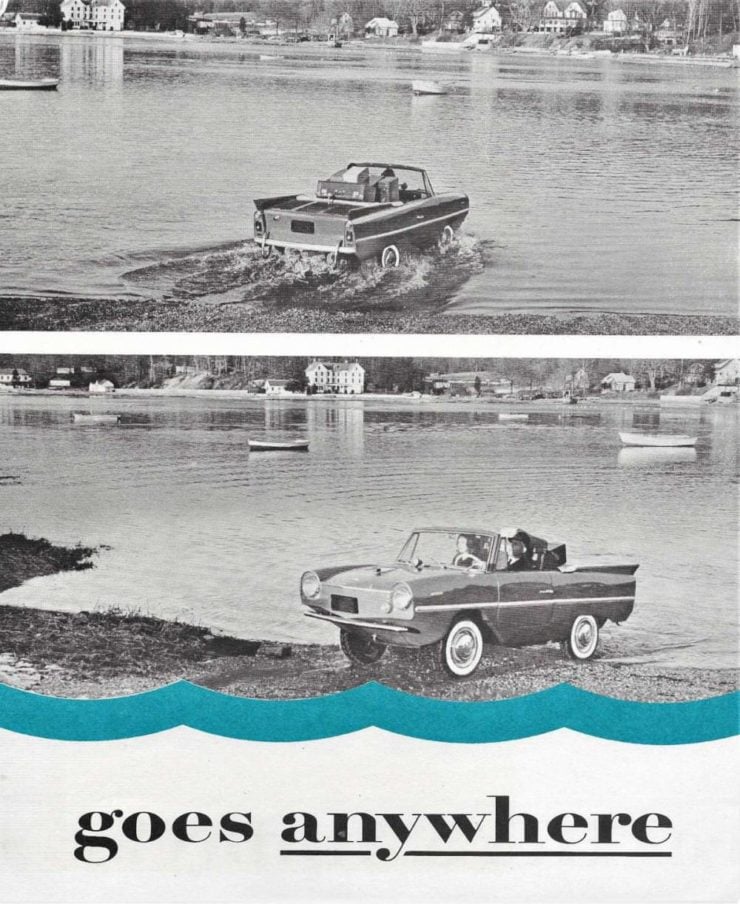 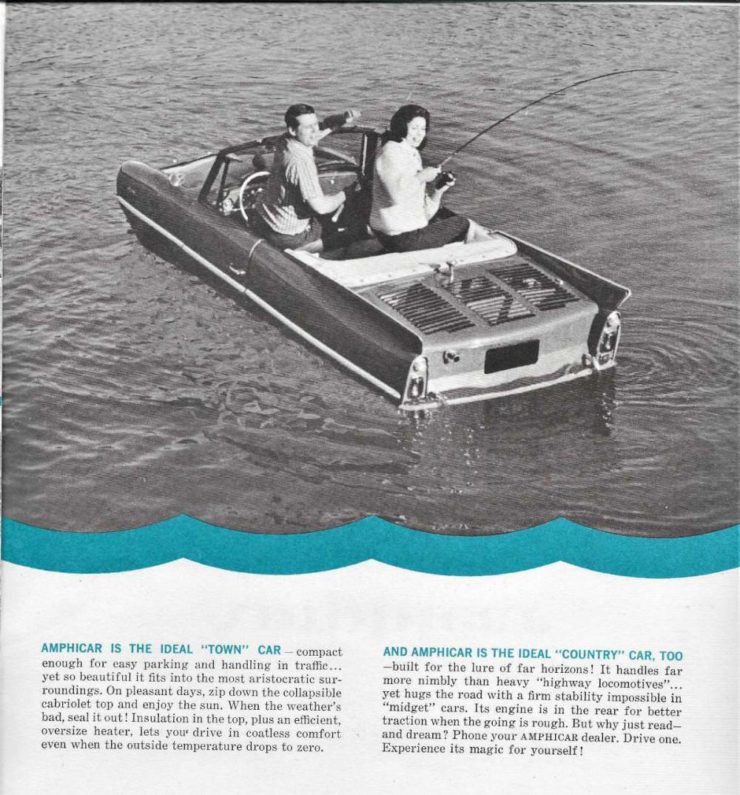 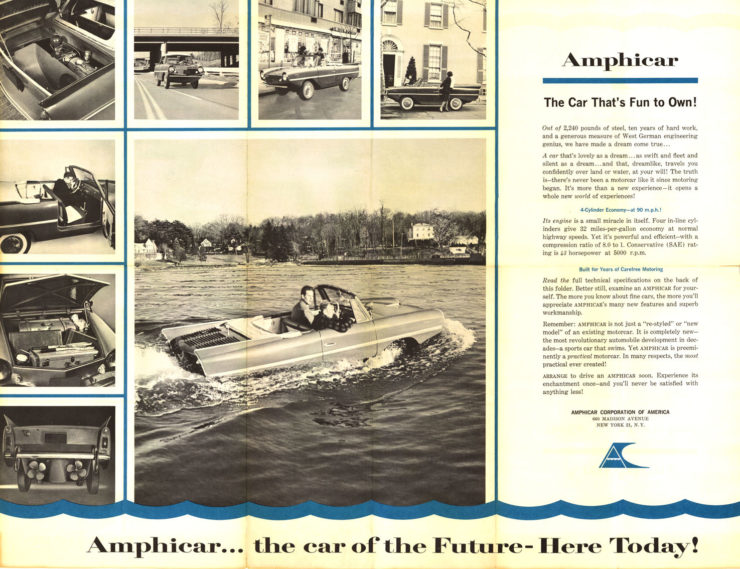 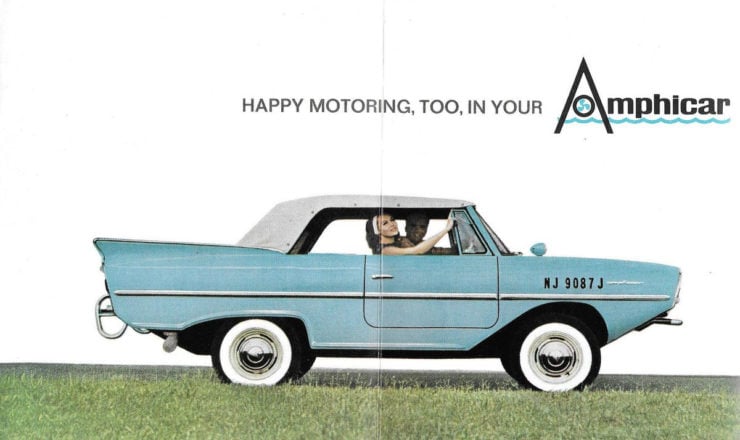