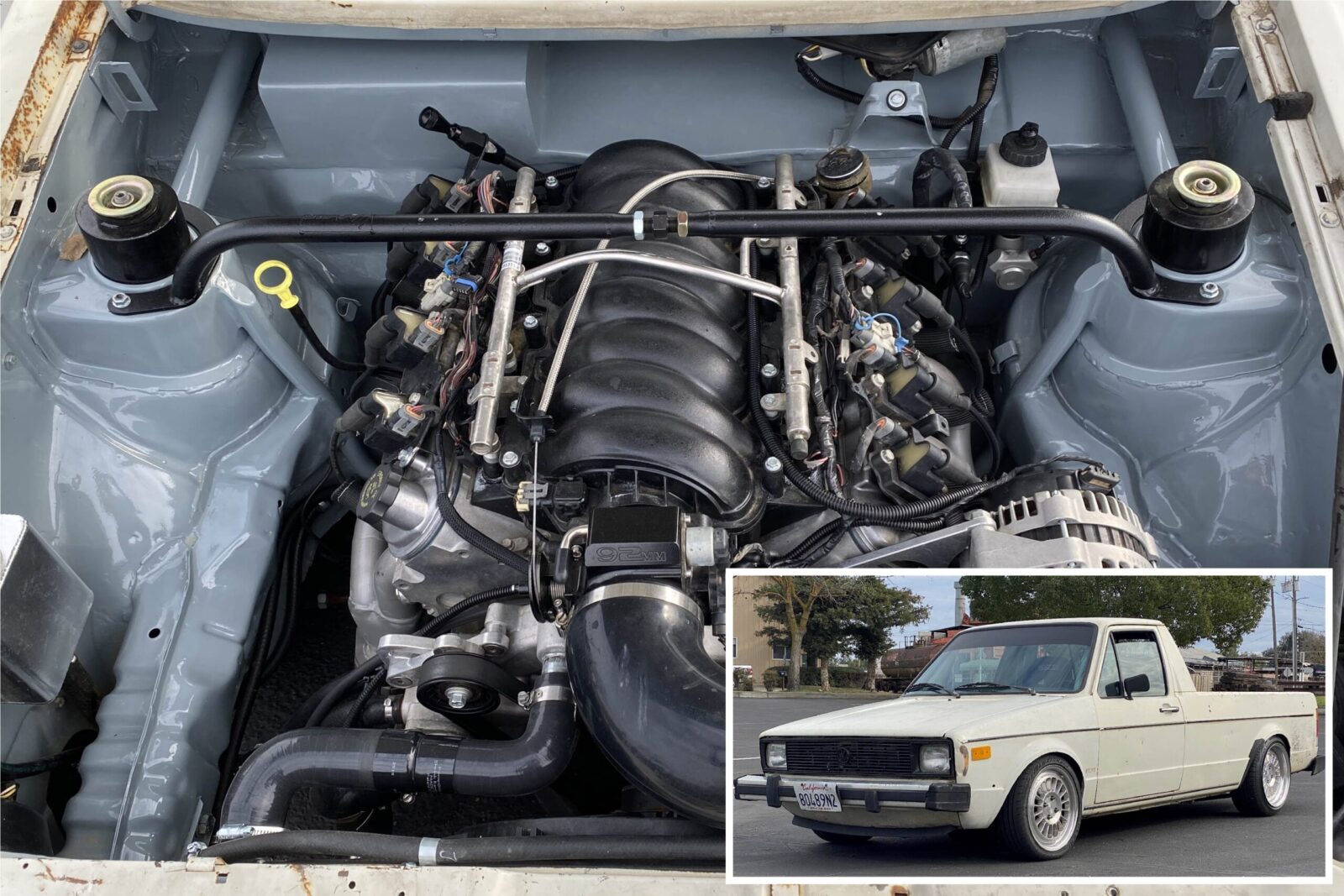 Fans of the VW Rabbit, known as the VW Golf in much of the rest of the world, as an unusual group of people at the best of times. They’re among the most dedicated car people you’ll meet and you’ll find active communities of them in almost every country in the world.

When it left the factory this Rabbit pickup, known as a “Caddy”, was powered by an economical 1.7 litre four-cylinder engine, making it ideal for tradespeople who needed to carry tools and equipment without the expense of running a full-sized pickup truck.

Unlike the regular front wheel drive Rabbit with its relatively small engine and punchy handling, the car you see here has been comprehensively rebuilt into a rear wheel drive behemoth with over 366 rwhp. Yes you read that right. This car that weighs exactly as much as a shopping cart half full of empty aluminum cans has 366 rear wheel horsepower. It also has 351 lb ft of torque. 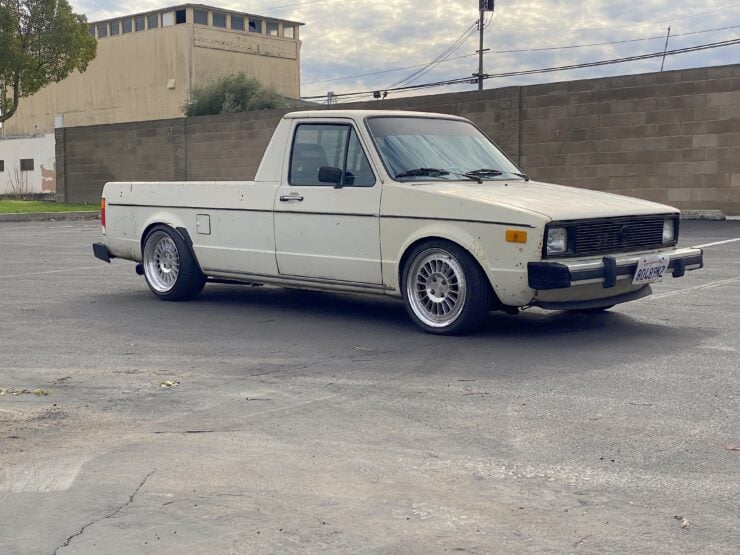 Above Image: The exterior of the car has been kept as unassuming as possible, with the exception of the wheels of course.

The project to rebuild this Rabbit took over two years, no one is entirely sure how much it cost but whatever the final bill was, it included a 6.0 litre “LS” LQ4 from a 2001 Chevrolet 2500 Silverado with upgrades to take it from 300 hp and 360 lb ft of torque to where it is today.

This engine was bolted to a GM 4l80e transmission, which sends power back to a narrowed Ford Explorer 8.8 rear end which has been drilled to 4×100.

Of course, putting all that power through a Rabbit unibody called for some additional strengthening, so longitudinal twist was controlled via “Caltrac” bars mounted at the rear, a custom cage made of 1.5 DOM tubing, and plates that extend forward to the strut towers.

As you would expect, brakes have been upgraded to better handle the new power output, the front end now sports VW Golf MK3 calipers and rotors with green stuff pads with an Audi large bore master cylinder and Wilwood prop valve higher up the hydraulics chain. In the rear the original Ford Explorer drums were deemed more than capable given the low weight over the rear axle. 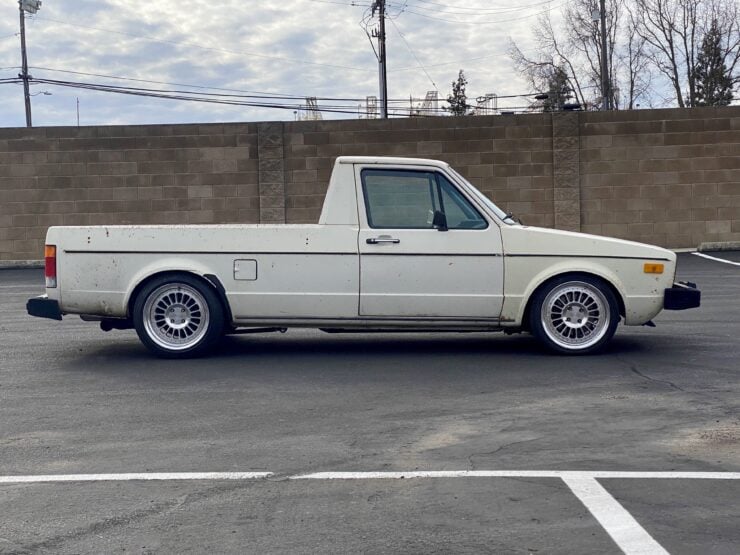 Above Image: The pickup bed remains 100% usable, in fact loading it up would likely help with traction.

During the build the exterior/body of the Rabbit was deliberately left a little scruffy giving it an almost sleeper-like appeal.

Of course the burble from that V8 and the sight of the car sitting low on those Jongbloed racing wheels will give more than enough indication as to the hidden performance ability of the car.

The car is selling out of Modesto, California through the new Radwood auction website, it’s called “RAD For Sale” and it was developed to sell Radwood suitable vehicles to fans of the rapidly growing global community.

If you’d like to read more about this Rabbit or place a bit you can click here to visit the listing. At the time of writing there are still 4 days left to bid, and the bidding currently sits at $8,000 USD. 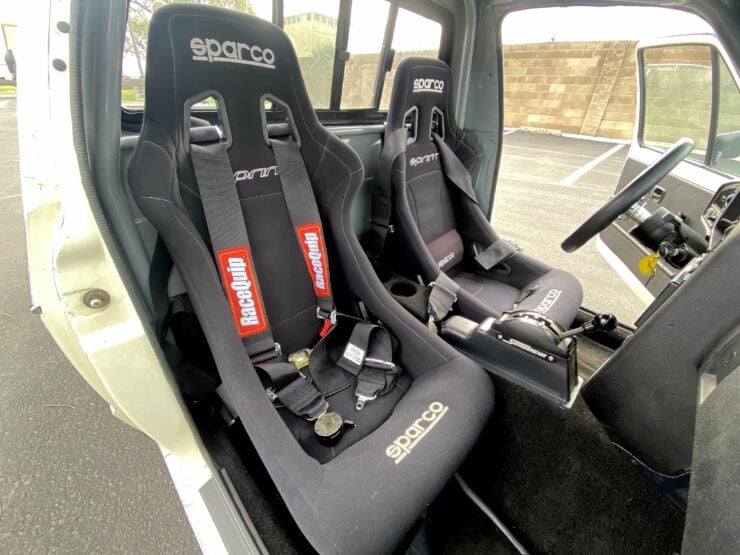 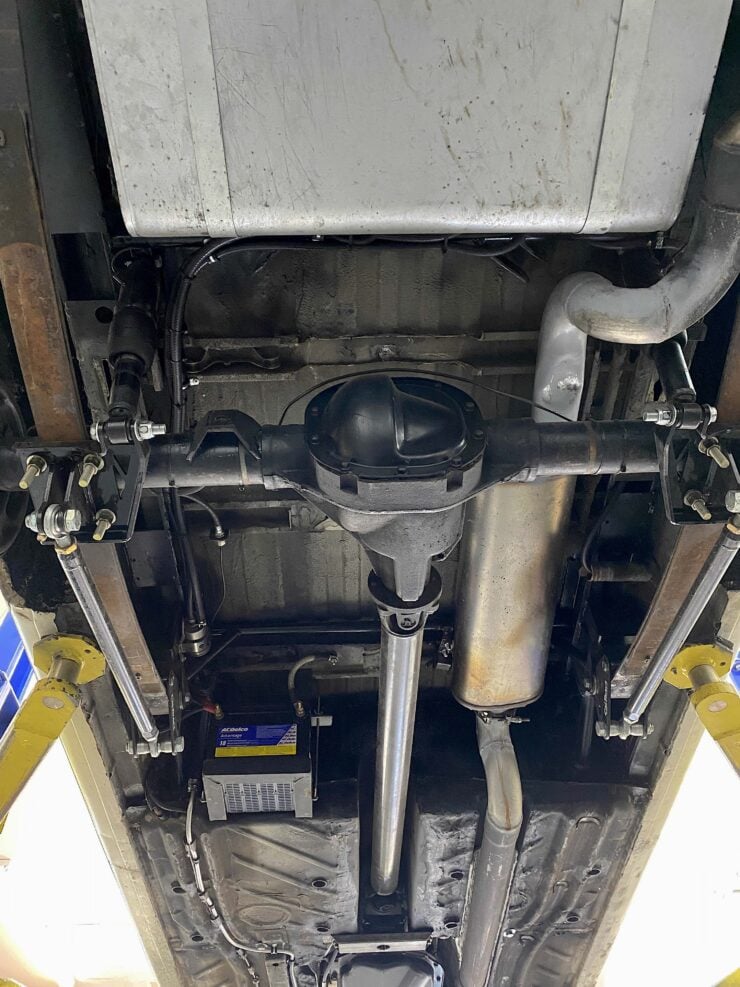 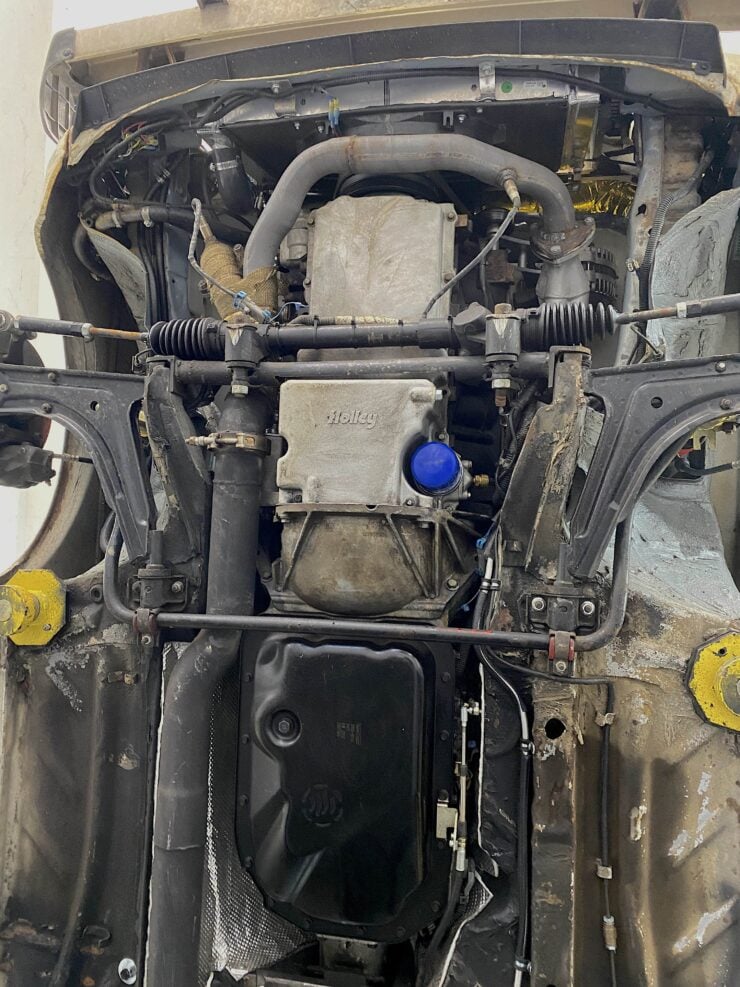 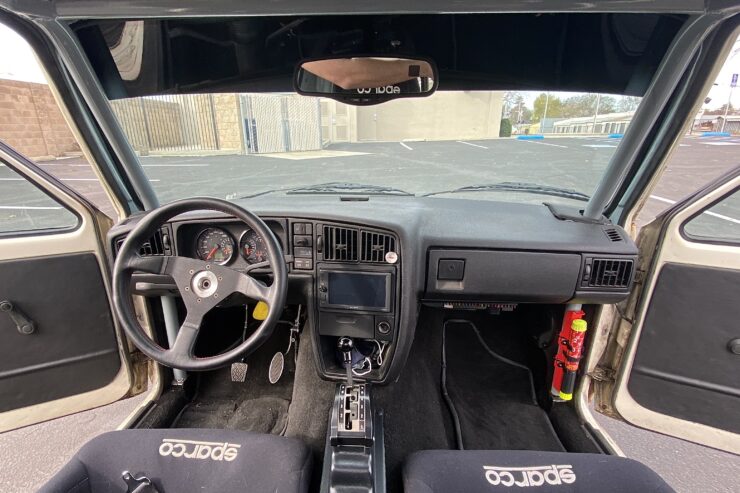 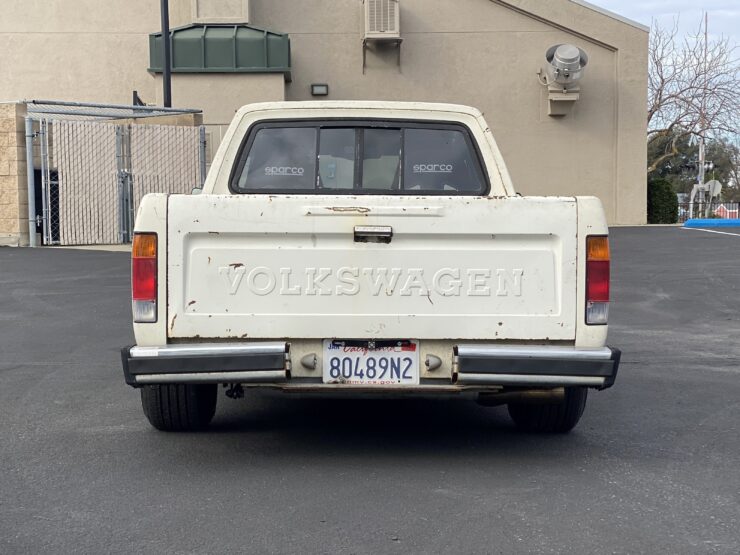 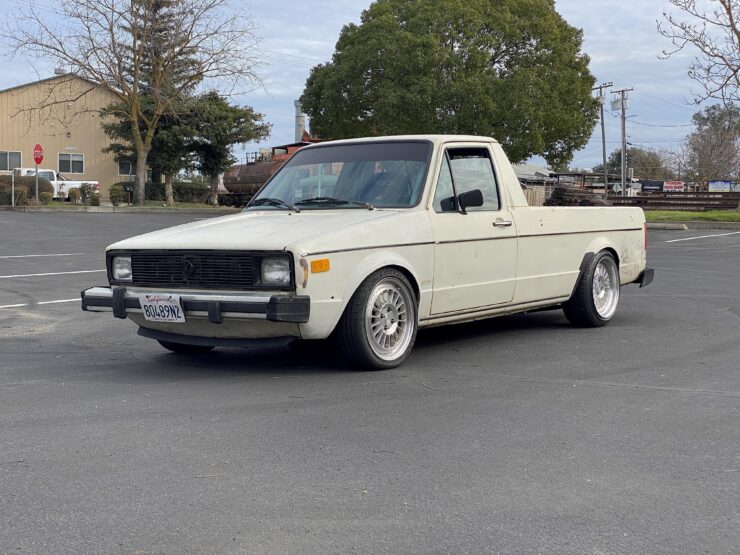 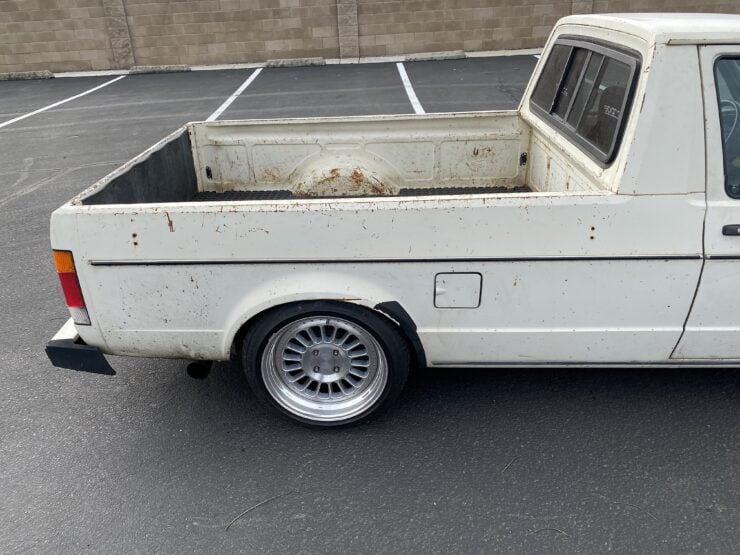 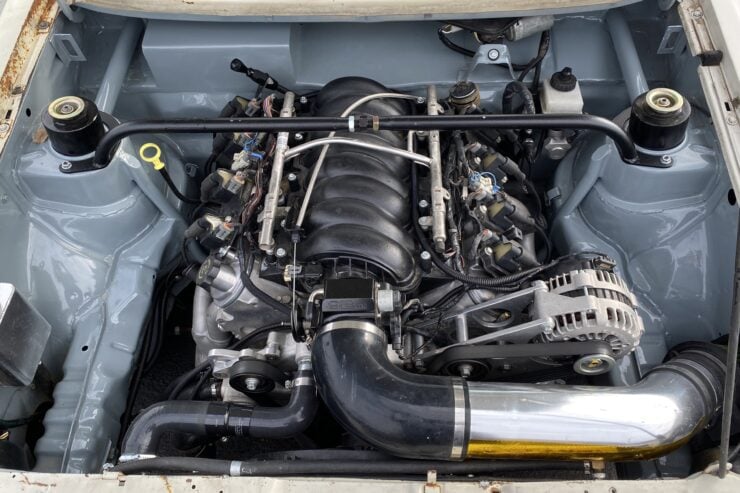 Images courtesy of RAD For Sale

This 1971 Ferrari 365 GTS/4 Daytona Spider has a fascinating history – it belonged to Sydney Pollack for a number of years in the 1970s,…